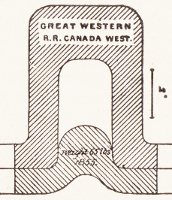 Before every engine trots the ghost of a superseded horse.
H.G. Wells


The idea for this post originated from an interesting three-page document from archive.org summarizing the process used during the Grand Trunk's conversion of its single-tracked main line to Standard Gauge. However, when one starts researching, many more interesting tangents develop and a five-image post turns into a somewhat longer effort.

In hindsight, many things could have been done differently to avoid the series of financial errors and assorted disasters which culminated in the final bankruptcy of the Grand Trunk Railway.

Rail enthusiasts generally have an overriding interest in motive power. I have included a few photos of mid-1800s GTR power to evoke 'the era'. Imagine how 'cutting edge' this technology was back in the stage coach, sailing ship and early steamship era. By the same token, one can imagine all the capacity and reliability limits the railway pioneers were facing with their early motive power, only 20 years into Canada's railway era.

Considering the dominant land transportation of the day - horses dragging a vehicle on various high-friction and undulating roads - the railway was soon to become 'a magic carpet made of steel'. In Canada, some technical refinement was necessary before this could become reality.

As you already know, the other side of 'low friction' is 'low adhesion' - the railway right-of-way had to be professionally engineered to limit grades. As you also already know, Canada's earliest railways were built mainly with human and animal muscle power and primitive explosives.

Building a reasonable Rail Way was expensive enough ... without having to rebuild it because of technological problems or errors. And without kleptocratic opportunists siphoning off 'mobile, sensitive and scarce' capital to line their own pockets ... during the early phases of raising capital ... and during construction.

The following passages come from: 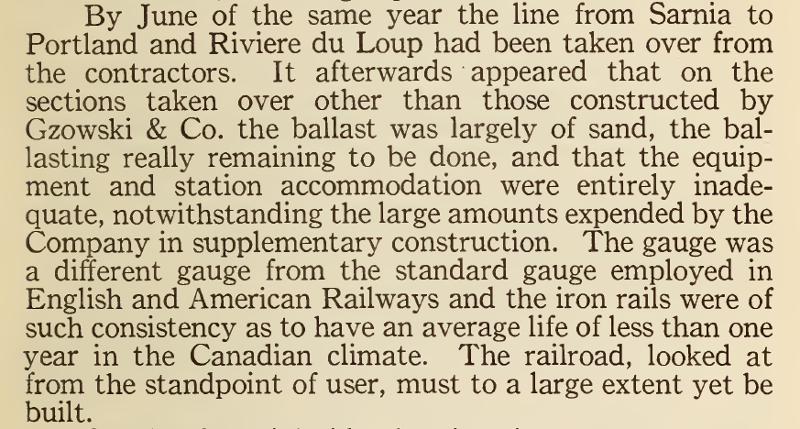 A decade later, coming from the position of Chairman of the Great Western Railway (the English GWR), Richard Potter 1817-1892, a British lawyer and businessman became Grand Trunk President from 1869 until 1876. He studied and then dealt decisively with a number of issues - financial and practical - which needed resolving. He received little thanks for his efforts. 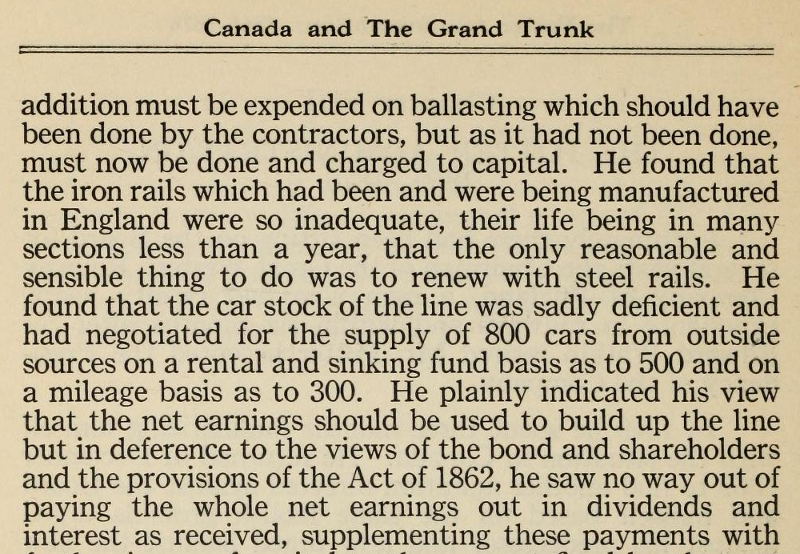 A Canadian 'innovation' - Provincial Gauge - had cost the GTR a lot of money.

Here is Canada's railway network in 1860.


It is striking how the 1860 railway network is almost exclusively used to link bodies of water - the 'portage railways' were becoming longer and longer. An exception to this is the Grand Trunk - which parallels the St Lawrence River.

One Canadian writer of the period suggested that British canals were little more than enlarged ditches compared to the waterways of Canada. For early Canadian bulk commodities for export ... such as timber and grains ... railways operating in competition with water had no hope of competing on capacity or price with natural waterways and/or canals. The period of the winter waterway freeze-up simply could not compensate for the railways' limited haulage capacity and relatively high operating costs.

The Debate About Gauge


If you have ever watched YouTube videos showing Russian railways (with a gauge of 1520 mm - almost 5 feet) or Indian railways (1676 mm - 5.5 feet) it is easy to see that our Standard Gauge often leaves something to be desired with the potential to run today's best high capacity locomotives and rolling stock.

It would not have been possible to finance many of North America's railways if the system had used a broader gauge in the 1800s. The extra initial cost of wider rock cuts and fills, more substantial bridges, heavier rail and more powerful motive power would have made many wilderness railway lines unaffordable. But ... perhaps this might have been a good thing ... as the Canadian network of the early 1900s would not have been as overbuilt as a result.

An extreme case of broad gauge (above) is the Great Western Railway of England - also known as God's Wonderful Railway. Here, its 7-foot gauge is being converted to Standard Gauge in May 1872. The line involved was from Gloucester to South Wales - about 500 miles of track, including double track and sidings which were all converted in that operation.

Here is the Great Western Railway of Canada at Paris Jct in 1860.
The Great Western converted to Standard Gauge between 1870 and 1873.
It was absorbed by the Grand Trunk in 1882.

The stub in the foreground seems to be broader.
Notice the turntable at the left, possibly with stock cars nearby.
There are raised switch targets/lamps.
The switchtender's cabin may be equipped with a telegraph.
The engineer stands at ground level with his oil can.
Of course, the fuel is wood and the locomotive has many interesting details.

For a post dealing primarily with Canadian track hardware and gauge before 1870 ...
it was extremely difficult to find any photographs displaying typical track structure well.
... Particularly of the Grand Trunk before conversion to Standard Gauge.

In many cases, trains were pulled across by a special lightweight Great Western locomotive ...
which I think is shown here.


Here are three Grand Trunk locomotive photos - two before regauging and one after. They come from a particularly interesting edition of the publication noted. Omer Lavallee provided an overall corporate history of the Grand Trunk's development and its subsidiaries. Raymond Corley discussed motive power acquisitions ... and he and William Edson provided a full list of all Grand Trunk power - through its five renumberings.


The Trevithick - 209 was the first locomotive built at the GTR's own shops at Point St Charles in May 1859. It was off the roster by 1874. It was the only locomotive of its class and speculation is that it is the namesake of the gentleman by the first driver. This photo is a favourite of CNR histories and generic railway history 'books by the pound'.


These two Provincial Gauge locomotives participated in the regauging activities, and you'll find their numbers in the project document near the end of this post.

Standard Gauge GTR power is the Portland 1873 product, Eng 377.
The fuel is now coal (with wood kindling) and the track hardware is what you'd expect.

... so many theories ... so many opinions ...
At the very end, watch for John A Macdonald's participation in the Provincial Gauge error. 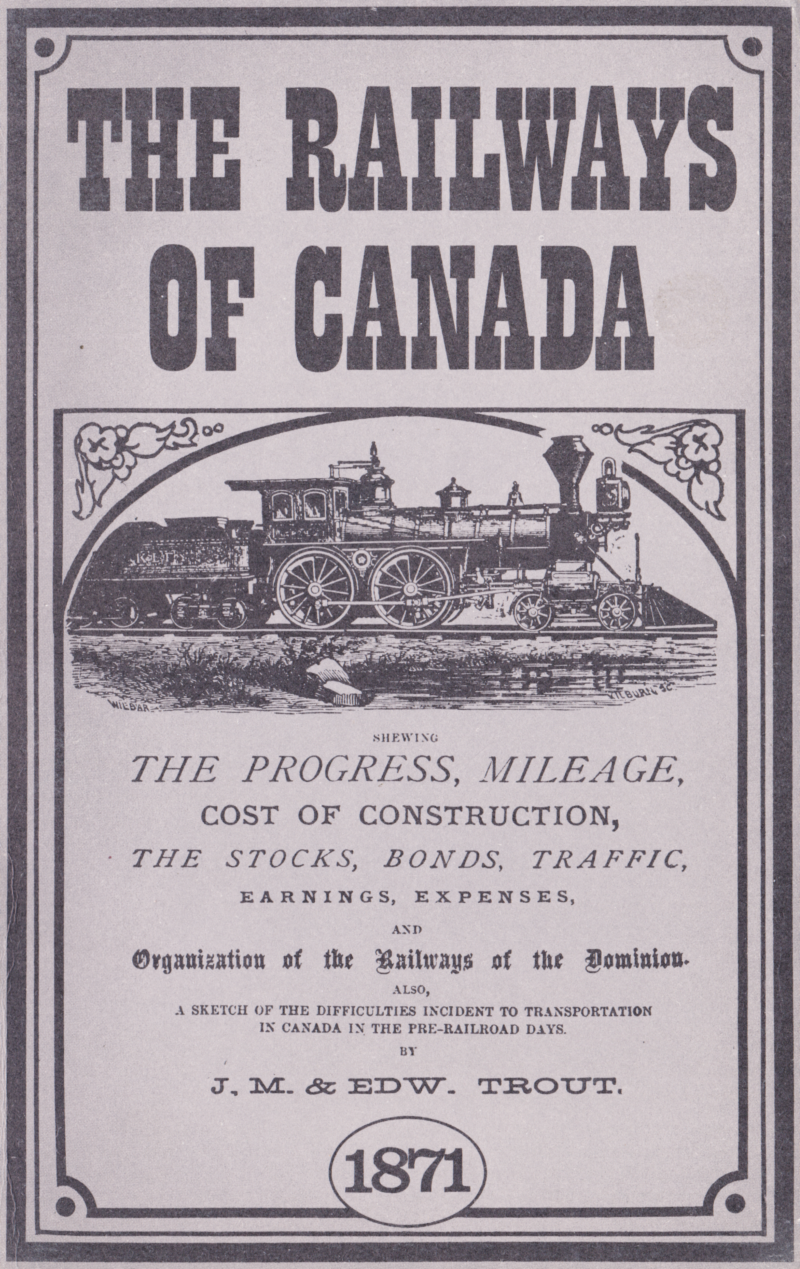 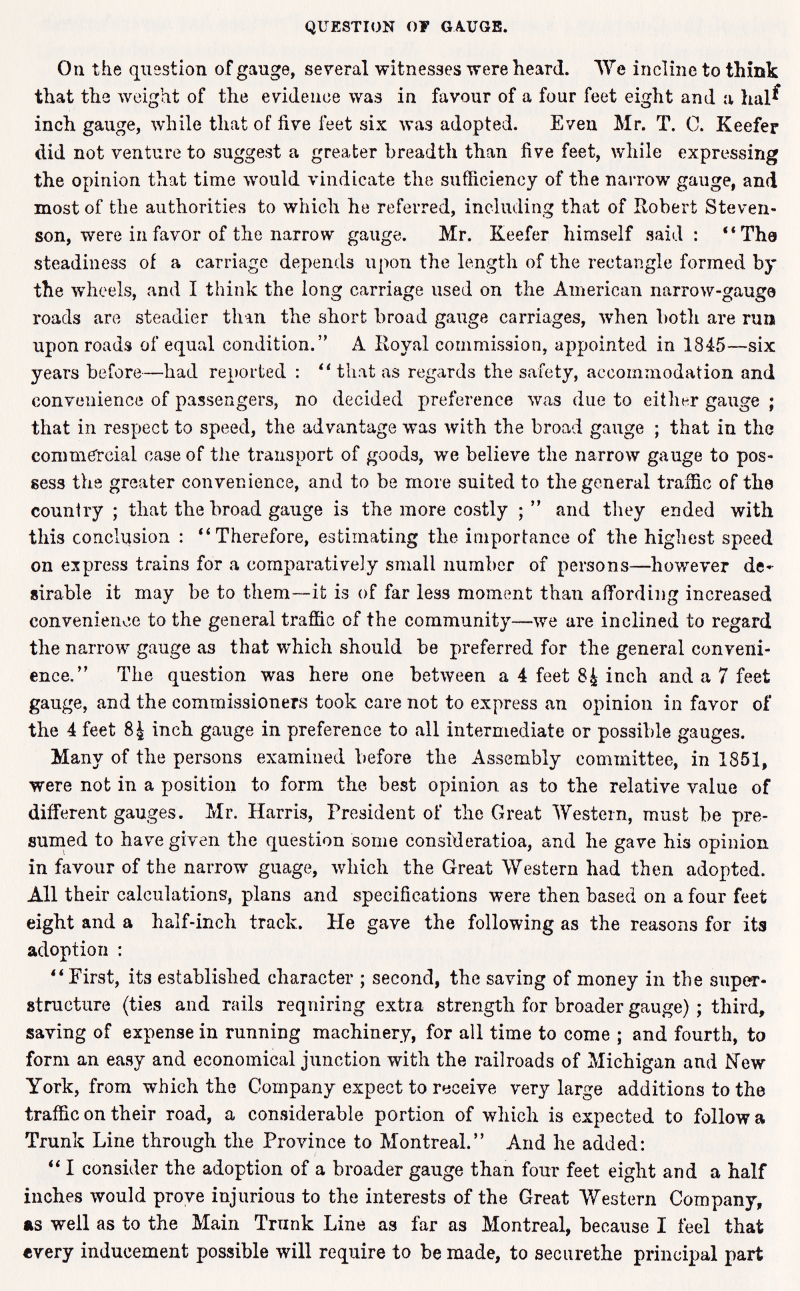 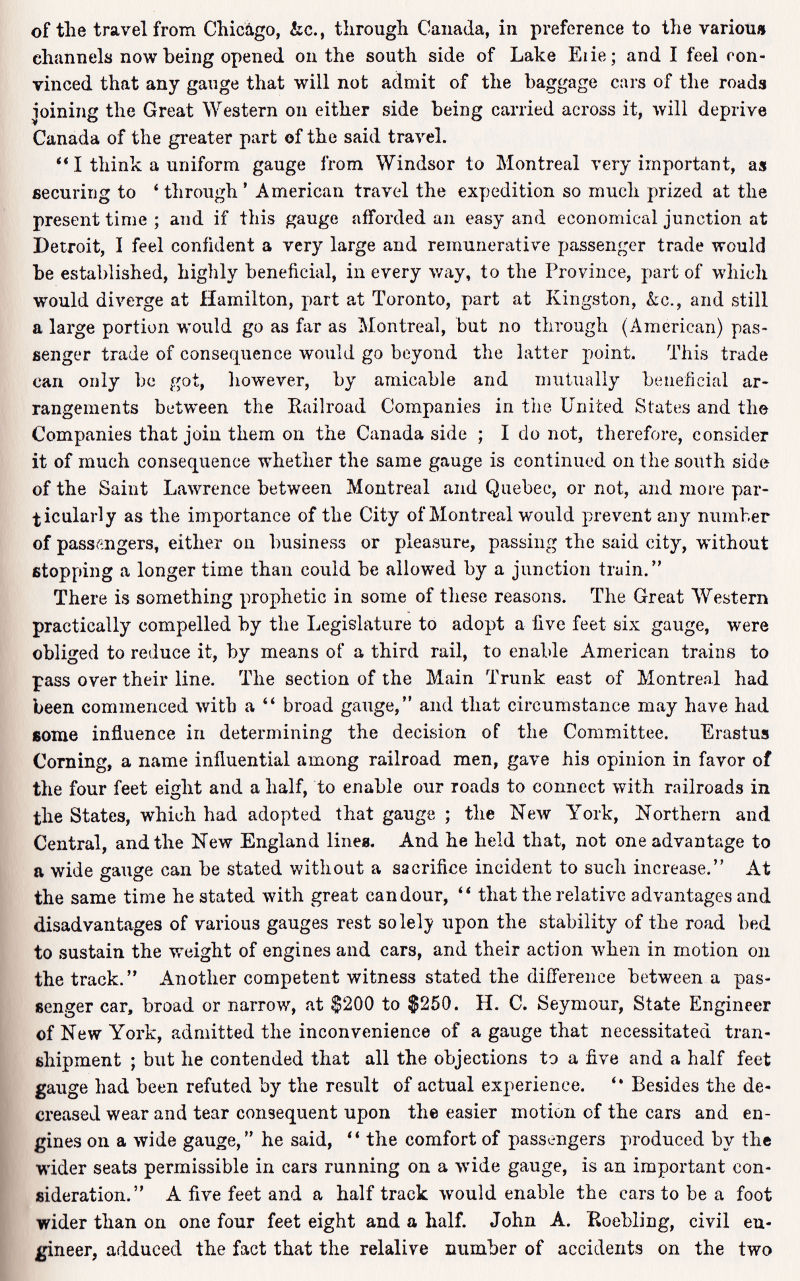 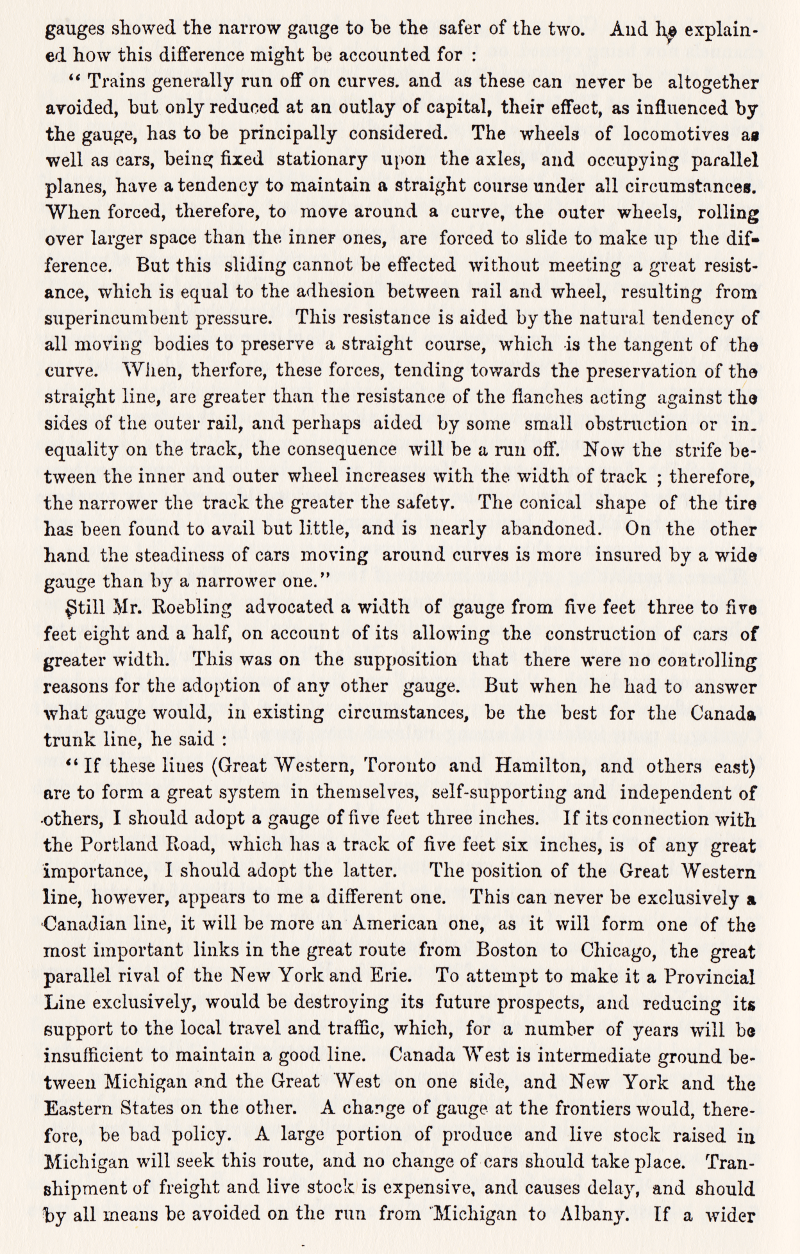 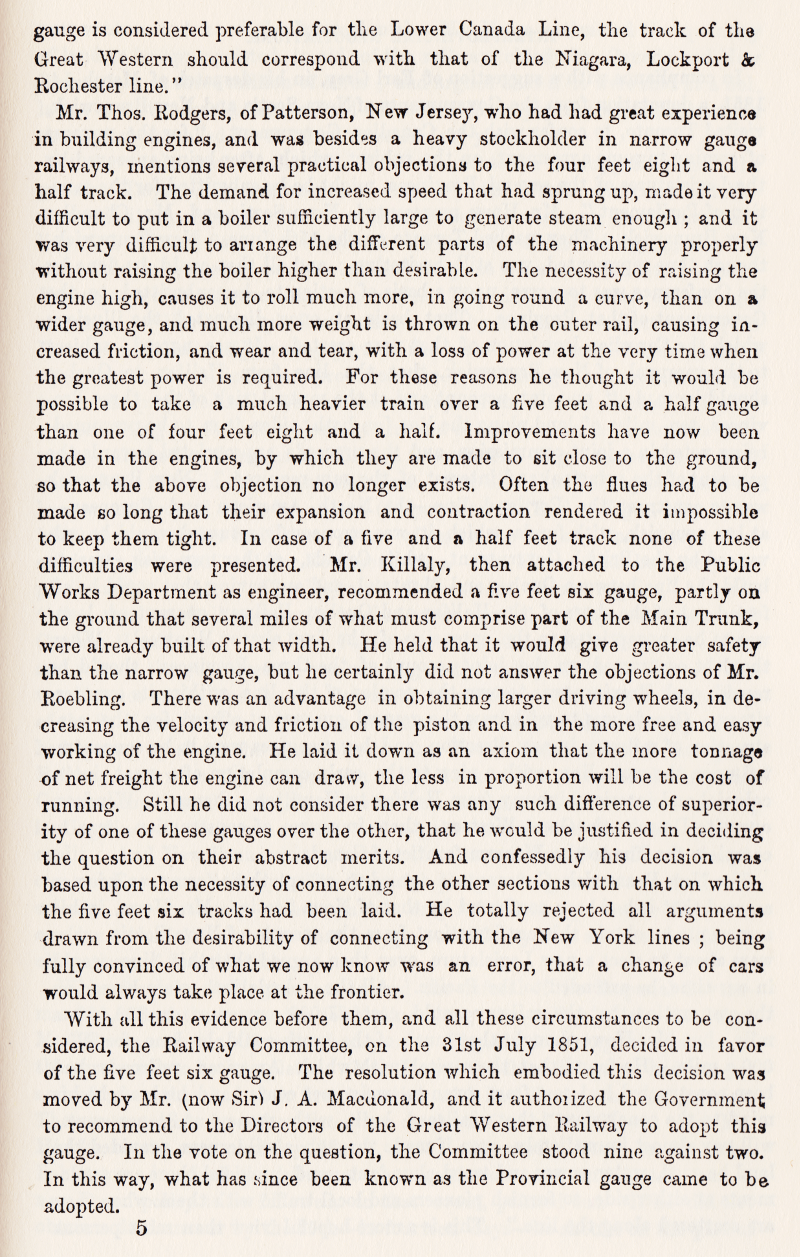 
This commentary on track gauge comes from civil engineer Thomas Coltrin Keefer's (1821-1915) essay Travel and Transportation - originally published in 1863. TC Keefer sited (apparently without much credit) the Victoria Bridge. He almost participated in the Grand Trunk Railway project and was frustrated in his life-long desire to lay out a Canadian railway. His single most notable engineering project was the design of Montreal's civic waterworks. He had a broad range of transportation, economics and engineering interests and writings.

Map of the Grand Trunk and Its Gauges

... Showing the full scope of GTW's gauge issue, particularly as it consolidated smaller lines.
This is Lavallee's map from the same source as the Spitfire and Trevithick photos.
The map was printed across the gutter of the book.

This is how they organized the change of gauge ... 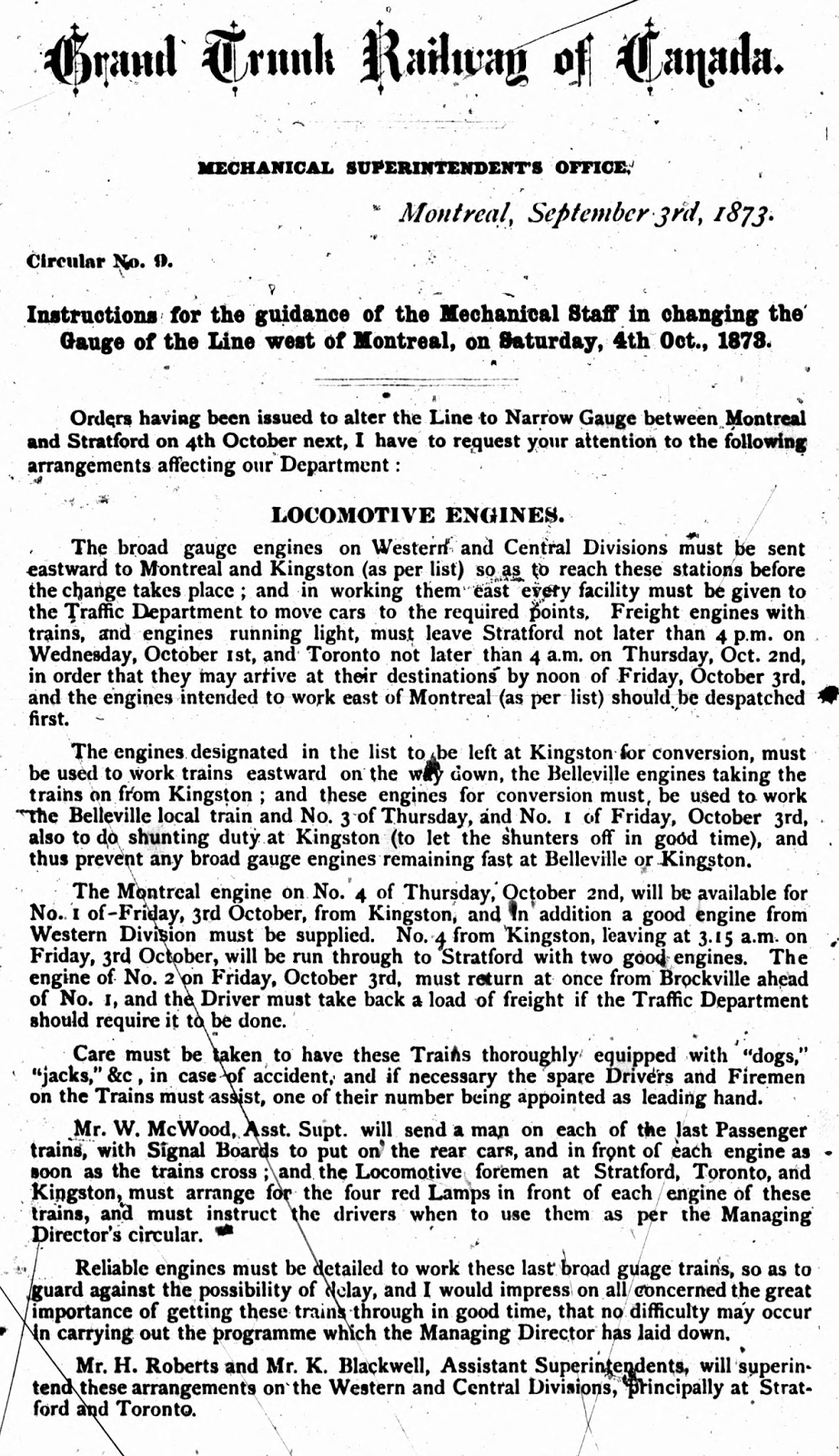 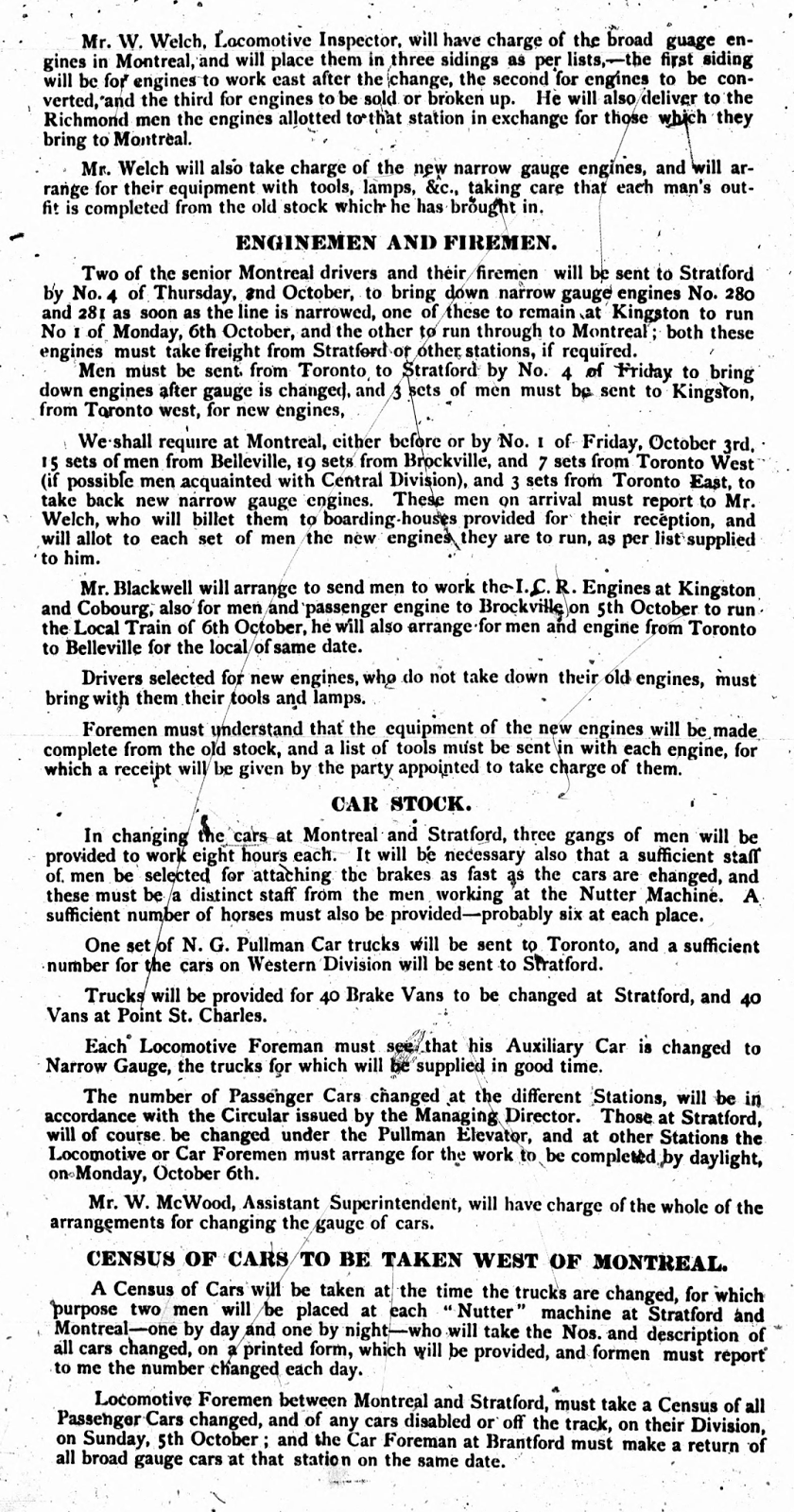 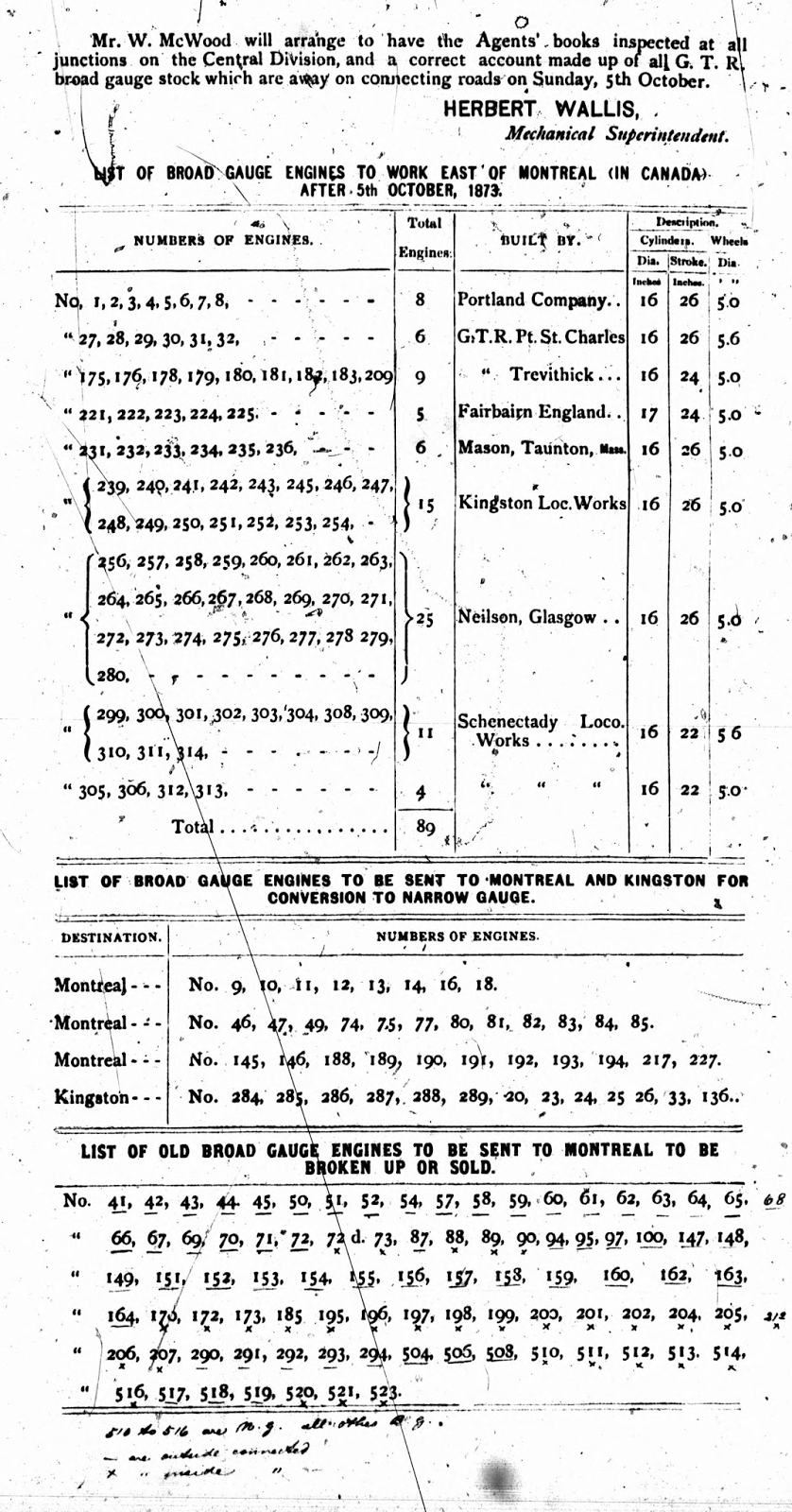 In advance of the change of gauge, this advertisement was placed.


Sacred to the memory of those of us with links to the region ... was the last bastion of Provincial Gauge. This was the insular, 12 mile, portage railway, the Carillon and Grenville. Its Birkenhead, Canada Works, engine began its career with the Grand Trunk and operated on the C&G from about 1870 until 1910. Here it is passing over a stub switch.


As old as the Grand Trunk locomotive Trevithick is this illustrated guide
which my great-grandfather purchased secondhand.

The second pair of images shows the layout of canals and railways around Montreal.
The new single-tracked Grand Trunk Railway can be seen.

(As usual, the larger image was cut to work around the Google algorithm size limits.)