Port of Vancouver (Vancouver Harbour) in 1923 This federal publication provides data for both sea and inland harbours. While basic maps are provided, it is assumed that the user has access to the appropriate nautical charts. The photographs come from this publication.

Included below, from other sources, are maps from 1915 and 1927. The latter is a bird's eye view map with many local features labelled - it is the last image in this post.

As always, it is often necessary to run the slider bar to the right to see the entirety of large images.

In the mid-1980s, we were visiting the Harbourfront Antique Market and I had just selected the shell of an electric switchlamp (2 green & 2 red Fresnel lenses with an insulated port for a 'railway-weight' cable) ... because I thought it would be relaxing to carry it back to the Royal York, easy to put into a suitcase and fun to transport back home by train. The dealer said he hadn't seen one like it before, and I have not since.

I'm sure he was able to 'read' people pretty well, but I tried not to react to what I was seeing.

' ... Those are the routing instructions for the Royal Train.'

'Oh ... ' I tried to say this as nonchalantly as possible, and pretended to look for something which made them special. I think he wanted $30 for them - about $70 today.

From within a very large crowd at Dominion Square, my grandfather had seen King George VI and Queen Elizabeth on the balcony of the Windsor Hotel in Montreal. Later LC Gagnon and his mother watched the Royal Train pass Westmount station - with the King and Queen on the rear platform. The photos from the 1939 Canadian Geographic - such as the photo below - were well known to us growing up.

Under the Railway Technology & Systems radio button (above) you'll find a series done in 2019 about the CPR-conducted trip west. Burnout occurred before I could attempt to describe the CNR return trip - even though I wanted to finally examine these orders and determine if they were likely to be genuine.

A genuine set of fake Royal Train orders should be yellow, with a green clearance form on top and a staple holding everything together. Certainly a sheaf of winter slow orders for the Heron Bay Sub were presented in this form in 1977 ...

However, LC Gagnon's retained and practiced 'office procedures' from his time in Freight- and later Passenger Receipts at Windsor station in the mid-1950s suggested that the whole railway ran on straight pins and string. (During the Dirty Thirties, neither railway would be buying a new-fangled 'stapler' for every operator up and down the line ... 'They'll all be stolen!' ... And then the Travelling Auditors would have to visit every station ... to grill every station agent.) ... With straight pins, you just pull the pin out to remove a cancelled order, insert a new order exactly where you want it, and replace the pin.

Who knows what kind of protocols they were using in 1939 for this train? (Adolf Hungry Wolf included a long and fascinating list of operating preparation and practices for the Royal Train in one of his early books and I should provide some of those in the near future.) On board this train, it seems unlikely that the conductor was alone in his set of four facing seats with his rules, references and paperwork - just doing the usual 'conducting' - without Company managers hovering around, or without any kind of government, RCMP or military liaison. The train orders wouldn't be in his jacket pocket as 'his little secret', while the engineer was entrusted with navigating the road ahead.

Prime Minister Mackenzie King was essentially the 'host' and tour operator for almost the entire Royal Tour. He'd often pop off the train, a few cars from the tailend, and scoot back to the observation car to ensure that all went well if the Royal Couple chose to detrain at a division point.

The train orders which I have owned for almost half of their lives are not particularly glamourous and they don't commemorate special stops or special events during the 'public day'. They represent good business-like train operations.

... You're on a steam fan trip and it's the end of the day. You've descended and climbed the car steps a number of times for runpasts, you've waited a few times while the engine was being serviced, you've stuck your head out vestibule doors with the smell of creosote, hot brake shoes and sulphur in the buffeting wind, you've been jostled by hundreds of excited people. You're hot, tired and sticky and ready to go home. You'll be content when the day is over - everything has gone well. There are no more scheduled stops - you're staying inside the train now - and it really seems to be making good time. The engine is running faster than it has all day and the whistling seems continuous as the miles fly by.

... I can't accurately synthesize the experience of the King and Queen on the evening of Tuesday June 6 - the day before they crossed the border at Niagara Falls. They were acting on an unprecedented British and Canadian governmental request. Their developing mission: To inspire Canadians, Americans and Newfoundlanders to resolutely support Britain through the impending disaster Europe was expected to experience.

Below is a rather extensive presentation about June 6, 1939 - the day on which those train orders took effect.

Above: At London on the morning of June 7.
Below: A CNR annual report from 1942 with an airbrushed photo from this series of photos taken at London. Notice that the number plate of the 6400 is affixed to the retractable coupler cover. The fireman and engineman are posing in pristine white coveralls. The following pages come from an officially-issued book which outlines the program for the entire trip. I purchased this at an antique store in Camden East, Ontario. It was owned by someone who lived in Wallaceburg (near Chatham, Ontario). So, by coincidence, this person may have participated in the Tour on June 6 as well.
For the Canadian and international press travelling with the Tour, the book provided a wealth of background information on the passing countryside to help fill out their stories - and Poole Brothers maps of the route.
For local participants, it provided an outline of the program on the day the Tour was to visit their town ... and acted as a souvenir of thanks for their participation. Sadly, the included photographs are bland, standard railway tourism shots which everyone has already seen. 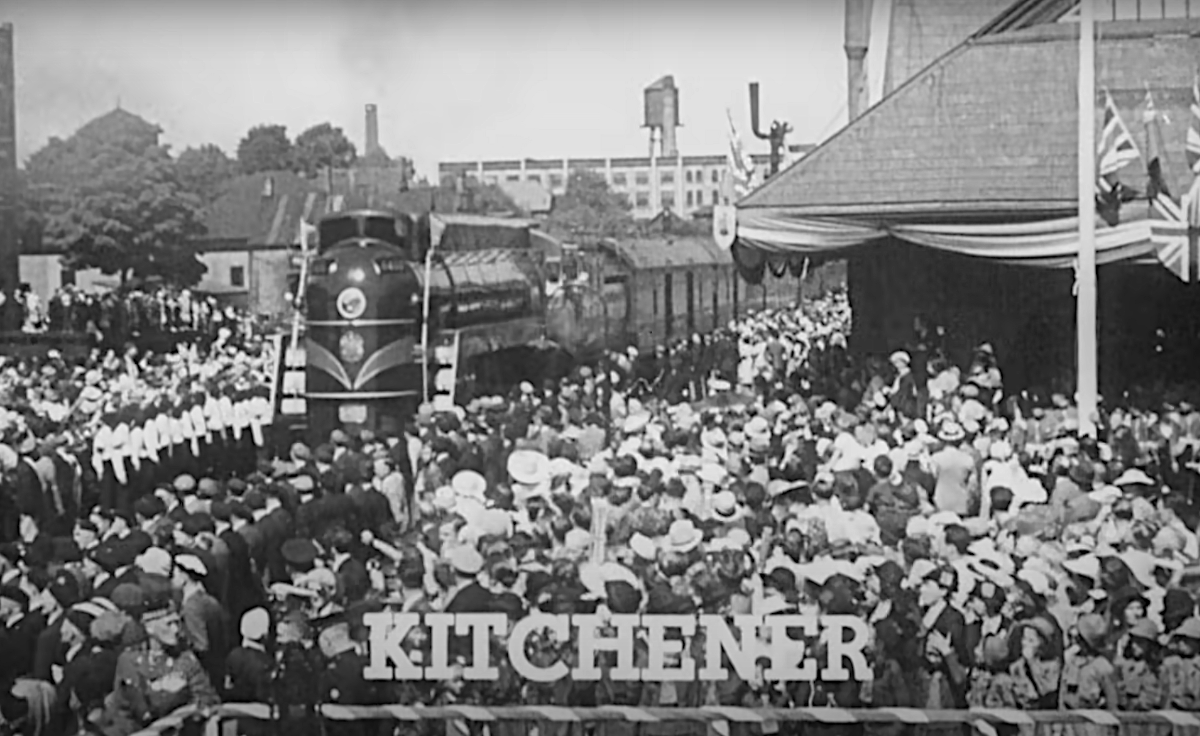 This image comes from a contemporary 90 minute film of the entire Tour (except for the visit to Newfoundland),
posted to YouTube by Library and Archives Canada.
I have linked to it at the end of this post.
Above and below: Kitchener, Ontario.
This was an important stop for Prime Minister Mackenzie King because he was born in Berlin. 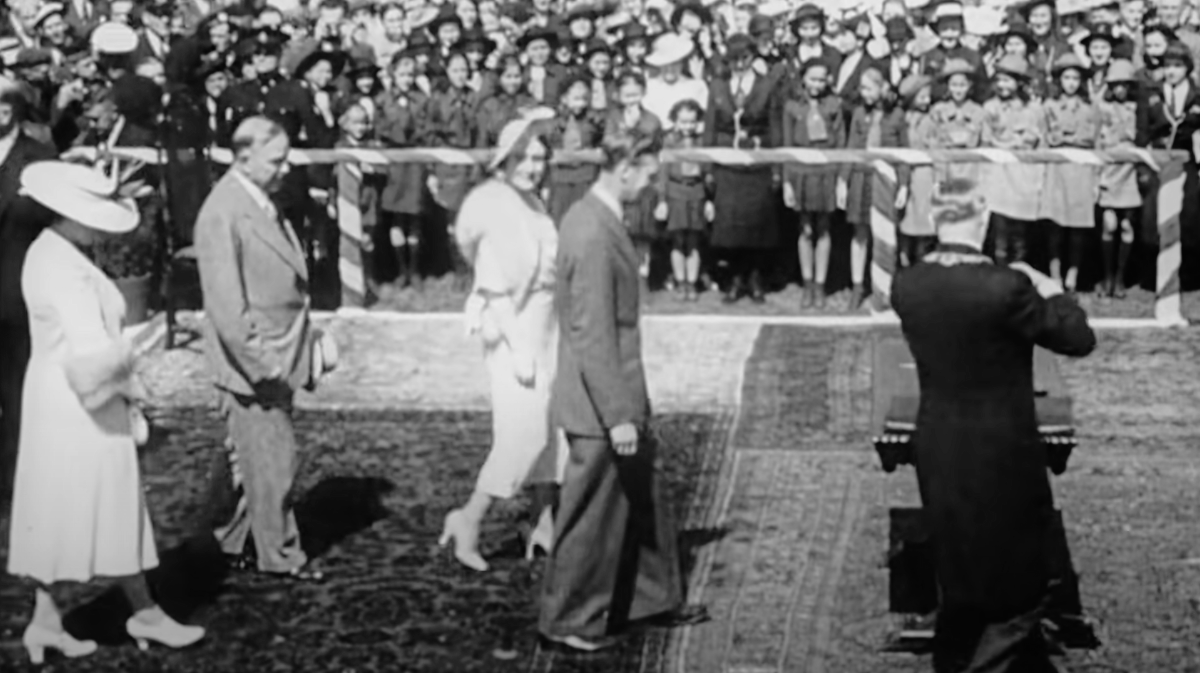 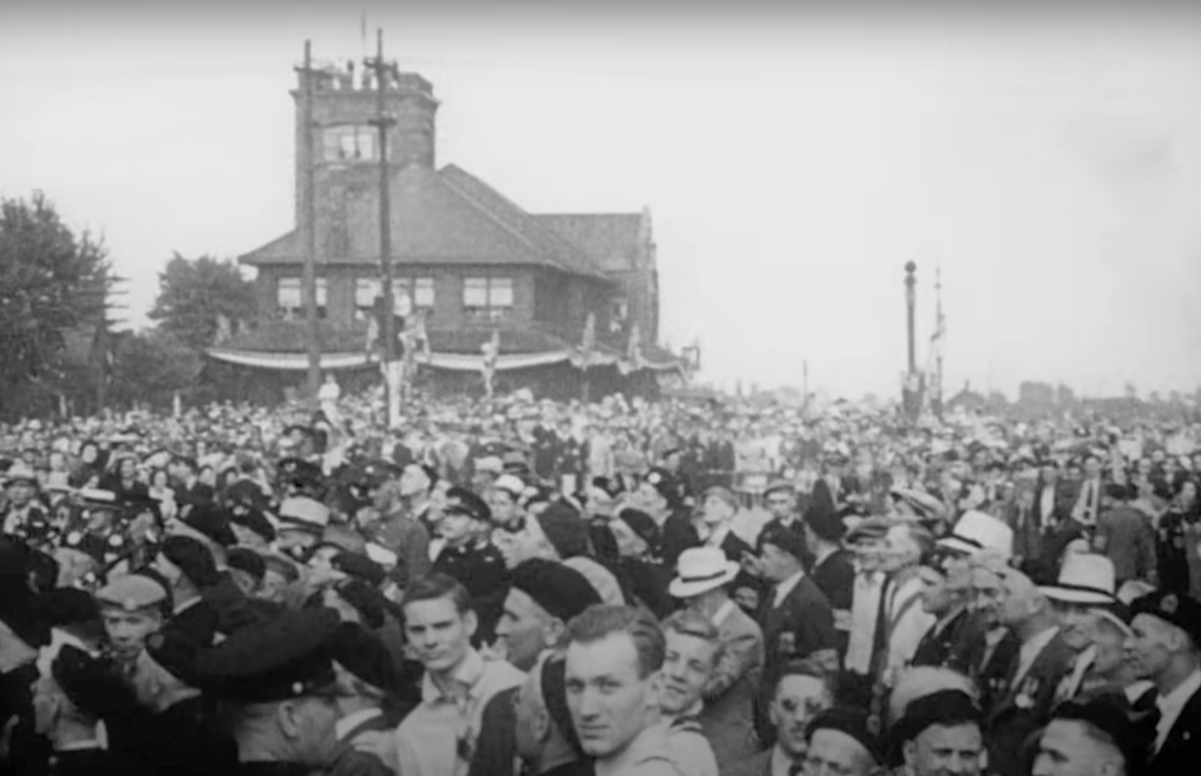 Above: The crowd at Stratford. 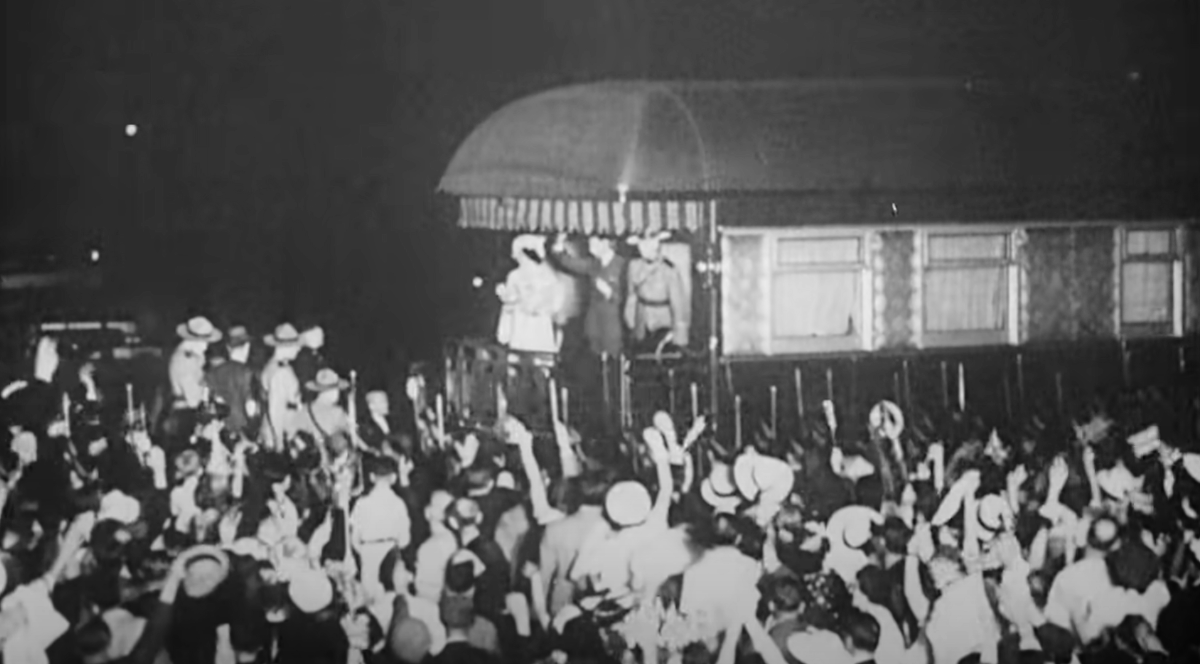 Above: Departing from Windsor for London.
The train orders. I scanned them without disturbing them in their individual plastic sheet protectors. Except for Order 259 (faint), colours/darkness of print were not altered after scanning. I believe I have put them in the most appropriate logical and/or chronological order to illustrate Conductor Ward's end-of-day run from Windsor, back to London.
Generally:
A track inspection was made after the last train passing ahead of the Pilot and Royal Trains.
Facing point switches and both switches of sidings holding traffic were spiked.
The 6401 pulled the Pilot Train transporting press and an advance team.
The 6400 followed with the Royal Train on a 30 minute block. These timetables are from the late 1950s and reflect operations at the end of steam. They are arranged so the route can be followed (and the operating features observed) from Toronto to Windsor. The trains doubled back on their route, Windsor to London, that evening.
To avoid frustrating people who like employee timetables, the complete data for all subdivisions is included (and the St Clair Tunnel Subdivision is included but it was not used by the trains).
For the sake of the completeness, the entire subdivision is provided, even if only a short segment of the subdivision was travelled. (The most extreme example is that the entire Dundas Sub is included, even though only 1.5 miles of its 1957 length would have been used by the trains.) For London, in particular, some of the Dundas Subdivision footnotes would apply to the yarding of the two trains on the night of June 6-7.
Before each subdivision timetable below, the first and last stations of the subdivision which were passed by the two trains are stated. For example:
Brampton Subdivision - Toronto to Stratford. For the evening trip (Windsor to London) reverse the route over the Chatham, Longwood and Strathroy Subdivisions.
*  *  *
Fifty years after the Tour, a journalist specializing in Canadian history did extensive research via every conceivable source to describe the experiences of Tour participants. From the experiences of the King and Queen to interesting stories of Canadians who travelled to attend an event - the account was intended to be broadly representative of the whole Tour. The genesis of the Tour idea, its preparations, the journeys across the ocean, the American visit, the visit to Newfoundland, the return to Britain and the Tour's aftermath are all described.
The description of the events for June 6 follows.
The period covered by the train orders is the very last paragraph for the day. A link to the Library and Archives Canada YouTube posting follows. A short segment on the visit to a Sudbury mine jumps to the stop at Guelph on June 6.
Reversing the video to 1:11:00 (crossing the Manitoba/Ontario border) will quickly show that the CNR choice of 6400-class engines (with their NRC-windtunnel-streamlined sheet metal covering key appliances and valves) was not universal to power the CNR segment of the Tour across Canada.
... One can think of many reasons why the CNR did not plan to engineer their own motive power PR coup like the CPR did - with the eventual success of the latter's Royal Hudson designation efforts. On the morning of Wednesday, June 7, the King and Queen begin their visit at London.