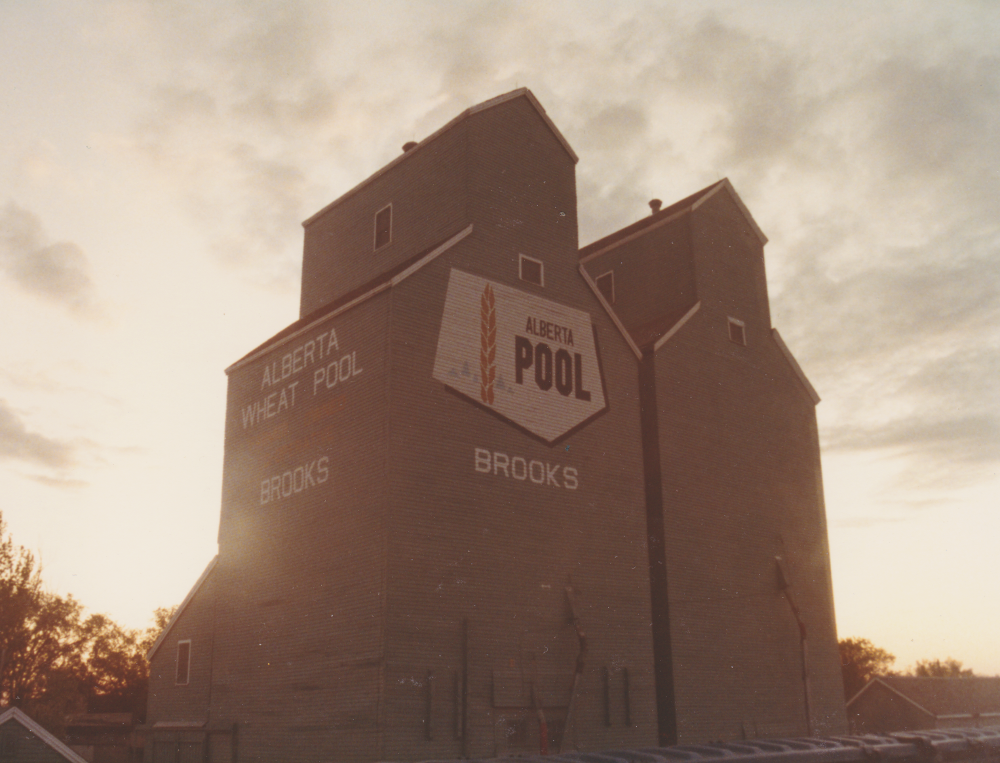 This first photo was actually taken after the following picture.
As you see, we are in Brooks, Alberta and we've had problems with the train air.

I think we're taking a signal at Brooks station - where their parking lot light is still on.
That train order signal will be gone in a few years. 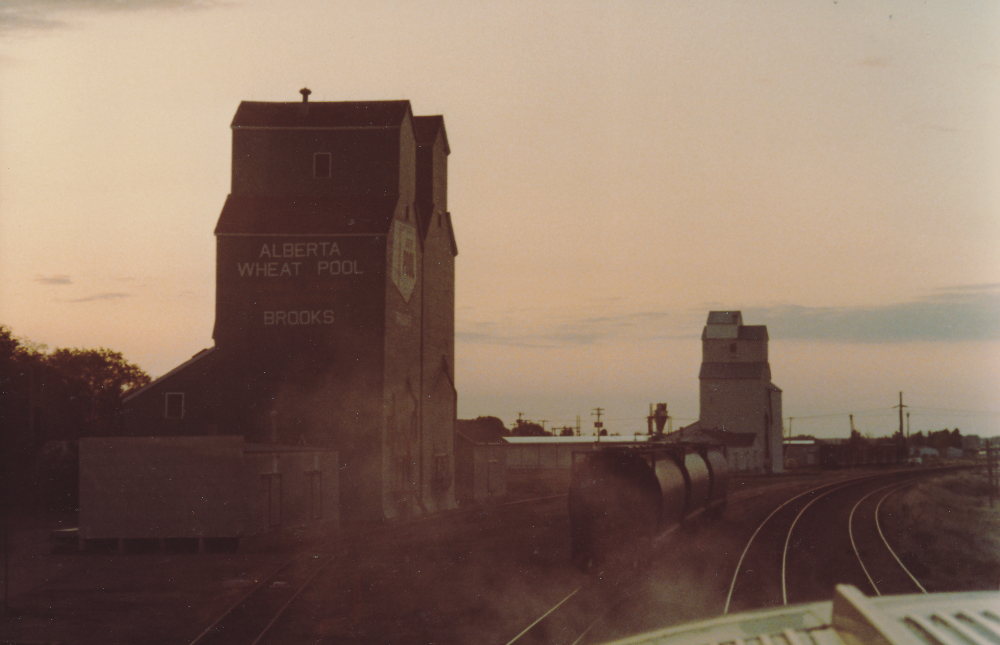 With a reflection in the rear corner of the dome, here is a better look at the Brooks elevators.

A while later, we're still moving very slowly and cautiously.
That's our Slow Approach signal.
An eastbound intermodal is waiting for us on the main track. I think this is Cassils.
Between the freight and our 'RIP track' is at least one track of white tank cars.

Later on, with running repairs made, the snow-covered foothills can be seen in the distance.
To the right, you can see three grain elevators on the horizon.
The engineer has requested a straight shot into Calgary.
He indicates the air problem is fixed temporarily,
but he is afraid to use the air in case we lose it again. 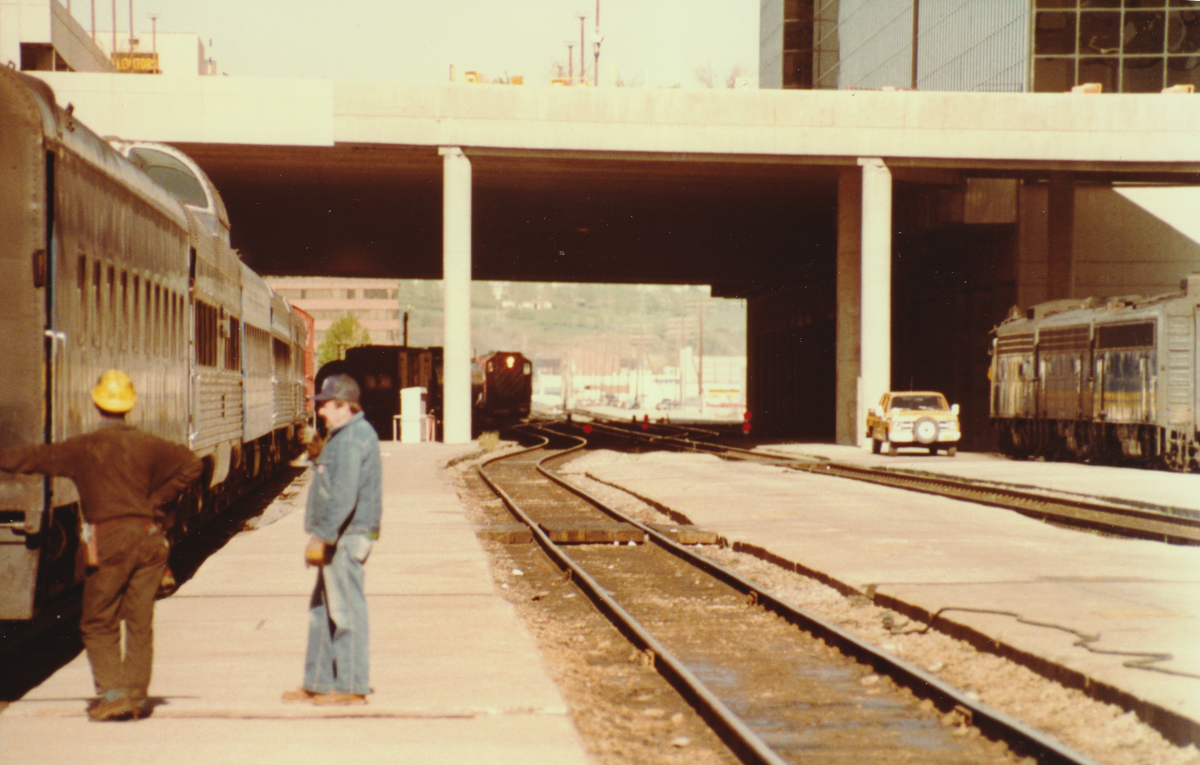 At Calgary, we again enjoy the freedom of the station platforms.
I think that is the defective car to which the carman is attending.
The switcher can be seen at the end of the cut, along with a GP9 coming with a freight movement.

Successive groups of railway employees came up the platform,
had a look at the repair
and walked away laughing.

While our presence was tolerated (the previous time we were given a switcher ride) ...
I didn't want to get too 'cute' about the repair.
I prefocused the 80-200mm lens and hoped for the best when employees were farther away. 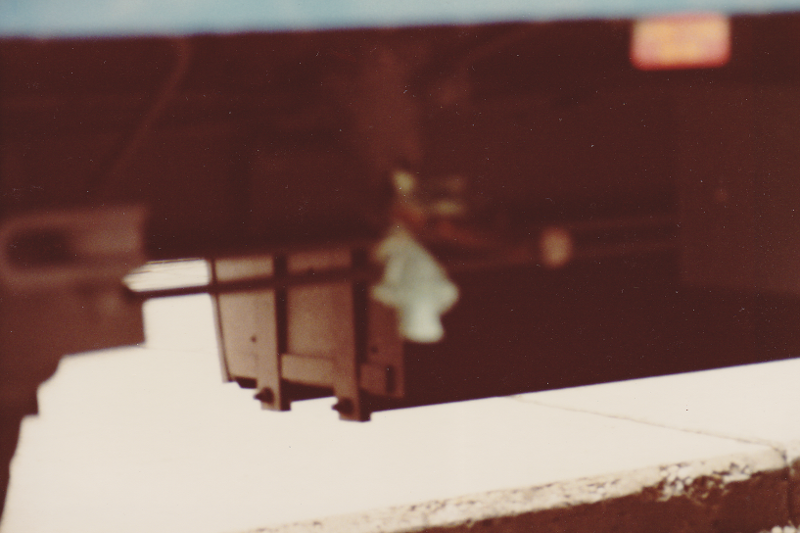 What you are supposed to see here, is a rag jammed into a leaking air brake orifice.
The rag is held in place by a broom/flag stick which has been neatly sawed off.
This is how our train got from Cassils to Calgary without setting off that car and displacing its passengers.

With my failure to focus, I don't know if the red plate indicates the location of the bleed valve.
I understood that a piece blew/fell off our ex-CNR VIA equipment back around Brooks.
We limped along somehow until we were out of the way at Cassils.
The crew members were justifiably proud of their ingenuity. 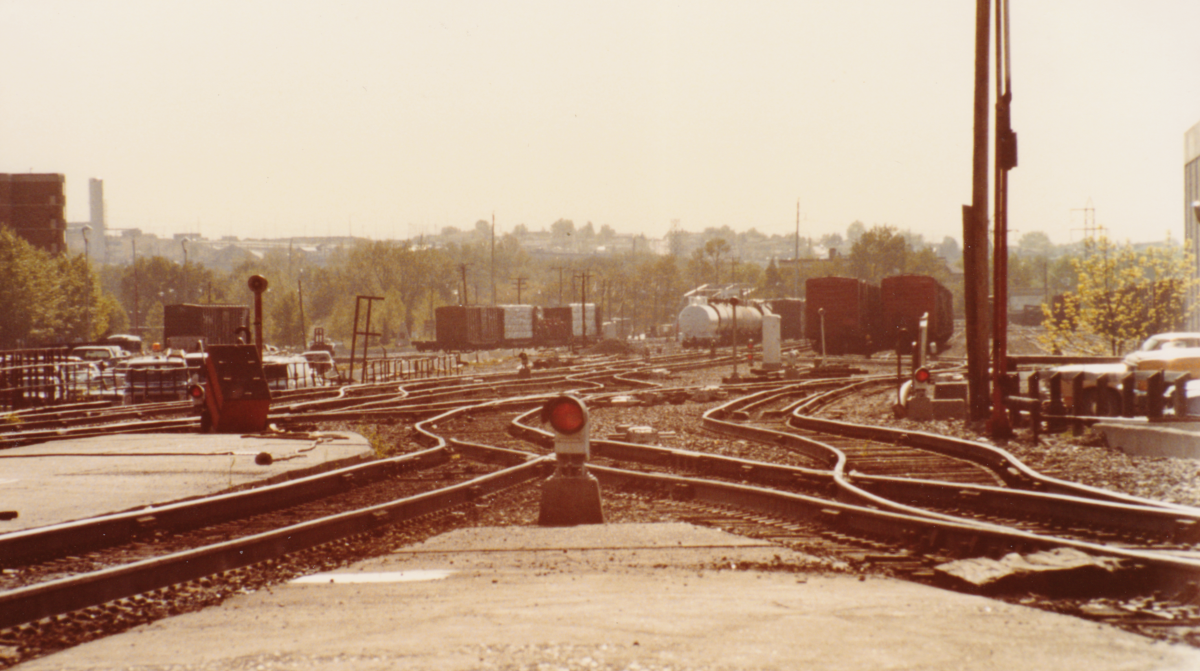 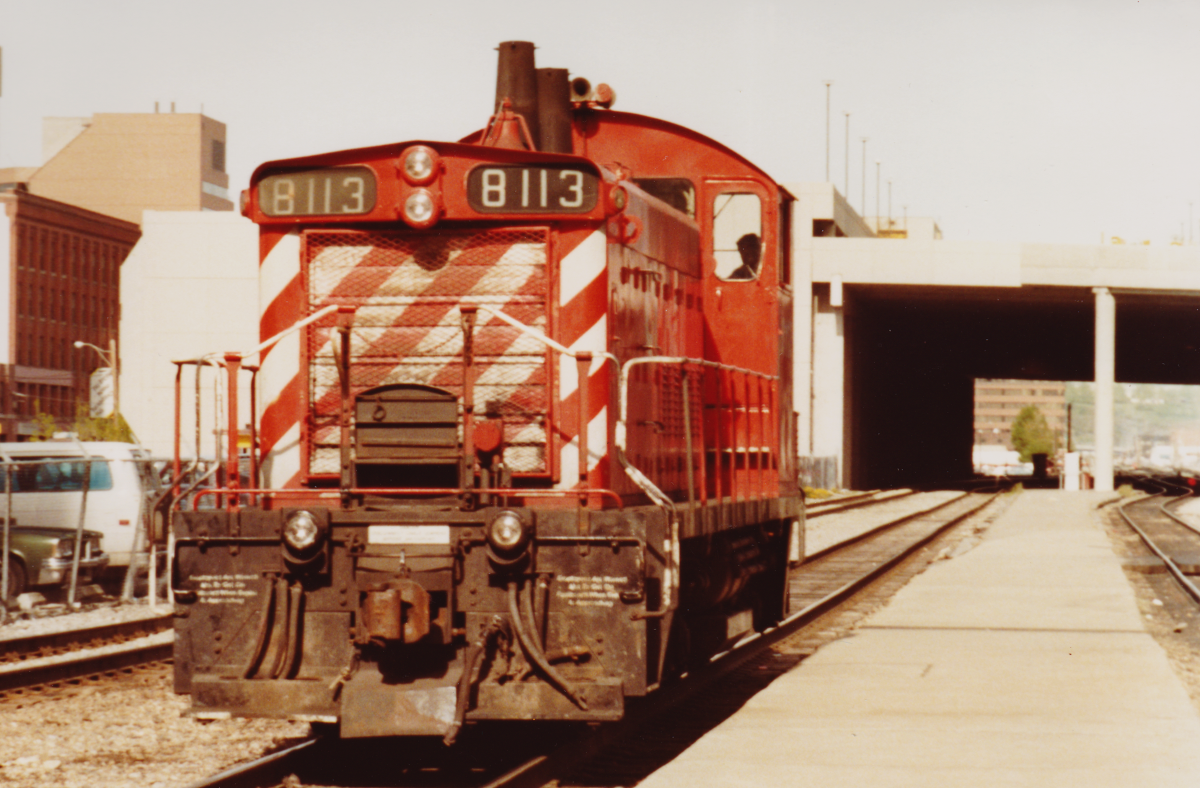 The rest of these photos were taken after we detrained for Chateau Lake Louise. 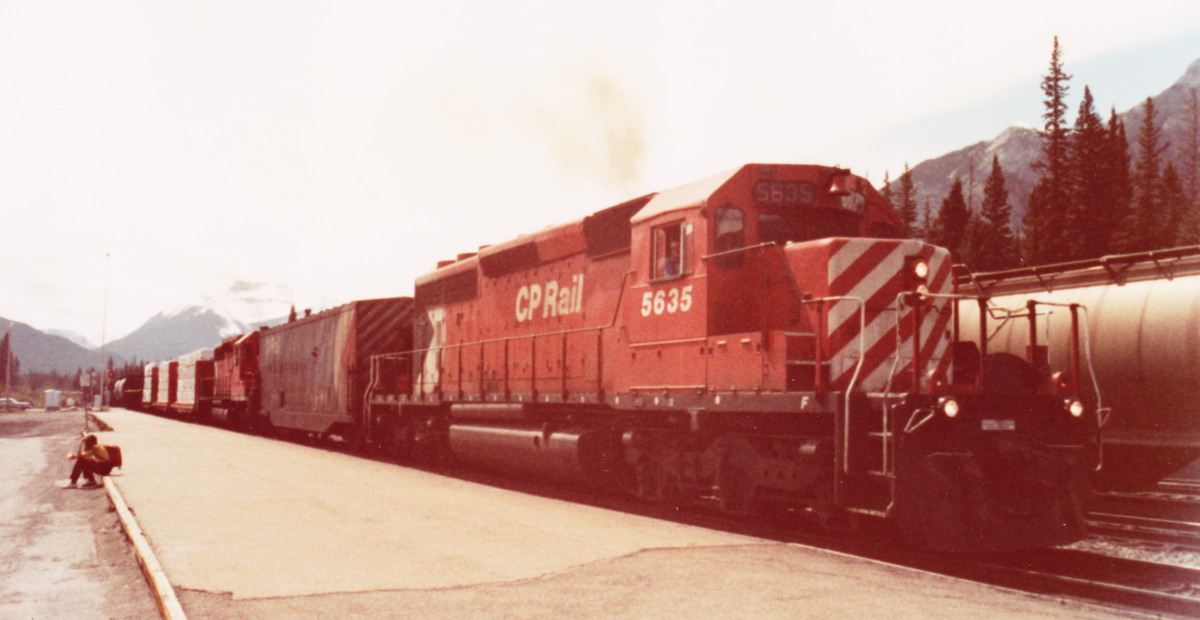 At Banff a headend locomotive consist includes a Robot car.
It turns out that photographing with the early afternoon sun behind the camera produces better results ... 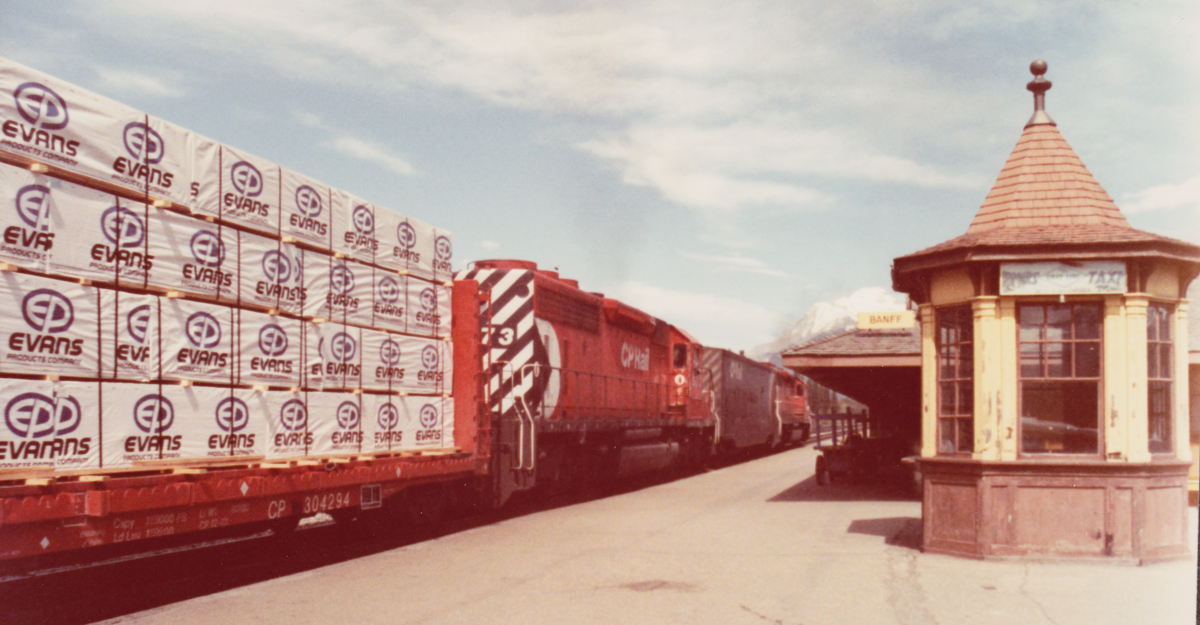 At Lake Louise in the Evening 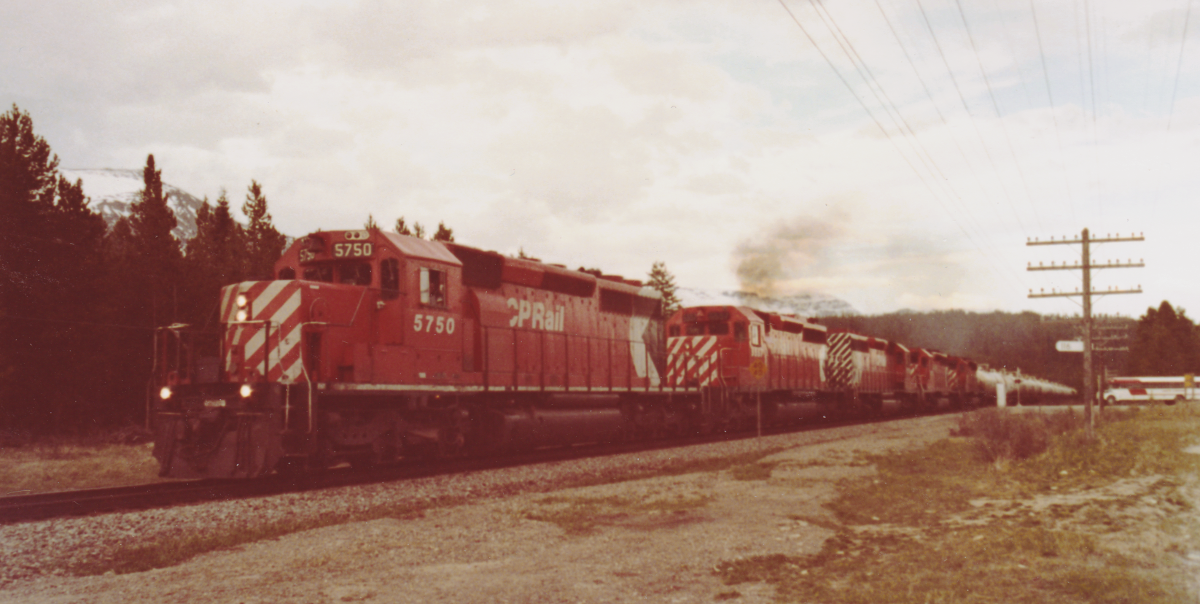 A westbound climbs the new line.
The latter features a carefully engineered grade up to Stephen. 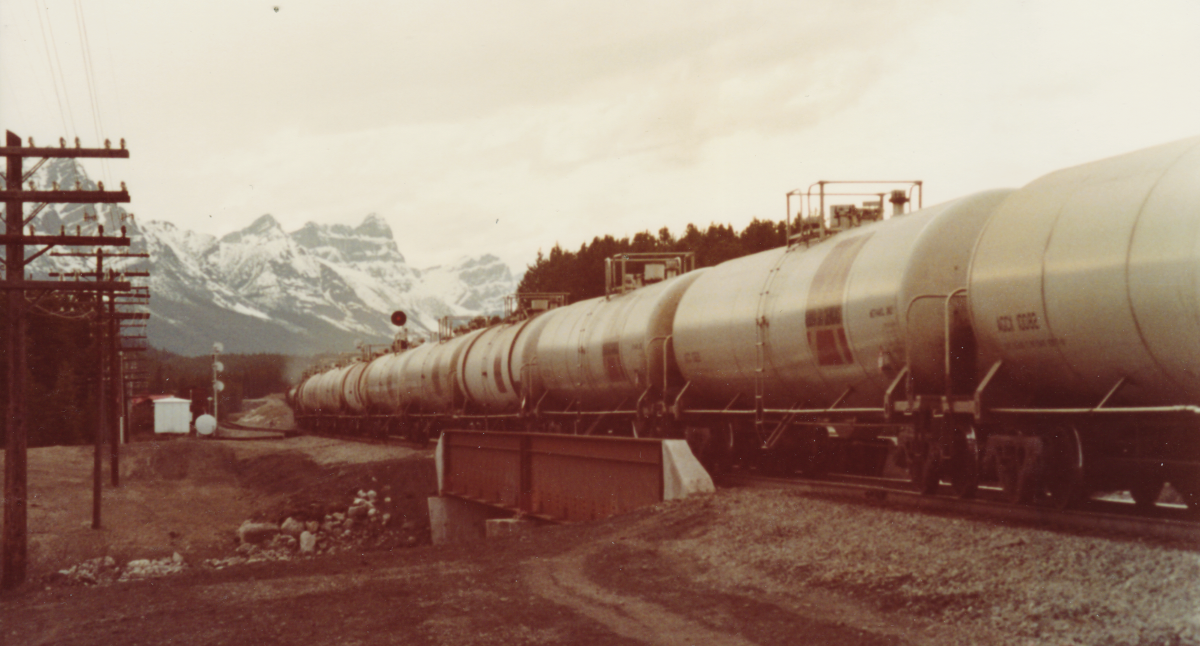 A little later, the early June sun squeaks between clouds and peaks at 2100hr.
The Lake Louise station can be seen in the distance with its red roof.
The original line curves around it - the new line runs behind the signal to the right. 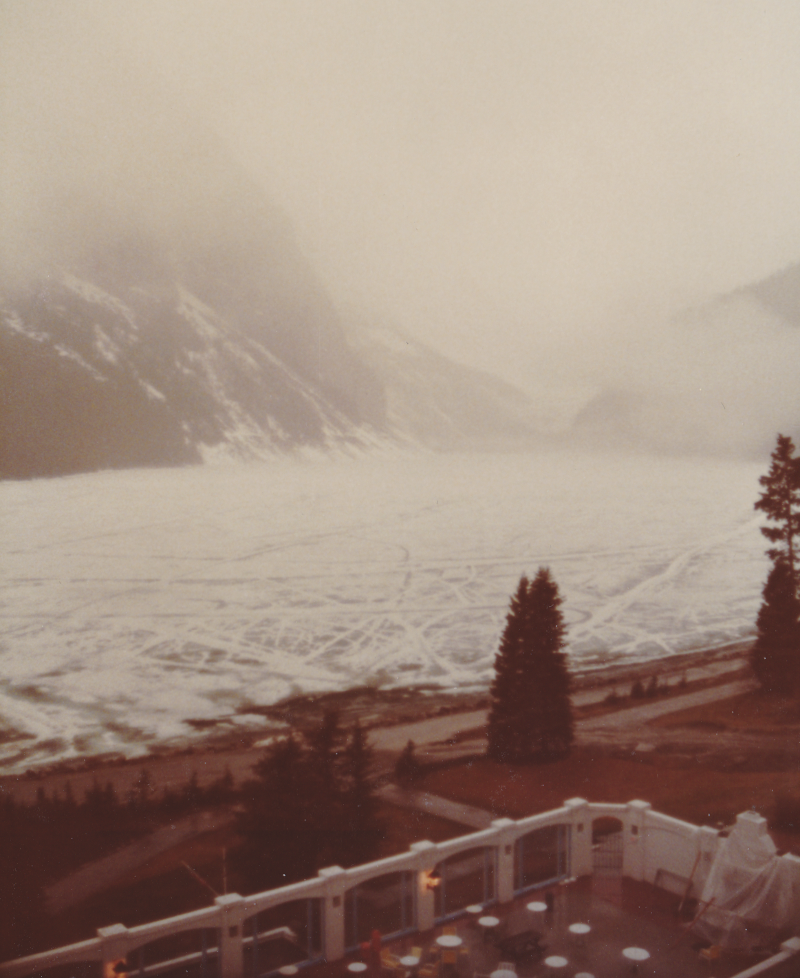 ... meanwhile, this is the view up the hill, back at 'home'.
The art deco pool has been paved over and there is no bar service there tonight.

These final photos were taken as we crossed the Alberta-BC border,
travelling back and forth between Lake Louise and Field. 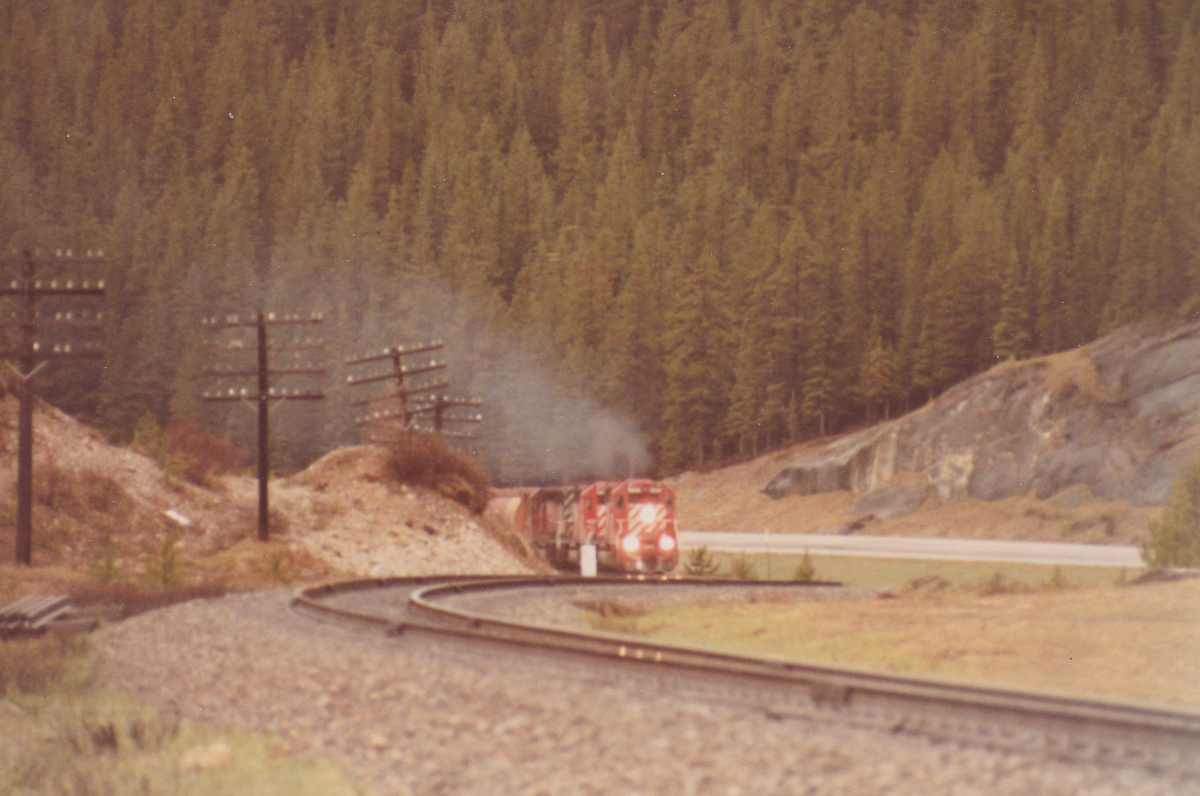 A train of grain empties climbs between the Spiral Tunnels and Stephen. 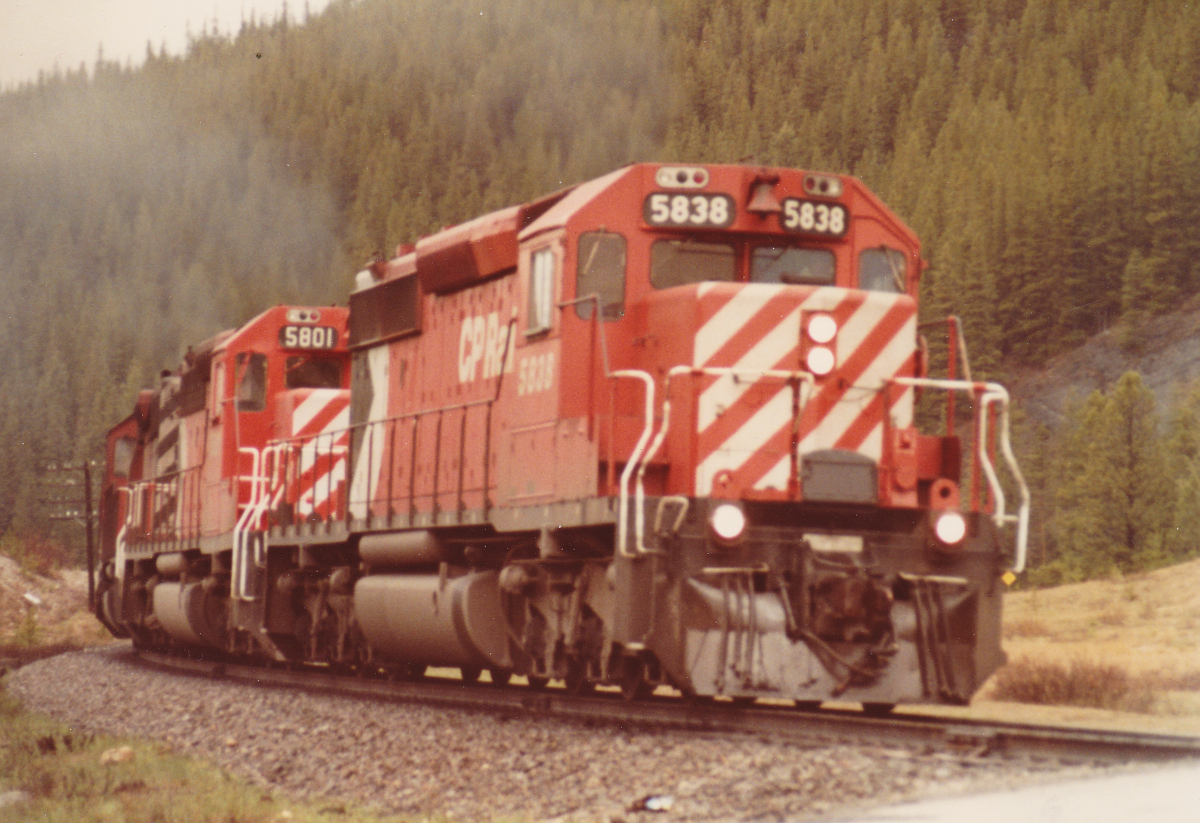 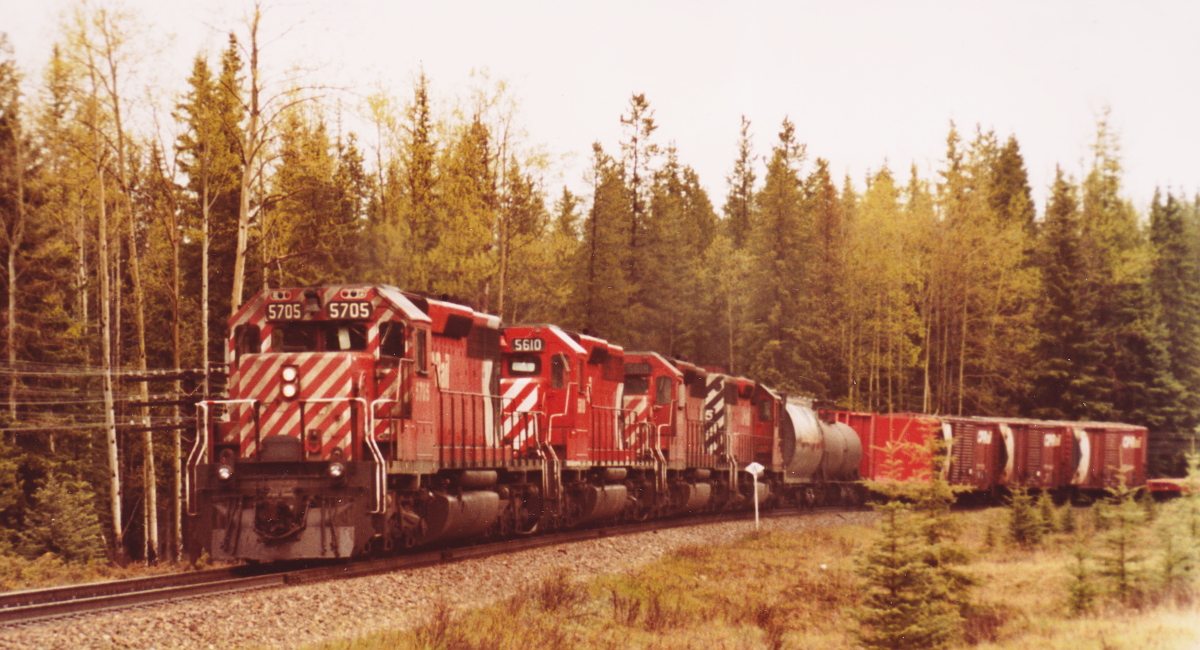 Another eastbound is seen at a nearby level crossing. At the division point at Field 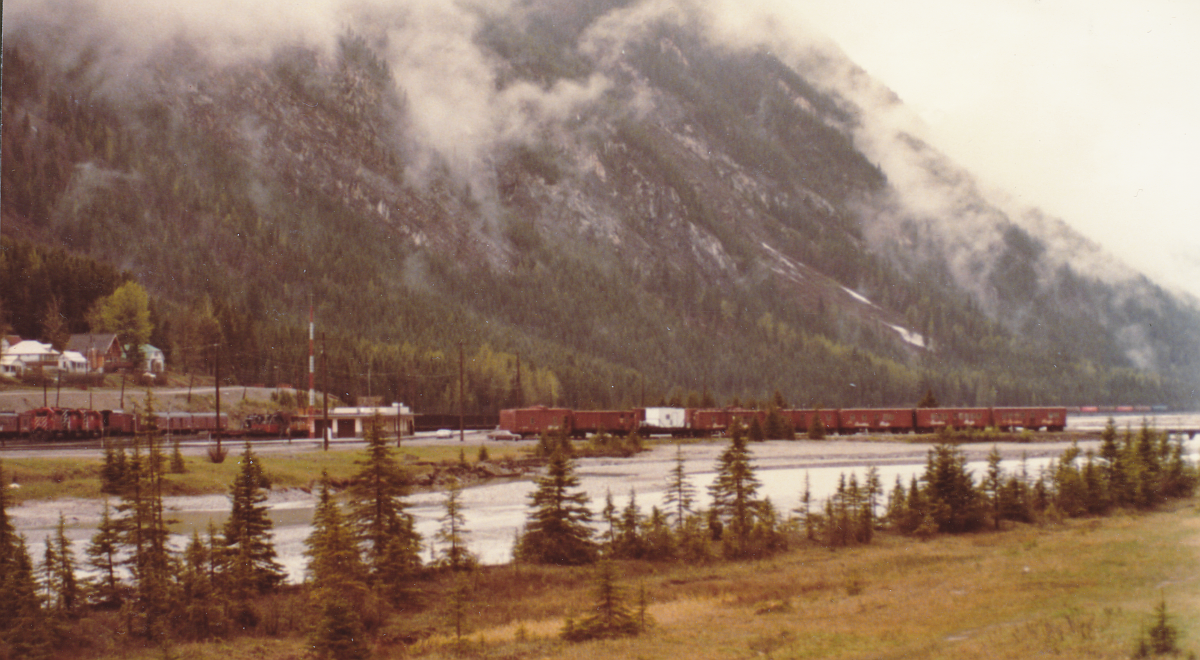 Looking timetable west, you can see power near the station.
Maintenance of way equipment occupies the wye ...
the latter was formerly used to turn steam locomotives between runs on the Hill. 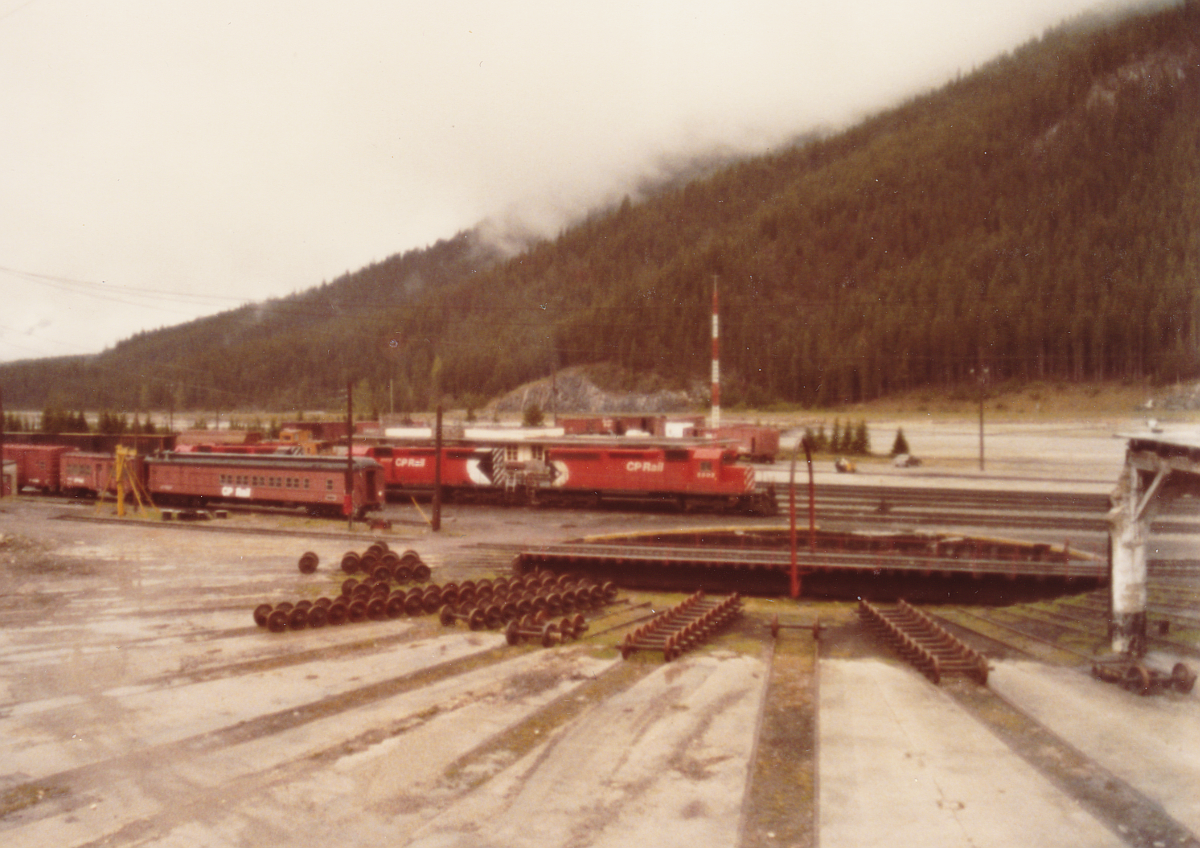 The radio mast marks the location of the station.
Some artifacts of the roundhouse can be seen.
'East up the Hill' is now to the right of the camera. 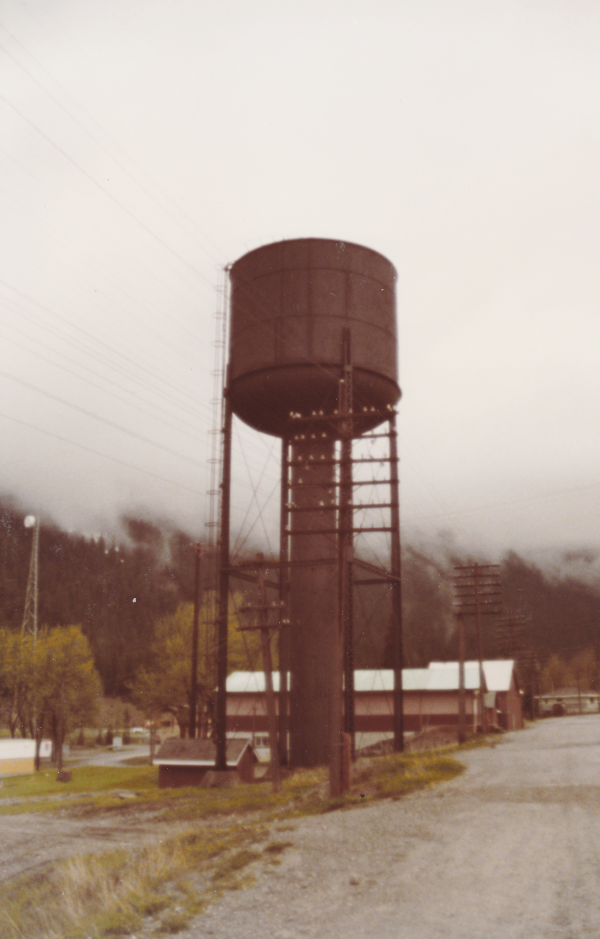 The water tank represents another era, but it is still there in 2017.
Often the infrastructure used for steam locomotives also provided
fire protection and potable water for the railway community.

The numerous 'telegraph' arms represent an era before microwave towers -
one of the latter can be seen at the left photo edge.

Another day, another arrangement of equipment in Field yard.

The Trans-Canada highway is to the left, the line up the Big Hill is to the right.

Speaking of 'telegraph wires' and old technology ...
before 'software' ... paper or plastic tape could be used to 'stitch' together images.
Here is No 1's train between Stephen and the Spiral Tunnels. ... under the Trans-Canada and between the Spiral Tunnels. 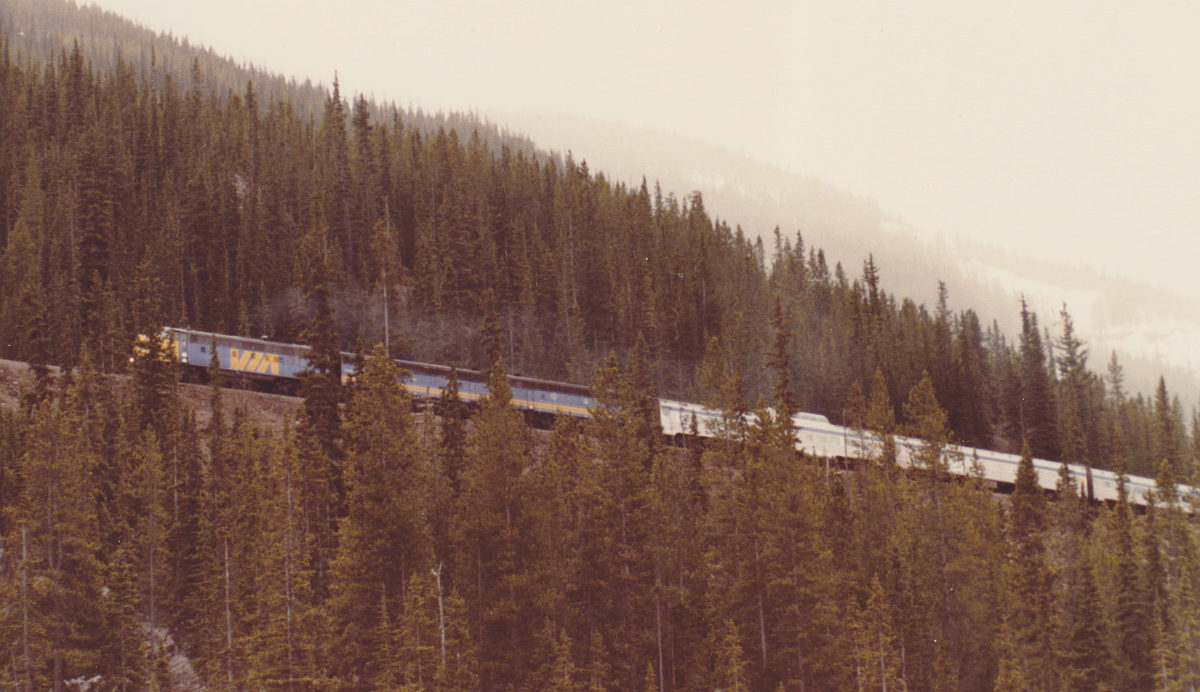 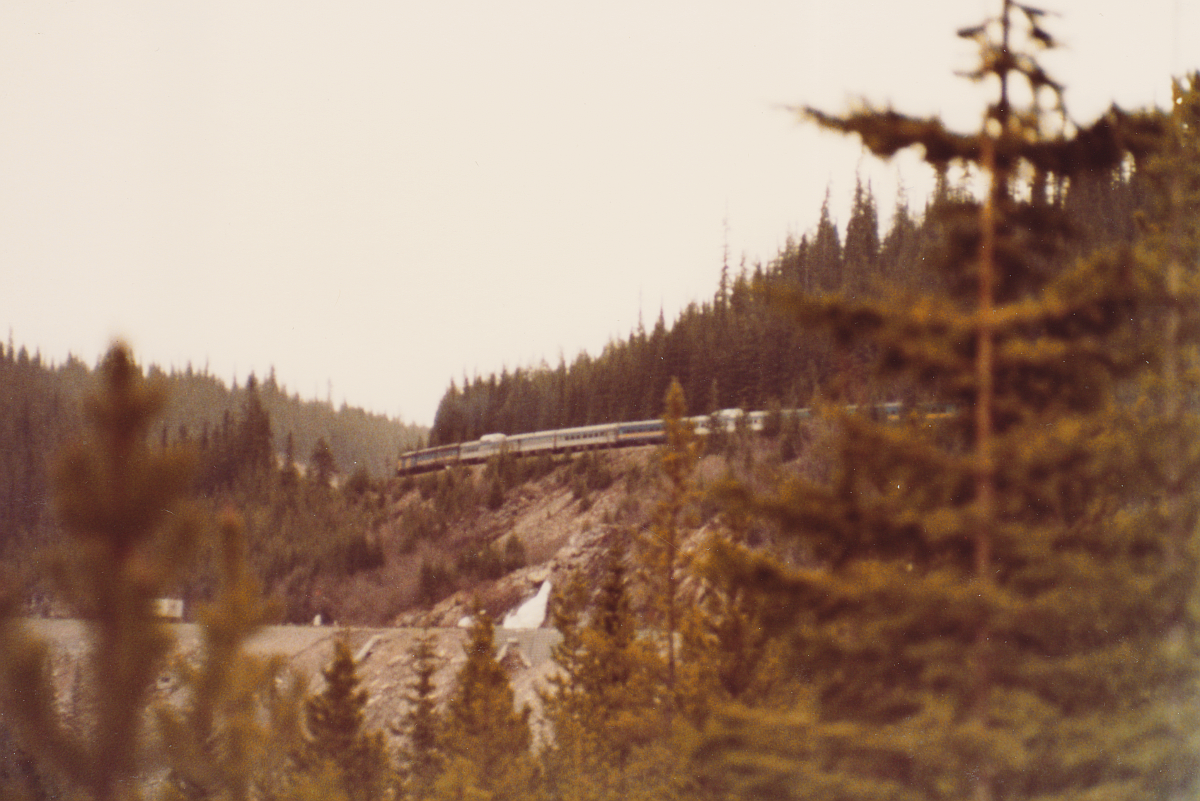