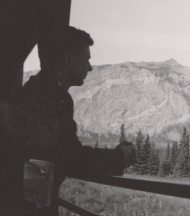 My father's September 1950 'Third Vacation' while working for the CPR (at this point in the office of the Auditor of Passenger Receipts) took him across Canada via the CPR, and down the west coast to Portland, Oregon via the Great Northern.

A previous post looked at his daytime photos on No 7, Kenora to Broadview .

This post covers part of the next day of his trip - from somewhere near Gleichan (GLEE shan) to Banff (Ban-F-F sorry). The improvement in weather, the distinctive prairie landscape, and his first contact with the Cordillerans resulted in his taking a great number of photos.

I have chosen to exclude many photos which show only individual mountains. Today's trackside mountain views are virtually unchanged from what we photographed in the 1980s ...

In the old days, things were always better. As an example I know, west of Banff, Castle Mountain was started in 1858. It was replaced by Mount Eisenhauer in 1946. But, in 1979, they moved the Castle Mountain back. Maybe this was done because Mount Eisenhauer wasn't getting 'likes'. History Reasons: I think he worked as a general in The War and The Hippies didn't like it. It is unclear whether the two photos above are before sunset after Broadview
or
between sunrise and Calgary.

The establishment above is particularly picturesque, with its two wind-driven well pumps.
They could also watch steam-powered trains passing all day.

There is a photo defect to the right near the horizon.
However, the trailing clouds of smoke are from the locomotive. 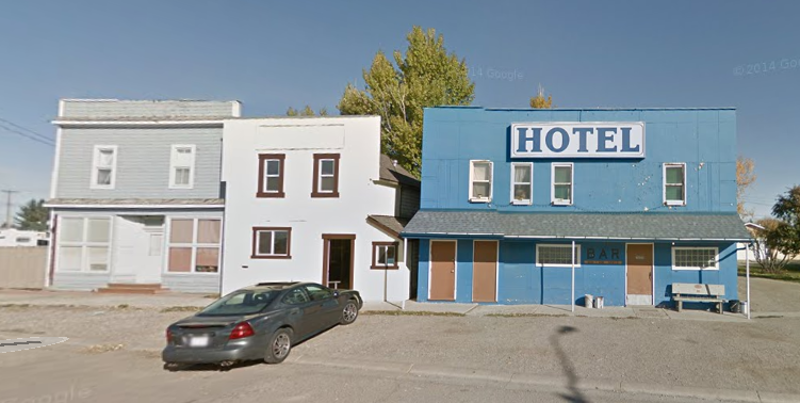 On Tuesday, September 12, 1950 the grain stooks await the threshing machine.

Just east of Calgary, these storage tanks and refinery towers seem to be on the north side of the tracks. The Calgary Terminals employee timetable is from the same 'time change' period as my father's trip and passenger timetable. 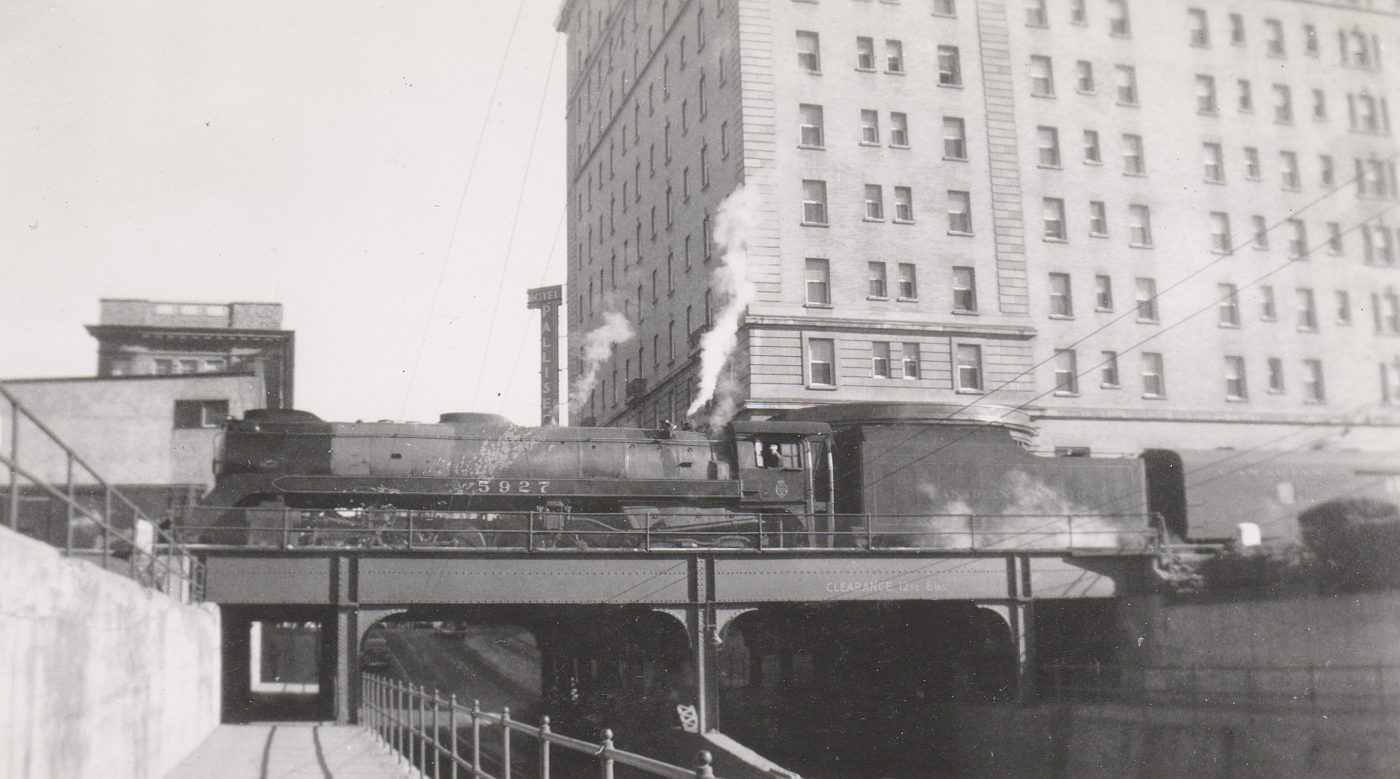 " Train 3 from Toronto (ahead of Train 7) was about to leave.
Stopover included replacement of a Hudson by a Selkirk "

As you can see above, the timetable allotted 30 minutes for the Calgary stop. The front of  CPR's Calgary station.
My father's Train 7 may be at the left. 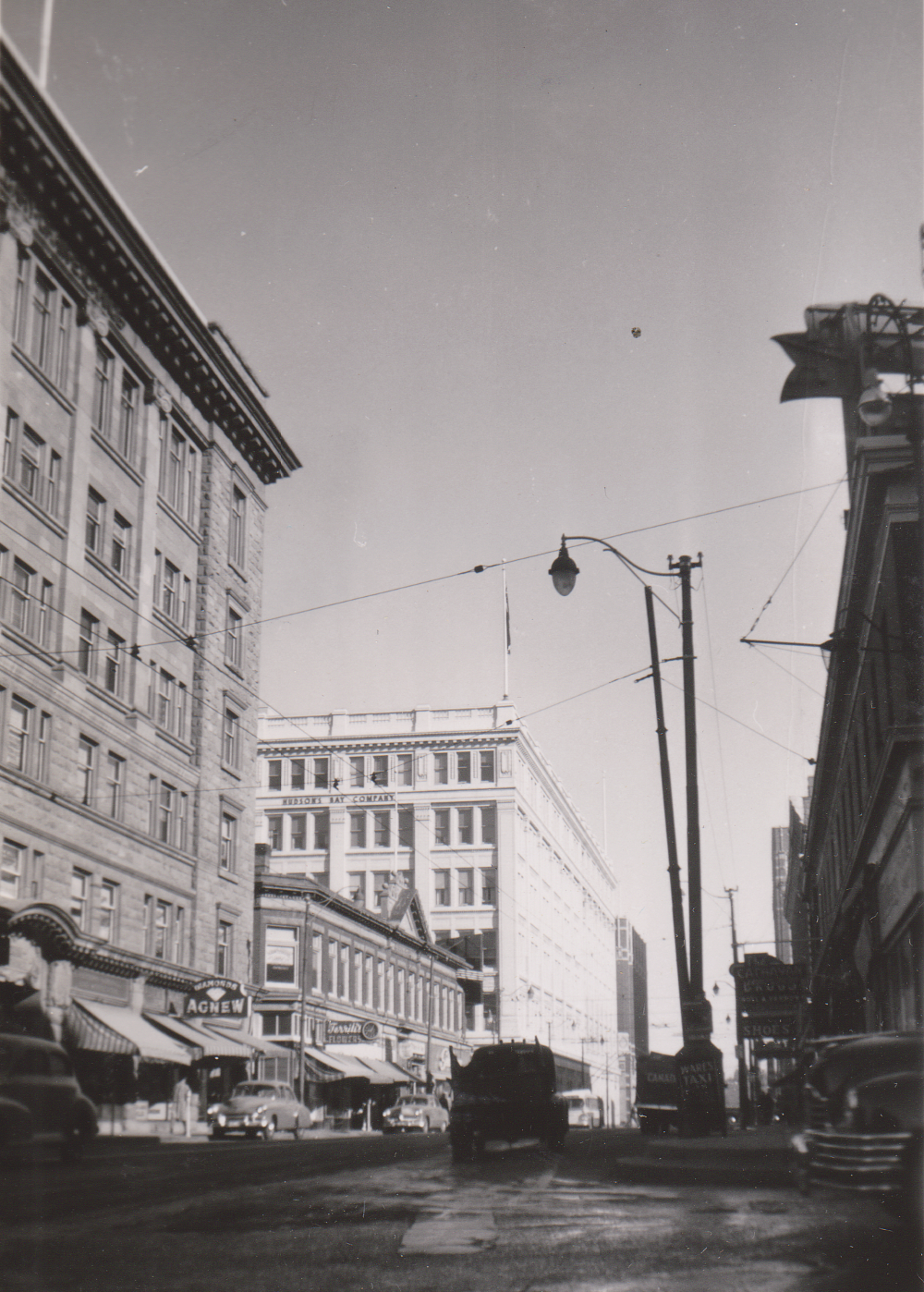 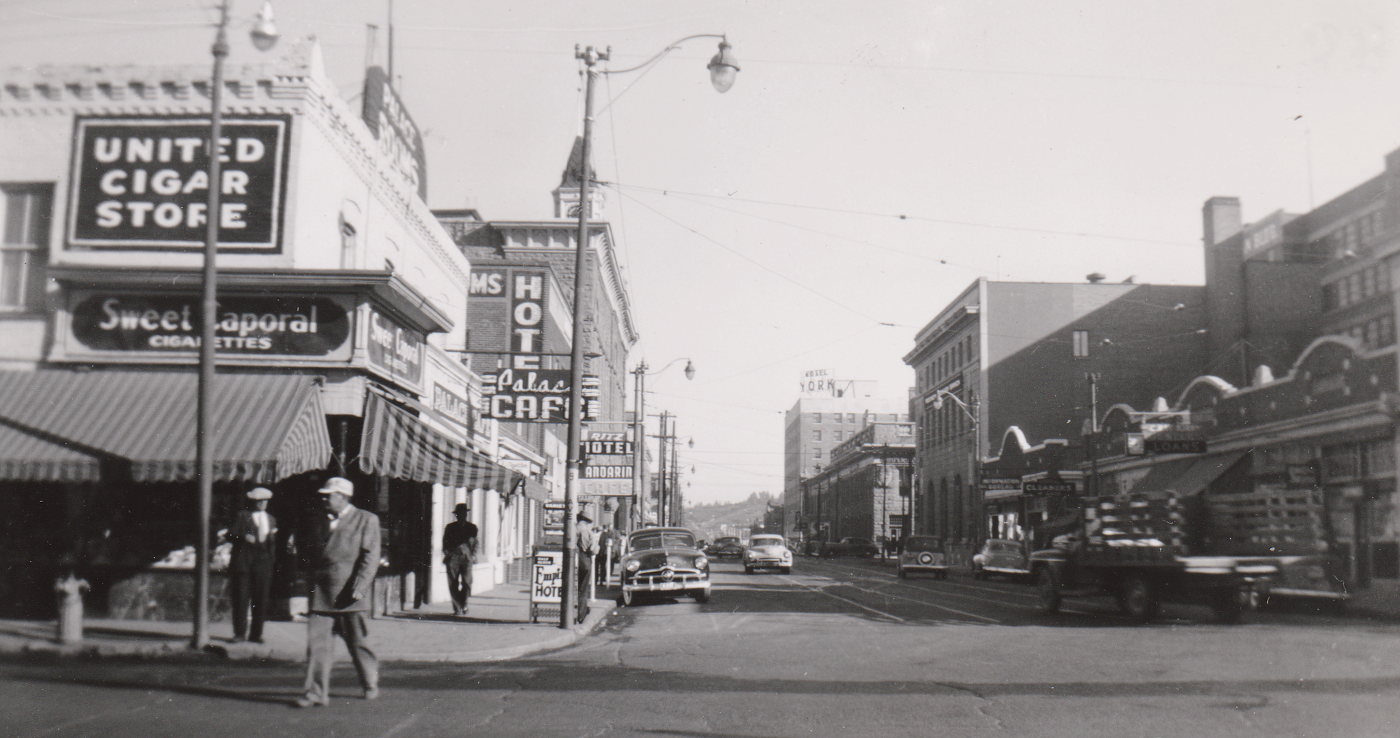 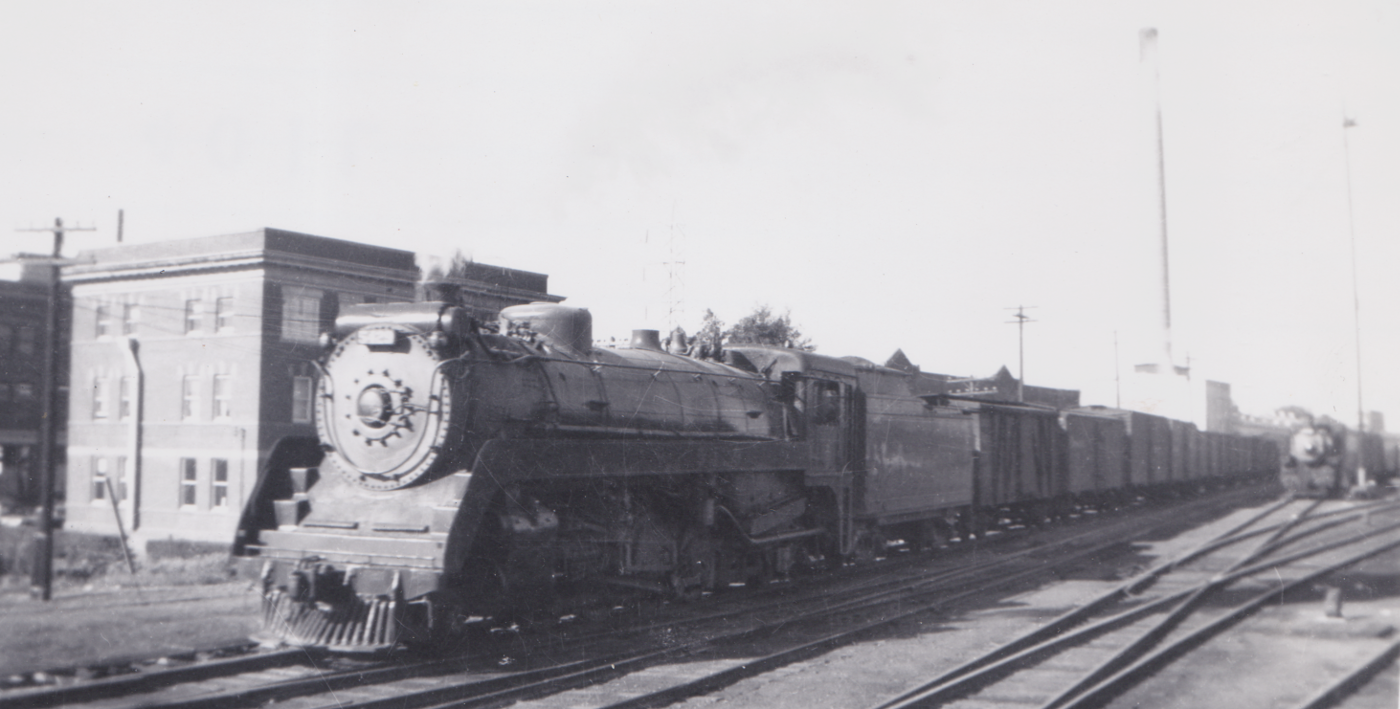 CPR 5429 pulls an eastbound past my father's just-added open observation car with a nice, clean stack.

The CPR had 16 open observation cars in this class and they could not be interchanged with US railroads.
Most of the trains listed below had them regularly in their consists. 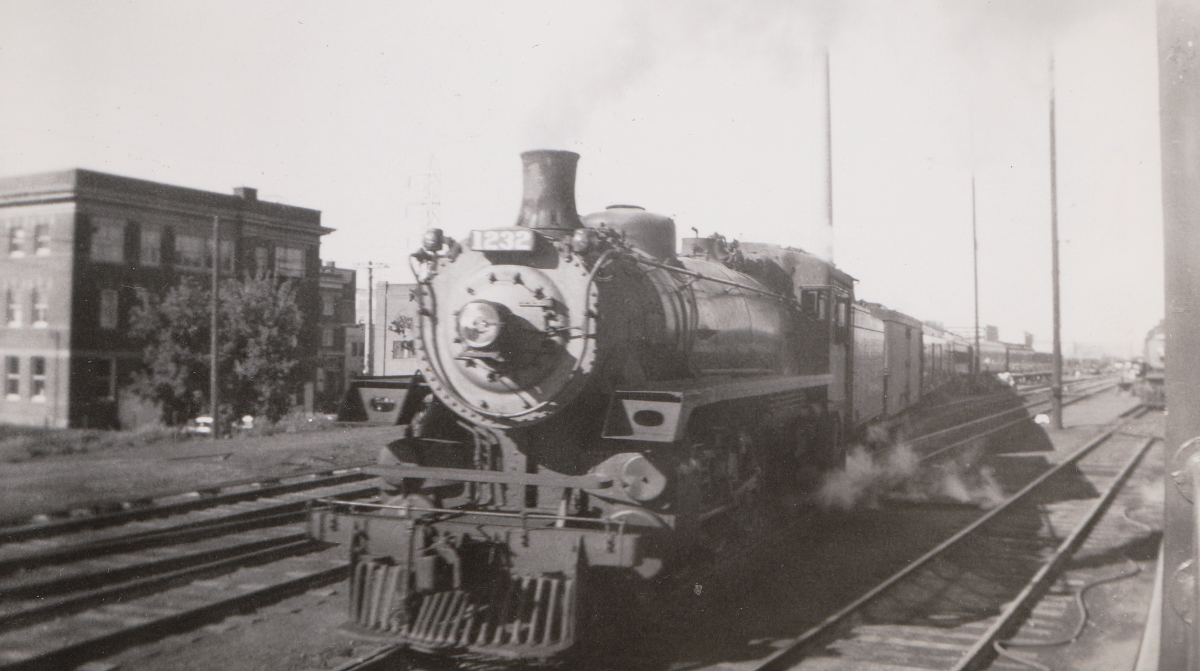 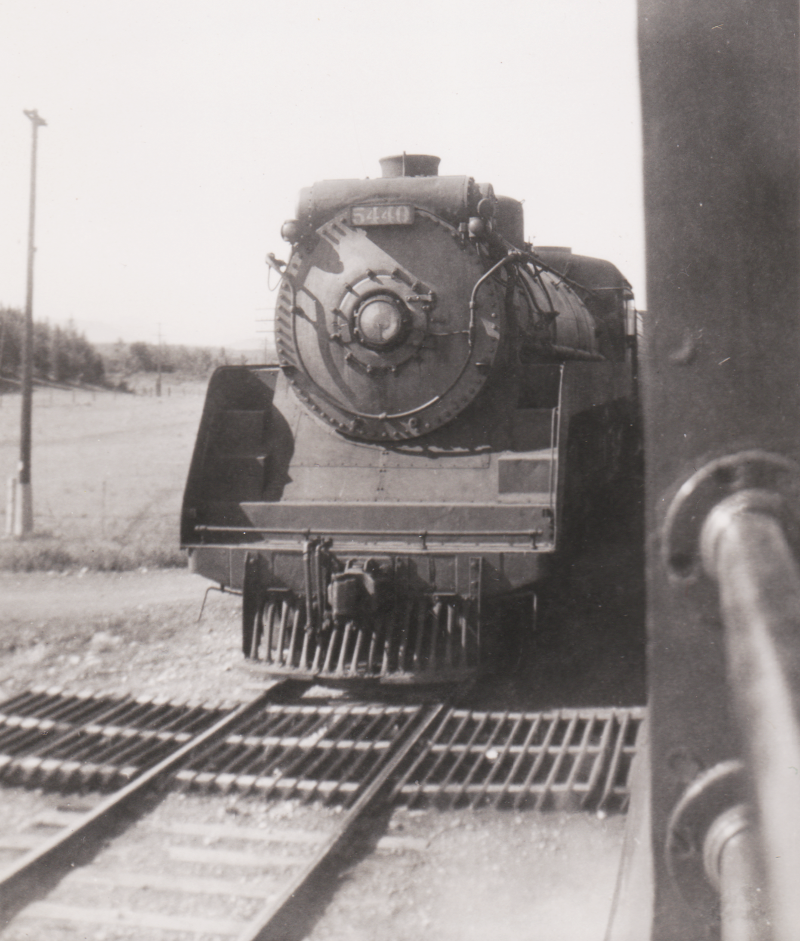 The grill is a cattleguard. In old photos from eastern Canada, you'll notice that railway-built wooden cattleguards and fences were present across the sides of many rural crossings to block off the right-of-way to crossing cattle.

Cattle would have a natural aversion to stepping on an unnatural, difficult, potentially painful footing.

Before internal combustion vehicles were commonly available to transport large livestock ... driving herds along a road would be the most common method of getting them from point A to point B.

In the early 1960s (from personal knowledge), some dairy cattle in Quebec were still driven to barn from pastures for twice-daily milkings via a public road.

Today cattleguards are no longer necessary at rail crossings. The cattle find it more convenient to work their way through the railway right-of-way fencing. 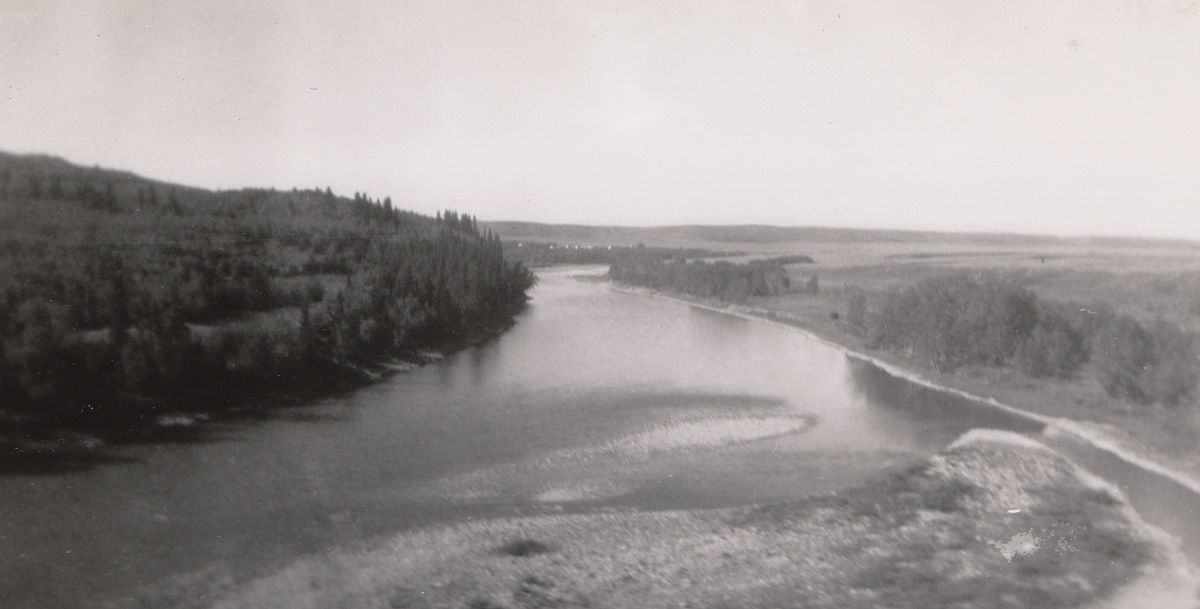 The field in the foreground may be in summer fallow. 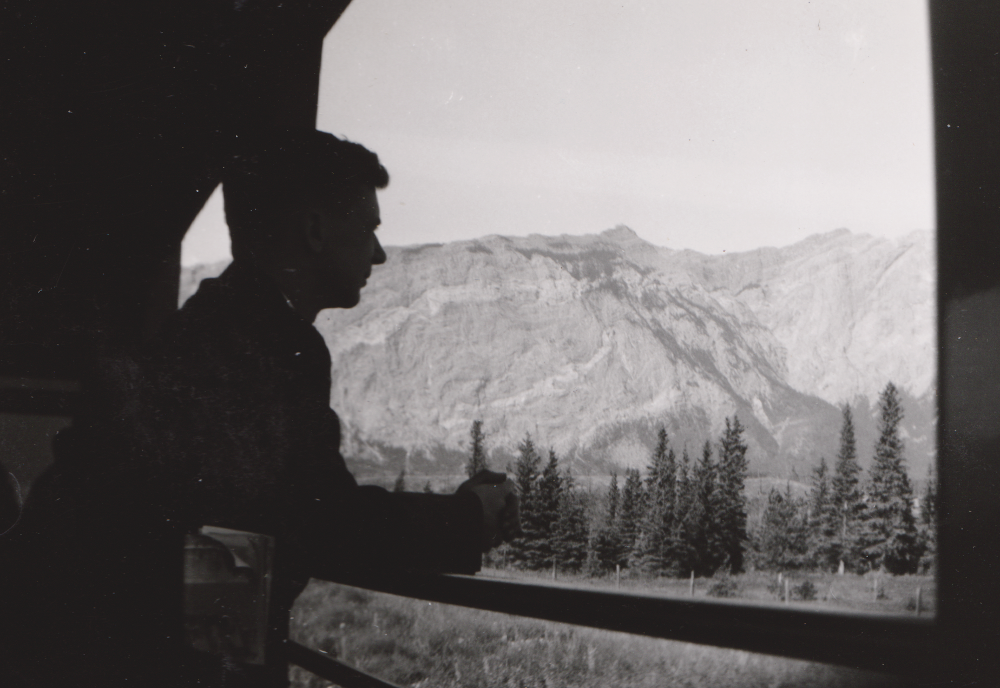 My father in silhouette. 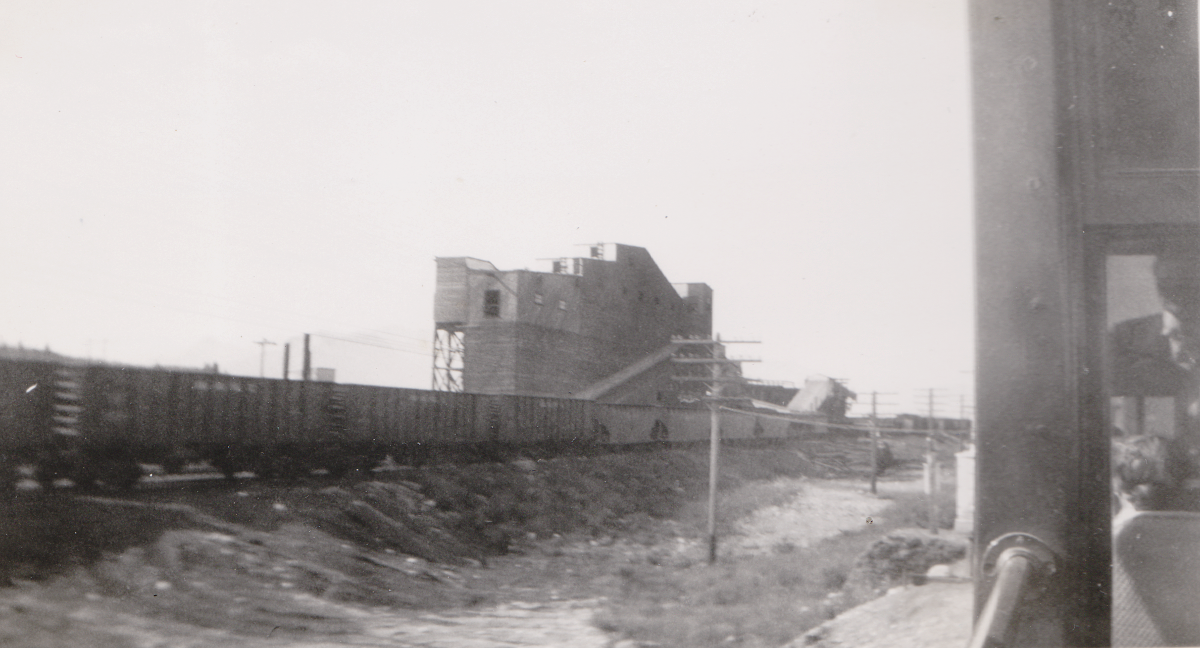 The photo above is not labelled. Here is the Laggan Sub so you can check the meets as they occur. 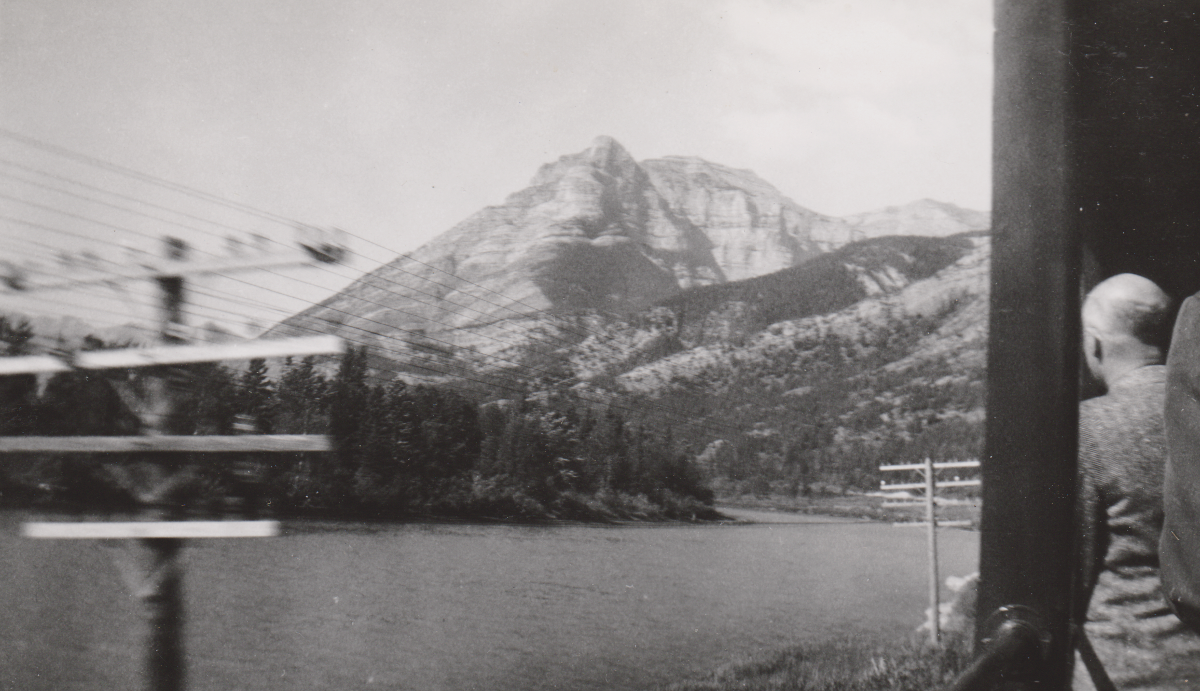 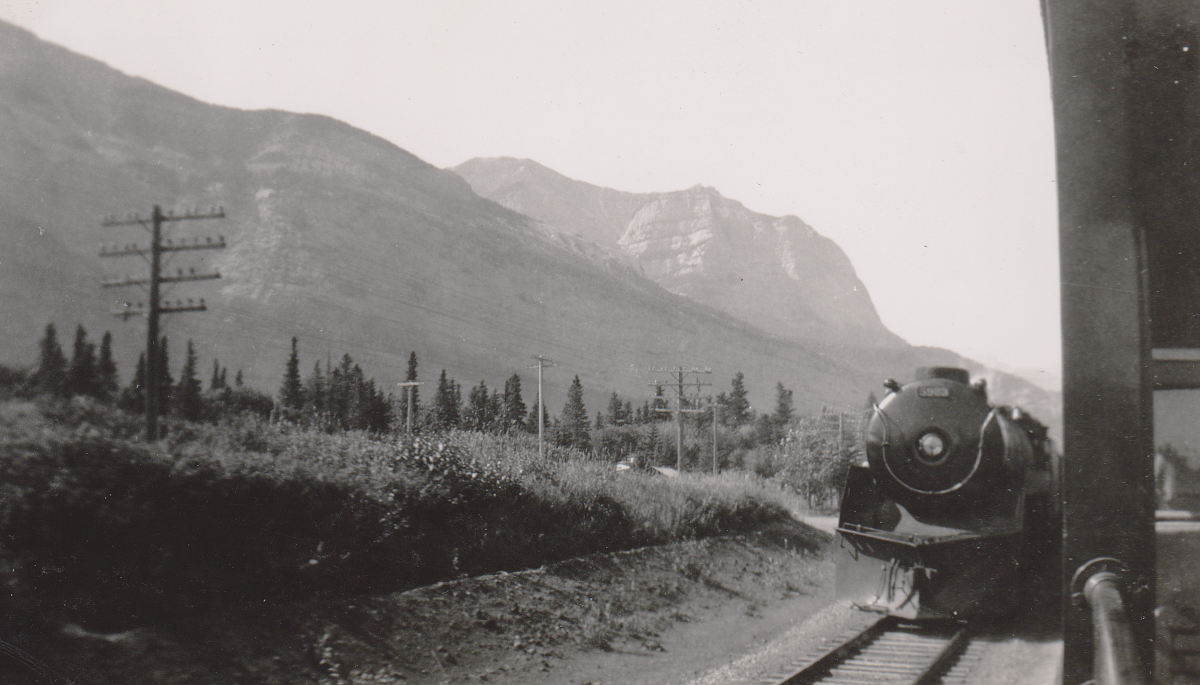 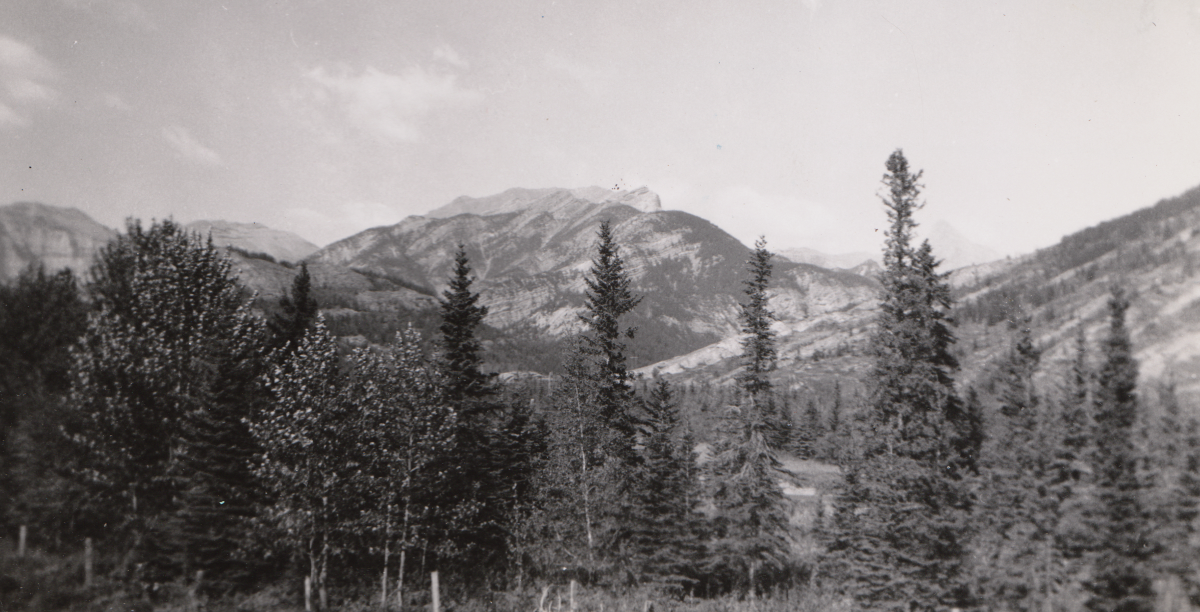 Still on the Bow River. 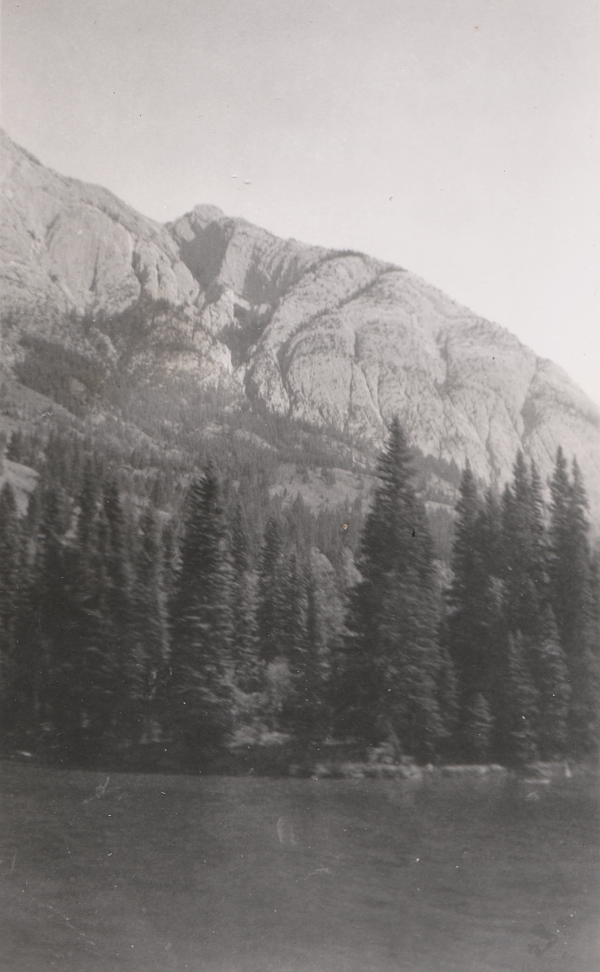 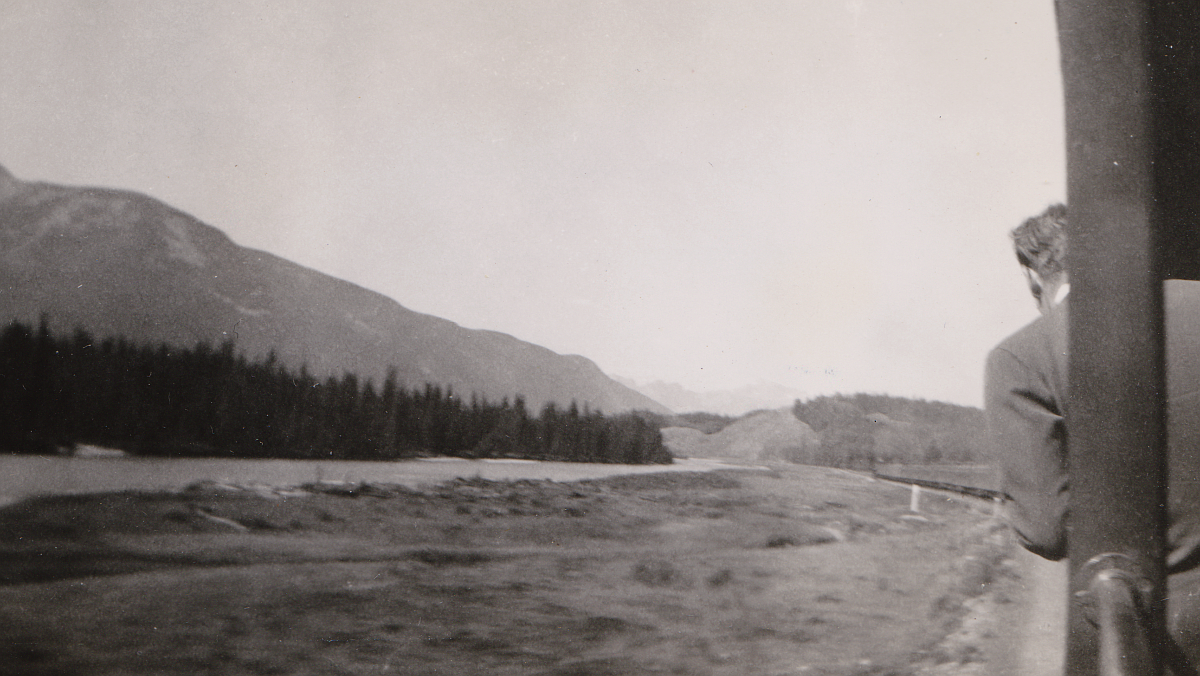 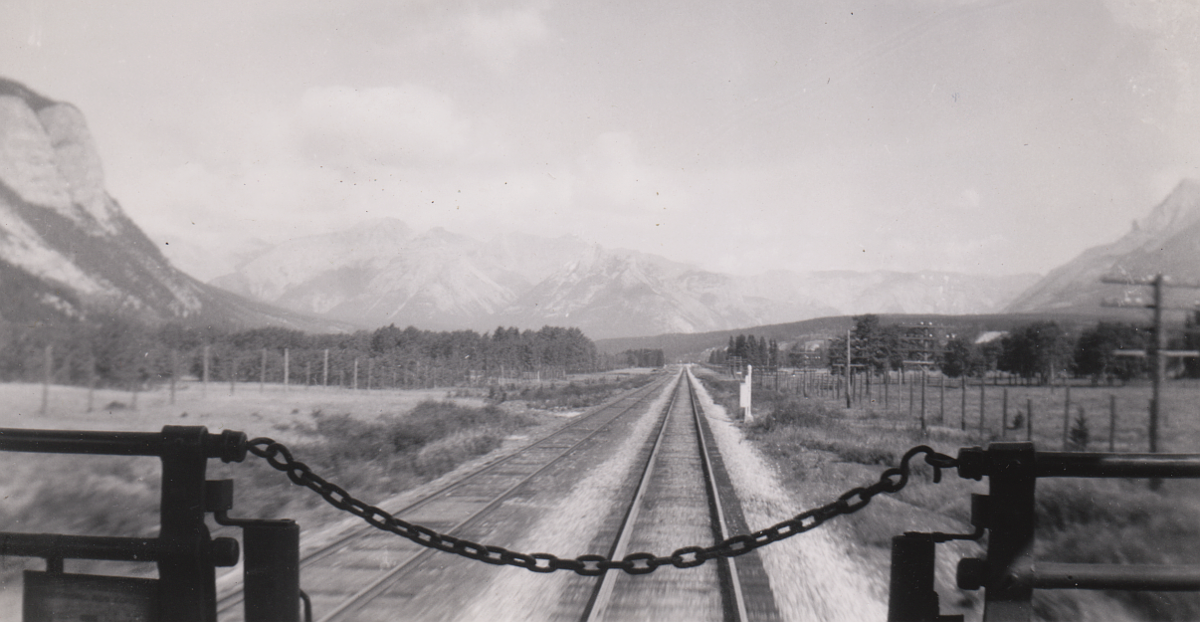 The fence at the left seems to be designed to discourage deer and other Cervidae.

You'll notice significant interest by both engine and train crew members in the front left running gear here and farther below. 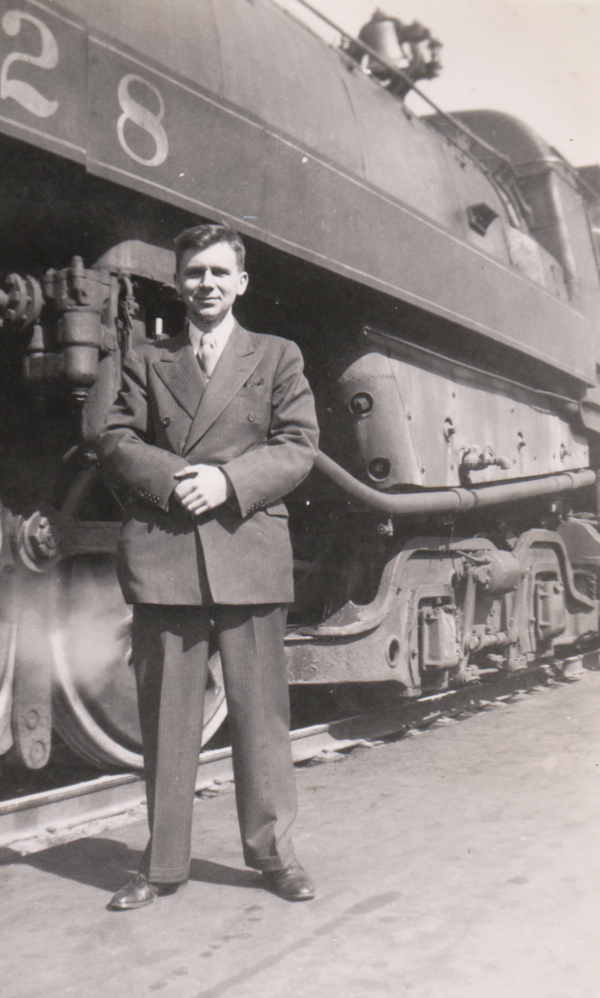 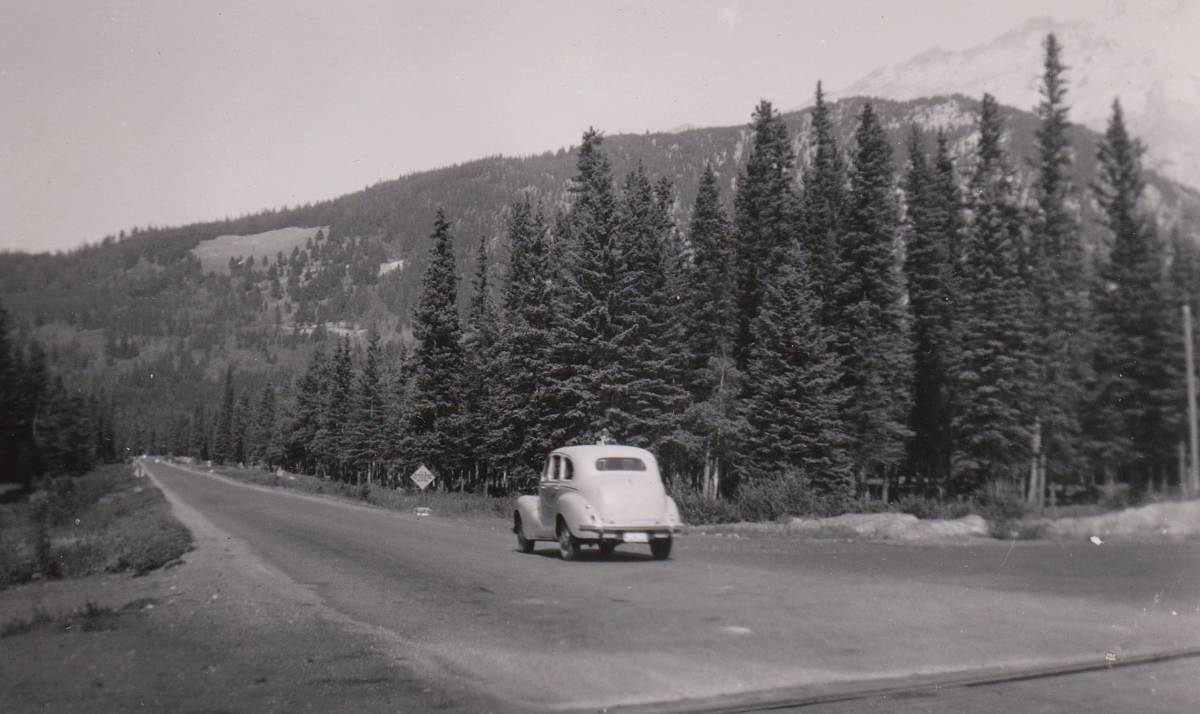 The 'aerial' on the cab is part of the water spout equipment.
A similar man with a light suit was present the last time my father had his picture taken, above. 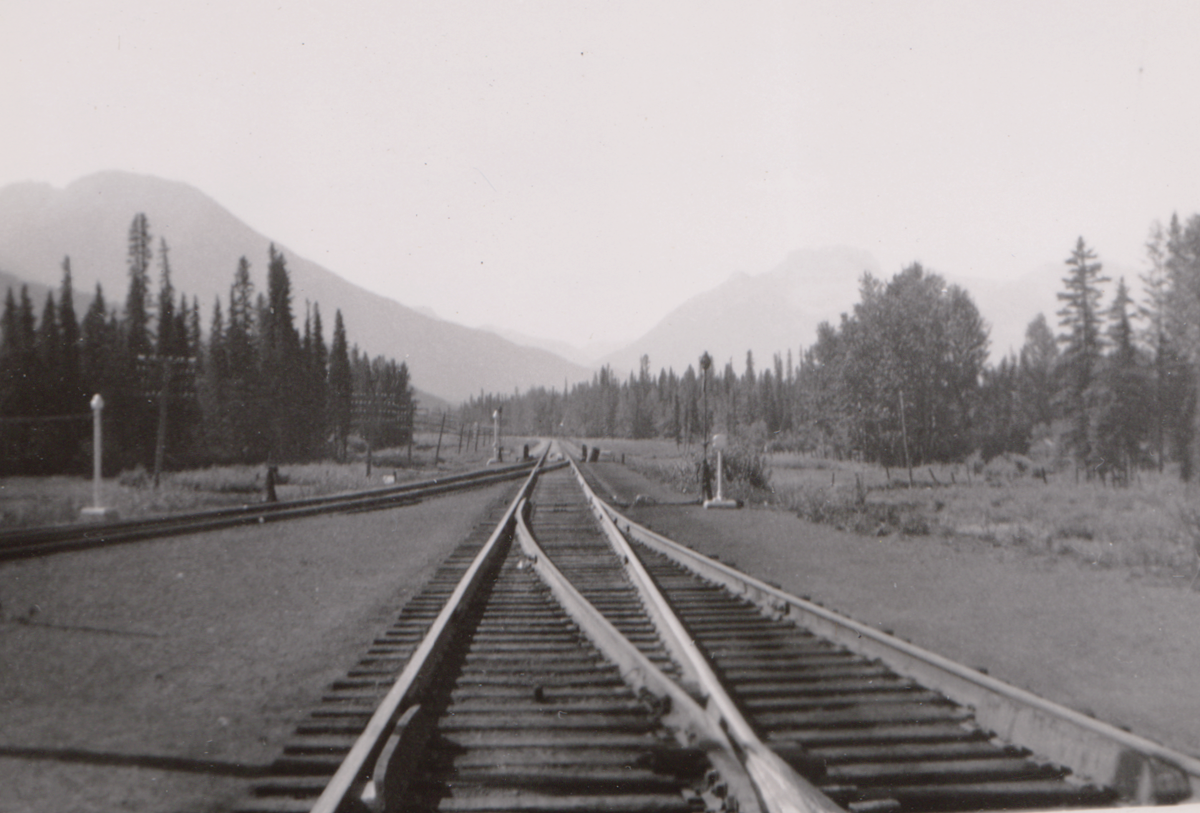 
Neither in the old UCOR nor in the subdivision footnotes could I find an explanation for the silver poles with 'signal style' finials. They may mark the fouling points for track circuits.