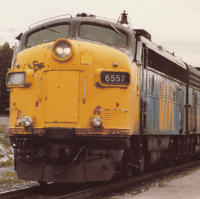 On Friday, June 1 1984 we boarded VIA Train Number 1 - after a stay at Chateau Lake Louise - and continued on a trip west to Vancouver.

Using a car we rented at Lake Louise, we had spent a day or so travelling between there and Field - following trains as we could. During the few days we had at Lake Louise, we also enjoyed some of the many other attractions of the area. But this post is centred on a few photos I took on the way to Field.

While I have Canadian government topographic maps of the area and various other CPR tourist maps ... this rough effort on cheap paper from over 110 years ago does the nicest job of showing the details.

You can see the Great Divide marked - from that point the water flows either to Hudson Bay or the Pacific. Lake Louise and the other 'lakes in the clouds' are shown nicely. This was before the highways arrived and the settlement patterns became more complex.

During the era of the Big Hill, specialized mountain crews operated between the two locomotive terminals at Laggan and Field. After the Spiral Tunnels were in service in 1909, Laggan was no longer required as a terminal and the location was renamed for the nearby lake.

Above, the old postcard provides a nice overview of the arrangement of the Spiral Tunnels.

Below, a circa 1960 CPR descriptive pamphlet provides detail and data on the twenty miles we will travel.

Looking back in history, one would be hard-pressed to think of another
similar short segment of Canadian track or roadway which has received so much attention. 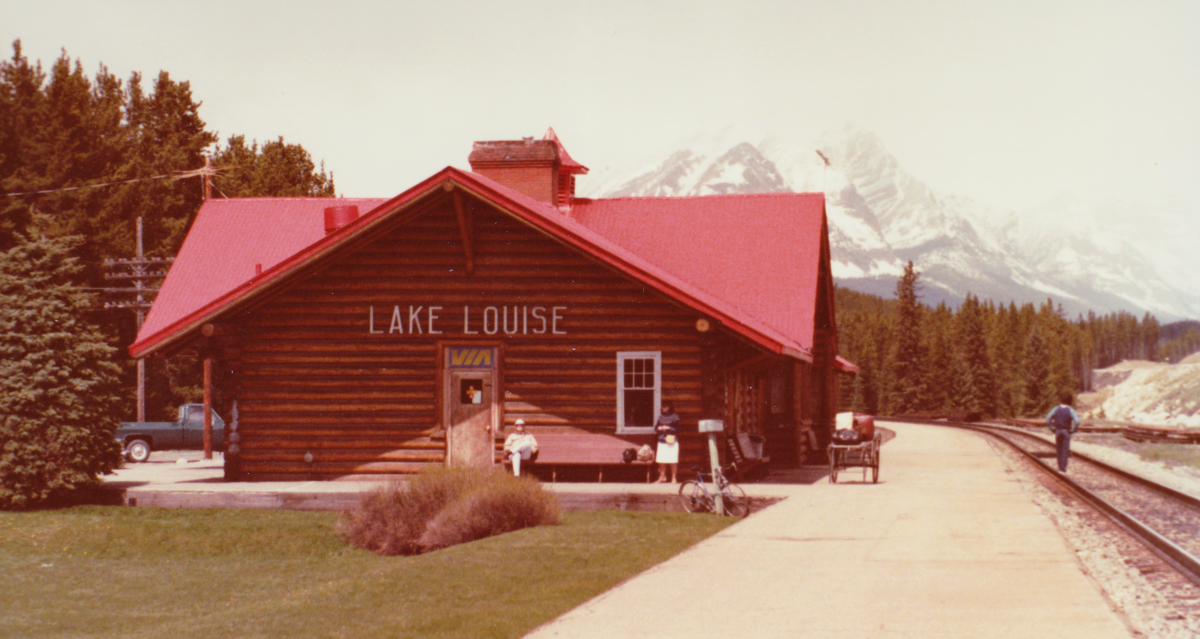 Lake Louise, looking timetable west.
Notice that that the original telegraph wires entered the rear of the station - as they generally did. 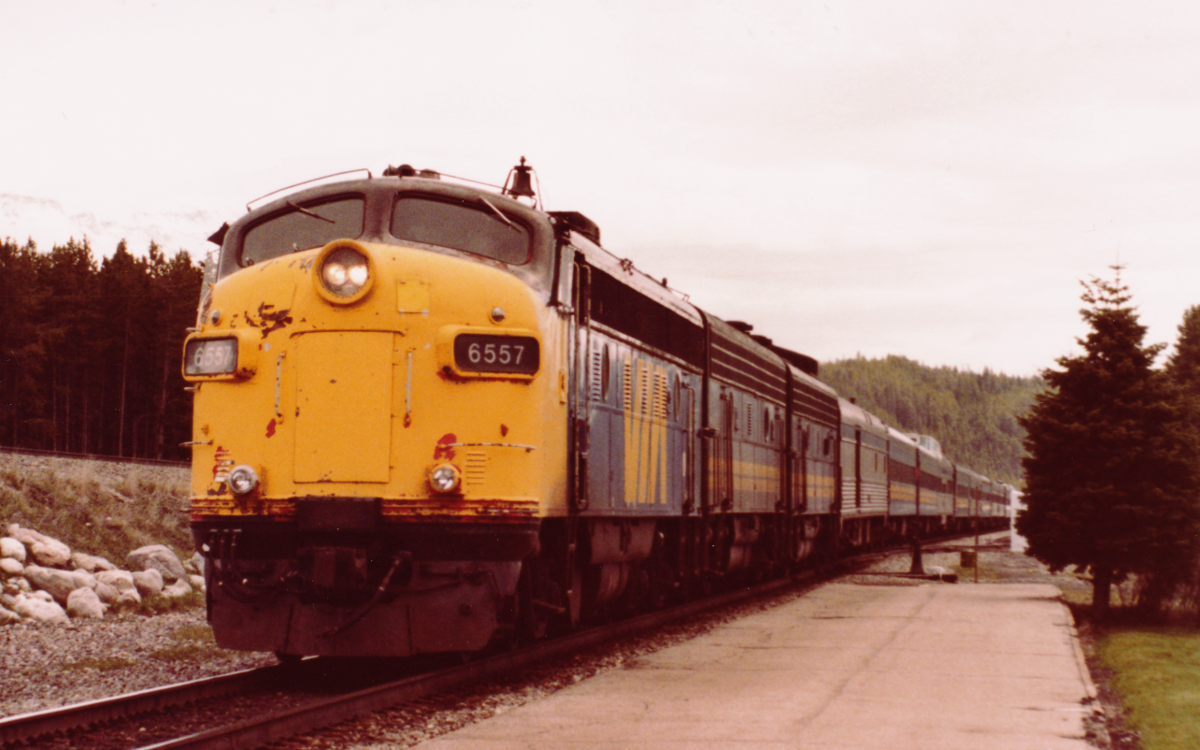 Our train will be following the original track alignment. Behind is a slightly longer, more 'gently' ascending track which will rejoin our route as we reach the summit at the Great Divide. While heavy freights hauling commodities to the Pacific benefit from the newer route, our train will have little trouble running up the steeper grade to the Divide. These photos are in chronological order - I checked the negatives. As soon as we could heave our bags into our opposite roomettes and slam the doors, we ran up to the 'cupola'. The dome was often staked out by people well in advance of the departure from Calgary. This dome community was generally thinned out by the time the train neared the Selkirks. 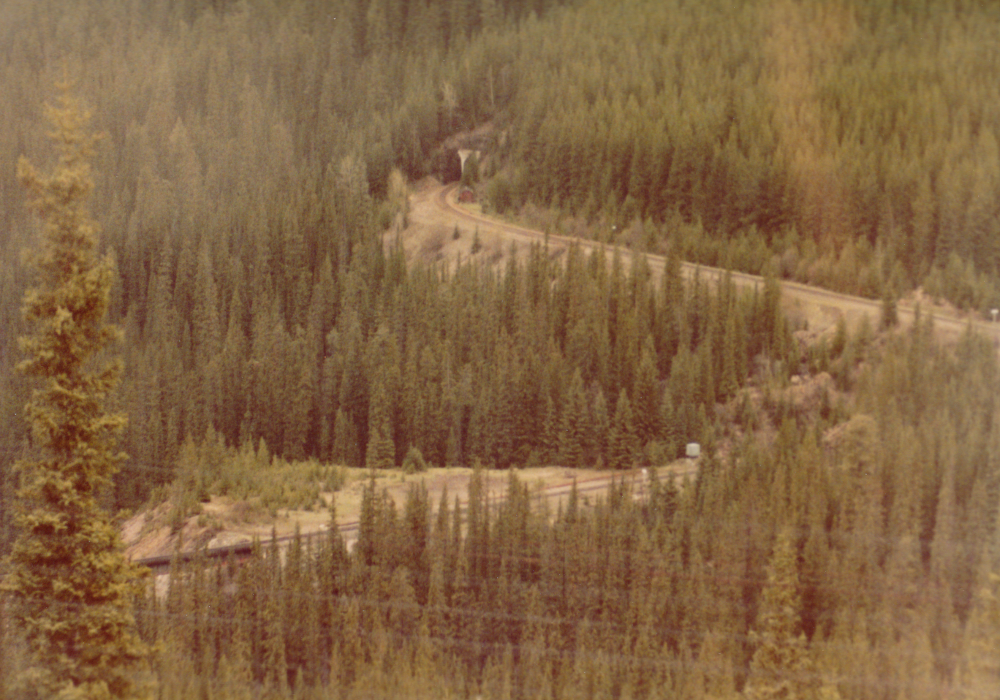 Here you can see the lower Spiral Tunnel.

After years of deferred maintenance on the rolling stock it took off CPR's and CNR's hands, VIA was only given 'life support' funding for its operations, and a lot of things were in poor repair. On one trip, our electrical system failed and our sleeping car was 'trainlined' with the adjacent car to the first point of repair at Winnipeg - we had minimal lighting. On another occasion, they had to shut our room's water off because we had a 'doomsday' toilet valve which would have quickly emptied the car's tank ... we were visited by carmen with plumbing skills in our own bedroom at Winnipeg.

On another trip, there was no steam heat through the night north of Superior. Clearly Rolly wasn't running that night. As a former steam fireman, firing up a steam generator probably enabled him to re-live the days of steam power. He took pride in his tale of the night that a VIA 'train rider steam technician' (yes, they had them - that's how bad things had become) couldn't satisfy the need for heat and Rolly went back and got the appliance generating to specifications.

... As bad-ordered VIA equipment relates to this trip: On the ex-CPR domes, the expensive custom Plexiglas front and rear corner dome windows had become very scratched - sometimes to the point of being opaque for photographs. The smaller front centre window (which carmen could open) had double panes of regular glass and you could get a reasonable shot through it. Westbound passenger trains were usually sent through a car washer, with a stop for manual brushing/scratching of dome windows, as Number 1 departed Calgary.

I have tuned these photos up as much as possible. Having photographed in the domes before, I was using an 80-200 mm zoom and fast film. You can often see light-coloured reflections in the glass in these shots.

Here is an eastbound freight on an undated postcard.
Notice the fire damage. Back then, fires were often started by the sparks from steel brake shoes.

I was curious about the consist. 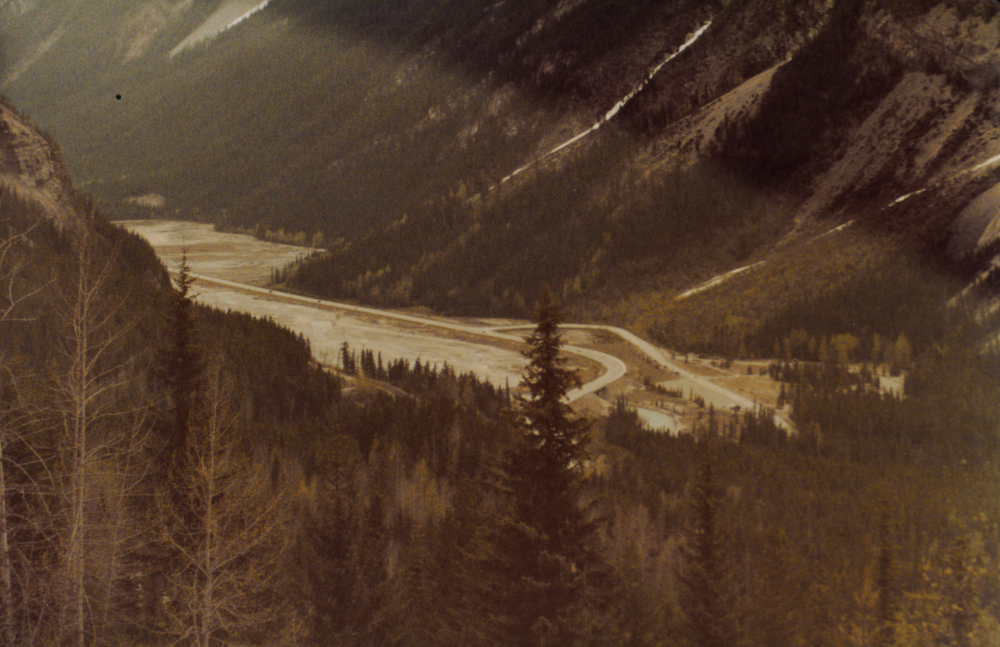 Here is the valley (mud flats) of the Kicking Horse as it approaches Field.
The Trans-Canada Highway is the through road which you see.

Here is a similar view of the Kicking Horse Valley.
This is a terrible image - and what was 'airbrushed' away in the left foreground?
But notice the water tank between the power and the valley. 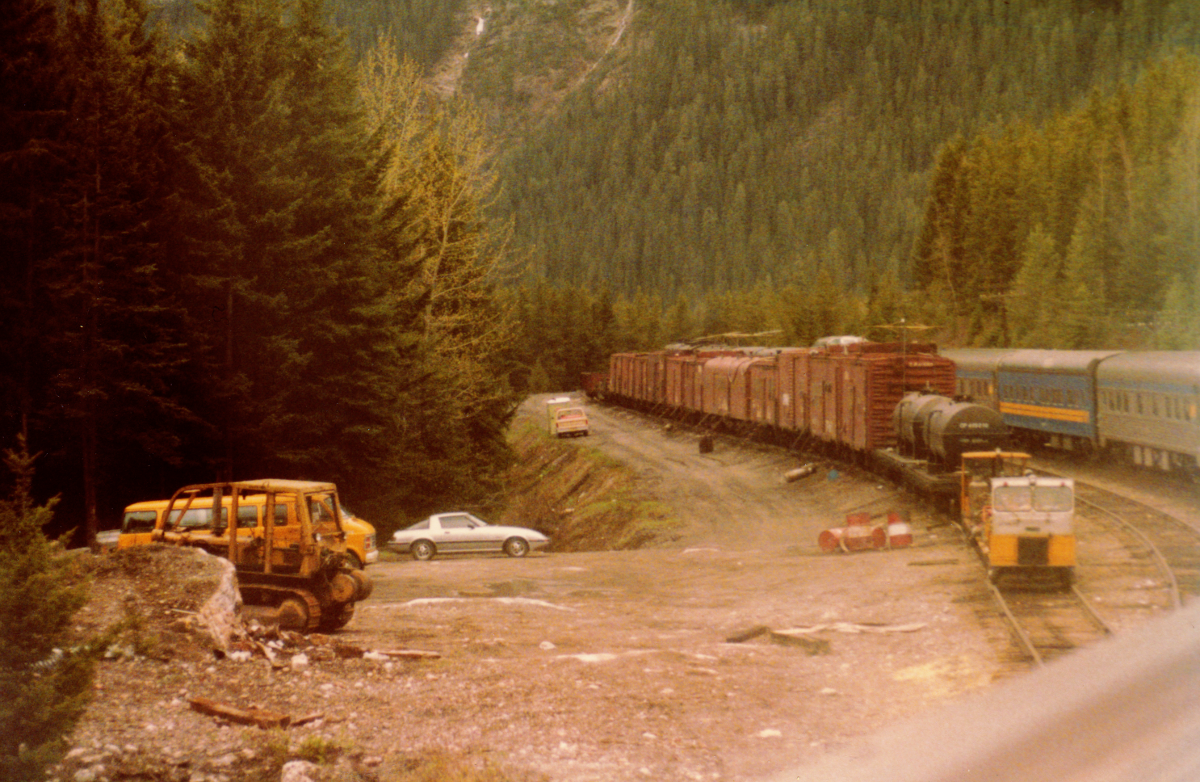 I assume we are rolling by Yoho here. 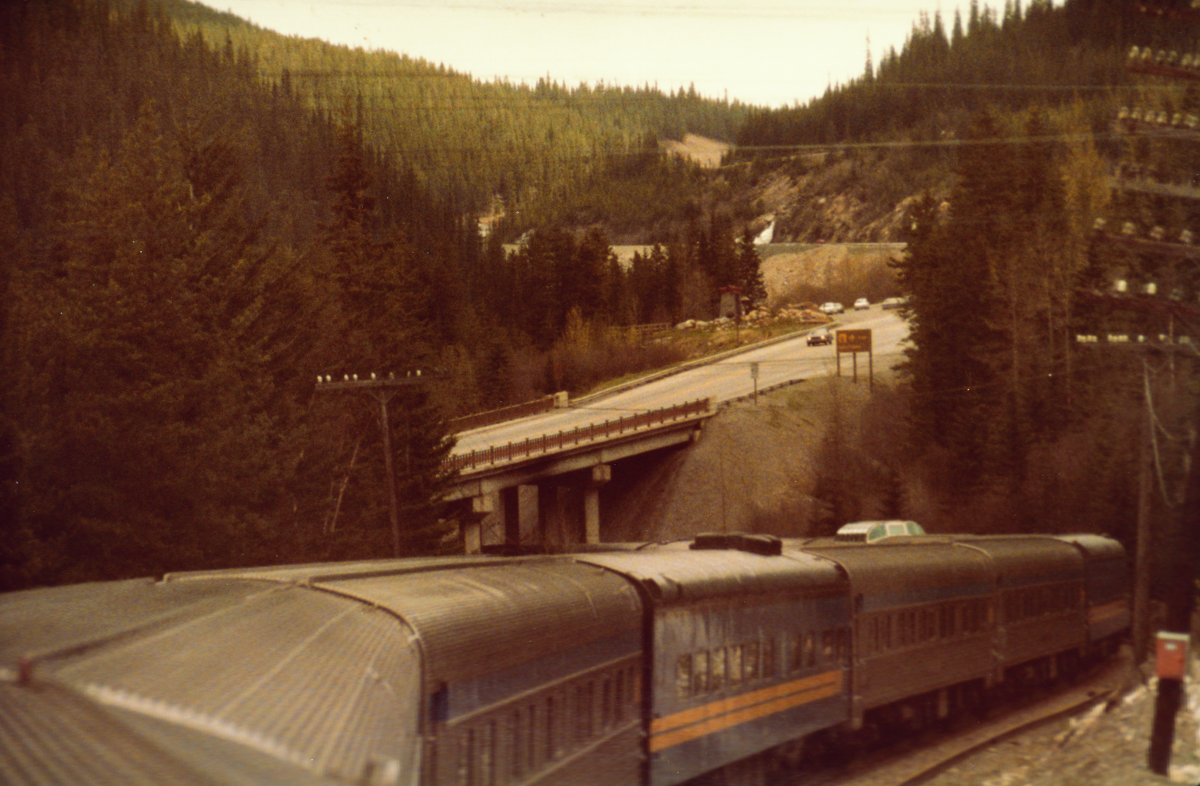 By rail or road, this is always an interesting location for telephoto shots.

You can imagine trains of the 'Big Hill' era coming down something like the gradient of that road. 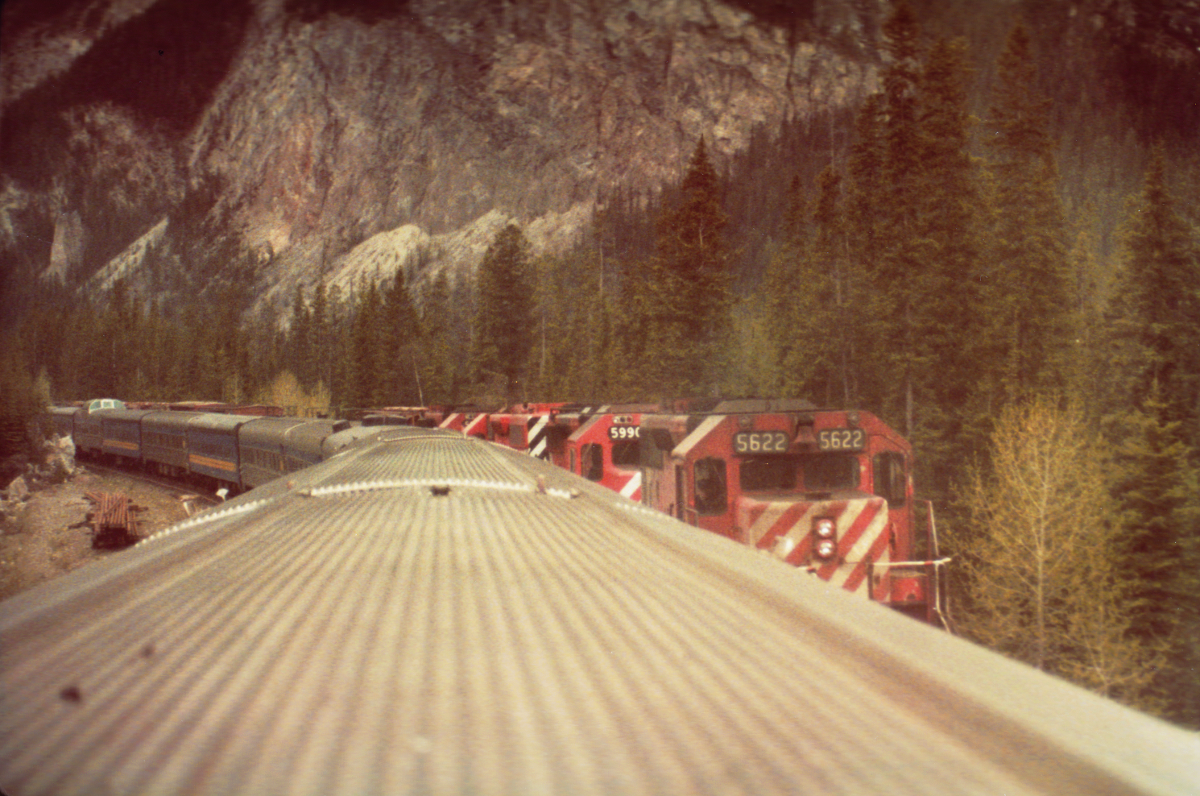 The eastbound freight is clear in the hole for us with its headlight extinguished. 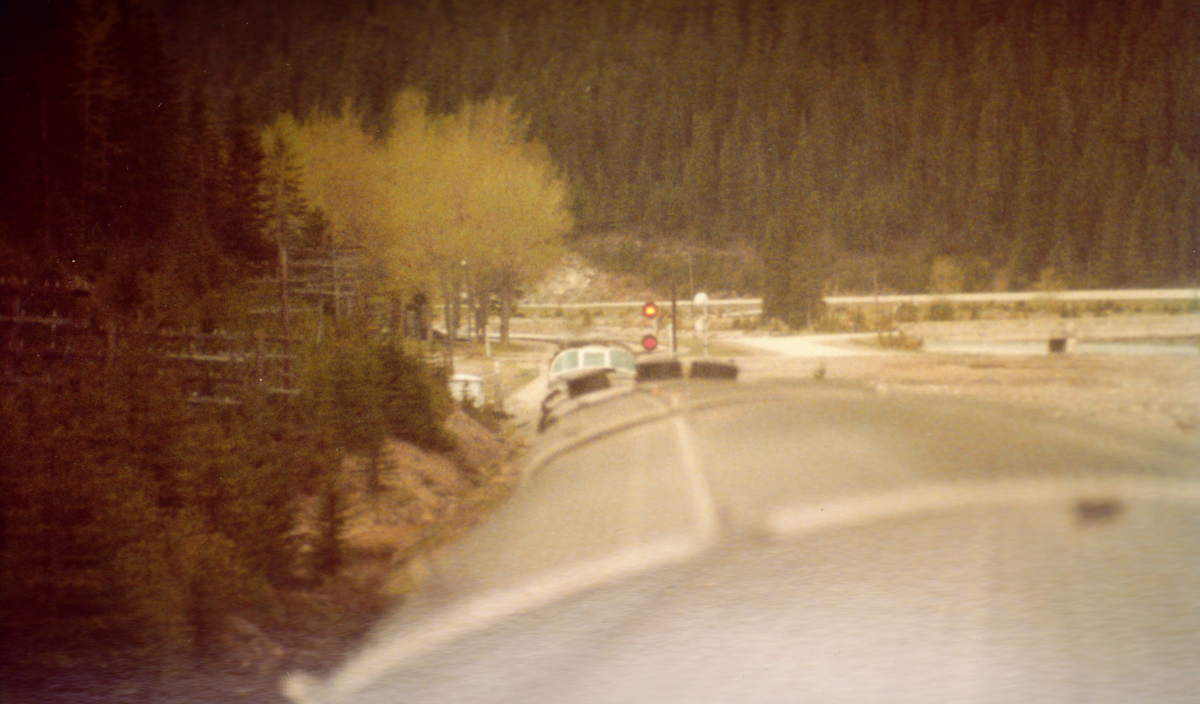 I can hear Rolly saying it: "Straight Approach!"
Our power has not yet knocked down the light at the east switch, Field.

Officially, back then, this was known as an approach signal ...
but the 'straight' underlines with glee the idea that we are lined on a non-diverging route.

I tried to select a couple of passenger timetables with the most interesting details.


This late-Great Depression timetable shows three trains operating. While most working people were probably not doing well, the CPR still advertised its hotels and the nearby 'dude ranches' - someone, somewhere, still had money to spend. The 300-series 'motor trains' are interesting - Regina to Moose Jaw.  ... And 'meal stations' - mainly for people riding in the coach and colonist cars, perhaps.


Don't blink, or you'll miss the short run of CP's Expo Limited. Both railways ran extra trains to accommodate people wanting to visit Expo 67 in Montreal (and/or to see Canada by train as a personal 'Centennial Project') ... during Canada's Centennial of Confederation. There are some nice photos and summaries of the mainly standard equipment used on this train which you can find on the internet.