With the arrival of 'vacation weather' we find ourselves in Sault Ste Marie in June of 1993.
With coaches only, this would be the Agawa Canyon train.
Retired VIA cars are now in the consist.

Looking from the hotel to the American side, we see an upbound freighter heading for the large locks - which are on the US side. 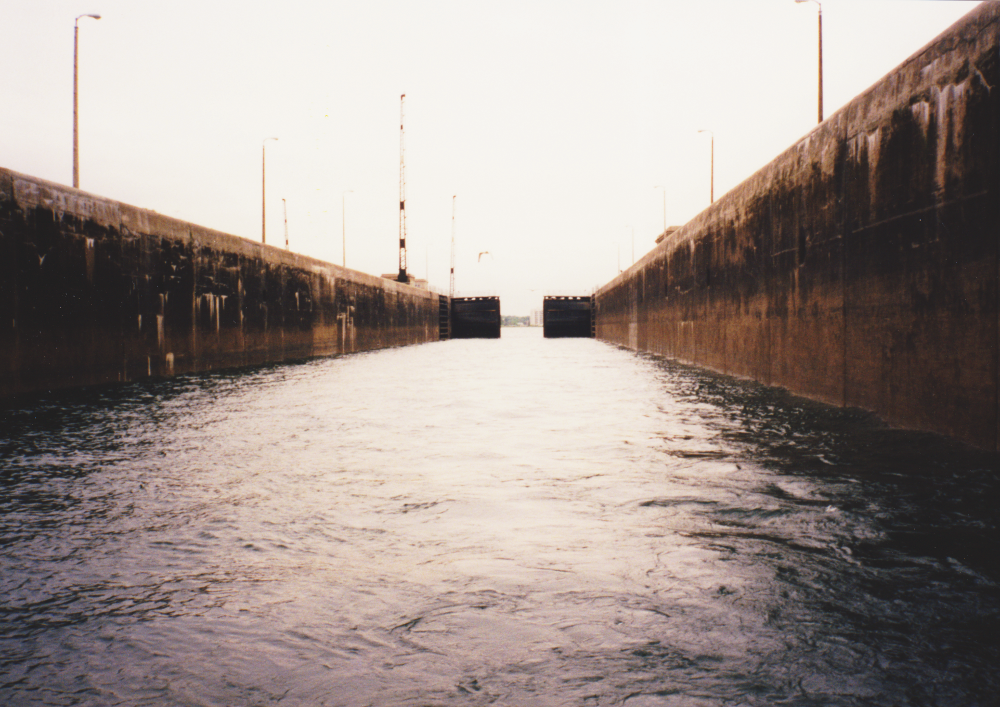 Here is one of the Soo locks on the US side which can handle today's large lake freighters. 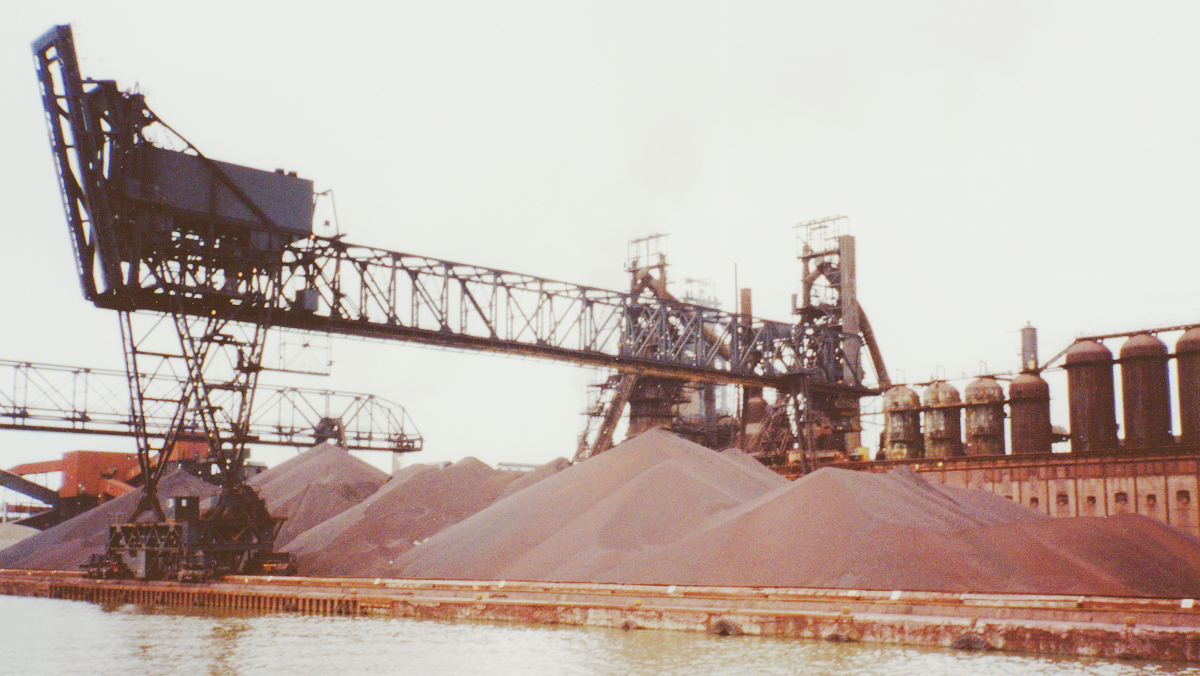 At Algoma Steel, this would be the iron ore dock.
I don't know if the top-charging furnaces at the right were still used in the early 1990s. 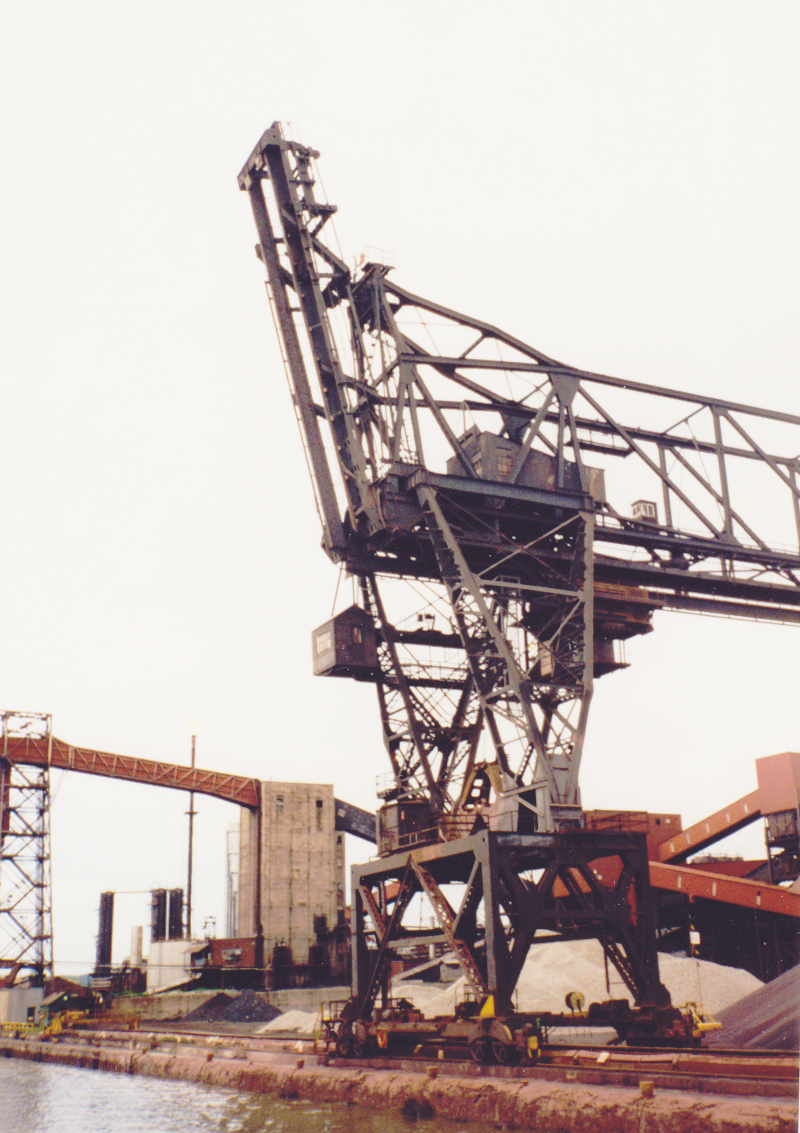 A closer view of the crane. 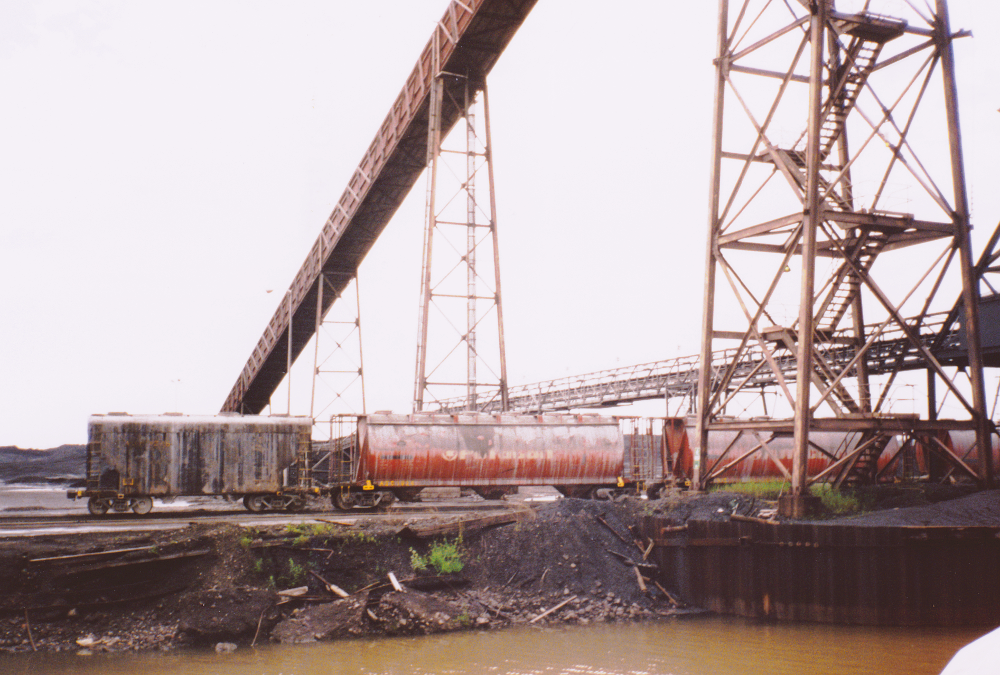 Steel mills aren't the most ecologically-friendly places.
The covered hopper car in the centre bears ASC reporting marks.
The jack points (for re-railing) are probably well-hi-lited in yellow for good reason.
A nice 'weathering' project for a model railroader ... 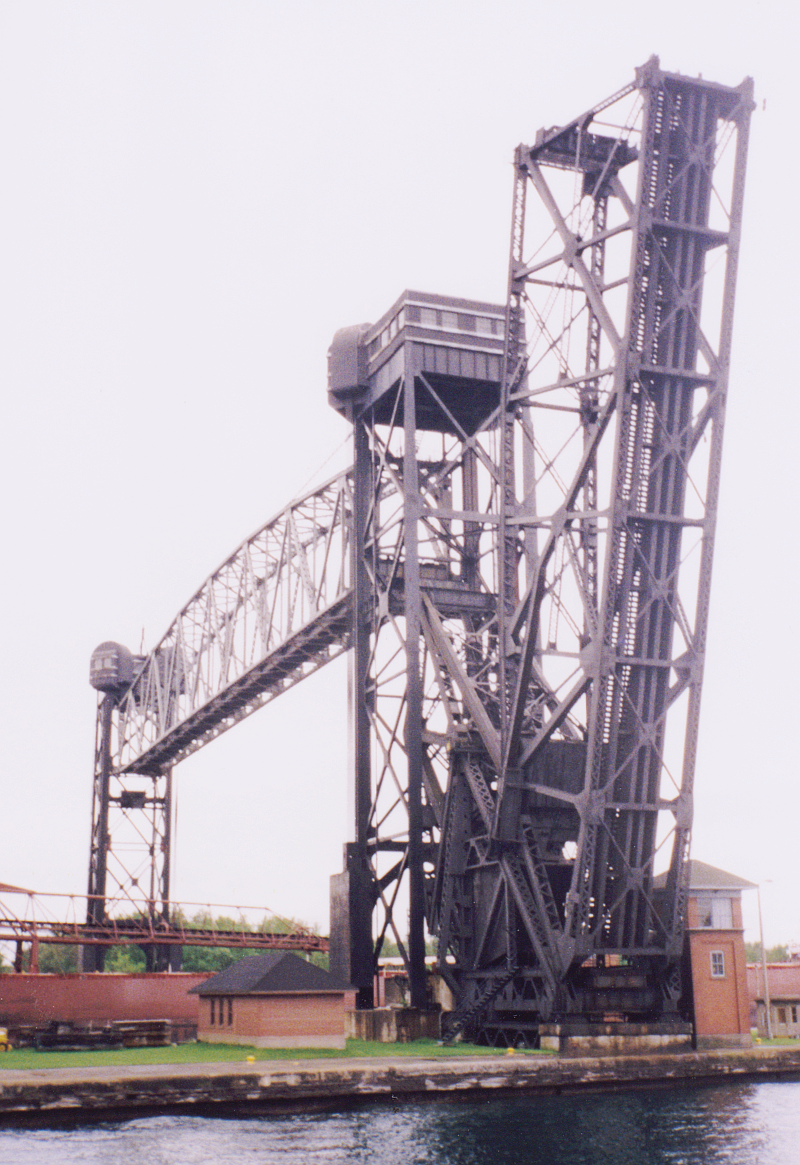 Here is some detail of the US (ex-Soo Line) railroad lift spans.
A self-unloader is passing upbound through the far lock. 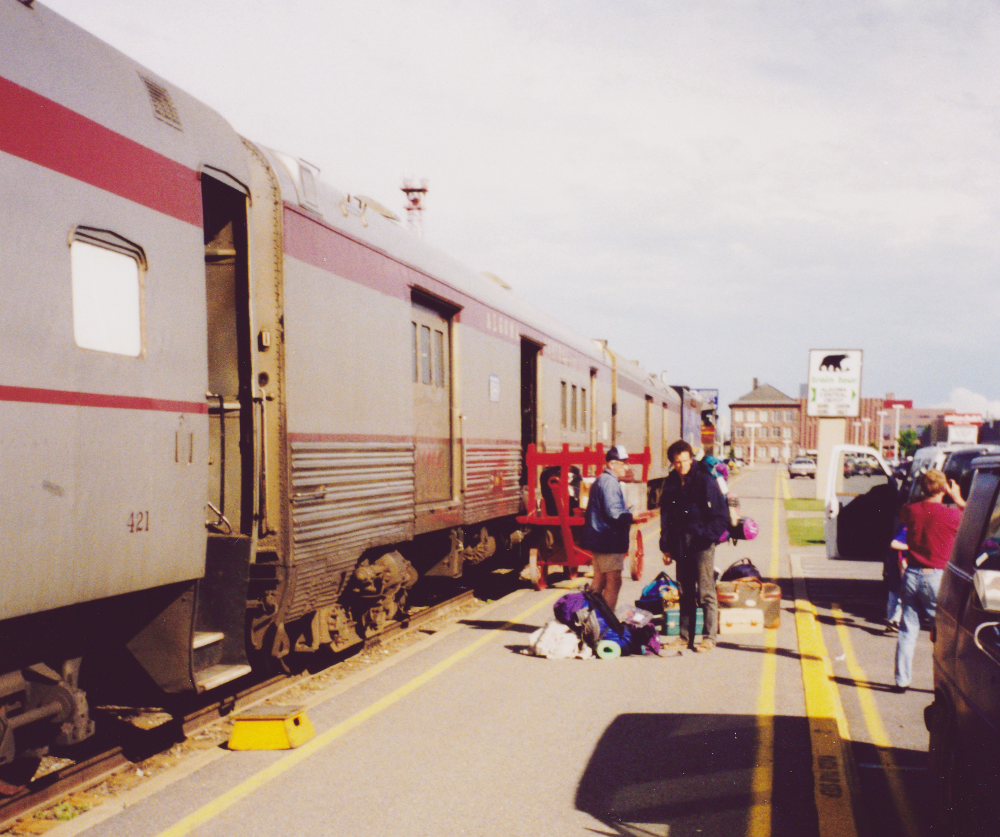 Nicer weather greets the 'Tour of the Line' train from Hearst.
Railcars of diverse heritage, and an ex-VIA steam generator can be seen.
Some of these people may be cottagers or campers from sites accessible only by rail.
The three-storey railway headquarters can be seen beyond the yellow bumper on this track.

Engine 5248 leads what is probably train 359 - Winnipeg to Prince George.
Its opposite number 358 returned with BC lumber.
I remember this easy-to-spot consist being a regular sight in Portage. 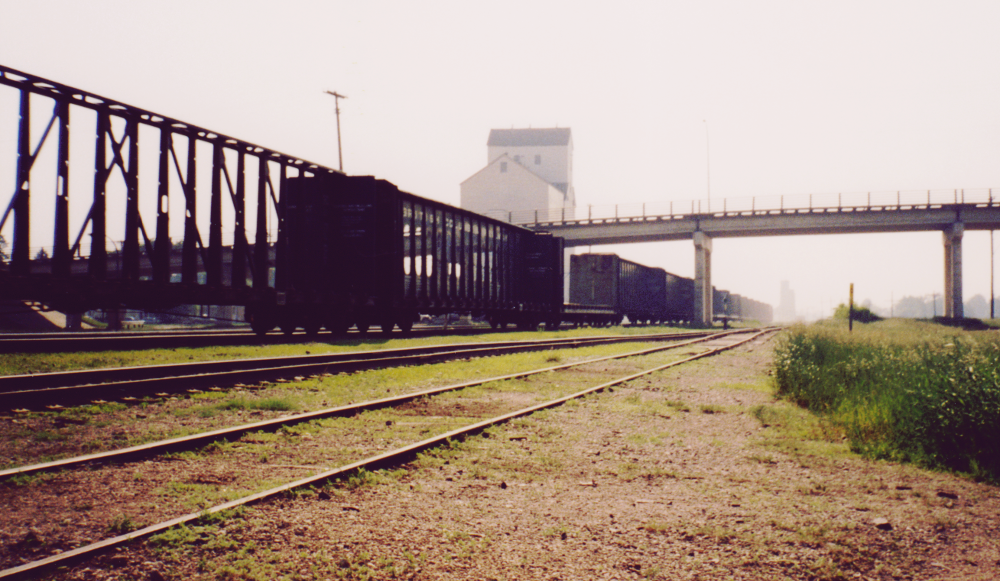 My excuse
On this vacation, I was using our Canon point and shoot camera with a flash (a novelty).
The fish-eye tendencies of the small plastic lens distorted photo edges.
It also darkened the periphery of the photo.
The camera would have been ideal for photographing two people and a birthday cake in a basement,
... rather than long, thin trains on the prairie.

The tracks in the foreground are the pocket track for car loading and the yard lead.

We tended to visit in June or September and it seems unusual to have fog in Portage.
I don't know if this is 'June Portage Green' or if the commercial photo printer was set a little too green.

The CNR Portage la Prairie station.
Formerly, the 'union station' for the Grand Trunk Pacific and the Midland.

I paid more attention to the local track layout during this trip.
That is why this photo at the Tupper Street overpass is included.

The same train begins to 'take' its light at Stephens Avenue.

The 5725 is westbound at Tupper Street with a short train.

Heading into the fog, the 5725 is burning at least some of the fuel before it exits as smoke.
The van-less tailend still seems strange at this point.

At first, one travels across Canada with paper maps, no cell phones and using 35mm film which is expensive and often disappointing to develop.

... Now, with the internet, it is possible to understand what you photographed ... and to make the paper photos at least useful to a limited extent.

At first, we both understood that the plant above 'Crested Wheatgrass' was a native species which superbly demonstrated how natural selection enabled plants to survive in the prairies during dry years. We understood that the bison once enjoyed this grass.

... Now, we can say that this plant was indeed dug up in 1937 and that some native plants can obtain moisture to depths of up to 20 feet. However, this plant is an introduced species from Siberia and Russia which was planted in an effort to reclaim areas which had been denuded of their original vegetation but which (to the chagrin of settlers of the early 1900s) could not be successfully and permanently used for crop agriculture. Today, stands of this plant may be crowding out native species where it was planted ... 'natural' undisturbed prairie was already rare after the settlement boom.

Lesson of History: While the railways (who had been granted the land assets) and the politicians (as they understood the facts at the time) had reason to optimistically promote many dry areas for cultivation ... Areas of the west could have been left for the bison and other native species - if only to maintain biodiversity.


Behold the fossilized tracks of the extinct Canadian. This train ran between 1955 and 1990 using equipment which was usually sheathed with fluted stainless steel. It was operated by both the CPR and VIA Rail - primarily over the former's tracks.

With major changes to Canadian railway regulation in 1990, the Canadian's original route over CP rails north of Lake Superior and through the southern Prairies and Rockies was no longer used - in favour of a CN routing. Many would argue that the CPR route was the more scenic. Many senior CPR running trades employees (e.g. Rolly Martin) chose to retire rather than to return to freight service.

This little connecting track was built for VIA's Canadian. Thinking of it from the west end of Portage, the track began at CP Shepp, it ran east to connect to the CN main line through Portage - enabling the train to serve passengers using the CN waiting room at Portage. The Canadian then followed CN rails to enter Winnipeg and to use the CN (formerly 'Union') station there.

Looking at it today, I suspect this little VIA 'railway' was designed to be long enough that CN and CP dispatchers could 'store' the train there if traffic (freight train) conditions made that move advantageous. 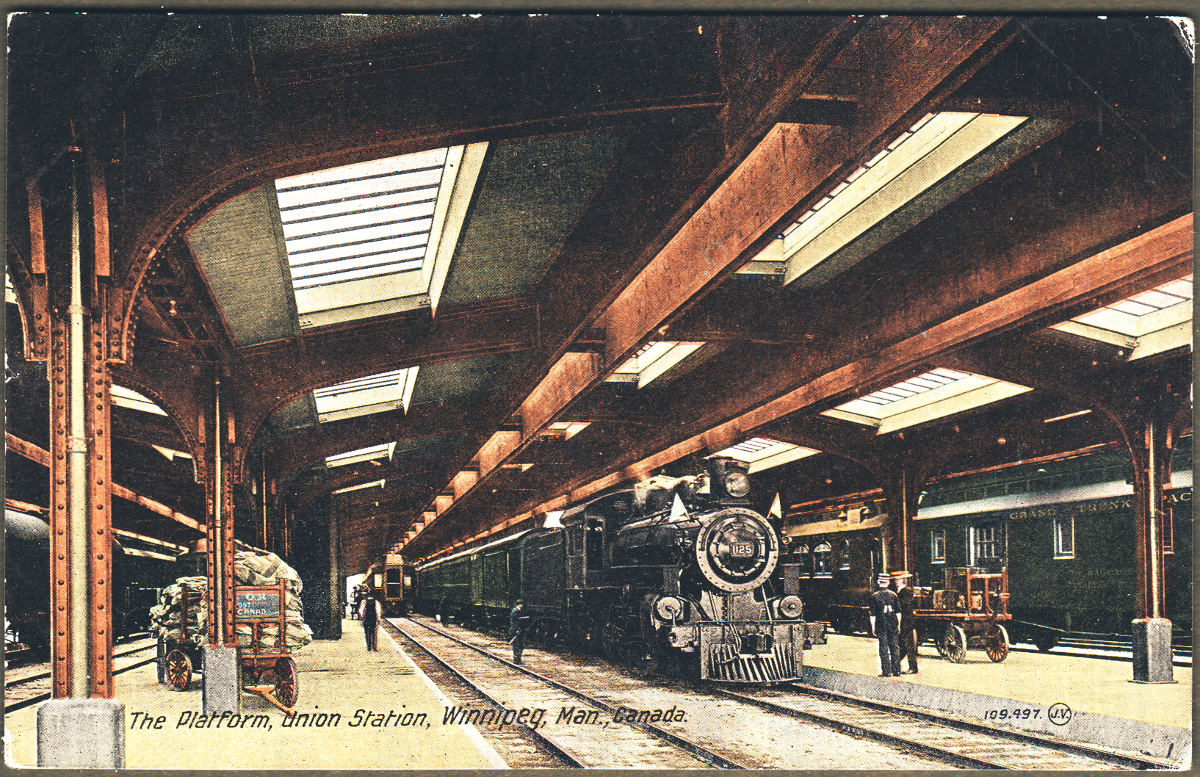 An unused Valentine and Sons postcard of Winnipeg's Union Station. The Canadian Northern Railway engine 1125 was built by Montreal Locomotive Works in 1912.

To the left is a wagon of 'George V Rex' Royal Mail. Perhaps it is a carman/machinist with a hammer who is seen in line with the end of the 1125's tender. To the right, are passenger cars lettered for the Grand Trunk Pacific Railway.