Our trip winds up in this section.
There are a few interesting sights yet to see.

One type of landscape in Spruce Woods Provincial Park.
This was another interesting and educational experience, courtesy of my aunt and uncle.

The 'woods' are an artifact of a wetter, cooler period of glaciation in this area.
The climate is dryer now and the old forest only survives in remaining boggy areas.

This sand was laid down at the delta formed as the glacial-era Assiniboine River flowed into glacial Lake Agassiz.

On the map below ...
The location of Portage is shown by my blue 'P'.
The centre of this large park is shown at a red 'SW'.
Winnipeg is at the right margin of the map.

Lake Agassiz ranged far beyond the north and south edges of the map section shown below.

As the continental ice sheet began to recede (actually it did so more than once), Lake Agassiz was at first draining toward today's Mississippi River. Later, as the recession continued, this large inland sea drained toward today's Hudson Bay - and that is today's drainage pattern. The series of lines between Lake Agassiz and today's Lake Manitoba reflect the edge of the receding ice sheet in this area.

As the railway names suggest, this map was drawn in the late 1800s. Warren Upham was the first geologist to provide a comprehensive interpretation of how the surface geology of this part of Manitoba came to be. His field work was done for the Geological Survey of Canada, May-July 1887 and his report was submitted in 1890. The rough style of the map printing suggests it may have been considered preliminary.

Of course the one question which springs to mind is:
'How did Lake Agassiz affect the tonnage rating of GMD1's operating through Portage?' 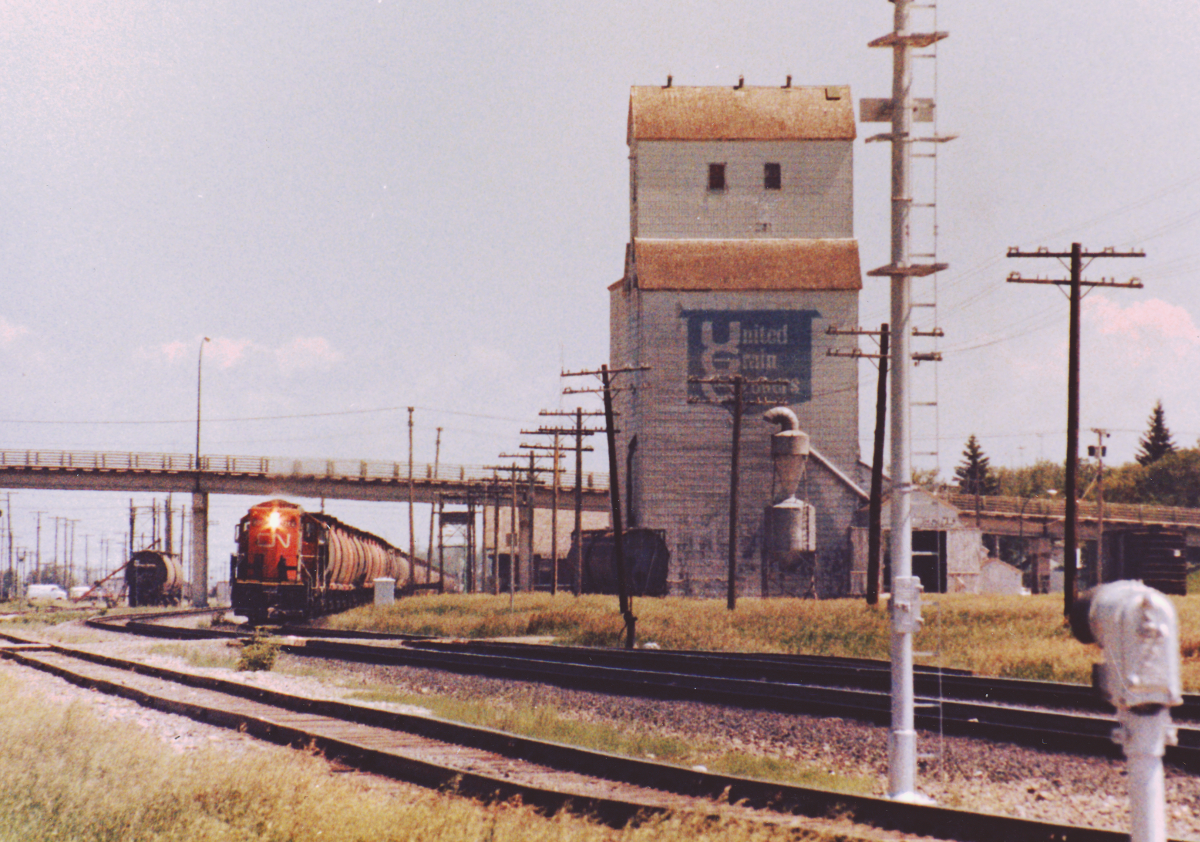 The extra 4266 west approaches Kearns.
A custom shipment of grain is being loaded into the two hoppers on the yard lead pocket. 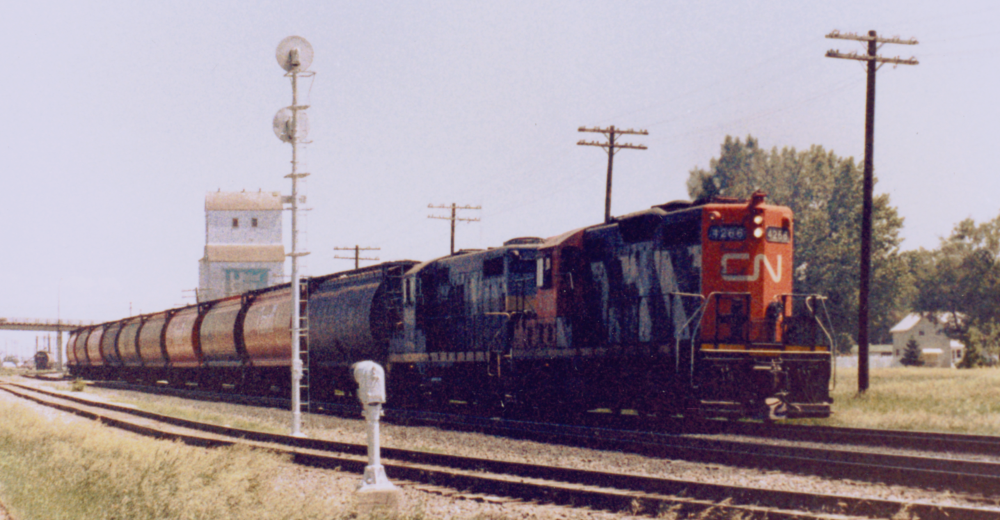 It's the same locomotive consist seen eastbound in Part 5.


In general, relative terms - the chart above shows the tonnage which various types of diesel locomotives can pull. Generally the steepest grade (the 'ruling grade') on a long segment of track is used to calculate a locomotive's maximum haulage capacity for the whole segment. Track curves also cause resistance and this resistance to the locomotive's traction finds its way into more elaborate calculations.

The number following 'GR-' indicates the horsepower of the unit (in 100s).
A GR-12 working well delivers about 1200 horsepower.

People travelling between Winnipeg and Portage for the first time are astounded by how flat the land is. And they are forgiven for extrapolating that the Prairies are like this all the way to the Rockies.

People interested in railways are astounded by the length of trains which just one or two units can pull in this part of southern Manitoba.

The land seen between Winnipeg and Portage is the former floor of glacial Lake Agassiz.

While strong currents carrying erosion products deposited sand in Agassiz's Assiniboine River Delta as they slowed - as seen above at Spruce Woods Park ... the inland sea above Winnipeg and Portage was much more placid ... and rich silt was gently and uniformly deposited to form this extraordinarily flat land.

On the cross-section above are C(algary), R(egina) and W(innipeg). Travelling west of Winnipeg there is only a slight incline shown in this exaggerated profile. The Manitoba Escarpment marks the western boundary of Lake Agassiz.


Over a century ago they were quite adept at producing data-dense infographics. First, take a minute and check on your favourite small Great Lakes port or east coast railway line!

(In 1985, sort of like 1913 Prairie wheat, we are gradually moving east - reluctantly going back to work - as our visit to Portage for this year has ended)

Above, you can see clearly that Montreal just 'eats' some of the wheat.

And notice how little wheat moves on the 'all rail for export' stream in northern Ontario. So the old autumn 'grain rush' - first by rail to the Lakehead, and then east by freshwater - was a significant phenomenon.

And all this 'eastern Canada handling' contributed to Prairie farmers yearning for better prices through someday getting a western tidewater port on Hudson Bay - eventually this was established at Churchill, Manitoba.

As we head east, we stop briefly at Headingley to see a time-honoured operation.
A westbound way freight is setting off a couple of empty cars at the elevator.

A new combine, with its header stowed longitudinally on the car for shipping, awaits unloading.
The first thing to do for switching is to take the derail off (at the yellow post).


Headingley is just beyond the Winnipeg Bypass ring road.
This crew has a full day ahead of them as they work west along the Glenboro Sub.

This subdivision and Headingley appear on the Lake Agassiz geology map as well. 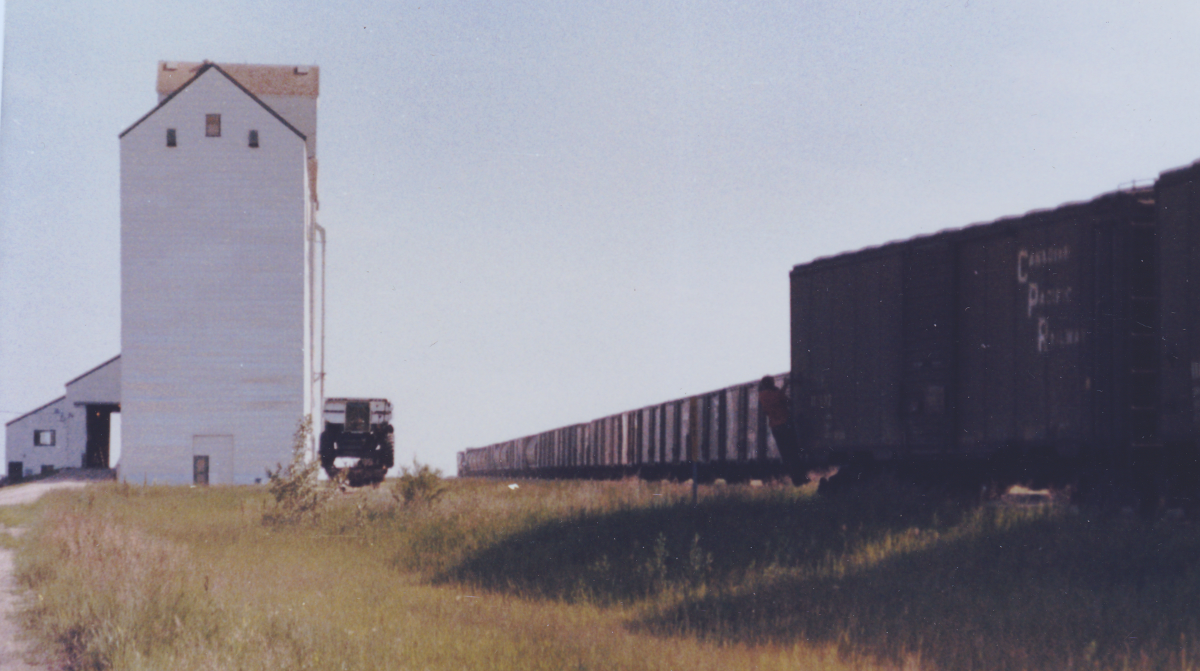 These photos were quite dark with the boxcar sides in morning shadow,
and with unholy compromises made to guess the exposure needed to capture all the surfaces. 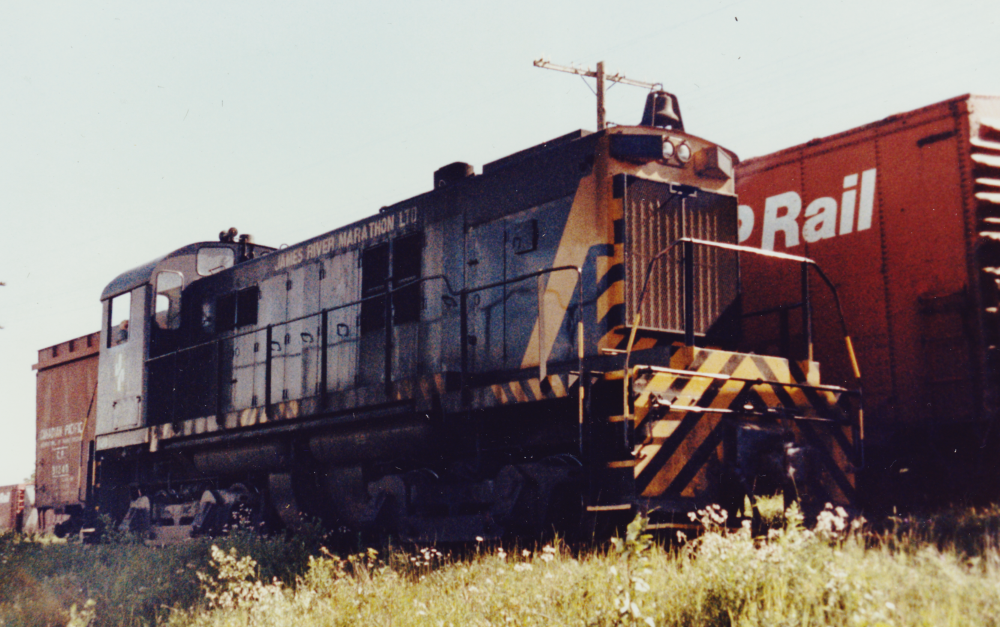 Finally, at Sault Ste Marie - what we found. 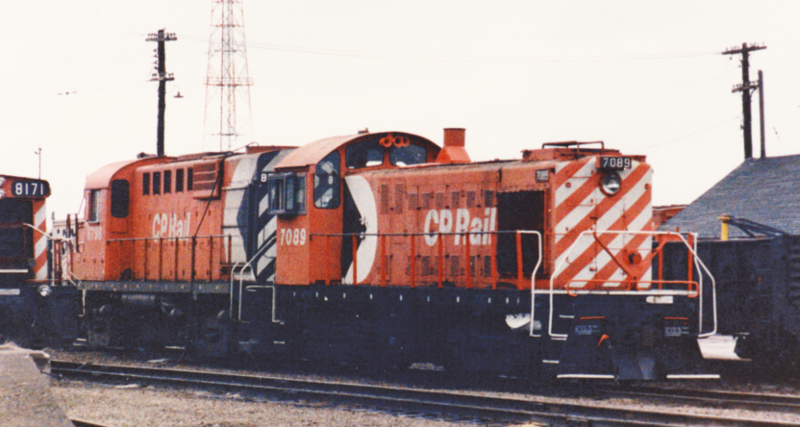 
Sault Ste Marie, with north at the top of the image.
The CP yard is shown at the red dot.
The ACR yard and shops are marked.
The Soo Line yard on the US side is marked at the lower left corner.
The swing bridge over the Canadian Sault Ste Marie canal is to the right of the yellow 'S'.

A Soo Line freight waits for the interlocking signal at the swing bridge to cross to the US side.
The camera is facing approximately south.

The semaphore signal clears, and the train begins over the Canadian swing bridge.
We found the Canadian ground beneath the bridge well seeded with taconite pellets.
There are US lift spans ahead - where the largest ships transit between Lakes Superior and Huron, and thence to Lake Michigan - in many cases. 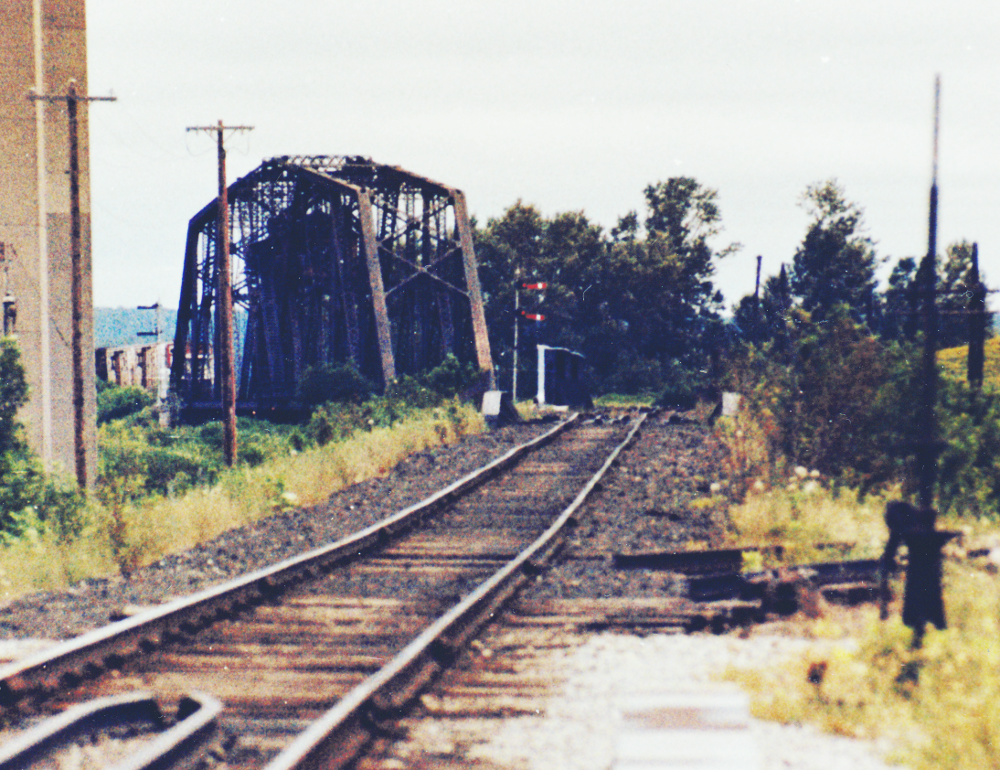 The Soo Line caboose is clearing the swing span, the swing bridge signals are at stop.

Sault Ste Marie circa 1965, with the CP yard in the centre-right.
I think the station and shop are at the curve before the main yard.
Beyond that, and almost at the water, the Algoma Central's three-storey head office is in perfect alignment with this end of the Canadian canal.
In 1965, the waterfront was still industrial - before the mall and the Holiday Inn.

Seen from near the hotel, the two CP RS1200s  are leading a transfer move across to the US.