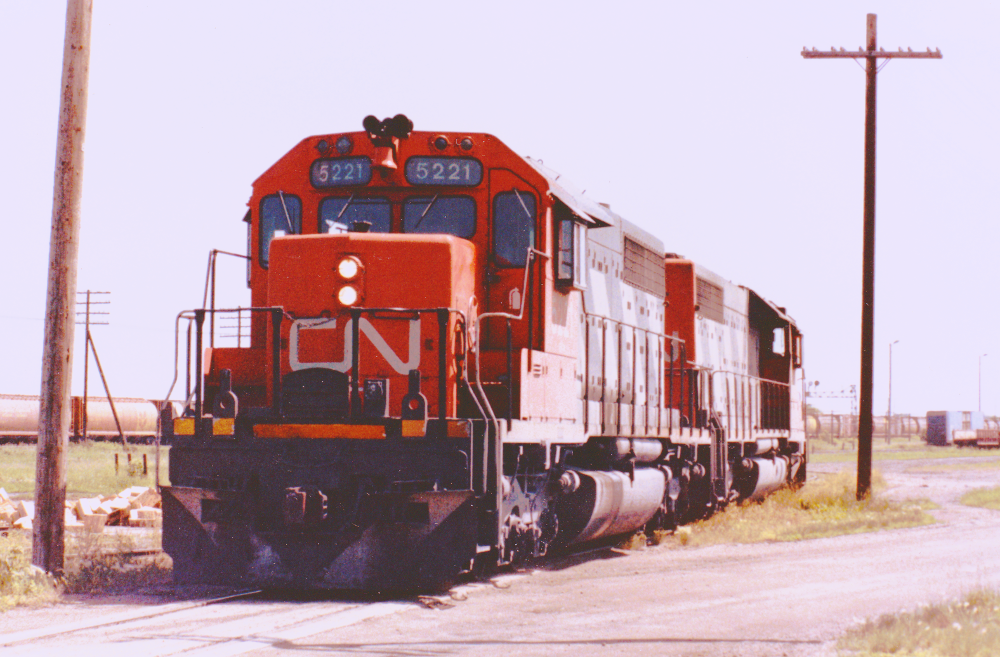 The 5221 has just switched out that blue hi-cube boxcar for CP. The 5221 is back on the train and ready to leave town.

This photo of the extra 5557 west is included mainly because of the diminutive boxcar behind the power.
Even compared to standard 40 foot boxcars farther back in the consist, it looks small.
The elevator here holds chemical fertilizer. 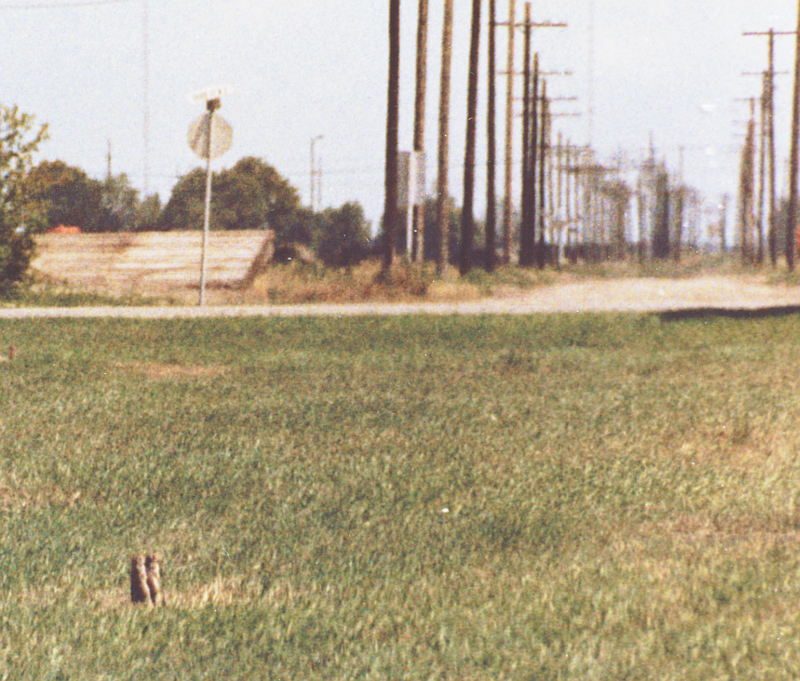 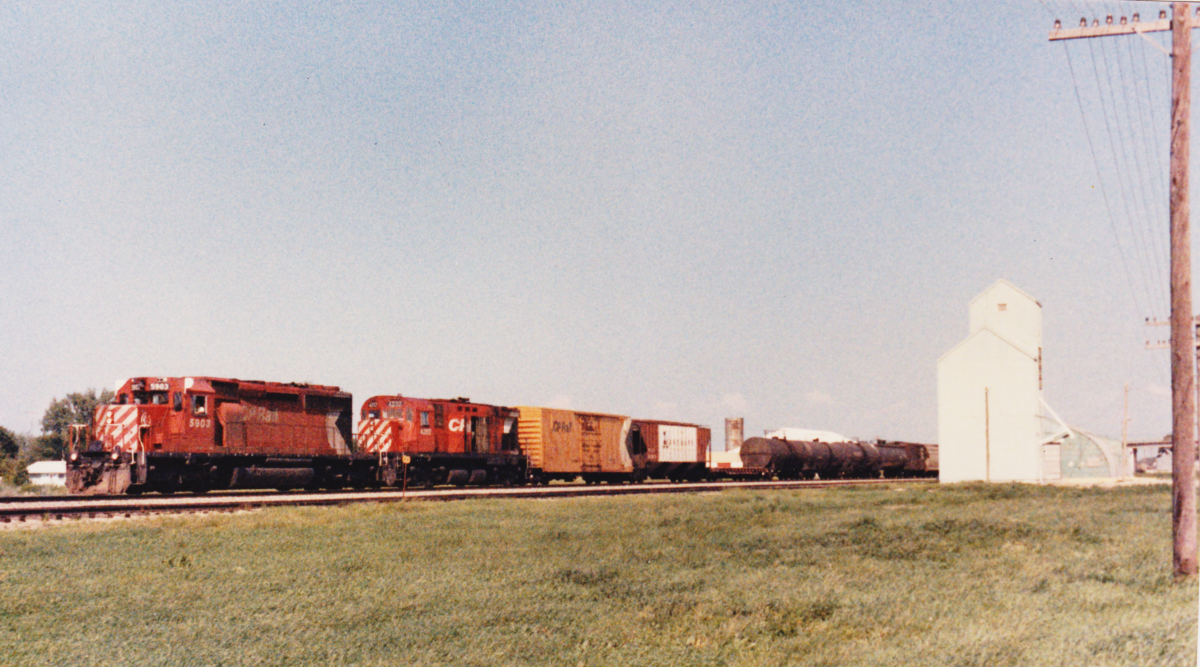 Extra 5903 west with 4202.
MLW (Alco-style) power was rare west of Winnipeg on CP.
I'm not sure, but I think the raw power of the 4202's prime mover has blown its motor compartment doors open!

A Trip to the Manitoba Agricultural Museum
at Austin, Manitoba This Manitoba Wheat Pool sign on the Austin museum elevator shows the ingenious design techniques used in country elevators and it shows this Austin elevator in particular. Before rural electrification, grain was weighed, graded and shipped from country elevators whose only power came from a small internal combustion engine. To avoid grain dust explosions, the internal combustion engine was generally kept in a separate external building with the power coming into the elevator via a belt.

Early in the era of western settlement, milling companies also owned elevators to ensure a steady supply of grain of a known quality ... and probably to make money by controlling supply costs.

The grain started every transfer process in the pit. An endless belt of buckets (the elevator 'leg') gave the grain potential energy as it reached the top of the elevator - the cupola.

Lifted into the elevator's cupola, the 'gerber' was the location where a route for the grain was switched and set ... and gravity did the rest to drop the grain into a storage bin, onto a shipping scale or into a boxcar.

After it was received and weighed, graded and stored ... the grain might make several more trips into the pit and up the leg as it was re-sorted into different bins, or weighed and shipped. 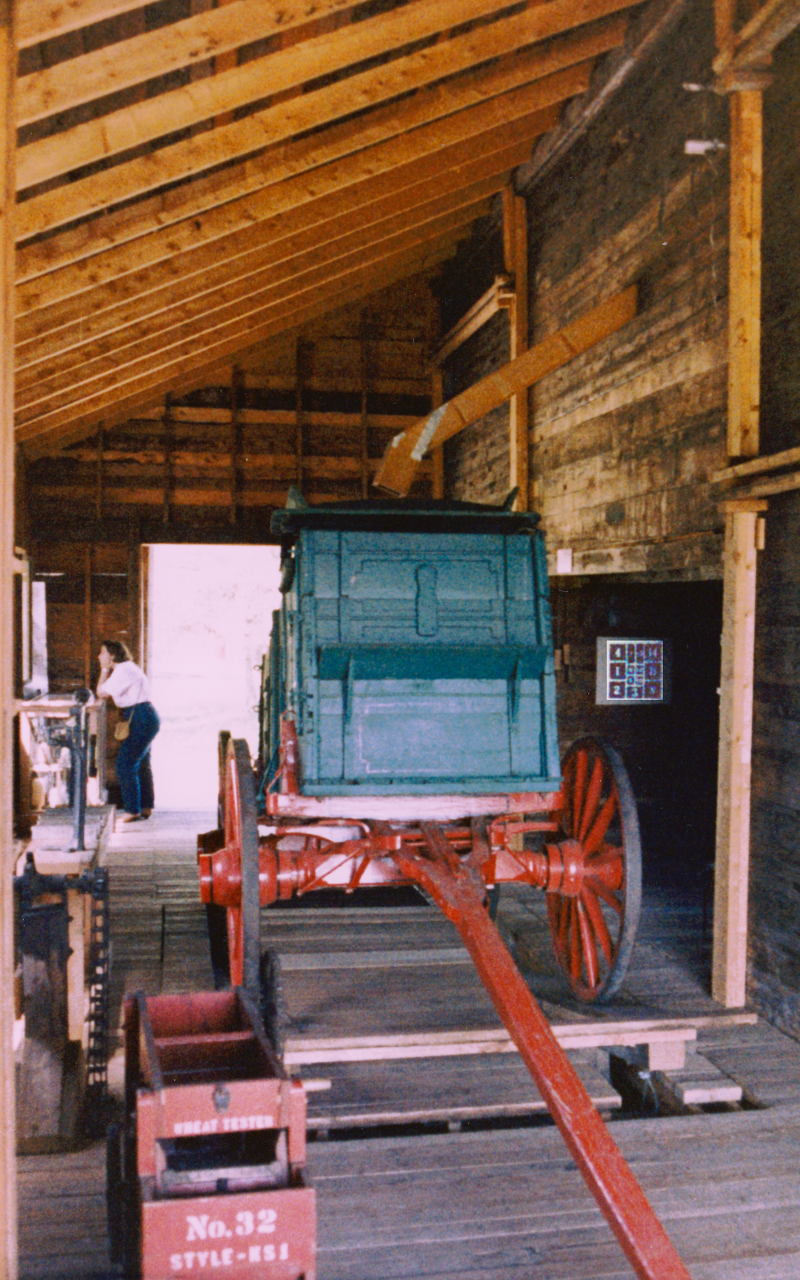 A typical early grain wagon is positioned for tipping into the grain pit.
Gross and tare weights of the wagon were used to calculate the weight of grain delivered.
I have boosted the resolution of the bin numbering diagram to the right of the wagon -
the diagram shows the relative location and capacity of the bins.
In this elevator, the chutes are wooden.
Grain can also be loaded into wagons on the elevator floor. 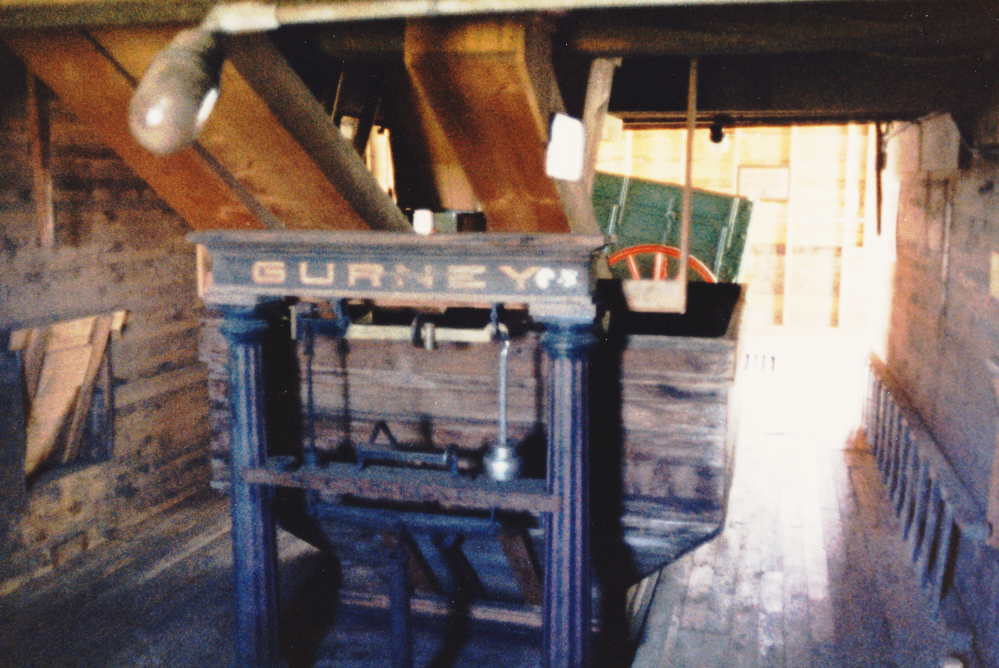 Here is a photo of the shipping scale mentioned in the diagram.

The non-standardized design of early grain elevators can be seen.

The elevators with larger cupolas offered more space for equipment and its maintenance - particularly for the top axle of the leg ... and the gerber from which the grain was directed into different chutes. The Austin elevator dates from 1905 and it does not have one of the 'modern' full width cupolas, eg. as seen on the 'modern' third elevator from the camera.

The CPR station is seen across from the elevators. The device in the right foreground is a main track switch lined for the main track. It's top fitting allows for an oil switch lamp to be mounted at night - by climbing the ladder on the far side - to indicate the switch's alignment to distant, approaching trains.

After I completed this posting, Jim Christie found this excellent journal article about 1917 elevator design. I haven't been able to resolve the smaller text on the illustration, but you'll find a lot of elaboration on elevator design and operation in the article itself.

The station building at Austin is the former Northern Pacific Railway station from Baldur, Manitoba - about 65 km SSW of Austin. 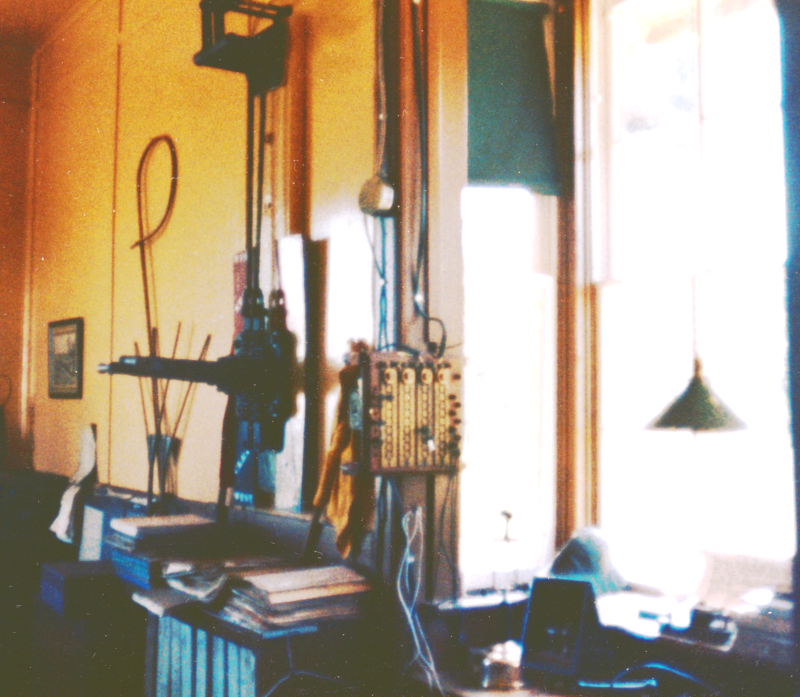 Inside the station we found a nice collection of equipment.
The telegraph switchboard is seen - explained here (Telegraph - Part 6) .
Beyond it are the two black handles for the train order signal.
As a bonus, there is one CP train order hoop on the wall,
and below are two CNR hoop assemblies (V-shaped). This wooden CPR boxcar was built by Canadian Car and Foundry in 1914. While train air brakes had previously replaced manually-applied brakes on each car by roof-running brakemen ... the roof walk would still be used by crew members while switching - to relay signals to the engine from the worker throwing switches and coupling cars at ground level.

If a brakeman was riding a car 'kicked' down a track by a locomotive, this primitive hand brake would have required a lot of force (and time, and probably a wooden club for leverage) to get the chain tightened ...  you can see the chain winding at the bottom of the hand brake shaft. In contrast, modern hand brakes were quicker to apply and had a greater mechanical advantage to stop the kicked car with greater control.

You can also see the old arch bar trucks, and of course, the plain bearing journal boxes.

There is another interesting feature - a poling pocket. This is the raised metal 'cup' above the foot iron at the end of the car. If a crew needed to move a car on an adjacent track (to which the engine could not couple) a stout pole could be placed into one of the locomotive poling pockets and into the car's poling pocket. This dangerous procedure became illegal as the pole could slip or break, killing or badly injuring nearby crew members.


Consider the small capacity of the horse-drawn grain wagon (above) photographed on the Austin elevator floor ... and how long it would take to move a year's harvest to a nearby elevator over dirt roads.

As the Prairies were settled, more and more railway branch lines (map above) were built so that farmers were no more than 10 miles from an elevator. In the 1980s and 1990s, with farmers using large trucks and paved roads, a great deal of the original branchline network was declared surplus and torn up.

A long-eared rabbit is making a move at Third Street. 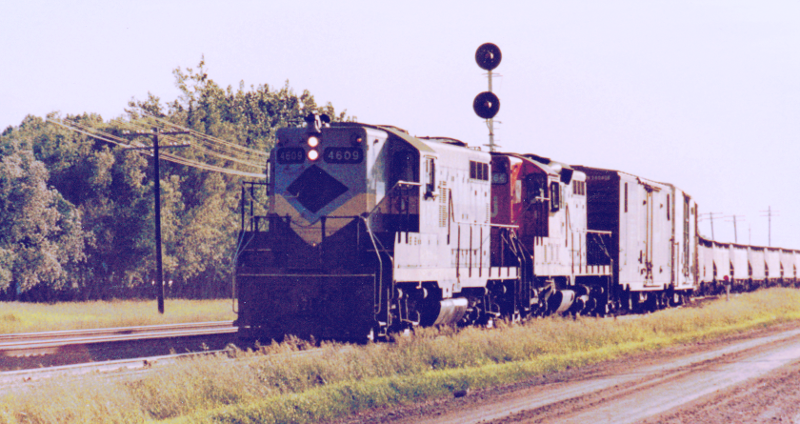 Sophisticated photographers refer to 'The Golden Hours' - the period when the sun is near the horizon, refracting a more golden light and beautifully illuminating, let's say, a child playing with a drinking fountain.

However, if there is an opposite to Gold, it can be found when one is forced to shoot into that golden light - as seen above. In the summer evening, the CN extra 4609 east is rolling into the siding at Portage, probably from the Gladstone Sub. The 'oddly painted' unit leading is formerly of the Northern Alberta Railway - it was jointly owned by CP and CN.

We may have been 'rolling' with my uncle driving, as I was able to take this photo with under less difficult conditions. 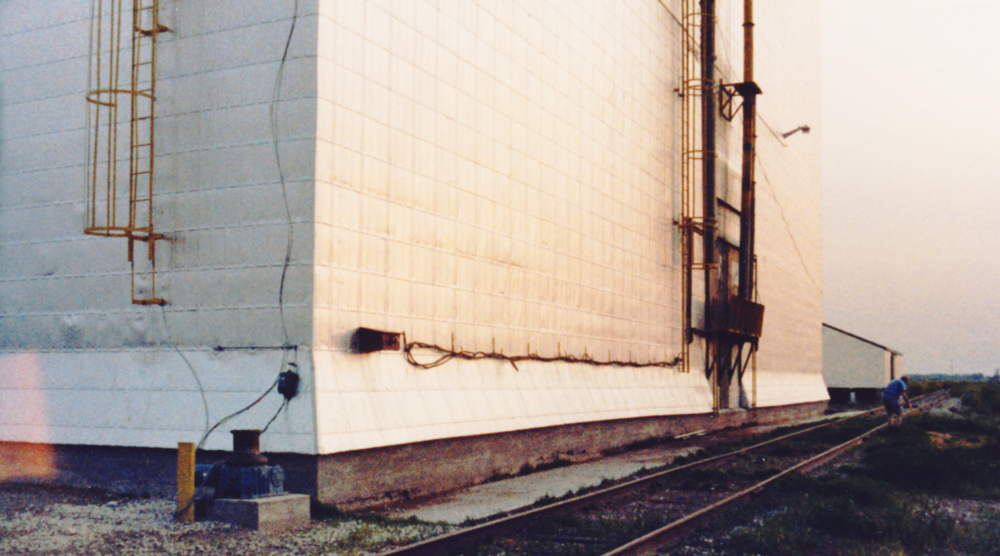 Note the electric capstan and cable hauser for moving cars ... 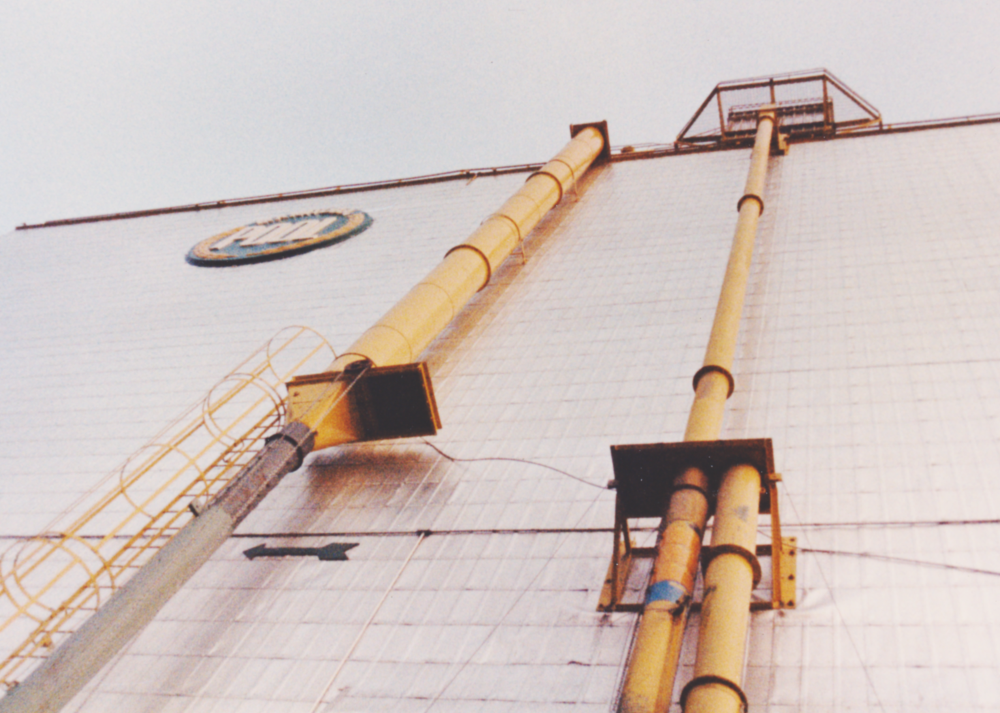 What identical equipment is on both the Austin elevator and this one?
The arrow.

It shows the direction in which the track gradient descends ... downhill.
When train crews spot the grain cars, they are placed uphill -
so elevator workers can move them more easily for loading. 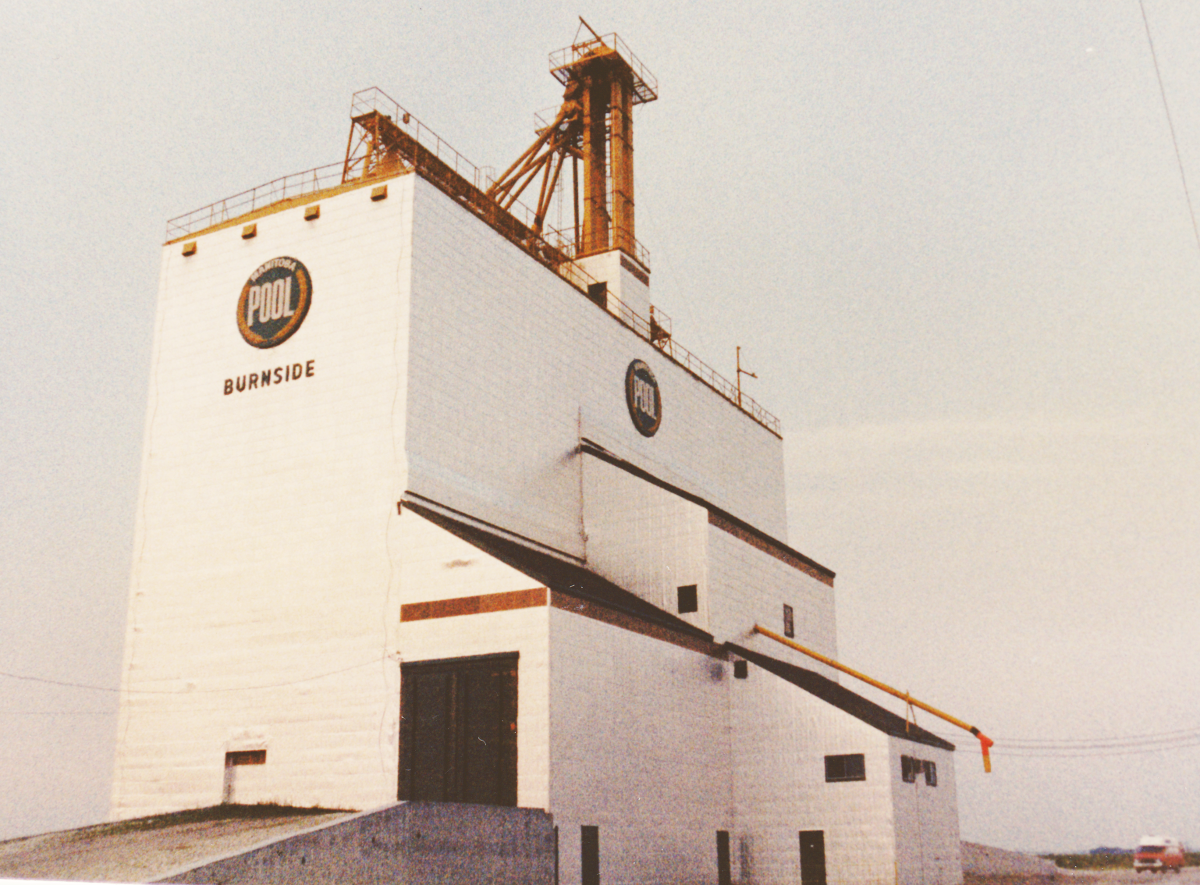 The moving parts of the leg and the gerber are enclosed, but outside. 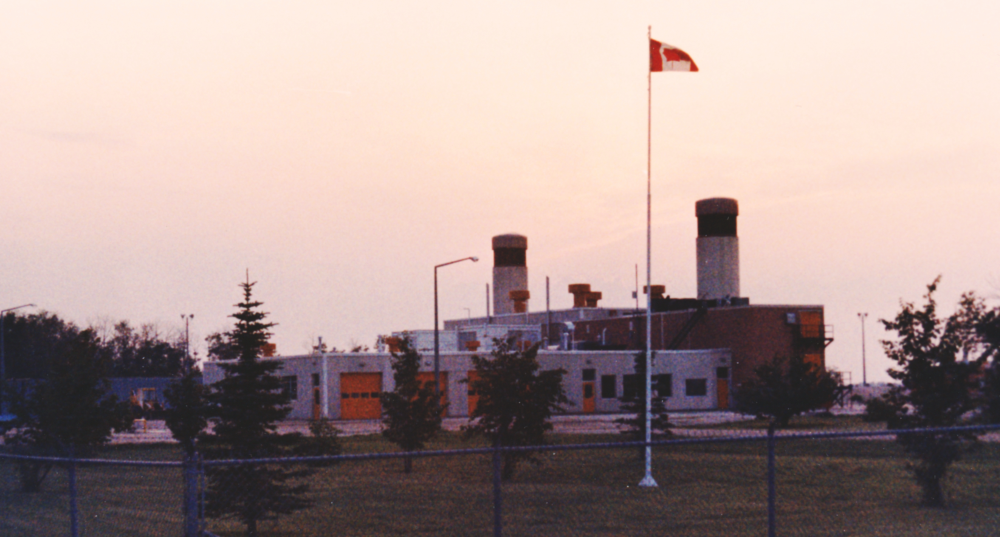 This is a natural gas pipeline pumping station.
The cylinders house pump turbines - which are spun by burning natural gas. 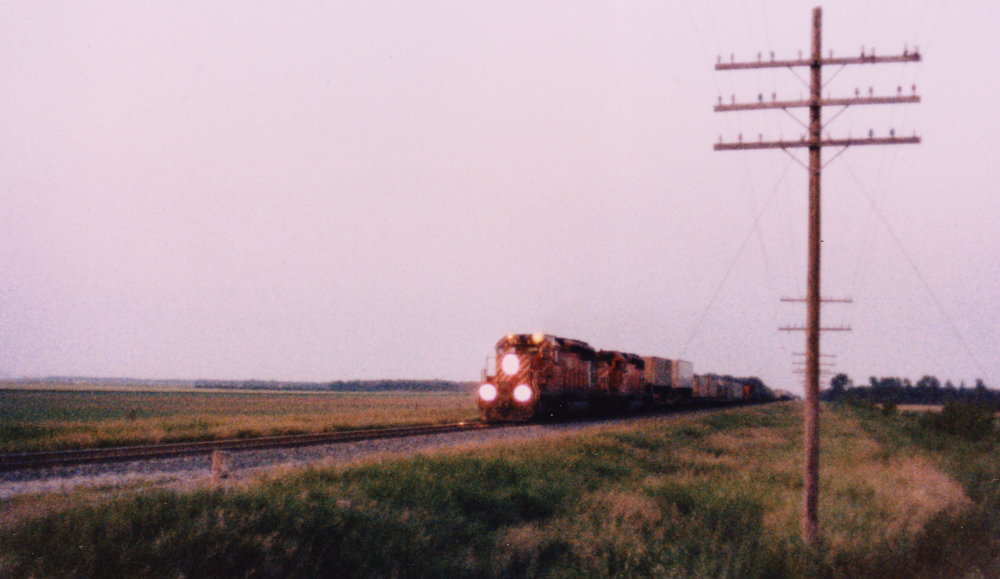 A CP intermodal westbound whistles, and thunders through the quiet prairie evening -
almost a century after the Last Spike.