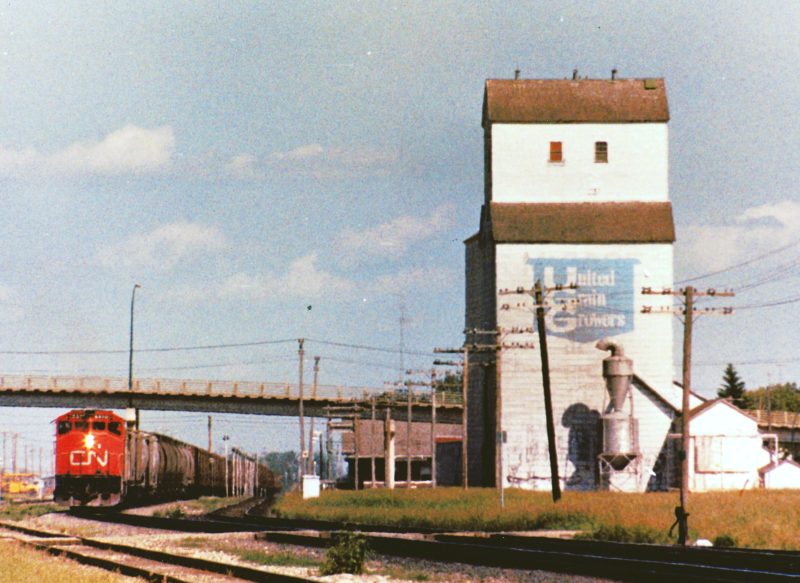 This post will end up in Portage,
but first a digression to a museum 50 kilometres south-east of Winnipeg.

The era ...
This rough postcard was mailed in 1908. The remaining hand-painted pigments are therefore more than a century old.

Oak River is 11 miles north-west of Rivers, Manitoba and was on the CPR Miniota Sub (Brandon to Miniota - 1967 data). Photographed from the next country elevator on the elevator siding, the camera was tilted just a little - it must have been an interesting balancing act. Until the farmers' pools and co-ops were formed a little later in history, private companies made a profit from handling grain.

I think it was a fairly common practice to have the CPR station facing south and opposite the grain elevator. Today the village of Oak River has no railway, but a broad 'park' exists where the railway and its facilities once existed.

At least twice over the years we visited the Mennonite Heritage Village in Steinbach, Manitoba. 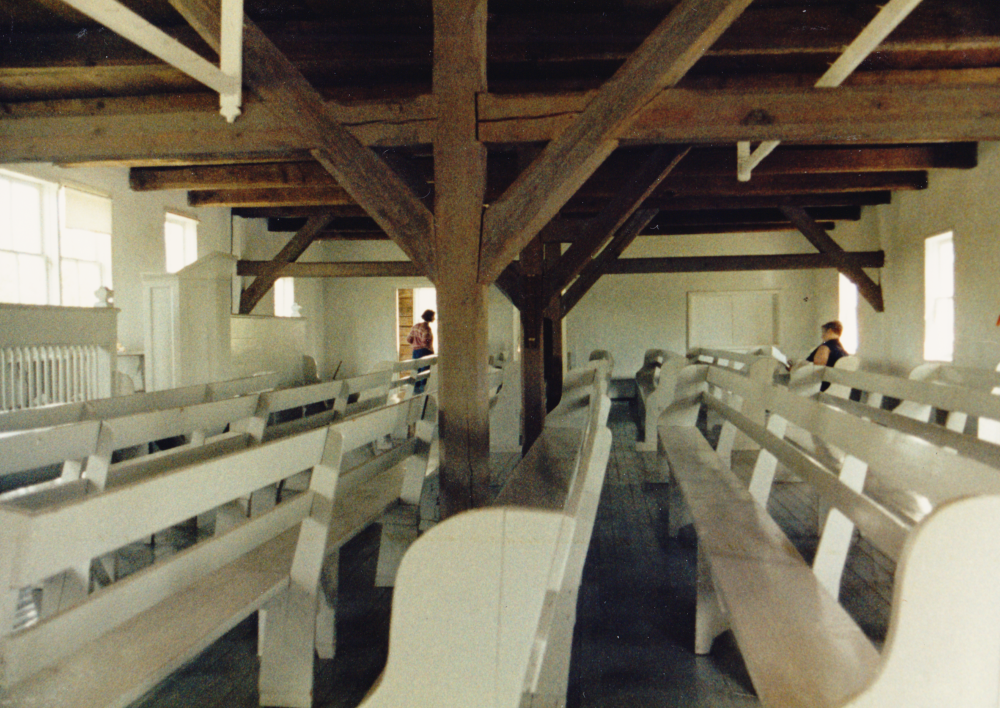 Both the Mennonites and the Hutterites are named after their founders. Two years earlier during a visit to Horseshoe Curve at Altoona, Pennsylvania we had taken a trip to nearby Lancaster and learned a little about another living and active anabaptist movement - the Amish.

Any further generalization I try to make about these groups may be misleading - for example, some embrace internal combustion engines, some do not. To some extent, particularly in the past, their traditional German language helped preserve their identity as it also served to protect them from outside malign influences. 'Language' will come up again below. 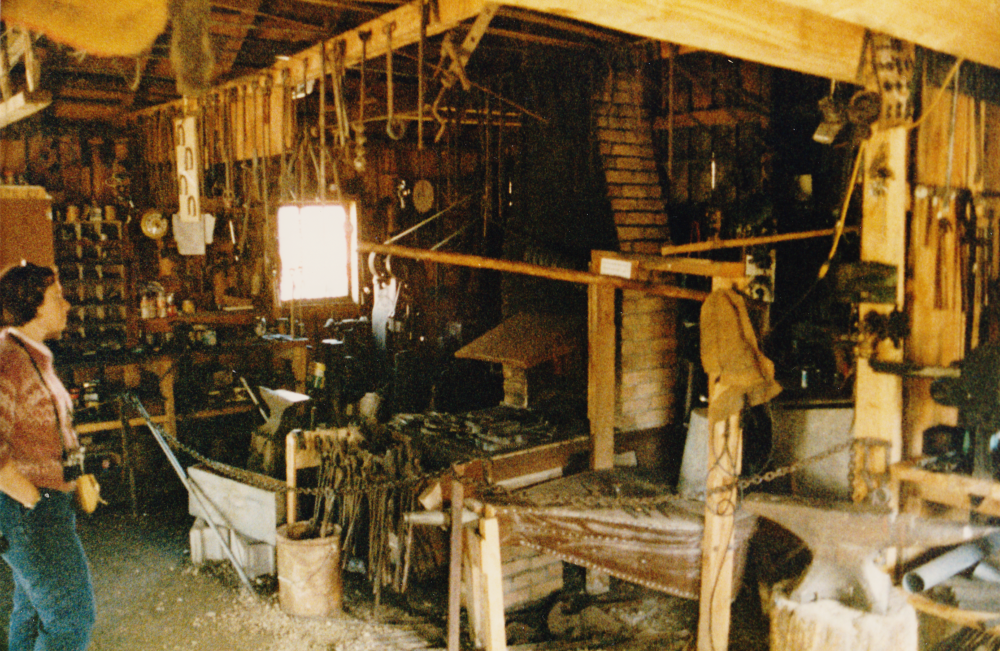 Being an isolated self-contained agricultural community - and this applied to most early prairie settlers - it was really beneficial if most of your needs for metal fasteners, horseshoes, and other hardware could be met by making them to order locally. (For a moment I thought this was a photo of my spouse's current workshop - I should have recognized the warning signs) 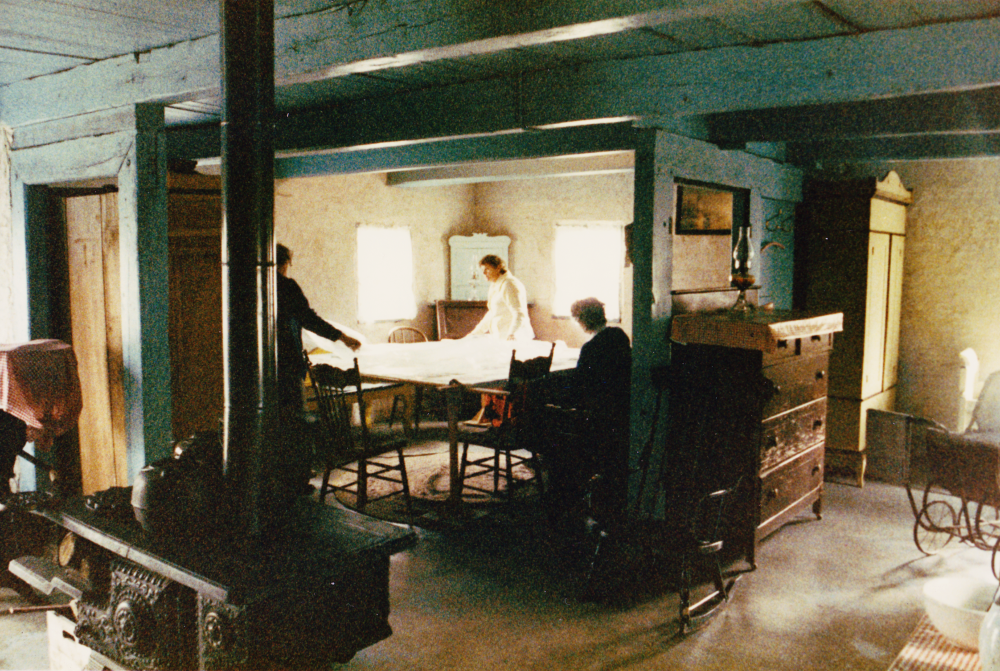 Here is an interior of a typical early prairie home at the Mennonite Heritage Village museum.
Quilting is being demonstrated. 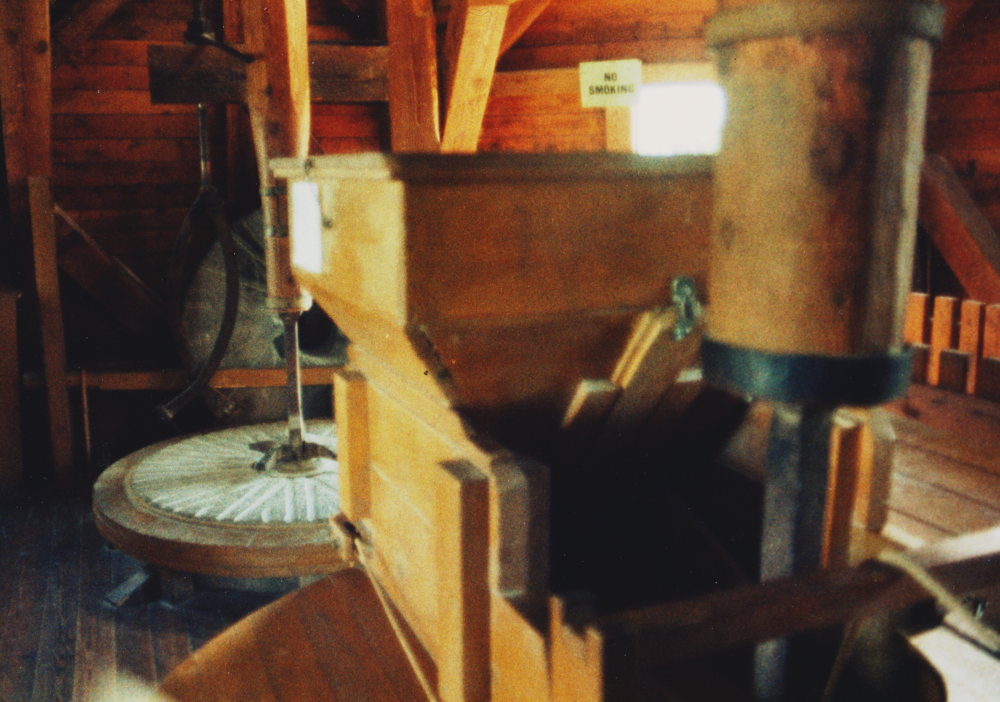 Although I don't have photos of this building's exterior in this batch, here is the milling area of the museum's windmill. Two halves of a grindstone appear near the wall. Close to the camera is a working grindstone with the wooden hopper into which the grain was poured. The large interior driving wheels and even the gear teeth of this mill are fashioned out of wood. 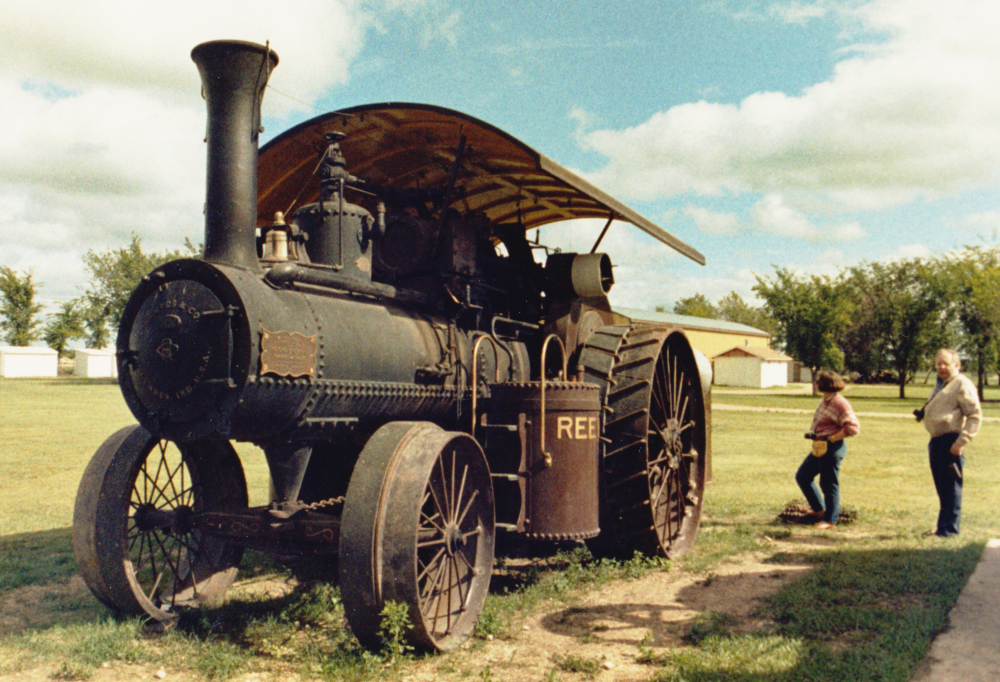 My uncle has brought us to survey their collection of steam traction engines. Steam engines in 1900 were generally powered with heat-dense coal, but on the prairies even plentiful waste straw (aka 'biofuel') was used to fire these engines. While you might think these metal wheels would be hard on the paved or macadamized roads, there were very few of the latter around to damage.

We now leave the museum.

Here is another postcard which was hand-coloured in Britain by artists who never saw the original subjects (sadly).

Horse-drawn binders have cut and bound the wheat in sheaves. The sheaves are piled in stooks to dry and until the labour and equipment can be concentrated on threshing. Compared to today's wheat, the plant stalks separating the seed heads from the ground are very long.

Scott is 42 miles west of Biggar Saskatchewan on the CNR main line.


By the looks of it, this is a gasoline tractor and its power take-off wheel is being used to transmit energy through that huge flopping belt which leads over to the threshing machine.

Horse-drawn wagons bring in the dried sheaves of wheat. They are forked onto the threshing machine conveyor and, in a series of steps, the machine beats the grain loose ... from the straw and the outer parts of the wheat 'flower'.

The wheat ends up in bags on that light blue wagon, the straw and chaff end up in piles where they will likely be burned.

A modern machine which combined the cutting and threshing steps above into one operation was called a combine.

Around Portage, circa 1990, the straw was often ejected by the combine into tight windrows. Sometimes farmers - following traditional practices - burned the windrows of straw ... and acrid straw smoke filled the air for days. This created an often serious pollution, highway visibility, and public health problem.

While hay contains dried grass and/or dried legume (e.g. clover, alfalfa) stalks, leaves and seed heads - straw is only the yellow cellulose stalk. Although ruminants can digest the cellulose, the straw is much less palatable than good hay. So straw is used mainly for absorbent animal bedding.

'The map shows the areas in which the Mennonites settled in Manitoba, and the location of the farmer-operator villages which are known to have existed in the 19th century.' Steinbach is marked.

A section from JC Hamilton's map of part of western Canada, 1876.

'Books on the prairies written during the settlement era were generally accompanied by maps of indifferent quality. This is a characteristic map, intended to provide the general reader with the information he requires for following the material in the book ... This map has glaring errors, such as the indication of a main CPR line west of Selkirk, which was never built ...'

[Note that this was to be the projected 'Canada' Pacific - the original government railway of the Pacific Scandal - not the CPR which was later built by the Syndicate of Angus, Hill, Stephen et al. Sandford Fleming, the Chief Engineer of the CPR, advocated the northern route through Yellowhead Pass - this was later rejected by the Syndicate ... Another interesting detail: As the original owners of the Pembina Branch, some members of the Syndicate profited handsomely from their temporary monopoly on rail transportation to Winnipeg - the Pembina Line connected with US railroad network.]

Again, you can see Steinbach's location marked - it is to the right of Steinreich and under the 'B' of Manitoba.


In the south-east corner of the map, reference is made to the North West Angle of Lake of the Woods ('NW Angle'). The disputed location of this survey benchmark arose after the original survey undertaken as a result of the Treaty of Ghent (1814) ... and the later fight between the Hudson's Bay Company and the American government ... all to determine where the boundary should lie from Lake Superior to Lake of the Woods. It became a very long story ...

If you like seeing, hearing, collecting and swapping Canadian stereotypes, the movie for you might be the Oscar-winning 49th Parallel - available on iTunes. This 1941 British propaganda film came out just in time for the American entry into World War 2. It shows many NFB-style examples of Canadian scenery and you can feel the CPR's helpful hand in its selection of some vistas. It is written up in Wikipedia if you want to investigate further.

Laurence Olivier is Johnnie the French-Canadian trapper (with an accent) and both Canadian Masseys can be seen/heard in it.

In the screencap above, fugitive 'ethnic Germans' from a sunk U-boat have presented themselves as a gang of itinerant farm workers at an 'ethnic German' Hutterite colony in Manitoba. The colony has given them work and shelter - at least until all this Nazi business started. According to Wikipedia, filming took place in a real Hutterite colony.

Read the body language of the audience (above) after the self-revelatory call to action by the Nazi group's leader. At great length, the differences between the Nazis and German society of the late 1930s ... and the steadfastly pacifist Hutterites ... are compared and contrasted in the script.

After a long day for the driver and an interesting day for us, the Trans-Canada and the CNR lead back to Portage.

The extra 5382 west rumbles by the Portage CN station.
A load of empty coal hoppers is in tow. 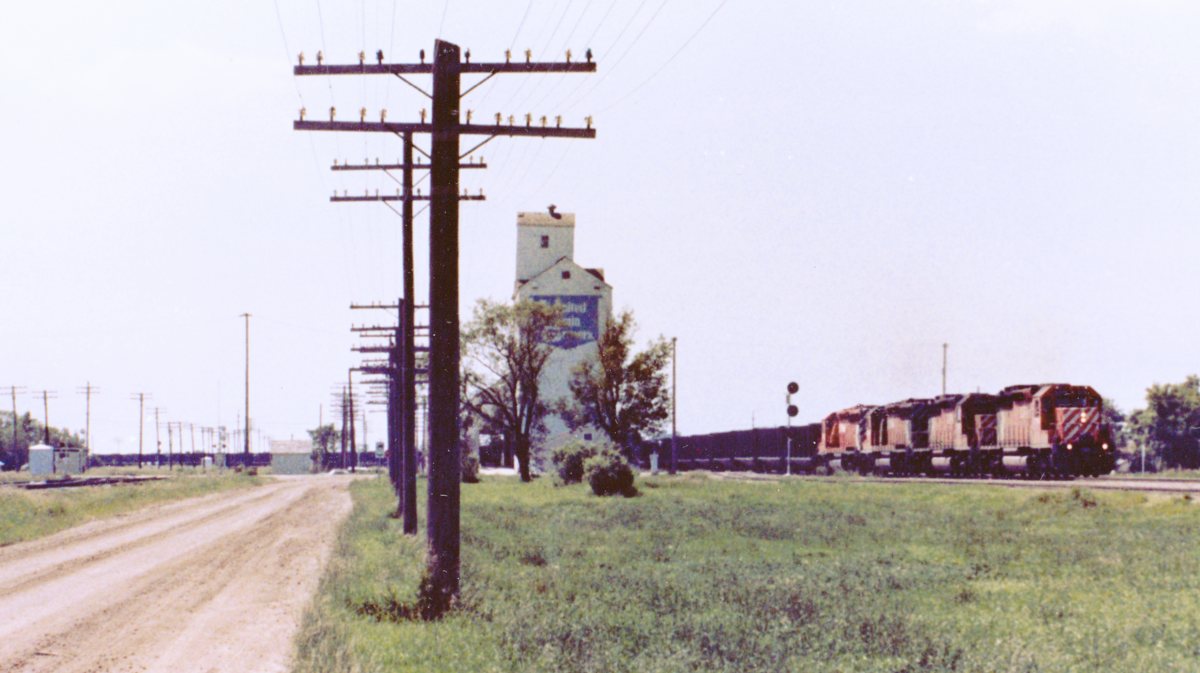 With the camera facing west at CNR Kearns (which is to the left), a CP main line eastbound coal train crosses the CP/CN diamond at the horizon.

... heading for the Gladstone Sub.