During an evening tour of the local facilities,
my uncle stands beside the standard grain car of the late 1900s in Canada.
Location 1 the on map looking south-east.

Earlier, it had been 'custom loaded' on this CP track at the west end of Portage. 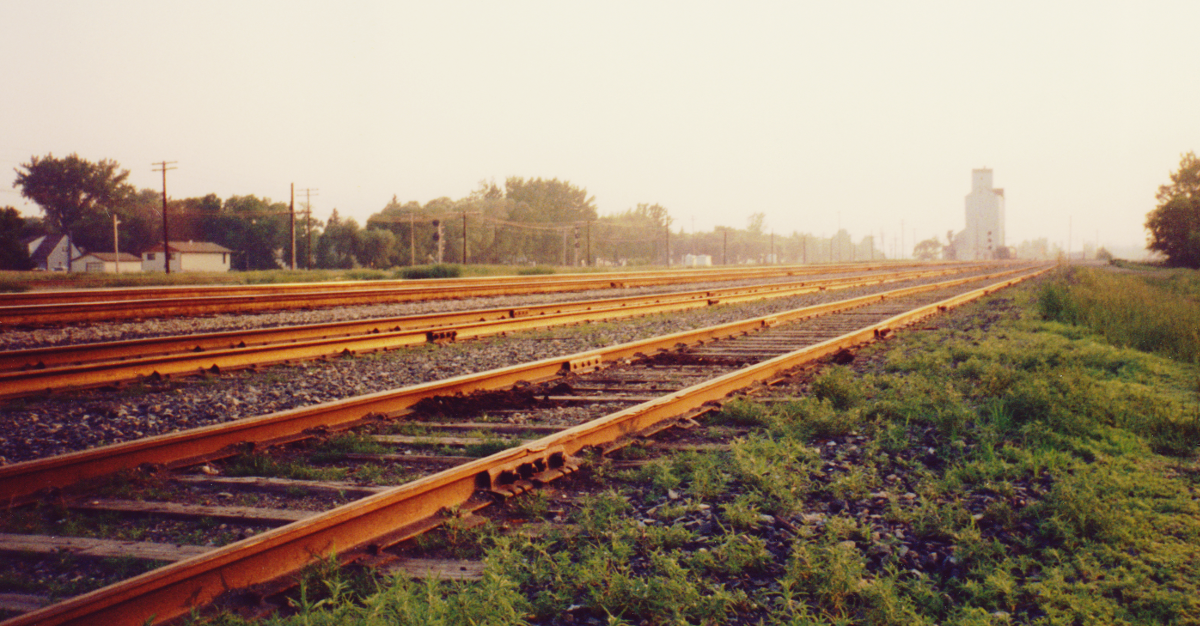 After turning the camera, here is the CP yard in the west end of Portage at sunset.
Notice the 'old style' fish plate (rail connector) with four spike holes.
You can see the 'high steel' of the CP main line .. and far beyond are the signals at CN Kearns.
Location 1 on map - looking south-west.

The Can-Oat plant at the west end of Portage. 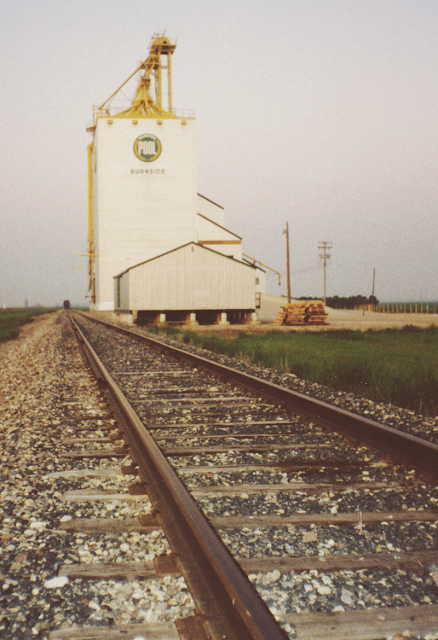 As on other trips, the evening CP westbound intermodal rolls by. 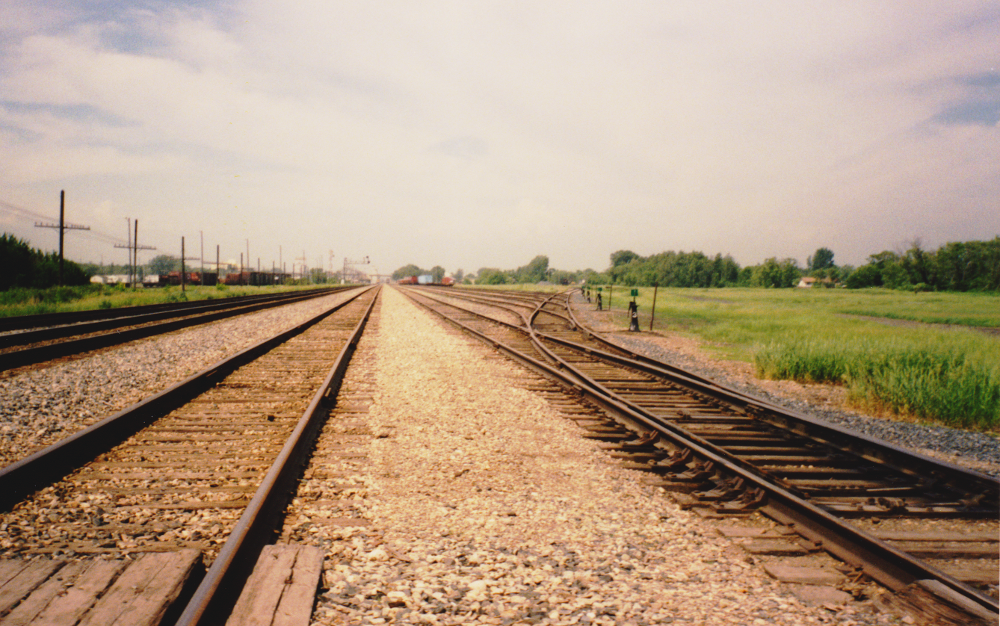 In the mid-morning light, here is the east end of CP's east yard at Portage.
Location 2 on the map - looking west.

You are seeing the same CP intermediate signal gantry again, but from near the CN main line.
A summer tie renewal program is in progress.
The ties fresh from the plant (right bulkhead flat) fit in more nicely
than the ties pulled from the road (left bulkhead flat).
Location 3 on map - looking north-east. 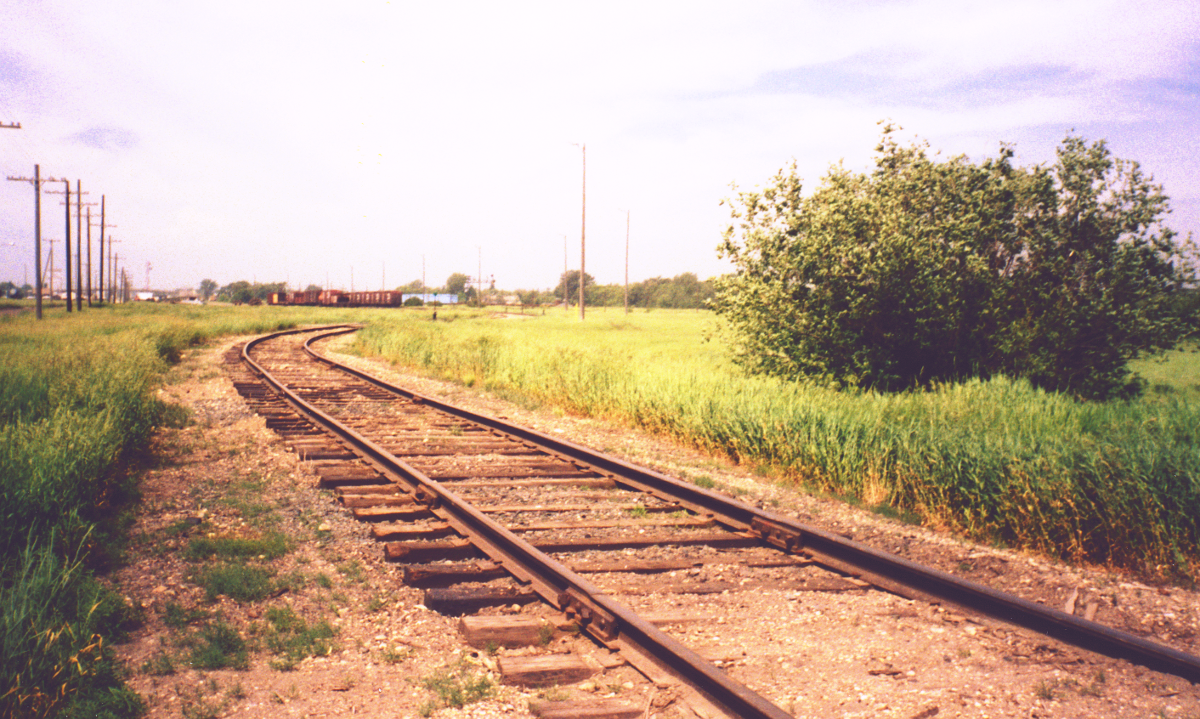 In Search of the Great Northern

At one point, I heard an CN engineer say that he put a car 'in the old Great Northern'.

This yard seems to have been missed by the major upgrades and standardization of equipment made to the Canadian National Railways which were undertaken after Henry Thornton took over in the 1920s. It has the CN bolt pattern. Could this yard be part of the former Great Northern or Canadian Northern yard?

Location 4 on the map - looking west. 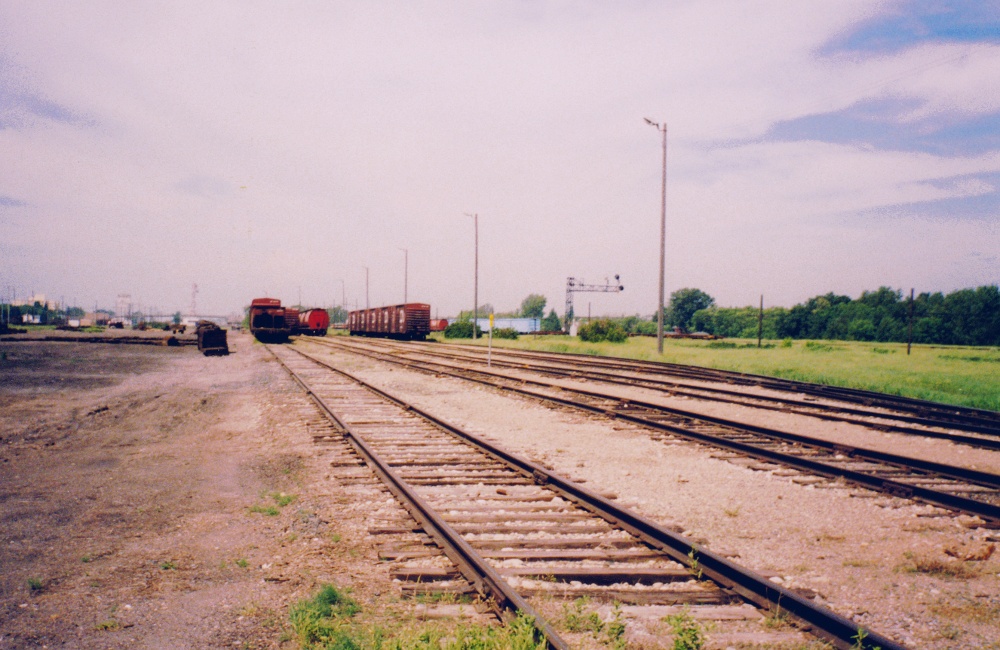 Here is another view of the track of this yard.

Location 5 on the map - looking west.


There were fewer Portage trains photographed during this visit because, as we travelled during our short vacation period together, we documented elements of the National Transcontinental Railway, the former Canadian Northern Railway Port Arthur station, and Port McNicoll and the former site of the Hog Bay trestle.

At 'The Manitoba Museum' 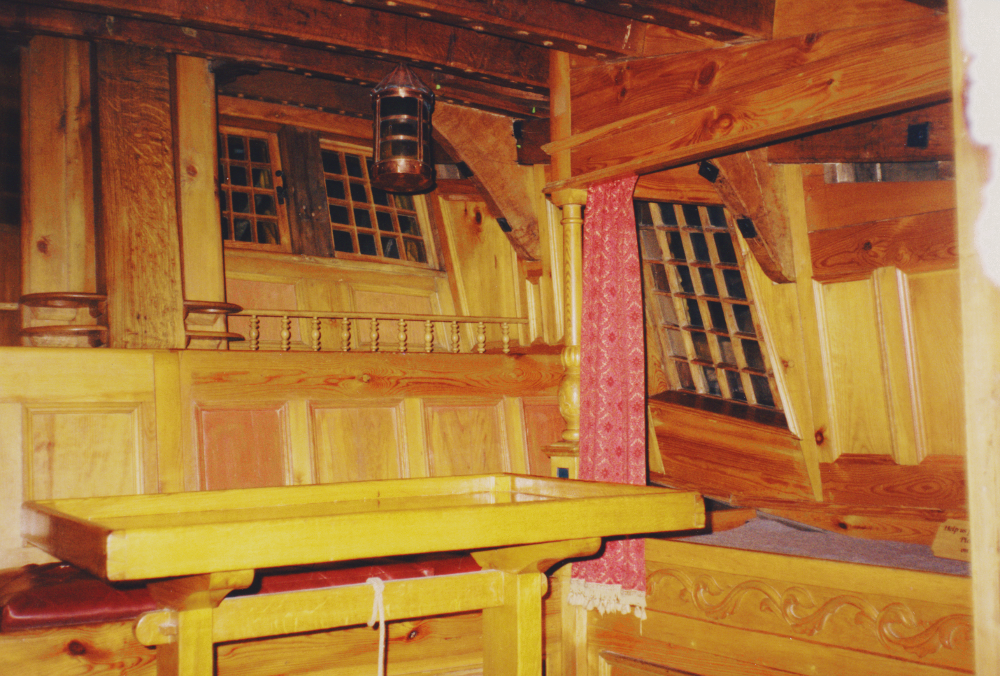 The master's quarters of the Nonsuch.
This is a replica of a famous ship in Hudson's Bay Company history.
It is inside the Manitoba Museum.


Our class was taught this by teacher Hope Maclagan during Grade Five at Lachine. Working solely from my memory ...

Médard Chouart Sieur de Groseilliers and Pierre-Esprit Radisson were adventurers and fur-traders who had illegally traded and explored in New France's 'west end', particularly in the region of Lake Superior.

Governor of New France, the Marquis d'Argenson, had snubbed them and their tales of the riches to be found in the interior ... and their recounting of the even better stories told by indigenous people ... of the wealth of furs available in the 'Bay of the North'. This was around 1660.

.. For the record, it was Radisson who said of their solitary authority deep in the bush:
We were Caesars, being nobody to contradict us ..


Thus rebuffed, they peddled their story in New England and were duly encouraged to repeat it in merrie, plague-stricken Olde England.

King Charles II gave them a hearing, and his cousin, a 'systems and ideas guy' by the name of Prince Rupert, Duke of Cumberland, Count Palatine of the Rhine and Duke of Bavaria, was particularly interested.

On June 3 1668, two English ships and crews - the Eaglet with Radisson aboard, and the Nonsuch with Groseilliers aboard - left for that bay. Damaged by a storm shortly after the voyage began, the larger Eaglet turned back.

Having reached their destination, Groseilliers and the Nonsuch gang set up shelter and security arrangements, and negotiated a trading relationship with the indigenous people who had gathered there to see the circus. With lemon juice and Sir G's Spruce Beer, they managed to avoid most of the ill-effects of scurvy over the winter. They returned to England in October 1669.

Their bartered goods had cost £650 - the furs received in trade sold for £1379 at the London fur market.

King Charles II granted a Royal Charter in 1670 to the 'Governor and Company of Adventurers of England Tradeing into Hudson's Bay'. The area covered by the charter was 1.5 million square miles and was to be known as 'Rupert's Land'.

Three hundred years later, the Hudson's Bay Company had a replica of the Nonsuch built using the same old techniques and types of tools.

They put the Nonsuch onto the deck of a modern freighter to bring it across the Atlantic Ocean to Canada, where it sailed around - including a tour of the Great Lakes. 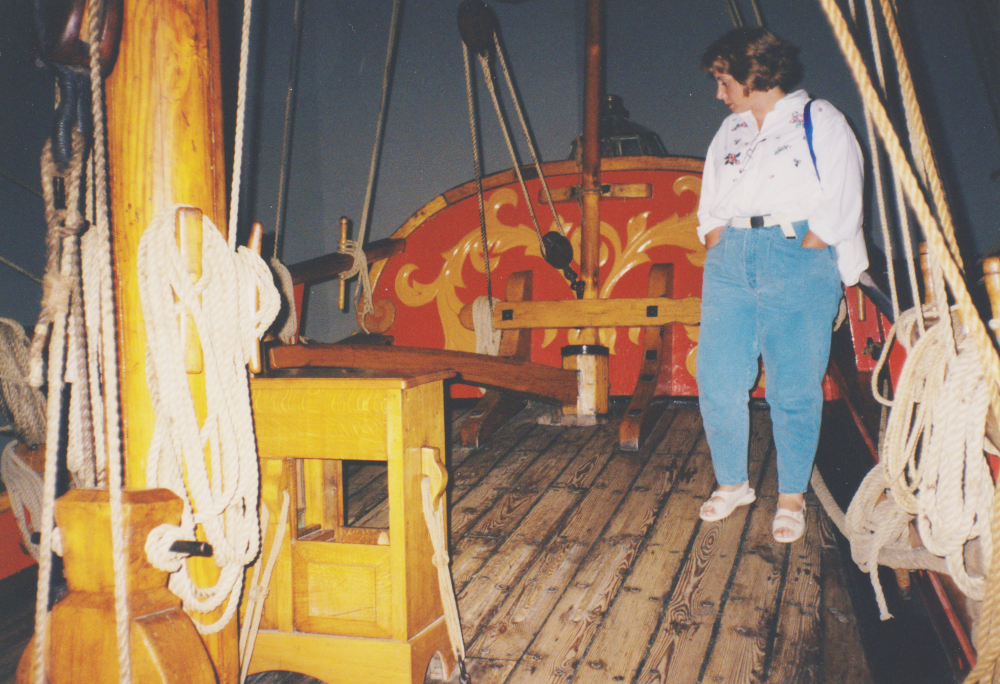 The Nonsuch was steered with a tiller - not a wheel. Here, it is pushed 'full right'. 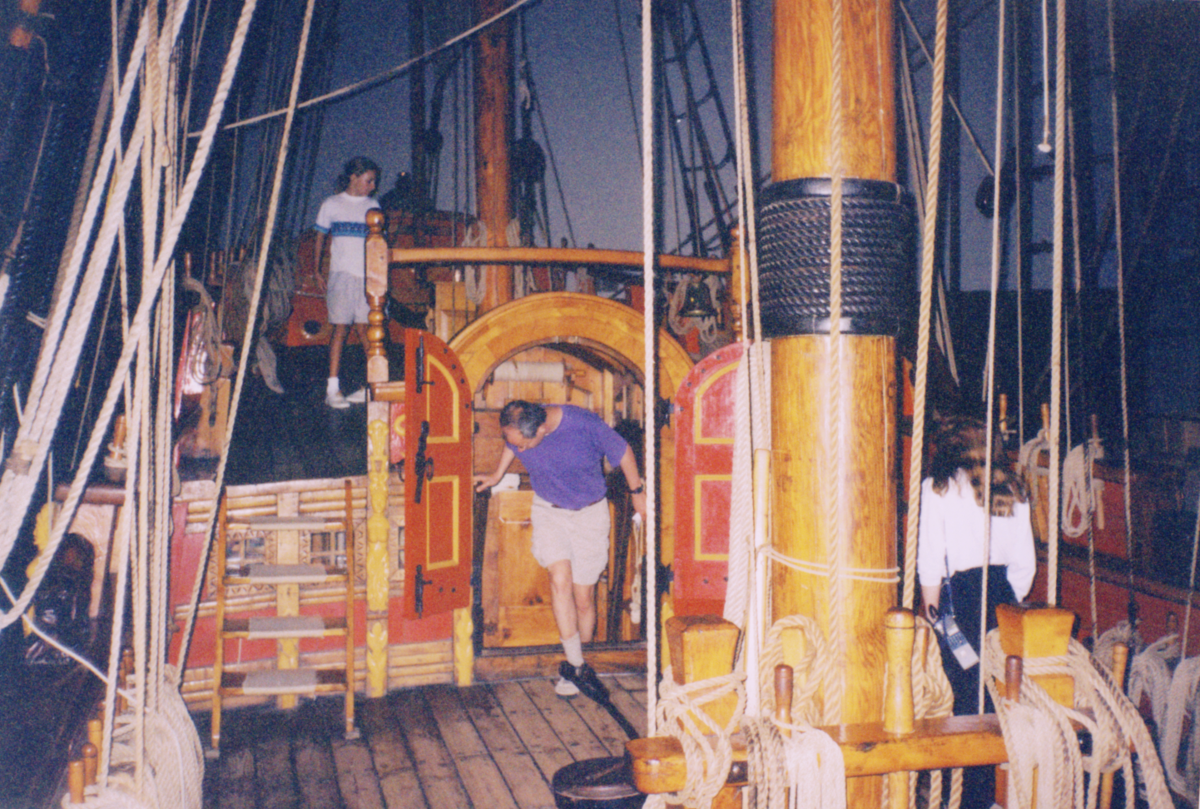 Every year, people come from all over the world to bump their head on that door frame.

This enables other visitors to photograph the ship's speedometer above the bumped head ...
it is that line of string on a wooden spool.

With a wooden drogue attached to the loose end the line ...
and the drogue dropped behind the moving ship  ...
and knots tied about every 50 feet  ...

The number of knots played out in 30 seconds
(timed using a sand glass)
gave the ship's speed in nautical miles per hour. Tiller to the right: rudder to the left. 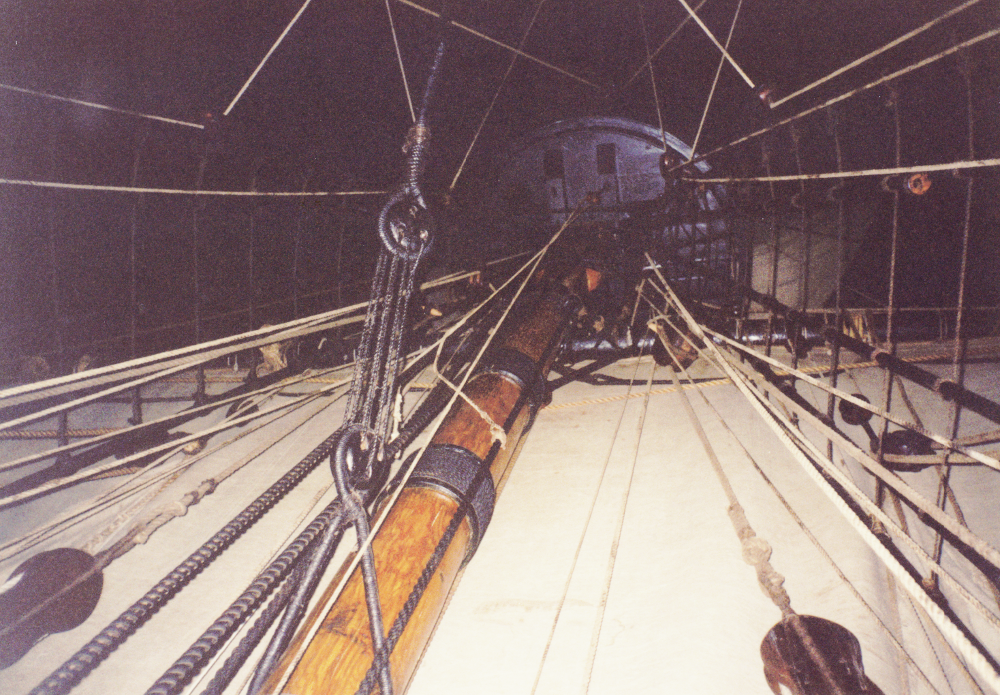 As you can see from these photos - using people for scale - this was a small ship to sail on the North Atlantic.

It visited Kingston, Ontario in 1970 (actual date not recorded). 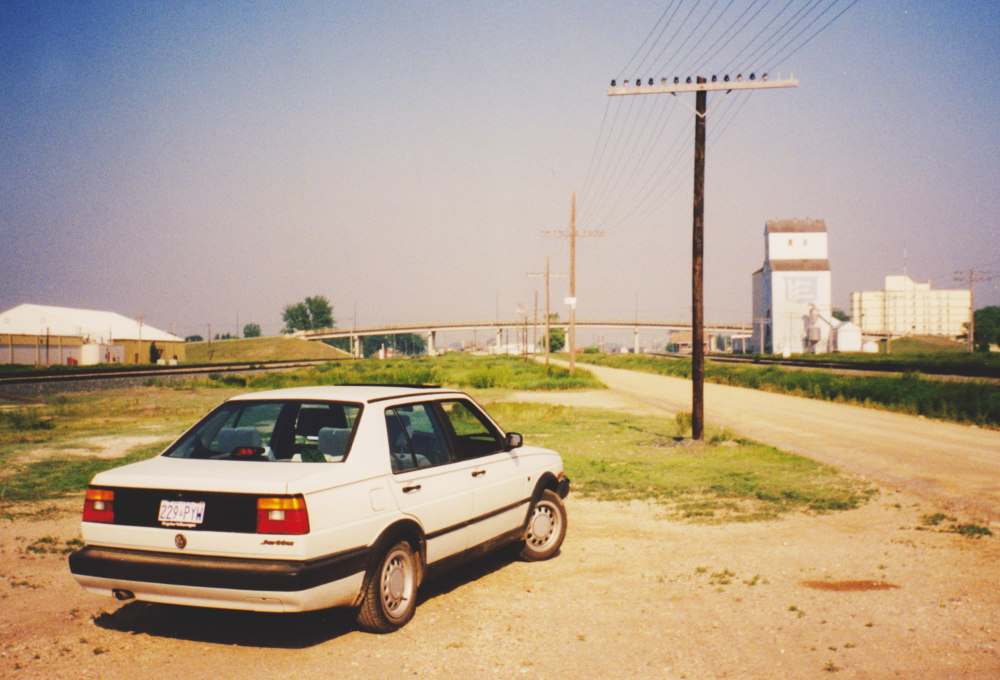 At CN Kearns, looking east along the CP (left) and CN (right).
Smelling the warm creosote of summer, this was a great place to relax. During the evening shown at the top, the 5171 led an eastbound by the same location.