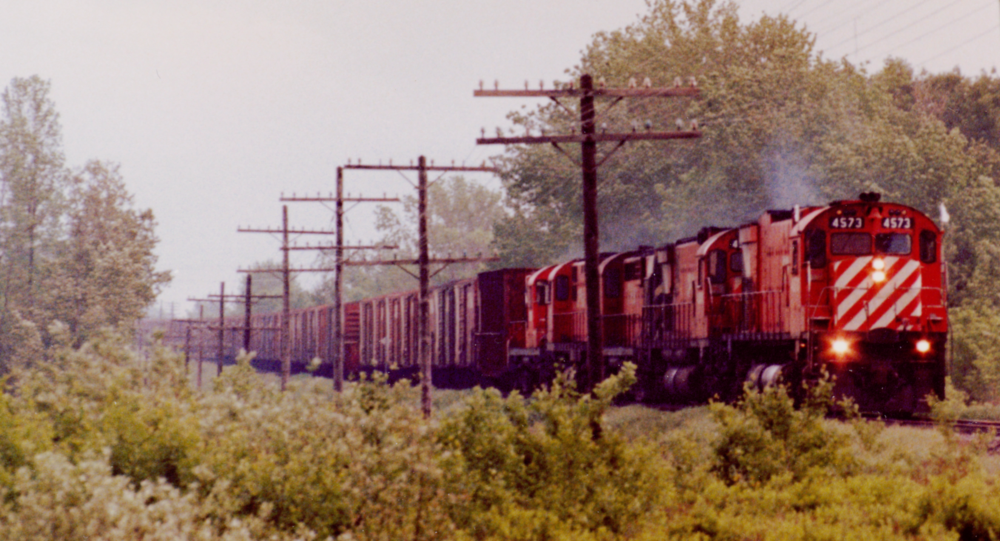 In the spring of 1987 there was lots to see on the rails.
A train of 40-foot boxcars has changed crews at Smiths Falls and is westbound on the Chalk River Sub. 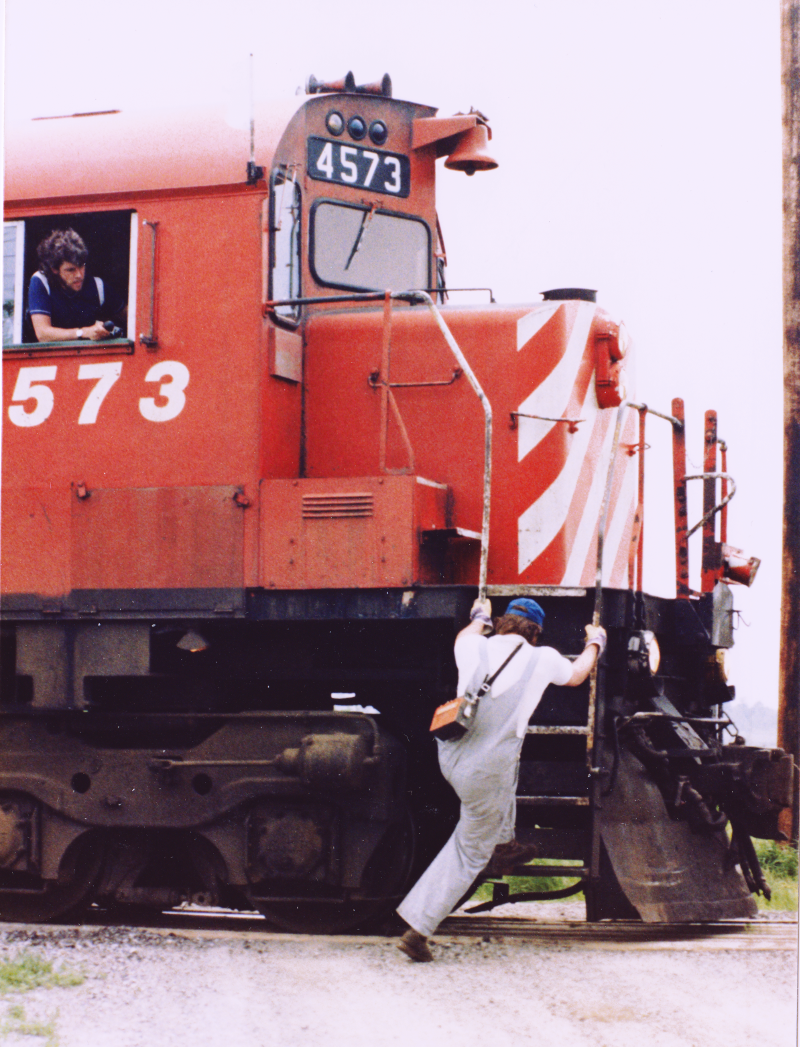 At the same location just north of Smiths Falls on the Chalk River Sub, the headend trainman is driven to the crossing and boards. 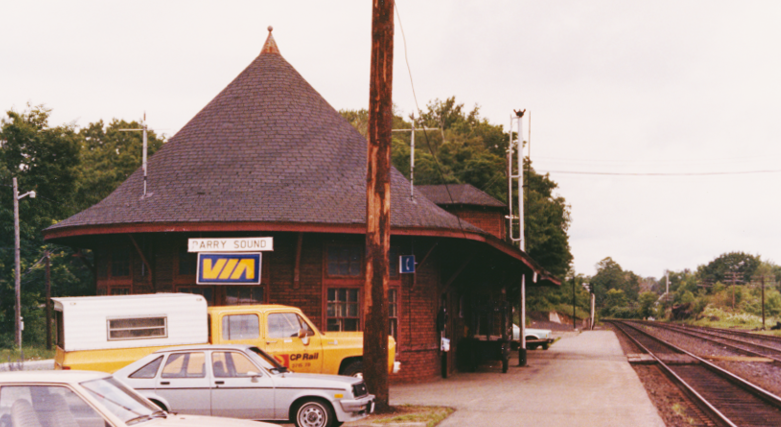 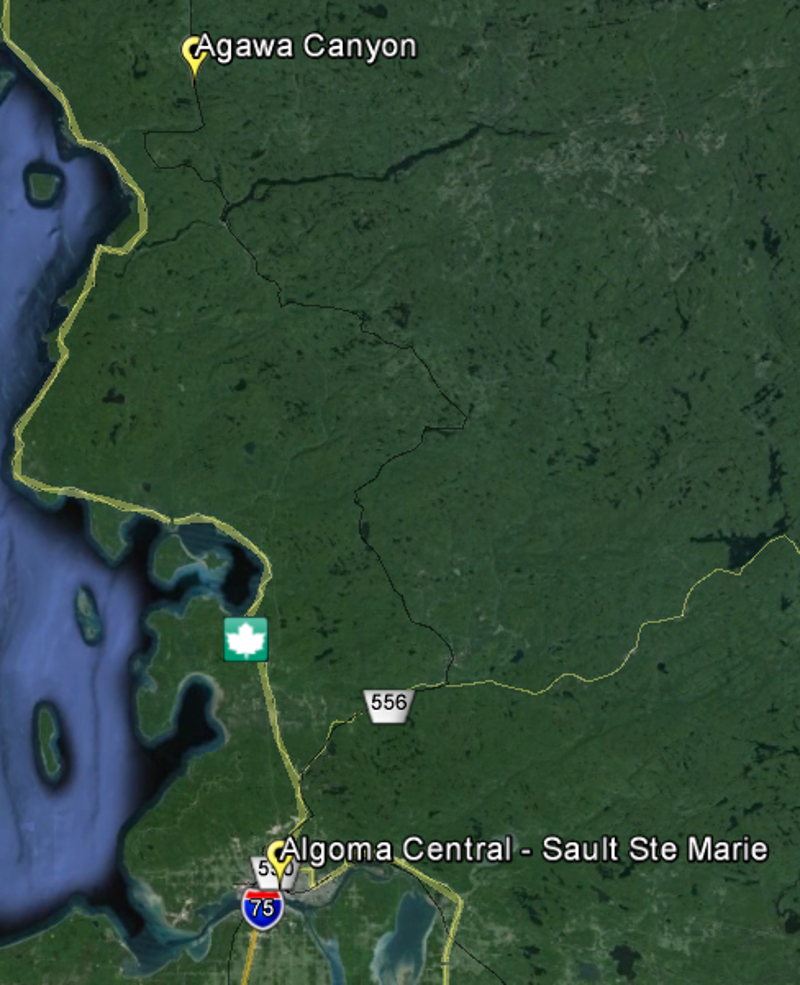 East of Lake Superior, GoogleEarth shows the route of the ACR. 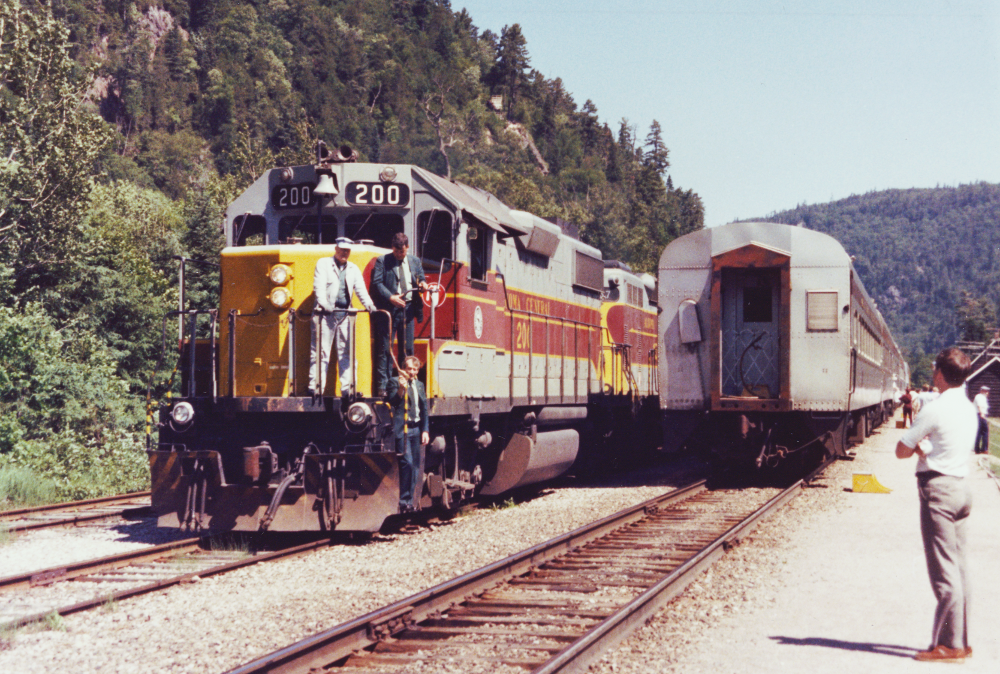 .. and a GP38-2 - both by GMD.
Here the power is running around the train at Agawa Canyon and the movement is being controlled from other unit.

Every year we passed, I took this photo of White River yard, looking 'west'.
Budd car 90 is just visible - one of two retained by CP. 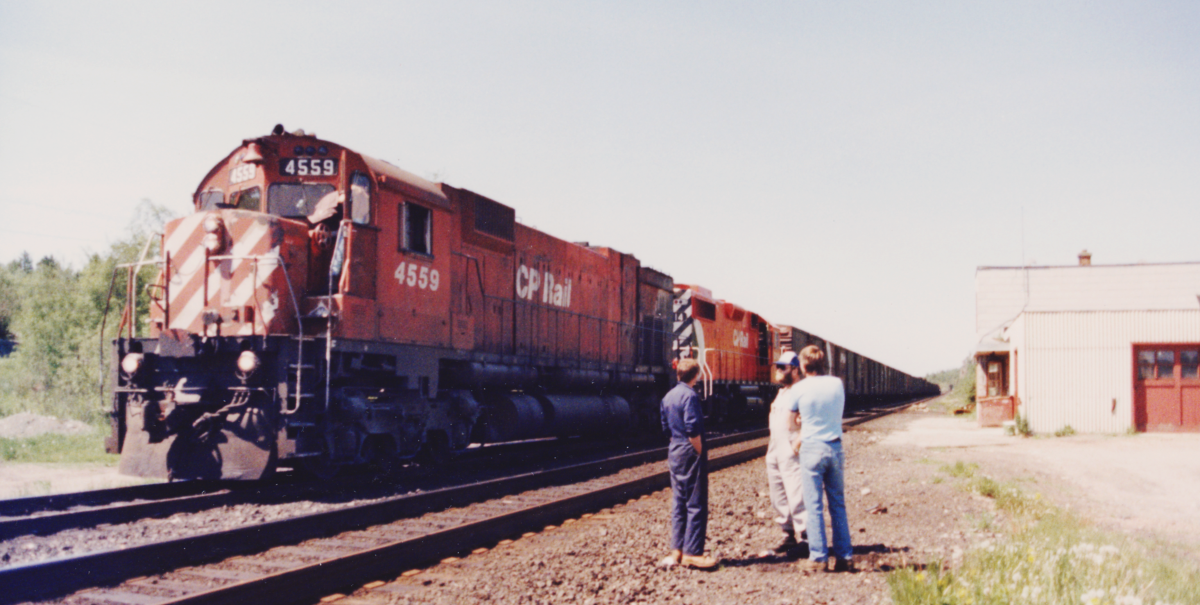 At Heron Bay, this eastbound freight was being held on the grade so another could take a run at the hill, I think.
I believe the guy with the cap is a crew member.

Either for genuine recreation - or to 'fun' the westbound's crew about the delay -
the crew member vanishing into the trainman's door had been set up to sunbathe on the nose ...
until some enthusiastic stranger showed up with a camera to capture the scene. 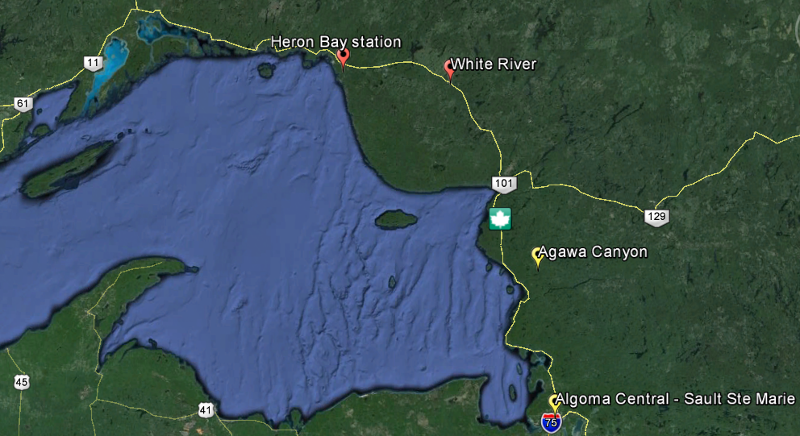 We generally stopped in Schreiber and Thunder Bay, but those photos will be grouped in a separate section in the future.
Above, the extra 5925 east approaches Stephens Avenue at Portage. 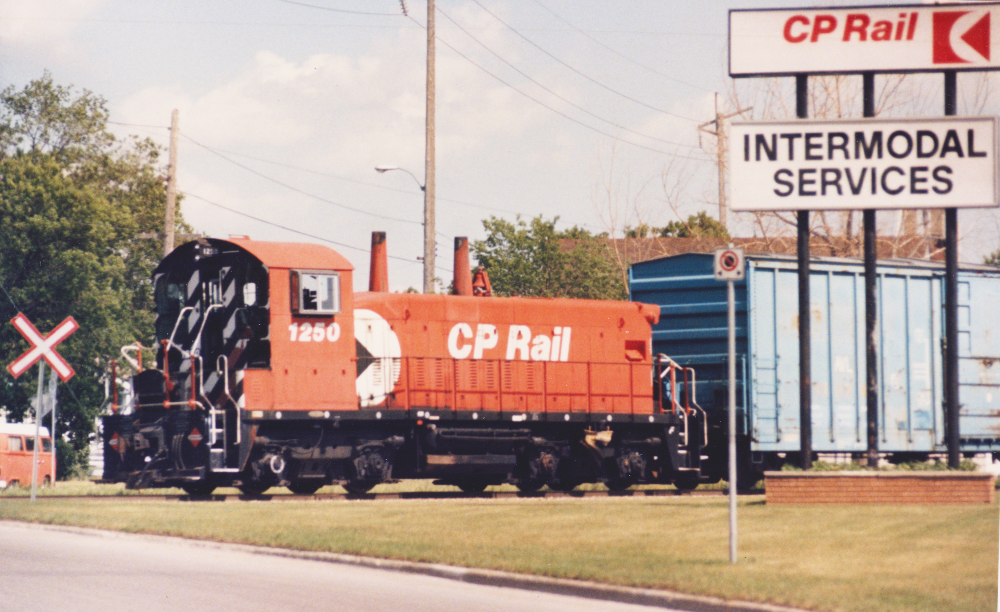 With my uncle at the wheel, I took a typical 'hope shot' over the guardrail and between the strobing girders of the Arlington Street overpass looking toward the Salter Street overpass to the east. At least with modern software there is now a hope of salvaging something from these long shots of 30 years ago.

Near the pigeon in flight and the radio aerial, I believe there is a slight peak in the track near those two shacks. This might have been used in the past to assist in gravity switching - or early humping with riders, if you prefer. Just to the right of that would have been the old steam locomotive 'ready track' and then the roundhouse.


I think this muddy, smokey, unused postcard was photographed from the same overpass, but a little further along - i.e. farther north. It is undated, but may be from the early 1950s (based on motive power). I think one of the 'mini-humps' may be under the two boxcars and gondola beside the diesel switcher.

There may also be some 'gravity assistance' set up for the cars spotted at the coaling dock at the right.

Next, at CN's Symington, 7522 and 7509 bracket two yard slugs under Fermor Avenue.
In this locomotive class, even-numbered are 'leaders'.

They continue up the hump (entirely in shadow) with BCOL bulkhead flat cars.
Switch ground-throws and switch heaters - and possibly newly-installed (bagged) signals are in the foreground.

The other hump set is working too. 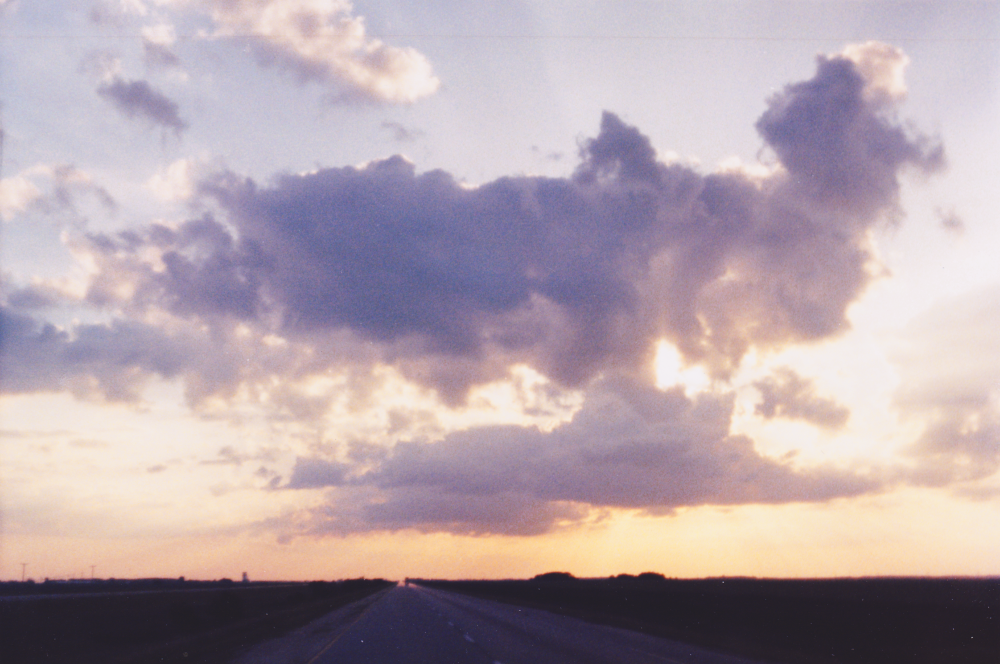 Miles away on the left, a grain elevator marks the next town and the CNR line.
While this trip was routine for our hosts, it often provided spectacularly novel views like this for us.

Near the west end of Portage, the local switch engine 6719 is probably going to Campbell Soup as solo 5960 pulls grain empties west. 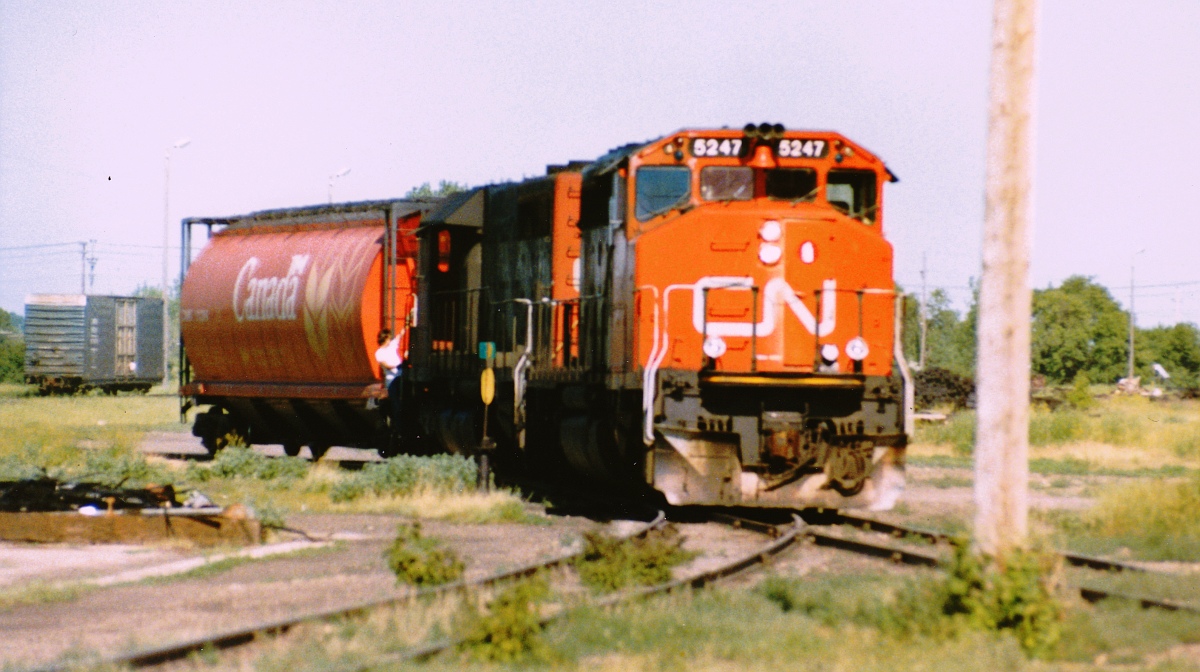 I'm guessing the hi-cube boxcar just set off is full of low-density canning materials for soup.
The 5247 daintily makes its way back to the main, 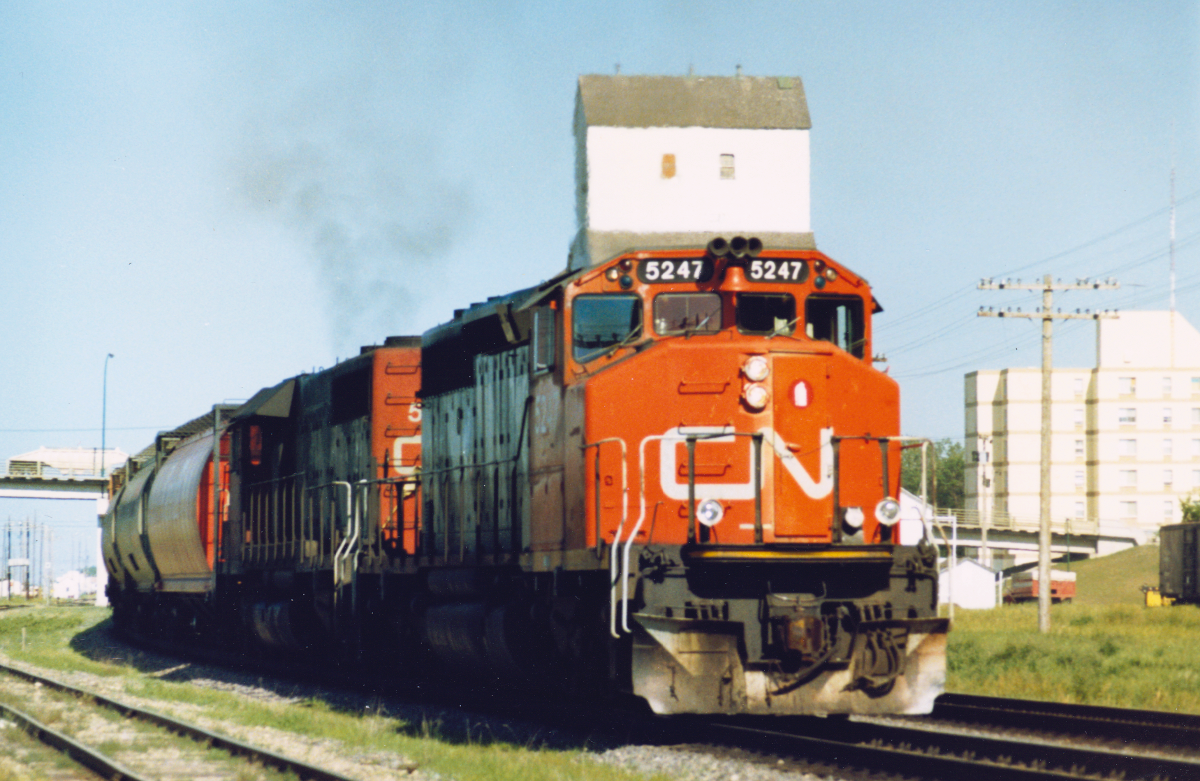 .. and pulls its train west under the Tupper Street overpass.
Notice the boxcar at the right margin on some now-long-since-removed track which was originally put there for a good reason.

The extra 6016 west rolls through.

In the next section we'll be on the train to Churchill ...

After the original posting, and through Jim Christie's research, you can see these two diagrams illustrating the layout of the 'new' CPR Winnipeg yard from the Railroad Gazette in 1904.

As the article below indicates, the new freight yard arrangement features two, combination receiving and classification yards - east and west. Each yard will classify both branch and main line traffic.

These two yards are connected by two hump tracks - one descending eastward and one descending westward. This enables newly received cars to be separated and weighed by gravity without rehandling.

To elaborate on yard operation ...

All eastbound trains will arrive in the west receiving yard.
Each car will be weighed as it passes over the hump.
The car will be classified into the main or branch line tracks in the eastern half of the yard.

... And vice versa for westbounds.

Here is the link for the article itself.
(The text columns are broken by horizontal diagrams,  but each column is still read from the top to the bottom of the page)

The yard, as it is described in 1904, does not seem to match exactly with the well-used postcards below. So they may illustrate an earlier arrangement. However in both you can clearly see the two main lines.

Speculation: A relatively clean (almost switch free) non-main line track running parallel to the mains suggests that the photos are taken in opposite directions.

The subway illustrated in the article, which takes Main Street under the east yard throat and passenger tracks, matches with this other postcard, below. With the location described, it is clear that the building to the right is the (now demolished) Royal Alexandra Hotel, the CPR hotel built alongside the CPR's large and still existing (in 2015) former Winnipeg station. The camera looks north with the hotel and station to its east.

While I'll never be an expert on the Winnipeg yard or its history, it is rewarding to gradually fit a few more pieces of information into place.

Thanks again to Jim Christie for sharing his research.