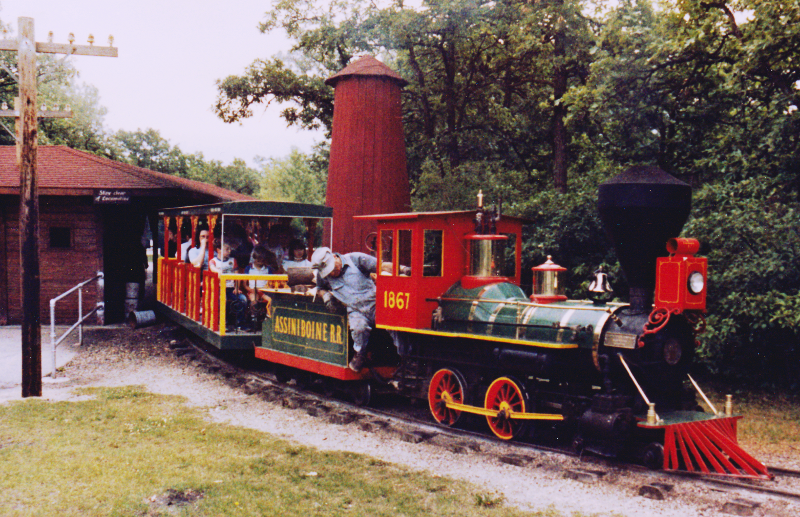 In Assiniboine Park in Winnipeg, we enjoyed a particularly authentic ride.
The locomotive was powered by real coal. 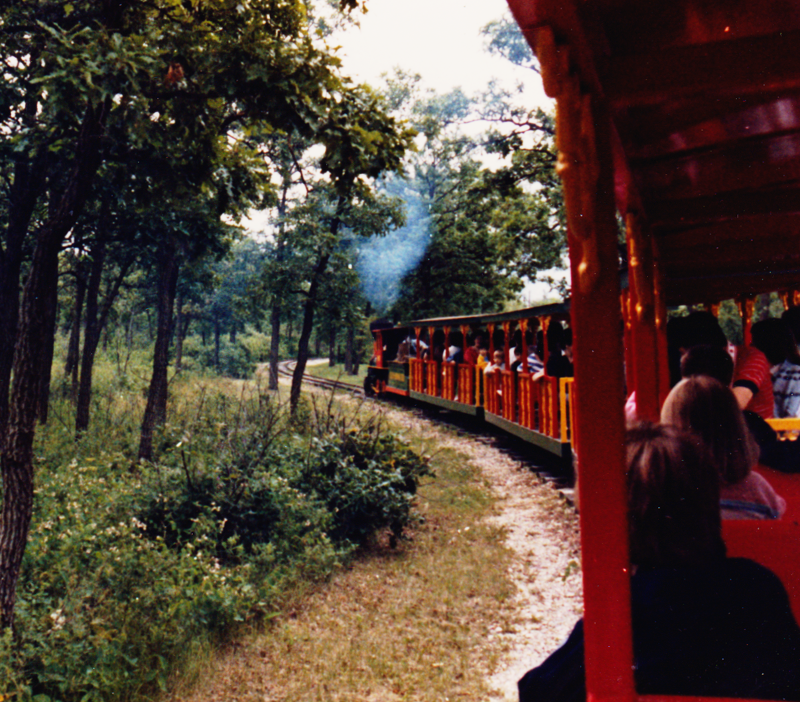 Unless we visited during a time of year when it wasn't running, it would be a safe bet that we rode on the Prairie Dog Central train every single time we visited my aunt and uncle in Portage. Until preparing this post, I had never really understood the local features of former Canadian Northern line at the PDC's southern terminal.

This shot was intended to depict a working (i.e. coal and grease stained) locomotive ready to be off. Except for the wooden pilot beam the man is touching, virtually every metal surface would be radiating heat.

Above the man's hand, at the horizon, is probably one of the elements which caused the eventual move of the PDC from its downtown location - a steel railway bridge ...


Above (upper blue marker) is the former location of the St James CN station from which the loaded trains ran to the north. A little to the south, where the Oak Point Sub connected to the Rivers Sub, there was a handy wye for turning the engine and/or the train. Between those two points was a bridge over the Assiniboine River. It was likely the Canadian Northern's original bridge.

The central pier, being circular and having no water cutter, suggests that the central spans of the bridge might once have swung for water traffic on the Assiniboine.

Since its building in Glasgow, and its original use on the CPR near today's Kenora, this locomotive has been rebuilt so many times that it is a poor historical 'artifact'. That is to say that very little of the original century-old metal has survived through the use of replacement parts of second-hand or custom-forged origin. Who knows how many times the flues have been replaced?

Upgrades such as superheaters may have changed the hardware configuration within the boiler and increased the engine's efficiency a little. The dynamo and air pump have added sounds which the 'original' didn't make. Sulphurous coal smoke has replaced the the aroma of locally sourced wood  - probably the fuel of necessity during the first few years. The smells of hot tallow, and burning whale oil and coal oil are gone.

The perfect, balanced - as it has been called with diesel-age hindsight - wheel arrangement of the 4-4-0 remains. The distinctive Stephenson valve gear still shuttles back and forth. Someone must still load all the fuel to be consumed onto the grates by hand.

The wooden coaches with their 'watch the ties pass' quick-limed, dry toilets (in 1985) harken back to interminable, slow-speed rail journeys through the Canadian bush and over the prairies.

The lightness of the coaches and the modest tractive effort used to pull them cause one to wonder how trains could be run through the lightest of snowfalls, or how enough tonnage could ever be moved to supply even the most modest of pioneer villages and farms along the way.


When you reflect on the technological simplicity, scale, and speed of this train - the historical artifact is perfect.

Above, my uncle appears at the left margin with his camera. To re-enact history, he has opened the throttles of steam traction engines - the off-rail source of any big power needed on the prairies during the first few decades which followed the building of the CPR.

Behind the south-facing PDC train is a CN diesel - a switcher I am guessing. I don't know enough about PDC operations to say whether it is here to remove the consist - or just waiting for the train to clear to the south.

During our visit in 1985, the Prairie Dog was running from St James to Grosse Isle. 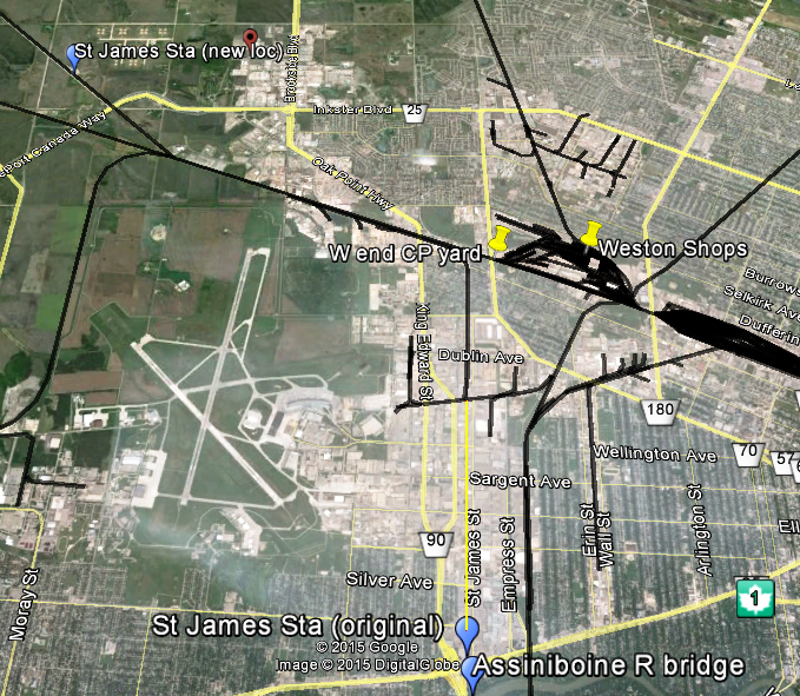 From St James, the train would operate north along my added yellow line. Sounds of grade crossing whistling, locomotive bell, and exhausts reflecting off buildings were reminiscent of main line steam locomotives hauling CRHA and CNR excursion trains through towns along Quebec's secondary lines in the 1960s.

Exiting the industrial park, the former Canadian Northern line would parallel the CPR main line for a while, then the wheels would hammer across the diamond (crossing the CP Carberry Sub) which carries the Oak Point Sub north to Grosse Isle.

At Grosse Isle, the time-honoured practice of leaning to peer down the track is seen. The locomotive and first car have be turned on the wye for the return to St James. A rail-mounted mower is probably used to make the trip around the wye less of an adventure. 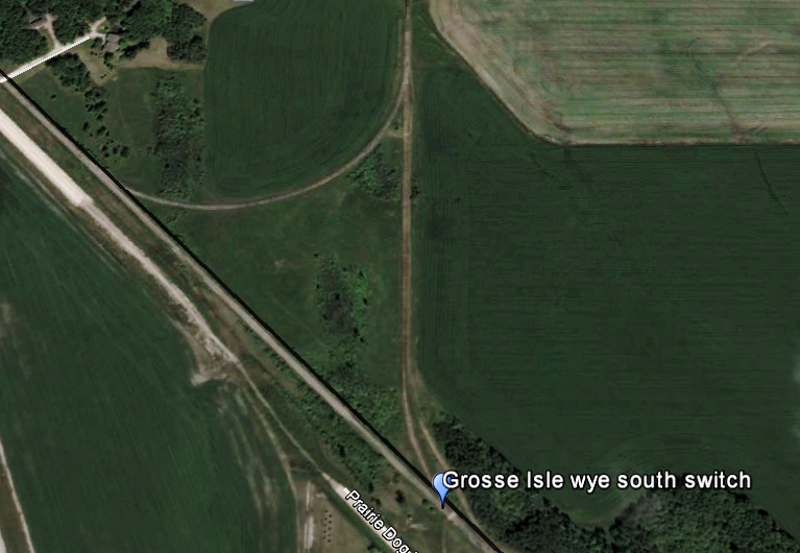 I remember the Grosse Isle wye move (during a subsequent visit) as being deep in soft grass with a great deal of flange squealing.


With the benefit of GoogleEarth, we can see that the (former) wye is not equilateral and that it seems to employ the greatest curvature possible. The Oak Point Sub continued to Gypsumville via the north-west leg of the wye. Heading due north at the wye was the Inwood Sub to Fisher Branch and Hodgson.


"Trains, except work trains under direction of roadmasters and caboose hops, must not be operated on the Inwood Subdivision when temperature exceeds 27 degrees Celsius, 80 degrees Fahrenheit unless authorized by chief train dispatcher .." [thermometers are provided, etc.]

During a particular bout of my 'railway archaeology' one afternoon, we dragged my uncle in search of ancient lines and found some very light rail on bare ties. Photos of this and other Prairie Dog trips will follow in additional posts. 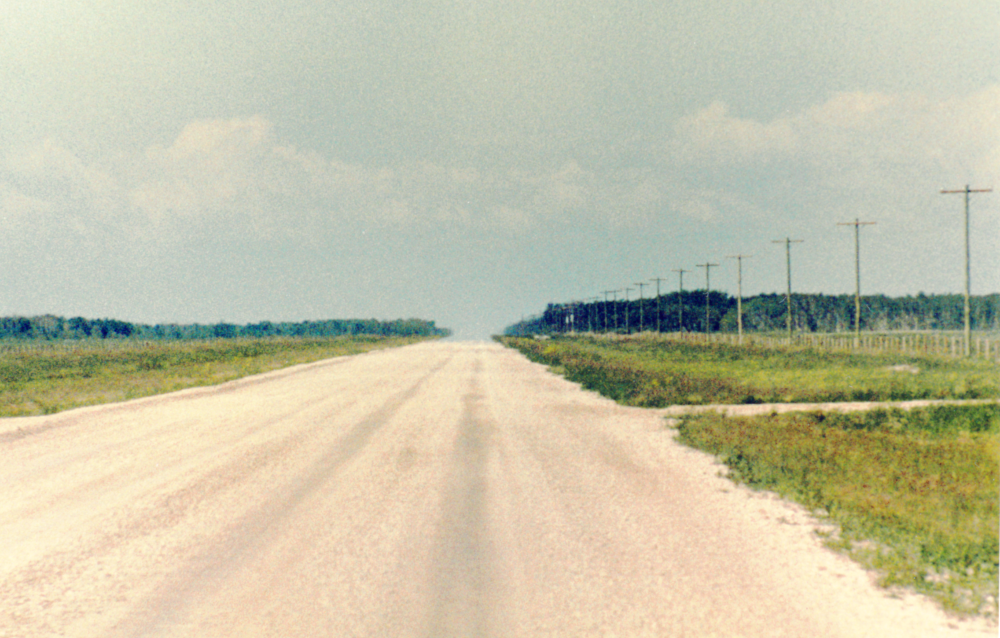 Somewhere near Delta on Lake Manitoba you can see a fairly typical backroad view for this part of Manitoba.

On a summer afternoon, a clear blue sky would sometimes be broken only by clouds towering over Lake Manitoba. On this spectacularly flat area of the prairies, items on the horizon are visible long before you finally reach them.

In the east end of the CN yard a Browning crane from 1957 and its idler car are seen.

Notice the step at the left side of the switch stand.

Near East Tower, the camera is looking west along the CNR main tracks.
The CN station view is blocked by cars, but it is short of the Tupper Street overpass and to the left.
The track to the right holds anhydrous ammonia tank cars for Bloom.
The roof of the CP station can be seen to the right of the brown hopper cars to the right.

I had thought that back when I was young, that all main track rails were properly lined and surfaced.
I guess I was wrong.

The main lines of  the CPR (Carberry Sub) and the CNR (Rivers Sub) cross at Portage.

Because of my vacation proclivity for taking every photo possible with grainy film into the sun, bringing some of the equipment out of the shadow has required some unnatural stretching of colours.

To the right, it is perhaps the Portage operator who is preparing to hoop up a clearance and orders to the extra 1006 west and its consist of grain empties. 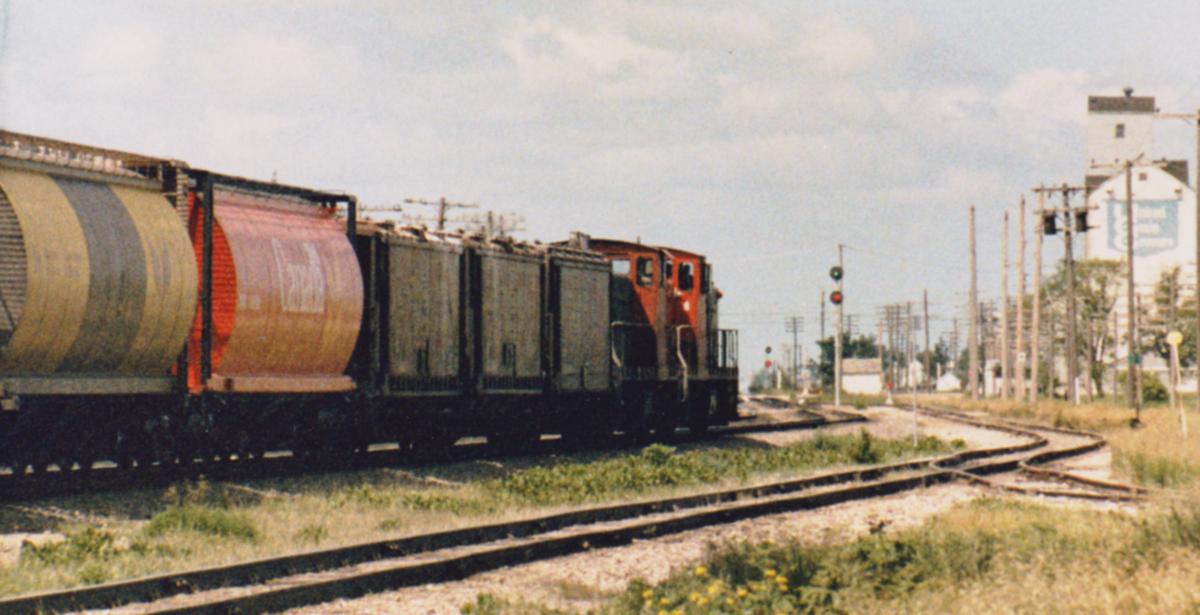 The extra 1006 west approaches its signals for the Gladstone Sub. 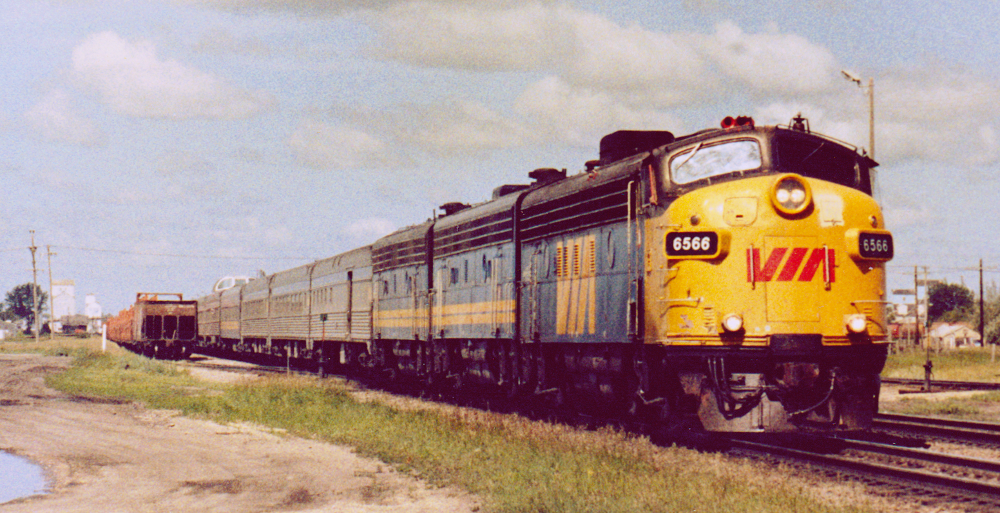 With the CN station visible to the left of the maintenance of way cars,
VIA No 2, The Canadian, approaches East Tower with red CP Rail paint
indicating the lead unit's heritage under the peeling VIA black. 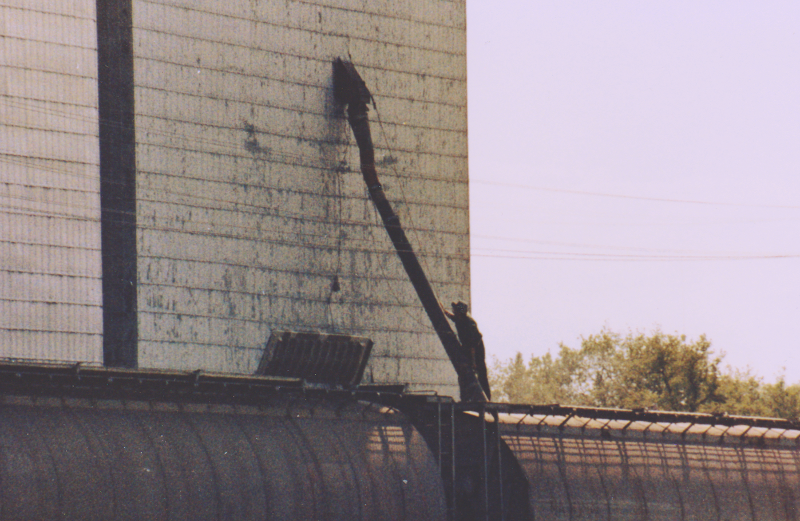 Hot, dusty, itchy work late on a Portage afternoon.
An elevator worker fills a covered hopper from the UGG elevator. 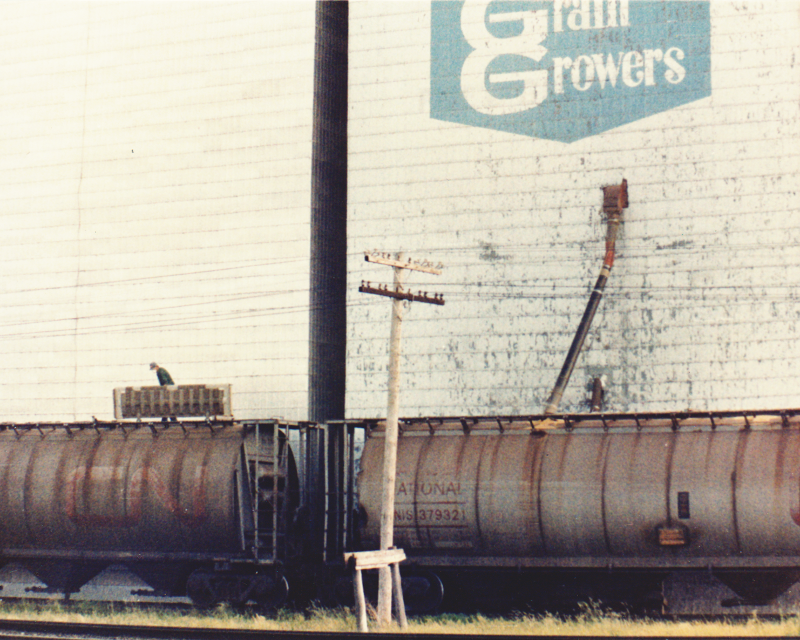 If you watch a similar operation and hear a cover slam, it is not carelessness.
The covers are lifted to the top of their arc, then released to fall open or closed.
To carefully and silently lower them would risk over-balancing and a possible fall from the top of the car.

The extra 5010 west arrives in Portage - its consist is seen curling around the curve to the south-west.

Probably photographing from the old piggy-back ramp,
my zoom finds the CP switcher conductor checking for handbrakes etc before switching. 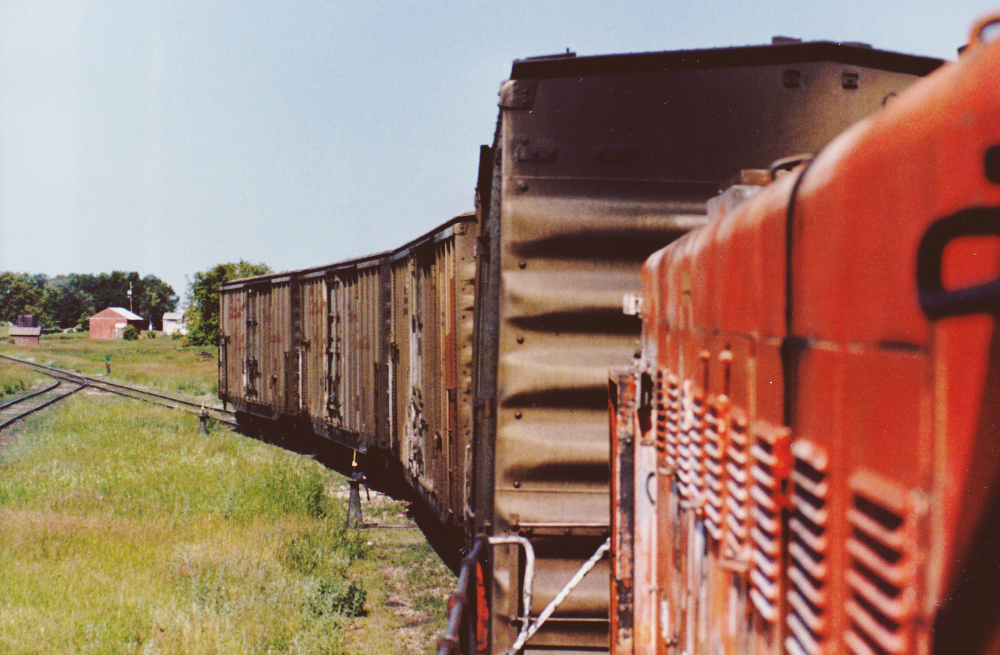 The 6569 is taking these four mechanical refrigerator cars to the McCain plant. 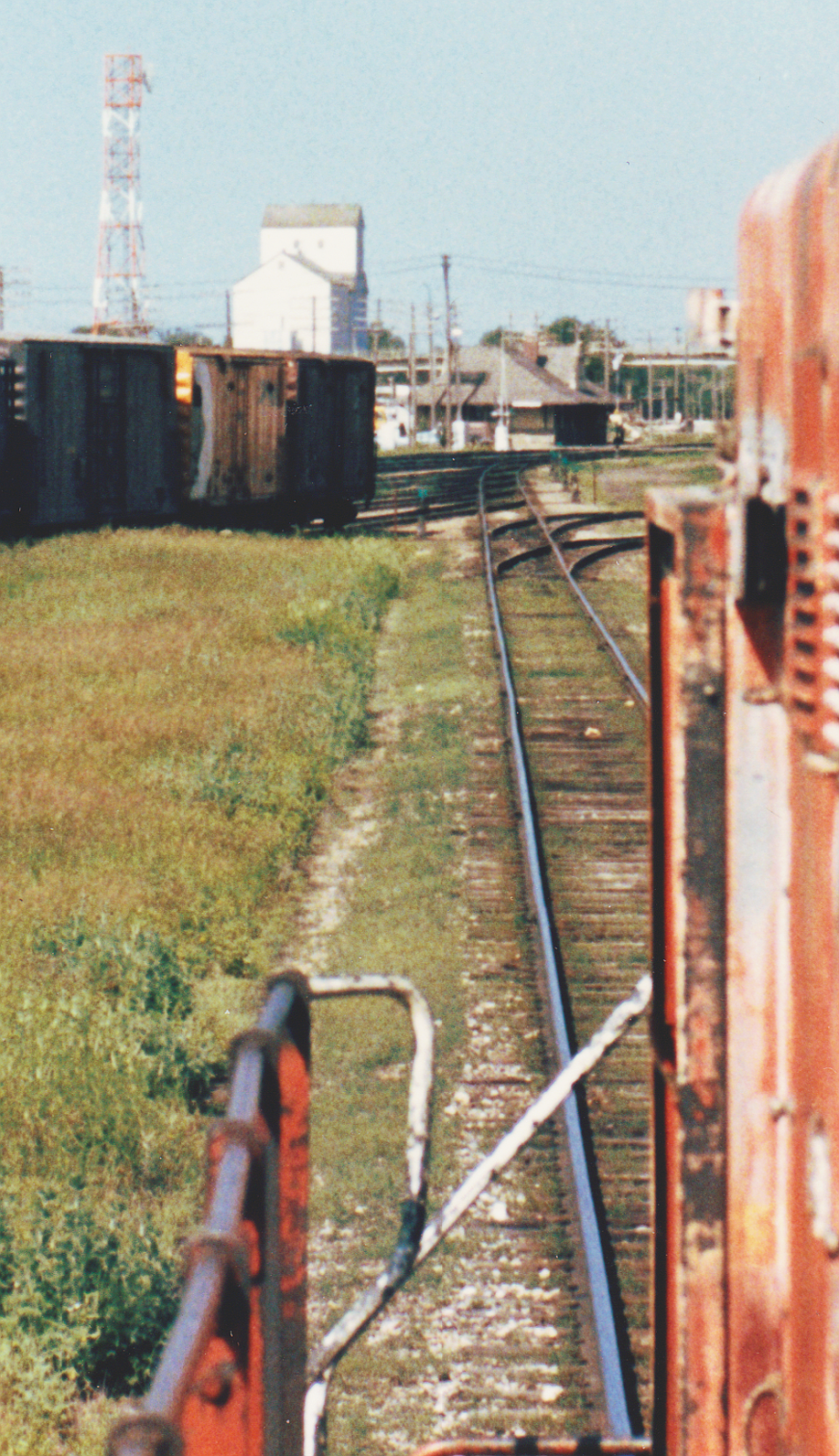 Having completed the morning's switching,
the 6569 runs down the yard ladder track toward the CP station. 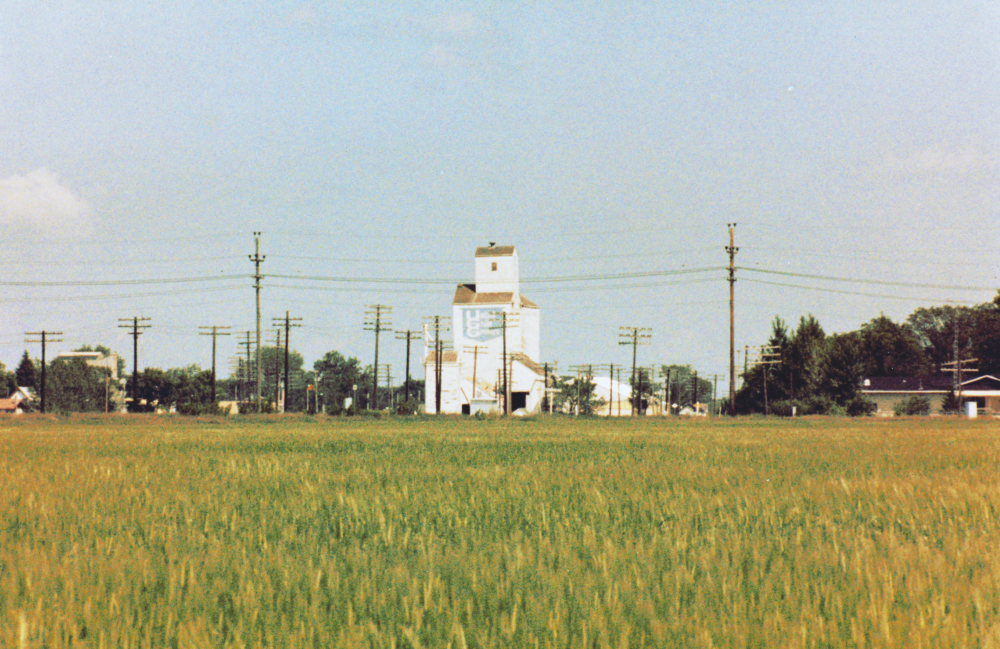 Probably zooming in from 18th Street towards West Tower.

While CN, as the 'junior' railway at Portage probably bears the costs of the diamond and interlocking ... consider the other railway systems also at this location.

... Keeping the wayside wire lines clear of each other as they cross must take some co-ordination. 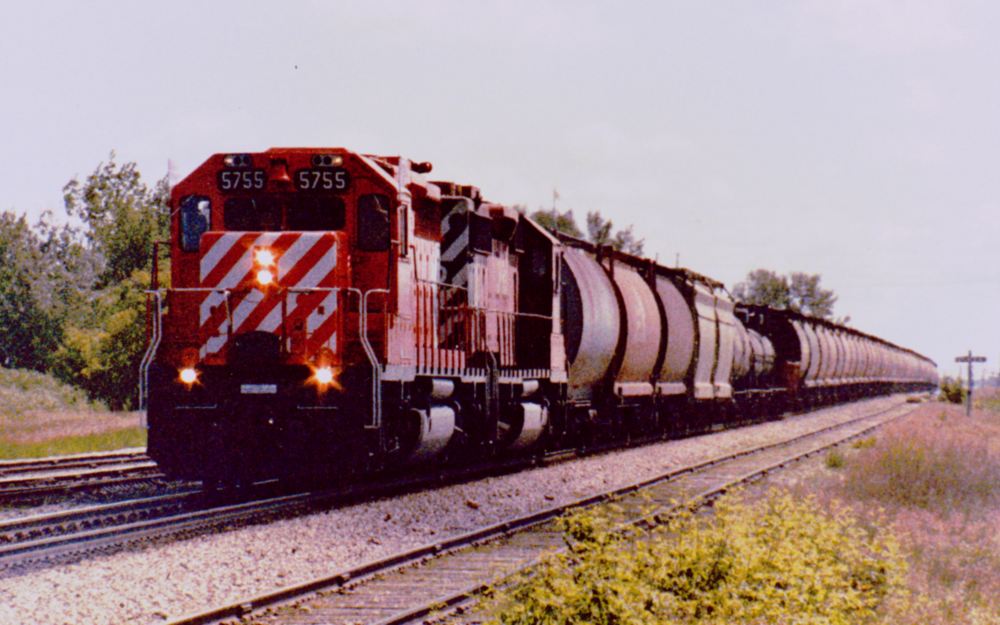 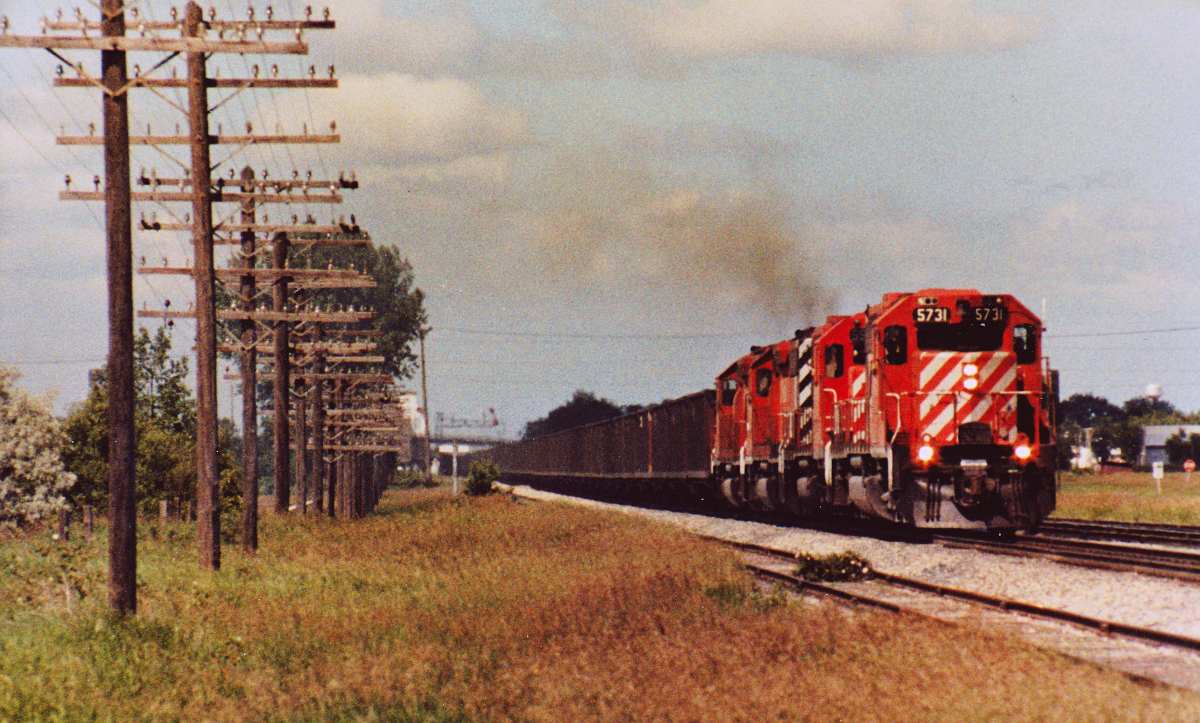 During this era, CN and CP both seemed to operate these unit coal trains.
They were likely headed for Ontario Hydro thermal plants .

With its tailend called clear of the diamond,
extra 5731 east is working its way up to track speed as it approaches Stephens Avenue.