Displaying a great deal of generosity and forbearance, my aunt and uncle in Portage la Prairie, Manitoba welcomed our annual warm season visits. I have never created a list of the actual years of our visits, or totaled the number of weeks (actually months) we lived with them while on vacation.

In some years we drove out, in others we arrived by train. Once there, we would often receive deluxe camper van tours of the entire surrounding area, including Winnipeg's railway facilities.

While my photos are not the best, some of the equipment and railway line features photographed no longer exist.

At this stage, I was using a manually-set SLR, probably with ASA 400 film. This was a major improvement over the slower films because at least - once your vacation was over and your photos were developed, printed and paid for - the pictures were not a total loss for lack of adequate daylight.

The main lines of  the CPR (Carberry Sub) and the CNR (Rivers Sub) cross at Portage.

This first batch of photos was taken in 1985 and, we experienced what we generally referred to - meteorologically-speaking - as 'Vacation Weather' ... rain and overcast.

At the Portage mile board, the extra 5204 east is leaving town.

Just short of the CN Portage station, extra 5527 west has set off a tank car
and has recoupled onto the train
and the brakeman is completing the joint.

I don't know what make of B unit I was working with at the time,
but in 1977 on the CP
I learned that the air hose valve on 'these' works opposite to the convention.

That is, if a new trainman thinks train air is cut off
simply because the handle is perpendicular to the hose,
he will soon be proven wrong ...
and the engineer will be re-filling his reservoirs with some nice fresh White River air.

CP extra 6011 east is arriving in the west end of Portage.
During some eras of modern railway history, the CP found quite a variety of power to run on its trains.
As the crow flies, the leased QNSL unit is about 2300 miles west of its home rails. 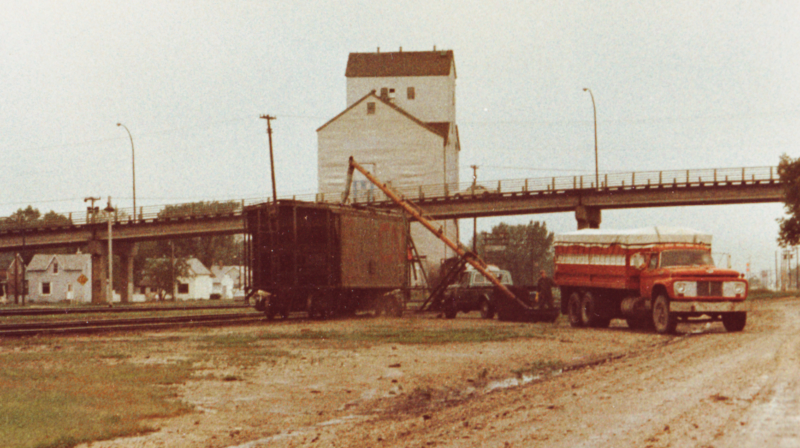 Simple technology that works.
In front of the CN station (off to the left) an auger is used to fill a covered hopper car with grain.
And the farmer is wondering why anyone would bother to photograph such an operation.
The rain is pooling nicely.

The extra 1027 west is just arriving in front of the CN station.
The lead unit was 28 years old at this point.
A potentially troublesome load of poles is located right behind the power
so the crew can spot any load shifting or potential fouling of adjacent tracks. 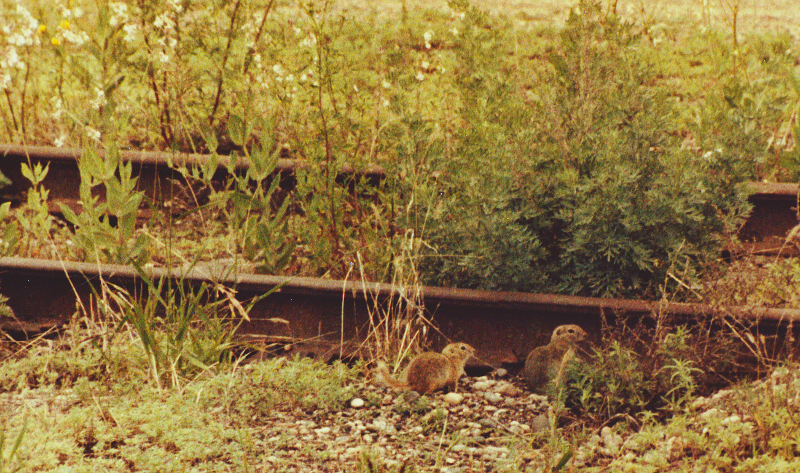 On an abandoned track which runs over from the CN side, and under the overpass shown above
we can see two Richardson ground squirrels.
The one at the left seems to be a 1985 model. 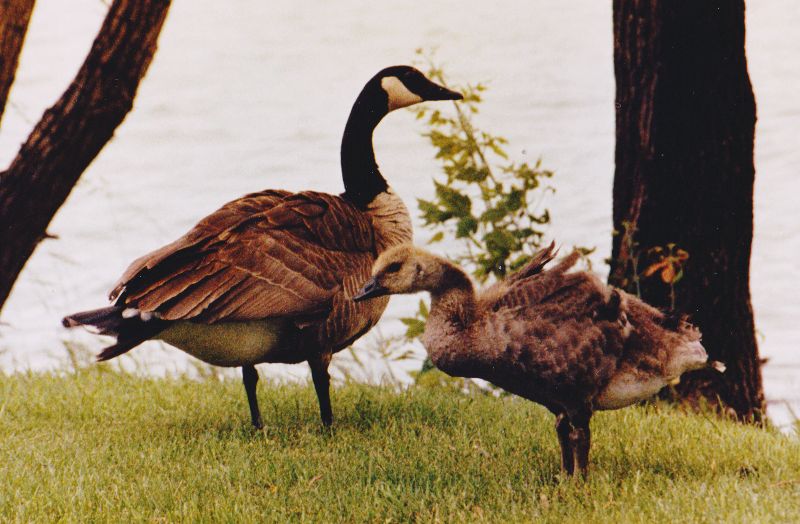 At Portage's oxbow lake you can also get excellent "builders' photos"
of new geese as they roll off the line.

This map of southern Manitoba, from the same era as these photos, shows Portage relative to Winnipeg. The grey lines represent railway lines - some of which would have been abandoned or pulled up by the time of our visit. Throughout its modern history, Portage has always been the site through which a tremendous amount of rail traffic passes. At the west end of town, the CN and CP main lines cross each other.

Before circa the 1990s, railway branch line abandonment was much, much more regulated than rail line abandonment is today, as the lines were still seen by many as a key transportation link.

With a well-developed system of paved roads, and trucks able to carry almost any load imaginable - by the 1990s there was little justification for keeping the sleepiest of railway lines through the countryside.

As the rate of abandonment increased with deregulation, heavy grain trucks made small branch line country elevators obsolete. Farmers began to truck their grain farther and farther to large concrete elevators on primary and secondary rail lines. The cost of 'road maintenance' for moving grain from the remote countryside shifted ... from railways and their maintenance of way departments ... to local governments using tax revenue for the repair and maintenance of public roads.

After marking the station locations at Portage la Prairie (CPR) and P la Prairie (CNR), I used the Google tool to measure the mileage to the other CN features.

The East and West Tower names on the CNR are anachronisms.

At one point, the east interlocking tower would have controlled the eastern approaches of the Grand Trunk Pacific and Canadian Northern railways (and perhaps other roads, I'm still researching).

The west interlocking tower would have mainly been concerned with the CNR/CPR diamond. You can see the CP line veering south-west at West Tower. The CPR was the first railway here.

While visiting Winnipeg and enjoying attractions other than railways, my uncle would often shoulder-drive or stop the camper on the overpass shown at the right lower corner. That is, on Fermor Avenue where it crosses the railway tracks. The tracks and hump radiate north-west from that point, as you'll see below.

This is just east of the overpass, looking north-west.

This is just west of the overpass, looking north-west.
You can see that there are two hump tracks.
The CP power was at the headend of a unit train of coal gondolas.

With one of the hump yard 'control towers' in the grainy distance,
the yard humping power is pulling down a cut of cars, before reversing it over the hump.

This is the concept behind the:
'Mother unit paired with a Hump Booster'
or 'cow-calf pairs'
or the 'cut down yard slug'
... or any other descriptive names railways could dream up for the arrangement.

Still with the overcast weather, we see VIA's Canadian (No 2) arriving at the west end of town. During this era of passenger train history a timetable was useless for identifying whether this was a CNR-routed or CPR-routed transcontinental train. By the time any passenger train was near Winnipeg during this era, it might be 12 hours late.

VIA tended to keep its inherited rolling stock on the railway from which it was inherited. Without checking the locomotive numbers, you can see VIA paint peeling to reveal action read on the lead unit roof (6569 - then 33 years old) . You can also see CPR stainless steel dome cars.

In the late 1970s, an ex-CNR dome car might be put on passenger train between Jasper and Vancouver (or not, as I experienced) if they had one in serviceable condition.

On the CPR Carberry Sub timetable above, you can see Shepp as the location where the CPR had a short-lived connection which allowed the Canadian to cross over from CPR to CNR rails eastbound to use the CNR Portage station ... and crossing vice versa westbound. With VIA's dropping of the CPR-routed Canadian, the connection was later torn up.

In recent days, have been unable to find the exact location of this CP extra 8704 west. I remember the site as being north-west of Portage and I may have travelled some distance to outrun the train and to get a good photo of it.

An interesting piece of freight (below) is the combine against the rear bulkhead of the flat immediately before the van.

There is so much special 'vacation rain' that the dirt roads are rutting.

Just when you think it can't get any darker ... Extra 1006 east is seen leaving town at the Portage mile board. 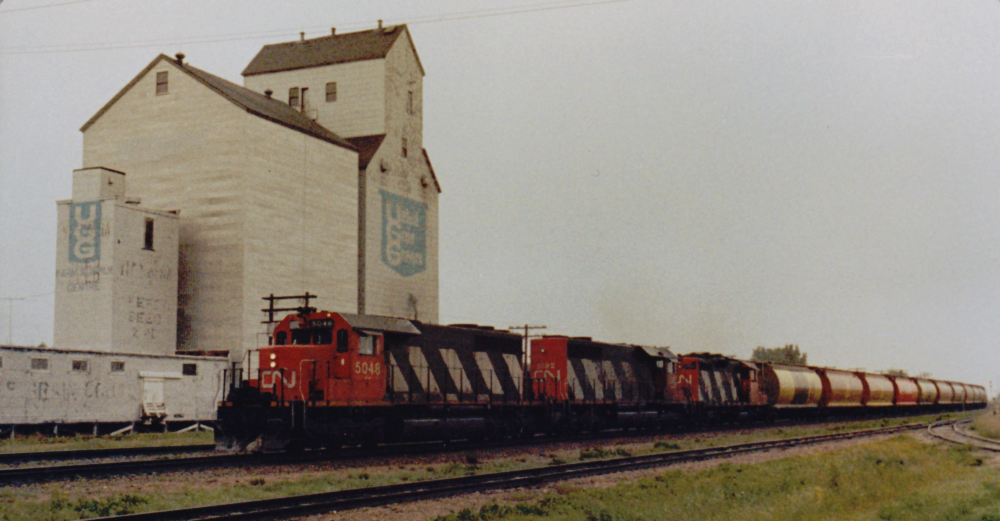 The extra 5048 east is arriving in town. 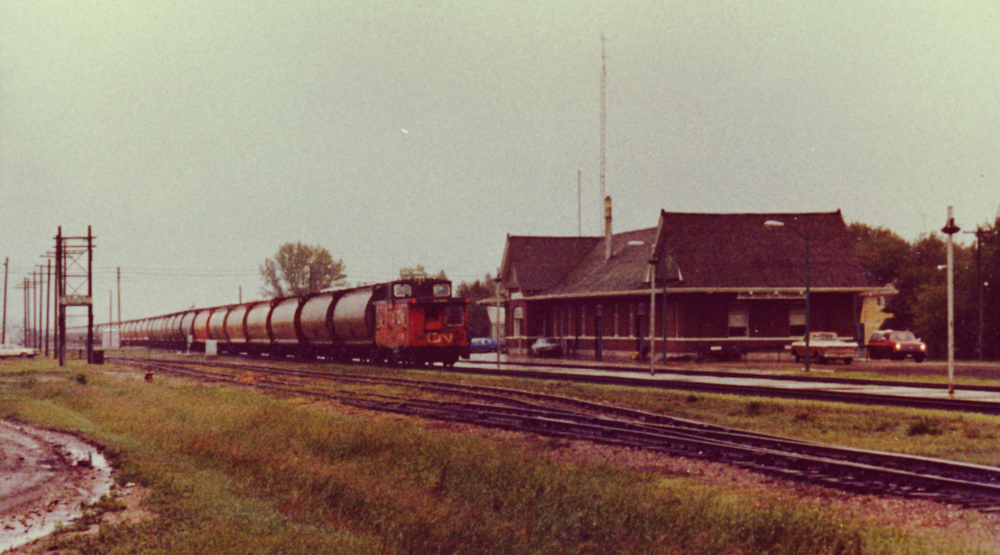 The caboose of the extra 5048 east passes by the CNR station ...
for a while it was the union station of the Grand Trunk Pacific
and the Midland Railway (Great Northern).

The Canadian Northern had their own station at Portage.