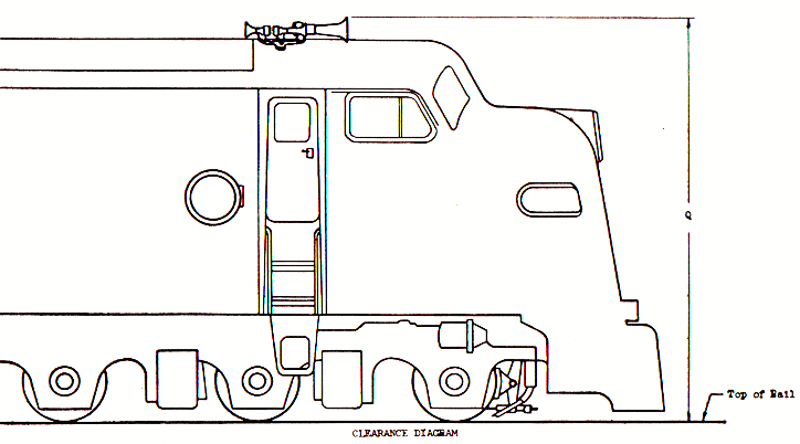 Locomotive whistles are used for public safety and for signaling to railway personnel.

Today, locomotive whistles continue to provide a backup safety warning for the public when there is a sudden, unreported failure of an automatic protection device at a public railway crossing. There is also a great number of public crossings in Canada having no such protection.

At the beginning of the diesel-electric era, public awareness of the railway warning to 'stop, look and listen' before moving onto a public crossing was probably greater than it is today ...

People were being vigilant for a steam whistle (often 'played' with distinctive artistry); they were listening for clearly-articulated, percussive exhausts; and a pillar of cloud by day (tinged with carbon) would often signal a steamer's approach. As a generalization ... during the Canadian steam era, steam locomotive headlights were not illuminated during daylight hours.


Taken in Vancouver in July 1943, this photo shows a CNR locomotive built in 1909 by the Montreal Locomotive Works. Look at the steam dome immediately in front of the cab. Attached halfway up the dome's side is the cylindrical whistle. In the classic manner, it would be activated by a pull-cord from inside the cab. This provided plenty of opportunities for 'note bending' and other classic steam whistle artistry.

Give yourself extra points if you spotted the wartime modification to a locomotive appliance - the conical blackout cover on the locomotive headlight. Two years after World War Two began in the Pacific there were fears that a Japanese invasion or an attack against coastal targets might take place.

At Durand, Michigan in July 1956 is a Grand Trunk Western Railroad (owned by the Canadian National Railways) Schenectady-built Alco locomotive, which was built in 1942. In order to effectively project the sound of the bell and whistle warning devices, they are located as far forward as possible. You can see the whistle just to the right of the smokestack. Ergonomically, this location would be a little better for the crew as they would be more protected from this regular assault on their hearing.

However, because of their distance from the cab, neither device could be operated by pull cords. In many cases, the remote-control whistle mechanism limited the 'artistic expression' of the engineer.

Beginning around 1930, Canadian railways began to experiment with gas-electric or diesel-electric 'cars' (sometimes known as motorcars) and diesel-electric locomotives. It was quickly revealed that members of the public - exercising normal caution at a crossing without automatic protection - relied on regular steam locomotive cues. The approaching cloud of locomotive smoke, the sound of the exhaust and the steam whistle were missing from the new vehicles.


Few collision victims expected to be hit by a glorified bus on rails ...

A CPR motorcar at Montreal, 1948.
You can see a small two-element whistle at the top left of the vehicle's square front.

As Canadian railways became serious about using diesel locomotives,
it was decided that the one 'steam locomotive cue' which could be retained and reproduced was the sound of the whistle ...

In attendance were representatives from:

A detailed account of the test methodology is in Appendix H of
Canadian Pacific Diesel Locomotives; Dean and Hanna; 1981; Railfare.

After the testing, the best horns/whistles for reproducing a steam whistle were considered to be:


The images below come from an American publication.

But consider the ubiquity of American railroad lines after World War Two ... whistles also had the side effect of making a loud public statement that a railroad's train was in the area. This potentially pleasant or annoying advertisement would be repeated often through the day and night, seven days a week.

Some railroad officers would have selected a pleasing musical chord for the sake of public relations and out of professional pride.

A few examples of early diesel whistles in Canada.


On a CNR MLW FA-1 we see a two element, bi-directional whistle.

Why have a rear-facing whistle element on a this freight locomotive?

Before semiconductors made portable radios practical ... hand signals by day, and lantern signals by night, were used between (headend) engine crews and (tailend) train crews. They were also used during switching.


(As the result of passenger car fires on moving trains, and other serious accidents early in railway history, passenger trains employed a special air trainline to relay train crew signals to a small whistle inside the locomotive cab)

Around a curve, on a long train, where vision was obscured, to send out or to recall a tailend flagman ... it was perhaps decided that the a rear-facing whistle above would ensure that the message could be heard.

When a proceed ('highball') signal was sent from the tailend, two short sounds from the whistle provided definitive confirmation that the message was received and the train was starting immediately.

On this passenger locomotive, all three whistle elements are facing forward (I checked the original carefully). Of course, providing a warning for a road crossing as a fast passenger train approached was one important use.

Another important 'forward signal' would have been the long sound which trains were required to provide at station mileboards, etc. - Rule 14 (m). If the signalling train was approaching a 'problem', this was the final opportunity to start some serious flagging to stop the approaching train.

Experimental ditch lights are a curiosity in this photo.

This particular Kingston-built B unit has a steam generator to provide passenger train heat - not all units of this CPR class did.

If you look at the post on this blog about Alco locomotives in 1949 (including those with hostler controls) you will see that those controls included a whistle. This would have been useful for signalling if a hostler was operating B units singly on a shop track - for example, during the process of assembling a multiple-unit consist for a passenger train.

Perhaps that is why this B unit has a whistle.