Something unique is missing from this postcard.
(answer below) 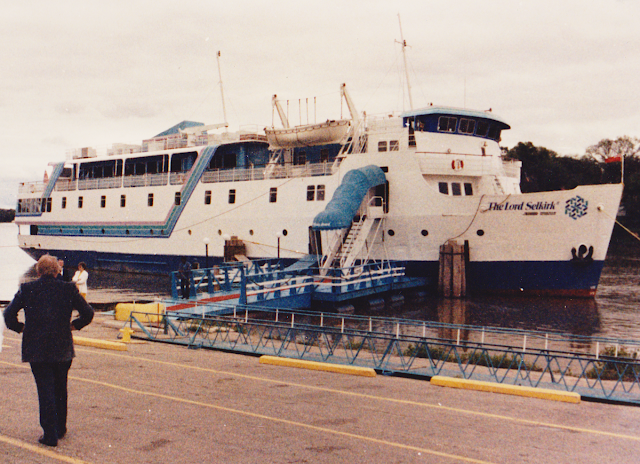 At Winnipeg, courtesy of my aunt and uncle, we enjoyed a dinner cruise on the MS Lord Selkirk II. This far inland, it is unusual to have ships of this size - or function - in Canada.

The ship was built locally and launched in 1969. It was retired in 1990, and cut up at Selkirk in 2015, with its scrap being consumed at the local steel mini-mill. Its final rusting place is seen below on GoogleEarth with imagery dating from 2012 - north is at the top of the photo.

The MS Lord Selkirk beached for scrapping at Selkirk, Manitoba. 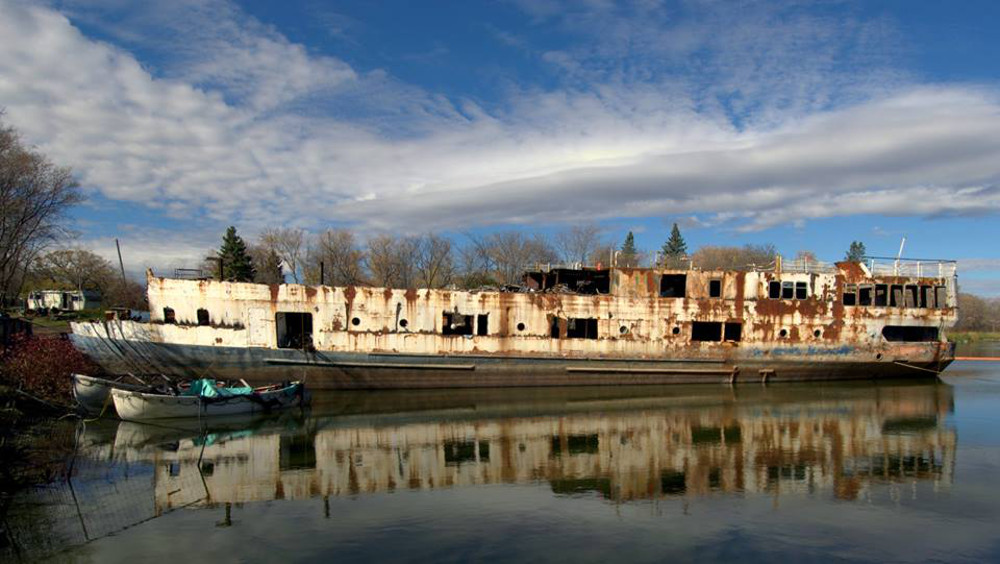 Thanks to CN engineer Mark Perry of Winnipeg for this photo of the Lord Selkirk, October 2015.

He did not expect to inherit the family estate and its title - he was a trained lawyer by the time he did. He decided to try to improve the lot of displaced Scottish crofters of whose plight he had become aware during his education at Edinburgh.

As was frequently the case, the demographic inconveniences of Britain were 'solved' by shipping people to Canada. Not only did this cause problems with the Metis and First Nations already in the area of Selkirk's new Red River colony, it also increased tensions between the Hudson's Bay Company and the North West Company. (To force his land grant, Selkirk had bought his way into the HBC - it was their turf, not that of the British government ... or of the First Nations etc)

The Battle of Seven Oaks - previously called a 'Massacre', I think, because it was won by disgruntled Metis - resulted from Selkirk's making up his own food laws in them there parts. After all, he was a trained lawyer, an important shareholder of HBC and an Earl - what did he not understand?

Actually, he hadn't realized that his settlers had been plunked where there was NO FOOD - at least not enough locally to keep the colony going until it became self-sufficient ... The imported British grains and other cultivars were not suitable for the climate of Winnipeg! He again took the law into his own hands after the Battle of Seven Oaks, and spent a good deal of the rest of his fortune defending himself in court.

one tradition of the Selkirk settlers did survive to be practiced aboard the MS Lord Selkirk II ...


The LIMBO!
This dance had a degree of social and cultural popularity in Canada in the 1960s.

It was probably entirely unknown to the Selkirk Settlers.

Before the ship's final scrapping in 2015, it sustained a devastating fire in 2012.
Coincidence? ...

You be the judge! 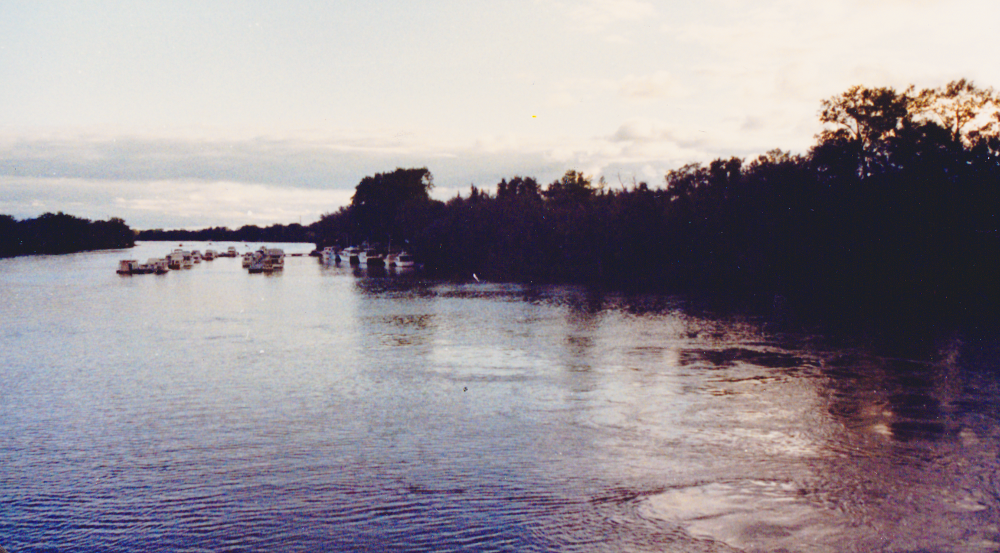 A view from the Lord Selkirk on the Red River in the evening. 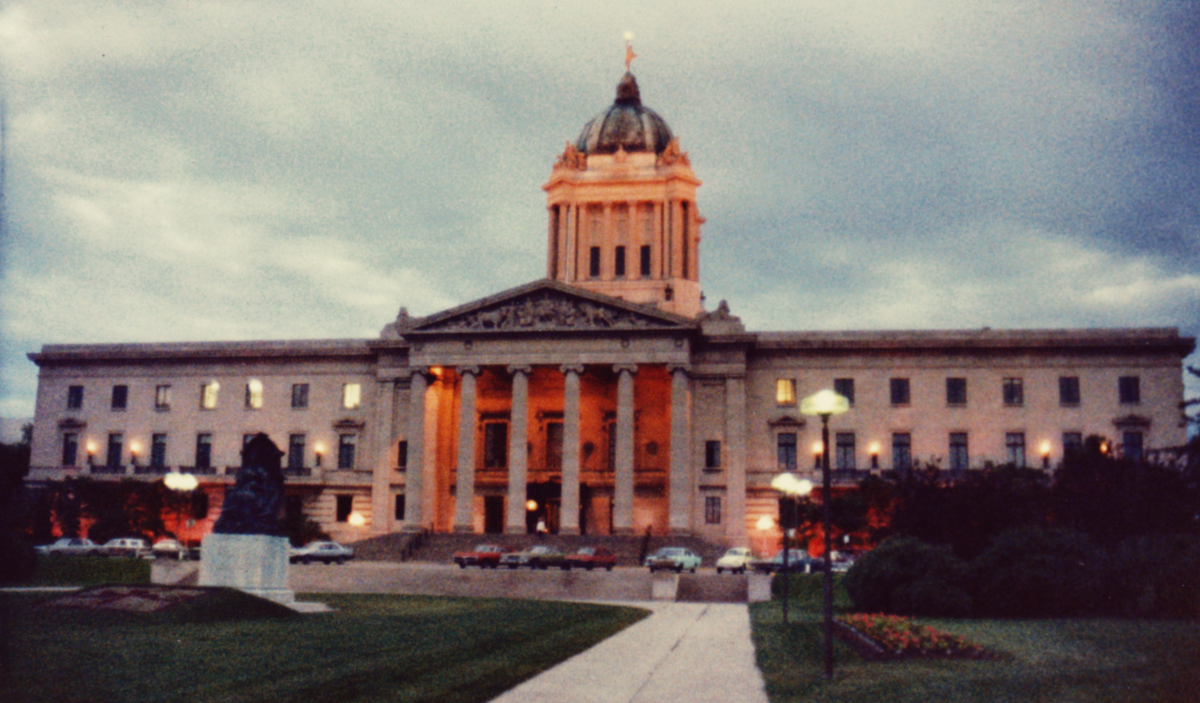 The Manitoba Legislative Buildings in the evening.

On this old postcard, mailed in 1927, you'll notice that a famous feature is missing.


The Golden Boy (officially 'Eternal Youth') with his sheaf of wheat and torch is not depicted. 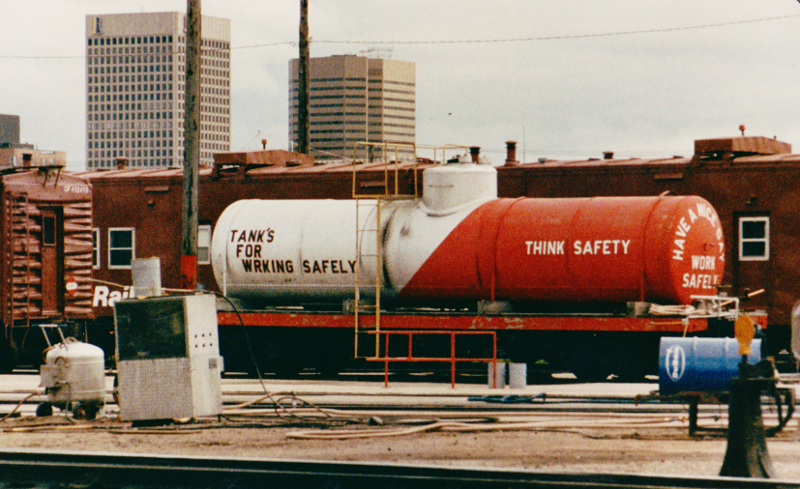 An old re-purposed riveted tank car is on the maintenance of way equipment track.
Speling and proper use of apostrophe's don't count.
It is hard to imagine any corporate whimsy like this on today's railroads.

With the Arlington Street Overpass in the background, the original style of multilevels is seen.

Probably at the Arlington Street Overpass is a hand-painted view of the yard from circa 1910.

Under the Salter Street Overpass are some vans waiting for their call to service.

Mark Perry, a CN engineer in Winnipeg, has identified the interesting building in the background as the CP boiler plant, seen from the north side.


In front of the local, you can see a left-sided snow plow. This would have been used on the double-track CPR mainline between Winnipeg and the Lakehead - most of the second track has since been torn up.

... In the earlier 1900s, everything that could roll would be put into service during the fall grain rush. The year's crop would flow toward the Lakehead and other eastern ports on the Great Lakes - St Lawrence waterway for export to Europe before the winter freeze-up. Canadian exports could continue through Quebec City and Halifax during the winter, but transportation was more expensive by rail than by water ... back in the era when grain was shipped in 40 foot boxcars and when most freight and passengers travelled by train.

All sorts of interesting equipment are seen (or imagined) in this zoom shot toward the Salter Street Overpass.
The mechanical refrigerator and other insulated cars to the right are probably doomed to scrapping at Selkirk because of improved technology: refrigerated intermodal containers.

Below is a rough map of the CPR yards circa 2015 with north at the top of the image.
I believe the label 'Stn 181' is bisected by Salter Street.
The former CPR Winnipeg passenger station is at 181 Higgins.
Downtown Winnipeg is marked by Google.


Near the intersection of Dawson Road North and Plinguet Street, the map pin indicates the location of
the Greater Winnipeg Water District yard and shop - seen below in 1985.
Its yard tracks radiate south-east from the pin.

I could find no reference to the coach above after a casual check of my earlier Trackside Guides.
Two tuscan red CPR private cars were stored to its left - I have no clear photos of them. 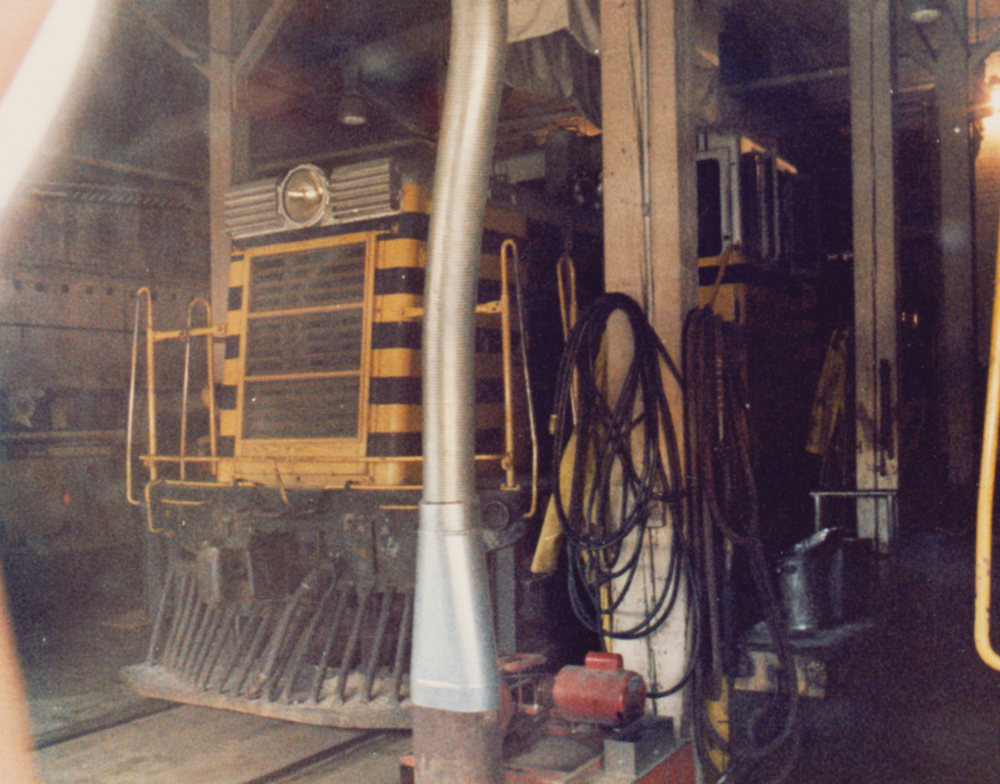 One of the GWWD's four, 44 ton GE locomotives is seen through the glass of the shop's closed door.
Notice the classic steam-style pipe pilot.

Flanger 315 with three cabooses.
The distant one seems to be of CPR origin.
Notice the light rail. 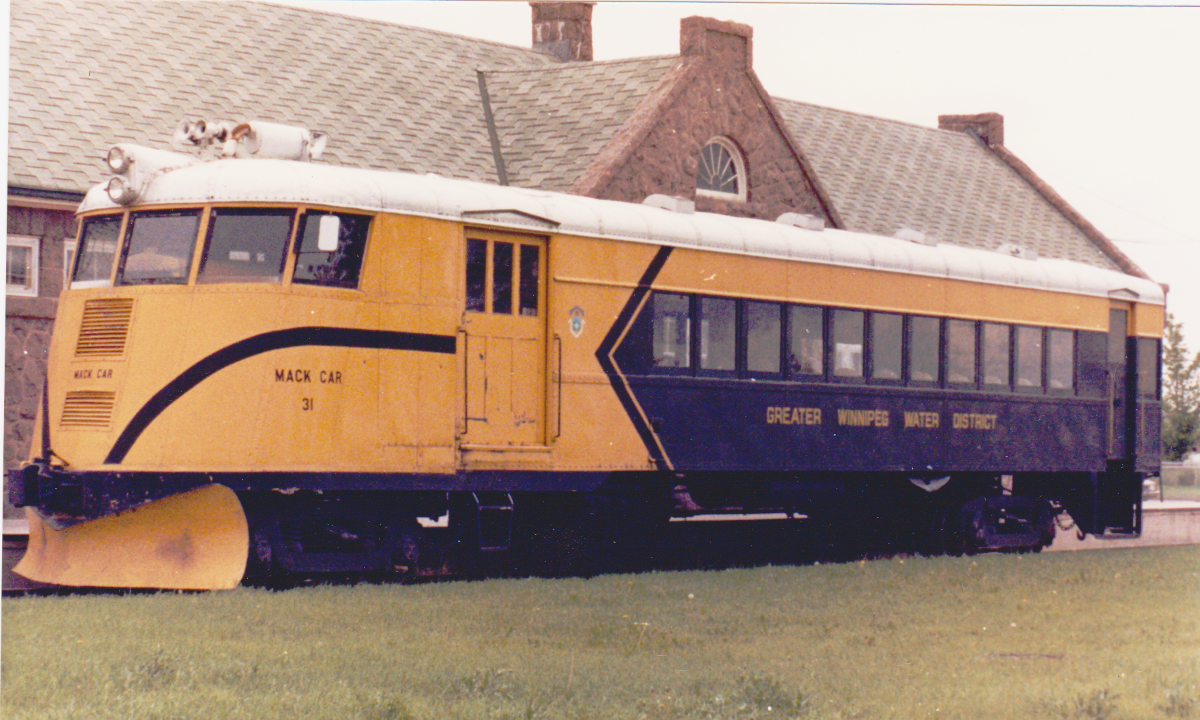 Built in 1928 by Mack, this gas-electric was involved in a level crossing accident in 1991 at Hadashville, Manitoba
and was retired in 1993.

Back in Portage la Prairie 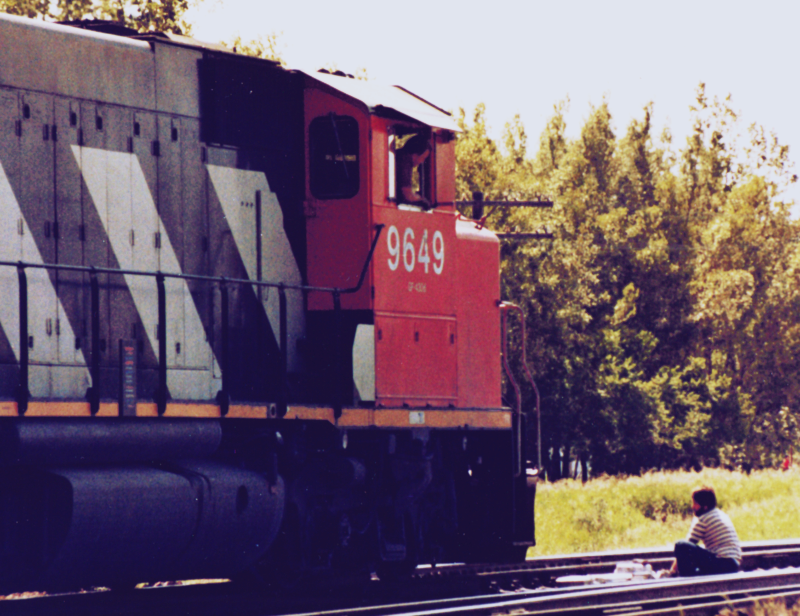 The extra 9649 west is leaving town at Kearns.
Perhaps the dispatcher was reporting 'code problems' with the switches?
The position of the brakeman and the attention paid to the points seem unusual.

Normally, when necessary and with copied authority from the dispatcher,
the power track switch would have been taken off power, thrown,
and the tailend crew would have restored it to powered operation after the tailend was clear.

... This brakeman subsequently walked ahead of the train to the next switch as well. 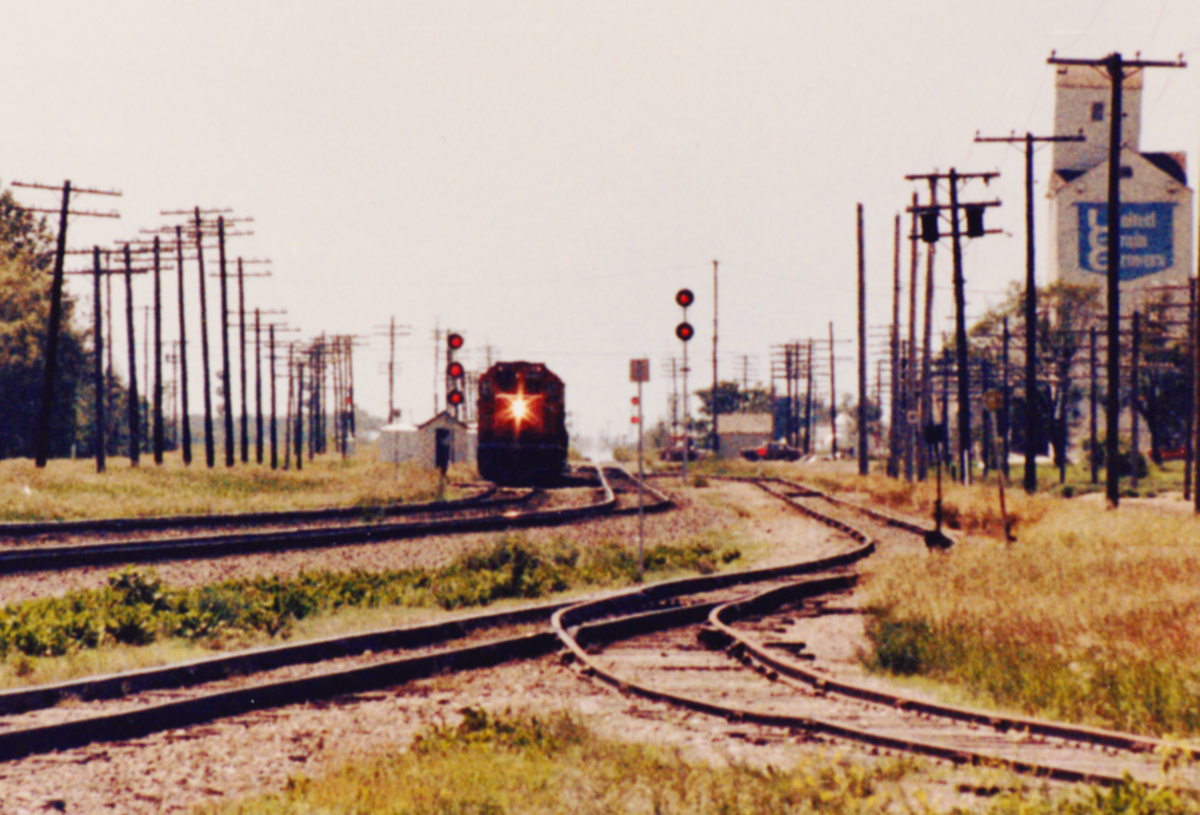 Extra 5523 east is receiving orders 'on the fly' from the operator at Portage. 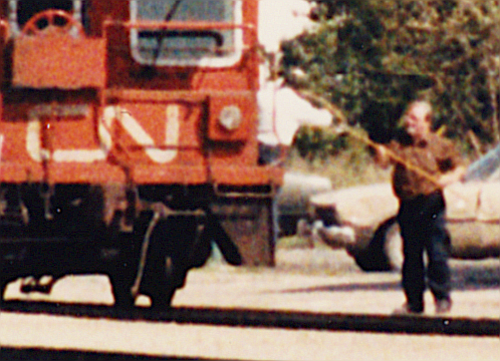 The CN train order device generally differed a little from the "p"-shaped canes used on the CP.

On the CN, a large loop of string into which the folded and rolled order(s) were tied,
was strung and clipped into an open wooden fork.

The appliance remained in the hands of the operator.

The engine crew and tailend crew each snagged their own loop of string and the order(s) tied into it.