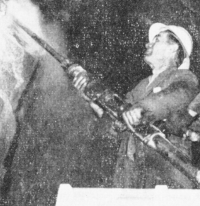 This post looks at how North American railways ensured that a special dimensional shipment, or a new larger rail car, could be transported over their lines in safety.

At the end of this piece are three articles my father clipped from the Canadian Pacific Spanner magazine from the 1950s and 1960s. They show three different systems used to check these clearances. As many will know, the dome cars of The Canadian required some advance work along the railway and that is the subject of one of the articles.

A management truism is that people don't plan to fail - they fail to plan ... I just hurt myself writing that. This failure is often the subject of TV news novelty stories. Overheight buses and trucks are regularly peeling off their top layer of metal when they come in contact with a restricted overhead clearance - this is often a railway bridge taking its revenge on its rubber-tired rivals. This type of accident seems to be caused by temporary traffic rerouting from a known safe route, becoming lost in a strange city, or reckless reliance on a GPS device.

After railways became an essential transportation system in North America in the late 1800s, it was advantageous to develop an integrated trans-national system which eliminated most of the risk of moving unusually large items ... about a century before laser measuring devices, portable computers and the internet.

In the 1960s, a directory was published annually, including every section of every line and its height and width limitations. Weight limits - often documented in employee timetables - were also included in this reference. Here are some of the basic dimensional standards used back in 1963. 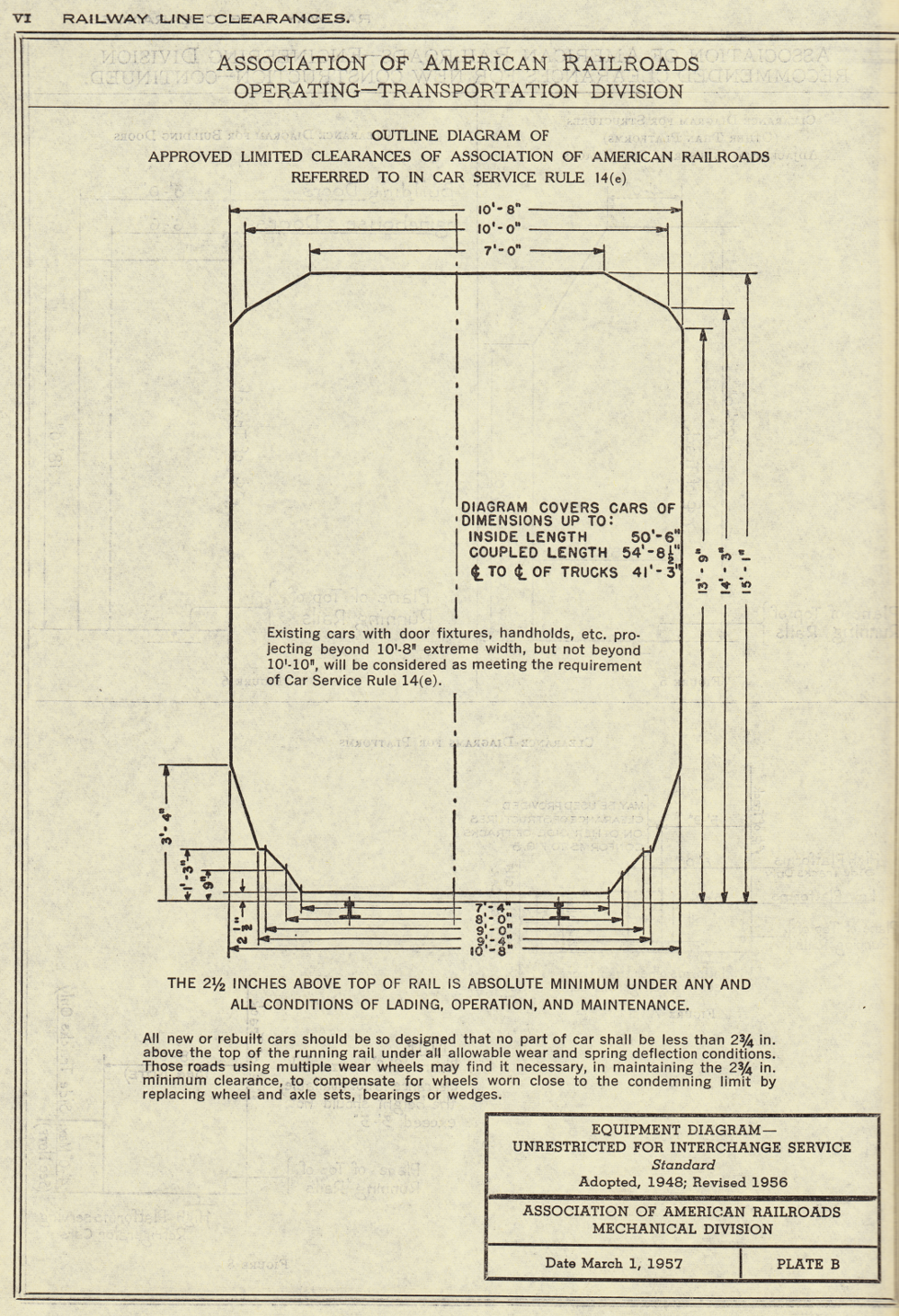 Here are the pages applying to the Canadian Pacific Railway in 1963.
Here's how to use this reference document.

If you look under the Atlantic Region, Woodstock Division, you'll spot the 'railfan famous' Norton to Cumberland Bay, New Brunswick piece of line with an unusually low 142,000 pound weight limit.

At the right side of that line, you'll see this section is represented in column No. 97.

To see how you can determine the dimensional limits on this line, join me down on Page 52, below ... 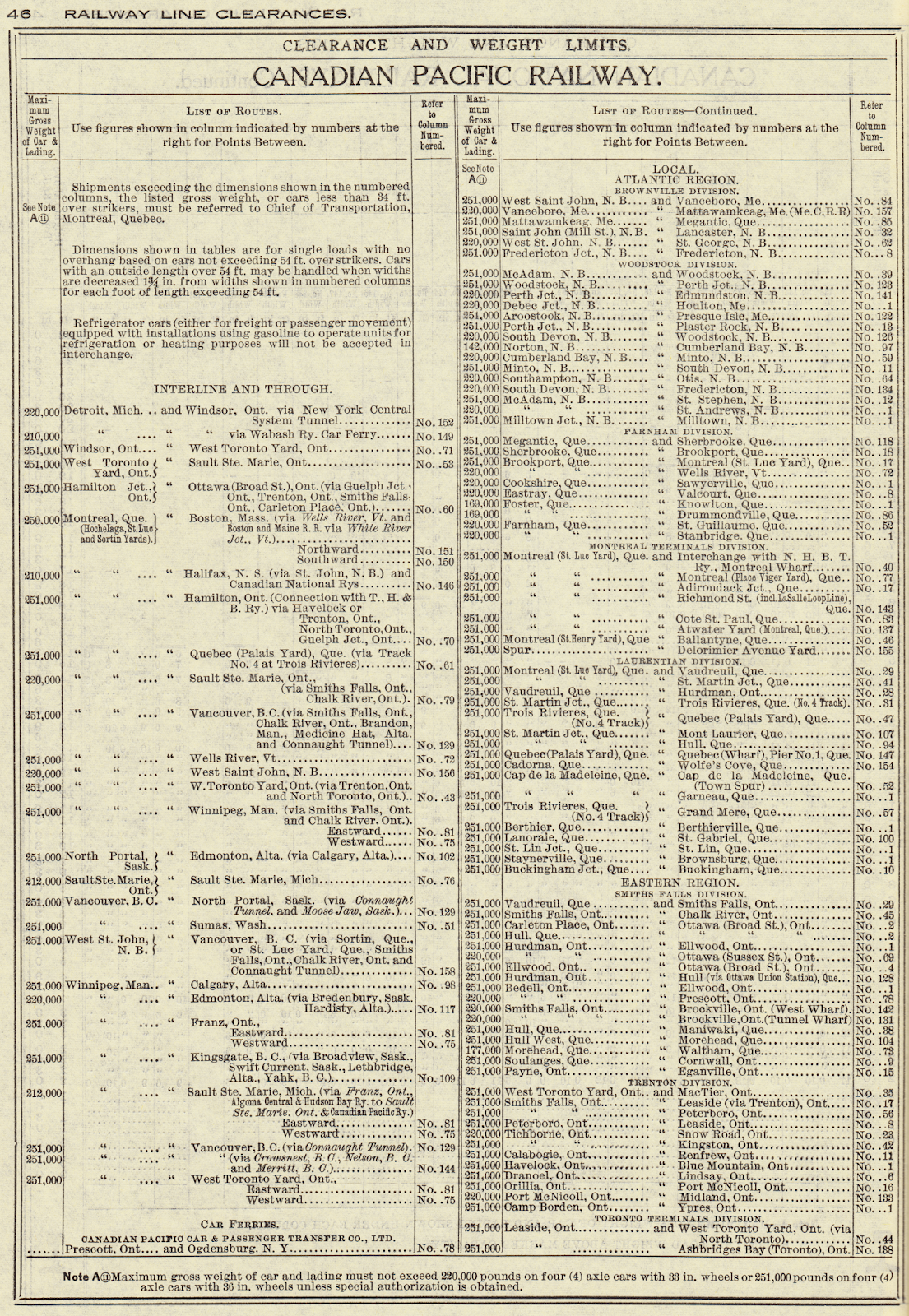 At the bottom left corner of the page is a rail cross-section and the column above it is graduated in feet and inches above the rail.

Looking back at column No 97, you'll see a dark black line capping the column, suggesting that the tallest shipment must clear 19 feet. At 19 feet, the maximum width is four feet, six inches.

Between 2 feet and 15 feet above the top of the rail, the maximum width is twelve feet, zero inches.

To see if it was theoretically possible to route a shipment over several railways, it would be necessary to list all the line segments to be used by the shipment ... then ensure that each line segment could handle the weight and dimensions of the shipment.

Keep in mind that the final dimension restrictions for a line segment might be cumulative - that is, there might not just be one tight clearance as the 'ruling clearance' for the line - there might be many places where structures and objects encroached on the passage of unusual movements. These might include railway truss bridges with their structures above the track, tunnels, rock cuts, road overpasses, buildings, etc.

... In fact, on the line segment listings on Pages 46 and 47, above, you'll also notice the dimensional limits of some railway watercraft used on CPR routes. Rail enthusiasts often enjoy model- or computer-based train operation and even dispatching. You never know ... there may be an extremely small and truly elite group who would enjoy sitting down with a reference such as this ... and spending hours calculating how a heavy, oversized shipment could travel between two points on opposite sides of the continent.

However, it is likely that there would be no market for a Freight Clerk Simulator! computer application. Many, many railway jobs were just not particularly glamourous or exciting.

Here are three articles looking at different methods of measuring or checking a line's dimensional limits. Below, you can see one of the workers standing by an air brake gauge and backup up whistle.
Probably included here is lever to dump the air in an emergency.