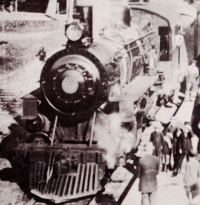 The route the Canadian Northern Railway assembled and built between Montreal, Ottawa and Toronto is explored here using CNR guidebooks from the 1920s and maps from a 1915 Canadian government atlas. 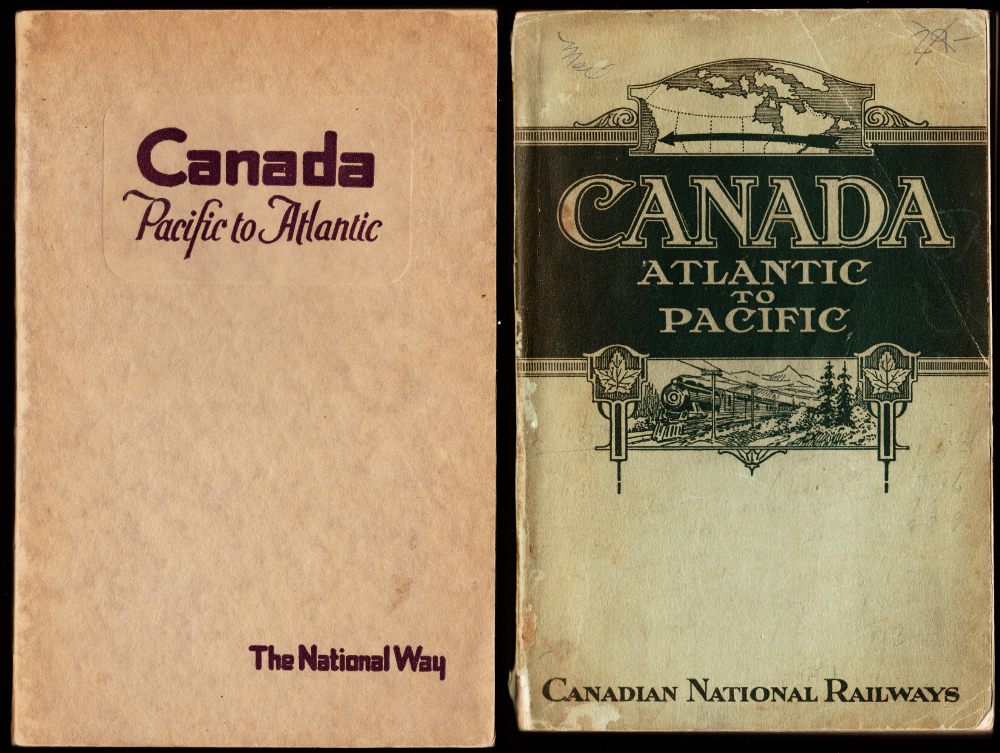 One of the books indicated that the former CNoR route was not followed west of Brighton by CNR passenger trains.


Some spelling correction and a better-researched, broader perspective of history - almost a century later - would alter *how these descriptions are written today. However, producing wayside stories for the many different lines inherited by the CNR system would have been a significant accomplishment during the challenging years of post-war consolidation.

* A fairly neutral example is that Adam Dollard may have been a bit of a brigand - not necessarily the saviour of Montreal. In the 1960s in a Quebec school, they were still telling us about his gallant stand. Reinforcing the idea that education is a life-long process ... I learned from MusiquePlus in the 1990s that the Fête de Dollard (as the Victoria Day weekend was then known) was the earliest fashion-police-approved date for Quebec girls to wear white shoes. But I digress ... 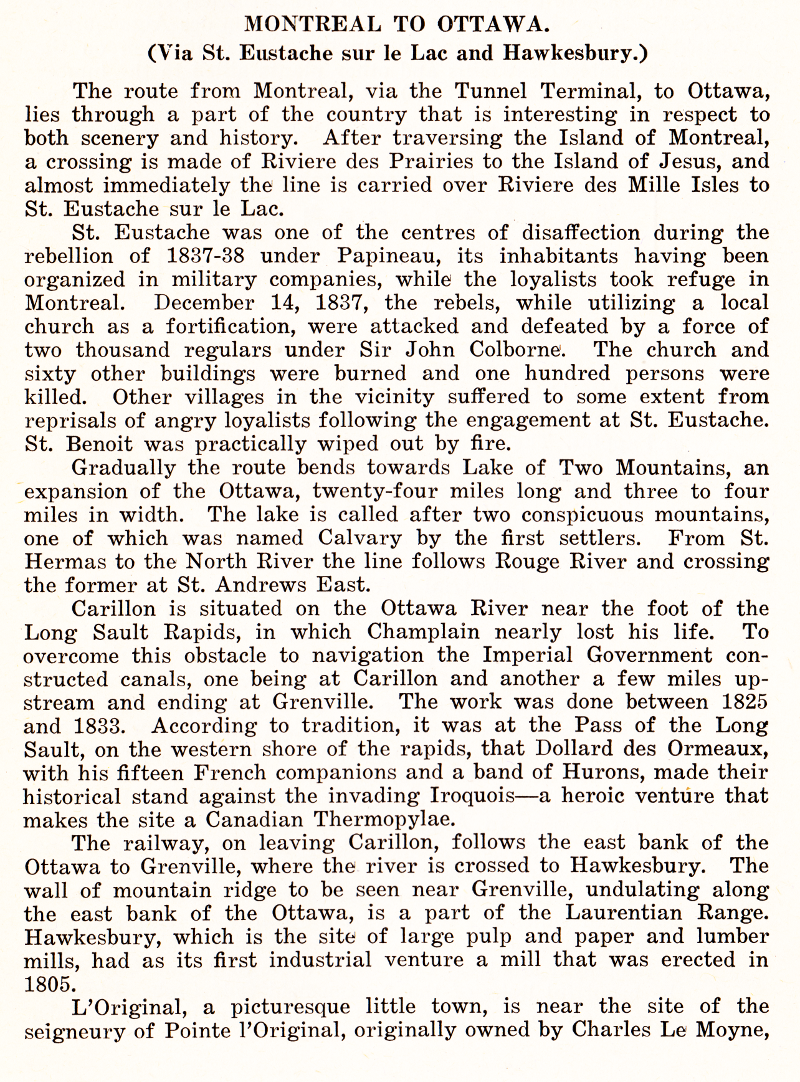 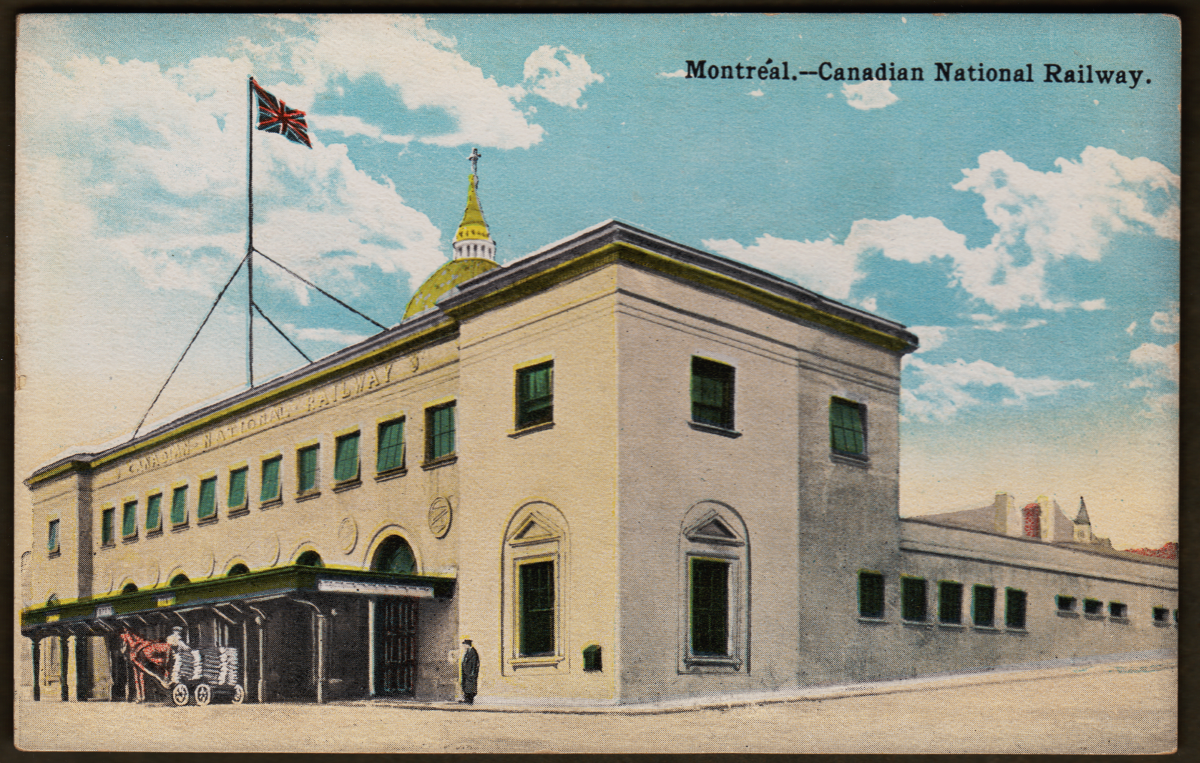 For regular visitors, this form of map is very familiar by now.
The Canadian Northern 'territory' colour can be seen along the Ottawa River in the Oka, St Andrews, Hawkesbury area. 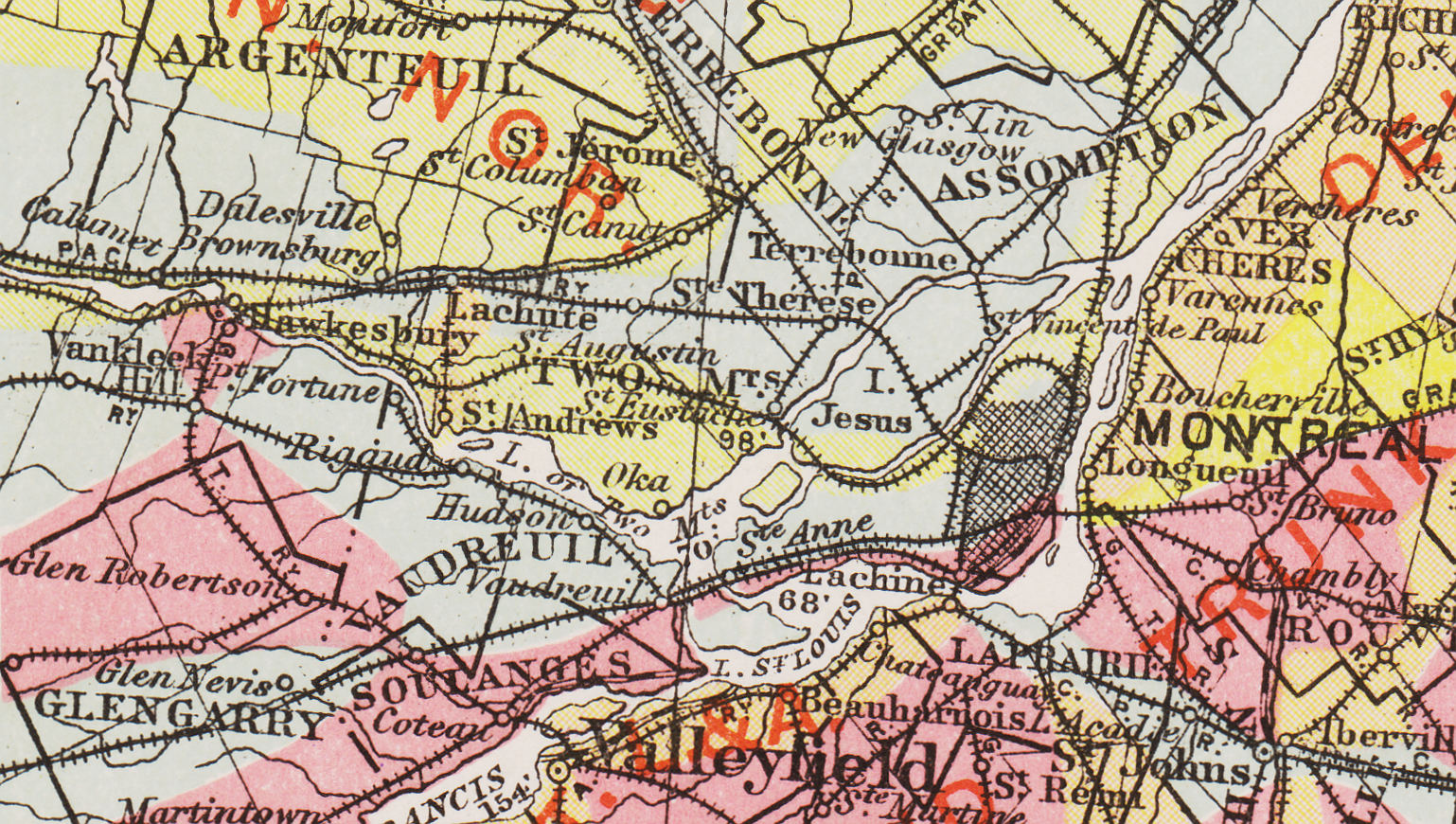 The Quebec sheet was used above - it shows Hawkesbury, Ontario.
The Ontario sheet is used below - it shows Grenville, Quebec.
A westbound would cross the Ottawa River from Grenville to Hawkesbury. One of the 1915 city maps is shown below.
You can see the Canadian Northern Montreal-Toronto lines in the south-east corner, I believe. The Route from Toronto to Ottawa

Once out of Toronto, the Canadian Northern runs north of the GTR and CPR, through Orono.
Between Brighton and Trenton, the CNoR route moves to the south - to pass through Deseronto. 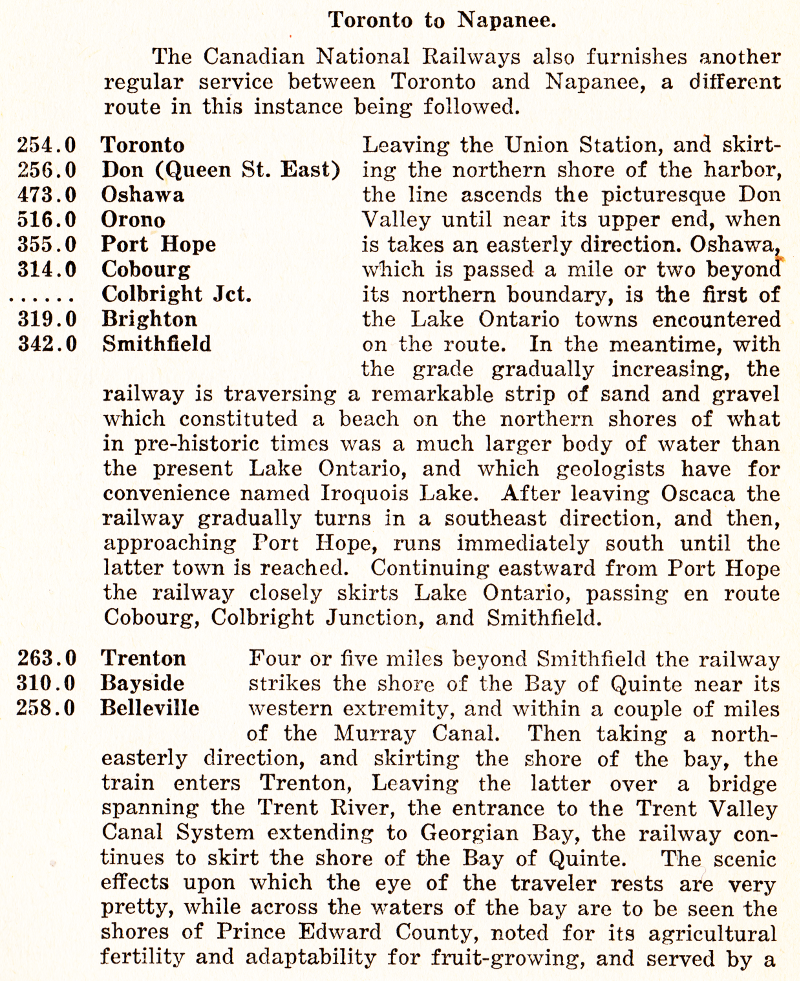 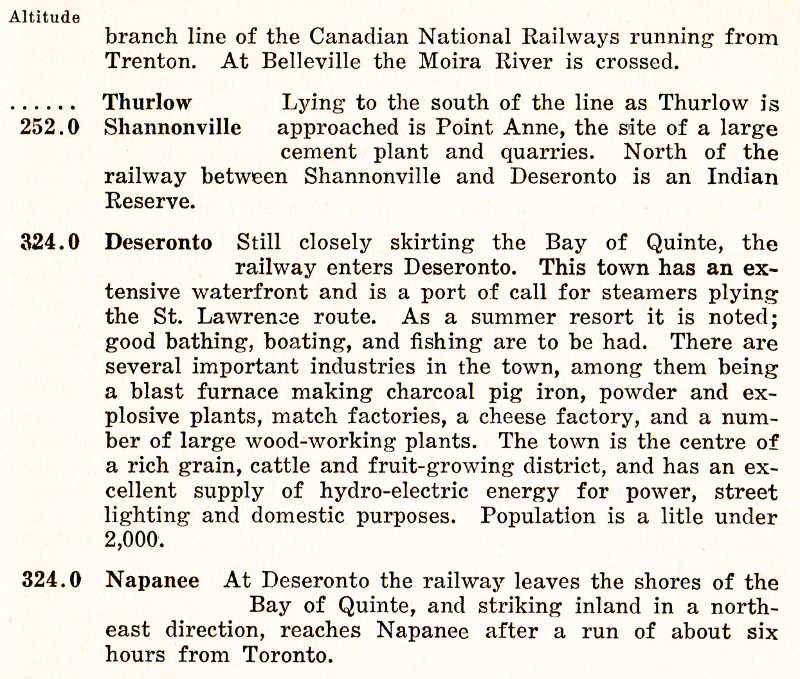 It would not have been Canadian Northern's intention to operate the eastbound trip to Napanee over a six hour period.

With Canadian National now operating both routes, it is clear that the former Grand Trunk double-track line is preferred for intercity travellers who don't want to make a thorough study of a route's milk can commerce.

The CPR/Canadian Northern Railway station at Belleville. (no date)

The Rathbun Company car building at Deseronto, circa 1892.
The Bay of Quinte waterfront is behind the building. We continue onward from Napanee to Ottawa ... 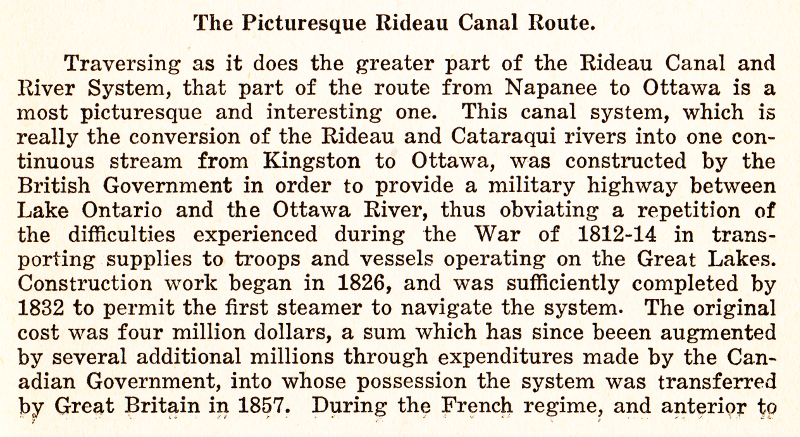 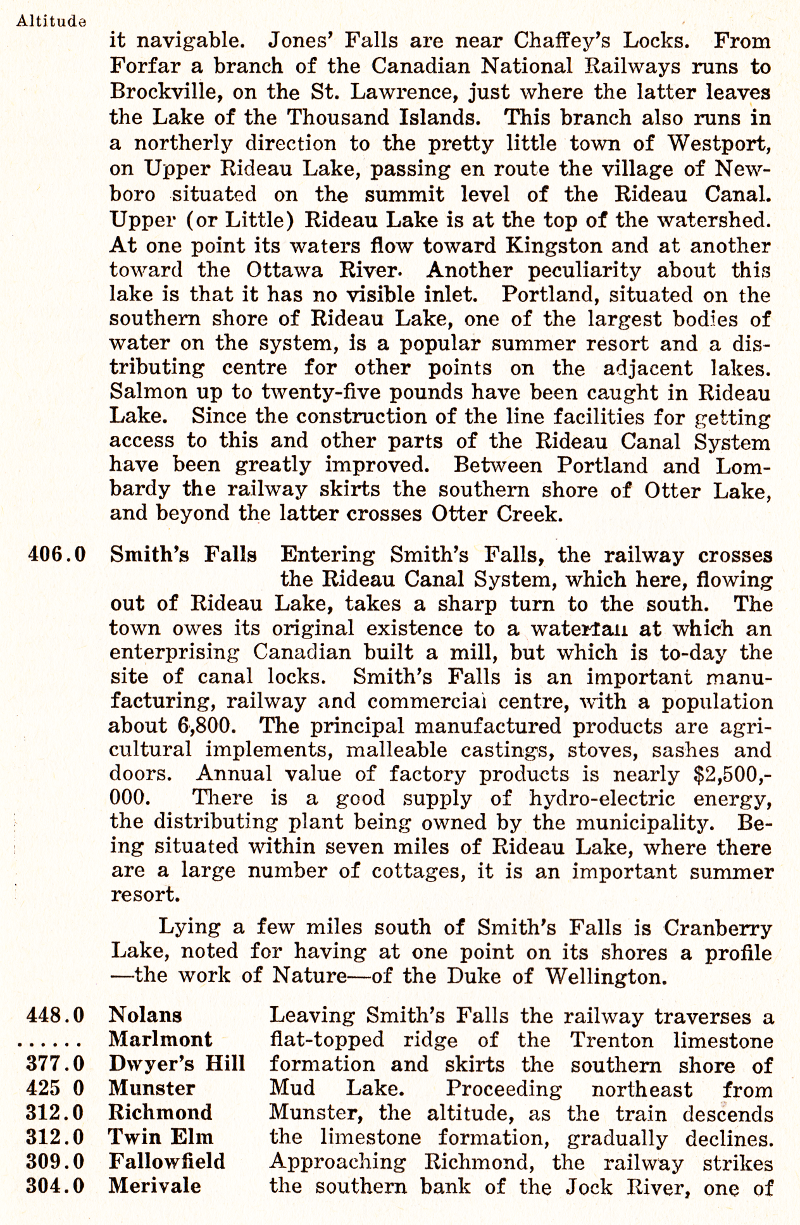 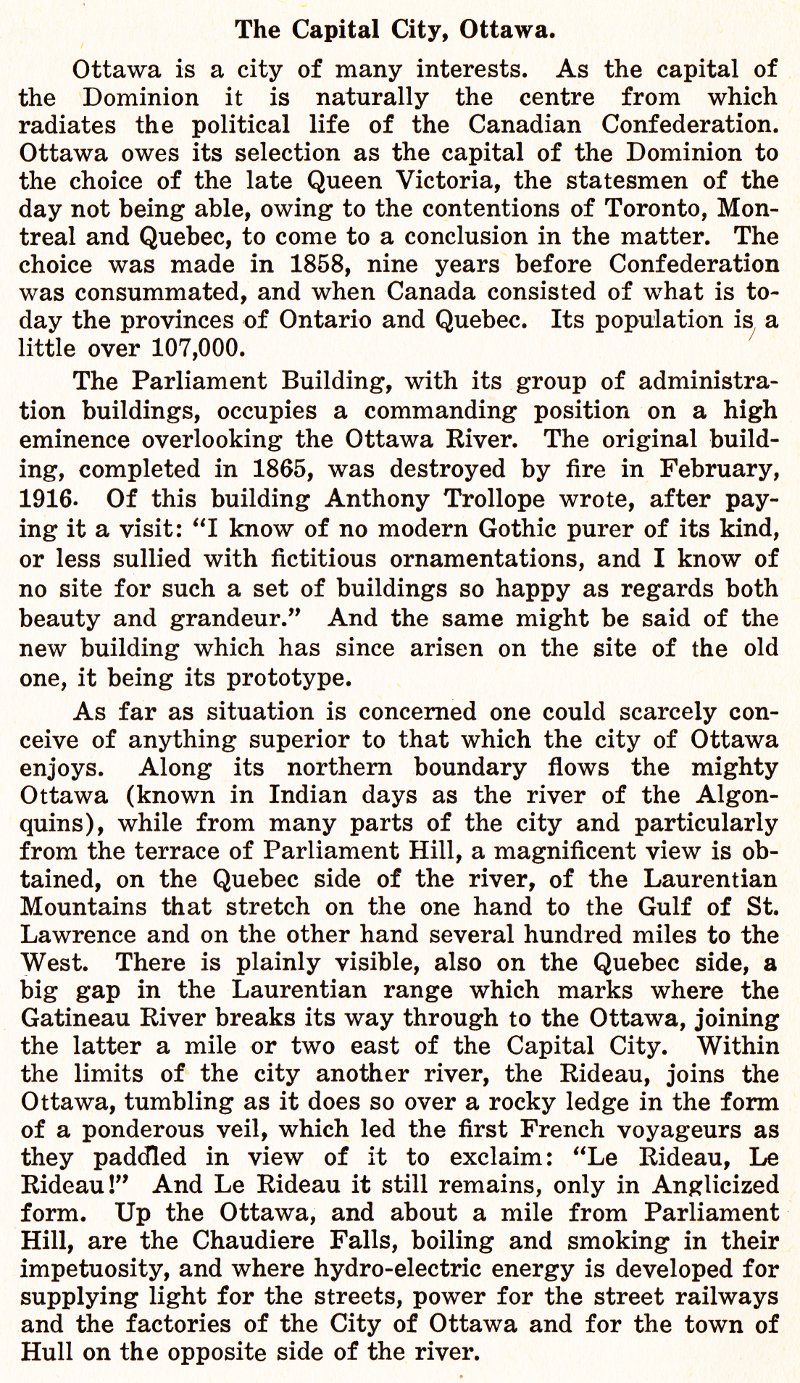 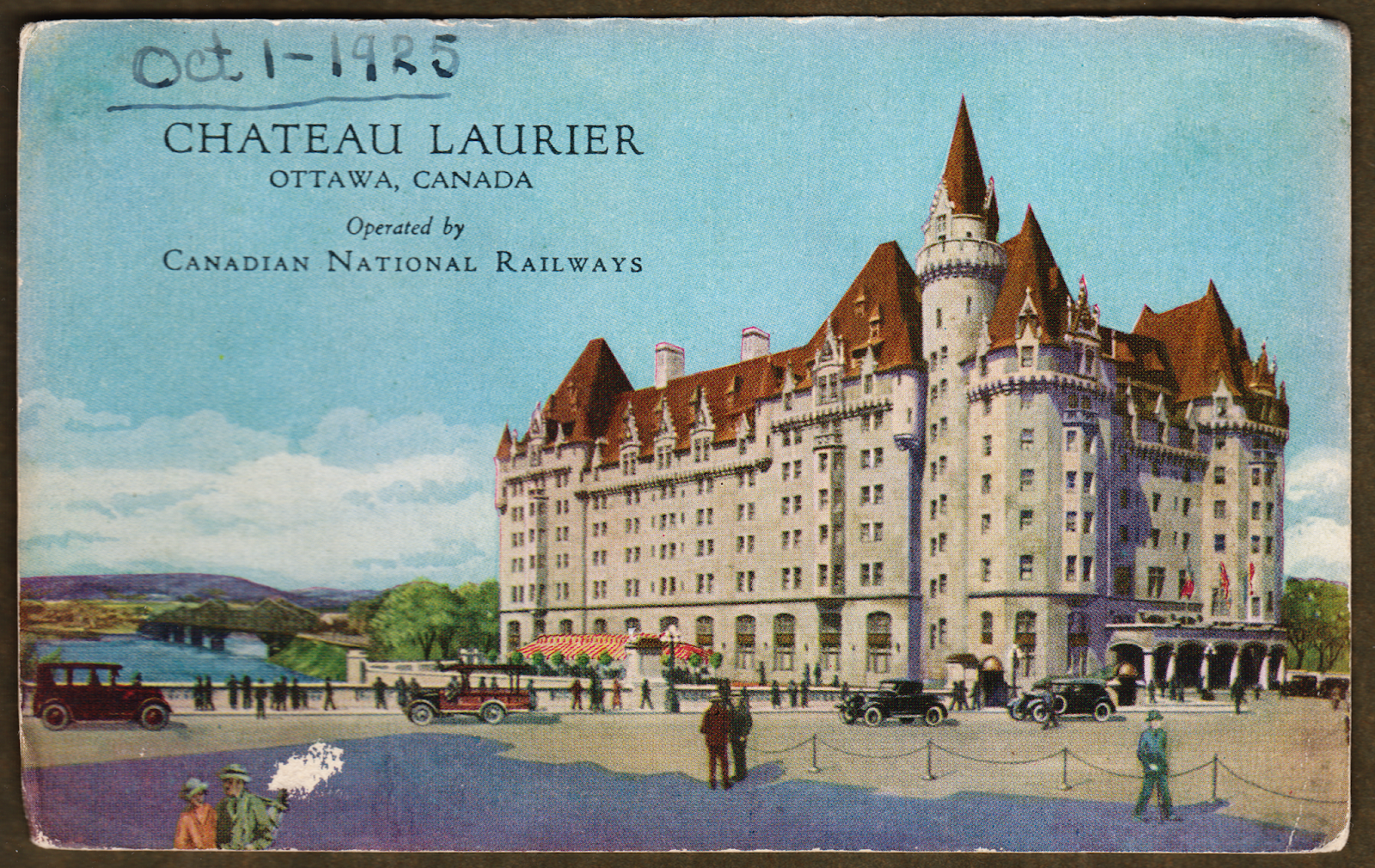 The hotel opened on June 12, 1912 - so the card must commemorate a personal date of the card's original owner.

My current reading of The Death of a President (1967) by William Manchester, brings me to this comparison ...

The Montreal-Ottawa-Toronto route of the Canadian Northern Railway ... once it was completed for through passenger service ... was operated by that railway for a period which was perhaps a few months longer than the presidency of John F Kennedy.