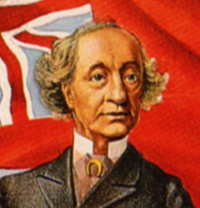 In happier times.
Apparently, this is the only known photo of Macdonald actually aboard a train.
In this book the view is undated, the private car is named Jamaica.

Sir John A Macdonald is shown in 1888 at Earnscliffe - his home in Ottawa.


Above is a well-known poster from the March 5, 1891 general election.
Macdonald won another majority for the Conservative Party - albeit a smaller one.
He died on June 6, 1891.

The account of the events after Sir John A Macdonald's death comes from this book,
which is also available at archive.org. 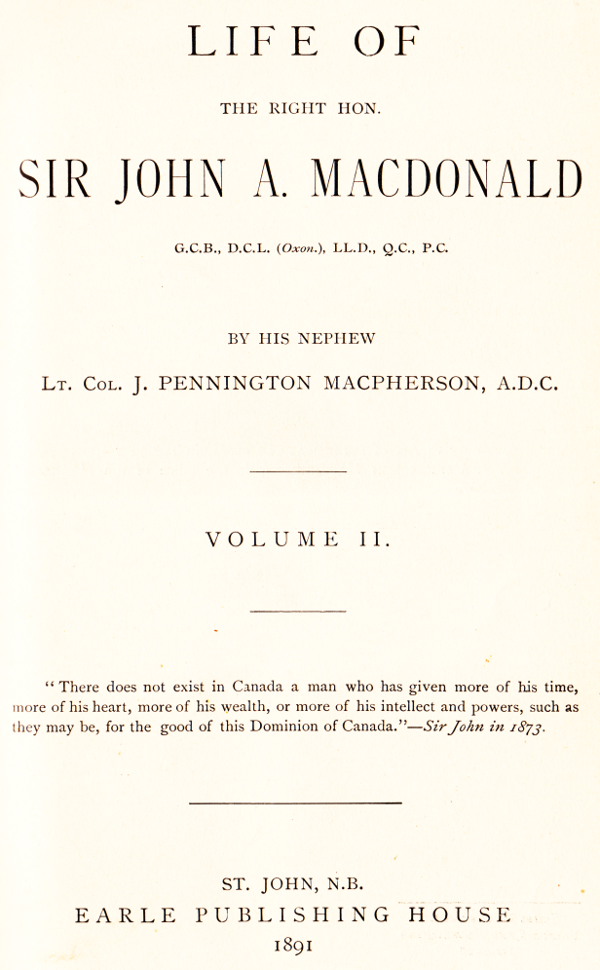 The recounting begins.
We are midway through a speech in the House of Commons by Liberal leader Wilfrid Laurier ... 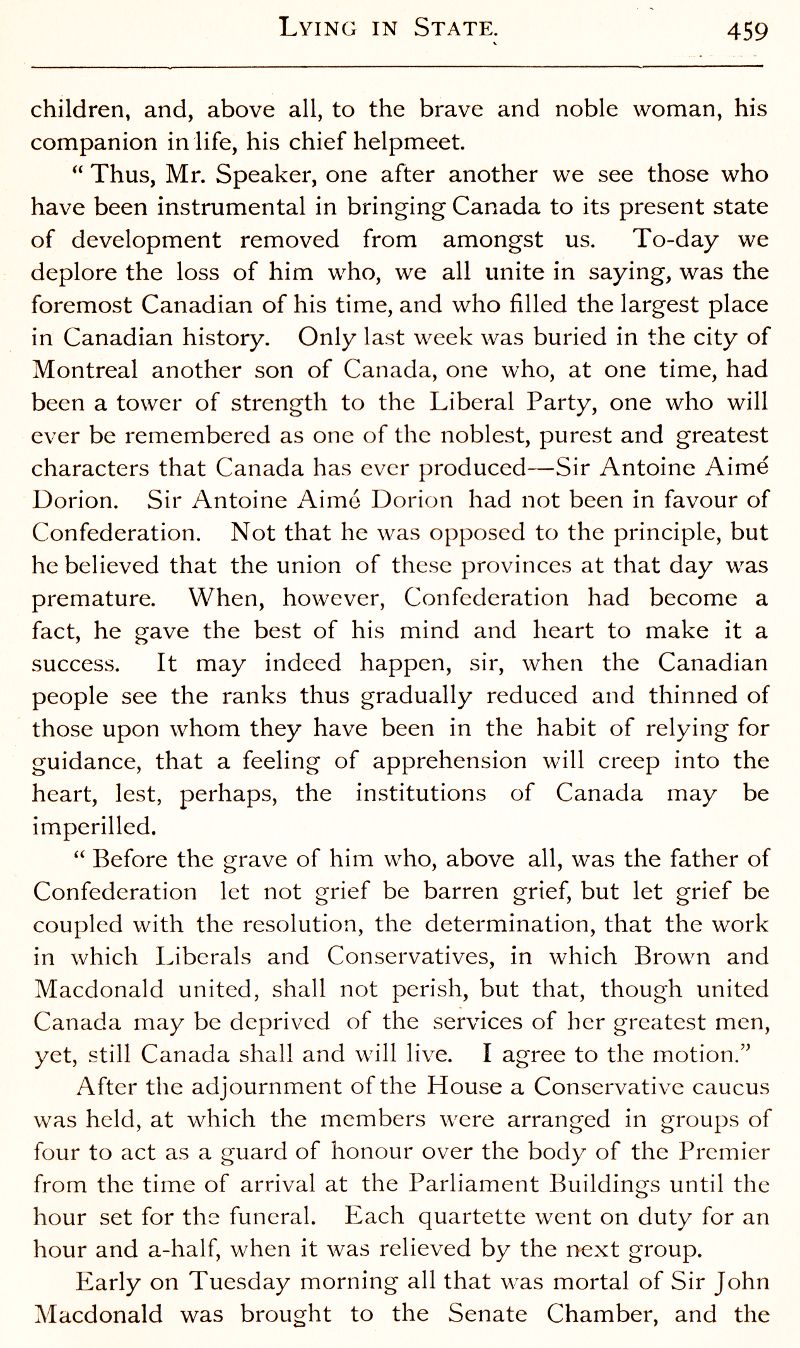 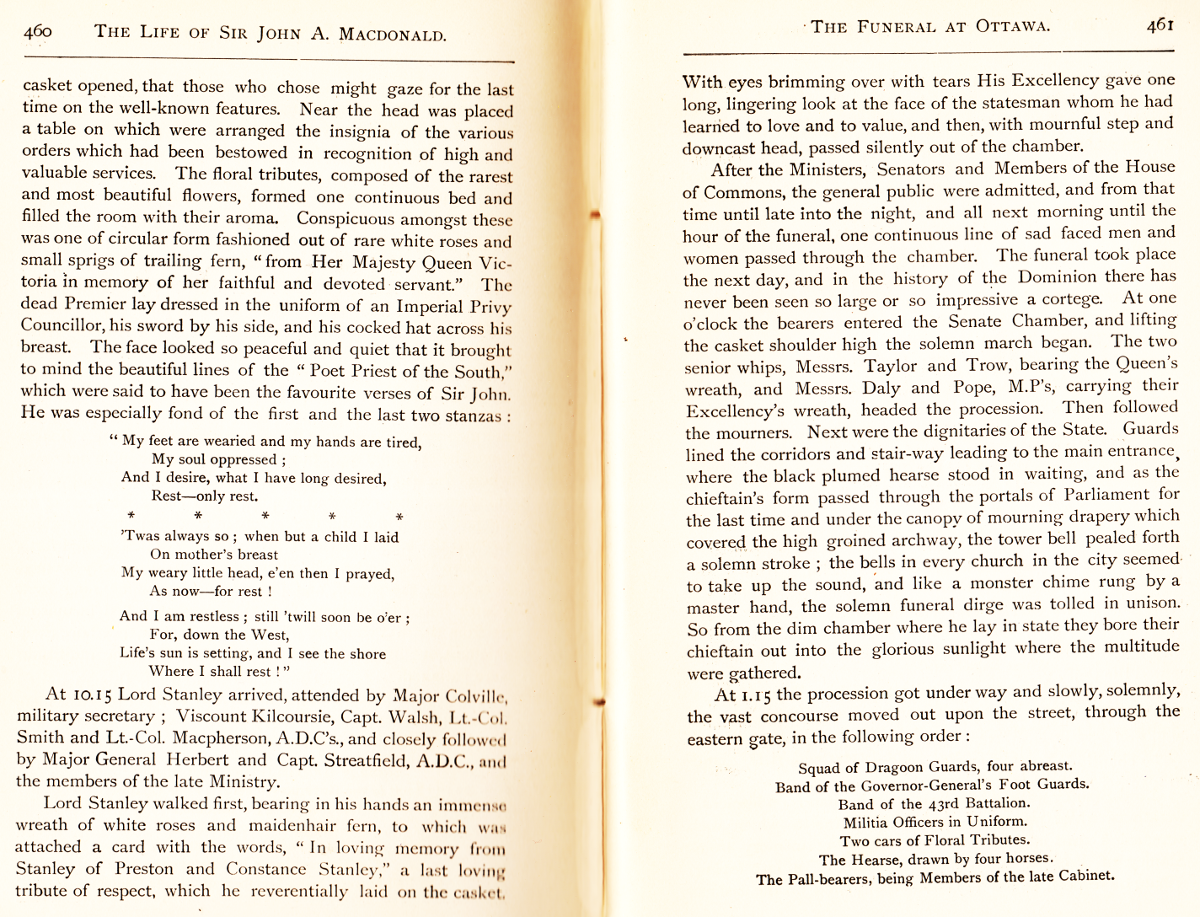 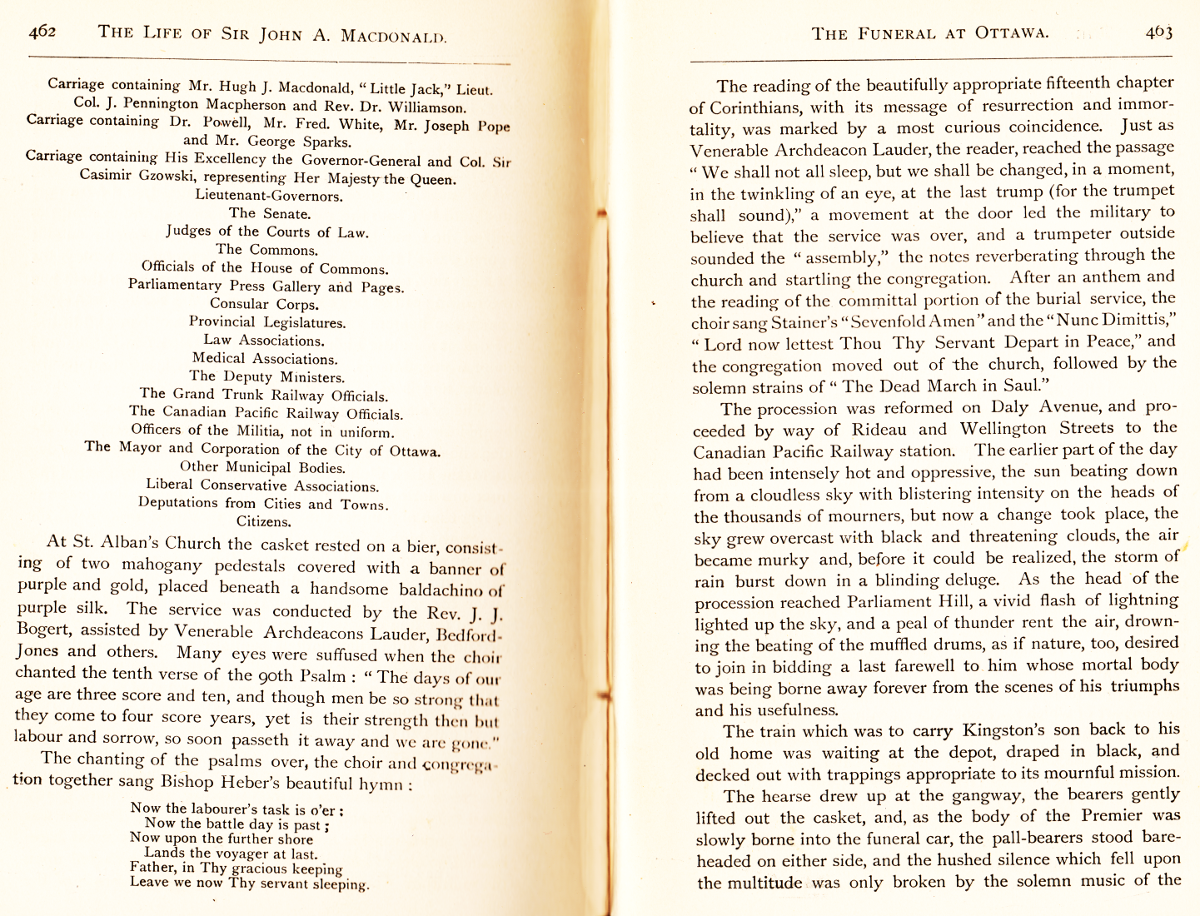 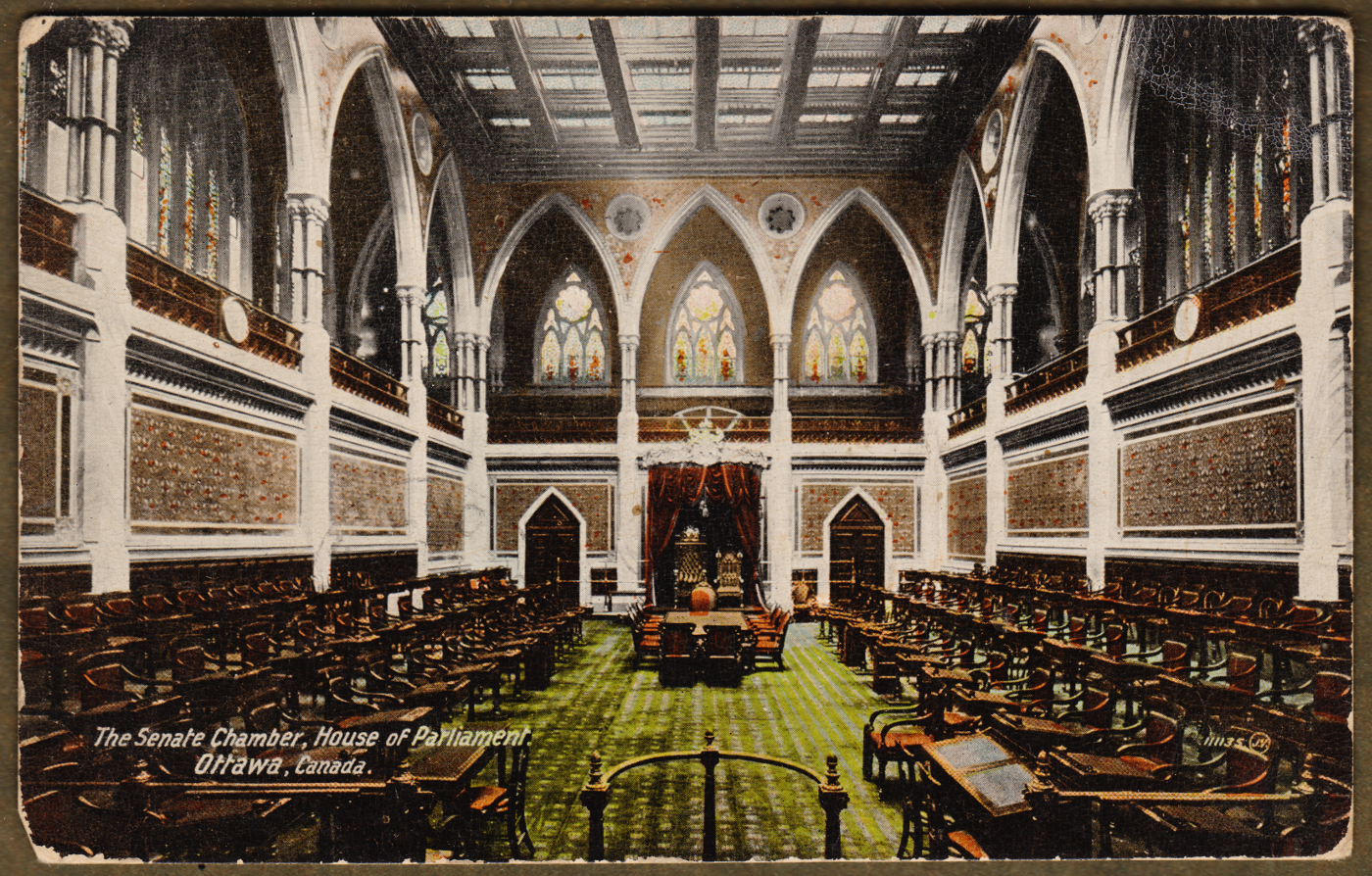 The Senate Chamber in the old Parliament Buildings (burned in 1916) - also known today as 'The Red Chamber'.
... is seems likely the British artists who colourized the Valentine Company's postcard did not know this. 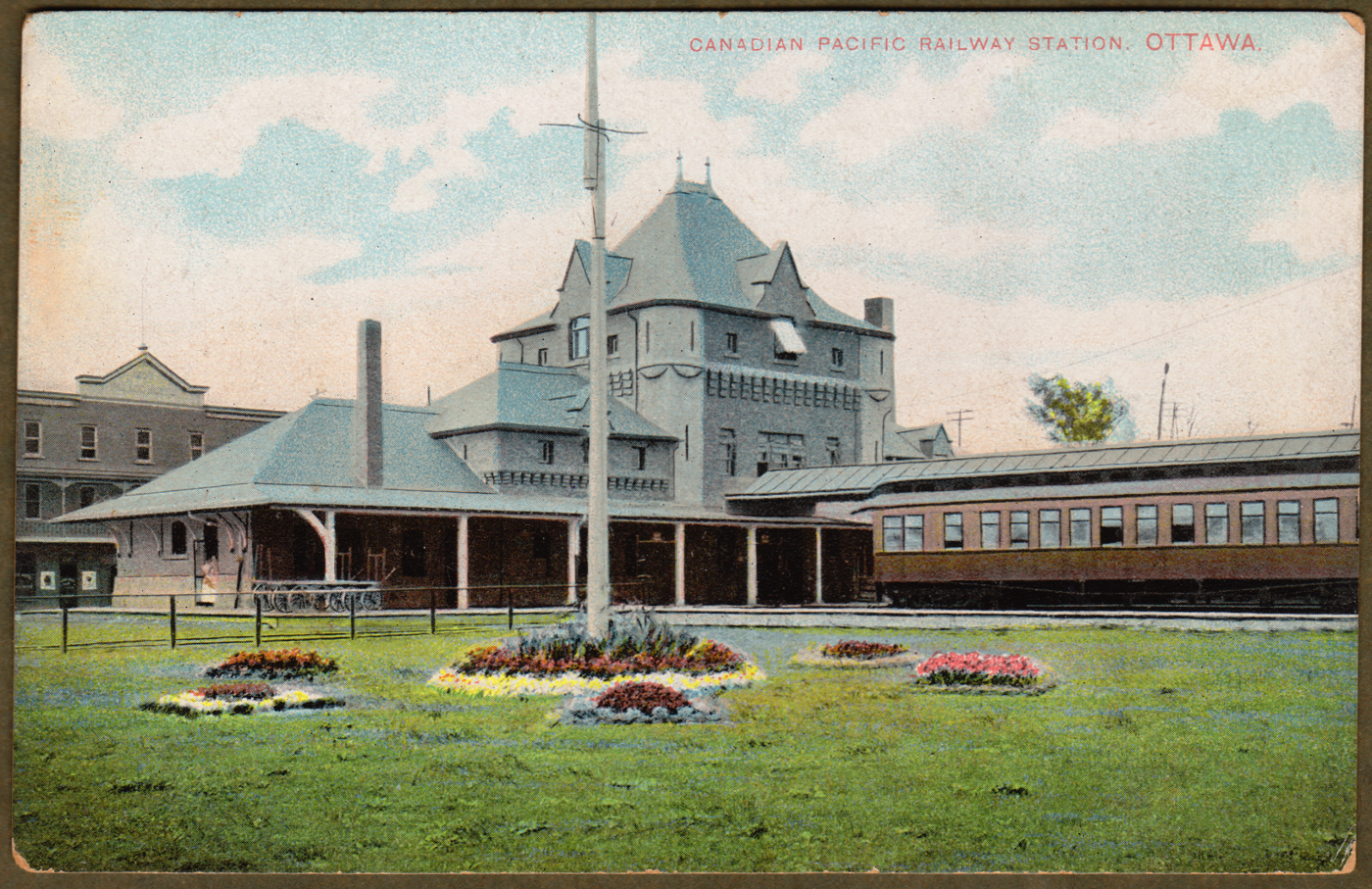 The CPR Ottawa station circa 1900. 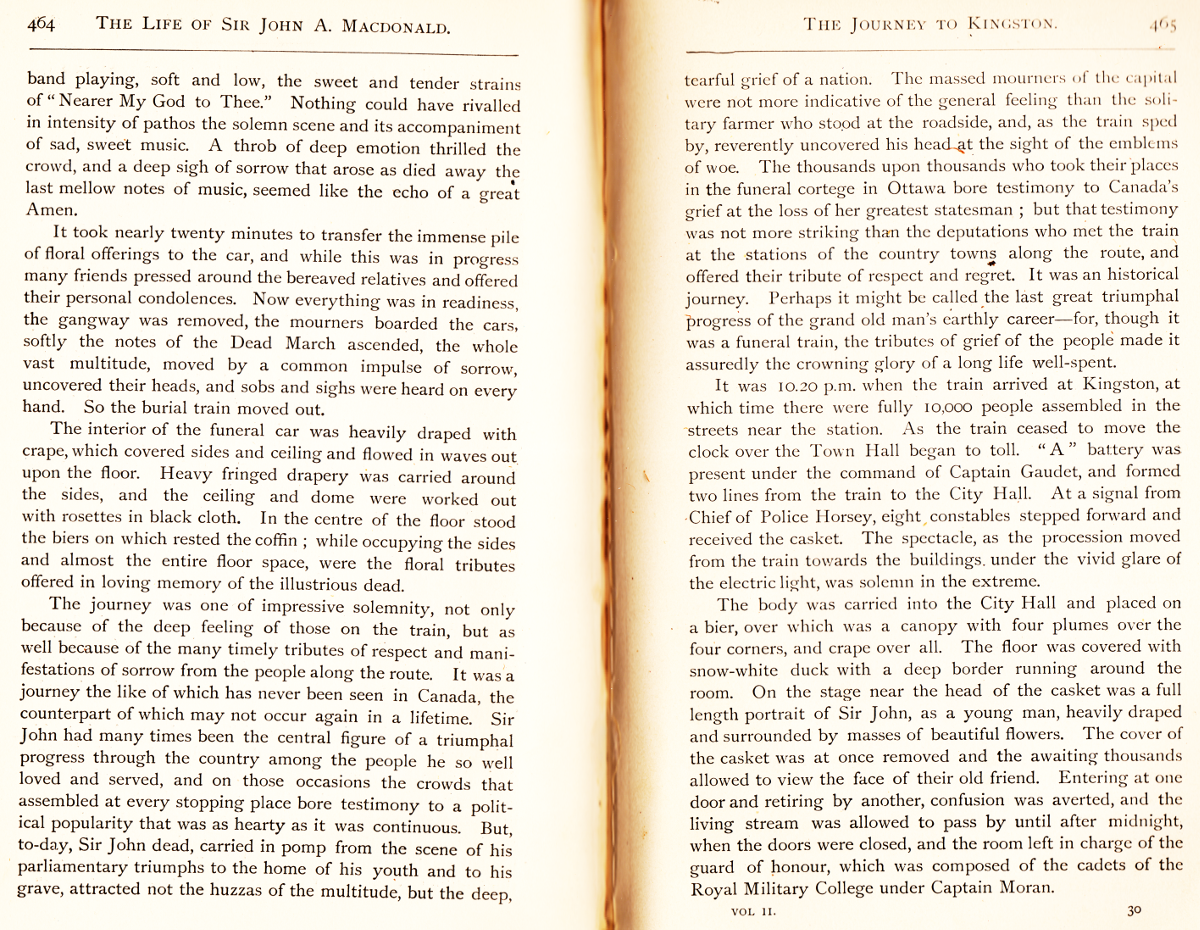 ... after the following details on the train and Kingston ...

According to In Search of the K&P, the consist and passengers were as follows:

(The Montreal Gazette of June 12, 1891 reported the train was 14 cars. Clearly, there is plenty of opportunity for further research on the exact details of the train, its consist and its occupants.)

At the last place, where the train reached Kingston and Pembroke rails, a K&P engine was added to lead - making the train a double-header. The train proceeded very slowly on the last section of its route.

At Harrowsmith, the Funeral Car was marshaled directly behind the motive power. When the train arrived at the K&P station at Kingston, this would have spotted it directly across from Kingston's city hall. 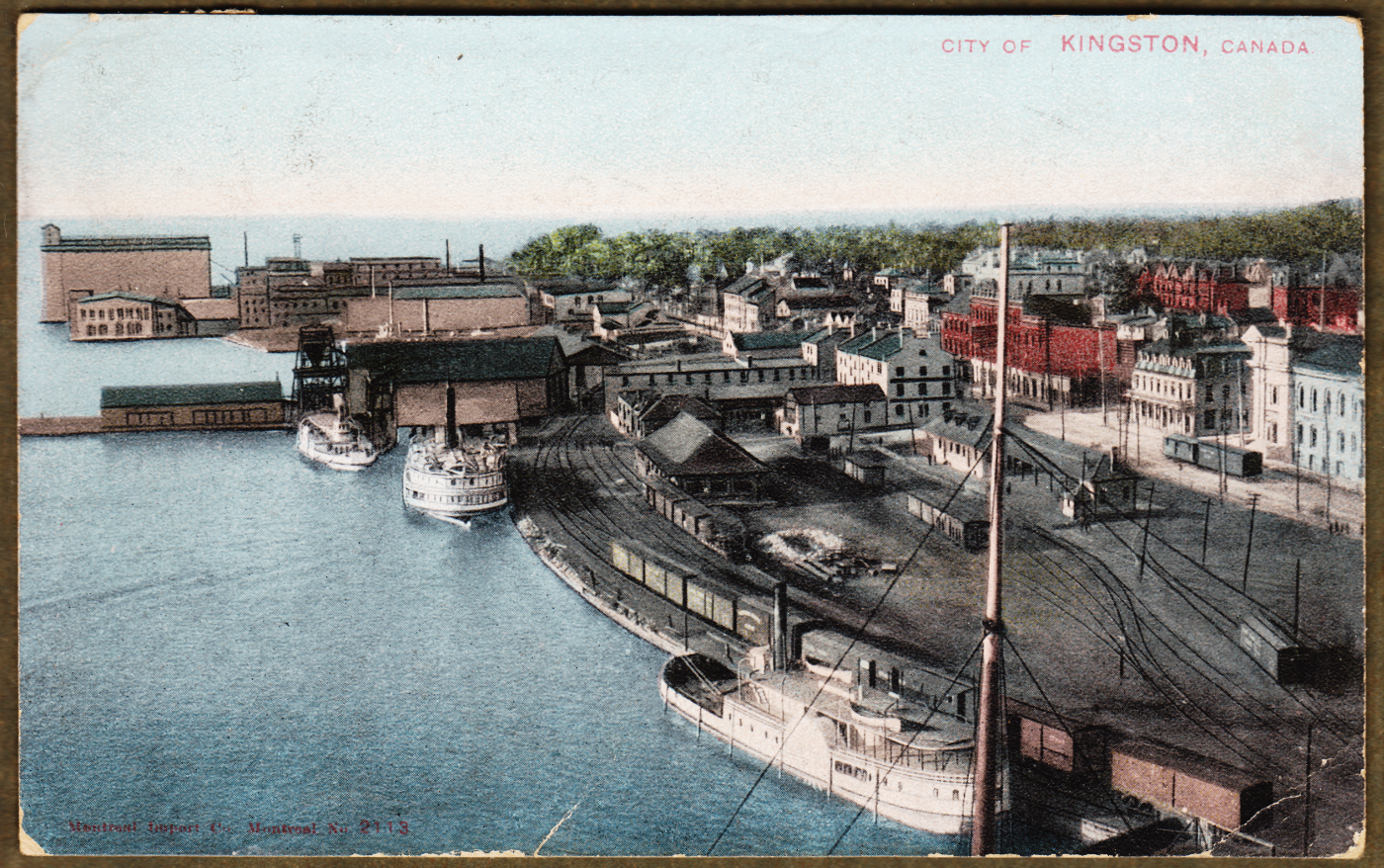 In the circa 1900 view above, the Grand Trunk tracks leading to the 'Inner Station' and the locomotive works are nearest the water. The Kingston and Pembroke station is directly behind the ship's mast.  Notice the K&P platform shelter which is attached to the freight shed.

Part of the city hall building is seen at the right edge of the photo. 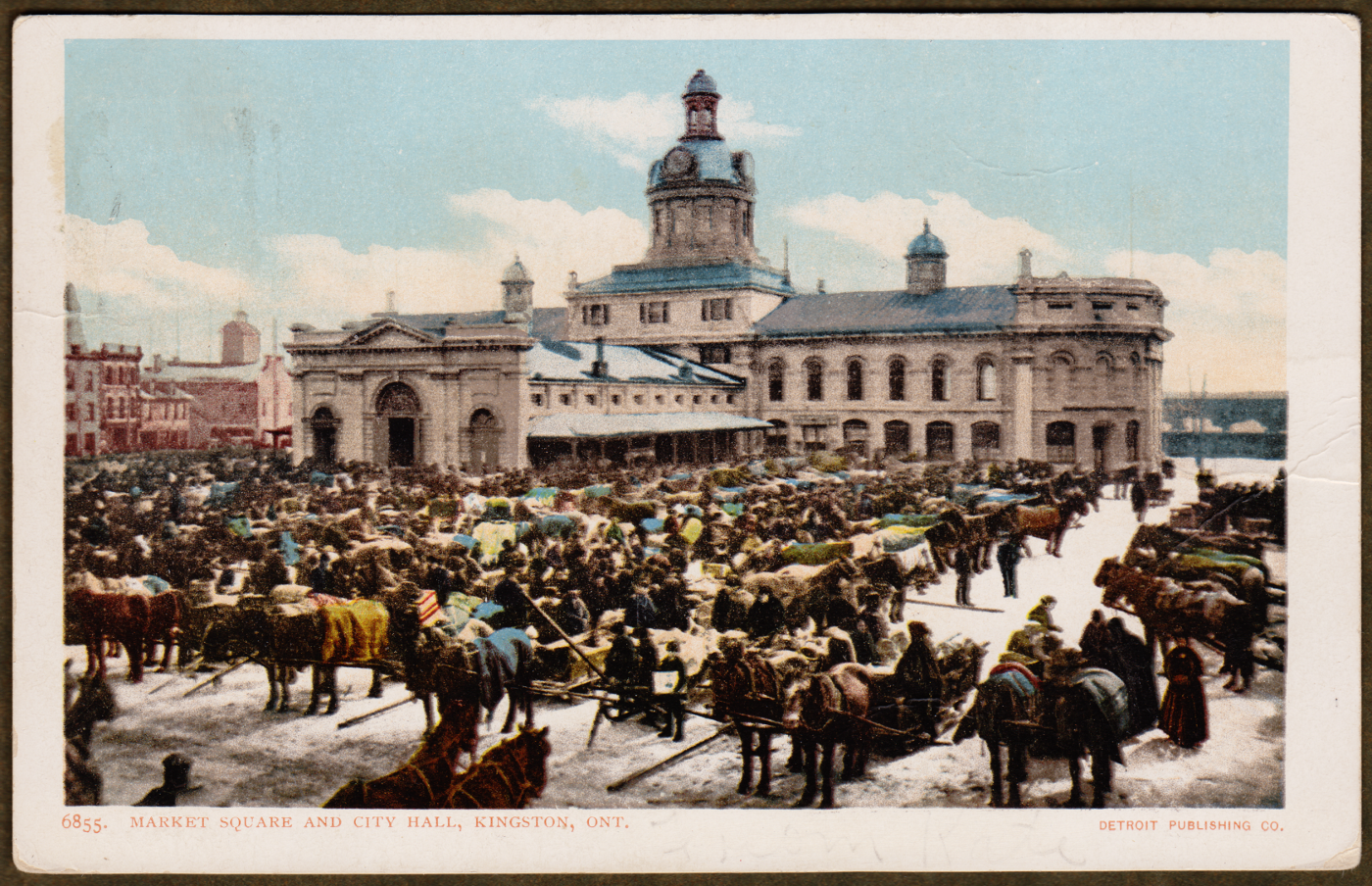 The back of City Hall on market day.
The waterfront trackage and the K&P station are on the far side.

Above: The waterfront side of City Hall.

On the day of the interment. Viewed from City Hall, the freight shed and part of the platform shelter are seen again - this time from the opposite side, with the harbour beyond. Coaches are stored on the K&P (foreground) and Grand Trunk tracks (background) ... the funeral has resulted in an influx of passenger equipment onto the waterfront trackage. 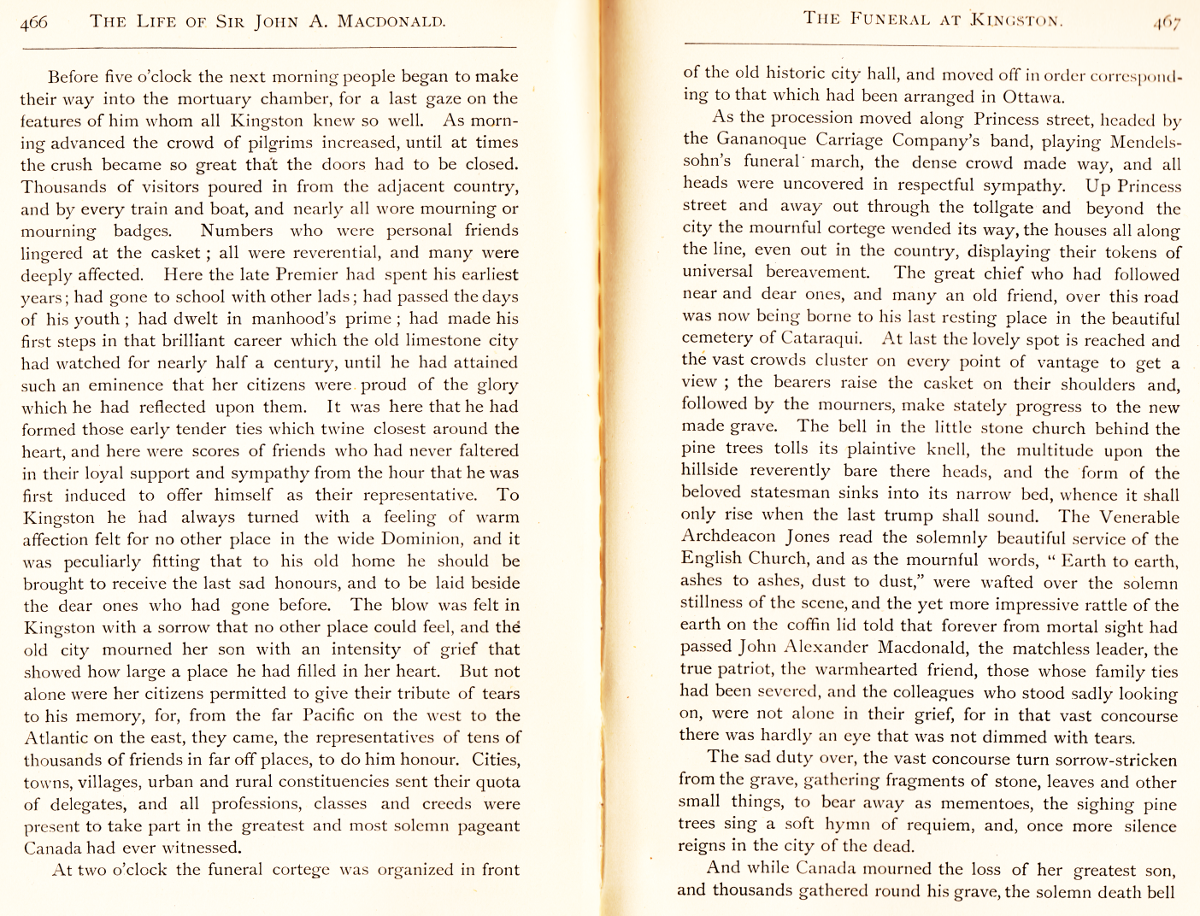 The last six pages of the book describe the response in Britain ... 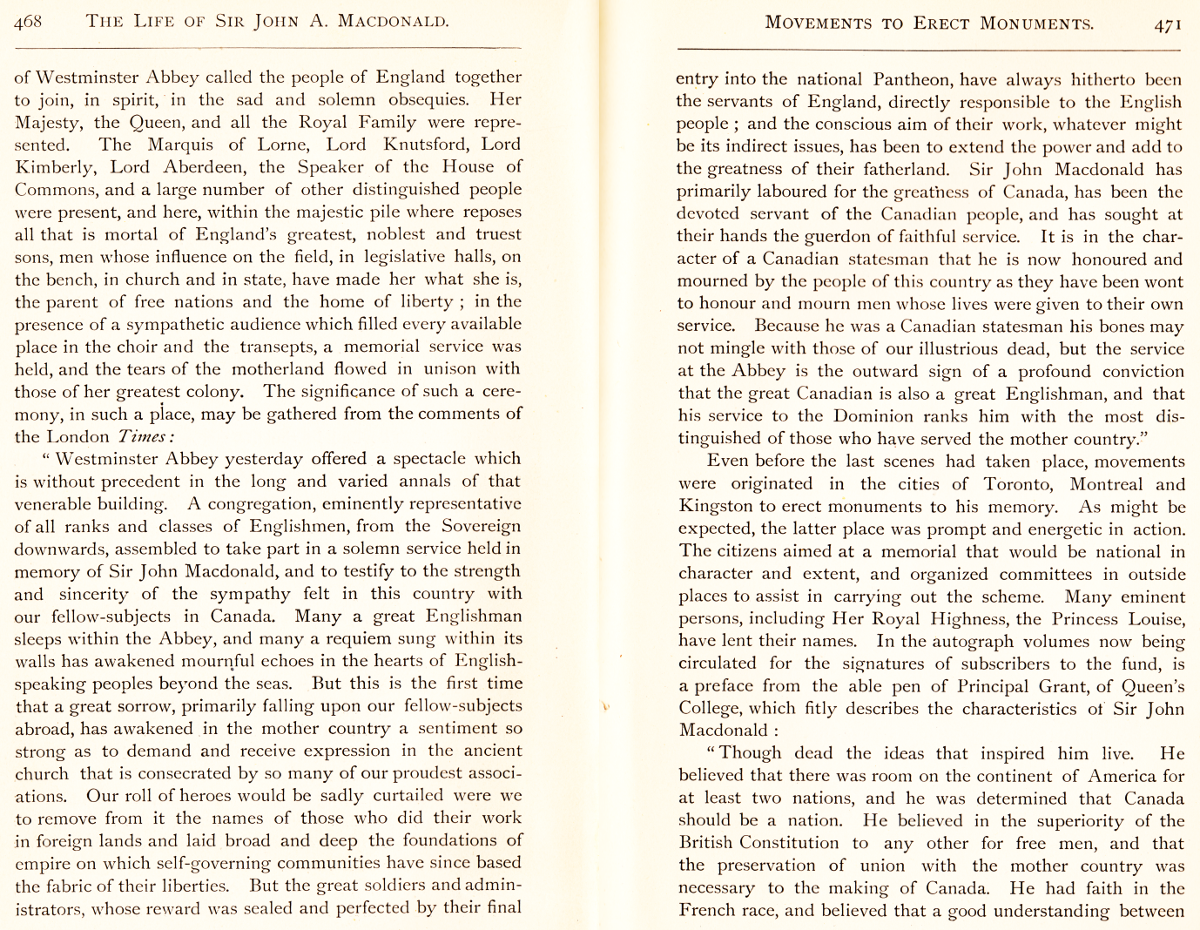 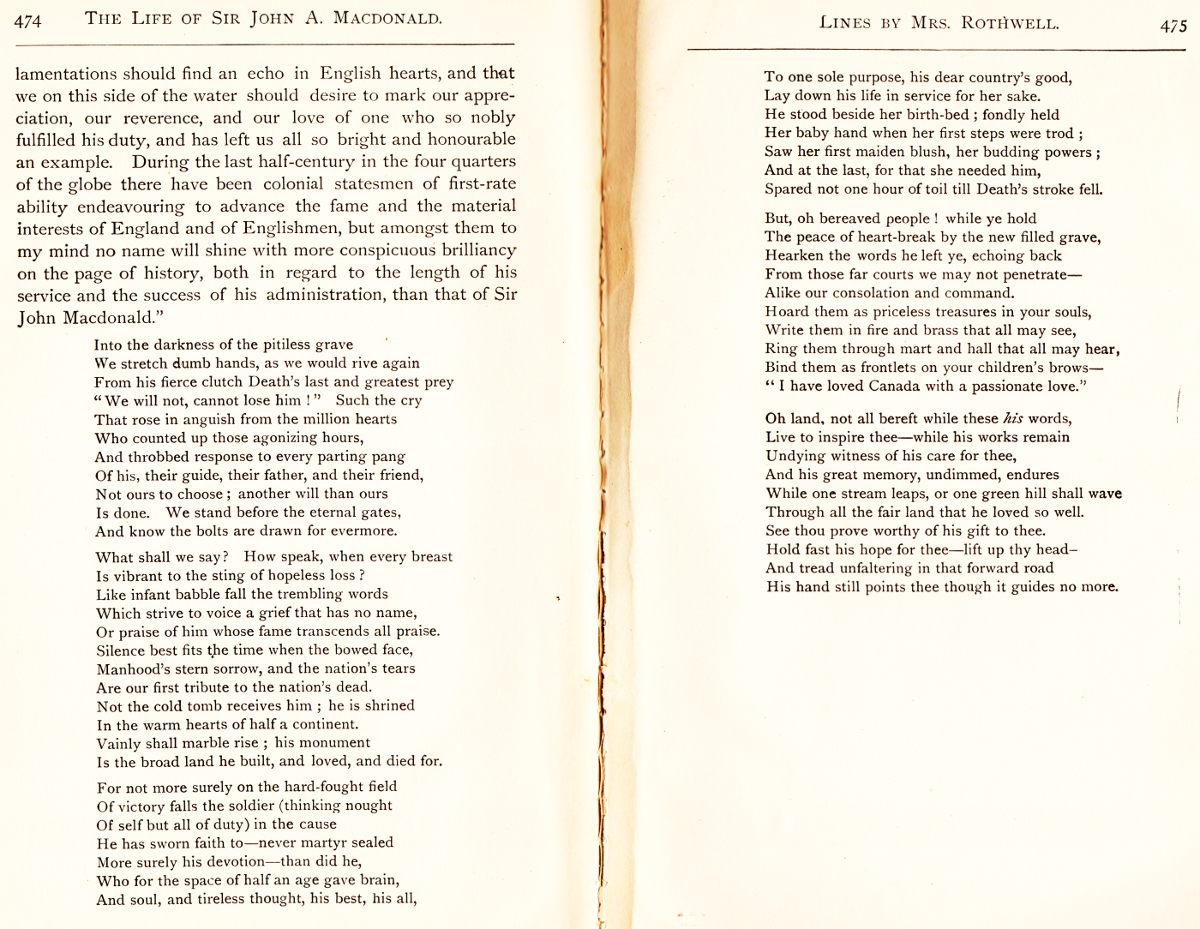