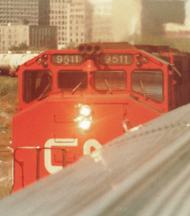 When one listens to a scanner all night via an earplug, there is little sleep.

In the black wilderness white lights flash as they pass, and Spooky Mr Rogers jars you awake to announce 'his' location, your axle count and his verdict. Human voices on each end of The Canadian repeat only the last data to each other. Unlike Mr Rogers: when called on, they know how to correctly pronounce the name of the subdivision.

Later, in slowing undulating tones, the train sings itself to a stop. All is dark and still. Sleepless passengers finally doze off.

Like dawn, light glows gently outside the window, then suddenly becomes blindingly bright ...

Twelve thousand horses scream you out of your nap - in four distinct bursts of sound.
Protesting steel rattles, hammers or shrieks by your window - sliding down in pitch as it goes.

You hear sputtering like a garden tiller as more blinding white light flashes by, then slowly dims.

Your crew announces to the freight that all is well with their train and they acknowledge.

Finally, all is blackness and silence.

Moments later, the headend reports 'Medium Clear for No 1'.
The tailend trainman repeats the words.

A gentle tug, and your train is underway again. 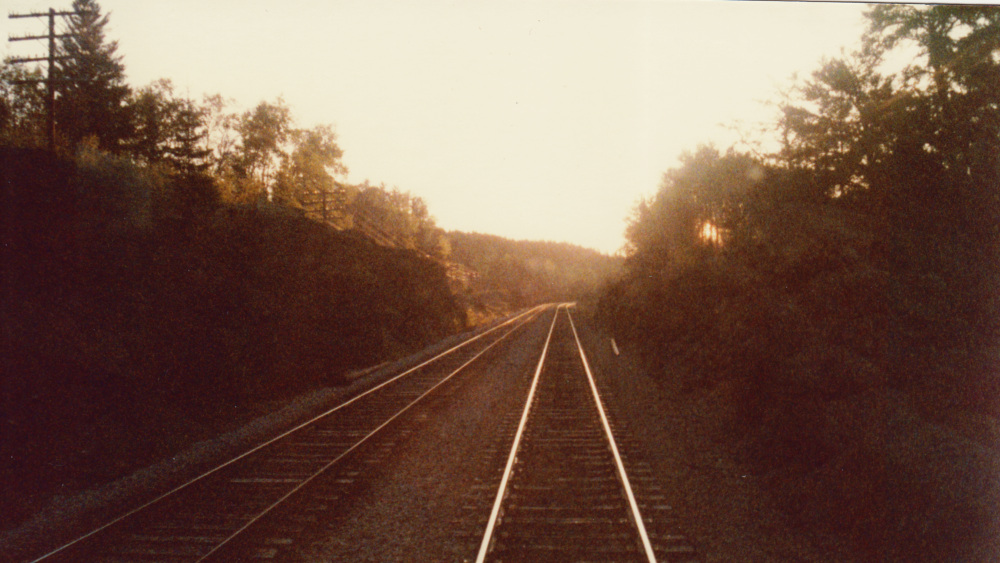 Starting at the dawn of a new day on the way across Canada, the Park car was the destination of choice. My spouse was content to sleep some more. The complication of a scanner was unnecessary in the last car ... the railway radio exchanges were usually provided at no charge for all passengers in this area via the trainman's portable.

Up in the leading end of the dome, the young tailend trainman and the conductor were in conversation. Spotting a CP Rail unit leading, I made an effort to identify it with the zoom lens - the crew members were now silent and watching me. There were probably no other passengers around. I remarked on the lead unit and the conductor told me it was a freight engine of such-and-such horsepower. I asked and he gave me its road number.

The current Trackside Guide came out of my camera bag, and the conductor seemed to lunge at me. What type of reference, would a tourist in his late-twenties have, which would provide detail about the Company's capital equipment? If you think about it that way, 'we' enthusiasts are an odd lot.

Things ended happily though. He instructed the trainman to set me up in the vestibule of the Park car.

Later, the trainman, with initials R.S., commented about wanting to double-out a few times so he could afford a new mainsail. He explained that Kenora has the finest freshwater sailing in Canada. Coming from Kingston, I chose not to bite the hand that opened the Dutch door for me.

On the subject of trackside detectors, I don't actually remember if there were many 'talking' detectors back in 1984. Certainly, we had the visual readout three digit detectors the following morning in southern Alberta.

These photos of  'a day on the train' will follow with much less commentary. 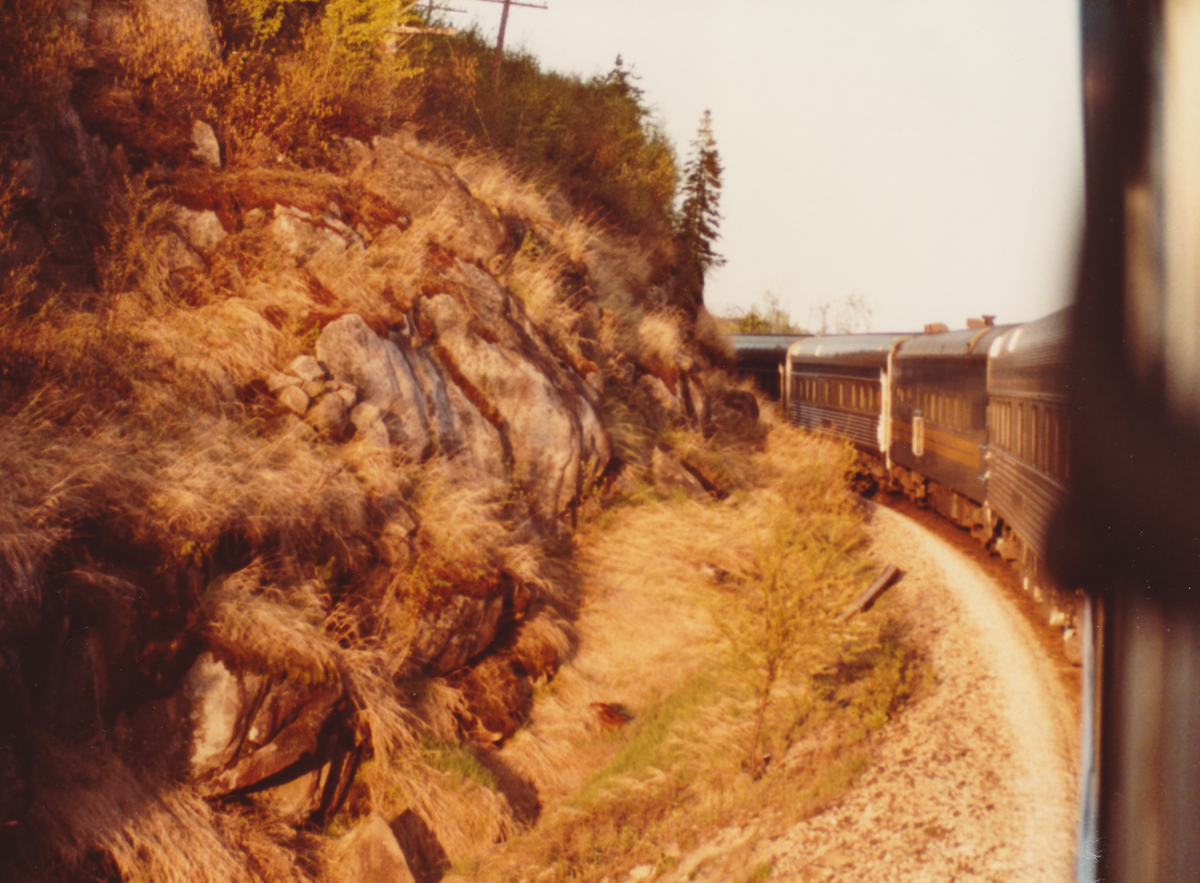 I left the upper door latch smudge in this posted photo in case it brings back memories for some readers. 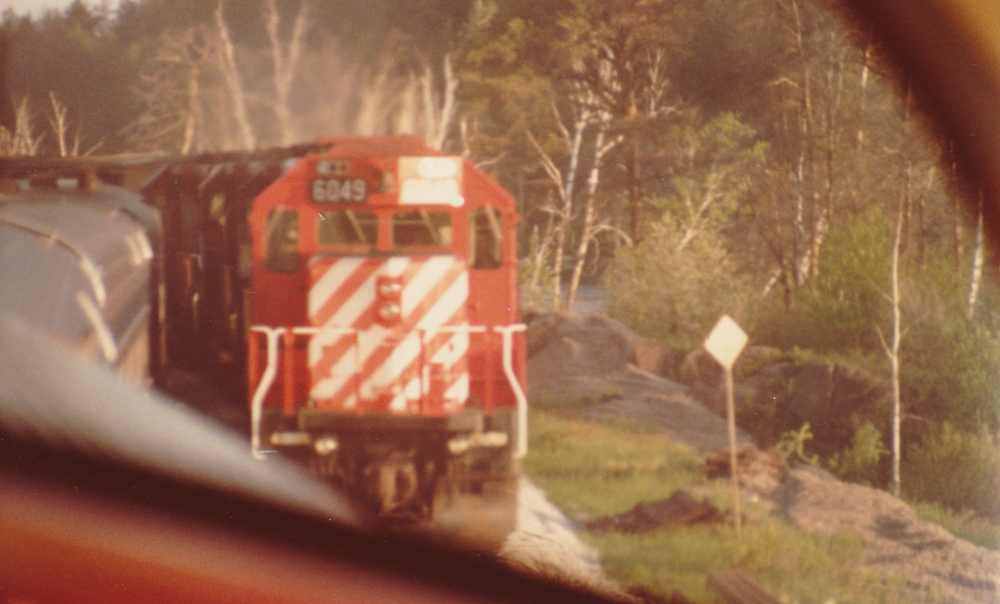 One of the freights from the overnight procession.
Undamaged dome corner windows were great when you had them. 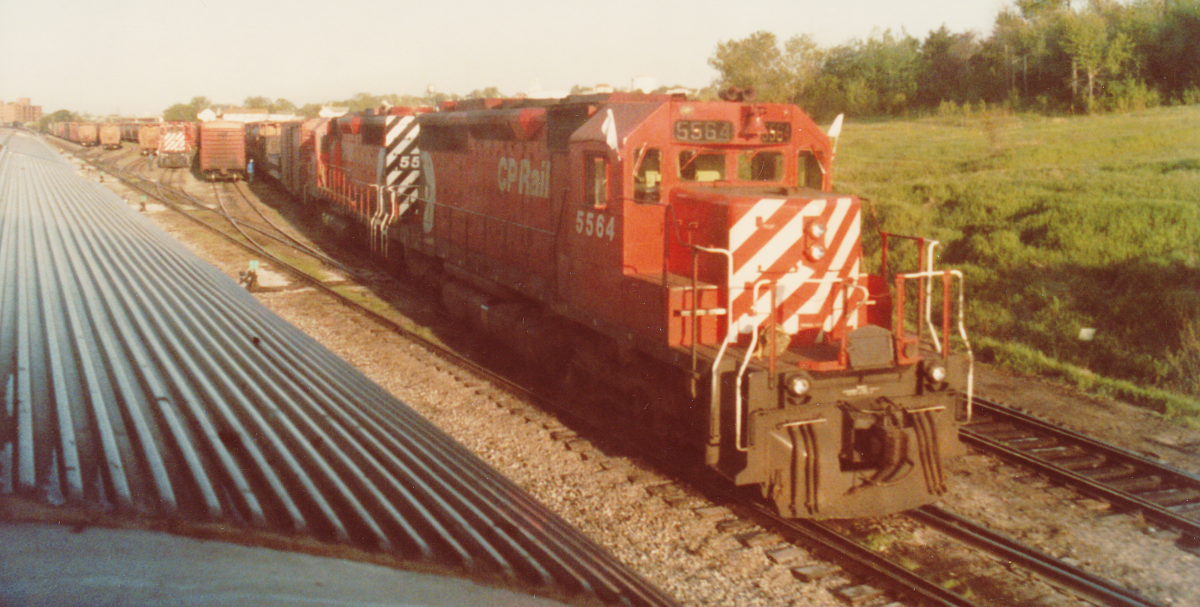 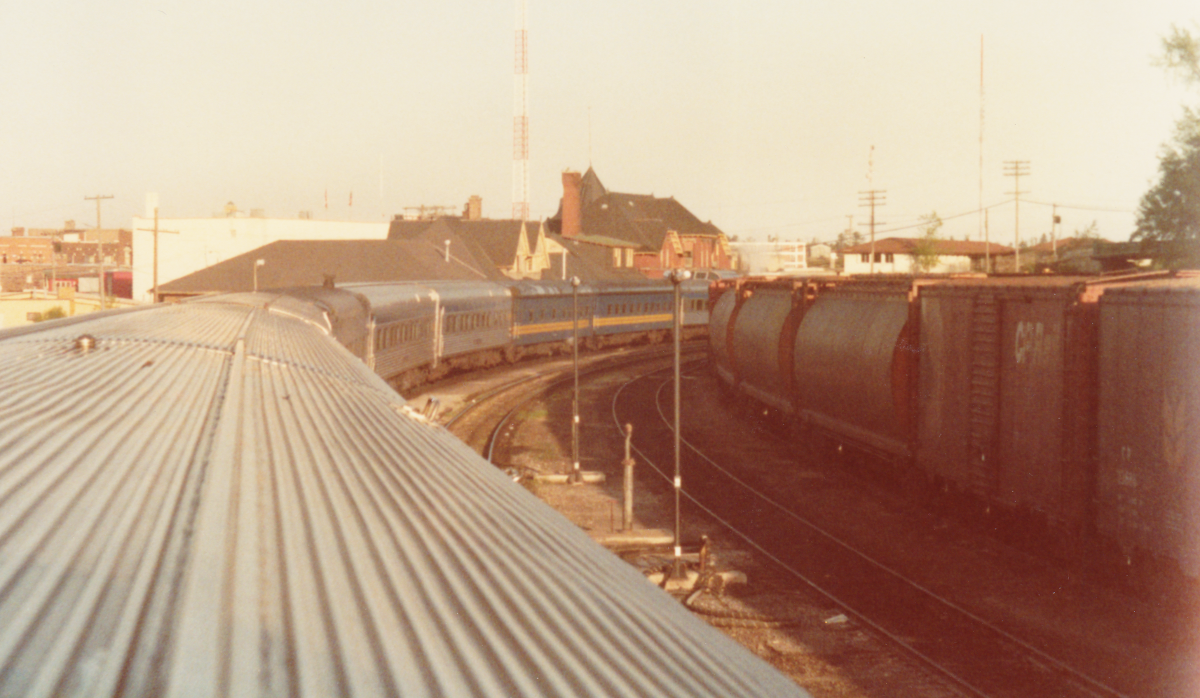 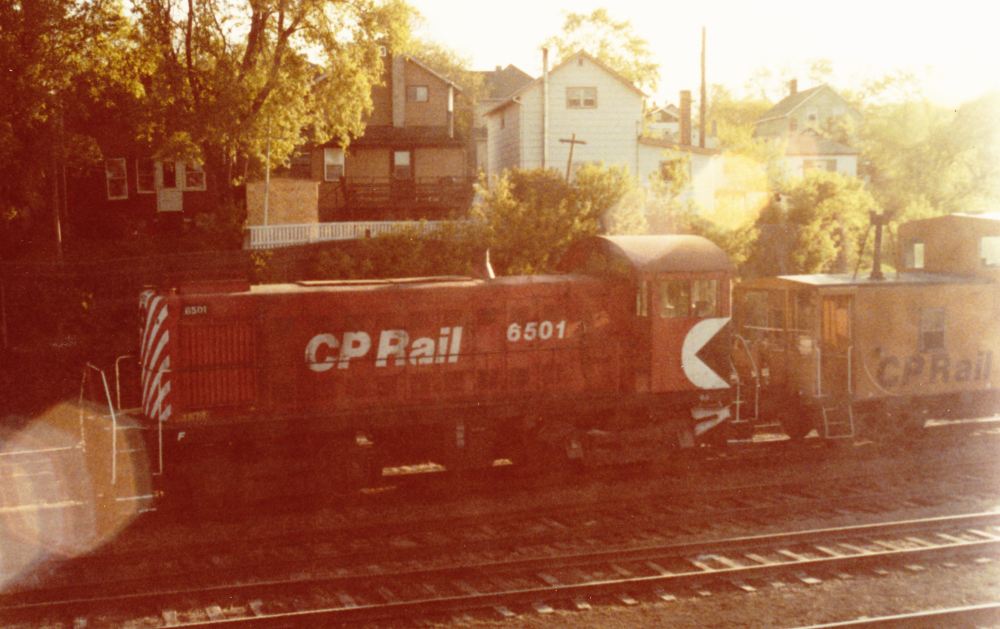 The 6501 was built in 1951 and it was gone by 1986 (we are a strange bunch).
This poor photo is displayed because I like the illuminated number plate design.

[After posting. From Eric:
Brian Schuff indicates that the 6501 was at the end of the road
and for scrapping at Weston Shops in September 1984.]

[After posting. From Eric:
Brian Schuff indicates the flyover was removed in late September 1984
and the new alignment was in place in October 1984.] 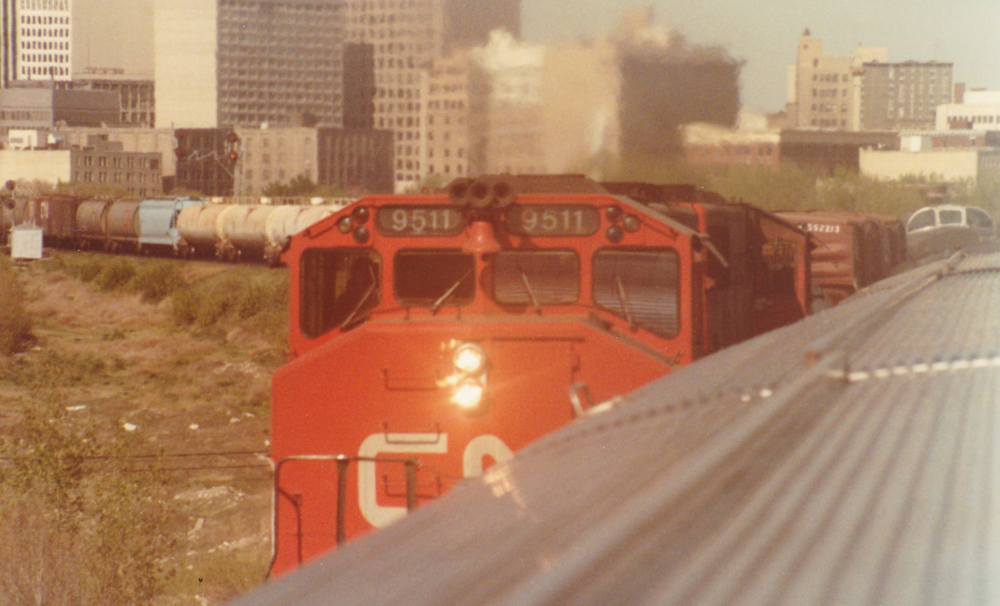 I think that Restricting signal is for us. 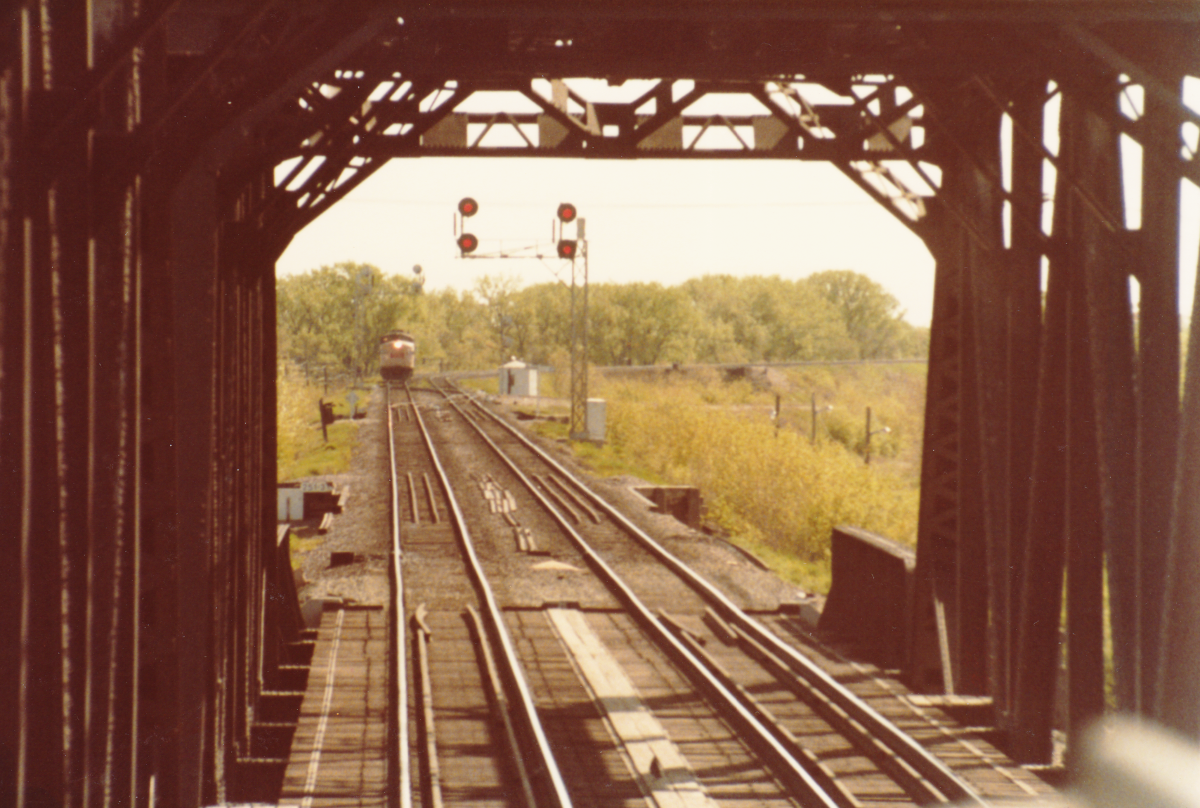 ... a number of things will change at Winnpeg. 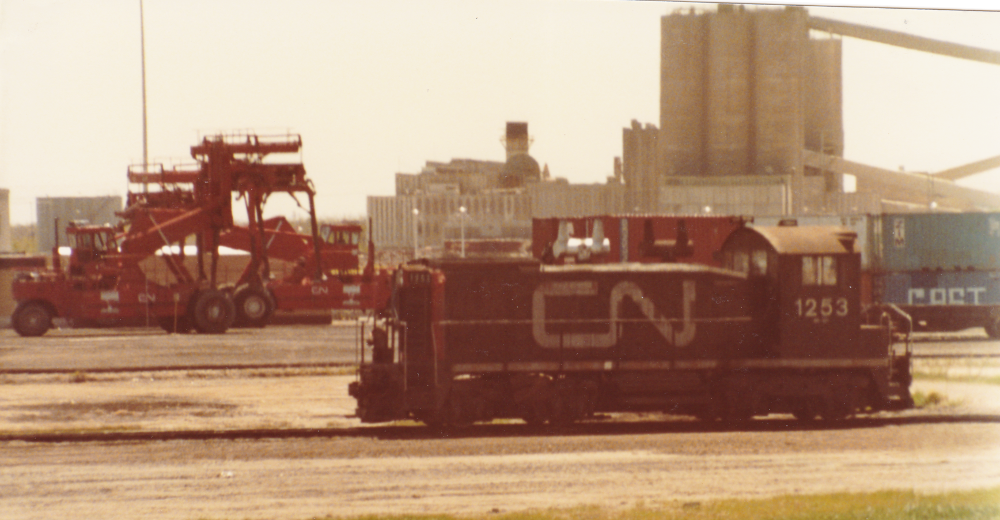 Running on the CNR west of Winnipeg.
The foreshortened gondola is full of Pandrol clips. 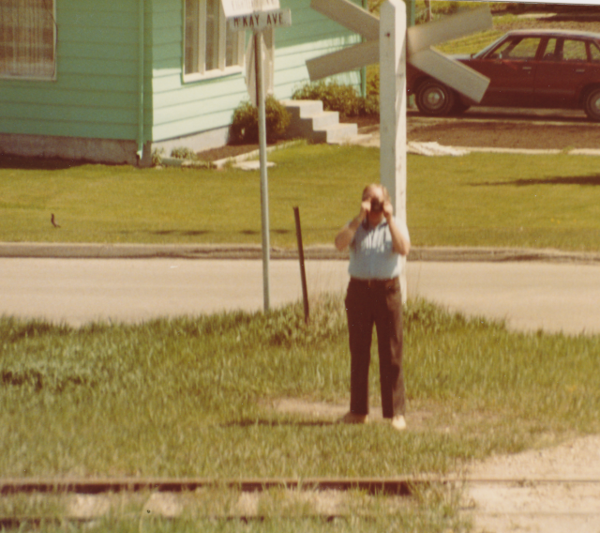 We have moved onto the CPR Carberry Subdivision after using the former CNR station at Portage la Prairie.

My aunt and uncle at Portage were experienced train-tracing veterans.
They have come to the station to see us roll by.
Here, my Uncle Wilf and I photograph each other.
He is at 18th St NW and McKay Ave 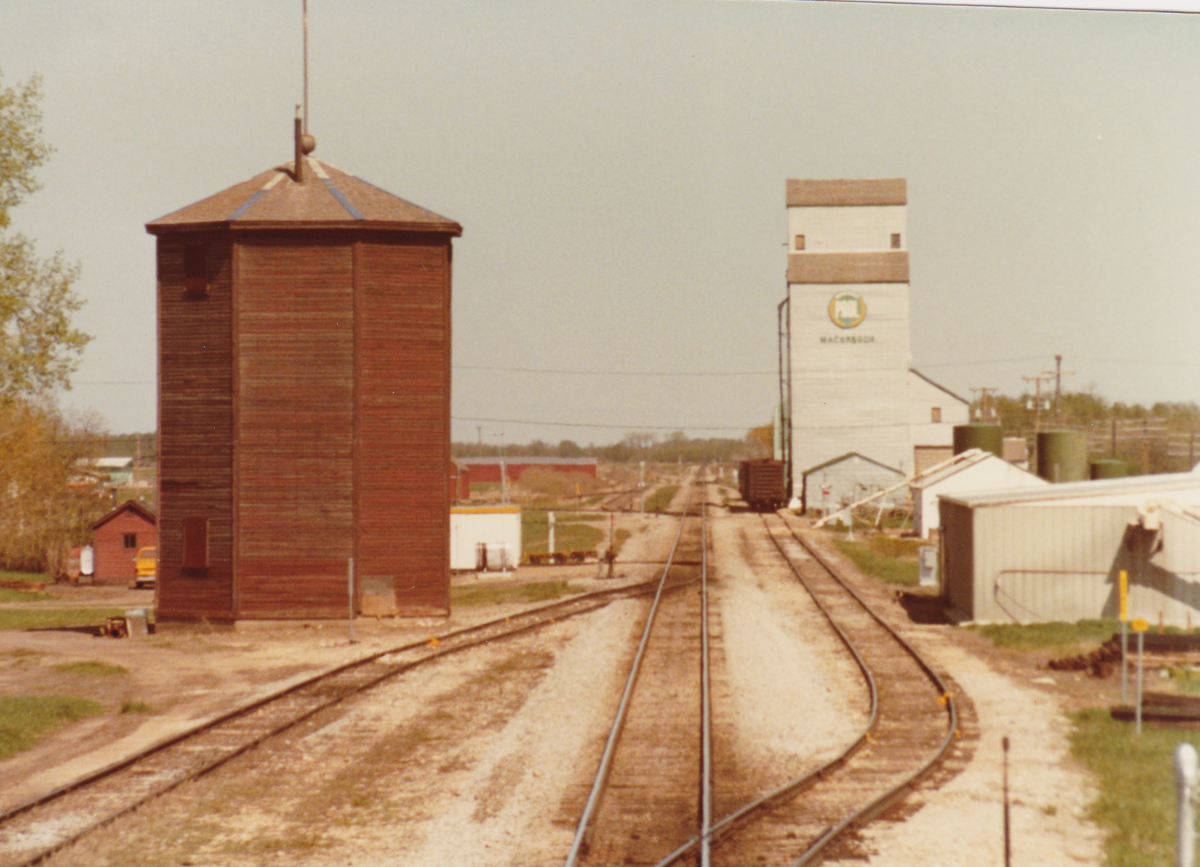 MacGregor, Manitoba.
There is a junction with the Varcoe Subdivision here.

[After posting. From Eric:
Brian Schuff indicates that the water tank was demolished by 1985-86.
At that point, only the tanks at Glenboro, Binscarth and Whitemouth were left.]

Getting out of MacGregor. I'm not entirely sure about No 2's rear coupler.
Nonetheless, he's taking a Clear signal.
The dome contains few passengers.

Because my old timetable is already open to the right page ...
in 1967, there was double track from Sidney to Austin. 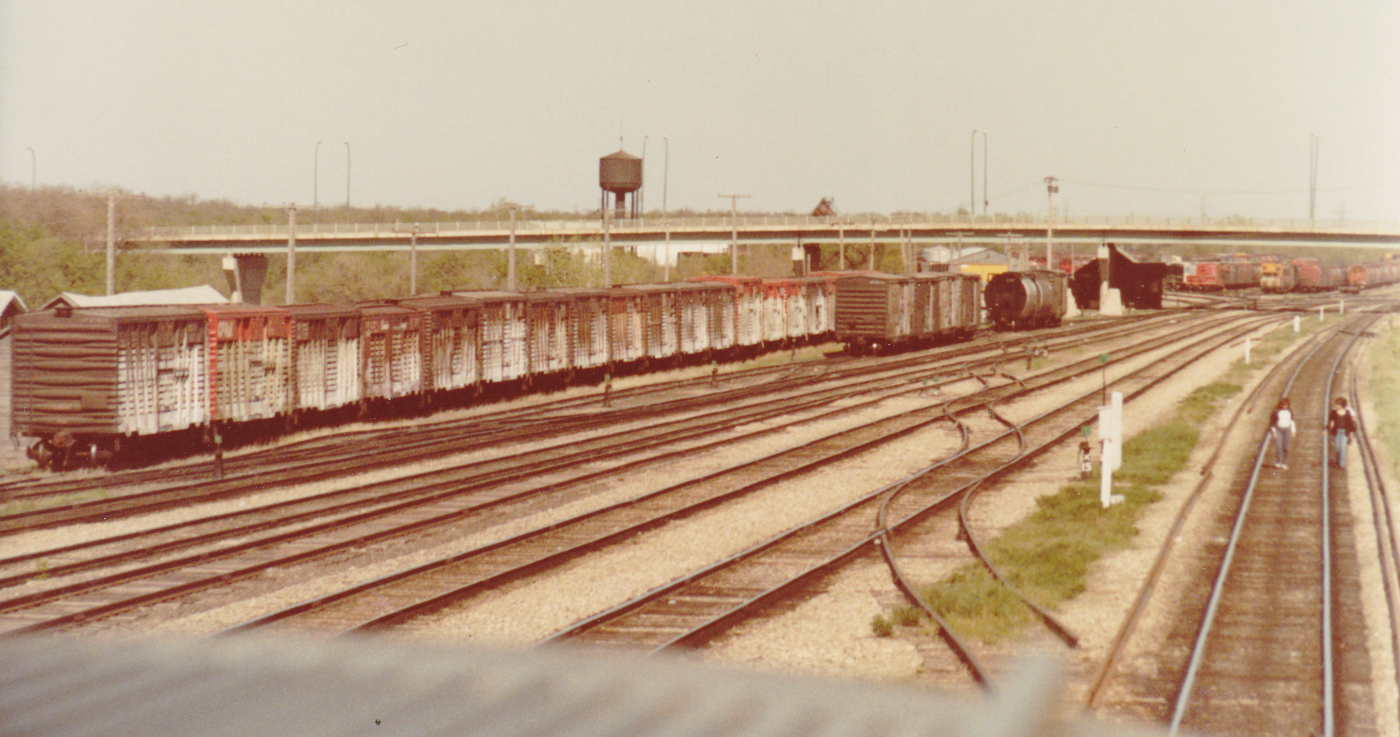 There are interesting artifacts to be seen at Brandon. 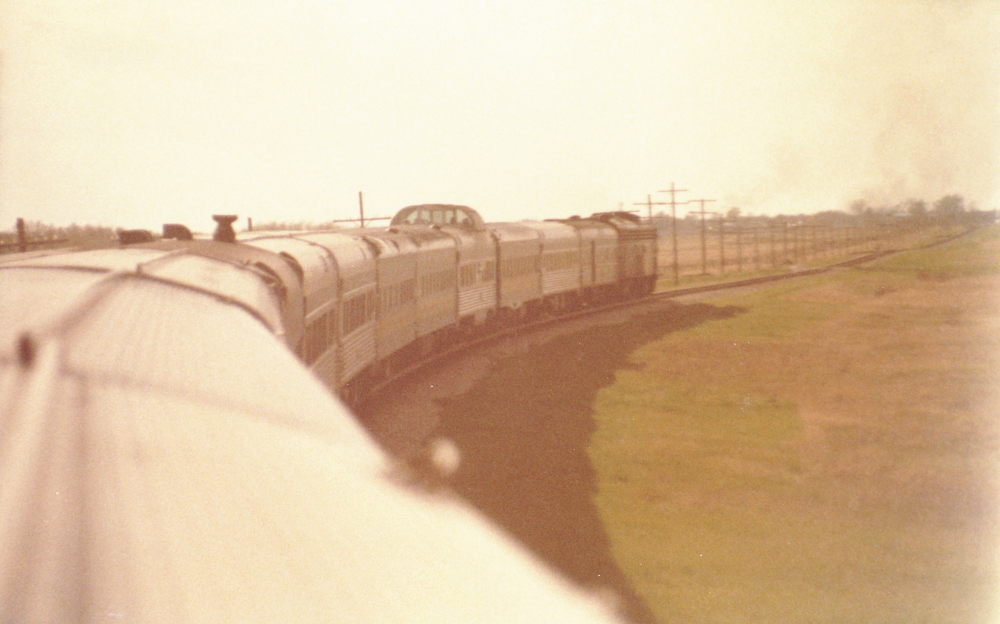 It seems likely we are entering an area of stubble burning. 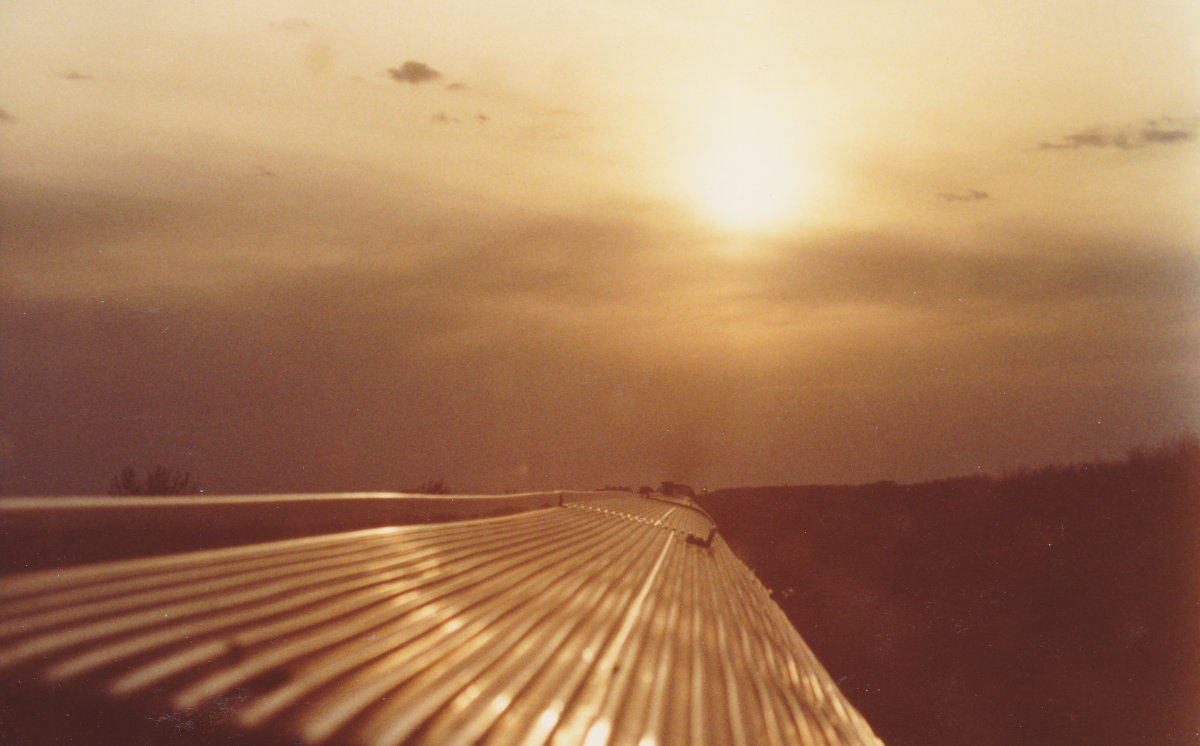 The pigments in some of these prints become strange after three decades or so.
However, it seems we are abruptly entering a new weather system
... somewhere on the Broadview Sub.

Stubble burning and other pollution/refraction effects may be present.
The Clear signal is there as the last photo of the day is taken.
We'll be running fast tonight.