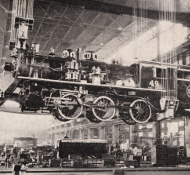 My brother gave me this wonderful little 4 inch by 6 inch booklet. In the railway's own words, it documents the state of many of the CNR's Montreal facilities in the late 1950s.

For people not familiar with the area and its features, and to provide some contemporary atmosphere, I have added a few images from the era described. 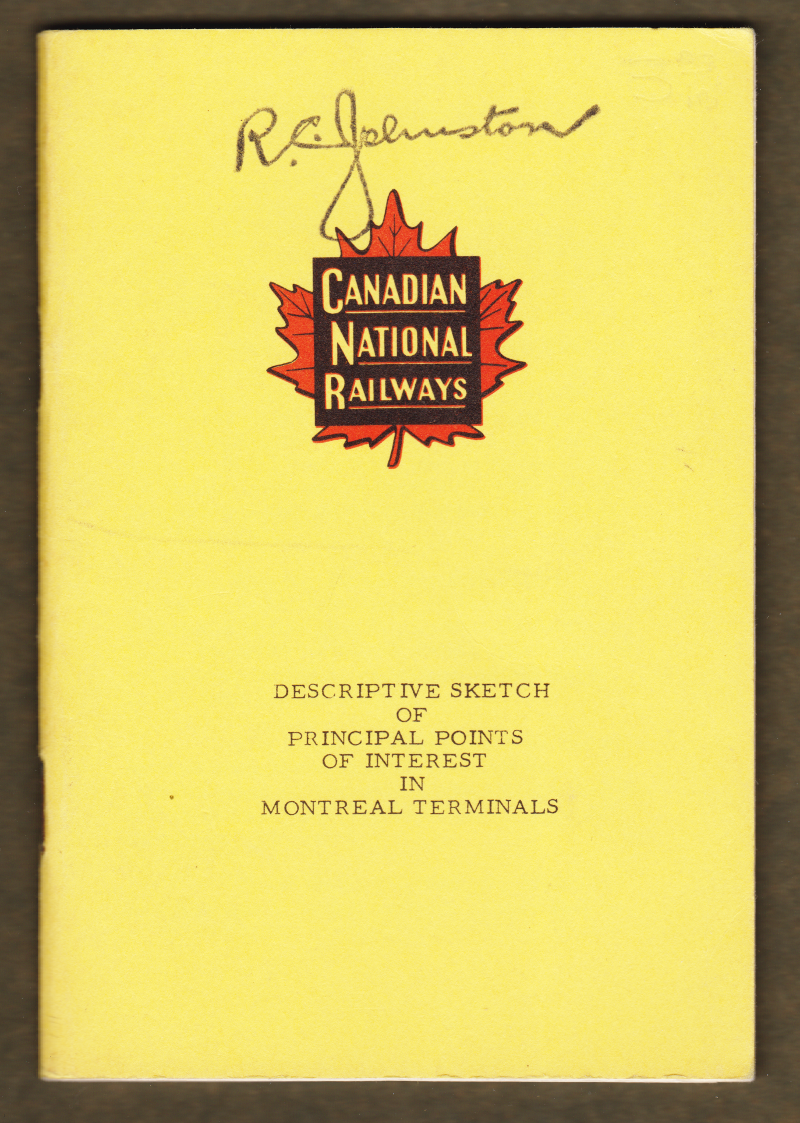 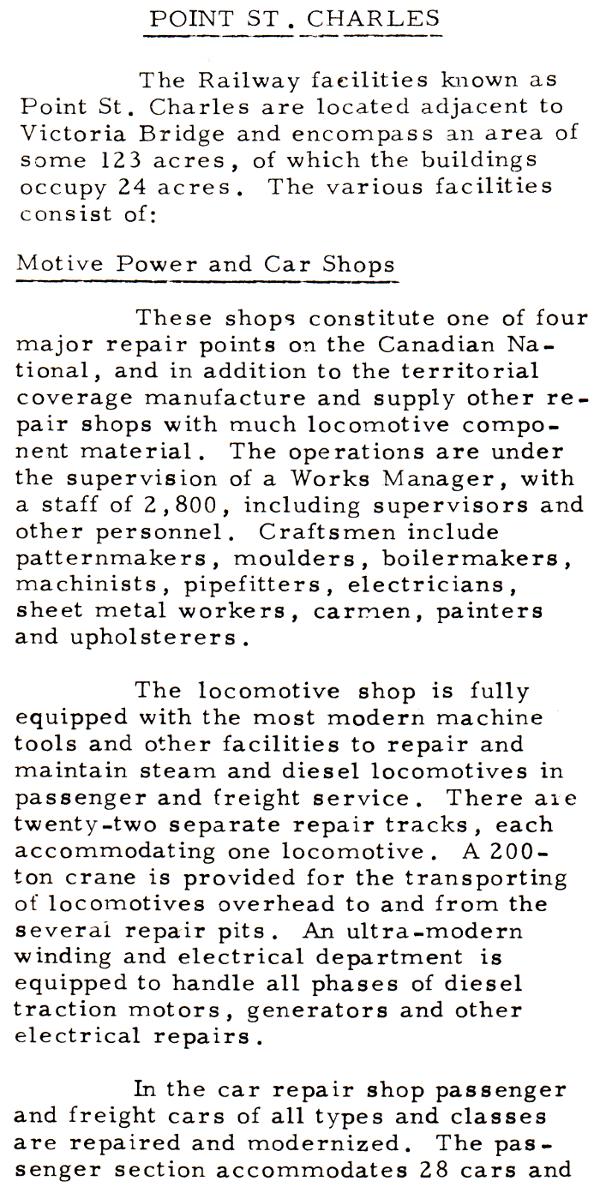 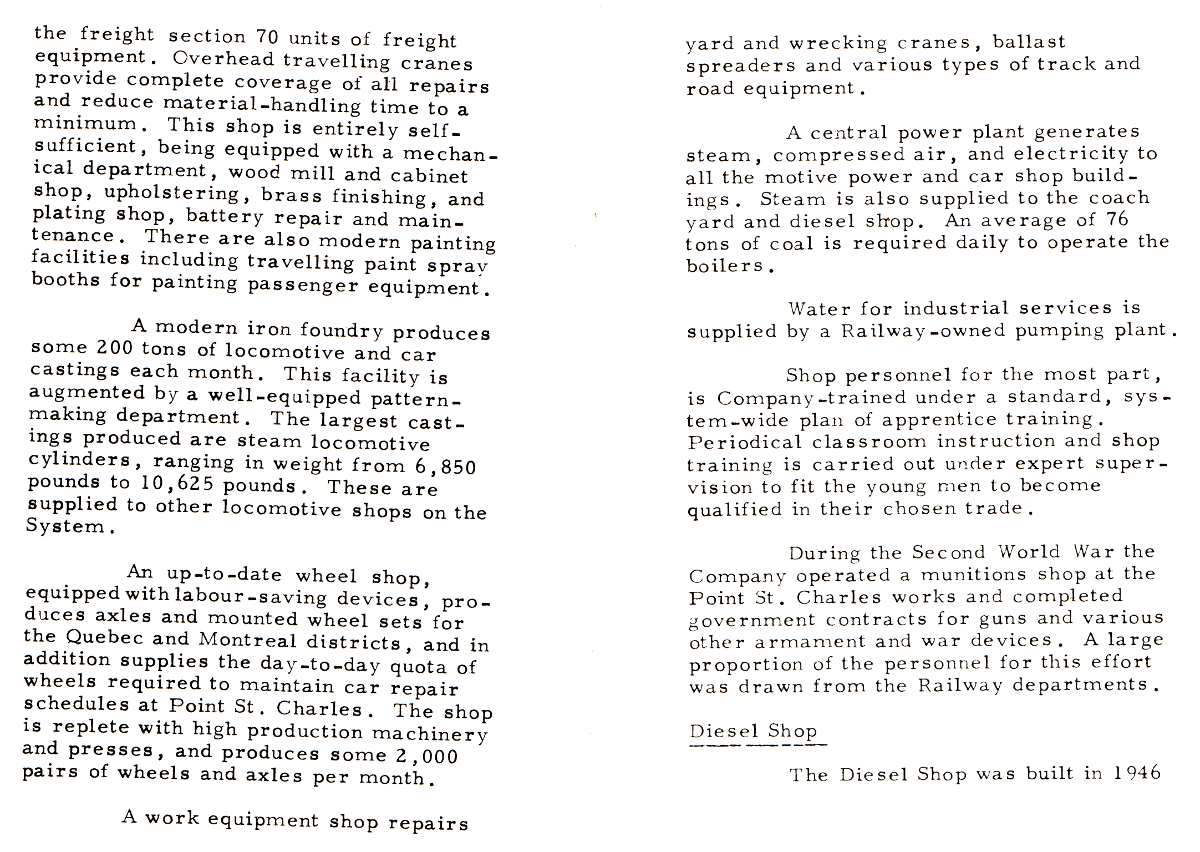 Perhaps some readers will recognize some familiar faces here. As a minor brush with greatness, several of my basement-scented Canadian National magazines bear a mailing label for Omer Lavallee. Brushed a second time ... one of these professionals, while visiting my parents in Kingston, dropped by and operated No 1 on the Nipigon Sub of my former HO layout.

So far removed from the Montreal railway environment of the 1960s - I obviously take great pleasure in the few links I can make with it.


Above: A scene from a bygone era.

A CRHA trip to Hemmingford, Quebec on Saturday, June 6, 1964 provided a number of unique sights and experiences. My father took my 2yr 9mo-old sister and me on this wayfreight excursion. In keeping with mixed train tradition, our heavyweight coach was marshaled just ahead of the caboose. An open-air observation car (a gondola), with its end lowered, was coupled ahead of the coach - mind the gap!

To board the train, we took the bus from Lachine to the south side of Turcot yard in the morning. I don't recall the return there in darkness, but my father's notes indicate it was at 2300hr. One of my father's teaching colleagues was kind enough to drive us home. This long-since-hailed-hero, Stan Jones, also dashed over to a depanneur at a post-sunset stop (sunset had been at Hemmingford) to buy rations for his party and milk for ours.

Providing a false sense of  'security' ... a similar, shorter excursion had previously returned us in time for dinner. However this trip provided a good insight into the long, unpredictable hours of work for a crew on this type of operation ... bring an oversized lunch pail and be ready for anything.

The photos above and below were taken as we left in the morning. We are approaching the Victoria Bridge via the west side of Point St Charles. 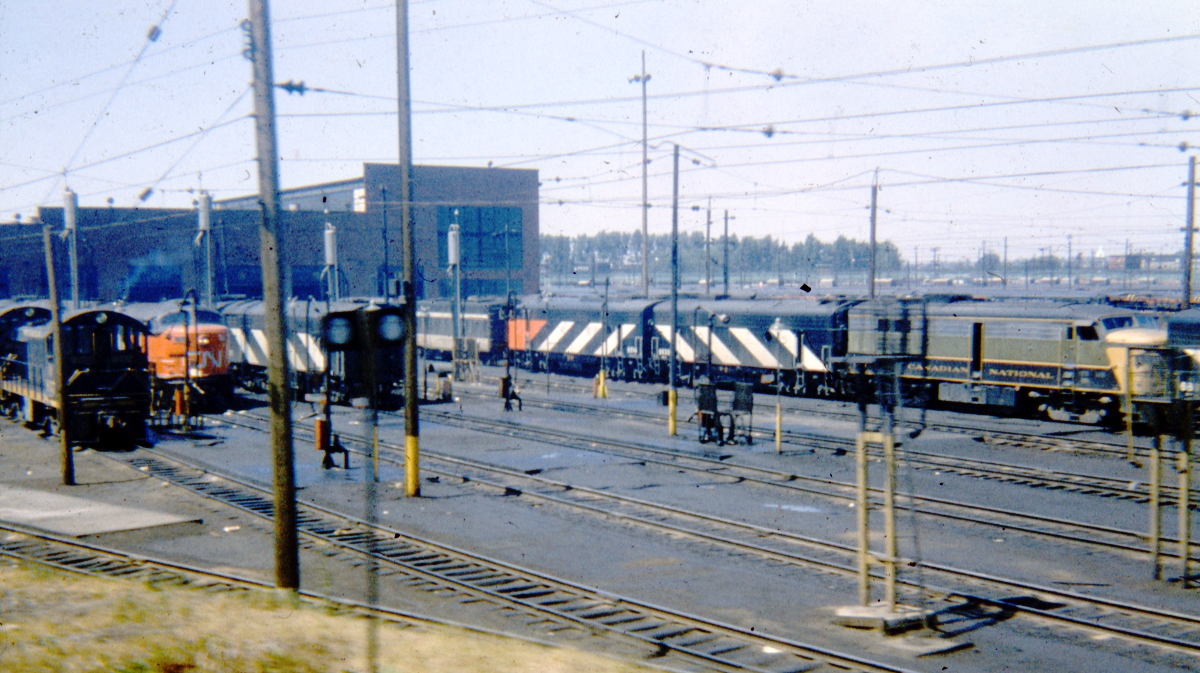 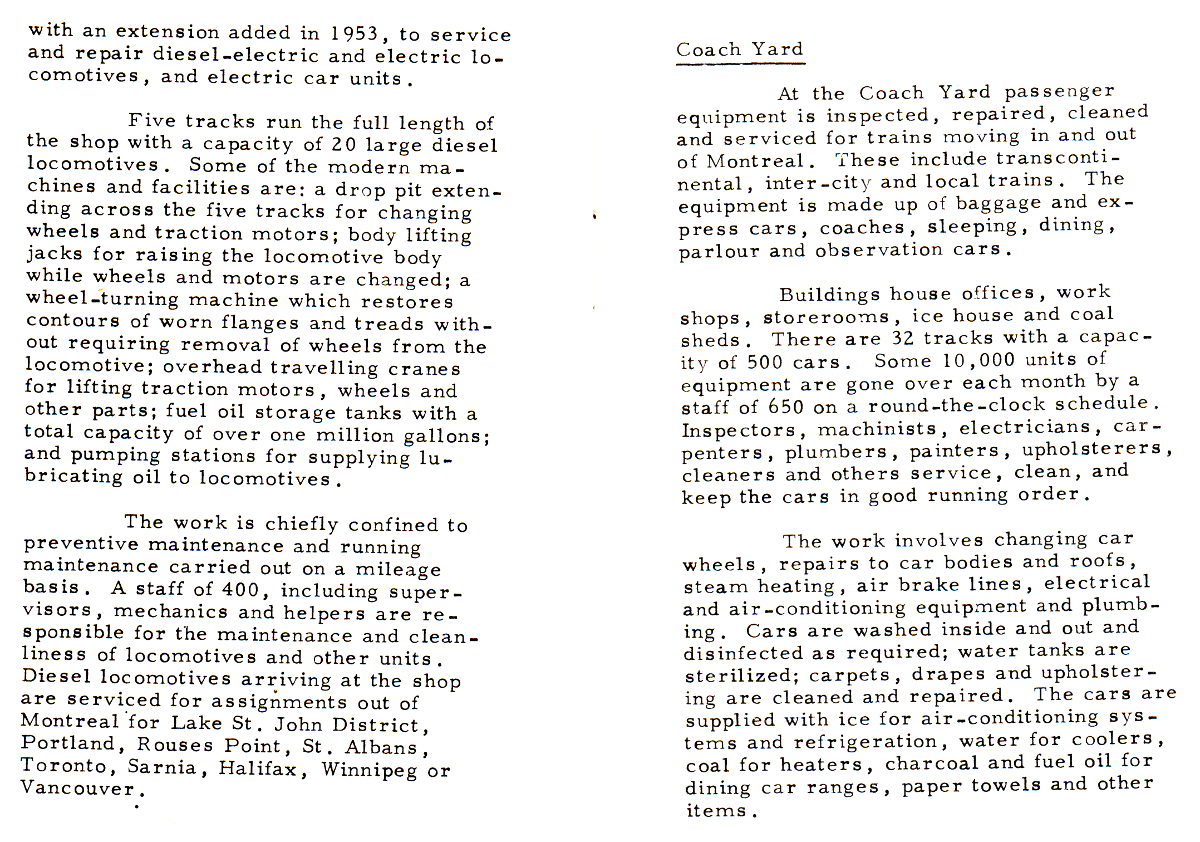 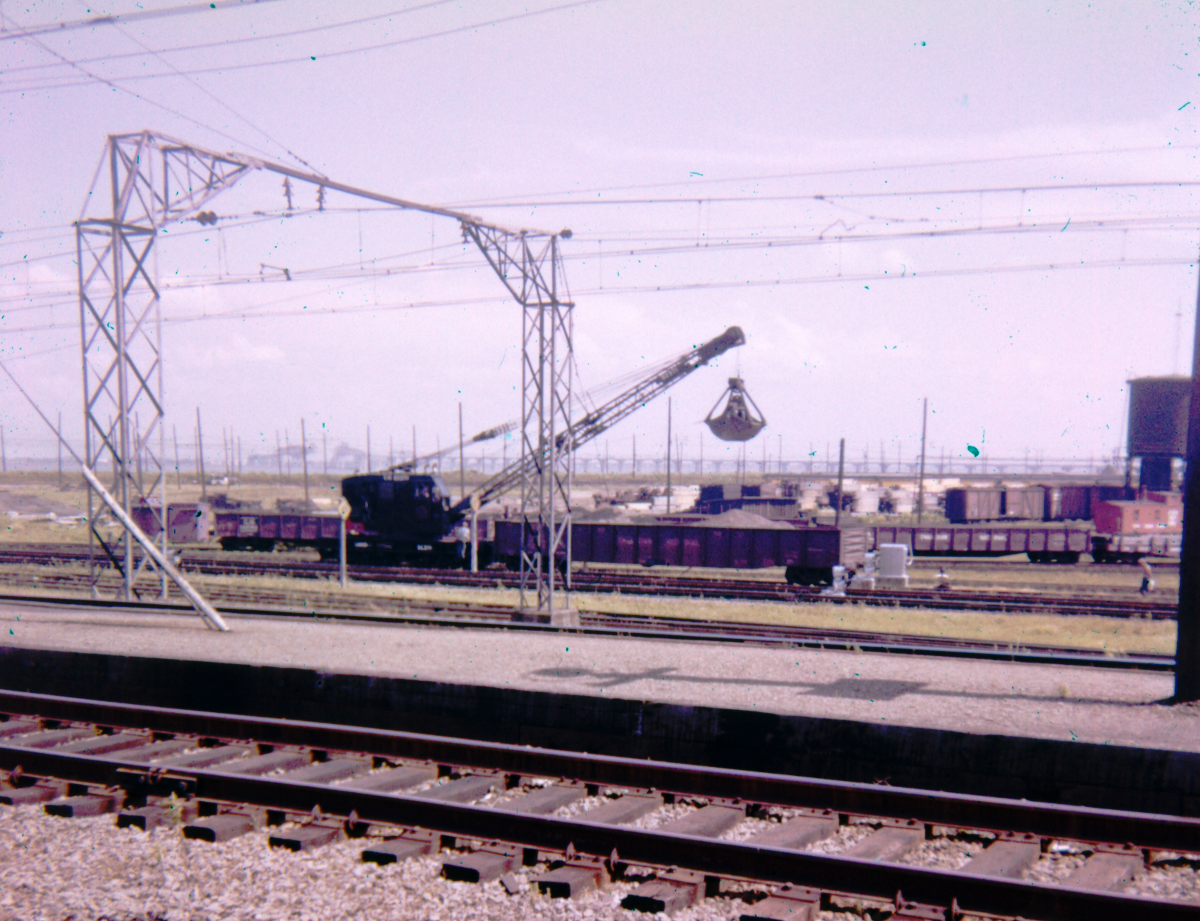 The photo above was taken on July 18, 1961 - probably to check the location for the event described below. Assorted wooden cars, a water tank and lumber storage can be seen, along with the main span of Champlain Bridge under construction. 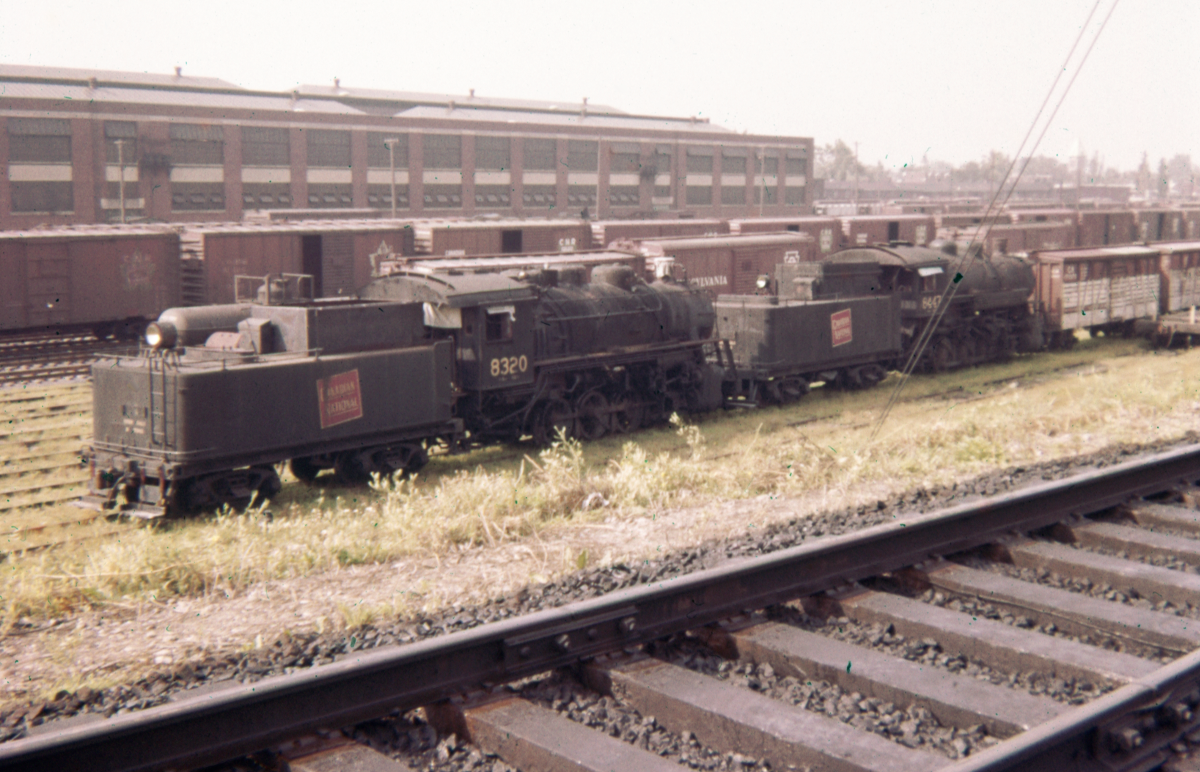 Above and below: On July 22, 1961, my grandfather, father and I were at Point St Charles to see 6153 pull an excursion train to Victoriaville, Quebec. After photographing 6153 reversing to its train at Central Station, we set up near the train washer at Point St Charles.

Generally, CNR steam locomotives in Montreal were held and scrapped at Turcot, so these two were a curiosity to us. According to Clegg and Corley, the 8320 was scrapped in December 1961 ... the 8447 was held/'preserved' for a time at London, but it seems it was also scrapped.

While waiting for 6153, our presence was requested in the tower of the washer. My grandfather was proficient in French and my father subsequently told me about the safety briefing we received, particularly the dangers of getting a foot caught in a power switch. The washer operator let us know when the train had departed Central Station so we could get into position. My father got his photos and we left the CNR and the washer operator in peace. 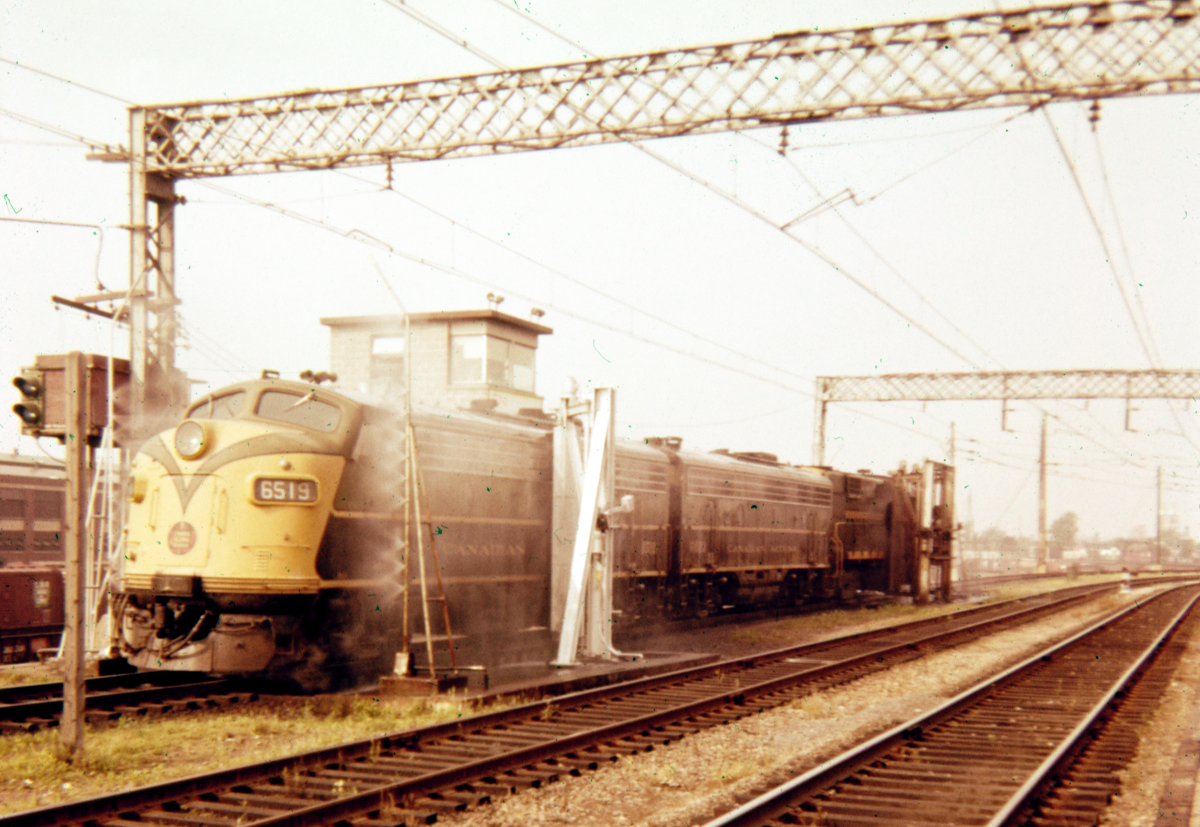 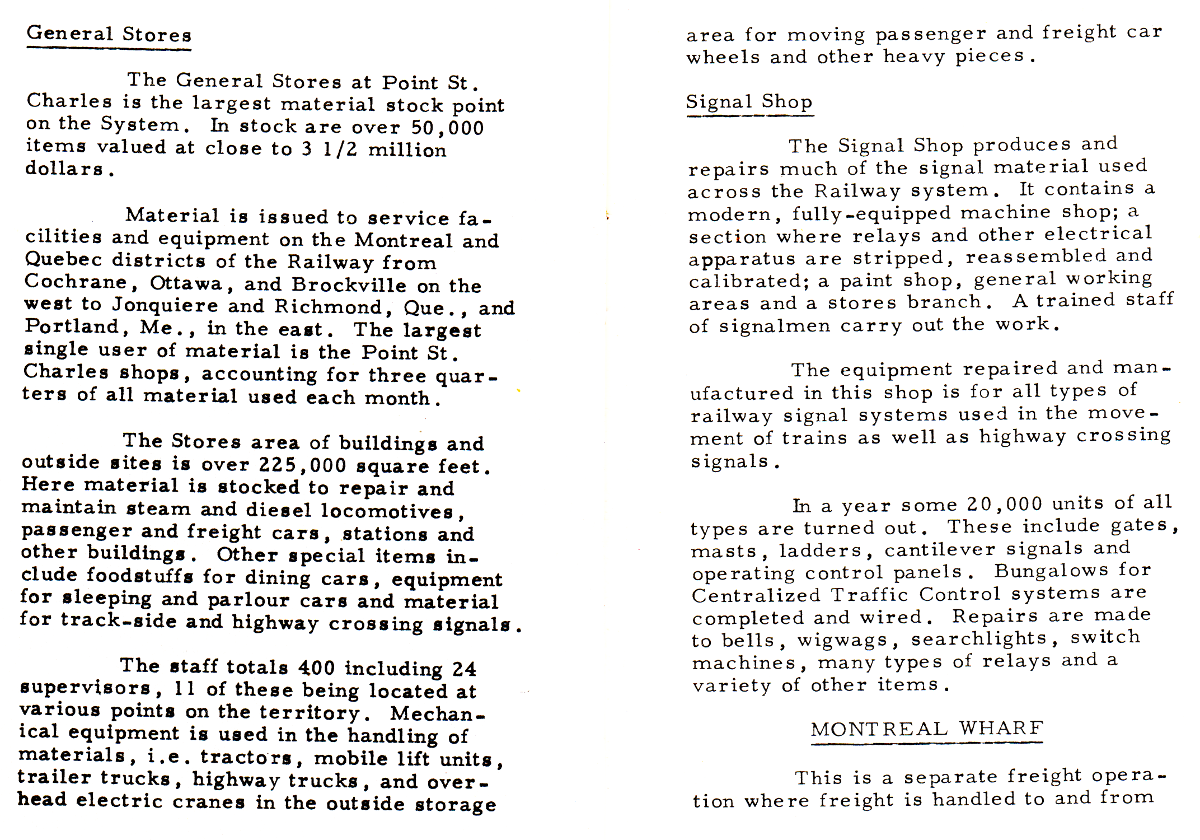 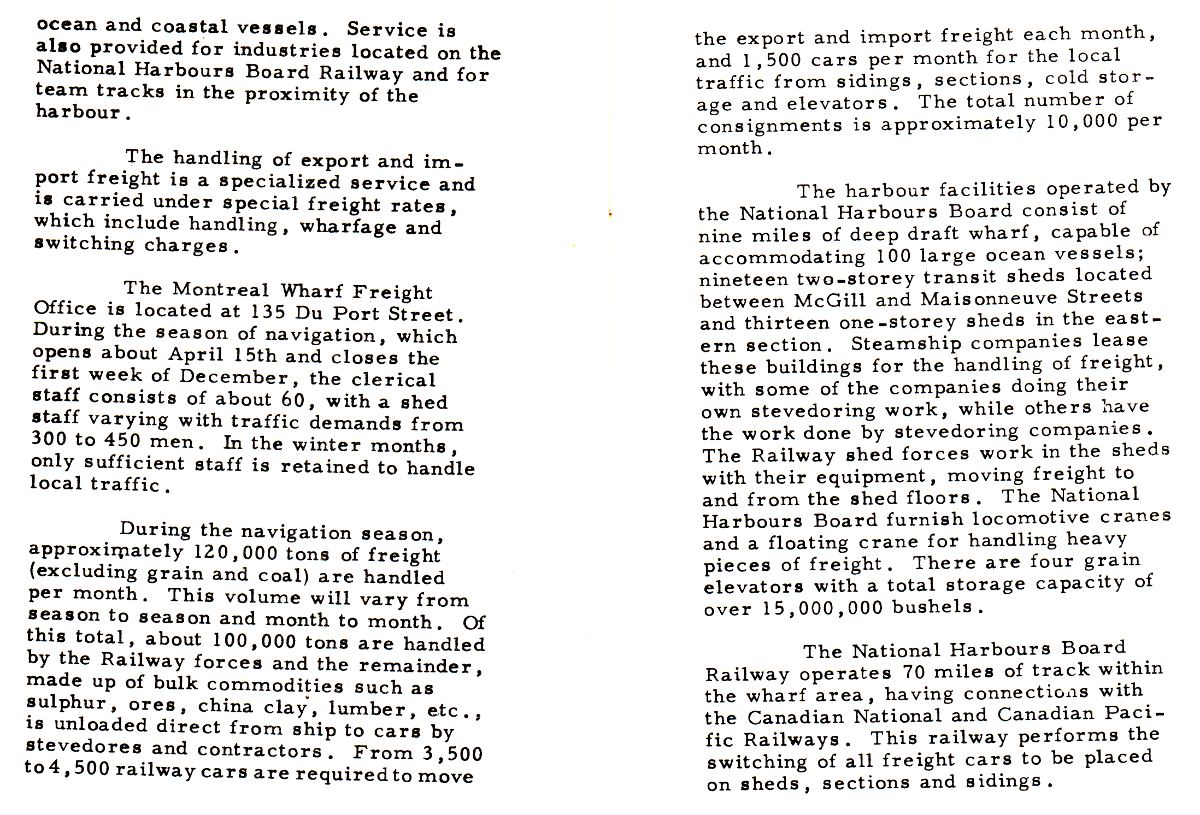 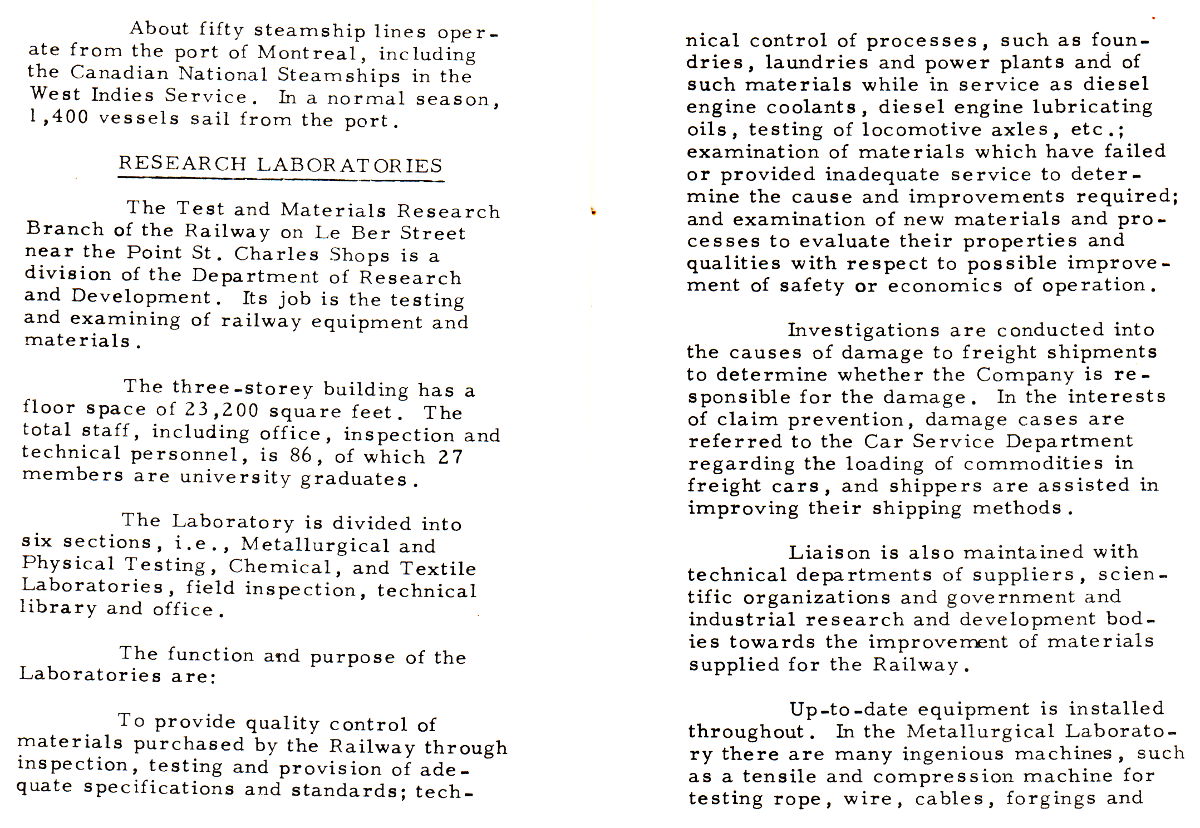 The images above and below illustrated the Lab's testing of supplies for the pending opening of the new Queen Elizabeth Hotel.

The accompanying article, of course, noted that these items were more delicate than most of those usually tested by the CNR's lab. 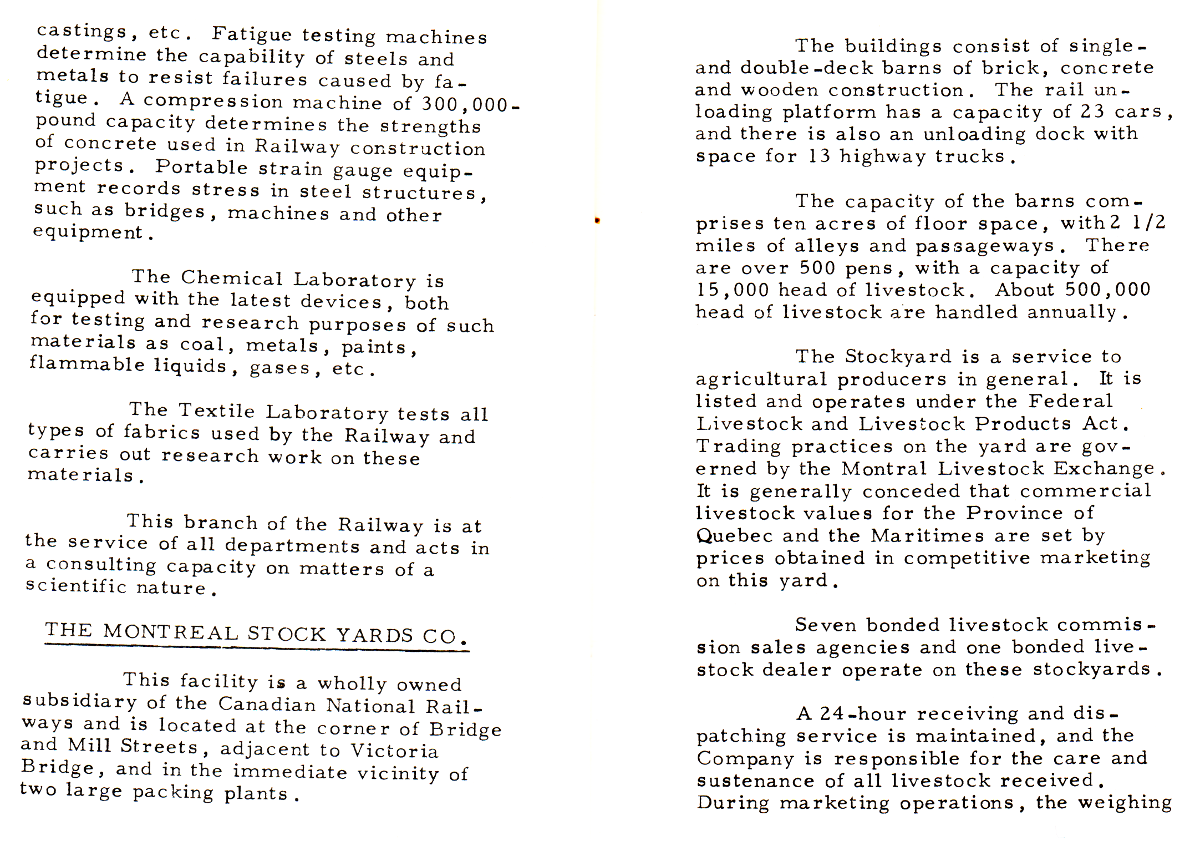 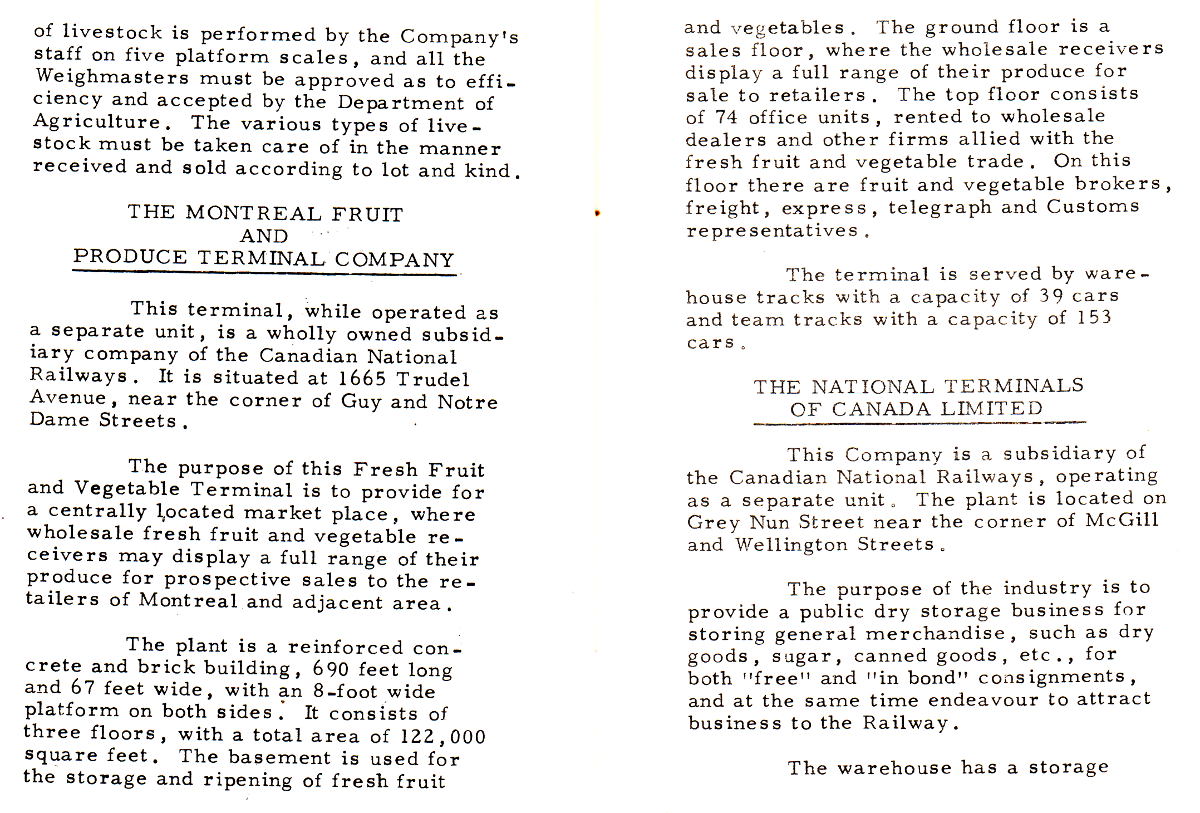 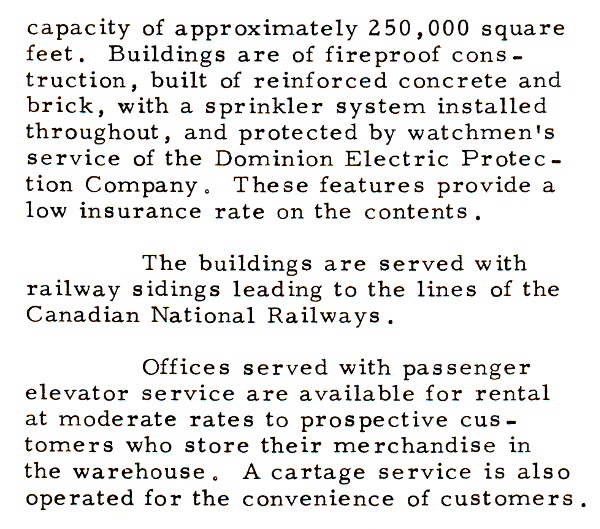 While the buildings of some of the older facilities described above may still exist (this was checked by using Google maps etc), I wasn't able to find any photos of them in use by the CNR circa the 1950s.

So, to wind up this descriptive sketch of CNR's Montreal Terminals, here is an article about the new CNR headquarters from the CNR's renamed corporate magazine: Keeping Track, May 1961.

The old building (still in existence) shown on the second page was the former Grand Trunk Railway headquarters - which had been used for this purpose by the CNR since its inception about 40 years earlier.