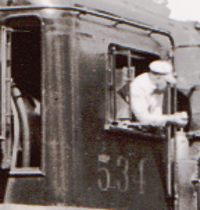 This post features an exquisitely-curated hodge podge of old steam snapshots; some of the first passenger timetables published for Nova Scotia's first railways; railway maps of the Maritime Provinces; and images from, and links to, old books on archive.org which you can explore.

Maybe 20 years ago, I purchased a small box of CPR steam locomotive snapshots at a railway show in Ottawa. Some are particularly small. Many were inserted into a typewriter to formalize the data in the photo. Most are labelled with fairly accurate locomotive and place data. Special paper dividers were inserted for those CPR subsidiaries which maintained their own corporate identities for a while.

There are nine photos of Dominion Atlantic Railway locomotives which I would like to get 'out there' to you. Where necessary, I have supplemented the data on the photo's reverse with information from Omer Lavallee's Canadian Pacific Steam Locomotives.

According to that reference, the CPR acquired the DAR's locomotives in 1912 - at the same time it leased the railway for 999 years.

Later on, as power needs changed, the CPR would 'lend' locomotives to the DAR from its own roster. As the DAR shop forces at Kentville seemed to have little interest in the intricacies of CPR long-term asset bookkeeping ... they'd repaint 'their new' locomotives in DAR heraldry and often bestow names on them. This naming practice probably originated from the early days of railroading when everyone named their locomotives ... but possibly it was reinforced by the maritime ship-naming culture all around the DAR. Lavallee stresses that these names were not used officially, e.g. for engine identification in train orders.

The snapshots are presented in road number order ...

With their stacks capped, this is the dead line. The child is obscured by errant light during the film handling or printing steps - not live steam. The wheel arrangement and the deep firebox suggest that this engine started life as a wood burner.


There are two entries in Lavallee for Eng 44. My guess is based on the diamond-shaped builder's plate. I am not someone who will fight to the death over a locomotive detail. Sometimes, I think plates were also attached for devices such as superheater bundles so I could well be wrong. 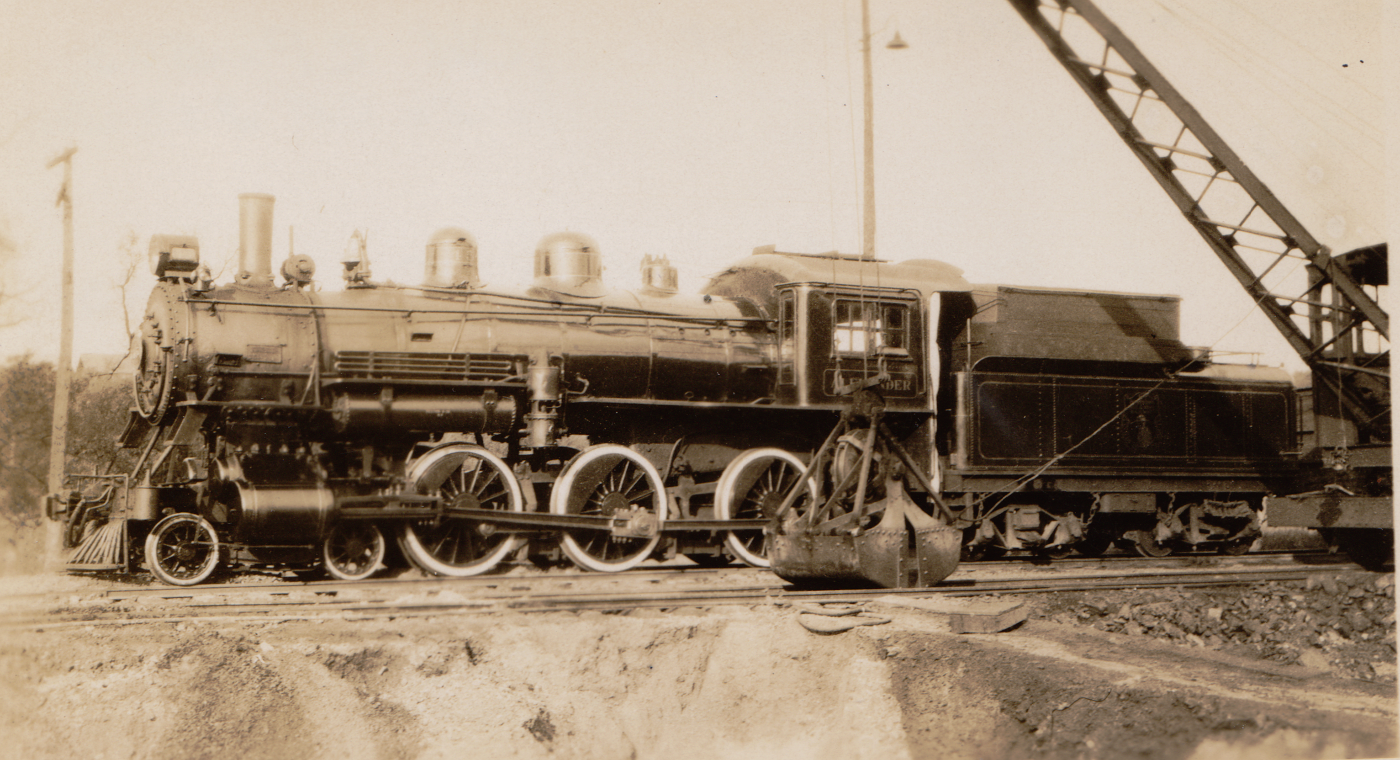 Before the ravages and deferred maintenance of the Great Depression and World War Two, a similar engine to 44 presented a much different appearance. I think the 'coaling facilities' are also shown in this photo ... or the ash pit (left foreground) has just been cleaned out. 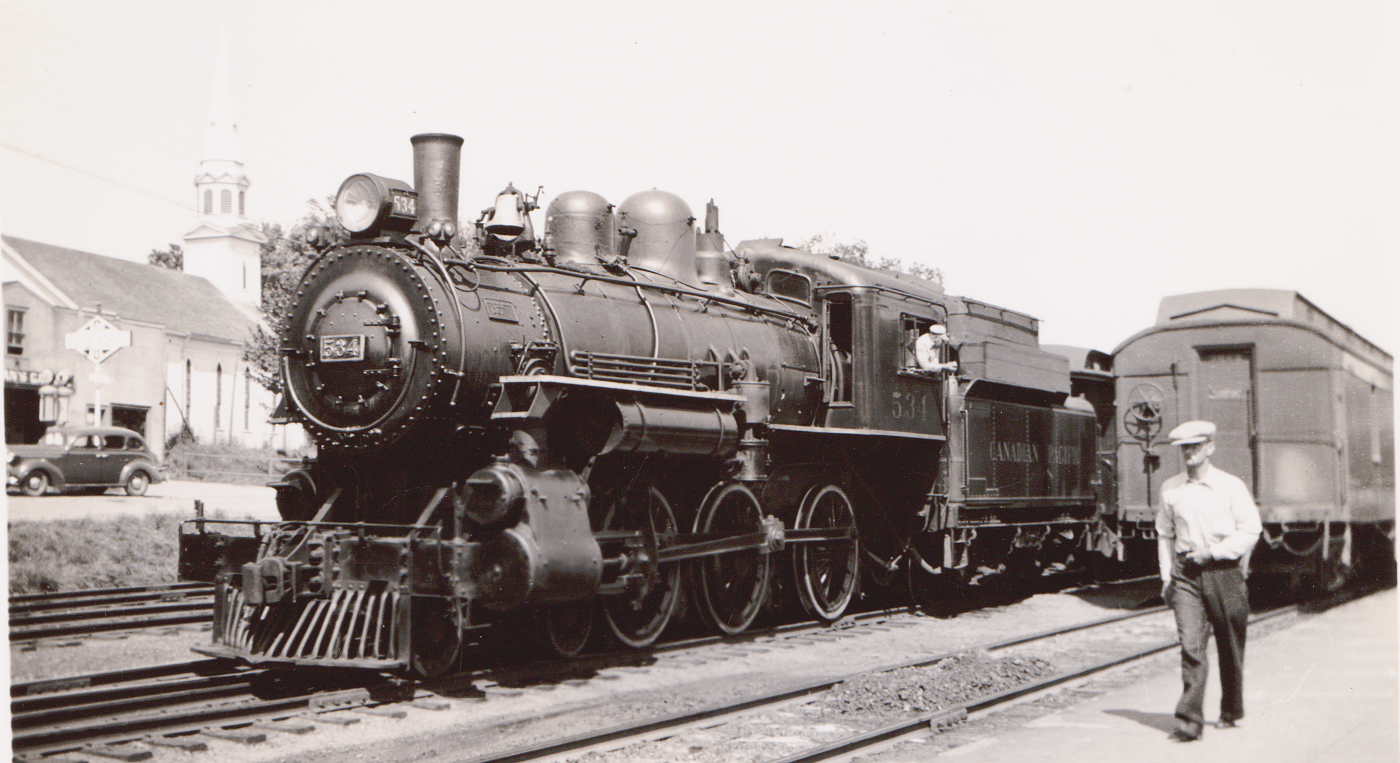 
My scant Digby knowledge leads me to believe that this engine is bound for Yarmouth. The fireman is probably snacking on a locally-grown apple. Having enjoyed Duncan du Fresne's When Steam and Steel Get in Your Blood, we can probably agree that a previous fast passenger train had its fire cleaned on the main track by that rail joint.

Below the fireman's hand, I think it may be the can holding potable water for the crew which you see. Often these were designed to be hung up inside the cab. Inside the lid was often a hook to hold the common metal drinking cup shared by the crew. 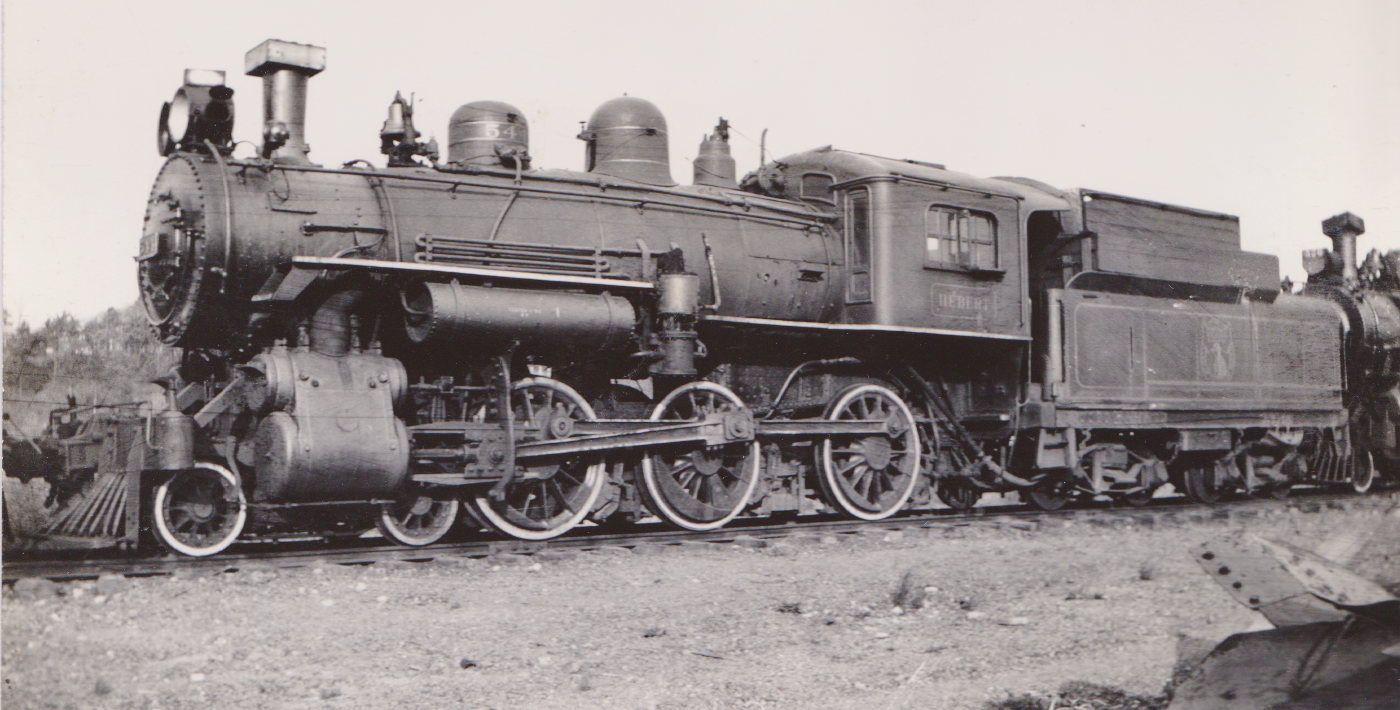 544 Hébert. Saxon Locomotive (Chemnitz), 1903.
There is no date or location noted on this photo.

The stack is capped and headlight parts may have been scavenged.
Perhaps the metal fabrication at the right is a former tender 'pilot'.

It seems that some DAR locomotives sometimes had white smokebox fronts?


If you squint and stare, you may see the fireman filling the tender from a standpipe.
The water would be coming from that water tank at the right margin.

At the 'ash pit'?
The worker in the fireman's seat seems to be in comfortable repose.


This seems to represent the extent of the Nova Scotia passenger railway transportation system at the time of Canadian confederation. You'll notice on the last line that, before the DAR to Yarmouth was dreamed of, ocean steamships were transporting passengers from the railheads reached overland from Halifax. You may also have spotted the names of future employees of the CPR in the header.


Above (CPR) and below (CNR) are railway maps for the Canadian maritime provinces. Using the line numbering system, you can determine their antecedents in the lists at the right.

These fold-out maps are roughly legal size and the book is 'bound' with two robust staples. Any fuzziness is the result of avoiding damage to the book while scanning. Google limits the size of my image on the blog.

The following images come from some of the related books on the archive.org website.
At the end of this post are links to these three books, if you'd like to have a look.


from: Clarke's History of the Earliest Railways in Nova Scotia, 1924

Above, is the second Windsor and Annapolis Railway engine - Gabriel.
The railway's first two locomotives were named after the main fictional characters in Longfellow's poem.
The adapted British design of this engine can be seen.


In olden tymes, they didn't have as many different 'names' for ships/engines as we do today ... it seems.
Did the restroom doors bear signs 'Evangelines' and 'Gabriels'?
How much did this noble vessel roll in a gale?

from: The Land of Evangeline, Dominion Atlantic Railway, 1897

from: Boston and the Maritime Provinces, 1900

Here are the links for these books:


Clarke's History of the Earliest Railways in Nova Scotia, 1924