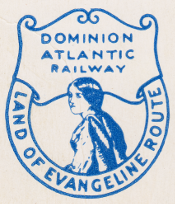 It seems as if he's been away longer in the Land of Evangeline ...

Probably after working his morning half-day on Saturday, October 1 at the Windsor Station headquarters, he was travelling on his CPR pass (plus extra charges for his lower berth and for his CNR mileage) from Sunday to Saturday, inclusive. ... Most people generally worked 5 1/2 days per week in office jobs back then.

... This plan would bring him back in time for Thanksgiving Sunday.

To recap: he travelled from Montreal, via Maine, to Saint John; by ferry to Digby NS; via CPR to Halifax; via CNR to Yarmouth; and in this posting - from Yarmouth to Montreal.

He took no photos of trains or railway facilities between Digby and Montreal.

You can trace his route on the map below.
Also note the steamship routes between Yarmouth and the US.

It seems that the CPR went on a station-building spree in the late 1940s.
Flat-roofed brick stations replaced more maintenance-intensive wooden buildings after World War Two.


It now occurs to me that Montreal must have ordered a boxcar load of metal letters. Places like Red Rock and Yarmouth, once their building was complete, drew the necessary letters from Montreal Stores - I'm kidding. Only one light was necessary ... and it illuminated both the grounds and the station sign.

This photo was taken from the train after departing Yarmouth.
With the hip roof and tall chimney, is the Wilson residence (see previous post - Halifax to Yarmouth).
Beyond is the CPR Lakeside Inn.


Working on the theory that 'older is better' here is the oldest employee timetable for the DAR in my father's collection. Below are posted the DAR 'system' Special Instructions ... along with my father's route back to Digby. The balance of this timetable follows at the end of this post. 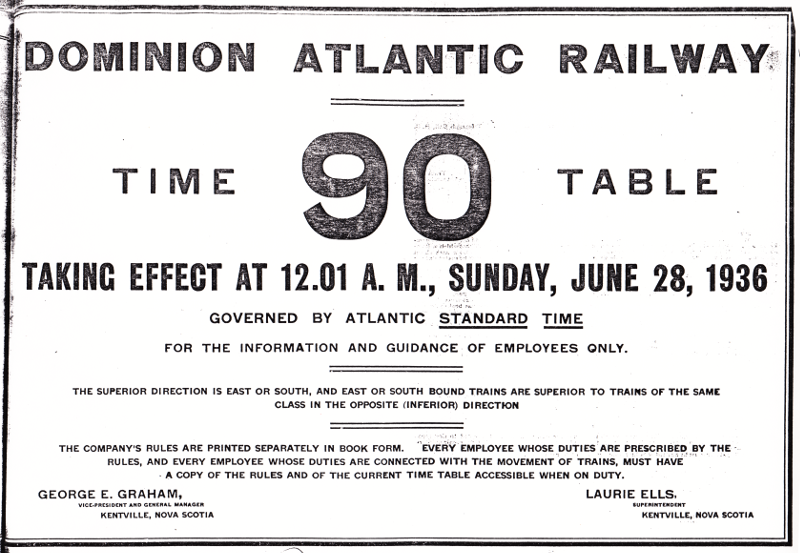 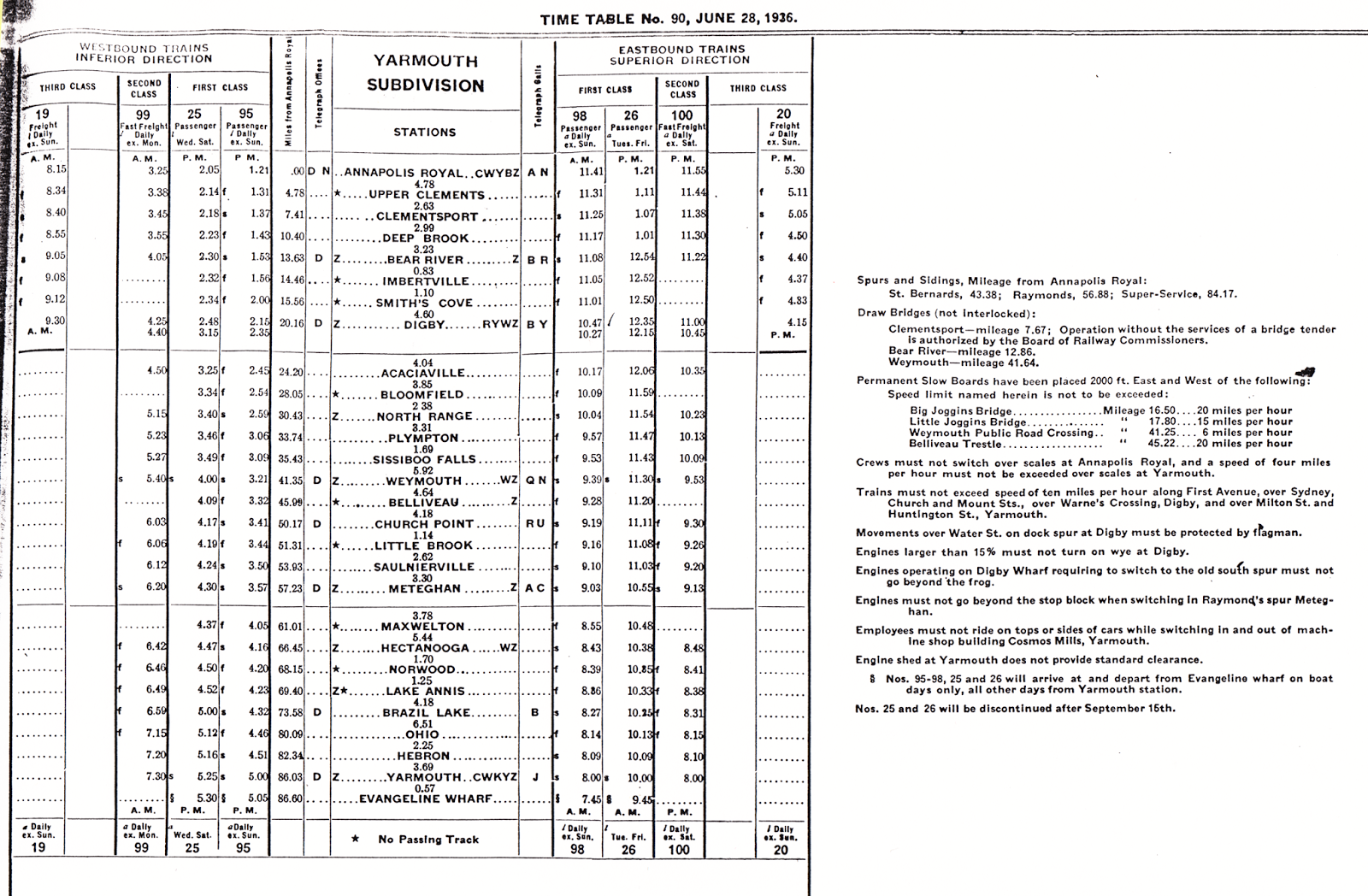 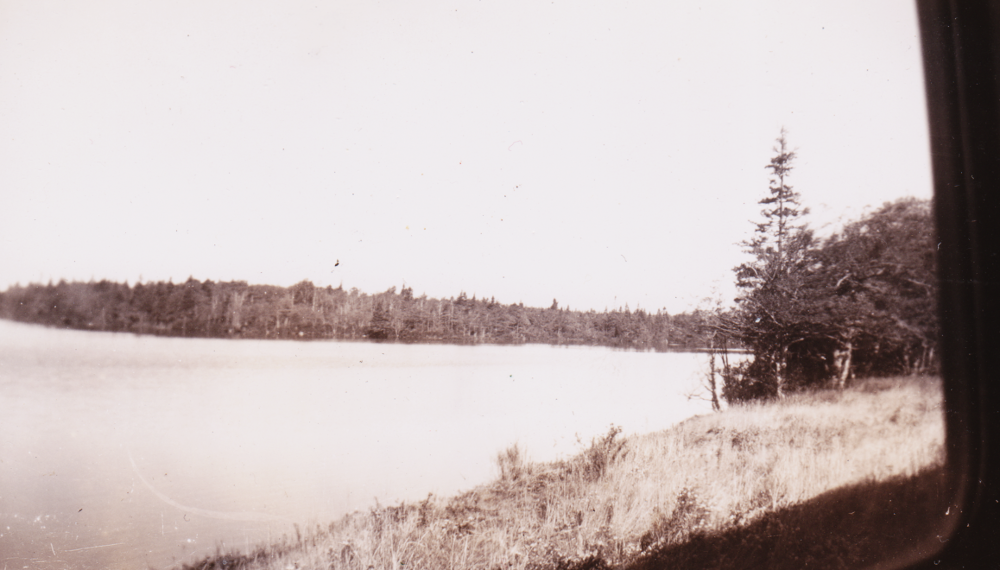 Again, the fish-eye convex at the outer reaches of my father's box camera lens make 'levelling' a challenge.
Notice that the photo is taken from inside a sealed-window coach. 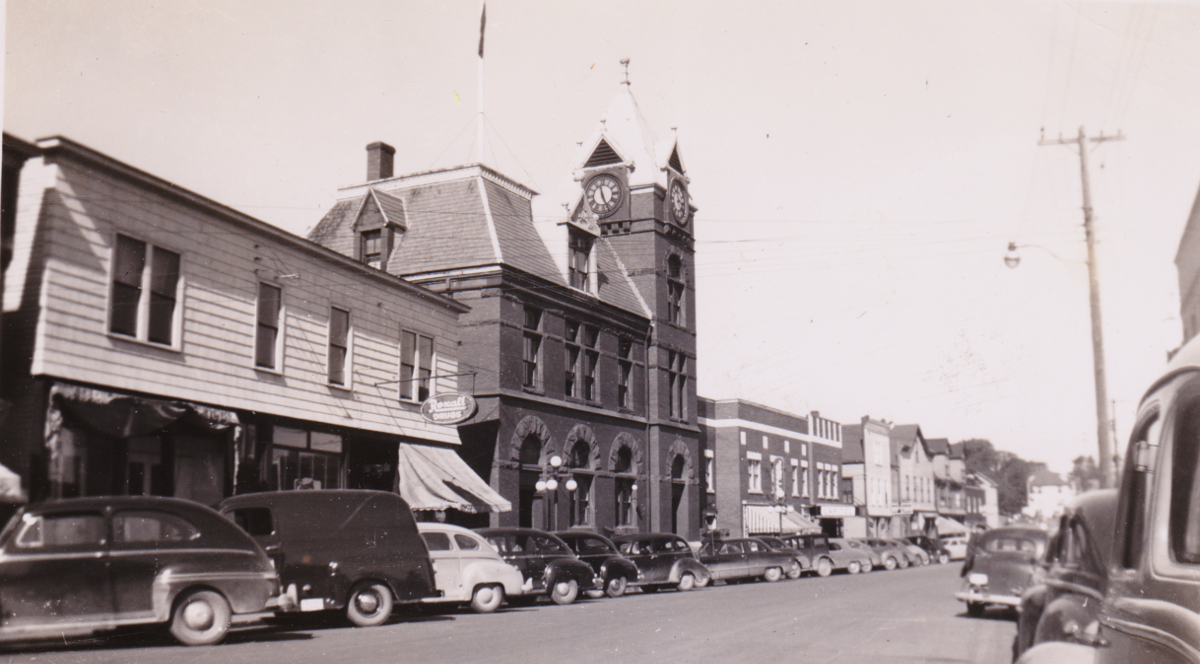 My father noted he had extra time in Digby before sailing on the SS Princess Helene.

Killing time, my father probably took this photo after strolling on Water Street.
Passenger equipment can be seen on the wharf track.

The local track arrangement in Digby was quite interesting. A commercial VHS tape of home movie films of this era shows the track of the wharf spur weaving obliquely - with close tolerances - between houses and their property lines. After clearing houses, a movement would then cross the streets on which the houses were located. 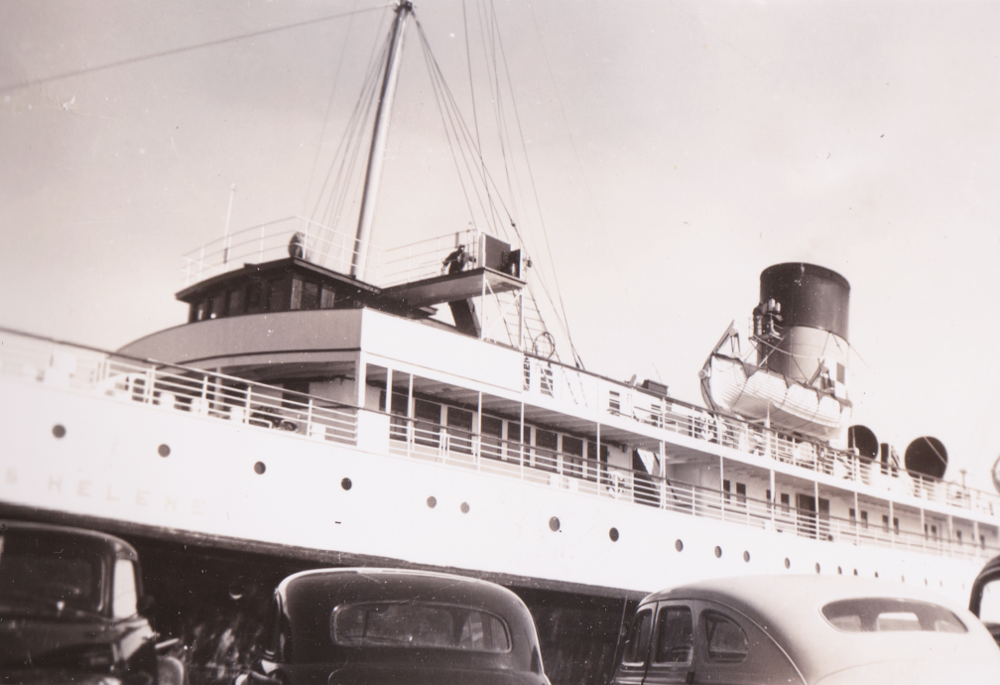 It is not clear what the crewman on the bridge wing is doing.
It is possible he just reached there via a staircase and is ducking under the wing's railing.

There is a lot of interesting human activity on the wharf.
It almost looks as if the yard switcher has been sent here with the headend cars. 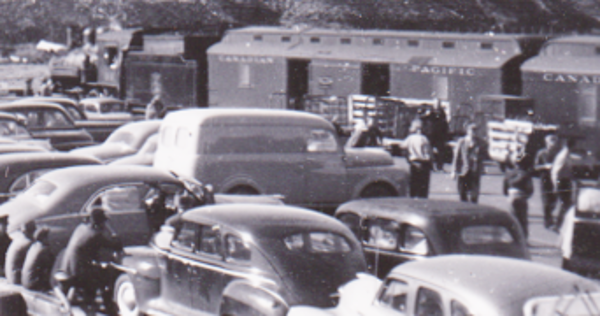 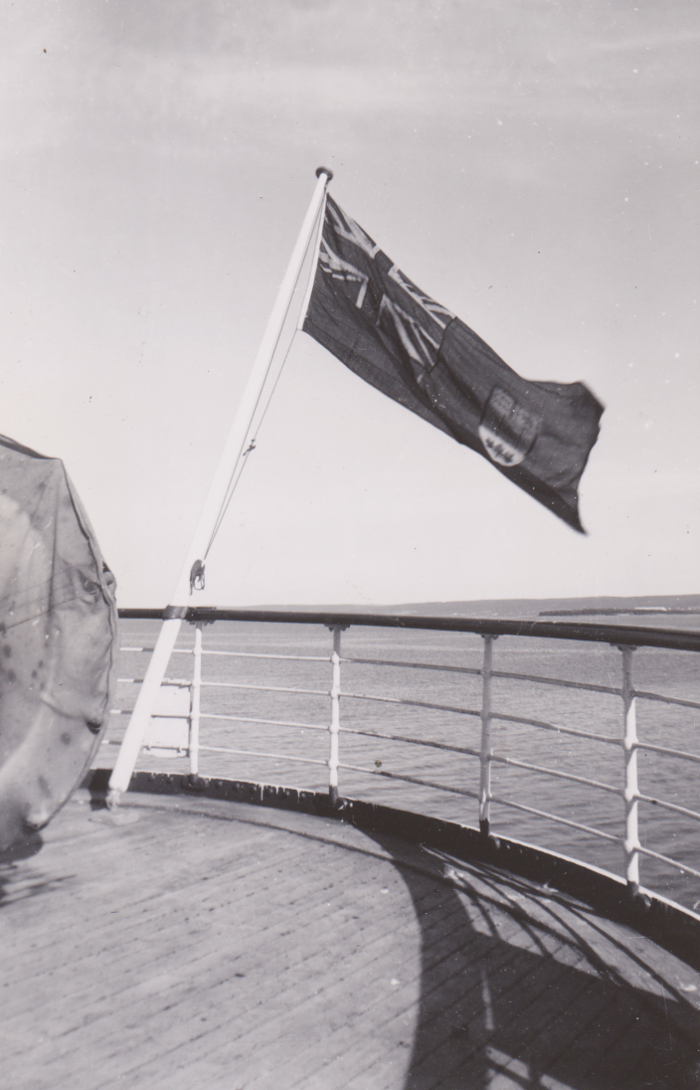 The Canadian Red Ensign flies.
There is no wake at this point, so we may still be at Digby. 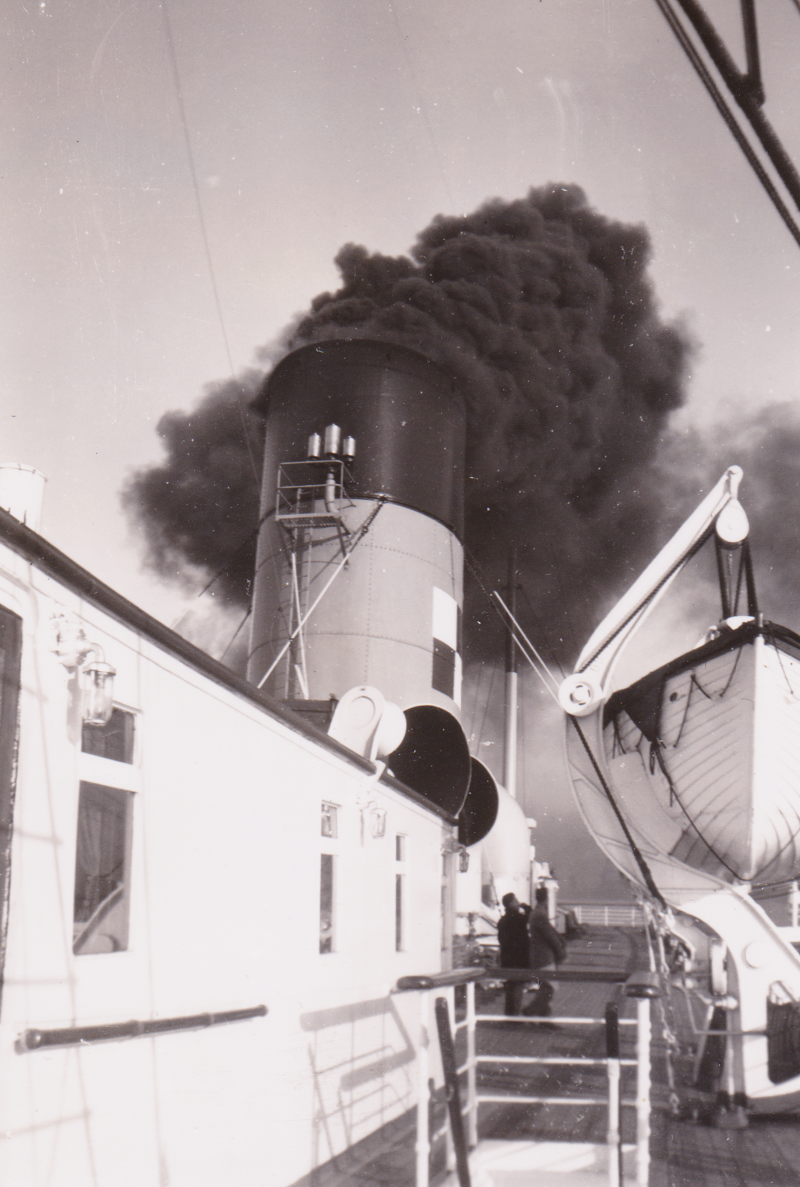 I'd say it is possible that the ship is now underway ... 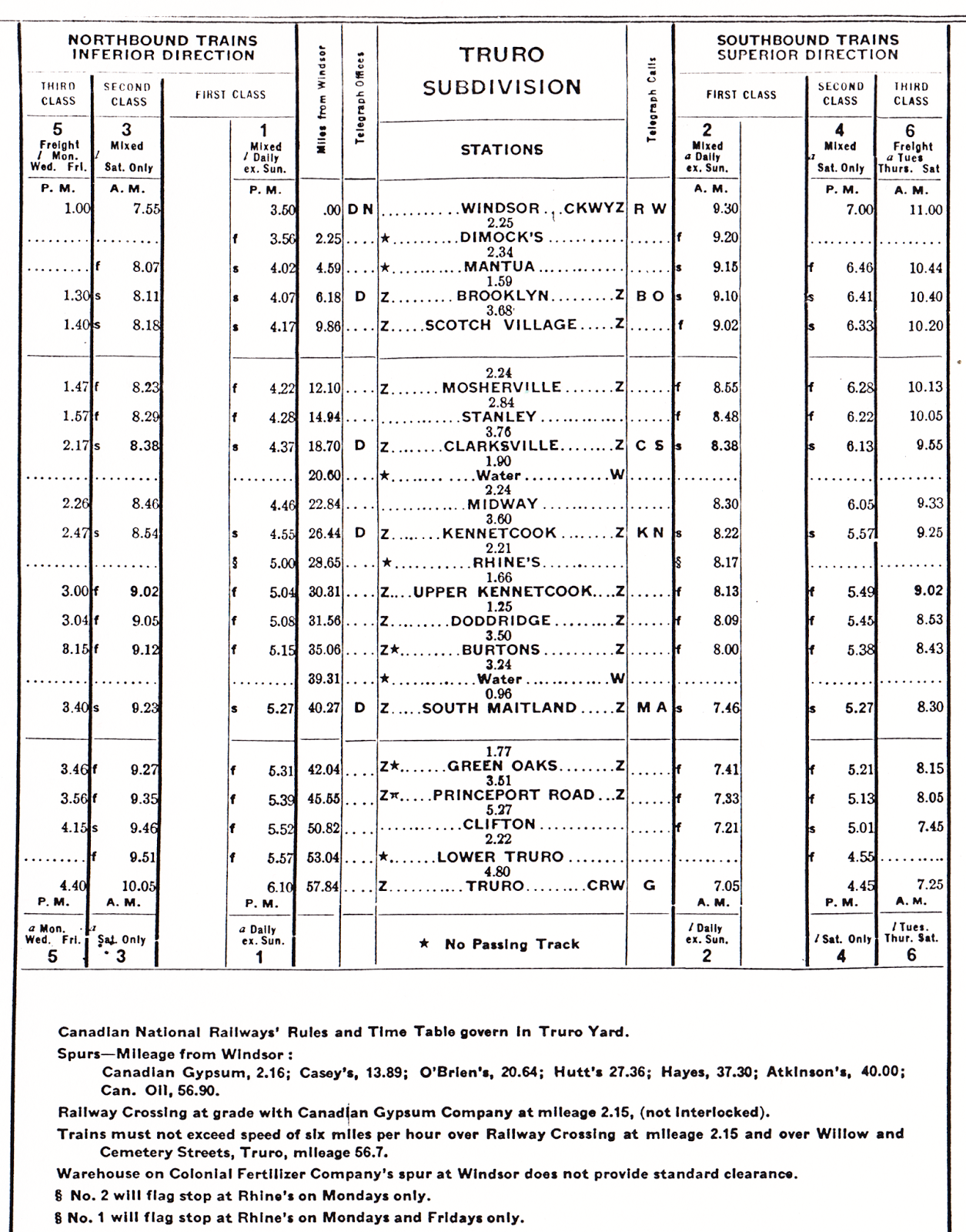