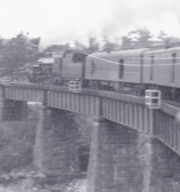 As my father's 1949 tour of Nova Scotia by rail continues, he is travelling from Halifax to Yarmouth on the CNR. I am including employee timetables for CNR lines along his route so readers can 'follow along at home'.

You may recognize a couple of these photos - from a post about a later visit my spouse and I made to this area in the 1980s.

To my previous effort about Bridgewater. 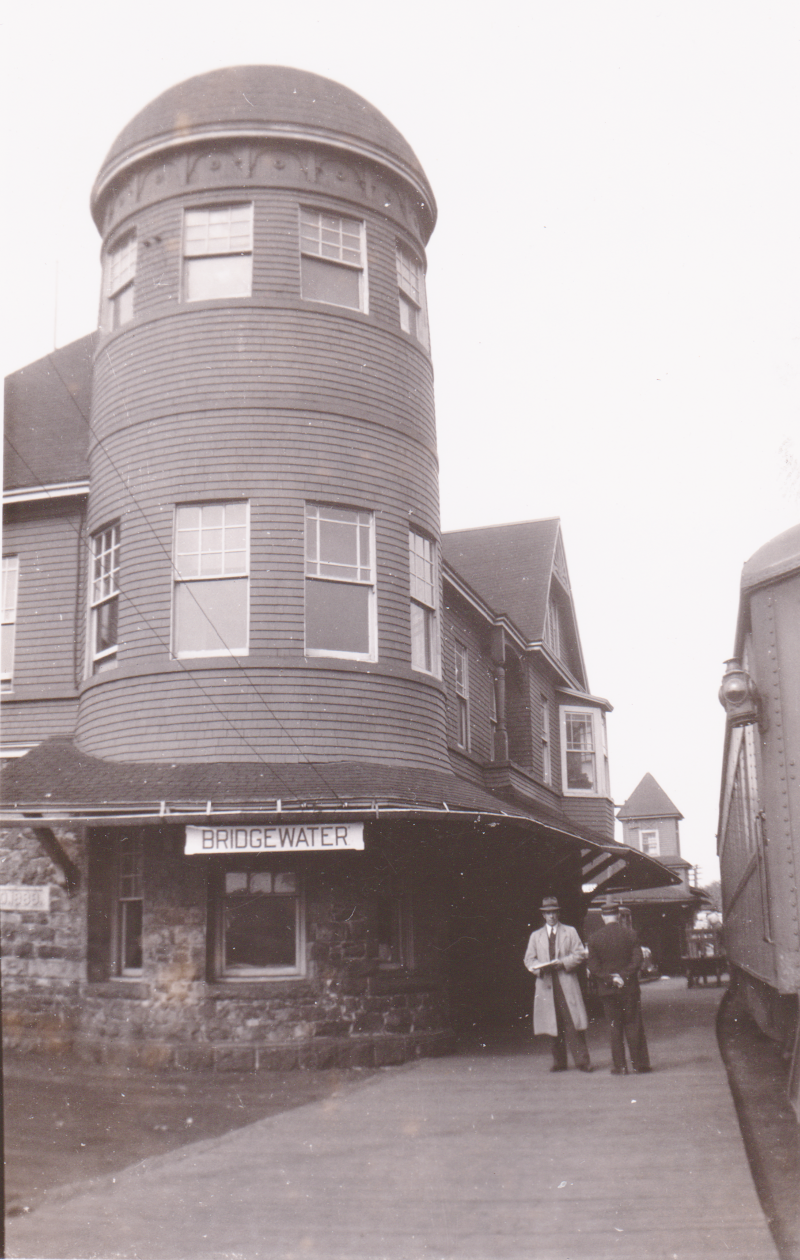 My father's first shots out of Halifax are at the key (former) Halifax and South Western Railway location of Bridgewater. The conductor supervises the loading of headend traffic while a fellow passenger observes my father's work with his box camera.

By the time the following employee timetables were published in 1957, it seems that regular passenger service had been withdrawn from the CNR to Yarmouth (i.e. beyond Southwestern Junction). The 'mixed' 285/286 would be a reasonable proxy for my father's train.

My 1944 public timetable (not shown in this post) shows only mixed train service, Halifax to Yarmouth, on the CNR during the war.

I am including all of the subdivision footnotes as some of the data is historically interesting.

My father's train only travels 4.3 miles on the Bedford Sub (Probably this segment was also within Halifax yard limits in 1949? Movement by ABS in 1949??), but the volume of passenger traffic and the operating details for Halifax are good to have 'out there' with my fellow internauts. 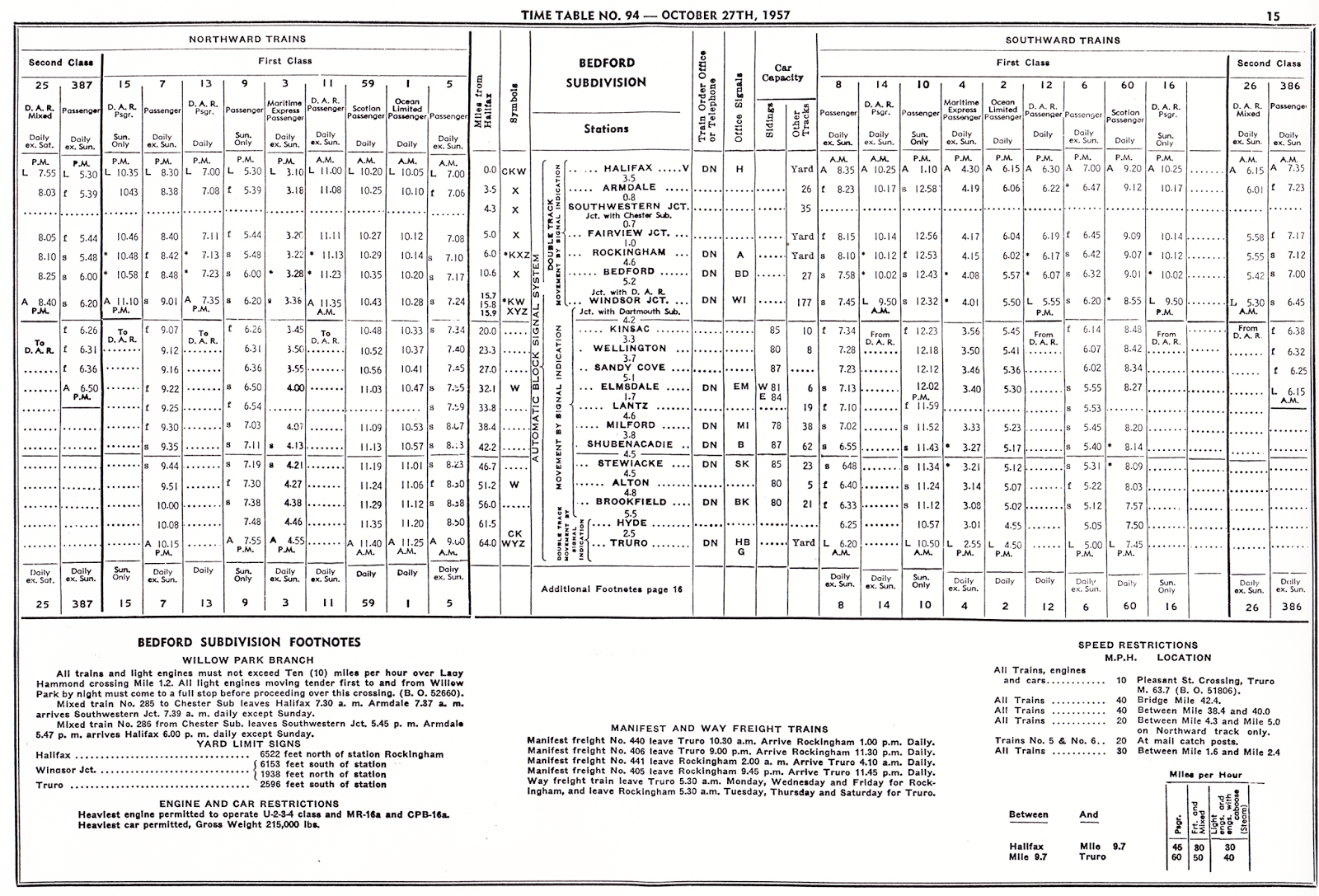 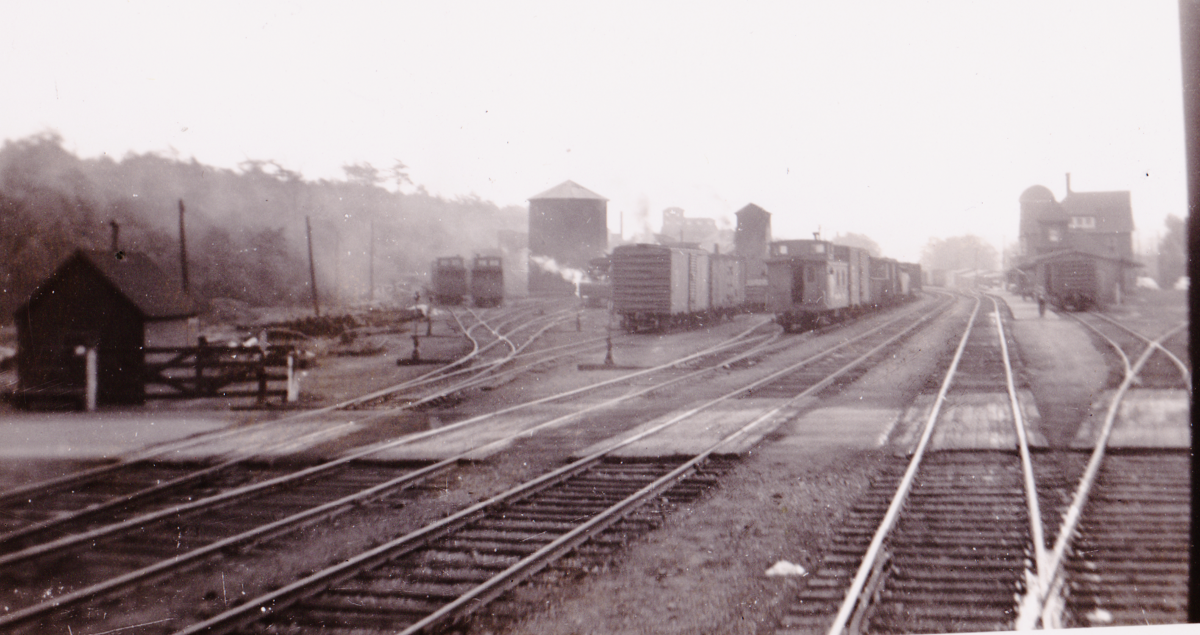 After departure, the passenger car diaphragm forms the right border of my father's photo which nicely takes in a lot of the physical plant and rolling stock to be found at Bridgewater.

This map from 1915 above shows the Canadian Northern's territory running from Bridgewater over to the Bay of Fundy. 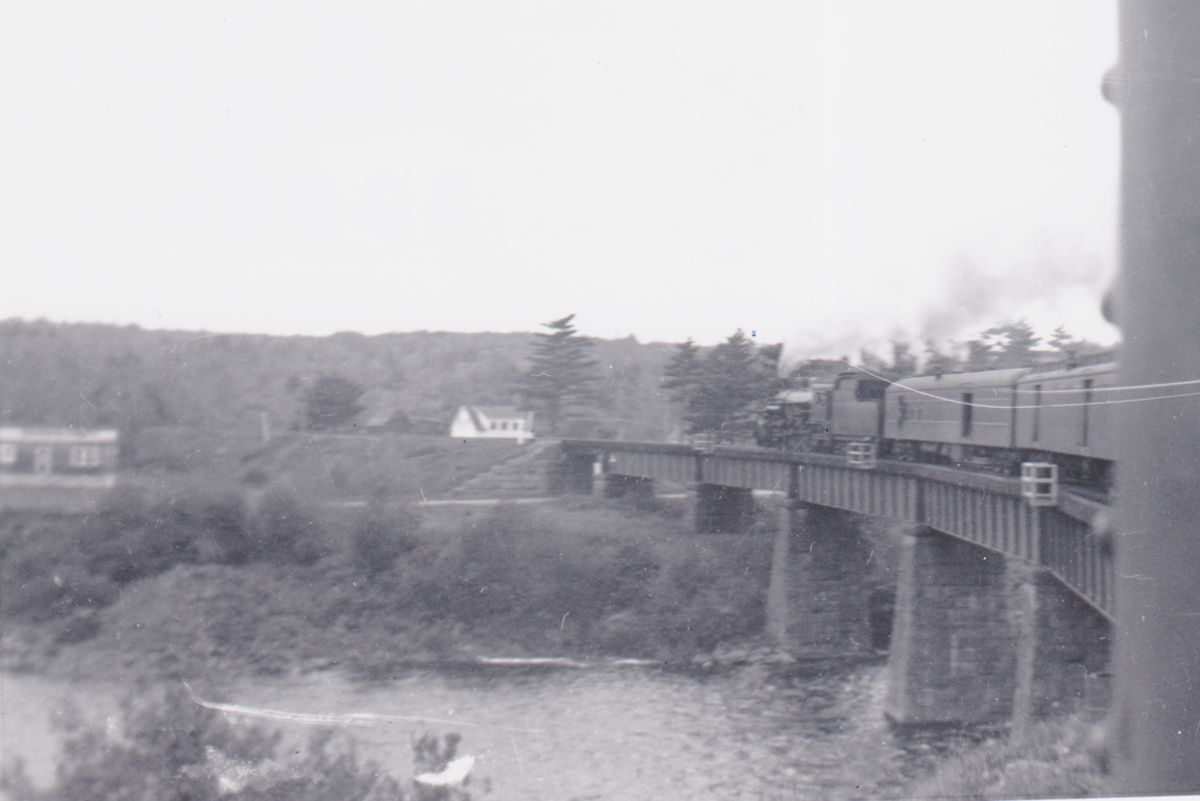 Just out of Bridgewater (CNR station), my father's train to Yarmouth crosses the LeHave [sic] River.
It has not yet passed through the town of Bridgewater, Nova Scotia and it won't be stopping there.

... see my link (above) about Bridge-whatever-it-was for more details.

Fortunately, this train will not operate on the Middleton Sub, so we can ignore all of this.


... Be sure to check out my new blog:
Is Halifax on Nova Scotia's east coast or on its south coast? 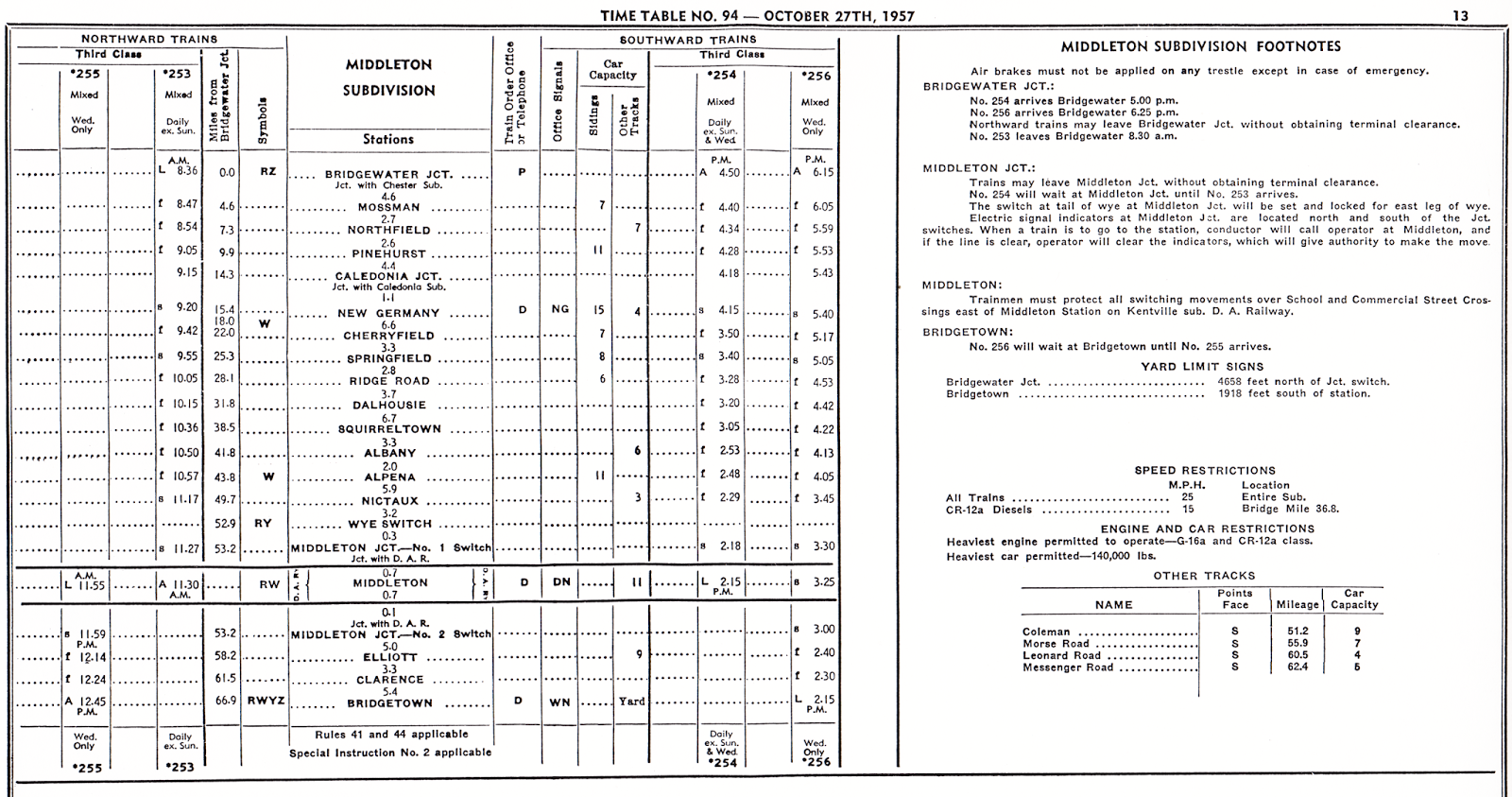 Having forsaken the Middleton Sub (above) beyond its junction switch, my father's route to Yarmouth continues below. 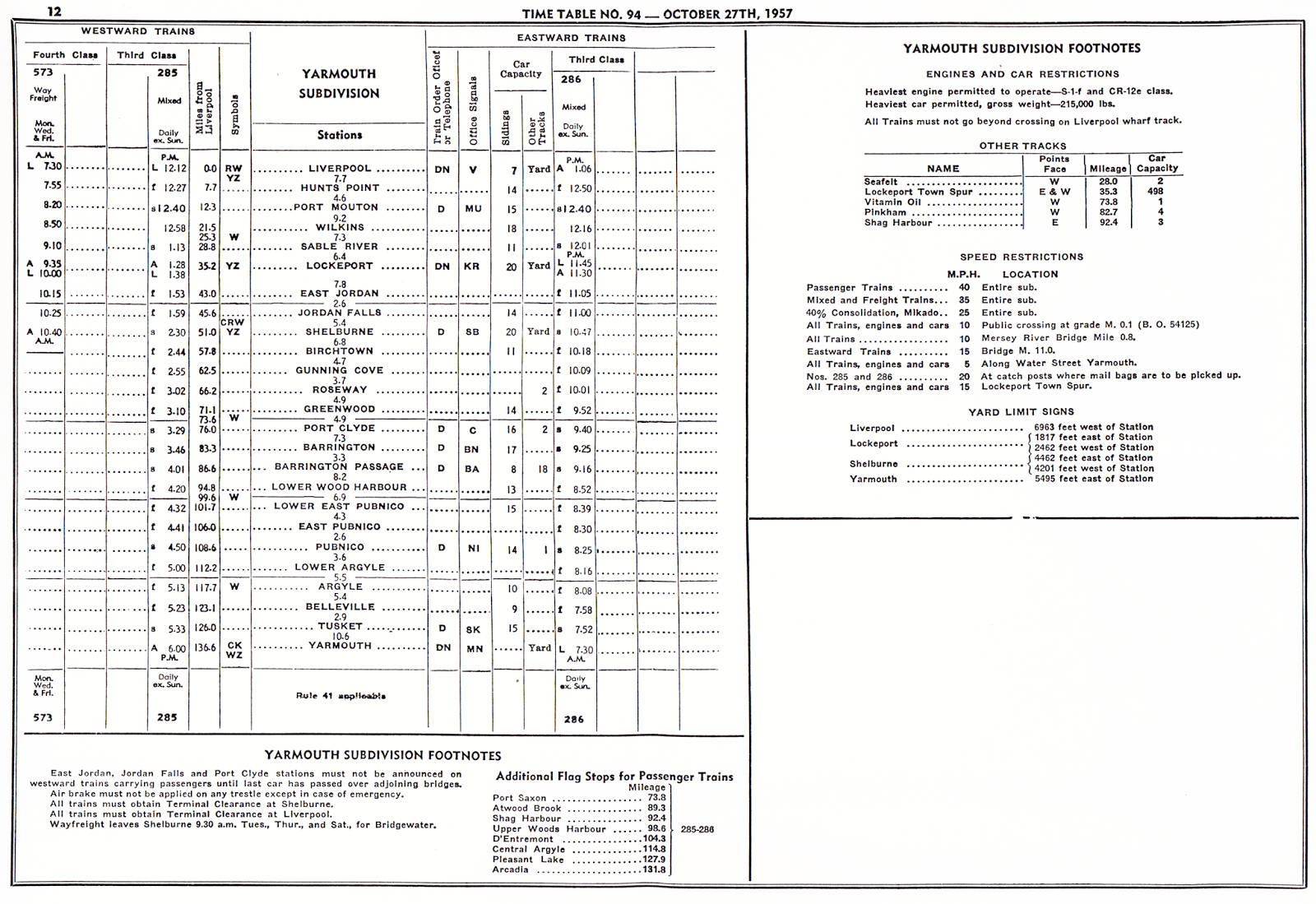 My father wrote thousands of letters in his lifetime and was able to maintain many distant contacts simply because he enjoyed the writing and exchanging of letters.

To some extent, the nearly magical act of sending a packet of material you created far, far away for just the price of a postage stamp might have been part of the attraction. As well, imagining an envelope working its way through the coordinated system of humans moving the mail via trains, trucks and ships also stirred the imagination. Then, there was also the lingering anticipation of a reply.

... All of this is completely lost on us today with effortless-to-send-and-nag, ubiquitous, spammy email ... and all the various expanding and collapsing spheres of social media.

An RPO crashing along, curtained behind entrained snow, under coal smoke, is somewhat more romantic to picture ... than virtually identical hot server farms whacking up your 'code' into virtually identical 'packets' and forwarding them ... the whole process evidenced only by the blink of an LED.

A closing signature with a fountain pen on rag paper could communicate more about the writer ...

... than a string of today's soulless, stamped-out-of-tin emoticons.

A friend of my grandfather's was the father of the woman shown below. She married an agronomist who subsequently worked out of Yarmouth. This family relationship, visit and tour was made possible by my father's correspondence habits.

Richard, Harold, Phyllis, Linda Wilson
(For my family looking in: Phyllis Angell was the daughter of John and Florence Angell).

Harold was in an Agricultural Program at Macdonald College (on Montreal's 'West Island')
Phyllis Angell had been in the teacher training program there. 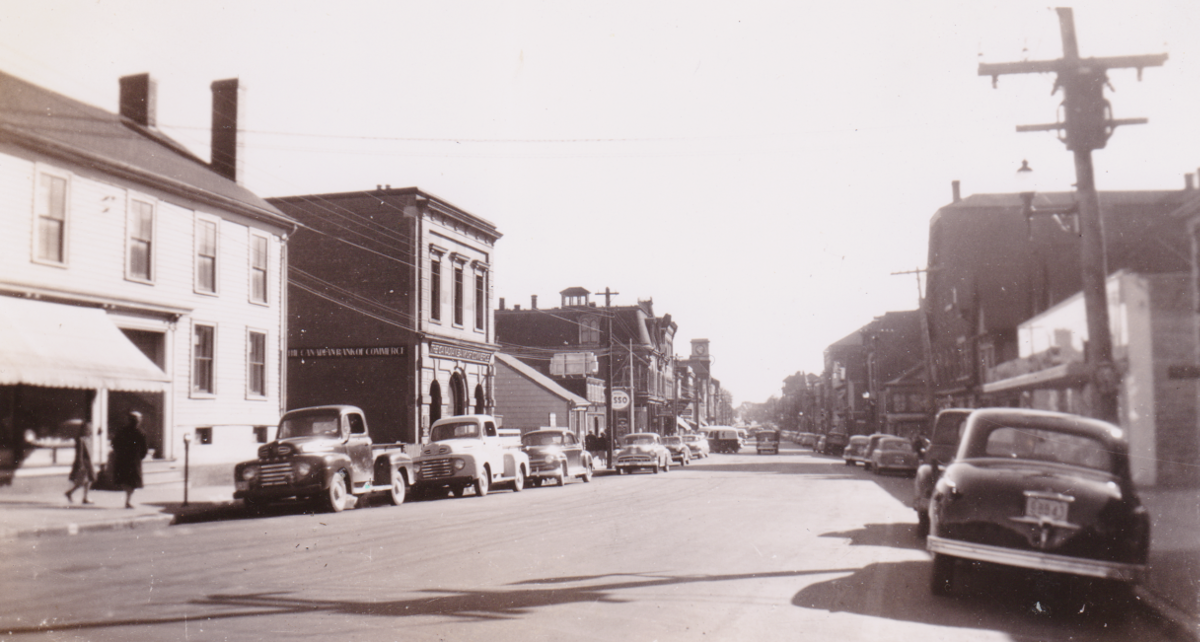 Yarmouth.
At the left is a branch of 'The Canadian Bank of Commerce'. 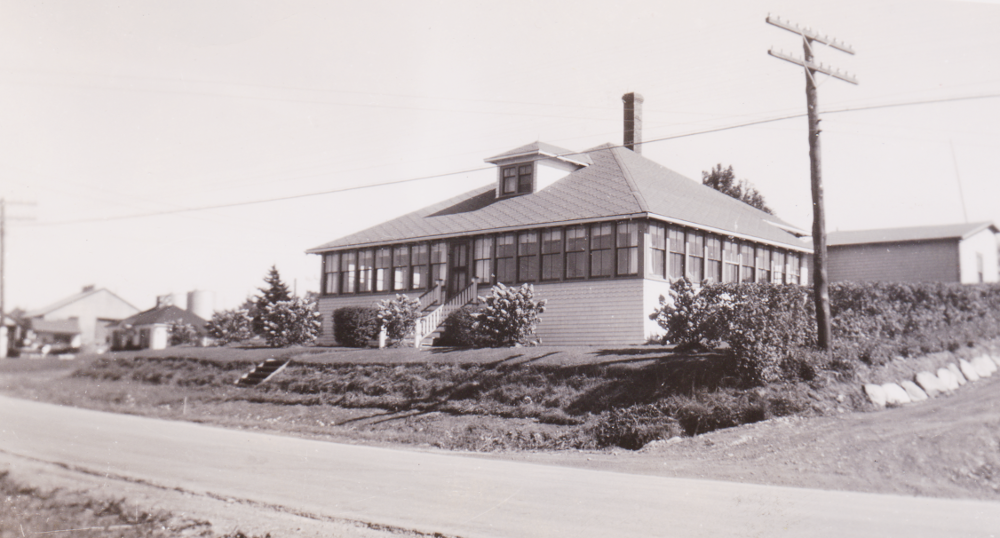 This was the Wilson's home and it overlooked the CPR summer resort, the Lakeside Inn.
In the old days, people had to paint all those wooden window frames on a regular basis.

Below, with the water tank probably airbrushed out, circa 1950. 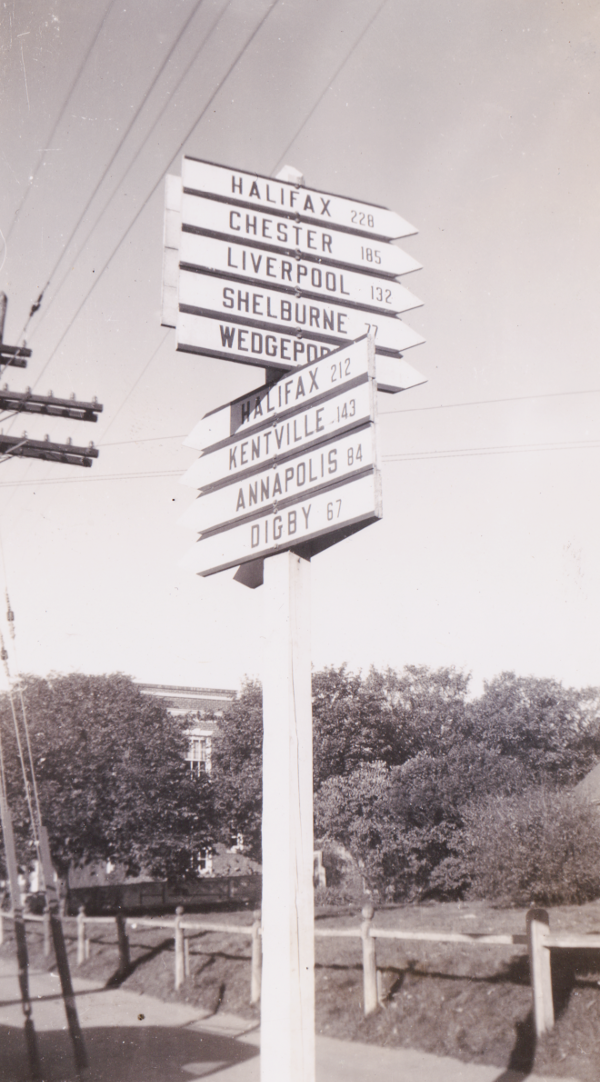 The eternal, rhetorical, geo-economic question I always like to ask my spouse on our vacations all across Canada is: How do you kill a railway?

Answer: Build a road beside it.

The railway-style 'telegraph poles' in this two-railway town are quite evident above and below. 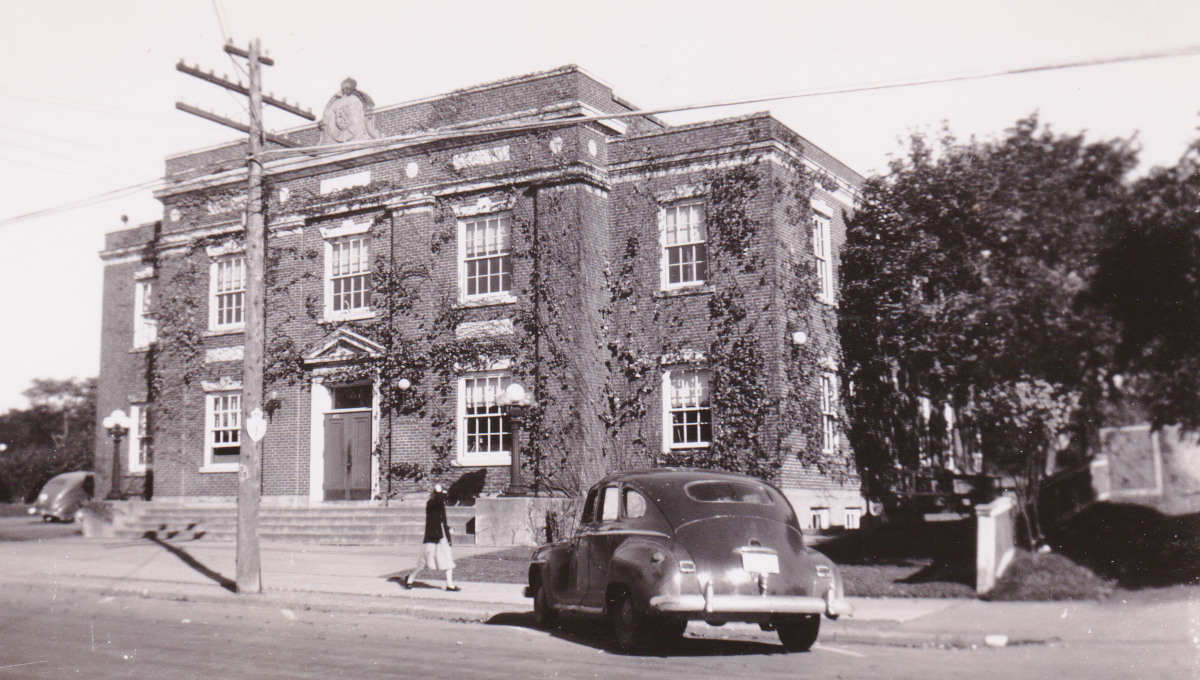 Harold Wilson did his agronomist work out of this substantial provincial office building.

My father records these views as coming from the Osan Cosman farm near Yarmouth.
There may be more than one farmhouse here, as secondary houses were commonly maintained
for the 'hired man' and his family ... and/or the farmer's inheriting son.
Beyond the garden, someone is hanging up laundry.

My father's mother came from a prosperous dairy farm near Lachute, Quebec, and he would have enjoyed this tour. 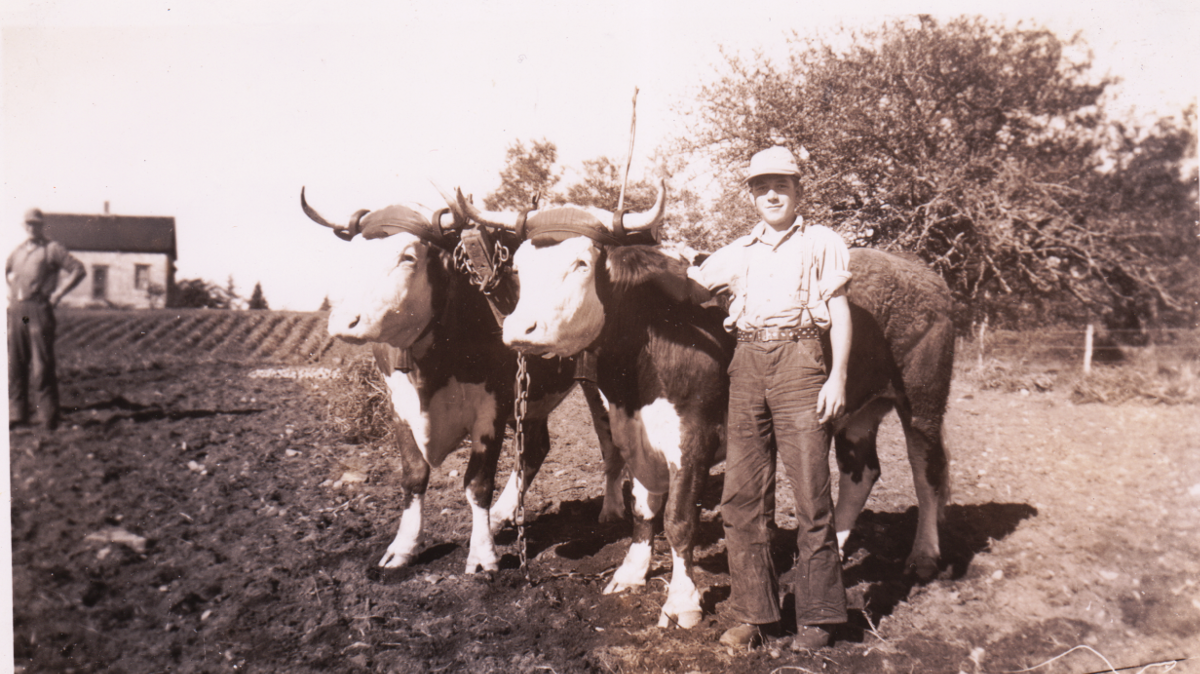 As the 'boss' looks on at the left margin, it is probably his son shown with this fine team of oxen.
Oxen provided slow, steady power for plowing.

Those of us who know tractor-powered plowing blow our minds
when we imagine how quiet it was for farmers plowing with oxen or work horses.

A single-bottom plow in repose in a field. 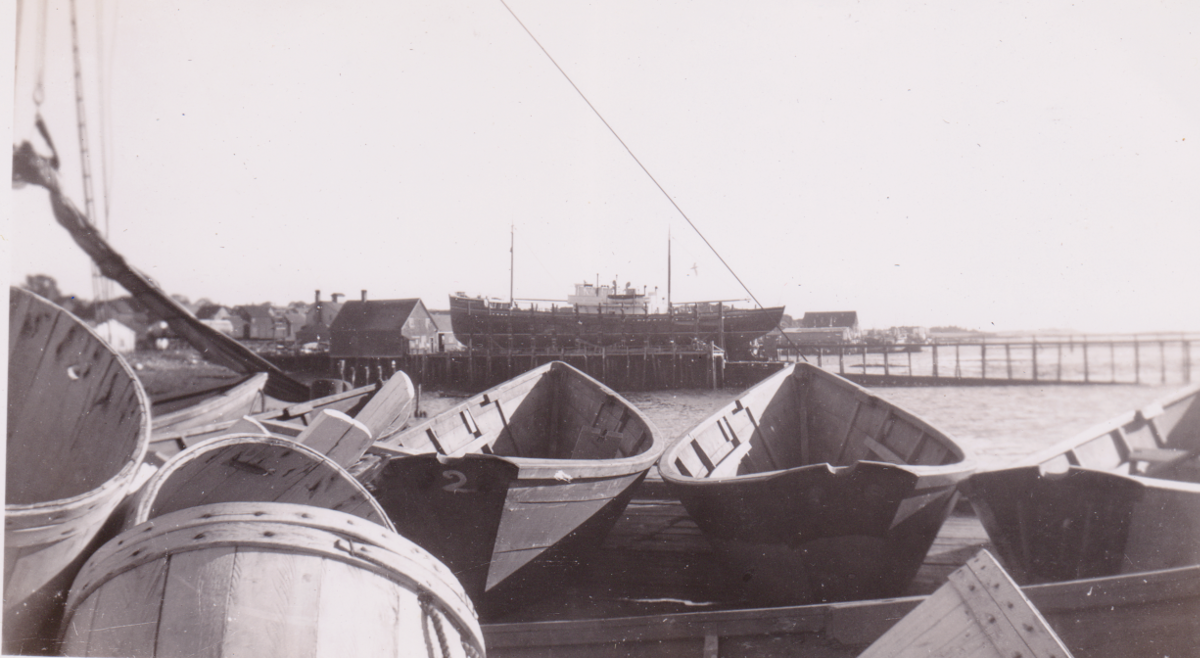 Before the Dominion Atlantic, and Halifax & South Western railways reached Yarmouth ... there was the sea.
Ships from Boston and New York provided scheduled freight and passenger service to Yarmouth.

These numbered dories probably travel out to fishing areas on a larger mother ship.
The baskets may be used to contain fishing nets or lines of baited fishhooks.
In the centre-left distance you can just make out a wooden boxcar. 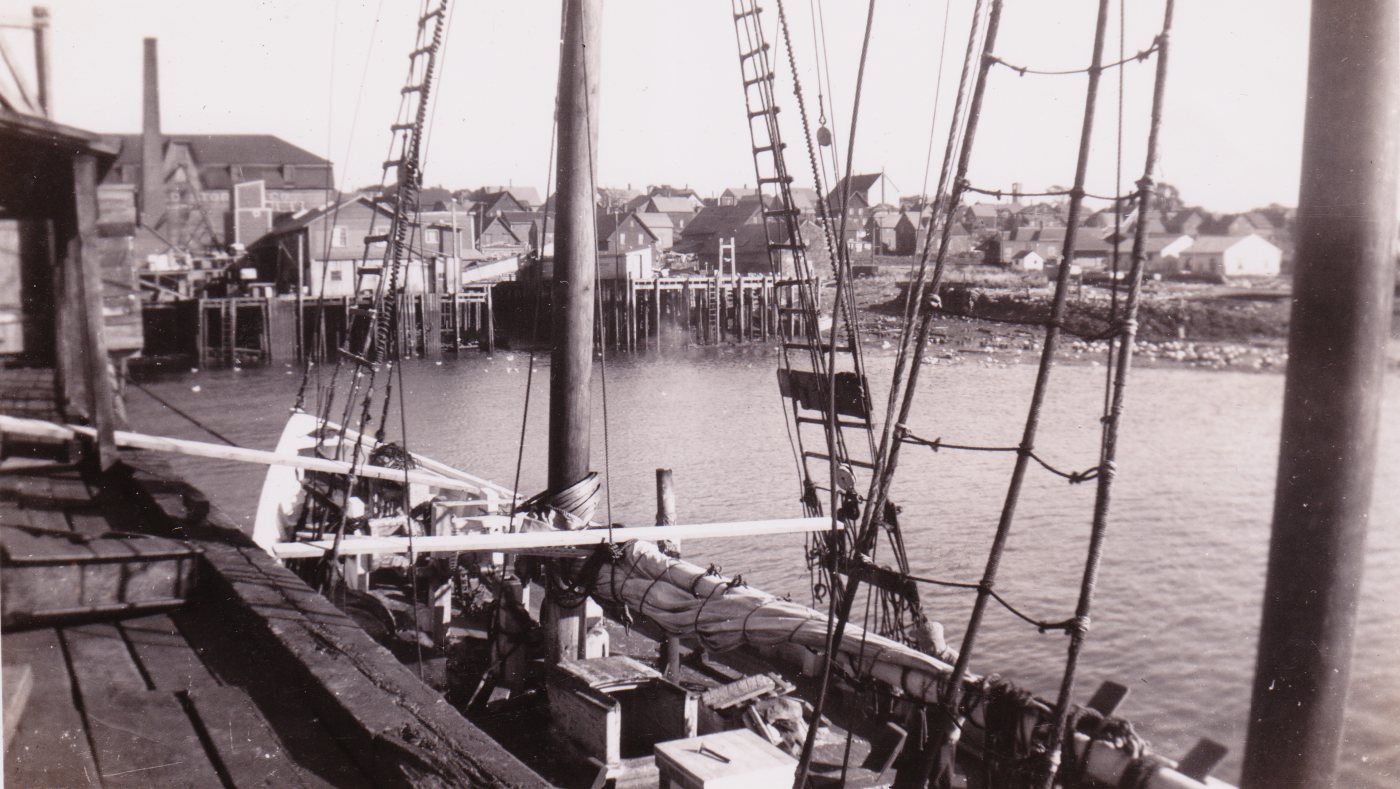 A CNR steel boxcar is easier to spot in this photo.
The large building at the left seems to be a 'cold storage' company. 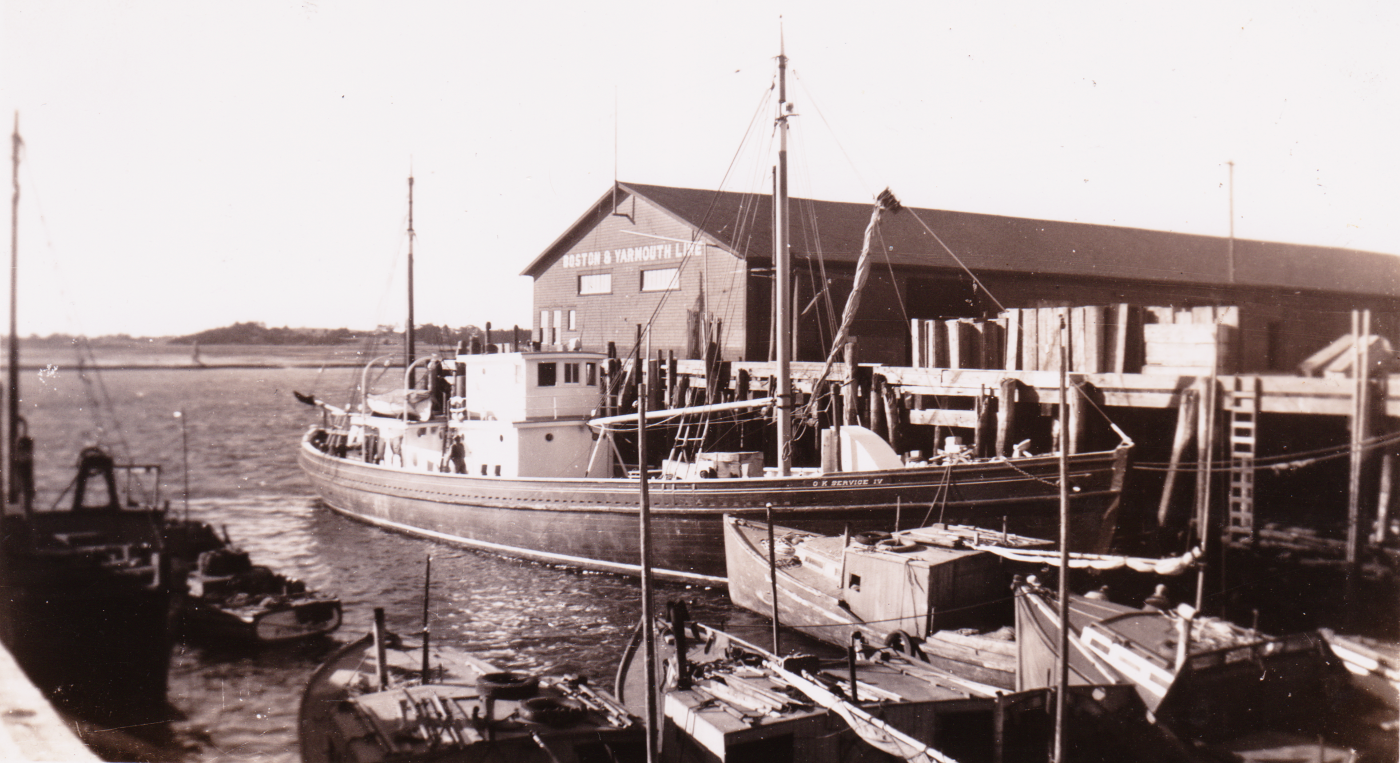 Above, you can see the terminal building for the ships from the US which connected with the railway lines to Halifax and beyond. 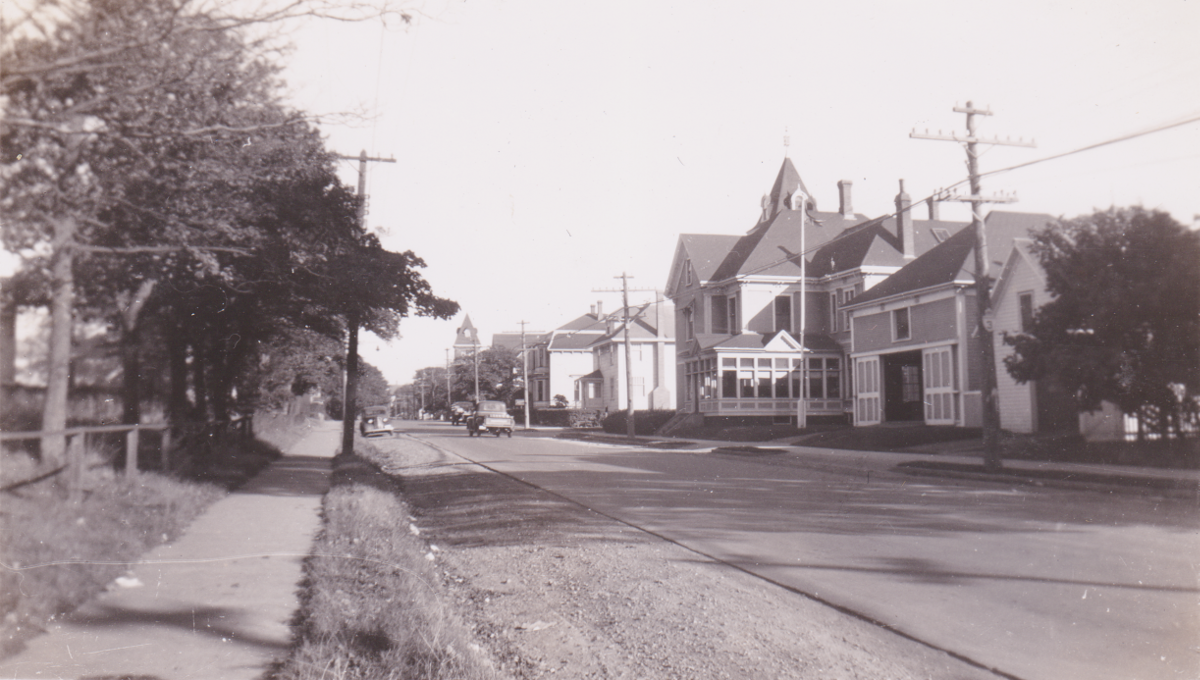 This is the last view of Yarmouth my father presents in his book.
Next time, we'll board the DAR train for Digby and take the ferry to Saint John, New Brunswick ...