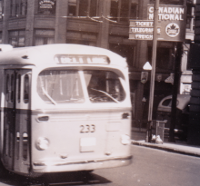 This post features snapshots taken by my father during a vacation taken mainly on the rails of his employer in October 1949.

To recap his trip up to this point ... from Montreal he had taken the CPR short line through Maine to Saint John; the CPR ferry to Digby, Nova Scotia; and he had arrived in Halifax on a Dominion Atlantic Railway (CPR) train through the latter's running rights over the CNR. 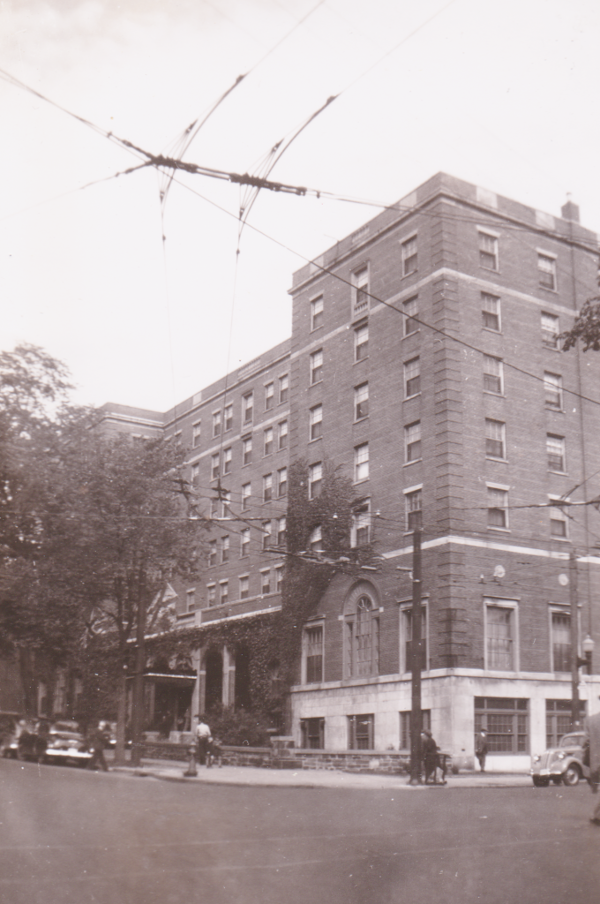 Above, is my father's Halifax hotel - the CPR Lord Nelson. The lens on his box camera tends to fish-eye and blur the corners of some of his photos. This photo nods to a major change in the urban transit system of Halifax.

The last run of Halifax's streetcar system had taken place five months before these photos - back in May 1949. The catenary above is being used by electric trolley buses.

A quick orientation to Halifax follows ...

This view of Halifax comes from the 1960s. Downtown Halifax is at the centre, bottom. Dartmouth is across the harbour. To the right is the Atlantic Ocean, to the left is Bedford Basin - an excellent sheltered area in which trans-Atlantic wartime convoys were assembled.

The Angus L Macdonald Bridge connects Halifax and Dartmouth at the Narrows - it was built between 1952 and 1955. It is a suspension bridge, designed to clear the superstructures of merchant and military ships using the inner harbour.

Here is a historical curiosity ... there had been a double-tracked railway bridge across the harbour ...

The Halifax and Eastern Railway Company twice built a railway bridge across at the Narrows. In 1884, construction started to build the bridge to connect the Woodside sugar refinery near Dartmouth to the Intercolonial Railway's Richmond Yards. This was a low wooden trestle bridge with a steel swing-span mounted on stone abutments. The first train travelled across the double-track structure in 1885 and the bridge was destroyed in a storm in 1891 ...

Caution suggested the idea of building track to Dartmouth by land from the head of Bedford Basin. However, they ignored caution and immediately rebuilt the bridge. It floated away for good in 1891, leaving 23 cars stranded at Dartmouth.

Since then, Windsor Junction has linked the land-based railway lines of Dartmouth and Halifax.

As you can imagine, there was a very high level of shipping activity through The Narrows, particularly for the purposes of assembling wartime convoys. It seems likely that having the obstruction of a railway swing bridge across this busy area would not have been tolerated for long, had the bridge survived.

Quite naturally, most of us are immediately drawn to the 'old cars' shown in historical photos. Besides being sources of nostalgia for many ... the short lifespans of both the in-fashion sheet metal designs, and of the vehicles themselves, are quite helpful in dating photos precisely.

The Isaac-Newton-style water system 'pressure intensifier' on the roof ... and an extinct brand of Canadian department stores provide less precise dating for this October 1949 photo.

My father's first harbour photo is taken from the Halifax Citadel hill and looks up the harbour toward Bedford Basin.

A freighter may be under tow. In the foreground, the row-housing here might post-date the Explosion. Wood-framed dwellings on the land rising up from the harbour were generally swept away or heavily damaged by the 1917 Explosion in the Narrows. This photo has sepia-ed itself. An enduring sight today is the Halifax Town Clock. It was put in service in 1803 - ostensibly to keep the local military forces punctual. Today Parks Canada is responsible for Citadel Hill historic sites, including the clock. 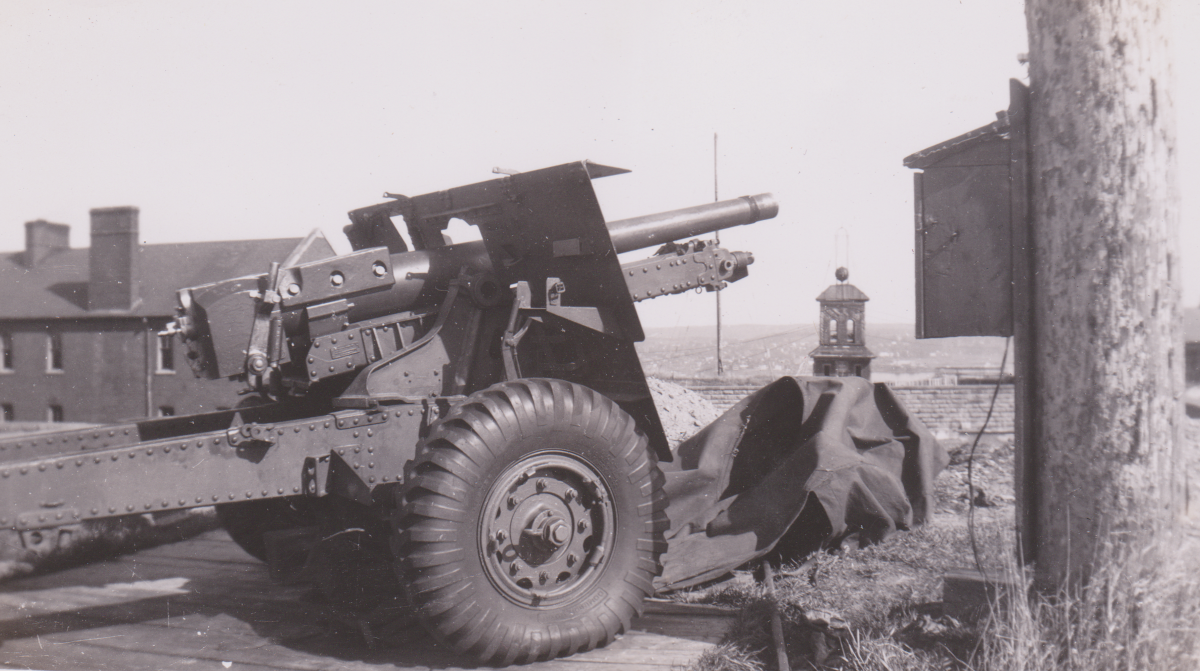 Above, are two systems used to communicate time - guess which of the two is more prized for its precision ...

The British military tradition of the Noon Gun would be accurate enough for normal business and social interactions.

According to a write-up by Dr Randall C Brooks of the Canada Science and Technology Museum, the time ball shown above was completed in 1904 and was probably removed circa 1959.

At five minutes to noon, the ball was raised halfway. At one minute to noon it was raised to its highest point of travel. The ball was dropped by electricity at noon exactly - the electrical current coming from the nearby observatory, where the sun's transit was used to determine the exact time.

During the early 1900s, the Time Ball would provide the more accurate signal for anyone with serious precision needs - ocean navigation using accurate ship chronometers, for example. The visual cuing of the raised ball, and the 'speed of light' nature of the ball dropping sight had advantages over the less precise - but more fun - Noon Gun.

If you are curious about the spotting differences between the two cupola balls above ... you'll notice that the official time ball is constructed to rise and fall within a metal framework. In contrast, the ball on the Halifax Town Clock is not. As well, the two cupolas are different in their construction.

The Nova Scotia Legislature is having some stonework done.
... Somewhere, there must be parking meter fans and 'rivet counters'. 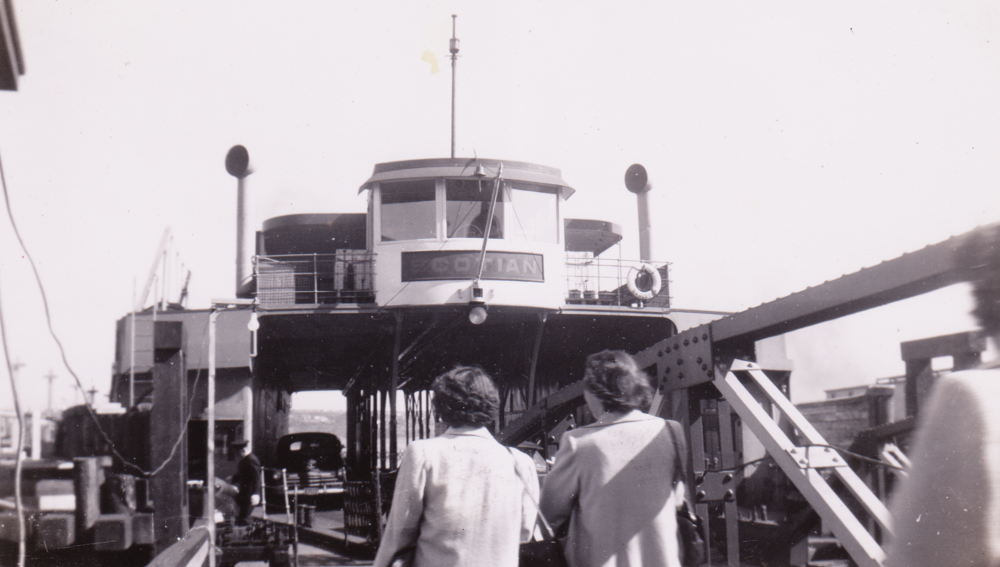 This is the view from the ferry to the Halifax side of the harbour.
You can see the way Citadel Hill dominates the harbour here.

The Dartmouth shore is seen above, also from the Scotian. If you check the 1957 CNR Dartmouth Subdivision footnotes (far below), you'll see that there are precautions for movements over the rail crossing at the ferry ... on the same track as that hopper at the right. 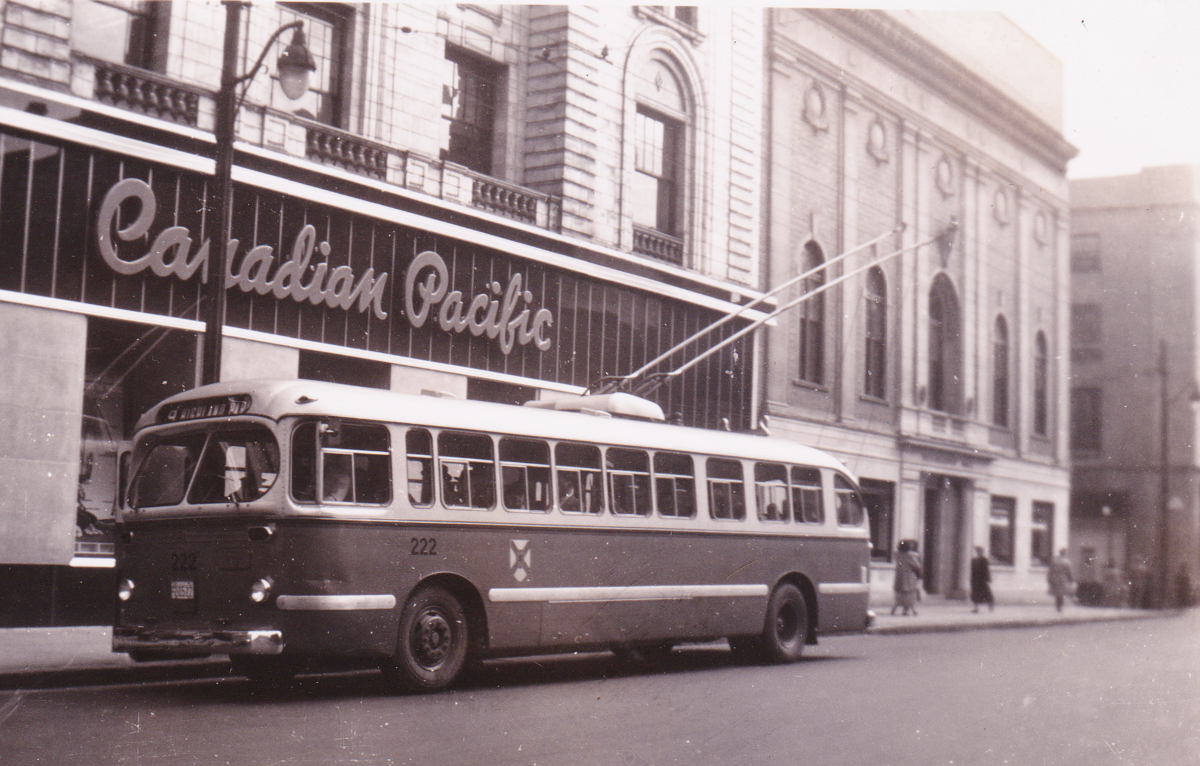 In the post-war mania for rubber-tired vehicles, these Fort William-manufactured trolley buses had significant advantages over the streetcars they were replacing ... The trackwork no longer had to be maintained; the rubber-tired road adhesion of torque from electric motors provided unprecedented acceleration; unlike streetcars, trolley buses could swerve to the curb to pick up riders; the buses were very quiet and smooth riding.

Of course, the children of this transit revolution were themselves dispatched by the march of technology. With powerful postwar diesel engines in buses, the trolley bus catenary would no longer need maintenance. While noisier, diesel buses could operate on any road - not being limited to routes with overhead wiring. 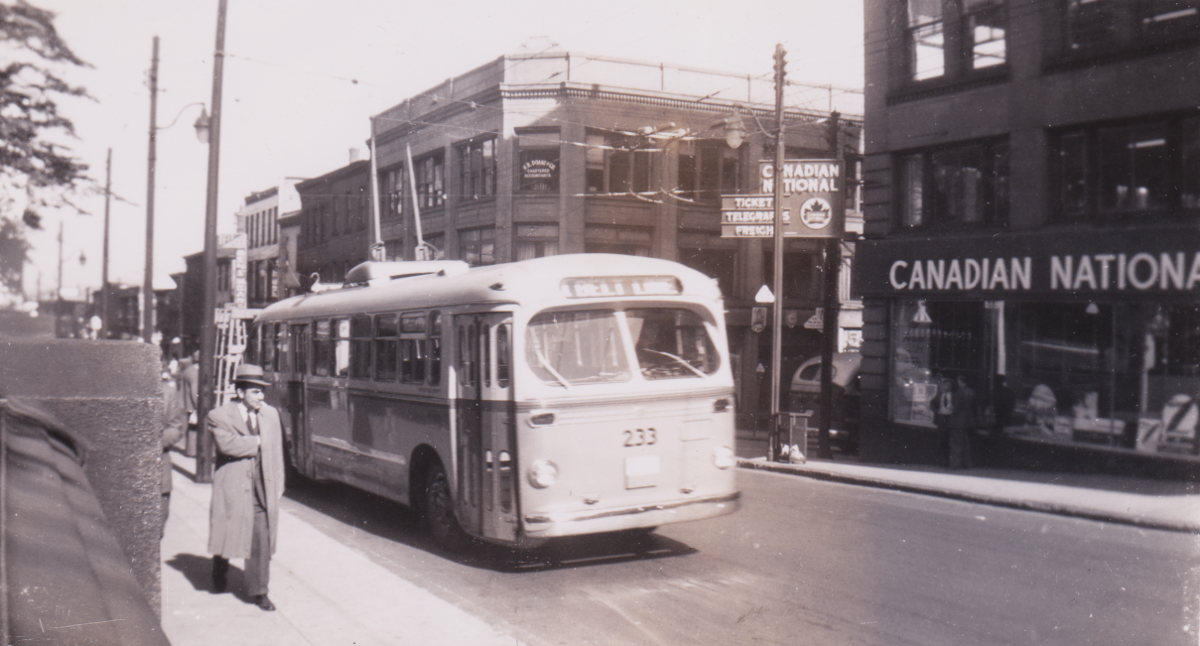 The trolley bus above is just leaving its own 'Belt Line' bus stop.


While looking around for other illustrations to include, I found this image from the government's Canada Handbook of 1946. The hand-drawn marks refer to the Bedford Magazine explosions of July 18, 19 1945. This occurred after Germany had been defeated but before the end of the war in the Pacific.

As you can imagine, military ships participating in ocean convoys needed all kinds of exploding materials - from anti-aircraft machine gun ammunition, to anti-ship torpedoes, to anti-submarine depth charges. These dangerous articles had been located away from the main areas of civilian population ... The Halifax Explosion of 1917 had provided the 'never again' incentive to ensure the safe handling of explosives around the harbour. While many windows were broken in the city, there was no civilian loss of life from the Bedford Basin explosions.

You can easily pick out Citadel Hill. In the foreground, you can see the CNR Hotel Nova Scotian as well as the new Halifax station, CNR yard, and the piers for the ship/rail transfer of military personnel and people reaching or departing Canada by ship.

The local CNR employee timetable pages for the Halifax and Dartmouth areas are provided below. 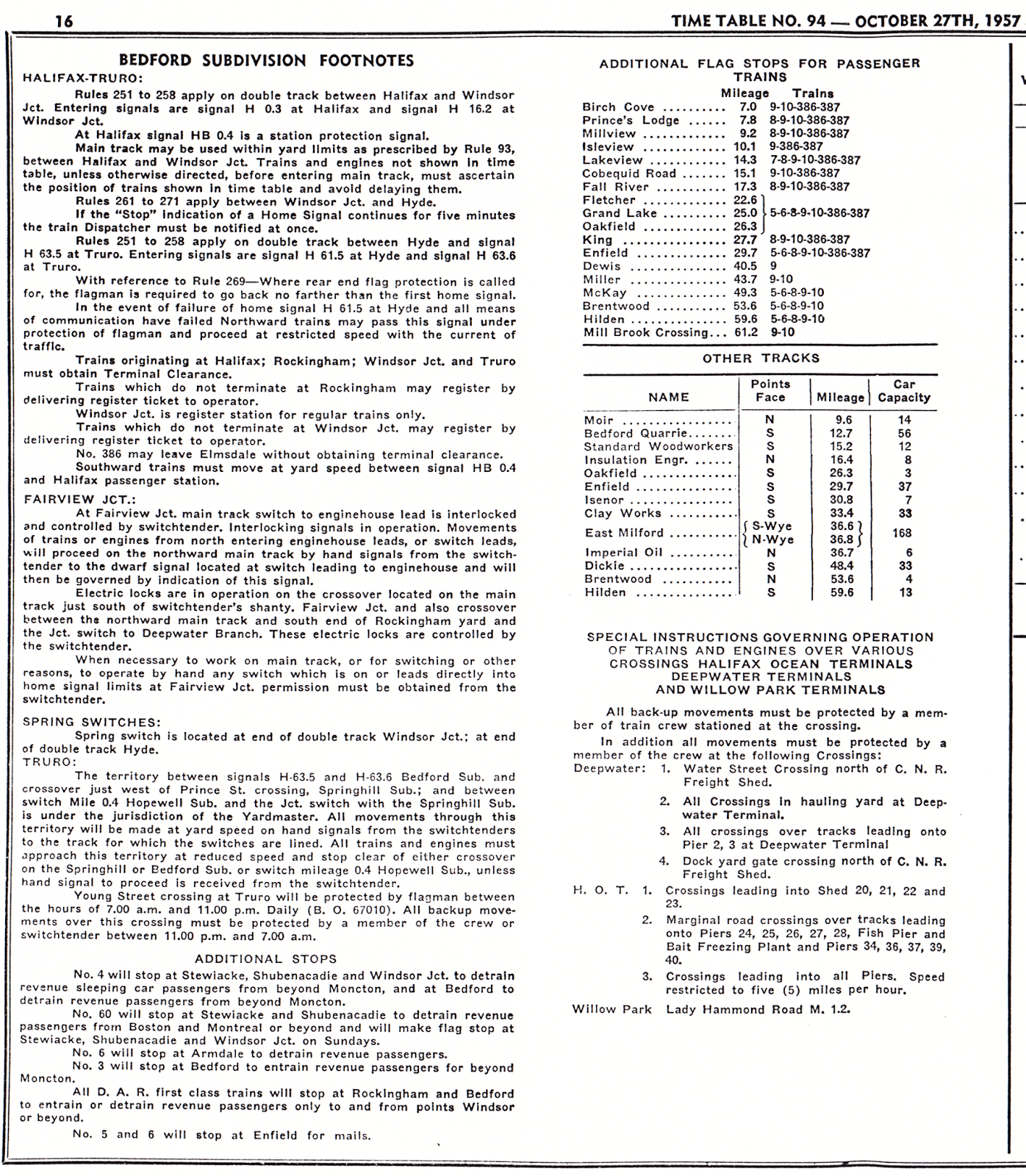 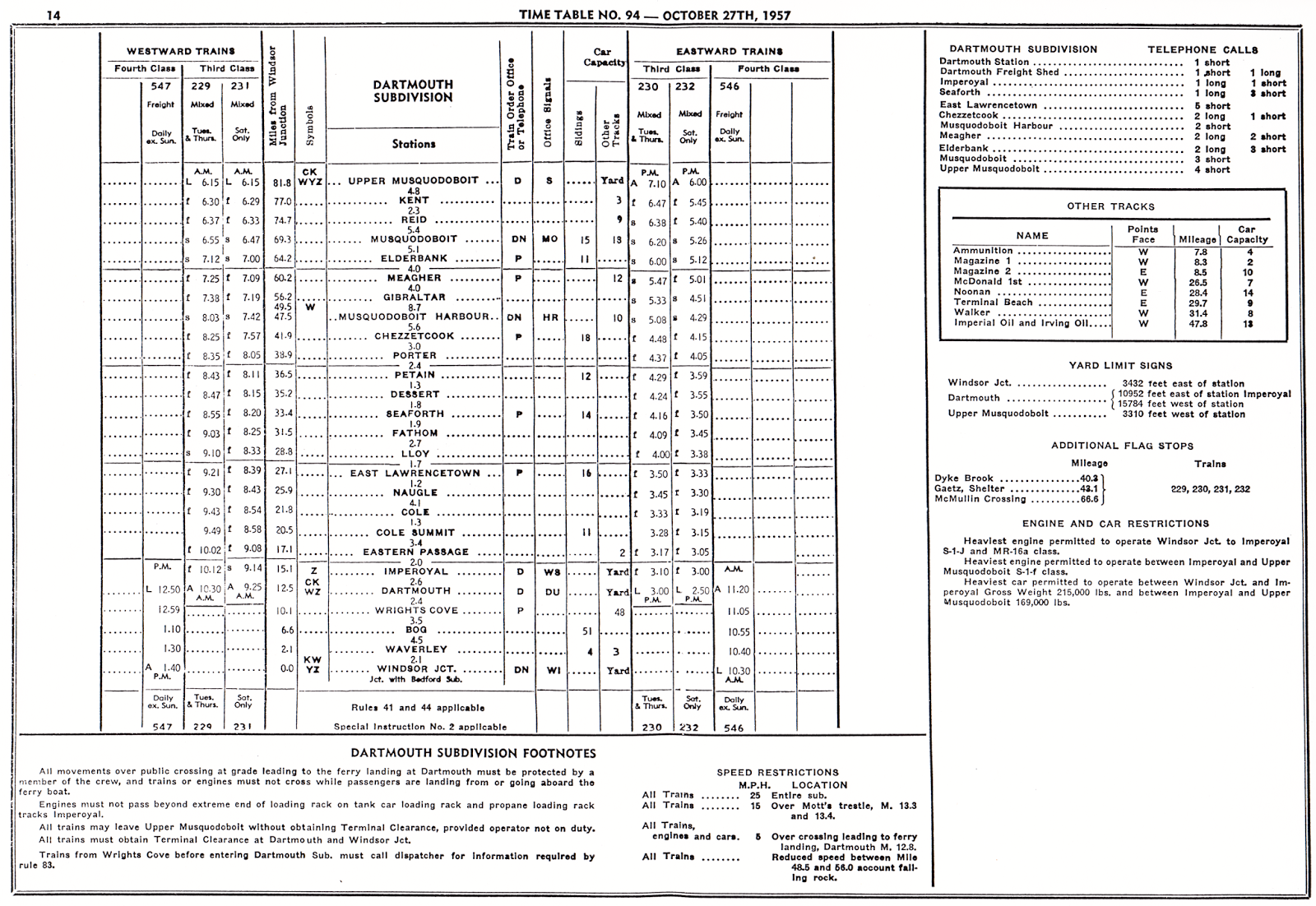