What would happen if commercial airlines flew around the skies with each using its own rules?

In the early days of the industry, that's exactly what they would have done.

This post will look at a letter sent to the Brotherhood of Locomotive Engineers Journal in April 1911, regarding the risks of not using a 'standard code'. The letter is by WH Morris of Division 236. Today Division 236 is based in Vancouver, Washington.

The Era in History

This first image was taken within a decade of the letter, showing motive power built at about that time.

Engineer Walt Stevens and fireman AC Larson in Northern Pacific Mikado 1693, built in 1910.
Each is posing with a hand on a control. The photo was probably taken with flash powder.


This is a letter which was written by an engineer probably working for a subsidiary of the Union Pacific. He is spending a good part of his time running on Northern Pacific rails .

I can give you a few contemporary illustrations of the work, using Northern Pacific equipment on that same line from that same time. So that is what you will see. 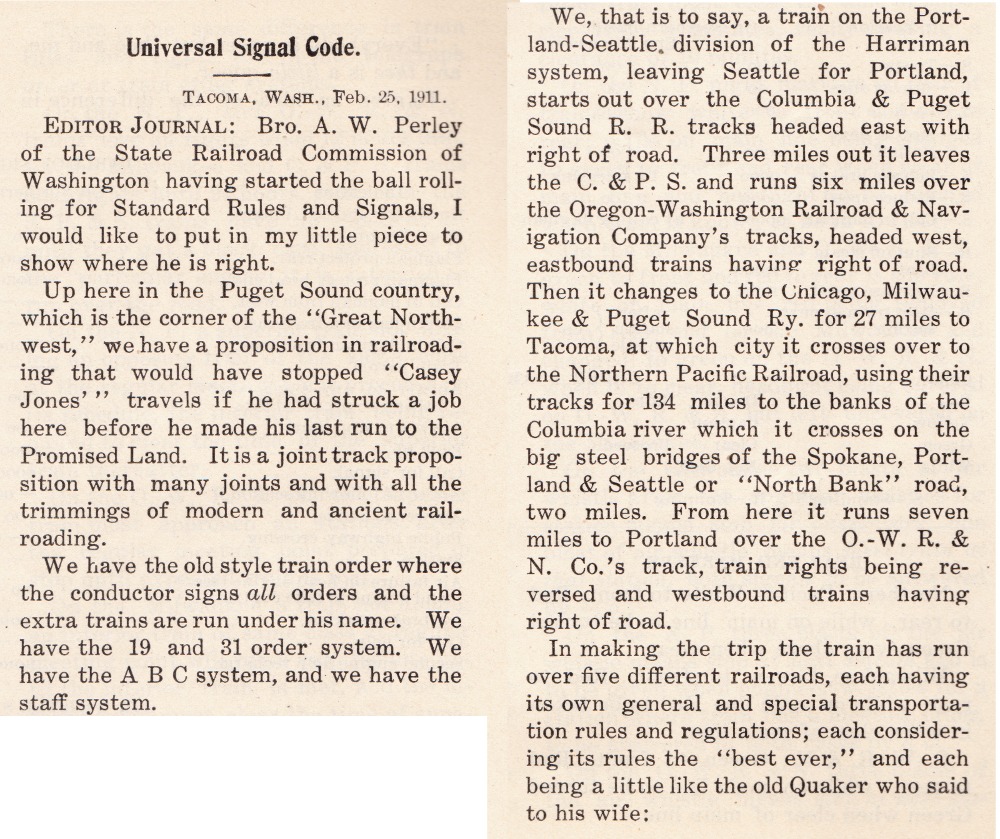 All of the railroads mentioned above are listed in the Statistics of Railways in the United States; 1909; Interstate Commerce Commission. The shortest is 57 miles long. The Oregon-Washington is a Union Pacific subsidiary. The trackage described is shown in public timetables as part of the UP's main routes - although much of it is actually Northern Pacific track. Maps and timetables follow ... This is a professional journal which often hashes out questions and problems with operating rules. The 'Train Rules - Standard Code' column follows the letter.

The map below (from 1928) shows the section of track described between Seattle, Washington and Portland, Oregon. This map seems to support the idea that the Great Northern, Union Pacific and Northern Pacific all operated trains over the same section of the latter's main line.


Looking at the Northern Pacific (1911) and Union Pacific (1910) public timetables which follow, you'll see many of the same station names used. You'll also notice that the passenger trains used the same series of numbers - 3xx. The train numbers dovetail with no duplication between the railroads.

It seems likely that the Northern Pacific employee timetable would display these trains side by side.

The photo above shows a Northern Pacific freight crew at the beginning or end of the day at Auburn, Washington in 1912. There are many details to enjoy, but notice the backup whistle on the caboose's rear platform.


The Standard Code of The Association of American Railroads of 1940 is a four inch by six inch book which is almost two inches thick. It includes the progression of operating, block signal and interlocking rules put forward by committees of the Association between 1889 and 1938. The oldest version of any given rule ... is following by its next version ... and finally ending with the current version.


I could never imagine myself out flagging as a new brakeman, on multi-track territory at night, and correctly identifying when I, myself am getting whistled back ... it's the stuff of nightmares ... so let's look at the whistle signals on the page at the right instead ...

You can see that the Standard Code of 1940 includes the whistle signals used in 1906. Most people would recognize the 14 (l) whistle signal used at public grade crossings. Notice that it ends with a short sound in this version of the rules. 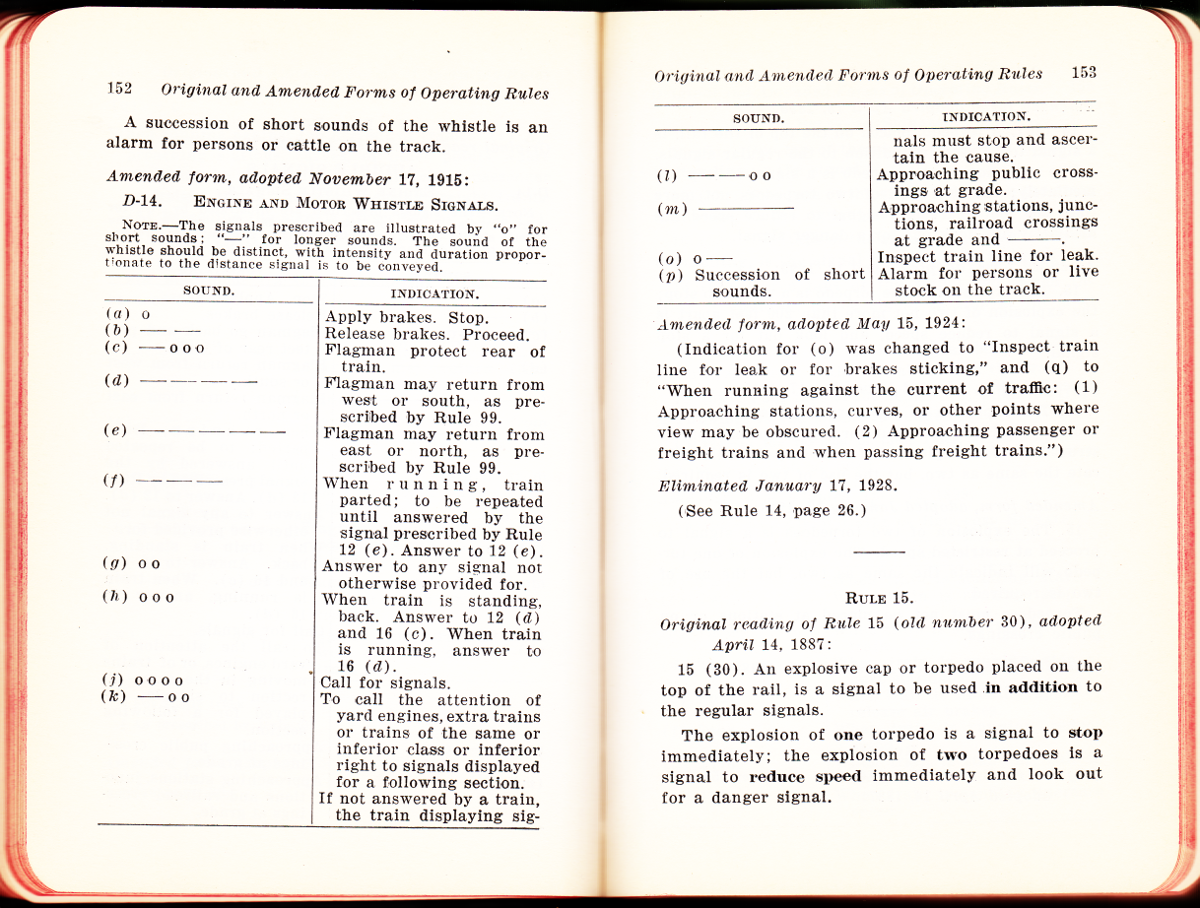 On the next pages comes the 1915 version of the whistle signals and our 14(l) is still the same.

The letter from Brother Morris to the BLE also raises the lack of consistency regarding the rules for the use of torpedoes. (A 'torpedo' was an 'explosive charge' - long before it was an explosive charge propelled under water at an enemy ship.)

Starting with Rule 15 of 1887, above, and continuing on the pages below, you can see that the use of torpedoes gave them a lot of work ... After trying one procedure, there were problems or accidents and this caused a review of the process to try to improve it.

In 1928, they decided to avoid placing torpedoes where the general public was nearby. While this may have been to prevent tampering with life-saving warnings ... you can imagine it may also have been because of injuries sustained by bystanders which caused this rule to be modified. Bell cord signals! Before radios, a dedicated air pressure line was used by the passenger train conductor to signal the engine. Before this air line, there was the bell cord.

The bell cord was strung on the outside of the full length of the passenger train. Pulling on the cord was supposed to ring a bell in the engine cab. Keep in mind that compressed air on a train didn't become common before the air brake was widely in use.

In February 1874, a passenger train westbound from London, Ontario caught fire ... and because the bell cord had not been connected (for practical reasons) ... the train couldn't be stopped immediately, and ten people burned to death or died later of their injuries. As usual, there were many other contributing factors - movable kerosene lighting inside wooden coaches, just as one example.

Again, you can see how the rule evolved over successive reviews by the successive committees. 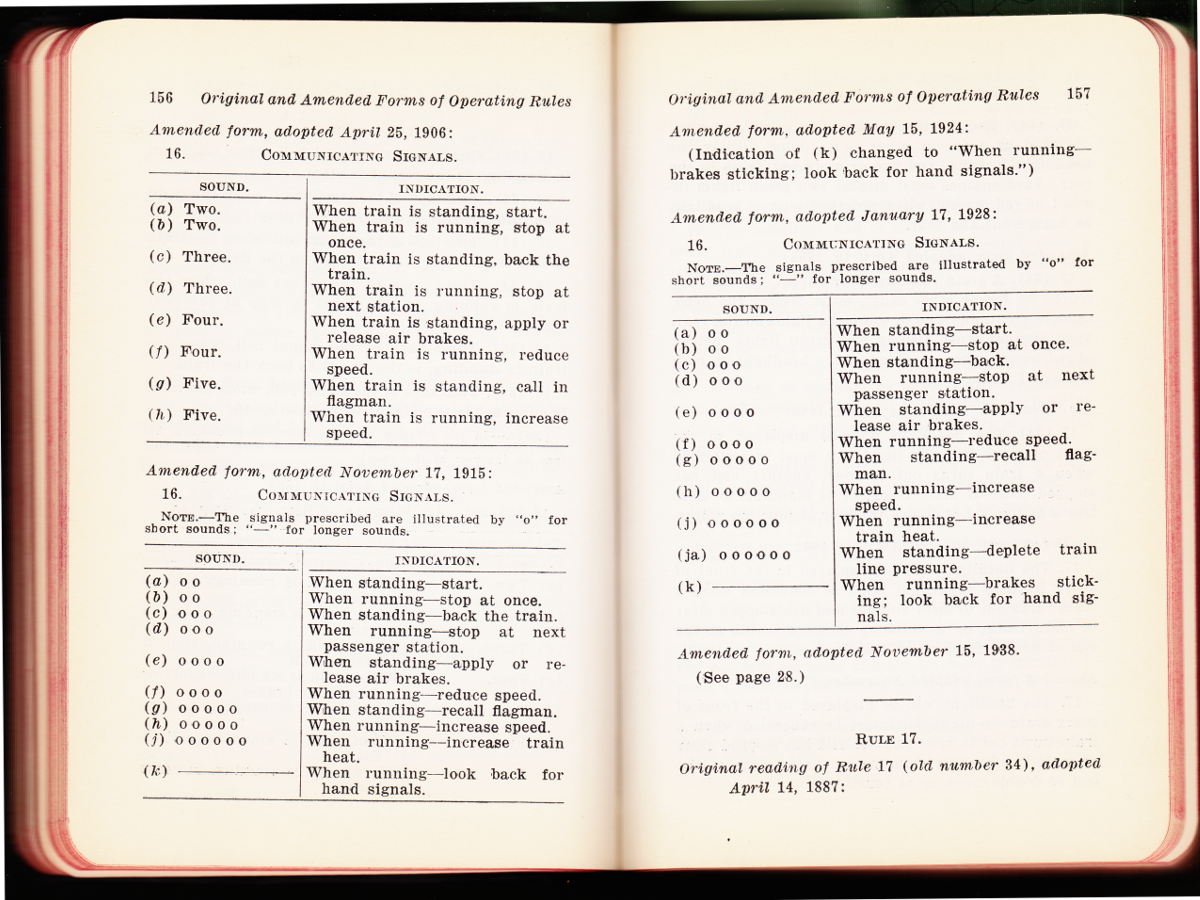 To sum up: Brother Morris had a good point that problems are created when crews are forced to operate over territories such as his where there is such a diversity of rules to cover the same general process. There was good justification for a 'Standard Code' and for railroads to adopt approved, standardized rules.
*  *  *


In 1912, at Yakima, Washington (shown at the east side of the map above) an eastbound NP passenger train has overtaken an eastbound freight. Most of the splintered wood you see was the caboose. We can probably think of ten possible rules violations which may have caused this problem, including some not involving anyone on these trains.

As humans will always make mistakes and will always forget things from time to time, it is a good idea to eliminate unnecessary confusion by making necessary rules simpler.


From the same edition of the Journal (some bound sets of these can also be seen on archive.org) comes a letter about efforts to change a railroad practice which increased the probability of crews making mistakes and forgetting things ... long hours and inadequate rest. 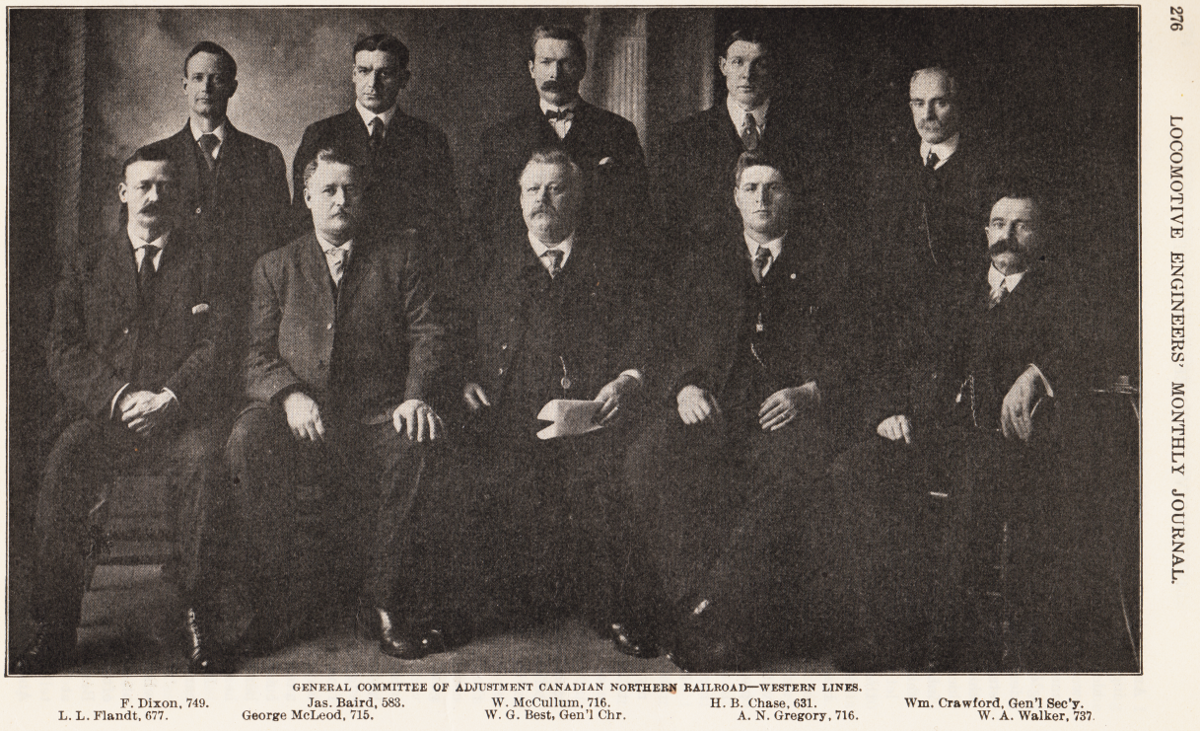 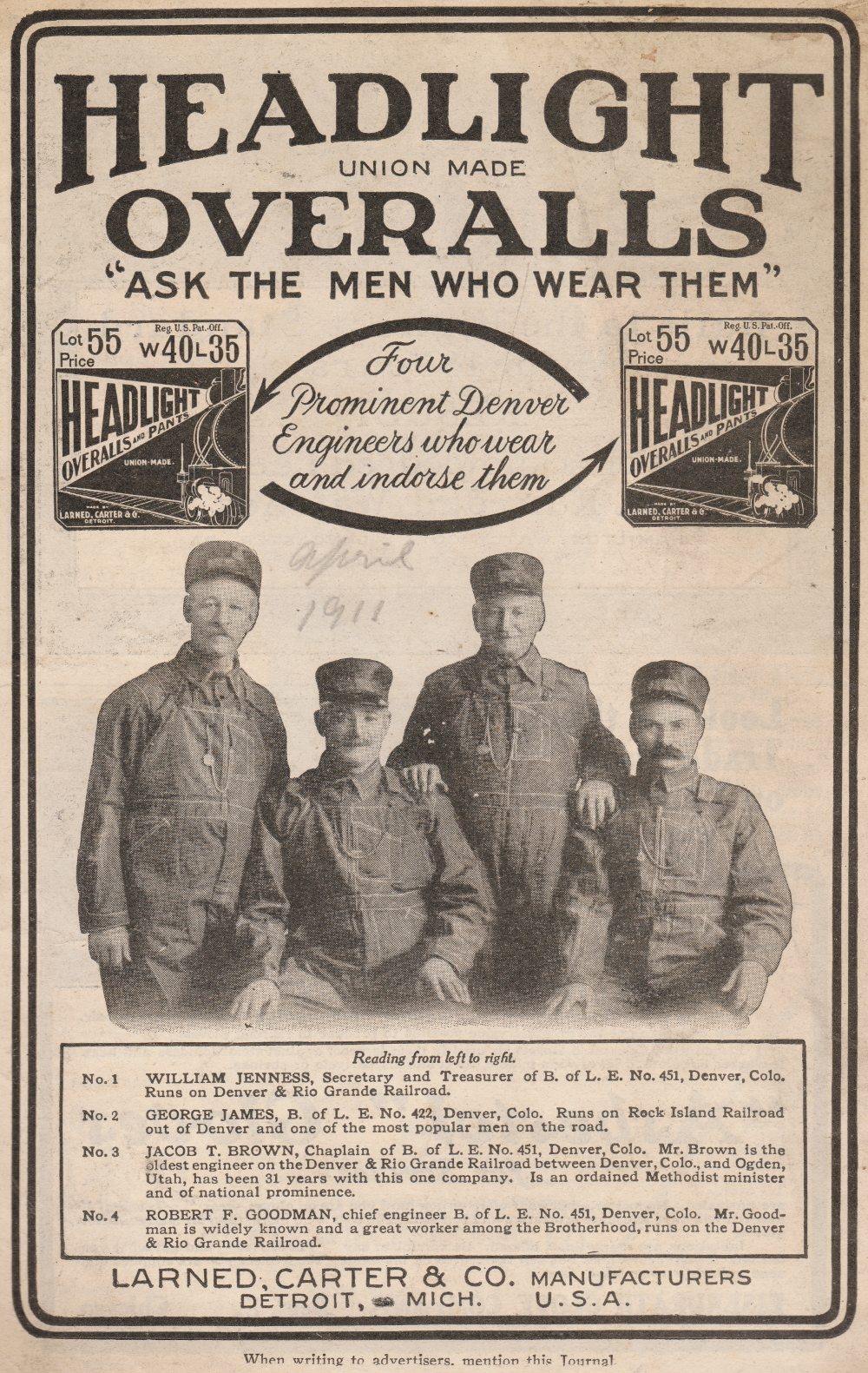