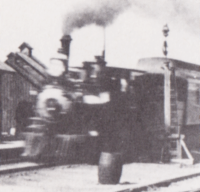 Years ago, I purchased this roughly treated old journal. The ads are perhaps more interesting than some of the professional/technical articles on Northern American and British subjects. Bound copies of this journal may be found (without advertisements) at archive.org.

A simple but important safety appliance - particularly on the main line - was the switch target. Below are views presented in a committee report of the Roadmasters' and Maintenance of Way Association Convention at Chicago in September 1910.

The committee members fail to resolve the question. Their perspectives illustrate the difficulties encountered when trying to standardize the practices of individual railroad companies.

From other sources I have inserted a few illustrations of targets. 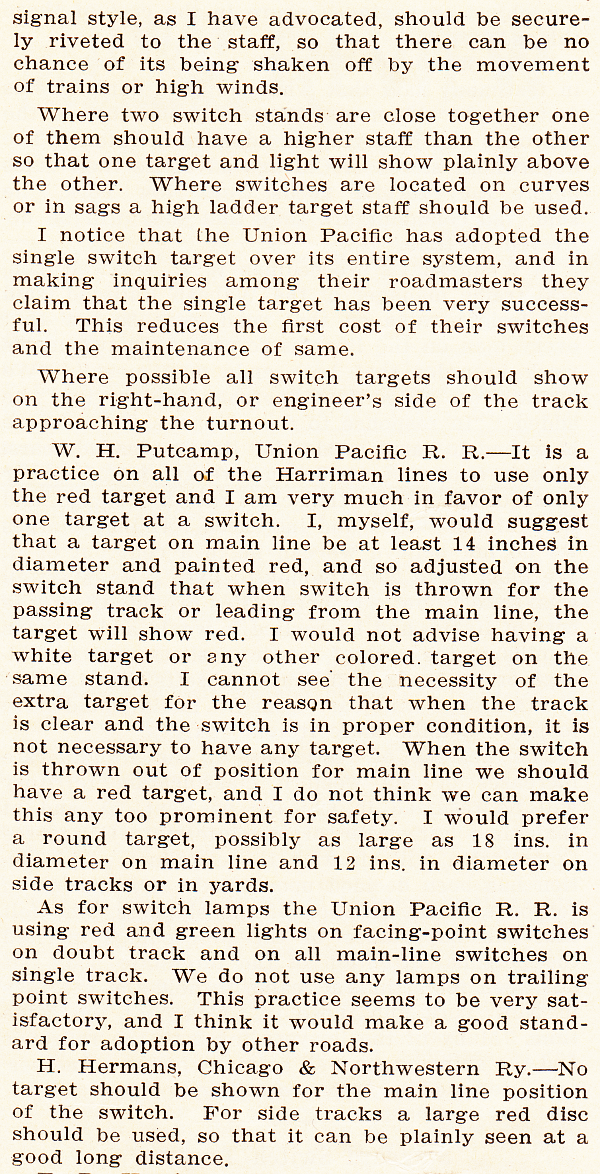 A break from these deliberations for illustrations of some targets ...


Here is a British Home (absolute) Signal of the 1850s. The book doesn't elaborate on the purpose of the two rotating target shafts ... and whether one is linked to a switch or not. This may be a sampler which displays two pieces of equipment together - but not in a real operating combination.

At the right, the basic principle of a 90 degree shaft rotation which displays the target at a right angle to the track to indicate a restriction, or no target to indicate clear track ('normal' position) ... can be seen.

At the left: Considering the difficulties of finding switches in the dark, possible disorientation, and the added dangers of operating by night ... the desirable idea of always displaying one of two lights by night - a restricting indication or a clear indication ... is also demonstrated.

Leaving the earliest targets on signals or switches ... and on to more modern switches ...

Near Huntsville, Ontario in 1951, are the artifactual remains of a stub switch on a switchback.

Switchbacks were track zigzags with tails - the camera is over a tail - which were used to ascend steep grades. Switchbacks were relatively rare on Canadian railways because a train had to stop on the tail track and reverse direction onto the next segment of track.

To increase the 'run' for a given 'rise' ... loops or spirals of track were more efficient than switchbacks because trains could save time, and maintain their momentum up the grade, without having to stop ... and they could avoid the derailment risks of extra stops and extra switching at each tail track.

Above, to present a warning where safety is more likely to be at risk - a target is presented to a descending train when the switch is set against it.


At the first station at Sudbury are two nice examples of old switch targets on the early CPR.

The main track switch by the locomotive's tender shows the single target (with two holes) for daytime and the two-colour switch lamp for night operation. Both are elevated so an approaching engineer can know for certain as soon as possible if the switch is lined 'normal' for the main track ... or for a diverging route.

The chevrons of the target in the foreground cannot be mistaken for the main track target. They apply to the secondary route in front of the station and show whether or not it is set for a diverging route.


At Owen Sound, Ontario, circa 1890, is a three-way hand-thrown switch with an interesting oil-burning switch lamp. Switch stands and lamps of simpler construction can be seen in the distance.

With three possible routes to and from this switch ... it remains a question how or if the switch lamp was used to precisely communicate the exact lining of the switch to approaching movements from both directions. 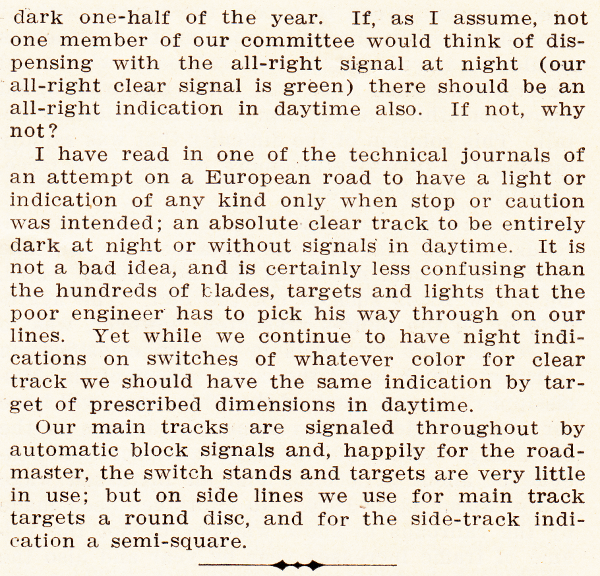 
Above, are shown some standard switch targets. Whether there is a need to display a second target - when the switch is lined 'normal' for the main track is what the Roadmasters are debating. As the diagrams indicate, most or all of these switch stands are designed so a switch lamp can be fitted for night operation.

It seems likely that the general improvement of railway technology and practices eventually eliminated the desirability of having a daytime target for 'normal'. In the early days, there were many manufacturers of equipment and there may not have been iron clad traditional practices recognized by all operating employees. Trains travelled at slower speeds on the early, primitive track structures.

Once railways had employed a few generations of track maintenance and operating employees - rules and operating practices would have become better established ... eg. 'our switches are in always in normal position when lined for the main track'.

As train speeds and traffic density increased, engine crews became busier. It would have been simpler to watch ahead for rare, prominent red switch targets of 'danger' ... than to watch the track ahead for all the other possible signs of danger ... and also to search ahead to identify every single approaching switch target and to confirm that it was safely lined for the main track.

Advertisements from The Railway and Engineering Review ... 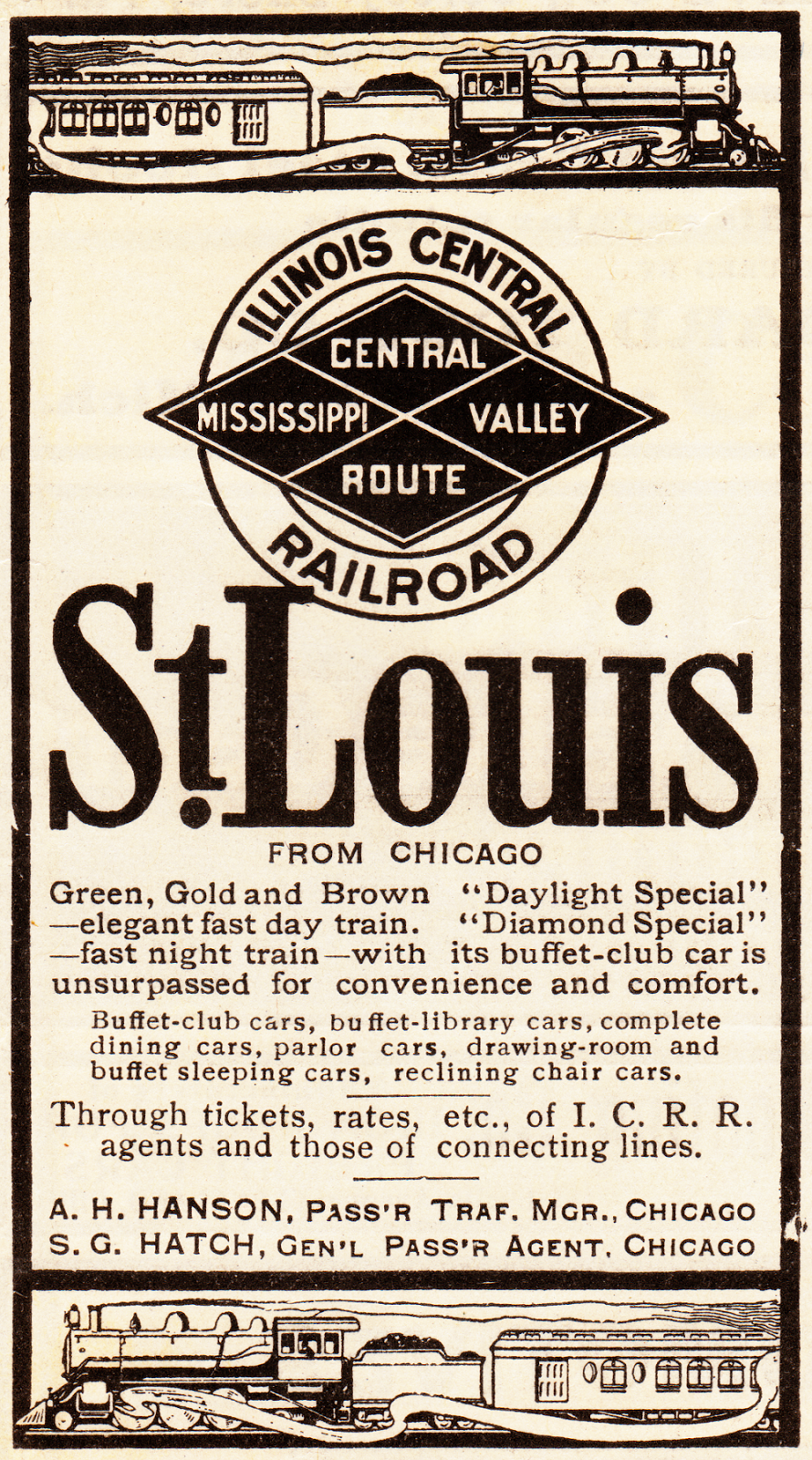 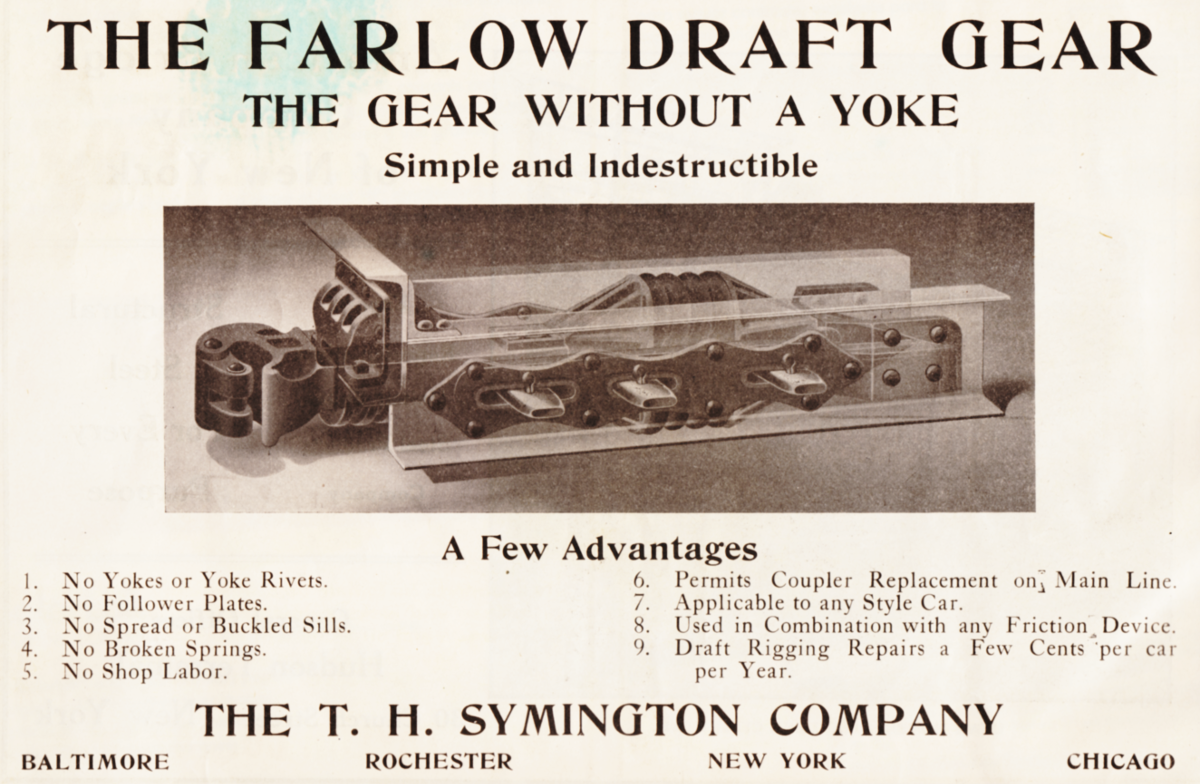 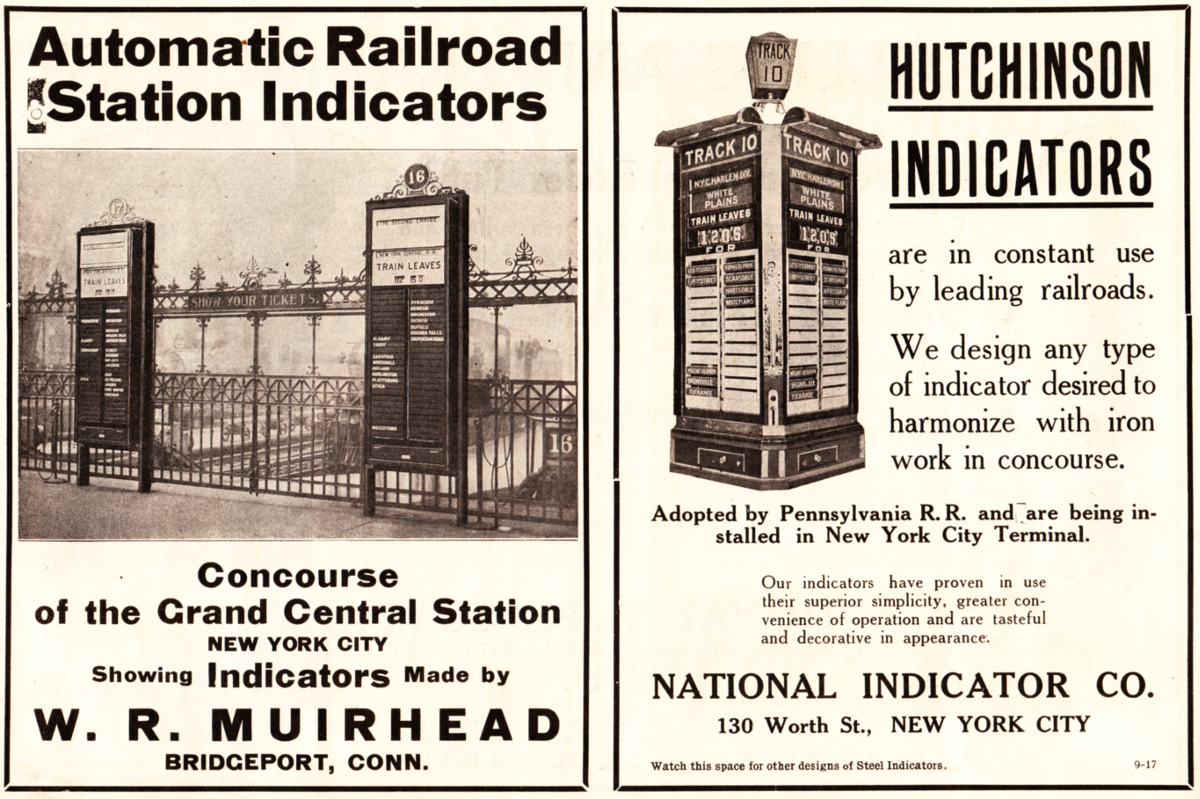 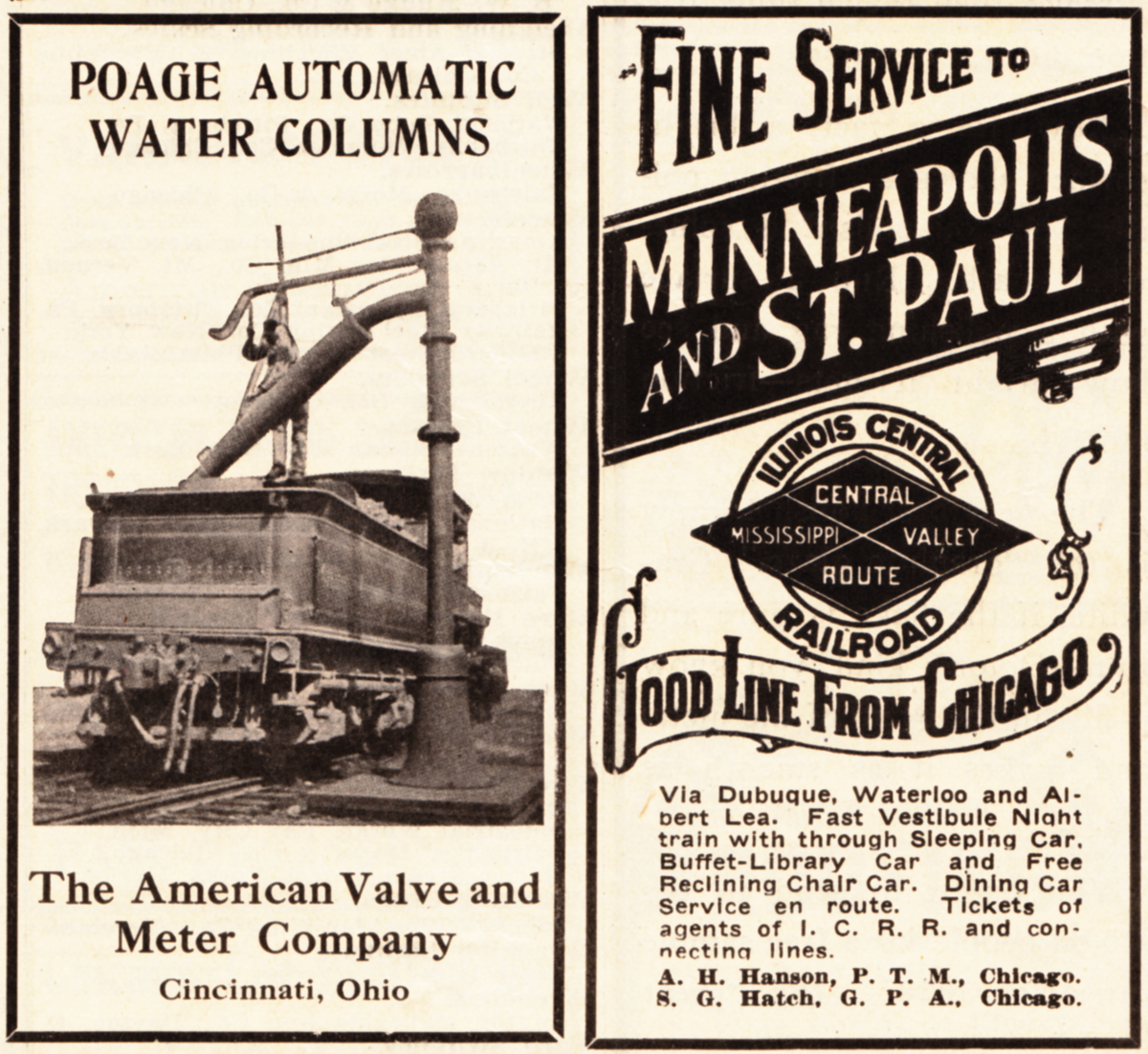