Near London in 1992 and the Loop Line Transfer 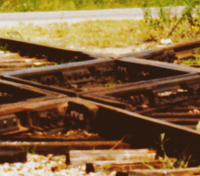 One never knows when pulling on a thread of the historic, tattered railway tapestry will unravel a mystery from the dawn of time.

There's no need to replace an 'expensive' mileboard when you can simply nail a modern sign to it.

The sign isn't worn out - and neither is the name! 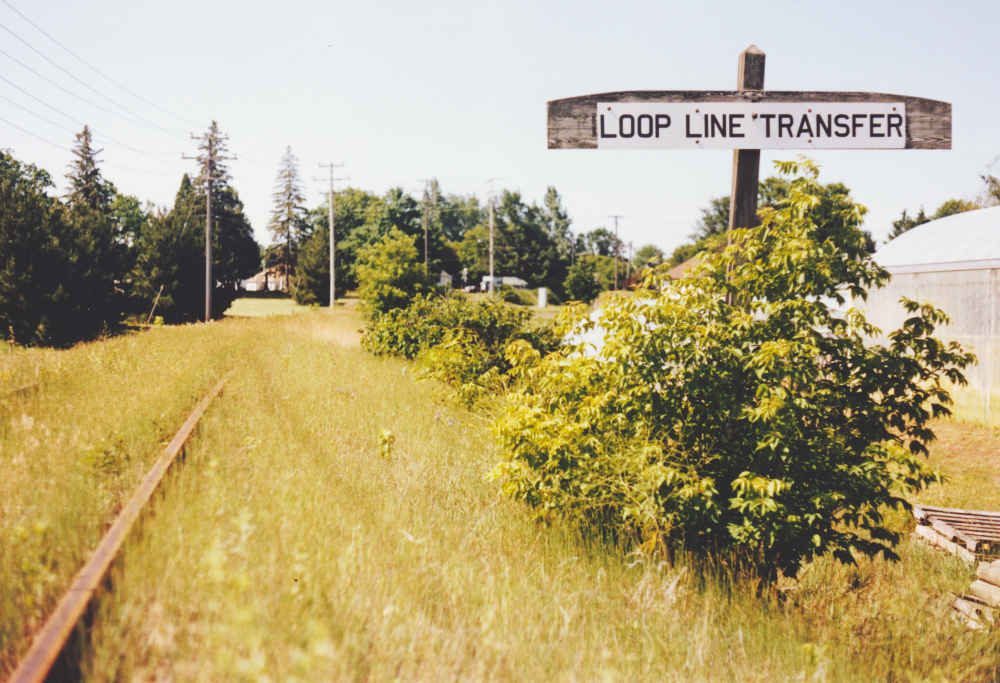 Years before taking this entirely unattractive documentary photo, I had been producing rather useless computer databases using employee timetable data. I had come across the name shown on this mileboard on many occasions and I always wondered what this mysterious and wonderful Loop Line was. I took this photo because I was excited to find that the name actually existed in the wild! 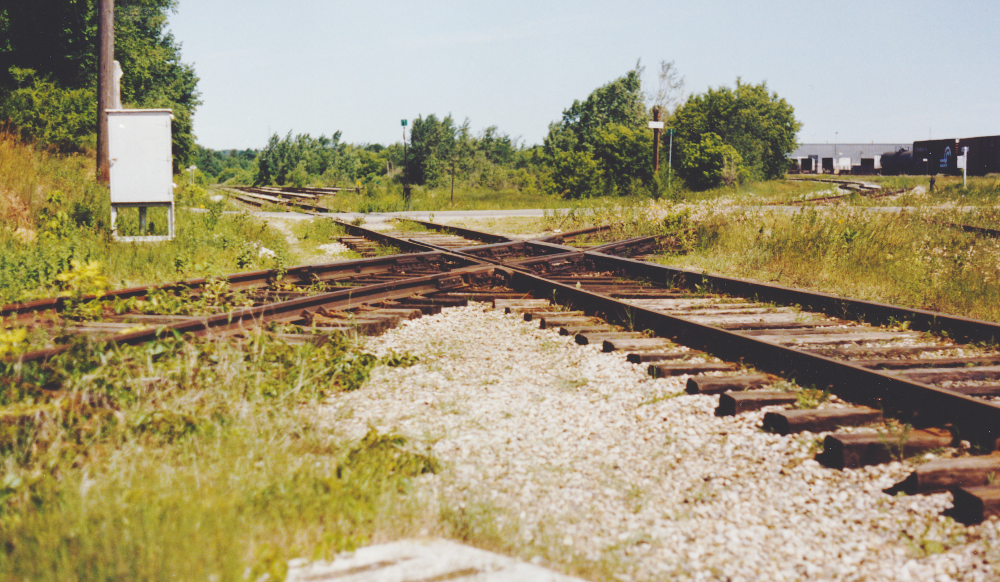 Here's another photo taken of 'something significant' for documentary purposes.

'Tillsonburg. Noon. Diamond near former CPR station on King Street. Looking North. Small yard is visible in background. In foreground, base for signalling device or interlocking' says my note.

There will be no final perfect answer to this line of inquiry. Some documents will follow.

Above is the employee timetable for the CPR subdivision through Tillsonburg, complete with subdivision footnotes.

Below are the employee timetables for the CNR subdivisions through Tillsonburg, complete with subdivision footnotes.


If this is too much data, don't worry - I brought some maps along (far below).


Trying to find an illustration of the area to make this flat-wheeled drag of a posting more interesting, I accidentally found the following segment of a public timetable from 1876.

To put you into the era and the railway, here is a freight locomotive built in the GWR shops in 1870.

What is a Line?

A main line is, well, linear.

An 'air line' is, I think, supposed to be both direct and level - as if someone was planning the railway by drawing a straight line in the air.

A 'loop line' is, I think, supposed to provide an alternate route between two points. Essentially, when the loop line is completed, the railway has 'another way to get back' to where it started.

You might interject that there are other definitions of air line and loop line and I would quickly agree with you.

'Air line' can also be an advertising tool, It may suggest that great effort has been made to avoid curves and little hills and sags - which will cause the passenger (or investor) lurching discomfort.

When the builders were finished, the Great Western's main line connected John A Roebling's international Suspension Bridge at Niagara Falls through Hamilton and London to Windsor with a ferry to Detroit. You will see that the Loop Line was later built closer to the shore of Lake Erie.

In the article above, 'narrow gauge' refers to Standard Gauge. The first gauge of new Canadian railways of the time was encouraged by legislation and subsidies to be the Provincial Gauge of 5 feet 6 inches.

If you look closely at the poster below, you'll see a lot of familiar railway lines ...

As always on this blog - notice that Hamilton (solar) 'railway' time is being used along all the lines. Standard time zones will eventually be made necessary by the 'solar time' busting speed of trains. At the bottom centre is a brain busting chart of local solar times to 'help' travellers.

On the subject of rails: By today's standards the Great Western, using all this new railway technology, had particularly bad luck with rails. It laid both inverted 'U' rails and rails connected by 'fish' (plates). During the world railway boom, demand for British rails was so high that good to poor quality metal was rushed out of the various rail plants  - and accepted by expanding railways - so the money-making infrastructure could be put into service quickly.

By popular demand, the GWR main line was also opened before the roadbed was properly graded and ballasted. Pounding trains, bad metal, frost heaving ... there were rail breaks all the time and the rolling stock took a lot of punishment as well. Rail seldom lasted a decade on the main line. The GWR set up a rail rolling plant in Hamilton in an effort to manage its rail problems 'at cost'.

As during the recent internet boom, railways often found it efficient to grow by acquisition. The skillful use of cash, debt, government subsidies and (blackmail) bonus incentives from towns wishing to be on your new route ... could determine whether you were an acquirer or an acquiree.

The GTR eventually became over-extended and was taken over by the classic 'Railroader of Last Resort' - the federal government in 1923. ..Sorry if I spoiled the ending there. 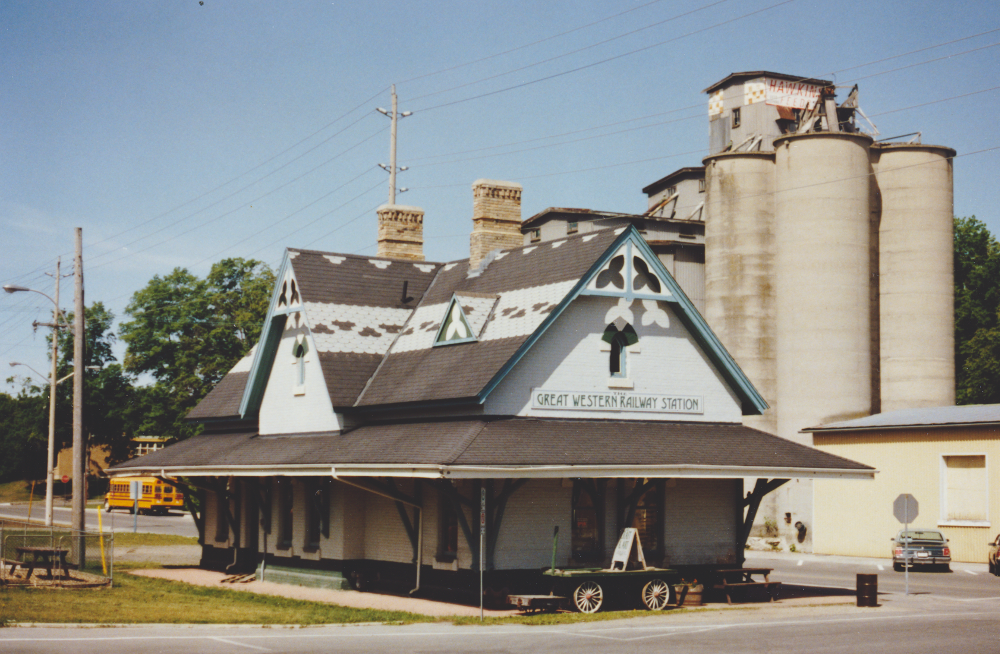 Here is the original Tillsonburg GWR station on its original site.
My note indicates an artist co-op occupied the station then and the roof pattern was reproduced from photos.
A GoogleCheck of the station today at Bridge and Bidwell Streets shows the elevator is gone.

The Historical Magic of Komoka 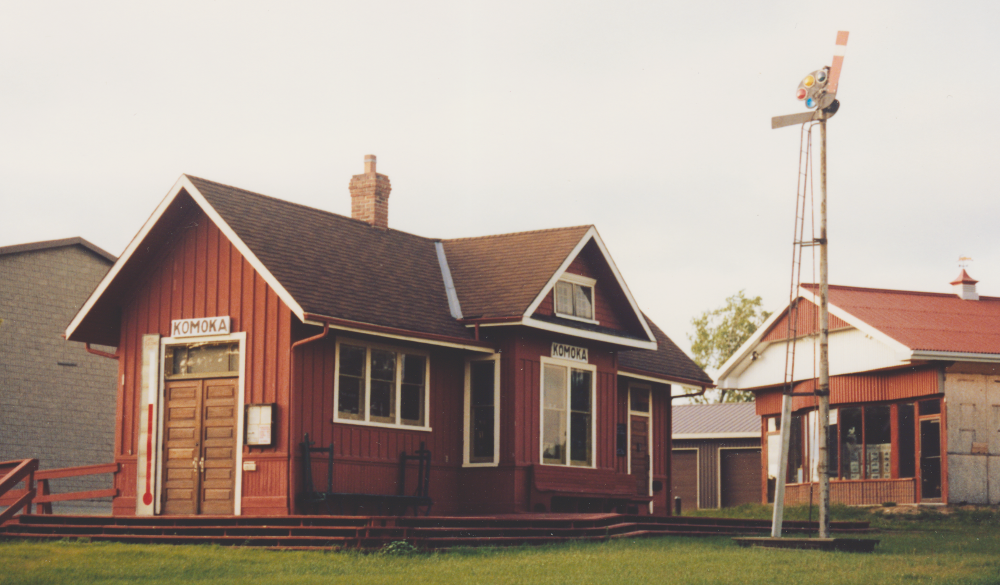 Komoka is one of those magical railway places of destiny - like Red Pass Junction - where railway lines part to reach different destinations ... in this case Windsor or Sarnia.

An evening drive found us at the Komoka Railway Museum. I remember reading an opinion piece around this time that this particular museum had achieved remarkable community involvement and support and that it stood as a model for how railway museums might be integrated with their communities. 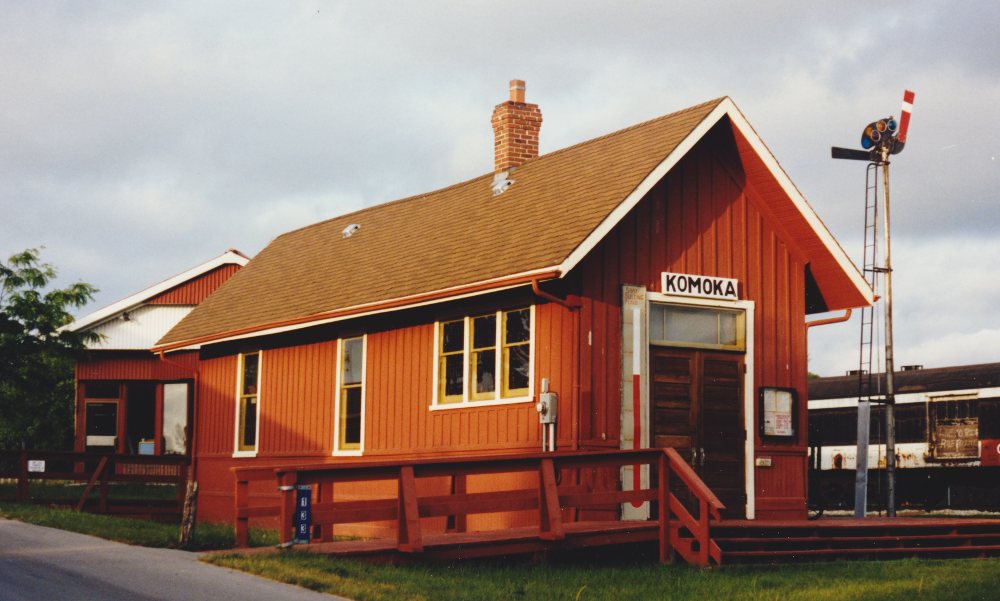 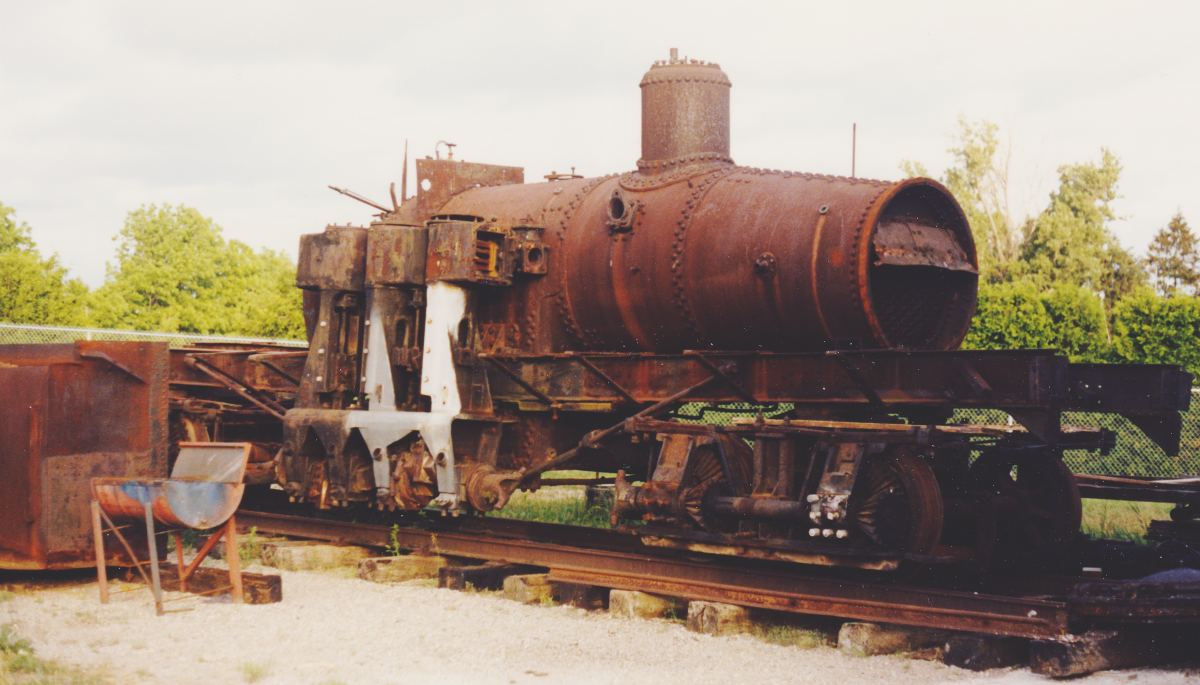 Exactly as you have likely identified it - this is the Museum's Shay in an early stage of restoration.

During our evening drive in the area, we drove down this road, but I had no lens wide enough to document the Komoka spilt and no time to find and photograph the switch. With GoogleMaps and ConnectoryPokery you can see the line splitting for Sarnia at the left and the line for Windsor off the far, far right edge of the page. The switch itself is near the piping of the grain elevator leg on the right horizon.

Beyond the horizon ... Hyde Park and exotic London towne! 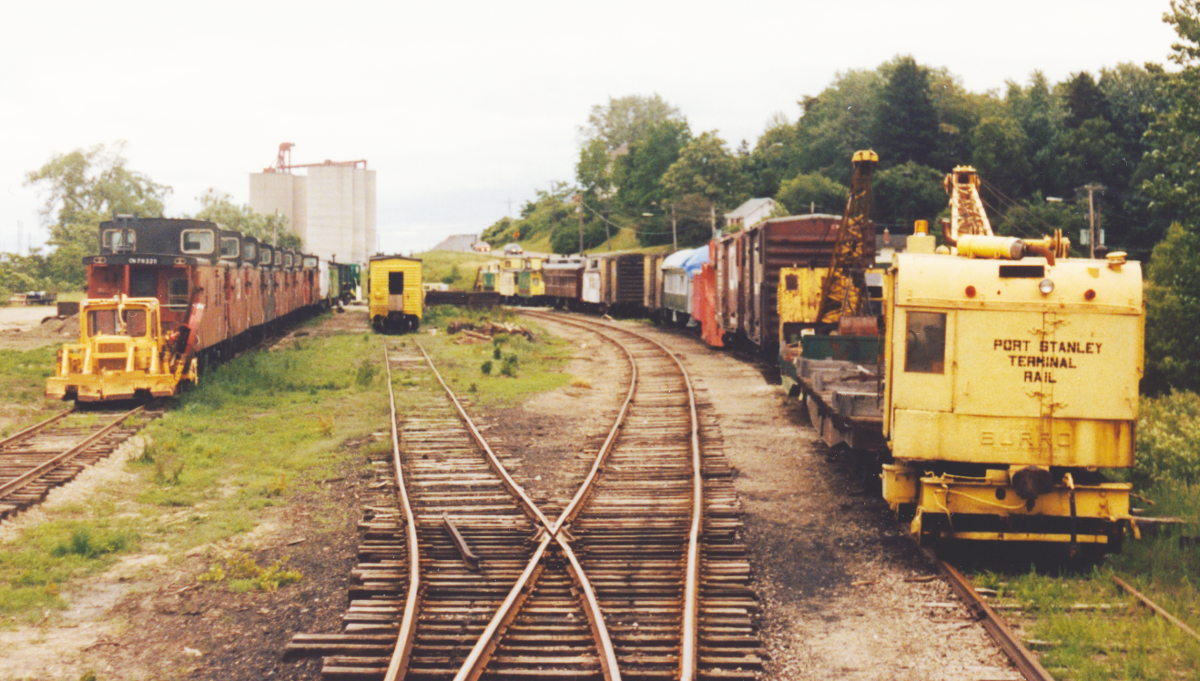 For our visit, the main attraction in this area was the Port Stanley Terminal Rail.
Here, our train is reversing through the yard and into the station at Port Stanley. 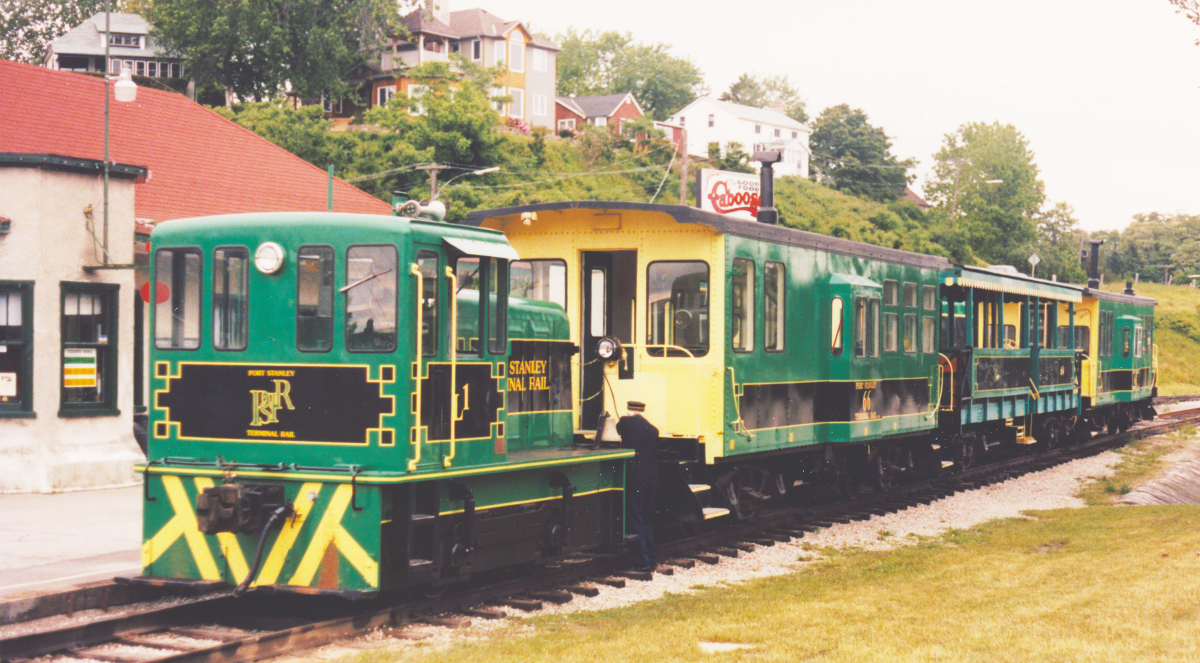 This simple, efficient train provided the quintessential steel-on-steel experience for visitors.
The (protected) occupied robin's nest in the eves of the open car was going to be booked off for miles before the end of the month.

The London and Port Stanley

These maps give you the routes of the key railways.
An enlargement below covers the original territory discussed above.


Historical illustrations follow - to put you into the historical context.


... so ends a quick vacation trip in the London area.