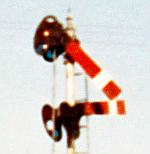 In 1985, in the distant dark ages before the internet, we were visiting the railway attractions of south-western Ontario. These attractions were discovered from paper publications such as Trains magazine and Canadian publications such as Canadian Rail, Branchline and the UCRS Newsletter. Our male family members maintained a small paper internet and library with 'postings' once or twice per week.

... and when the first personal computers were available in the late 1980s, we'd do things like index my father's 20-year collection of Canadian Rail 'for fun'.

In any case, during our first visit to St Thomas my spouse and I came upon a surprise ... 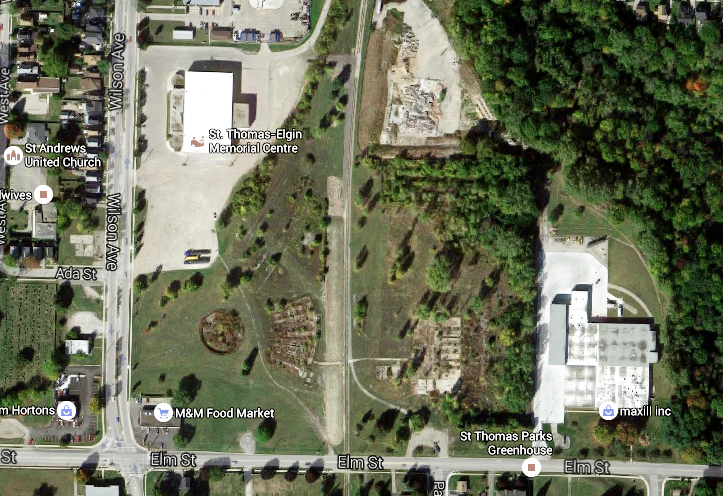 On a GoogleMap image from circa 2016, you can still see the imprint of
the former Chesapeake and Ohio roundhouse, turntable and shops at St Thomas, Ontario.
North is at the top of the image, as it is for the map below.

With the street names on the aerial image, above, matching up with the map below it, see if you can spot the location of the former roundhouse. The answer is just below.

We purchased this map around the time of our visit. Railways in St Thomas and the local layout of roads were challenging to master when we visited for just a few days on vacation. Our navigation achievements could not always be reproduced on demand - even for something simple like getting back to our motel.  We made three trips there over the years.

Answer: Look for the track wye in the south-west corner of the map. Wilson and Elm Streets meet near the blue triangle. Notice the London and Port Stanley line is labelled, running almost straight north and south.

The sanding facility is left at the very edge of the photo as a landmark for you.
Perhaps the first item to attract our attention was the brightly-coloured Chessie System power 'deadline'. 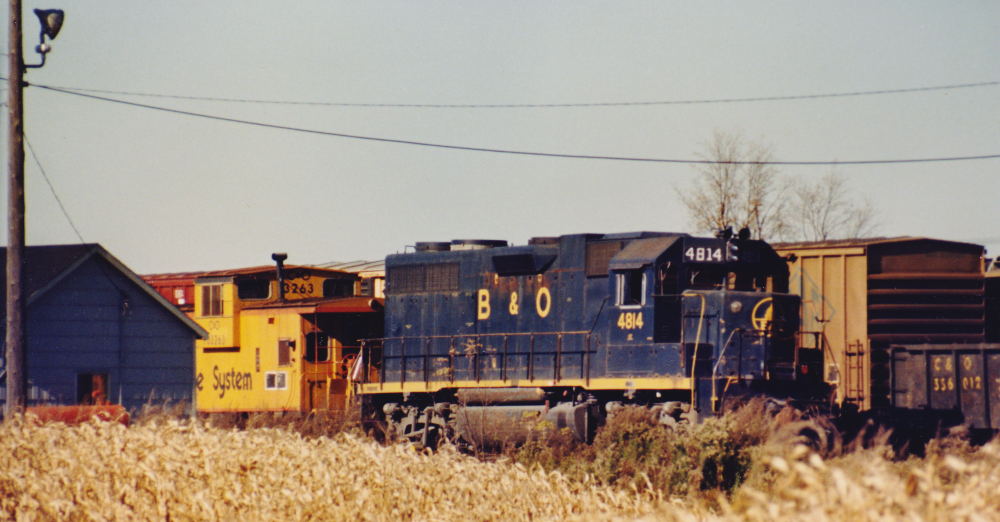 The Baltimore and Ohio Railroad was eventually controlled by the C&O in 1963. 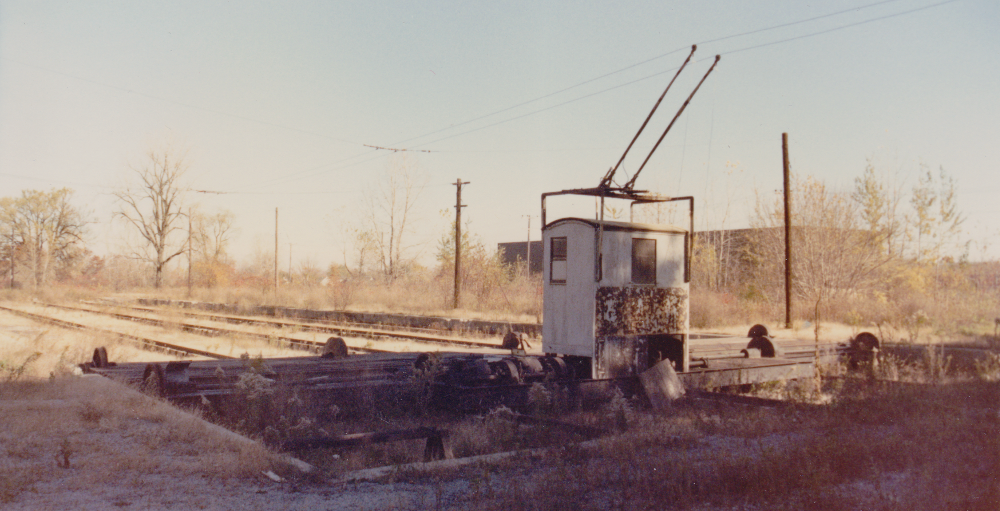 A transfer table formerly used at the shop facility.

The roundhouse building.
You can see the sanding facility and the locomotive deadline at the right.
I think the top 'absolute' arm of the diamond semaphore governed London and Port Stanley traffic.

Some detail of the roundhouse turntable can be seen here. The black cabin was occupied by the hostler or labourer operating the turntable. Electric power is fed to the centre tower on the turntable bridge. The electrical contact point remains static while everything turns beneath it.

How many treasures can you stumble on in one spot?
A steam auxiliary crane beside the roundhouse.

With the steam crane's green idler car closest to the camera at the extreme left, here is a final overview. There were so many other things we were scheduled to see in St Thomas, and there was no question of trespassing more than we had to take these pictures - so everything was photographed in a matter of minutes. During our next visit a few years later, only building wreckage was to be seen here.

According to Engine Houses and Turntables on Canadian Railways 1850-1950; Edward Forbes Bush; 1990; Boston Mills Press ... Pere Marquette (C&O) built this eight-stall roundhouse in 1941. The turntable was 115 feet long, the stalls were 120 feet in length. This modern, long turntable reflected the size and power of the locomotives used near the end of steam.

... In that earlier era of protective tariffs on railway locomotives, to ensure that this high tech industry remained in Canada - locomotives tended to operate, and to be serviced, on one side of the border or the other.

Pere Jacques Marquette was sent to New France as a missionary at the age of 29 by the Jesuits. After other explorations, he and Louis Joliet explored down the Mississippi. Being concerned that they might tangle with the Spanish if they continued farther, they turned back. Weakened by dysentery, Pere Marquette died at age 37. 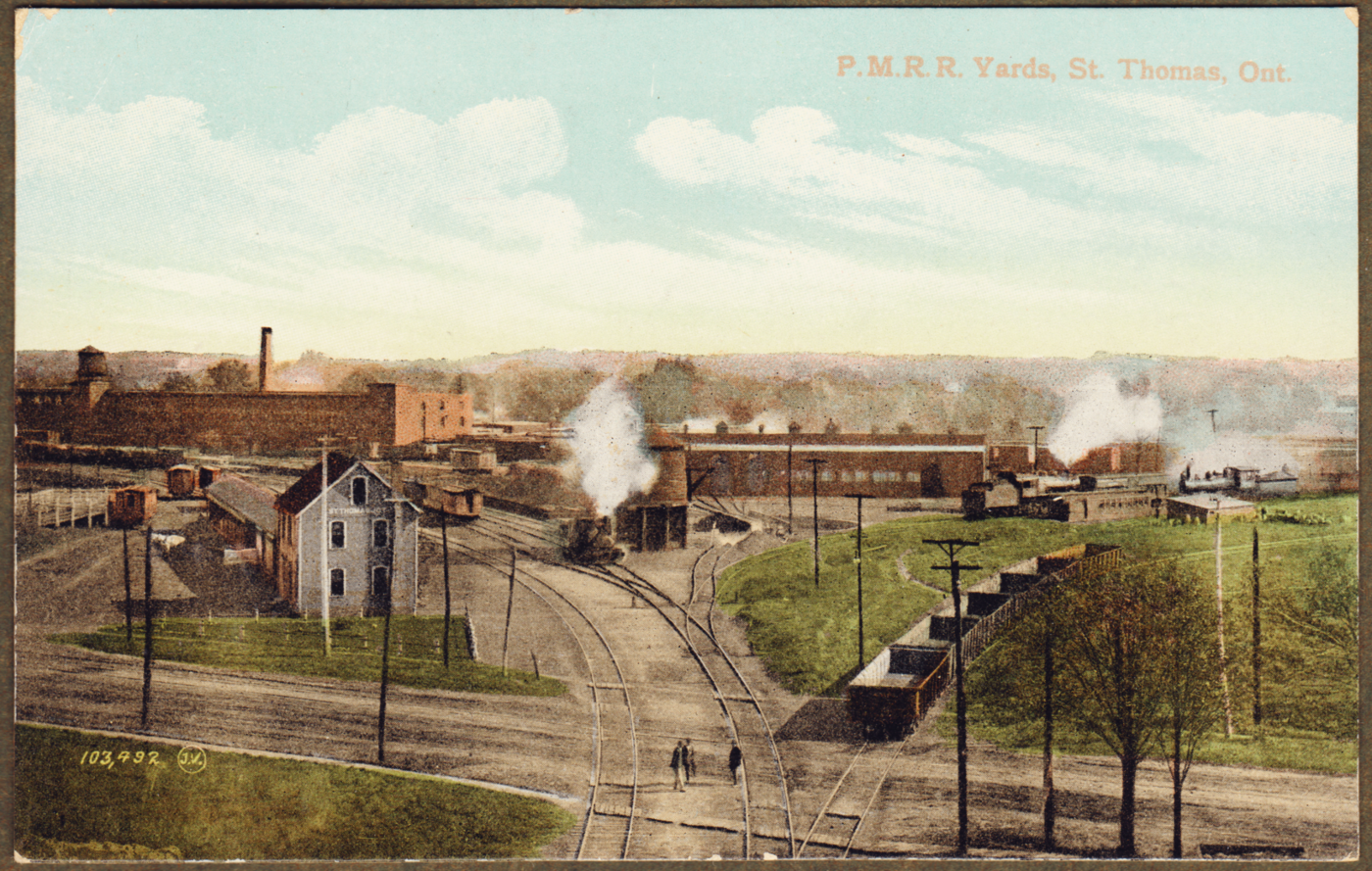 This postcard was mailed to Guelph in 1909. You can see many little details here. Perhaps local railway officials at the crossing are watching the photographer risk his life on a perch such as a coaling tower. This view may be from the west switch of the wye pictured in the 1985 St Thomas map, above ... with the pre-electrification London and Port Stanley running somewhere in the background near the shop buildings.

With the railway territories mapped out in my favourite atlas, here is the complicated arrangement in south-west Ontario in 1915. Being good economic geographers, the American railroads built or acquired railways in Canada along the north shore of Lake Erie because the route was shorter (e.g. from Buffalo/Niagara Falls to Detroit) than travelling around the southern edge of the lake. Back in the time when speed provided a competitive advantage for passenger, express traffic and freight, this arrangement made sense. Some of this was very fast track.

As the 'free' highway system developed, passenger traffic, and time-sensitive freight travelled more and more by road. Fewer railway lines were needed for the remaining bridge traffic through the area, and to service local industries. Government regulation had preserved service on some of the lines and facilities we saw in St Thomas, but many had become mementos of the railways' past achievements.

Here is the same map with better detail from St Thomas to the west.
I had to do the images as video captures because that book gutter at 'Windsor' was impossible to reproduce on the scanner.

Along with this map, the Atlas of Canada stated that the Pere Marquette had the following in Canada:

In 2016, I believe you can see this location restored in a durable way, using the original ferry ramp beams and counterweights near the intersection of Goyeau Street and Riverside Drive East at Windsor.

Above is the railway's own system map in the Official Guide of 1915. With the lack of detail shown east of St Thomas, and also in the timetable following, you would be correct in assuming that the Pere Marquette had only running rights east of St Thomas. The exaggerated directness of railway routes on this type of map really illustrates the attractiveness of the Canadian route north of Lake Erie. Competitors' lines are shown only if it is advantageous for the railway commissioning the map.

In our photo album is preserved this excellent image forwarded by my brother near the time of our visit. Two tracks and the catenary of the London and Port Stanley run behind the new Pere Marquette/C&O roundhouse. Four rails of the transfer table shown above can be seen beyond the large, flat shop building. An old wooden passenger car with a clerestory is visible on the far side of the transfer table tracks.

In this reference handbook, along with the C&O system map above, was an overview of the railroad, including the following passage:

"Chairman of the Board is Robert R Young, born 54 years ago at Canadian, Texas. Mr Young achieved popular fame by advertising that a hog could cross the country without changing cars while a passenger could not."

If you have gained nothing else from this post, at least you have a reference for that famous quote and observation regarding the corporate and physical development of the American railroad system.


With other forms of transportation becoming dominant in the 1950s,
the railways of south-west Ontario were shown in much less detail in the 1957 Atlas of Canada.