VIA 1990 Kingston Protest About Service Cuts 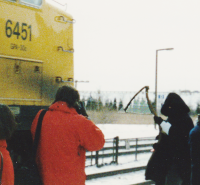 There comes a time when citizens must arise, gathering up whatever farm tools they can find, to send a message to those who are furnished with free rail passes!


I've only been been involved in two public demonstrations in my life. At the last minute I grabbed a stored 110 film camera from my car - not having expected such a well-organized effort. It would have been nice to have captured better photos of the event.

We demonstrators were a diverse group. We were probably attracted by newspaper notices of the coming protest at noon on January 15, 1990 - the effective date of the VIA Rail cuts we were protesting. ... Or the demonstration may have been held on the preceding Saturday. A few local politicians and the press were there. I suspect Transport 2000 (now Transport Action Canada) was involved in aspects of this event's organization.

A story in The Age (Melbourne, Australia) from July 25, 1989 covers some of the essential facts.
In particular, note the comments by John Howarth in the centre of the article about VIA's future.

Of course, when one protests on the day on which the cuts are effective, one is closing the barn door after the iron horse has gone. But only some of the protesters were late on the scene. Some people had been actively involved in using VIA services and trying to ensure that positive action was taken to see them developed.

By way of a brief history of the era, it seemed likely VIA would be shut down. A lot face-saving mischief can be done in the way of neglect and demand destruction. The governments - which got the railways off the hook by taking over passenger rail service - would then be let off the hook themselves through their own neglect.

None of us needed the kind of abuse VIA was inadvertently dealing out to even true believers in the system in the 1980s.


In their defence ... VIA and the governments were dealing with entrenched organizational behaviour.

Without exceptional leadership, new equipment, a belief that their work would be appreciated and that their jobs would be reasonably safe, VIA employees could have been forgiven for being unmotivated and demoralized in the 1980s.

The attention gained by, and the personal satisfaction from being involved in, that 1990 protest were a nice contrast to the long, drawn-out process of contacting one's Member of Parliament during the era: 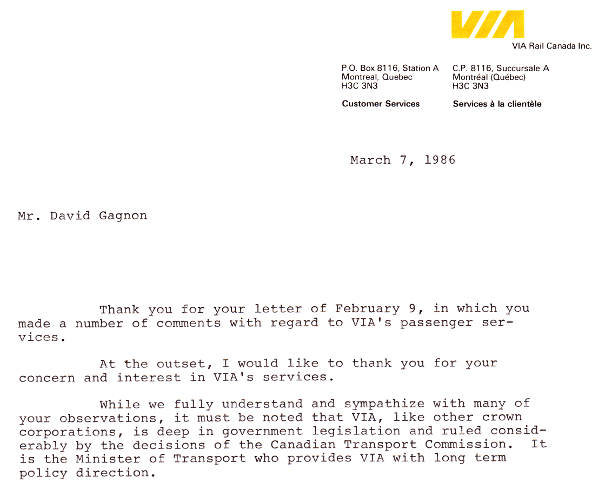 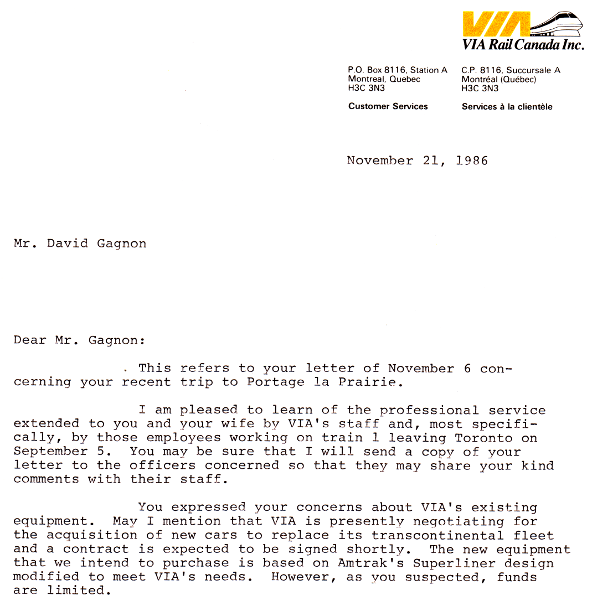 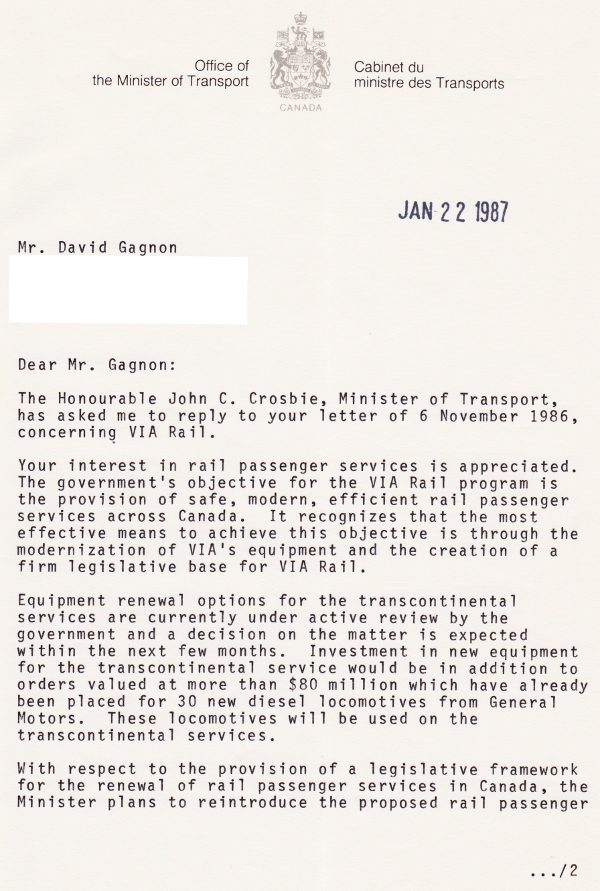 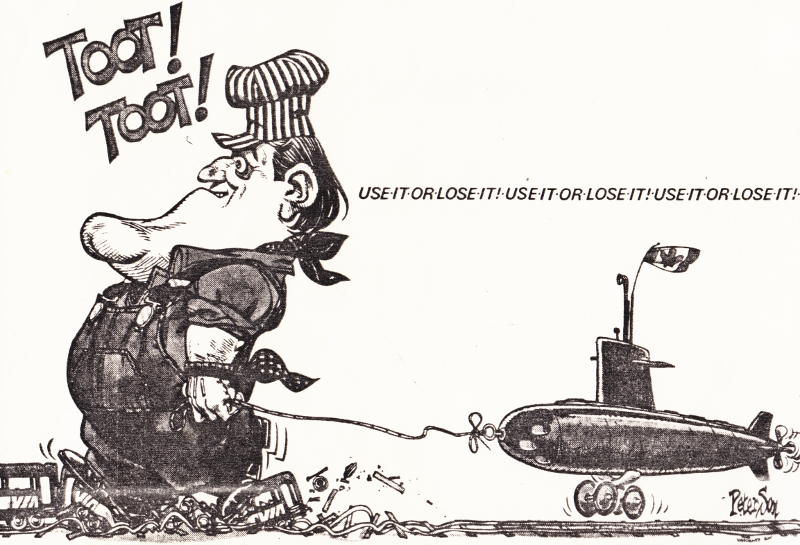 This editorial cartoon appeared in our local newspaper in April 1989. This co-incided with the release of the federal budget announcing funding reductions to VIA. Notice the annoying political construct that a good service was being neglected - that citizens themselves were at fault for the cuts.

At the time, Defence Minister Perrin Beatty was looking into buying nuclear submarines. Later, the US quietly spoke to France (a potential vendor) discouraging them from selling subs to Canada because it wasn't in the Americans' interests to have to tell Canada what, if anything, they were already doing under the ice in Canadian territorial waters. 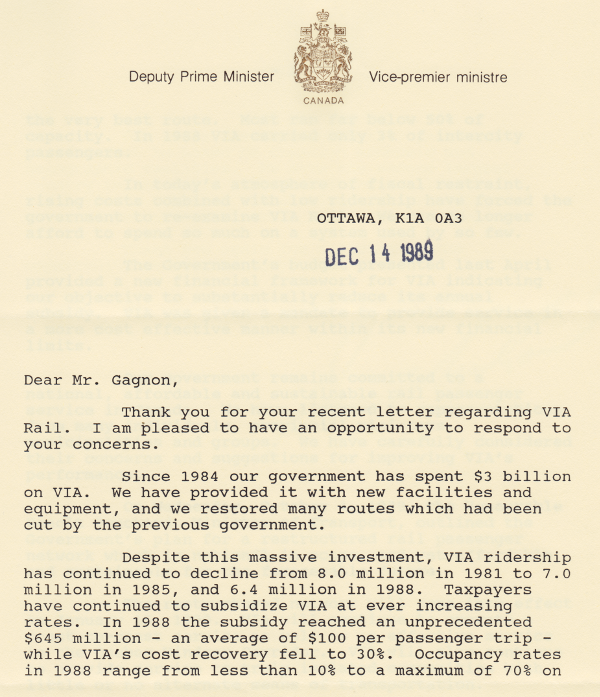 It is a matter of personal pride that this response was signed by Don Mazankowski's Autopen.

The following document images come from a 'study' which served to 'prove' that VIA's market share was generally insignificant. In fact, the only mode with a consistently significant share of the market is the private automobile.

In the covering letter, I recall that my MP repeated their other favourite line: the Federal Government is not in the business of providing 'commuter services' - i.e. long distance services were losing money; anything shorter was a 'commuter service'. 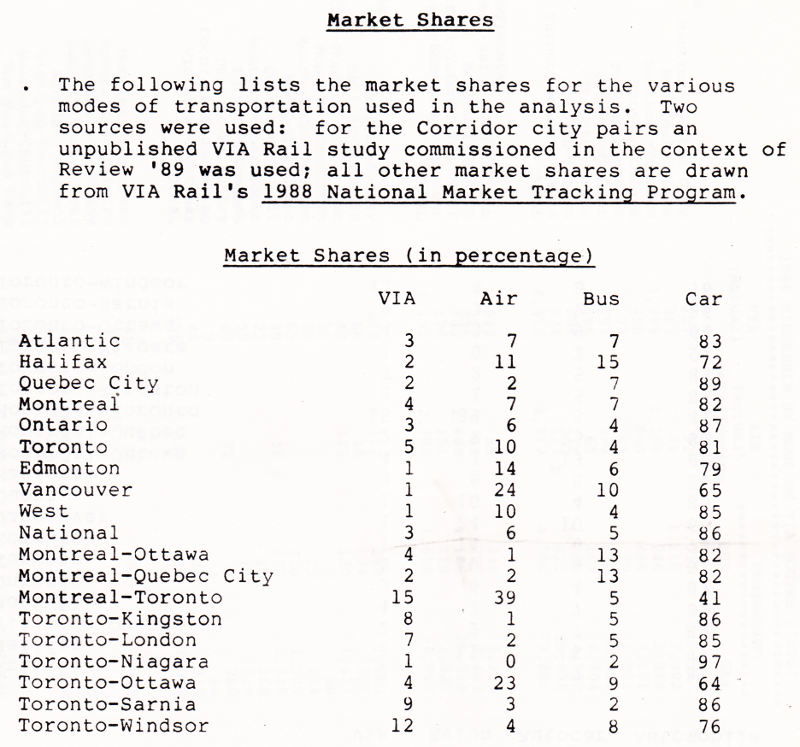 Most of the equipment then used in VIA service was produced during Canada's railway steam age - before 1960. To be able to heat older passenger cars which had originally been pulled by steam locomotives, oil-fired steam generators were supplied within new 1950s-era passenger diesel locomotives. Canadian trains required heating during the fall, winter and spring seasons. Years of use and neglect ensured that these heating systems were no longer efficient by the late 1980s. Many of us remember seeing spectacular steam leaks on passenger trains during this era.

... Furthermore, the 1940s/1950s-era diesel motors in these same locomotives were used exclusively for locomotion - by design, all their waste heat was dissipated.

... However, through a simple heat exchanger, some of the waste heat of a bus motor is easily directed into the adjoining passenger space giving the heating system of a bus an environmental advantage.

Rachel Carson's Silent Spring (1962) and the establishment of the environmental movement post-dated the design and manufacture of most of Canada's passenger railway equipment.

The graph above shows the age of VIA's power in 1988. Can you spot a period when no investment was made in new locomotives?

Still arguing about the environment ... while the BBD and GMD units purchased in 1980 and later produced electric 'hotel power' for electric heating (rather than steam) ... the diesel motors were based on designs first introduced in 1949 and 1965, respectively.

On long distance runs, the GMD units did not even produce hotel power for the trains as those 1950s-era cars still required steam heating.

Regarding the new passenger cars which came with the BBD power - a lot of effort, money, employee morale and customer goodwill were consumed by the design problems of the BBD LRC technology.

For cars designed and manufactured in Canada, it was stunning that something as predictable as ice and snow accumulating in moving parts fell through the design cracks. ... For a train to depart, all doors on an LRC coach set had to register as closed at the locomotive. Often, the powered stairs and doors on the cars could not satisfy the electric sensors, due to accumulations of ice and snow - resulting in 'door light' delays.

Rarely was VIA permitted to buy proven, reliable technology 'off the shelf'. 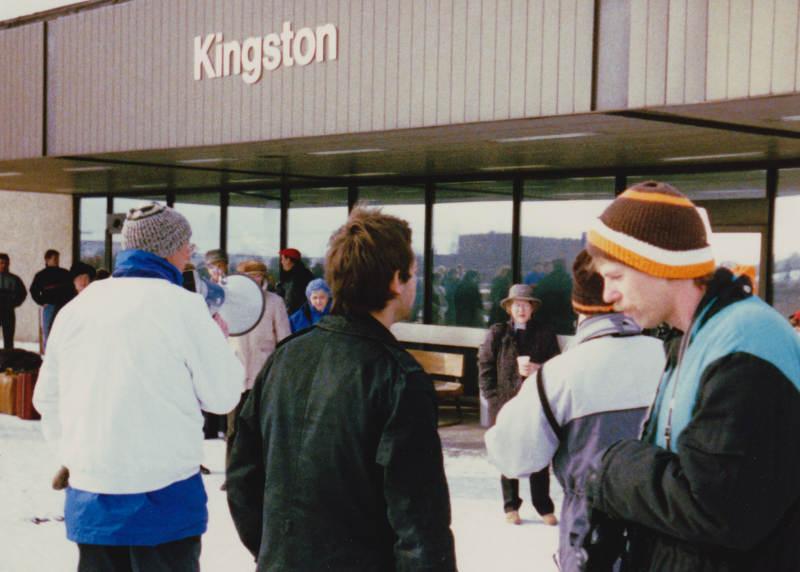 Every good demonstration needs a bullhorn to organize the crowd.
Two noon trains were met by the group.
A press photographer can be seen walking into my shot. 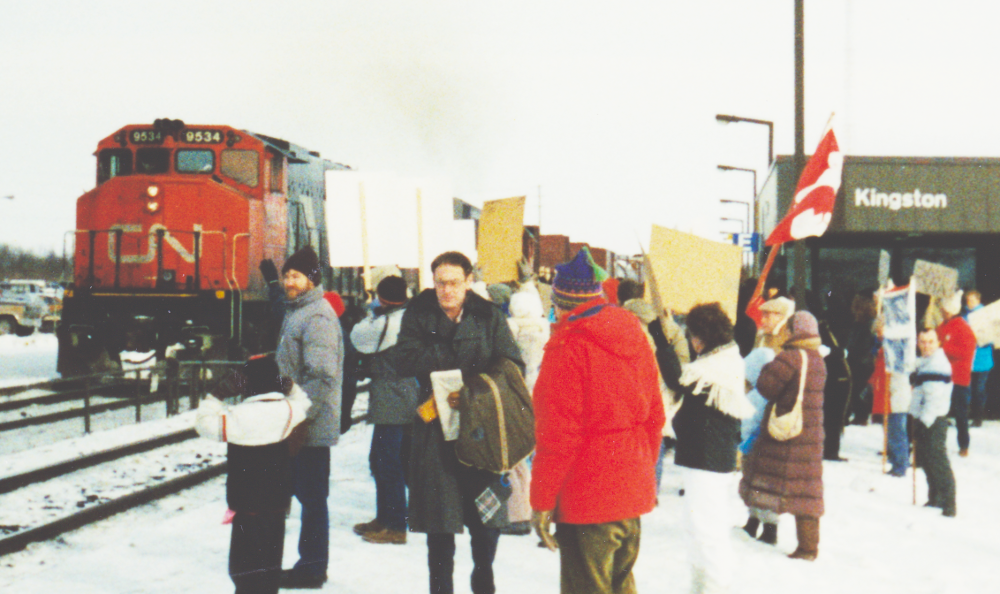 Signs were provided for those of us who came empty-handed.
Legitimate passengers mixed with the would-be guardians of their transportation. 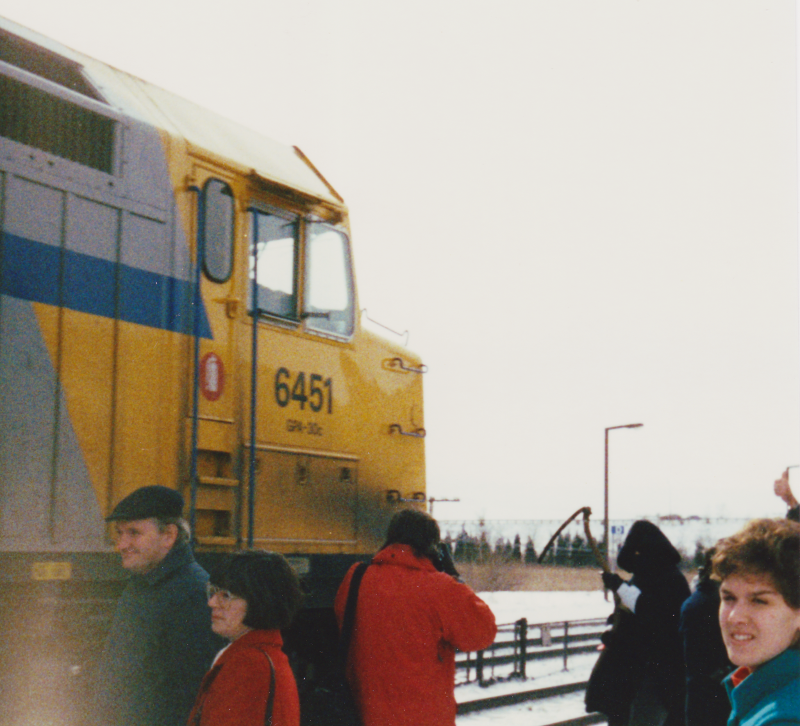 In a town with a film-studies program, I should have expected this masterful motif.
This photograph was taken as the train eased in beside our mob.
The press photographers loved the Grim Reaper. 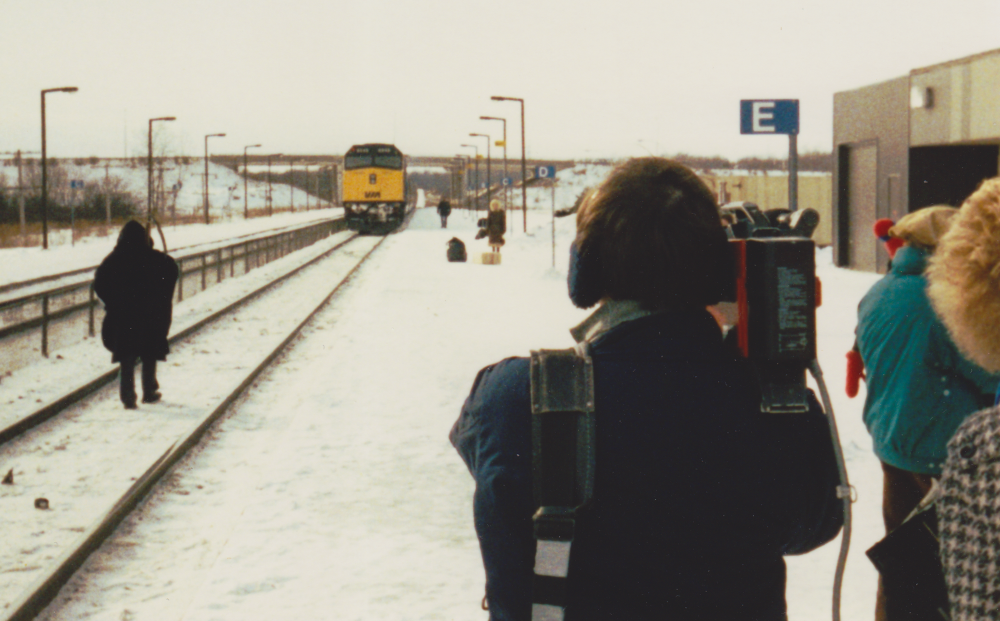 Churlishly, they broadcast images of him, far down the track, as he departed the right-of-way at a 90 degree angle. 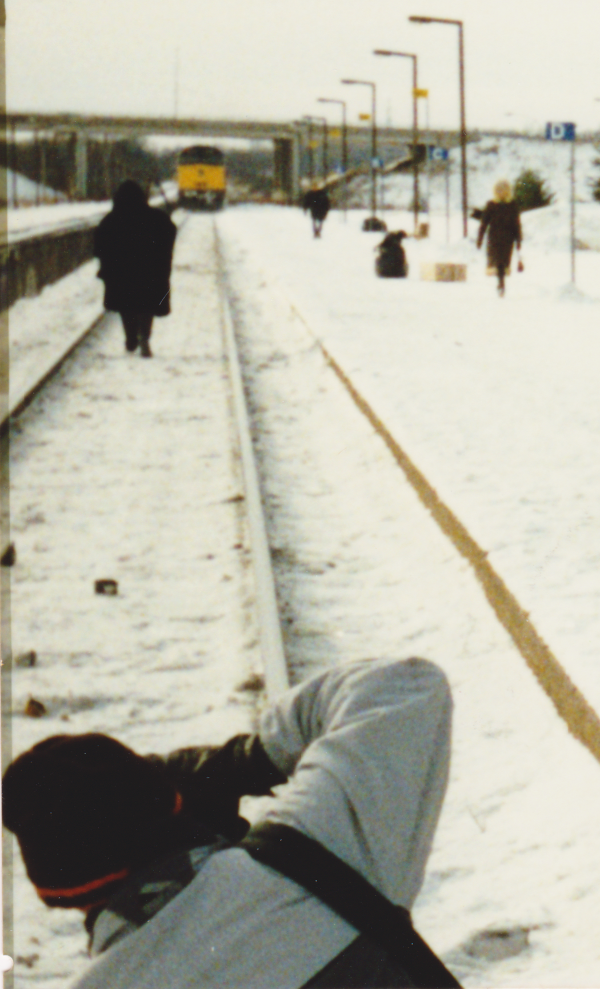 Effective images for the newspapers.

The Grim Reaper was a regular follower of VIA services during that era ...