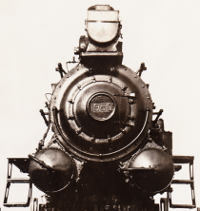 When the only problem you have is a Big Hill, every tool begins to look like a Mallet.

At a railway show, I had the opportunity to purchase several snapshot images of a CPR locomotive I had not noticed before. It probably seemed 'necessary' to preserve this little collection and 'important' to understand the technology it represented ... Why would they build this odd thing?

It is quite possible that too much attention is paid to railway locomotive technology - at the expense of understanding other interesting elements of railroading ... the study of railcars ... the necessary crafting of freight 'backhaul rates' ... the evolving importance and tools of civil engineers through railway history in optimizing the track geometry of curves. A Trains magazine piece once expressed a preference for watching the railroad's big picture unfold at a dispatcher's desk, over the deafening numbness of a cab ride.

In the realm of preservation, it is disappointing when many examples of a rare locomotive design, or a highly promoted and thus 'famous' design, are preserved in museums - while the technology which really got the job done was not preserved at all because it was so 'ordinary' that no one wanted to preserve it.

This piece illustrates the perils of in-house locomotive design. Except for the high 'weight on drivers' pay rate it furnished, here is an odd locomotive design which was not beloved by those who nudged its cutoff levers into the company notch, nor the public, nor was it preserved, nor was it mourned by the railway's official historians.

This locomotive type was designed to be used in helper service in the Rockies and Selkirks. Introduced between 1909 and 1911, the engines 1950 to 1954 arrived after traffic was taken off the original Big Hill and run through the new Spiral Tunnels.

This was a compound engine design - having high and low pressure cylinders - as the steam was downcycled as it lost energy. Each side view shows one of each. The CPR designers thought they had a bright idea in placing the high pressure (smaller) cylinder so close to the low pressure cylinder it was feeding with its exhaust.

The boiler-top box is an unconventional superheater which was unique to the 1950.


The odd attachment to the 1953's smokestack above is designed to swing over the top of the stack, to divert the exhaust blast so it doesn't damage the roofs of tunnels. As it diverted the smoke into the faces of the crew, it didn't see too much use.

In 'Canadian Pacific's Big Hill' by Floyd Yeats (BMRNA, 1985), he quotes his father, also a railroader at Field, regarding the unpopularity of these locomotives. Without pilot wheels, they were prone to derailing on sharp curves. Because the Mallet's 'two engines' each turned under the rigid boiler, but shared steam pipes - steam leaks often developed which impaired visibility.

In addition, this unusual design probably created orientation problems for engineers and firemen when they were first assigned to operate it. It would also take a while for crews, collectively, to work out the best techniques for getting the maximum output from the power. And if you look under the boiler, it looks like some plumber's nightmare - so finding and fixing problems, like steam leaks, must have been a headache for shop staff.


The following links lead to articles published about these CPR Mallets. They were sent to me some time ago by Jim Christie. Through his skill and persistence, Jim finds and saves links to these century-old journal articles preserved at archive.org . These articles allow us to read about these old technologies in the present tense and they help us to understand why they were designed and how they were used.

Format below: I am presenting the publication name and date, the link text to the article page view and an image taken from the beginning of the article. This presentation is unpolished by design to provide a backup against broken links in the future. If you use the link text below to reach the page view mode, and wish to download the whole very large publication, you can click on the title link in the top left corner and choose a format to save.
*  *  *

A third article documents the unique 1955 which was outshopped in October 1911. Unlike the other five of this class, the 1955 was 'simple' - having four pistons of the same size. You'll recall that the 1950-1954 were compound engines with high and low pressure cylinders.


As the article above states, this Mallet design gave 'excellent results' in pusher* service ... in fact so excellent that they were modified circa 1916/1917. The results of these slight tweakings can be seen in a couple of snapshots below.

* Note: Any helper used anywhere in a train is a 'pusher' in CPR steam-age parlance.

I learned this the hard way after visiting the Horseshoe Curve in Pennsylvania where they attached pushers on the tailend ...

Rolly Martin was telling me 'the story of the auxiliary which was ordered 20 minutes before the collision occurred between Selim and Schreiber' ... The steam 'pusher' had taken the [authority equivalent of a restricting] signal ... Later, the eastbound passenger train arrived on the main track and they coupled ... They then proceeded up the hill to Schreiber without authority - the passenger train assuming a clear signal. But the pusher hadn't received a clear signal. Meanwhile, the dispatcher at Schreiber had cleared a westbound freight at Schreiber and it had departed ... When he discovered that the passenger train had proceeded eastbound from Selim, the dispatcher [helpless to stop either train] immediately ordered the auxiliary ... 20 minutes before the collision!

It took a couple of reiterations of the story before we negotiated the meaning of 'pusher' between us. The passenger train had come upon its helper sitting on the main track. The helper had previously taken the signal. The passenger train coupled to the helper's tender and off they went.

Oh, and here is what the tweaked Mallets looked like: 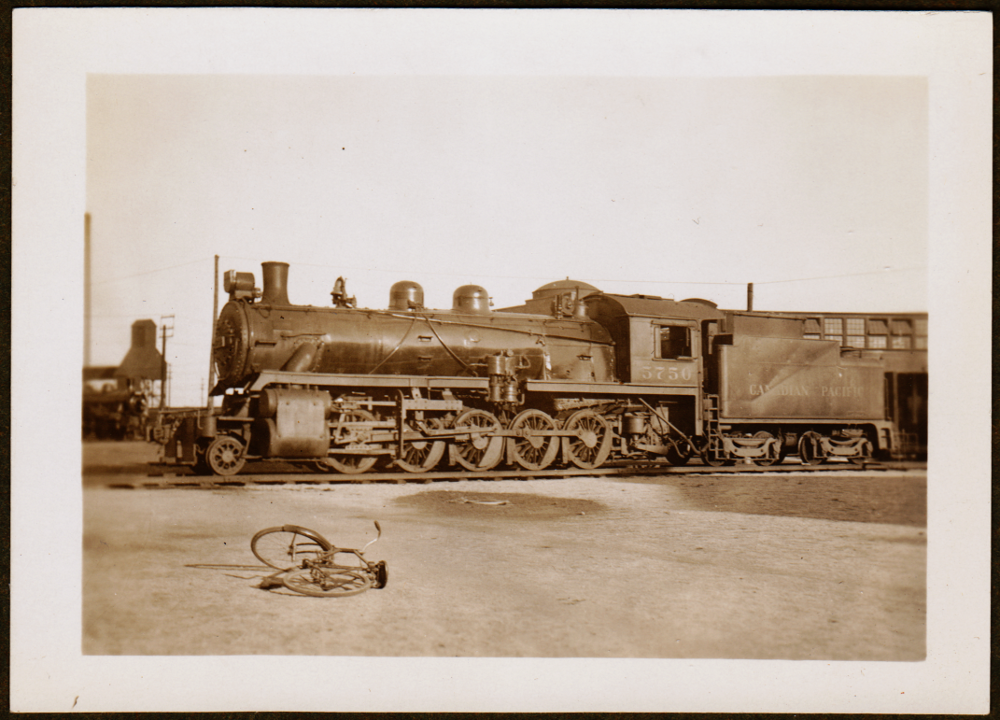 Back when this new technology showed such promise ...

Probably at the very end of the idealized Edwardian era, here is CPR 1952, attended by its crew and some large, important watch chains. It is possible that the round-roofed car on the engine's tender is a dynamometer car. Here is a dynamometer record for the CPR 1950 from Jim Christie's first article above to suggest where and when this snapshot might have been taken.