Other Categories of Railway Workers

What do the railroaders above have in common with those at Schreiber?
Almost everything.

When I went to work in Schreiber in early 1977, I saw it almost at the end of its special status as a 'railway town'.

It still had a car shop and some locomotive maintenance capacity. The divisional offices and superintendent were located there. Significant local resource-based industries were served by daily train assignments and this, in turn, required yard switching assignments.

The local offices organized crew assignments - drawing from the east and west pools, and the spareboards. Yard office staff called crews by telephone or in person. Car control functions; payroll; and even colour sense and vision tests were performed locally. Physicals required as a condition of hiring were done in Schreiber. Engineers upset about the way traffic was handled could climb the stairs after their run and have a talk with the train dispatcher responsible.

Schreiber had the 'highest per-capita income in the province of Ontario' - as we were told in the classroom. This was mainly because the running trades employees - long known as 'the aristocrats of labour' - were based in Schreiber.

My brief encounters with clerks, yard office staff, office managers and middle managers - both at Schreiber and White River - are the most fondly remembered. Some of my fellow running trades employees were intolerant of peers of other ethnic origins working with them in the running trades. Some were particularly scornful of any ideas coming from other railway companies.

'If I wanted to clean switches, I would have hired on as a sectionman!' was a quote which went with a 'not my job' refusal to work story - proudly recounted by a running trades employee which I remember being told.

As Rolly Martin started out as a sectionman (on another! road) and as an ashpitman - not starting as a member of the 'elite' running trades which I had arrived in town to become - he tended to have a little more perspective about the nature of railway work than some of the other characters I had to deal with.

Division Superintendent Small (a former locomotive engineer) told us we might get laid off, but that we should take temporary work on a maintenance of way gang if that happened - to get 'the big picture' of the railway.

Years later, I found a book which helps preserve and explain 'the big picture' of life in small towns such as Schreiber and White River - which were railway towns first and foremost, for the better part of a century.

When doing sociological studies, it is a serious business to maintain confidentiality. In this book, there are no clues suggesting which railways or communities were studied. Of course, personal interview data was also kept in strict confidence.

The author's approach as a sociologist in this book:

.. 'begins with an individual, his hopes, fears, problems, solutions and the habitual associations of his daily round of life. After informal chats or formal interviews with many individuals, the sociologist begins to see persistent patterns, some shared by all, others shared by certain respondents. During the course of the interviews it becomes clear that some respondents think that their problems are personal, unshared, and not understood by others, but other perceptive respondents are aware that many share the same difficulties because they see them as arising from a common source in their place of work, their community, or their nation. The sociologist has the advantage of listening to more people in more communities than any one respondent; this enables him to locate patterns about which many individuals are unaware. The accumulated advantages are even greater if, as in this study, the sociologist is able to undertake all of the interviewing, rather than relegating the work to others.'

'The first patterns for this book were found after interviewing many people in Railtown, Ontario.'

The local railway hierarchy begins with: 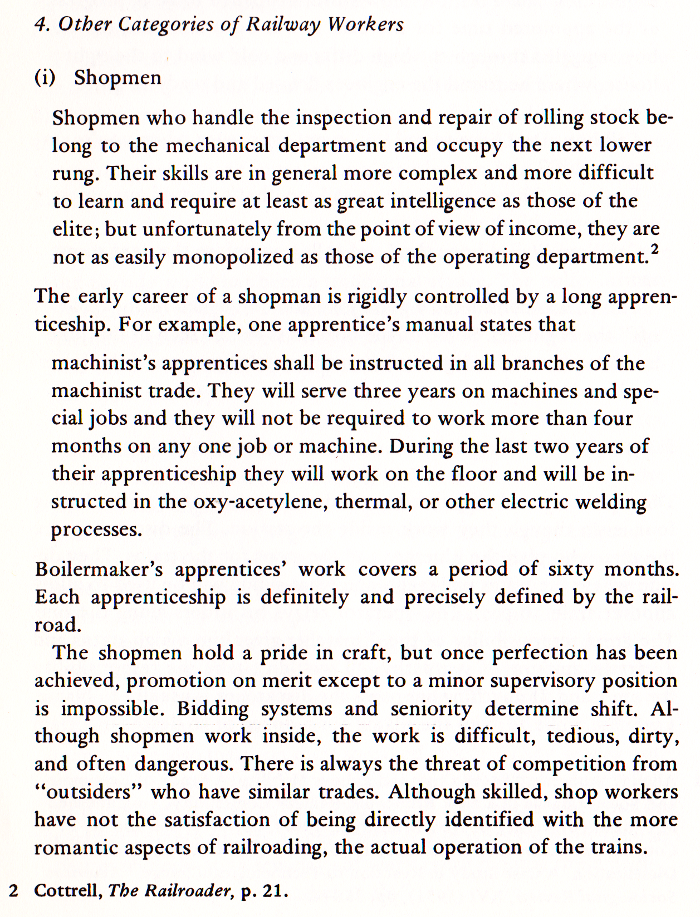 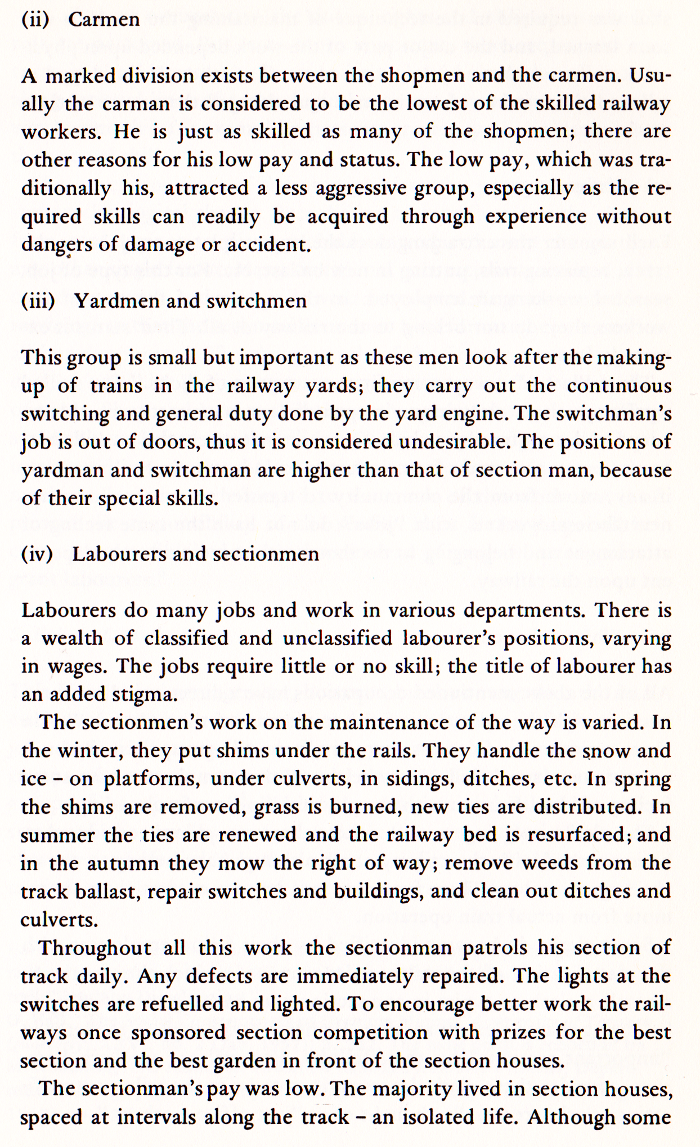 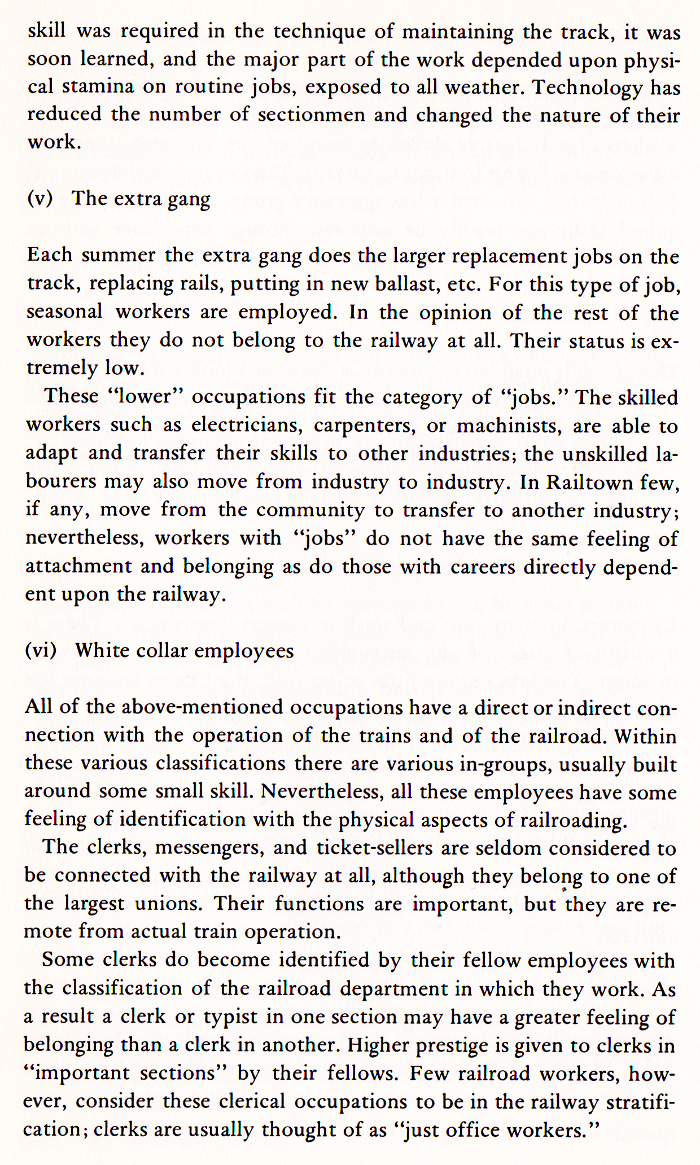 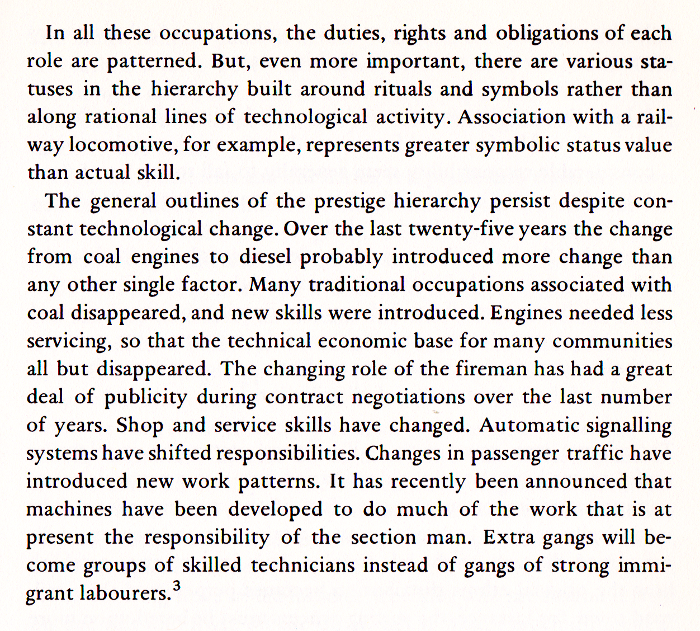 Above: 'the changing role of the fireman' ..

A story in the Quebec Chronicle Telegraph from May 10, 1968 gives a few details. It was written almost a decade after steam locomotives were removed from regular service on the CNR and CPR and almost two decades after serious 'dieselization' began. 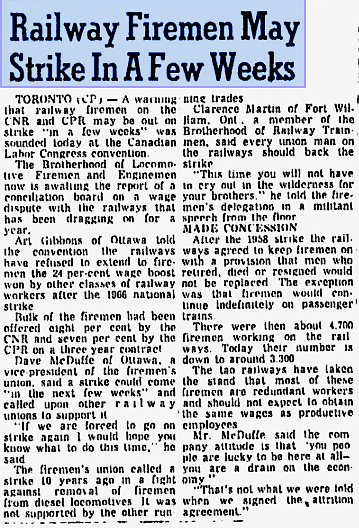