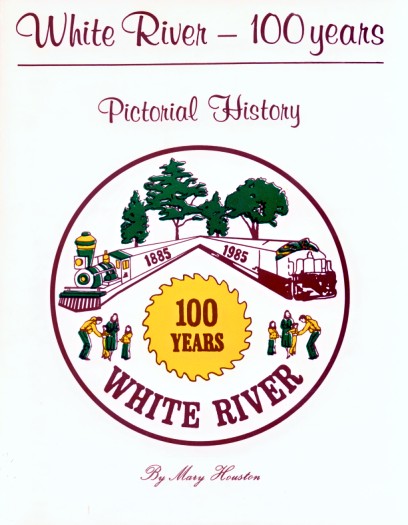 Dr. W.G. Houston was White River's physician from 1933 until his death in 1966. In 1985, the centennial of White River and the railway line, his wife Mary Houston put together a wonderful, comprehensive pictorial history of White River. Using old photographs shared by White River's citizens, it shows all aspects of community life in the little railway town from its very beginnings.


Mary Houston passed away in December 2005 at the age of 86 having lived all of her life in White River.


There are at least two points she would want me to bring to your attention.

More importantly, White River was long advertised as "the coldest spot in Canada " at -72 degrees Fahrenheit. This is not correct because that reading came from a shattered thermometer. The lowest temperature recorded was -61.2 degrees F on January 23, 1935 and this is proven in her book through the use of official weather records.


I own a small collection of town histories from the north shore of Lake Superior. Mary Houston's is my favourite because of the community spirit and resources she brought together to leave this important record. Looking through her book, I feel as if I've actually lived with the citizens of White River through its development. (Living in southern Ontario, I have missed White River since our last visit in 2002)

The book is almost 180 pages long and contains over 400 photos. It is valuable both as a social history and in providing rare insights into the CPR's facilities and operations.

From time to time I have received emails from Mary Houston's relatives. I am including a few photographs from her book, captioned and credited verbatim.

I hope Mary Houston's work and example will be remembered.The remaining railway heritage of the towns north of Superior is fading fast. Perhaps a new generation of local historians will become inspired to research and preserve the memory of those who lived north of Superior. 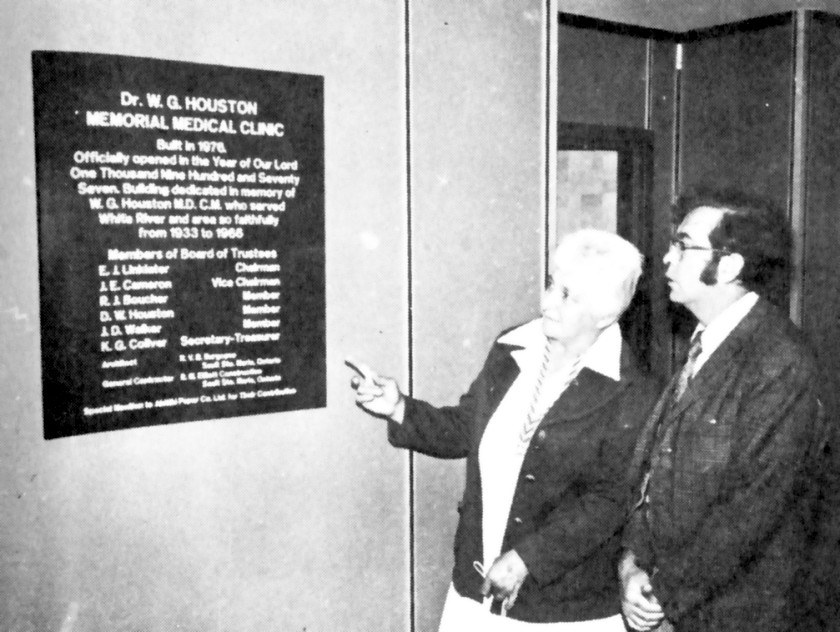 Mary Houston and son Dan looking at plaque in medical clinic dedicating the building in memory of Dr. Houston who served White River and area from 1933 to 1966. 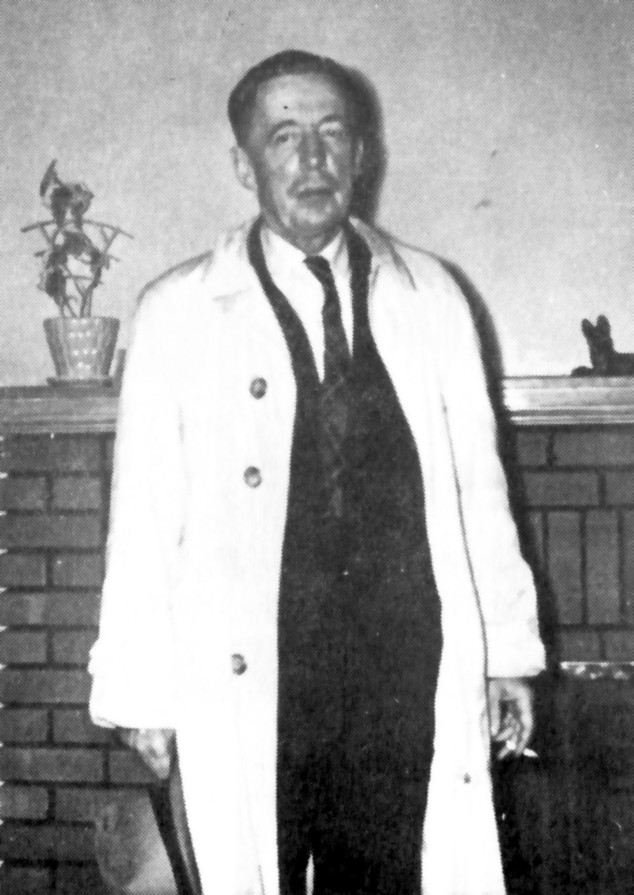 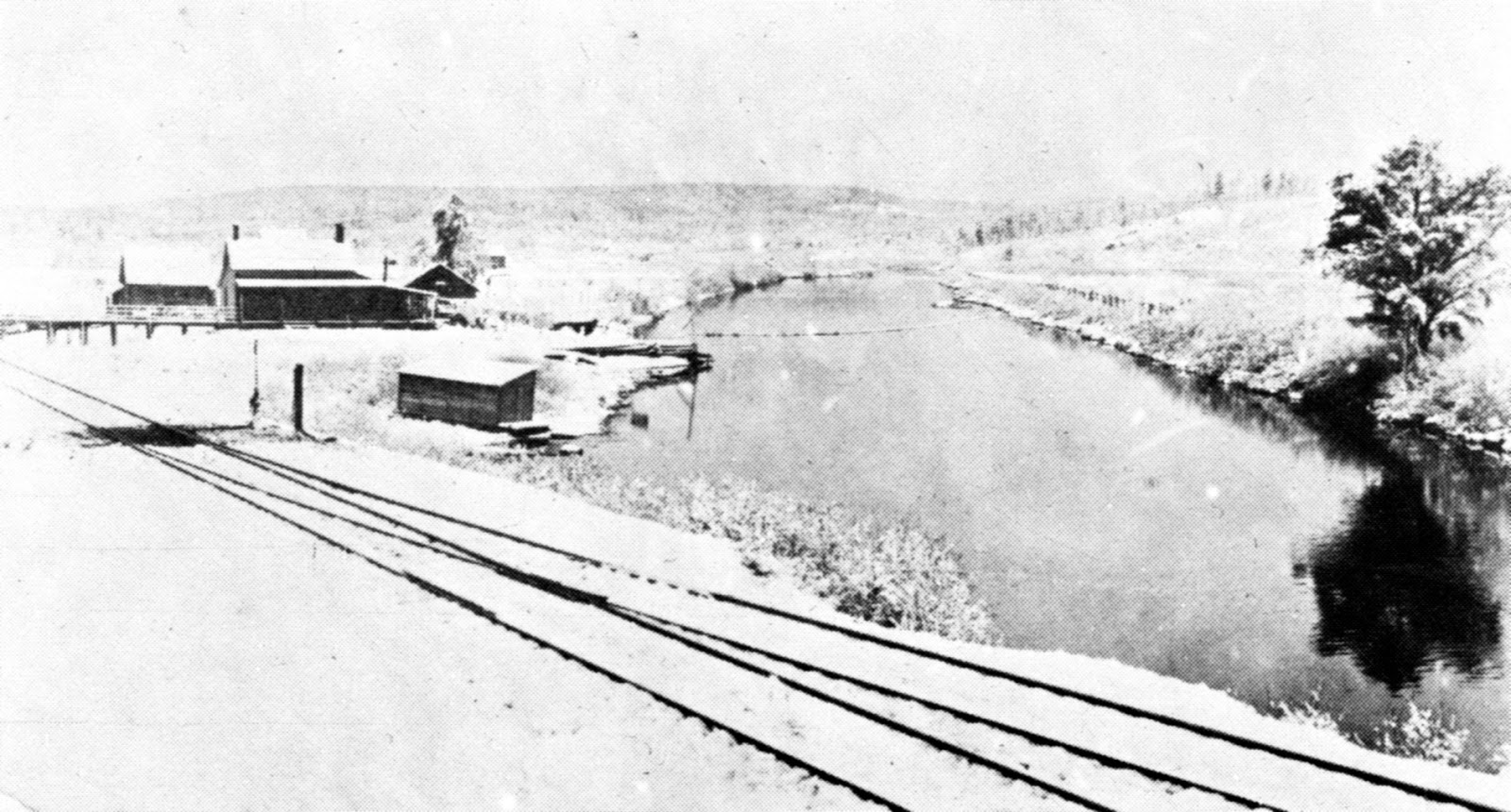 The first McDougall home down by the river.
Photo: Courtesy L. Mealey 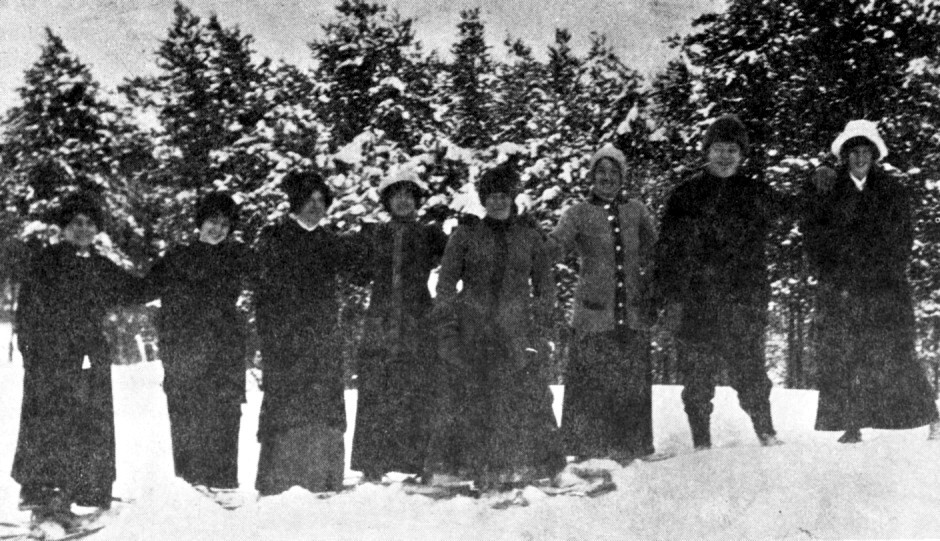 The ladies enjoyed their snowshoe tramps - one "beau" amongst them.
"Maw" Depew about centre of picture.
Photo: Courtesy L. Mealey 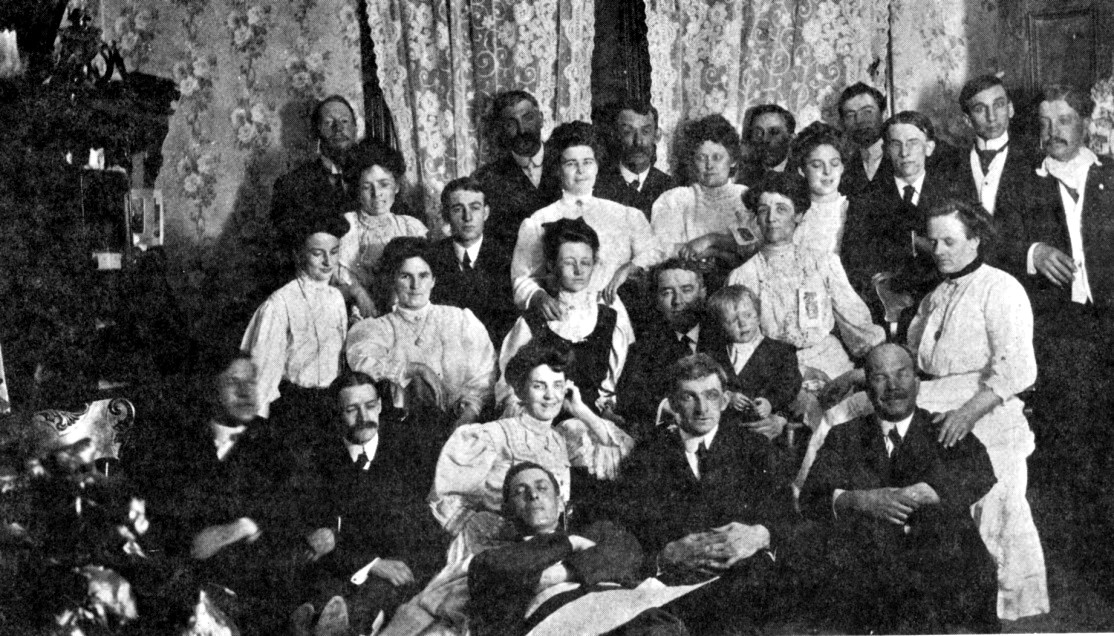 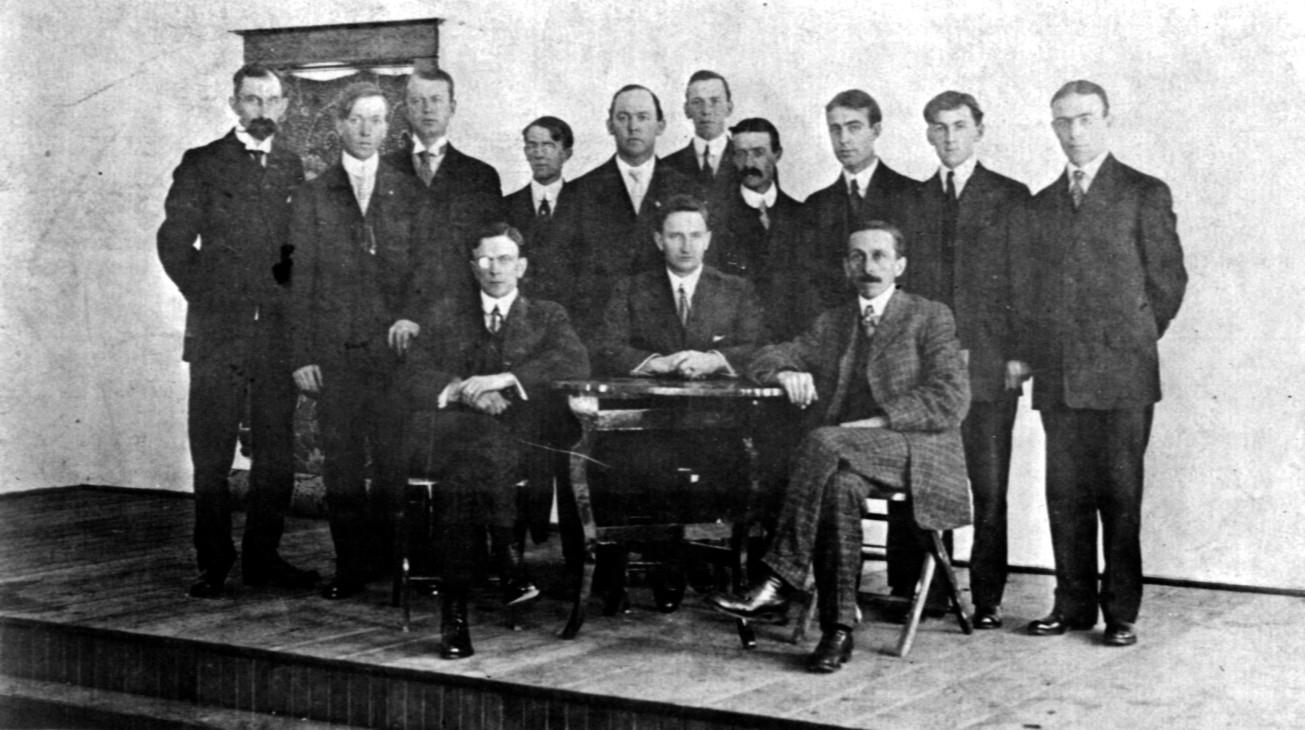 A group of men known as the "13 Club" held their meetings on the top floor of the new school built in 1910. Many card parties, dances and socials were held here before the room was required for use as a classroom. 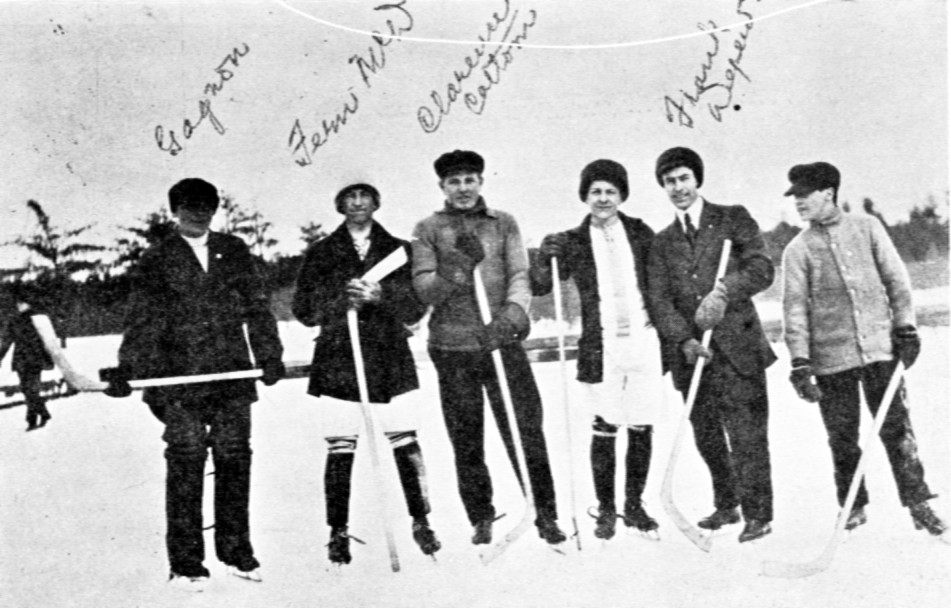 In the olden days you didn't have to ask the hockey association
whether or not that the girls could play hockey with the boys.
Photo: Courtesy M. Unwin

The original Allis-Chalmers dynamo in the CPR shops which was used to supply the first electric power in White River, believed to be around the year 1904. Several years later Tom Whent on duty as stationary engineer.
Photo: Courtesy T. Whent

In the 1920s mail was taken into Pukaskwa Depot on Lake Superior by dog team via the White River trail which originated in White River, and ran for about 70 or 80 miles to the depot.
Abitibi had a logging operation there, and this was the only means of communication with the outside world for people on the logging operation from freezeup to breakup in the spring.
Photo: Courtesy Ann Cottom 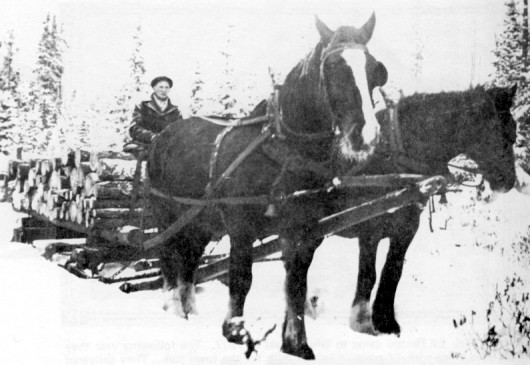 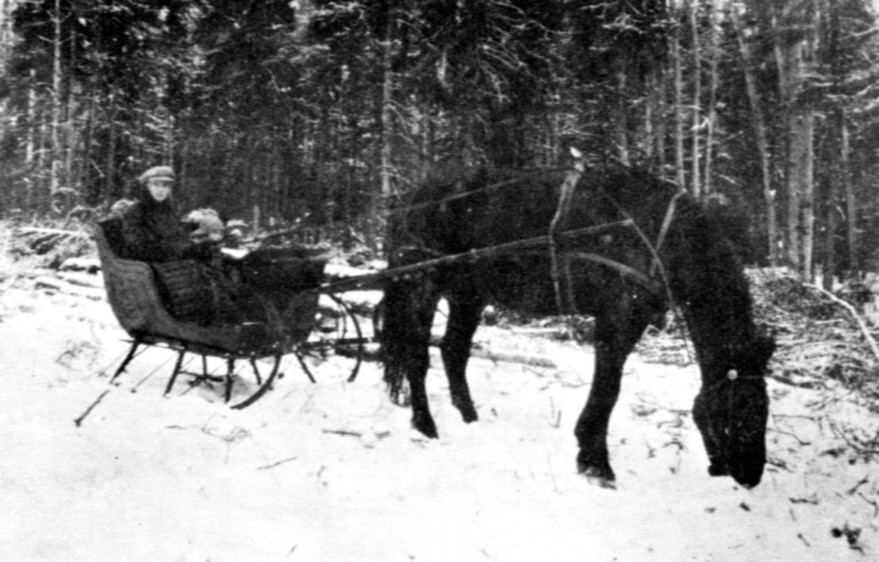 Joe Pickering with little Murray Dixon out for a ride in Clarence Cottom's horse and cutter.
Photo: Courtesy A. Cottom 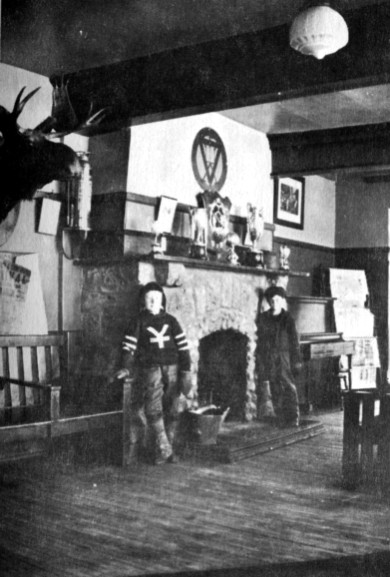 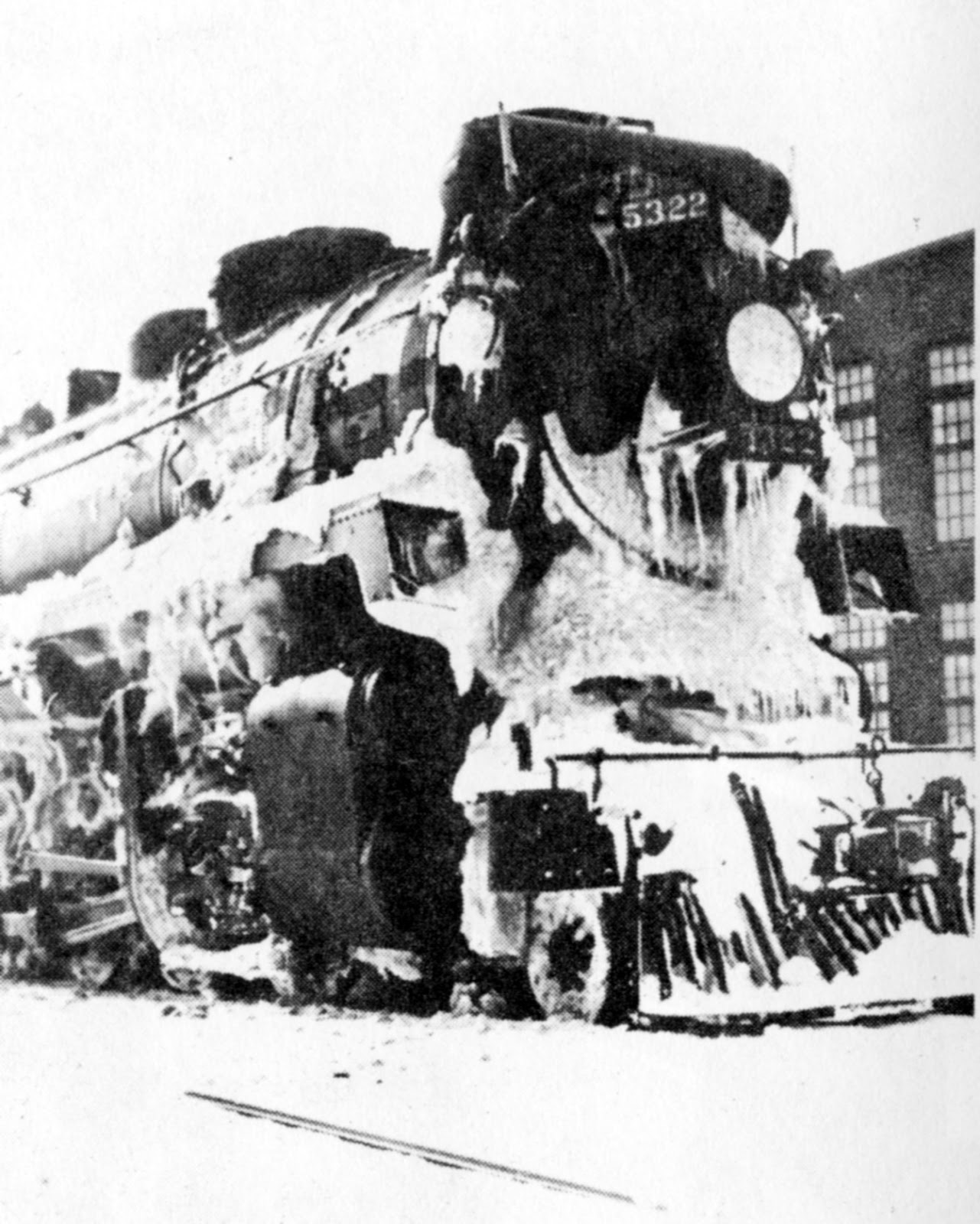 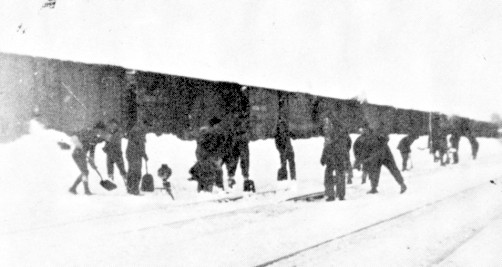 Clearing the switches and removing the snow in the rail yard in the 1930s before machines took over.
No photo credit. 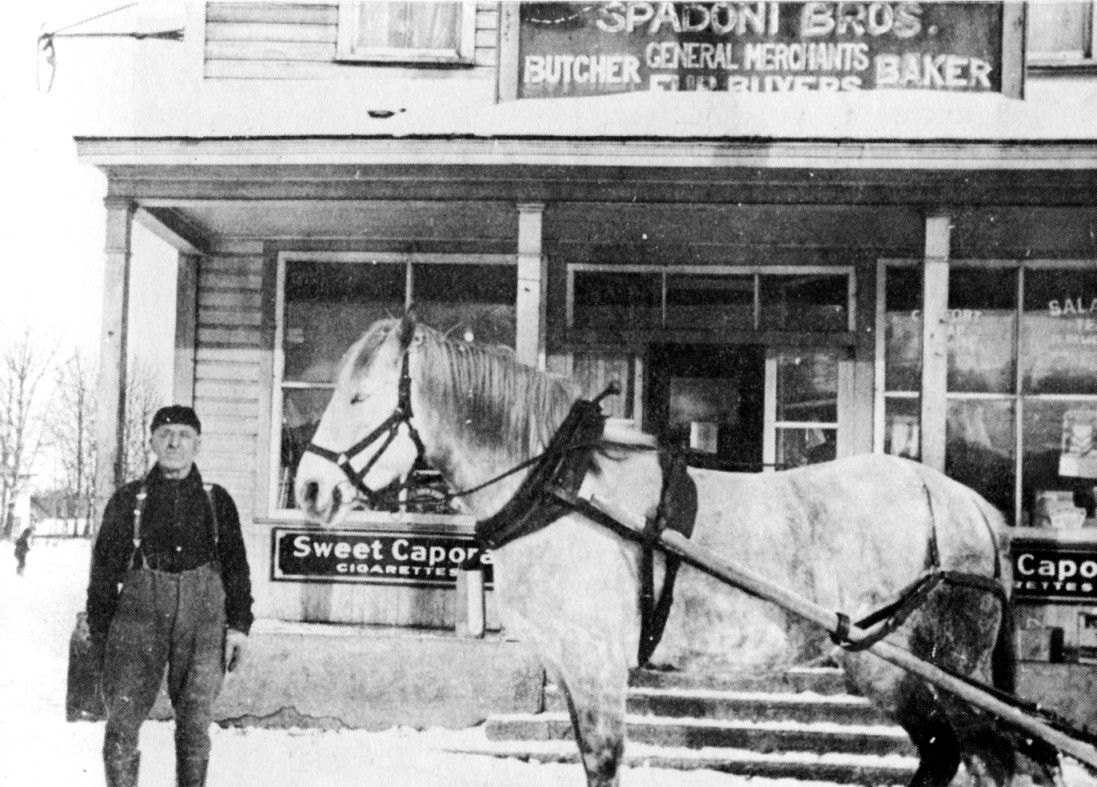 Christopher (Tony) Bittolo ready to take off on his grocery delivery.
This picture will give a clearer view of Spadoni's first store.
Photo: Courtesy N. Bittolo 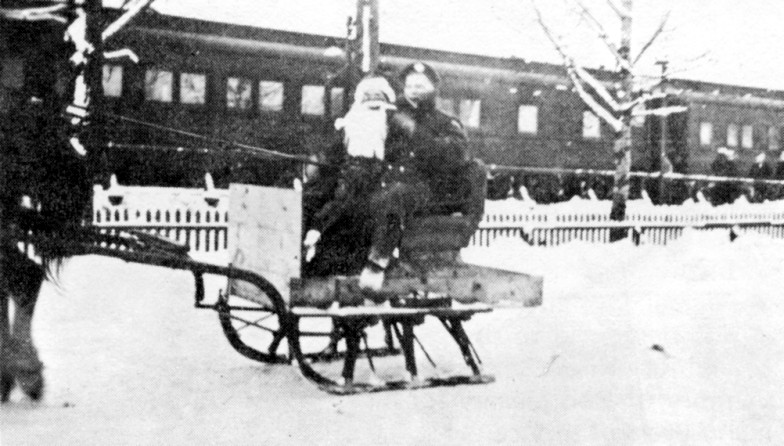 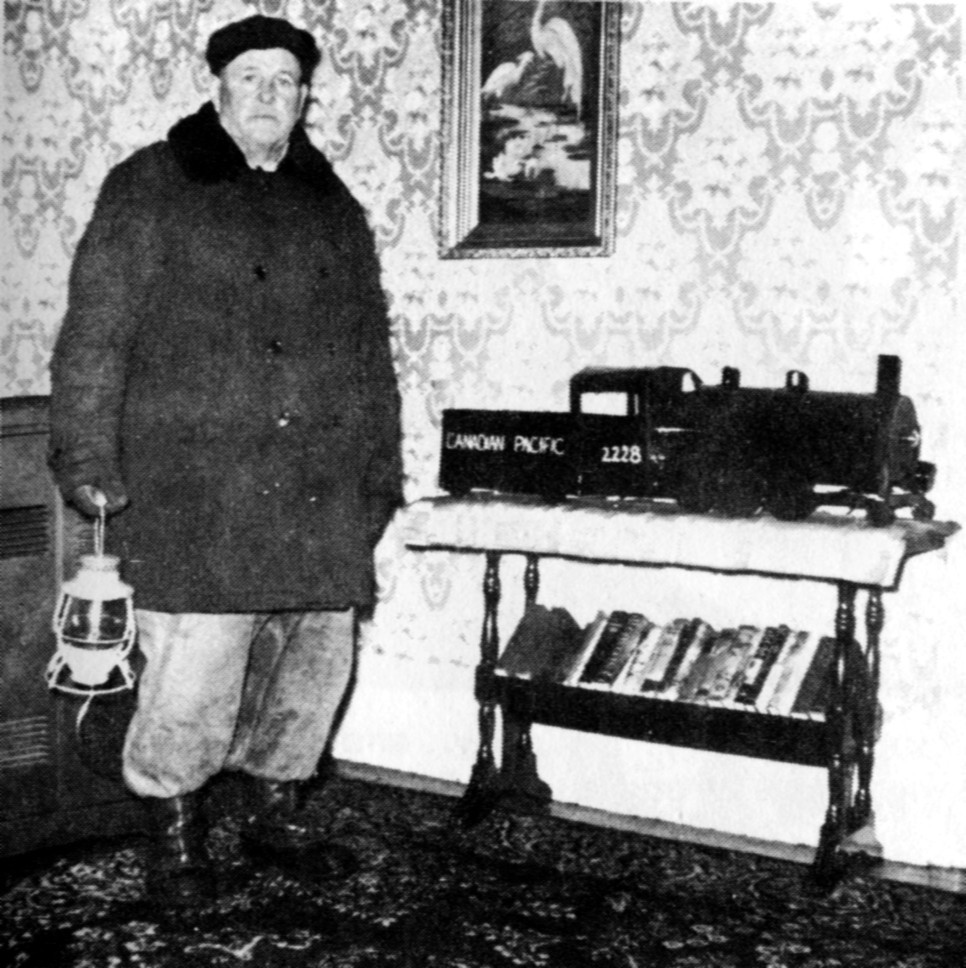 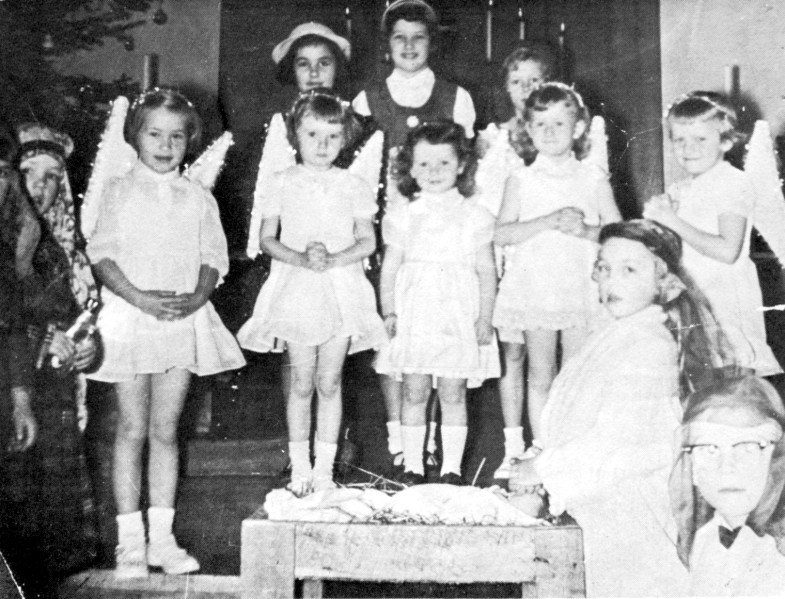 A Nativity pageant presented by the children of All Saints Anglican Church.
Photo: Courtesy H. Riley 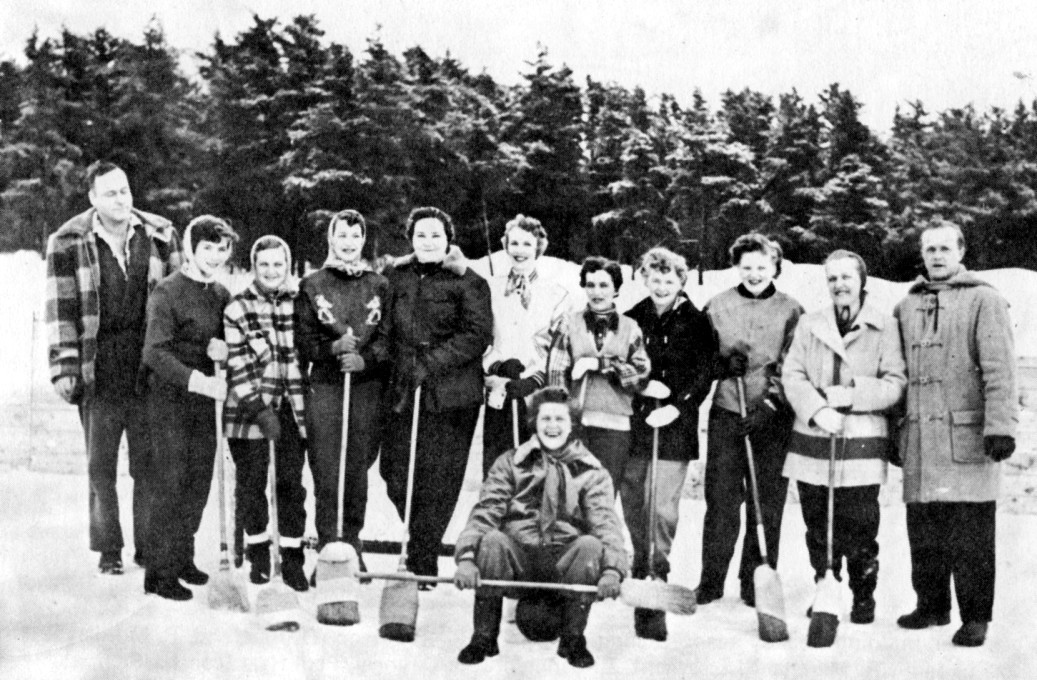 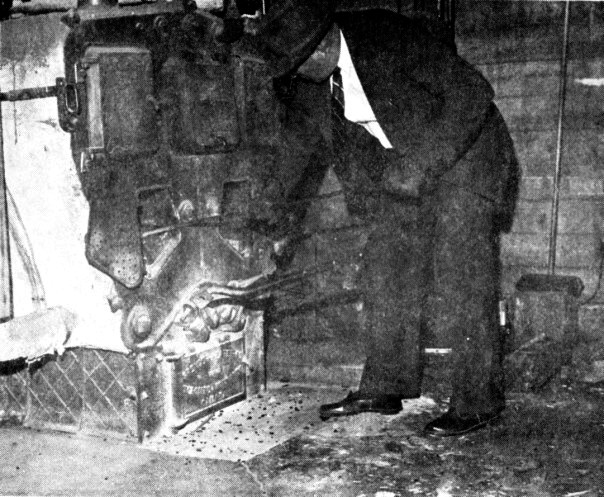 D.V. Rumsey stoking of the Spencer Hot Water Furnace in his store - 1955.
Photo: Courtesy A. Richardson 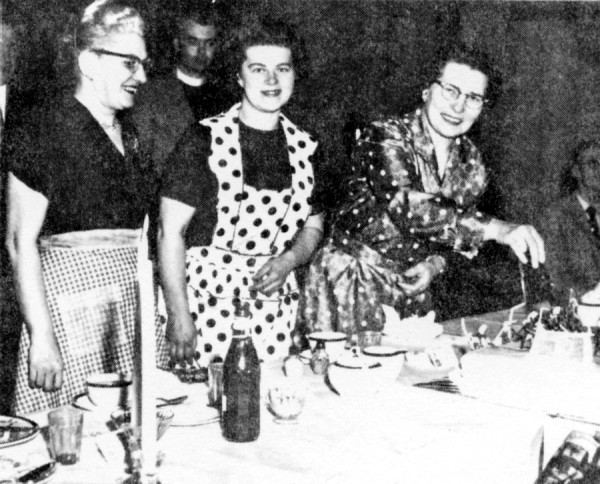 Mrs. Adeline Spadoni cutting the cake at the boys hockey banquet.
With her are Mrs. Irene Pearson and Mrs. Annie Hnatow.
The cake resembled a hockey rink complete with nets and players.
Photo: Courtesy A. Deluce 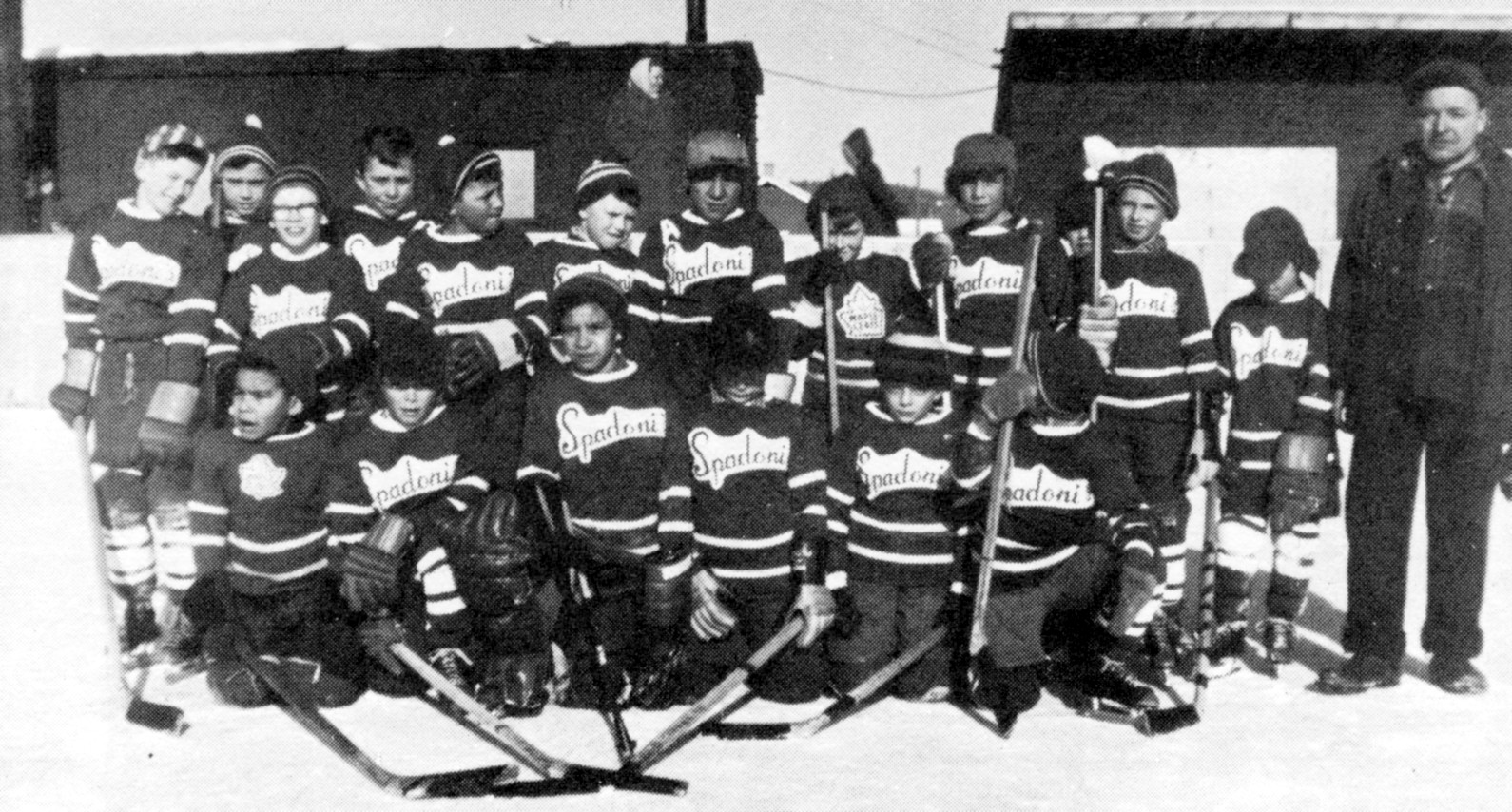 Coach Joe Wawryszyn with his hockey team (the Mice) sponsored by Spadoni's.
No photo credit. 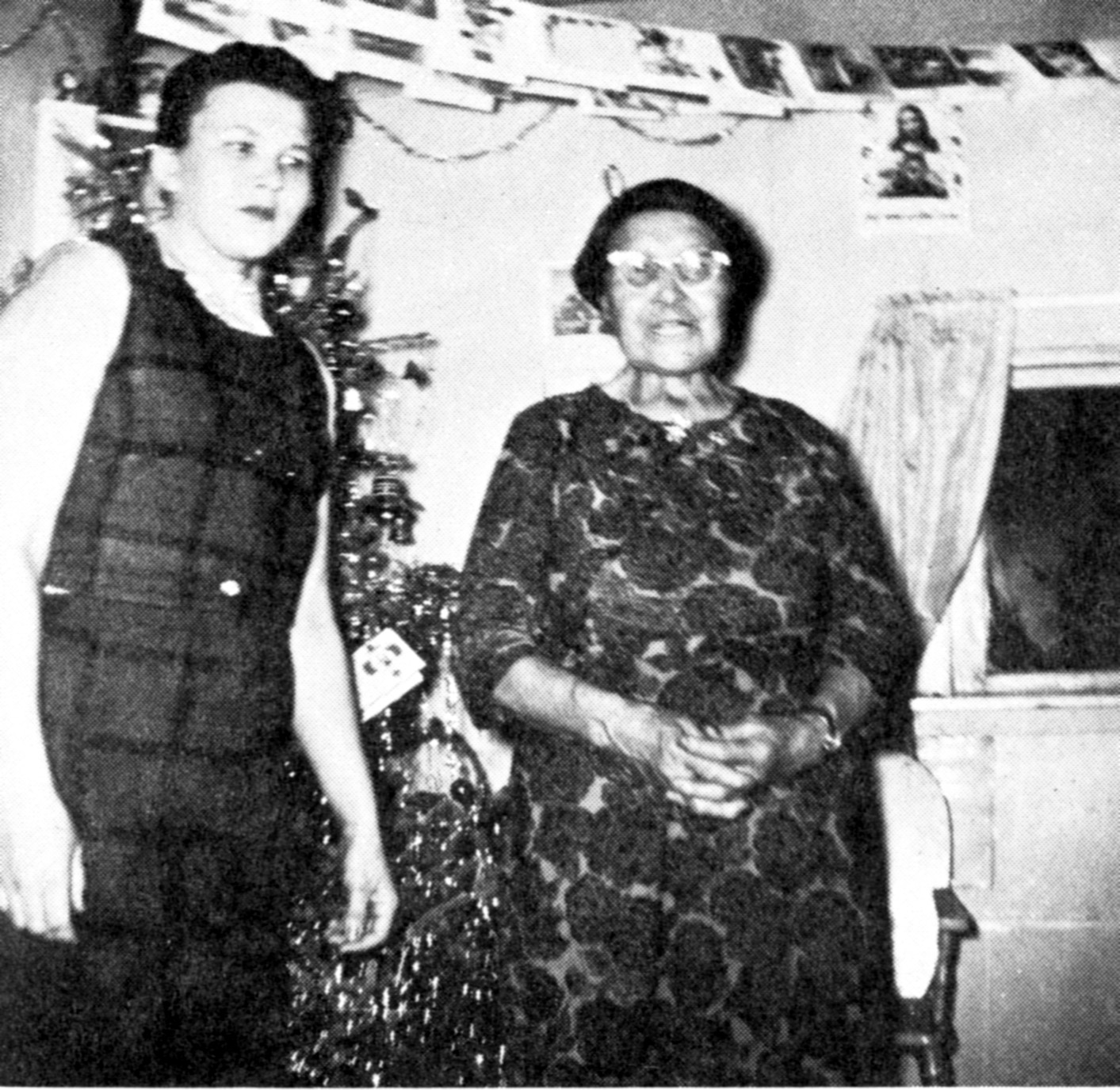 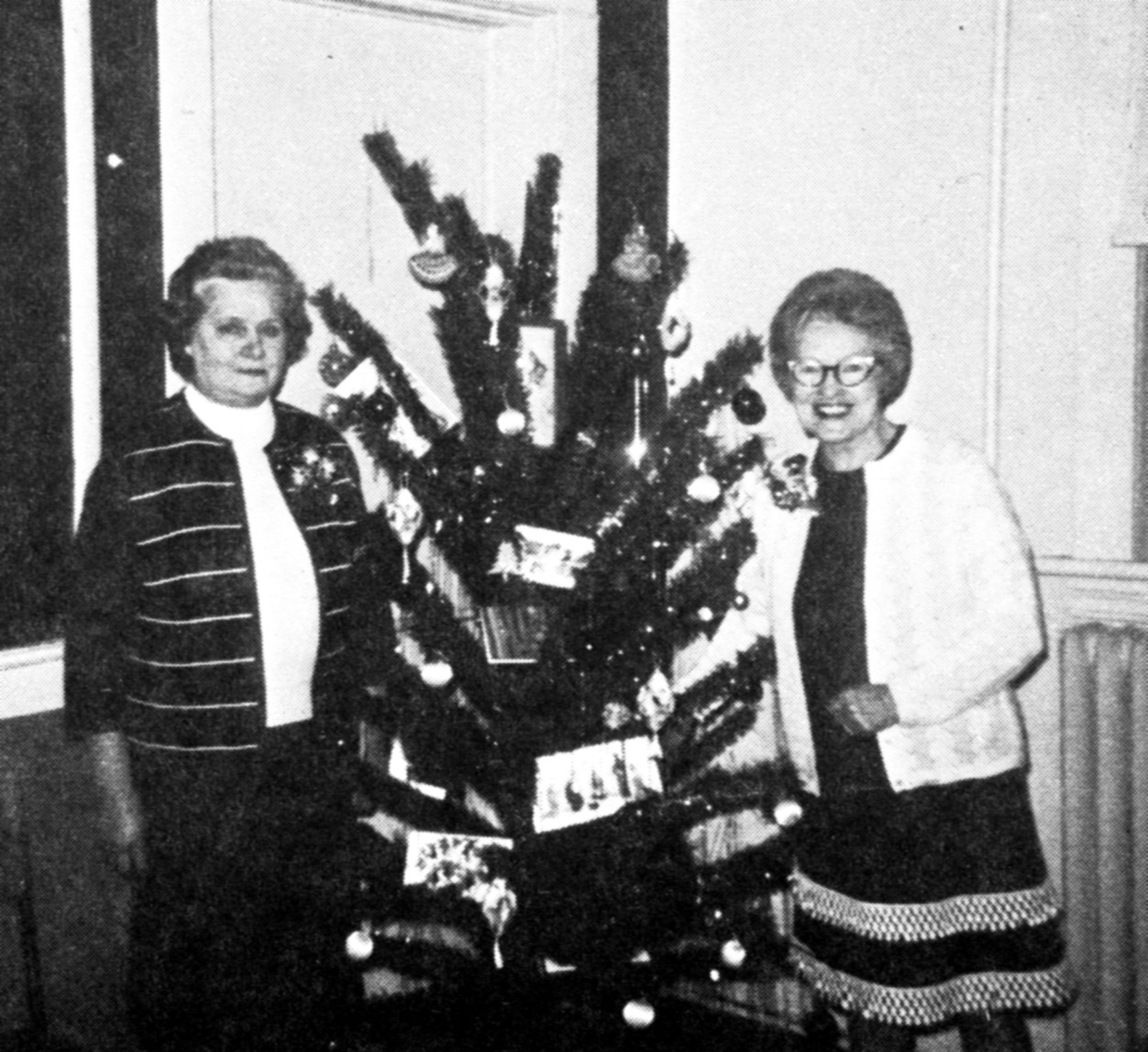 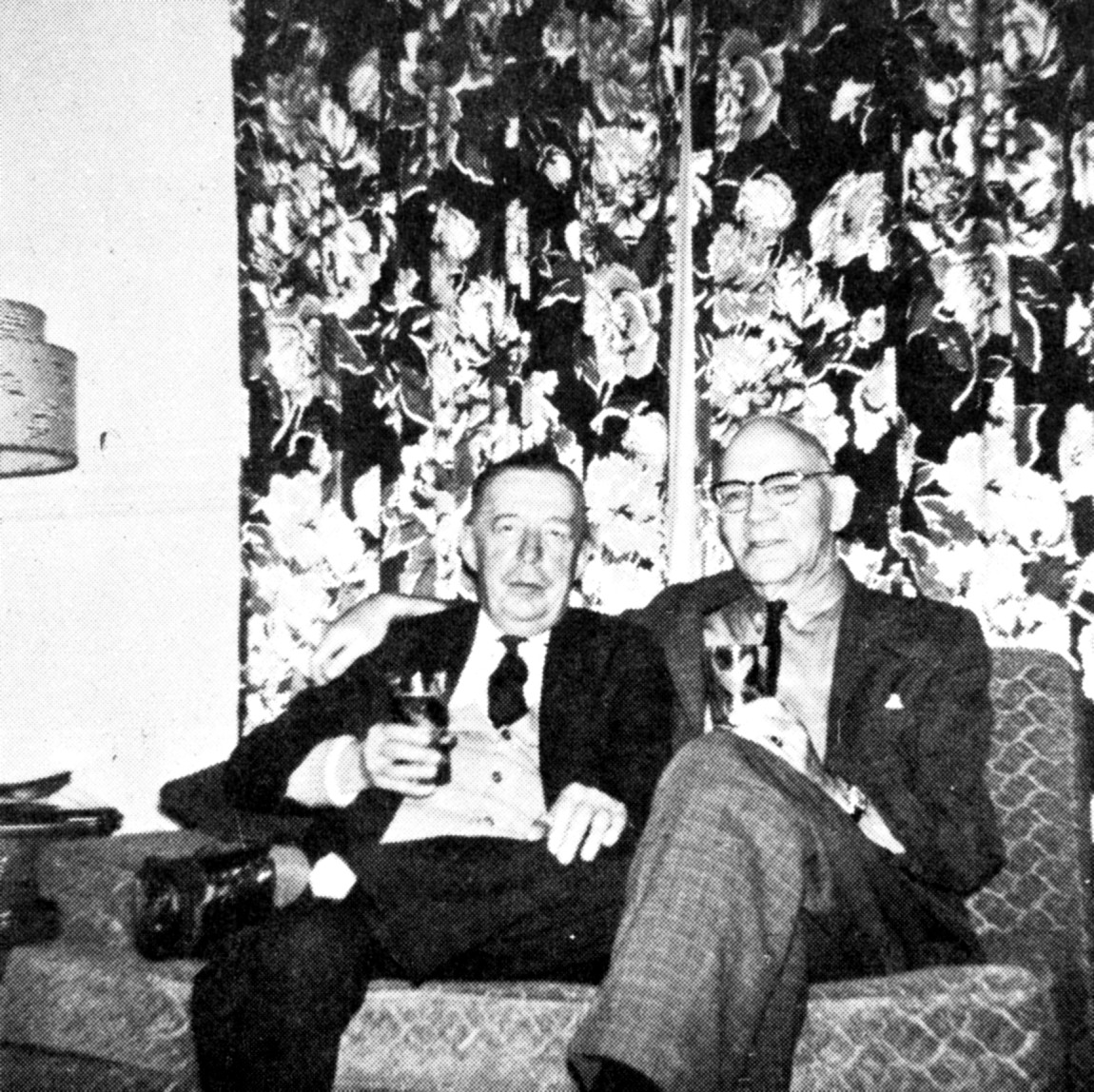