My brother went west by train in 1986. One important project of this trip was to drive the backroads and to document the vanishing wooden country grain elevators in Saskatchewan. In addition, on his way around Lake Superior, he photographed the Heron Bay and Nipigon subs in great detail for me. He spent at least five or six hours shooting out the tailend of The Canadian and recording the location particulars for each photo.

Continuing west, we have departed from Marathon - 'Peninsula' on this 1915 map of telegraph stations. We will be travelling through the most rugged section of the Heron Bay Subdivision - much of it built along the shore of the Lake Superior on solid rock. The westbound Canadian has travelled down the long grade from White River, to near lake level at Marathon (Peninsula).

Variables used for the calculation of equivalent tonnage (the mass to be moved) and haulage capacity (the power available to move the mass) over a subdivision include:


By using the data above, and performing a few calculations using a pencil and paper, yard office staff could balance the haulage capacity of the locomotives (power) with the equivalent tonnage of the train (mass) to ensure that any freight train could be pulled over the subdivision successfully, and without wasting power.

Most of the 'advertised' freights, working on schedules promoted to shippers, used an easier 'horsepower per ton' formula. With the flexibility provided by Centralized Traffic Control (CTC) there was no need to put these schedules in the actual employee timetable.

Looking at the posted train line-up at the Schreiber yard office, Rolly would sometimes view the locomotive numbers and the tonnage listed for a particular train and dismissively state "That's a drag". Most crew members would know when a low priority freight train's power was barely enough to pull the tonnage over the subdivision.

With the morning sun still low on the horizon, The Canadian in 1986 edges along its 100 year old ledge - blasted into the cliffs along Lake Superior.


Rock slide fence 'protects' the track when these wires are broken by rock tumbling down from the cut above. Signals protecting the susceptible zone of track are reset from 'proceed' to an indication warning that the train must be prepared to stop short of an obstruction on the track. In the past, rock watchmen were employed to walk these remote sections of the track on a regular basis, particularly before passenger trains were due.


The rock structure containing Mink Tunnel was left as a buttress to the rock formation along which the line had been blasted. This view toward the head of Mink Harbour (and Mink Creek) shows the original type of wooden trestle used to bridge across low areas of new construction. These gaps would eventually be filled by dumping rock from loaded cars positioned on the trestle itself. The idea with Canadian wilderness railways was generally to build a functioning through line first .. then worry about 'improvements' such as 'filling' trestles when more money was available. Trestles might last for a couple of decades before they would need replacement - so they provided a good stop-gap for railway builders during Canada's railway boom.
This gharishly colourized old postcard (I toned it down) shows the results of 60 years of improvements to the line. The trestle has been filled and Mink Creek is no longer naturally emptying into Lake Superior.

Notice the wooden 'telltale' to the left of the track and just outside the tunnel - a statutory warning of an approaching restricted clearance to any crew members working on the car roof walkways. A fringe of knotted ropes dangling from the hangman's assembly was designed to strike and warn the rooftop crew member on a moving train so they could flatten themselves on the roof before the obstruction was reached. Particularly in dense fog or at night these devices had the potential to save lives.

In our picture above, the railway management and train crew have detrained and are watching to see if the photographer will break his neck .. the former are standing at the Mink Tunnel sign. Meanwhile, the lake breezes are blowing back the steam from the popped safety valves on the locomotive as it stands with a hot fire. 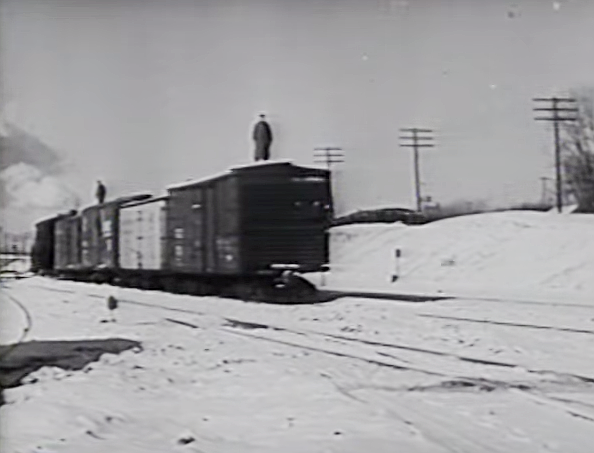 Before portable radios became common in the 1970s, switching 'commands' had to be relayed by hand or lantern signal to the engine crew. In a screen cap from the safety training film 'Why Risk Your Life?' on YouTube, a Great Northern crew in the 1940s shows how roof walks were often used during switching operations.


Looking at the switch points, you can see that the dispatcher in Schreiber is putting my brother's train into the siding at Coldwell. For a number of reasons this is my favourite station on the line.


Running its way down the steep hill from Neys, this freight is twisting and turning its way through Coldwell and its descent will continue until it almost reaches lake level near Mink Tunnel. It is a lot easier to stop and start The Canadian than this guy. The engineer's wave indicates no problems spotted with our train.


Obsolete railway station names are not published in the employee timetable ... but they are sometimes used because of tradition (e.g. use by older employees) or because they identify an important point on the railway. While 'Ripple' has no remarkable features, 'Neys' represents the crest of a significant grade in both directions.

Ever since railway operations began, the Heron Bay Subdivision has been cursed by this bridge located on a 30 mph curve ... and for eastbounds ... an immediate trip up the ruling grade for the subdivision. My brother is starting to fight the morning sun shining directly into his lens. But I have included this photo to show how abruptly the grade starts. Trains can't take a decent run at the ruling grade.

This was once the location for 'great heroics' by some spareboard headend trainmen (the most junior crew members imaginable). A defective diesel unit on an eastbound might shut itself down - thus reducing the haulage capacity of the locomotive consist - we studied 'power' at the beginning of the post. To help deal with this, the engineer would curse, pray ... and then show the lowly trainman how to take the trailing locomotive off 'isolate', how to restart it, etc. What else would he do with his time? Once brought back to life, the revived unit might only work for part of the way up the hill, but that might be all the help the engineer needed to avoid a stall or doubling his train.

Every time I was asked to do this on an eastbound, it was always necessary to travel along the icy locomotive running boards and over the inadequate lurching steps between the locomotives while travelling over this bridge. As always, the final instructions were "Be careful and hold on!".


Jack Fish was a major CPR depot for bituminous coal for locomotives. The coal was brought to the Jackfish harbour from Pennsylvania by lake freighter. The coaling dock to unload ships near mile 99.9 was in service from 1895 until 1948.

This open area above (today's Jackfish at mile 98.2) was known as the New Yards where coal was stored in cars or stockpiled for the winter. This yard was expanded during both World Wars and could hold 600,000 tons at its peak capacity. (information from: A History of Jackfish; Jeanne Marcella; 1989; Terrace Bay Public Library)

Like the previous Mink Tunnel postcard, the train is stopped, and the photographer has scaled the rocks. This time the telltale is made of steel, probably with a dangling fringe of durable aluminum rods.


The cairn reads - all upper case:
Driving the Last Spike
between
Montreal & Winnipeg
May 16th 1885
was re-enacted here
by veterans and some
original participants
May 16th 1935.

Lavallee goes into greater detail if you are interested.

As we follow along, the headend of the Canadian is starting its way around Moberley Bay. At Moberley Bay in the late 1970s - even on the coldest winter day - the cab became full of the choking sulphurous stench from the waste being poured into the Lake Superior from the Terrace Bay plant.

The bay provided an attractive view of long freight trains during the era of vans (cabooses) as the headend and tailend crews could usually see each other across the bay ... moving in opposite directions. I remember an engineer of the PAT train walking across the cab to admire his train early on a beautiful sunny morning. The salutation "OK around the bay, Extra xxxx west!" was usually made at this point by the headend.

The sun is causing my brother grief, but you can see the raised TERRACE BAY lettering on the lower level of the station building.

The Terrace Bay station is still in sight beyond the extra-tall absolute signal. In 1939, King George VI and Queen Elizabeth (later the 'Queen Mother') crossed Canada by rail and also visited the US and Newfoundland to rally support for the coming conflict in Europe. This ring-bound book contained standard CPR and CNR public relations photos and descriptions for souvenir presentation to key participants and also for press use.

While the Heron Bay subdivision sees intermodal, crude oil and grain traffic today, it has played many different roles in its past history.

For the record, the Royal Train was scheduled to be in Schreiber 1325-1335hr Tuesday, May 23 - just enough time for a crew change and a brake test. You can find photos showing that there were royal walkabouts at both White River and Schreiber.