Before researching this page, I would have answered none of these 5 questions above correctly ...

2. The telegraph signals representing the letters of the alphabet were invented by ...

5. In San Francisco, Telegraph Hill was named for ... 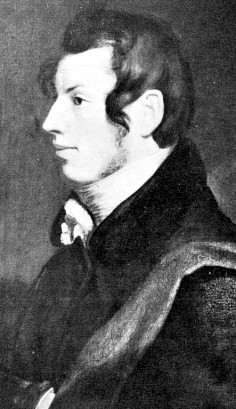 
... born in Massachusetts. His self-portrait is shown above.

After Yale, between 1811 and 1832 Morse spent a total of 7 years in Europe (2 visits) to study and to paint. While back in America, he was reasonably successful in the eastern US as a travelling portrait painter. However, the cadre of people who 'needed' their portraits painted was a shallow market which limited his ability to settle down with his family. Morse stubbornly clung to the contemporary European idea that only history and antiquity were worthy of artistic representation. Unfortunately for his future as a classical painter ... most Americans weren't at all interested in history or antiquity.

It was at age 41 that Morse became inspired to invent the 'magnetic telegraph'. This was based on discussions he had with some Europeans as he sailed back from France in 1832. He had no knowledge of things electrical, his wife had died, and he had three children to support ...

To save time, insert a movie montage at this point of about 25 soundless scenes, use peppy 'montage music' for the audio:


Final scene of the montage: Morse writes and stamps his name on everything.


Alfred Vail smiles, shrugs and pats Morse on the back.


The codes for common letters were short ... while rarely used letters used the 'leftover' longer codes.

To figure this out, the shop of a professional printer was visited ...

If a metal printing slugs for a given letter (e.g. 'e') were kept in great quantity ...
that letter was assumed to be common and it received a code which was quick to send.
'e' took one 'count' to send.

Note: Some 'continental' changes were made to the code when the Germans and other Europeans began using it ...

because when they do their 'Europe Talk' ... like, they make different noises from us, eh?

'Who used which code when' ... is an interesting historical puzzle to solve. 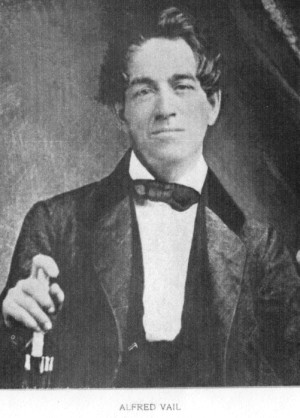 Modest Alfred Vail ...
Neither did he expect credit for helping Beethoven compose the catchy
"V" code opening notes for his Fifth Symphony.

Morse rushed off to England to patent his inventions there in 1837 ...


In England, Wheatstone and Cooke had already patented an electromagnetic telegraph and it was working on a railway in the summer of 1837.


In Germany, Steinheil had invented an electromagnetic telegraph in 1837. In the same year, he discovered the 'earth return' while trying to use the rails of a German railway as the conductors for his telegraph.

Schilling of Russia had invented a telegraph back in 1820, and the Czar had deemed it a potentially subversive invention. Because of the telegraph, when the Czar Nicholas I  (reigned 1825-1855) died in 1855 at St. Petersburg, the event was announced in the British House of Lords just a few hours later.

It was American university professors Leonard Gale (1800-1883) and Joseph Henry (1797-1878) named above who had provided essential technical advice and materials which made the development of the Morse system possible.


The general points to consider here are ...

And the phrase 'What hath God wrought?' ... Morse's legendary first telegraphic words in 1844 ...
from Washington to Baltimore and repeated back by Vail... was someone else's idea too.

If you are visiting this blog via an internet connection from ancient Greece, you will not need the following 'translation'.


And is anyone self-naming, taking full credit for, and making money from the invention of ... 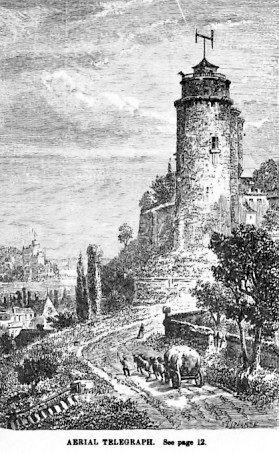 In France, the Chappe telegraph.

Claude Chappe developed a telegraph system in 1793 from Paris to Lille.
These purpose-built stone towers with Chappe's two signal arms on top came later.
The next tower in the relay is just across the river over there.
Telescopes assisted in viewing the 'distant writing' of the signals.
France retained this proven system for some time after the electromagnetic telegraph became available. 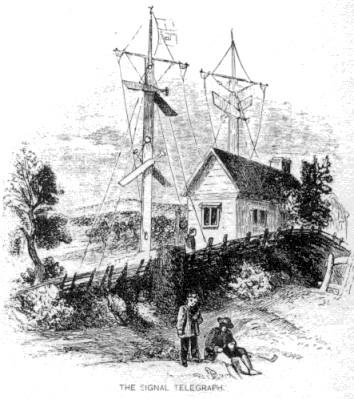 A telegraph system designed by someone else ...
The British Admiralty had a set. 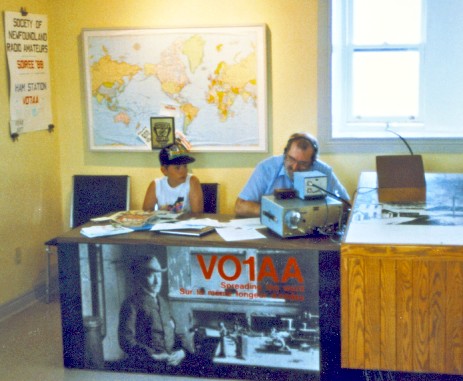 
At 2030hr on warm and humid July 7, 1988 at the Cabot Tower on Signal Hill, St. John's, Newfoundland ... the demonstration Ham Radio station is pulling in the Ukraine. Marconi's image reminds us of the historic wireless transmissions from Signal Hill.

Minutes later, a guy with a square-headed management hair-do shows us why Signal Hill was so named ...

Make a note of the approaching sea traffic on the seaward side ... 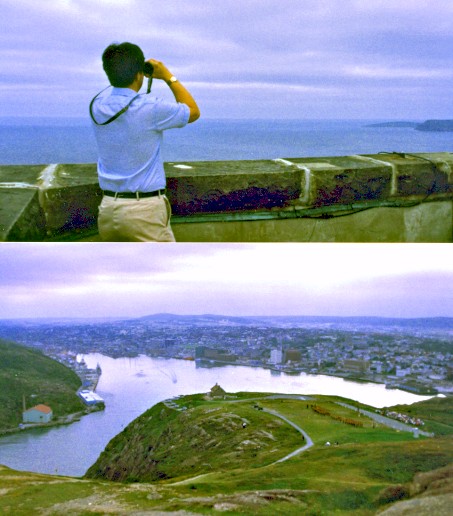 ... and pivot to the harbour side of the tower.
.. Signal to the red-coated garrison on the field below and to the settlement if there is any news.
For example: expected commercial traffic or unexpected enemy warships.


Telegraph Hill in San Francisco (and many others) were named for manual telegraphy ... long before wireless telegraphy took over the high ground.

Consider some of the independent and published discoveries which made the telegraph possible ...


Developing a sustained source of electric power ... that is, beyond static electricity.


Used chemical action to produce galvanic currents in 1800.
Used zinc, copper and an electrolyte to make cells and batteries. 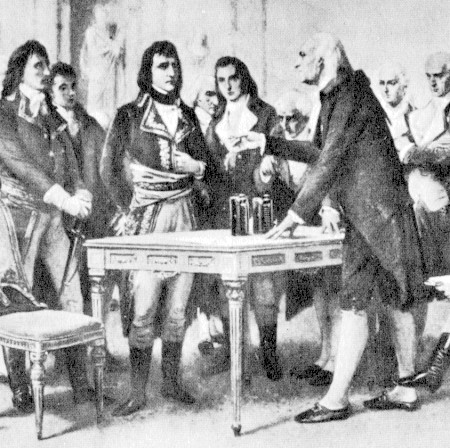 Volta explains to Napoleon that it is possible to create a steady current.
' ... it is like a little windup bunny with a drum ...'


Investigated electric circuits and developed Ohm's Law (1827) ...
This explains the relationship between current flow, voltage 'pressure' and circuit resistance within an electric circuit.
e.g. Current = Voltage divided by Resistance ... in the appropriate units of course 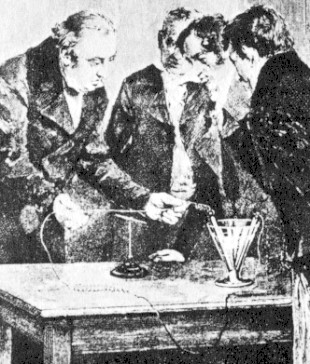 That retro-styled cone-shaped vessel is his battery. Oersted noticed that a compass needle was deflected by a nearby electric circuit ... so ... the current is surrounded by a magnetic field.

It looks as if he bought his wires and stuff at Radio Shack ... or Circuit City. 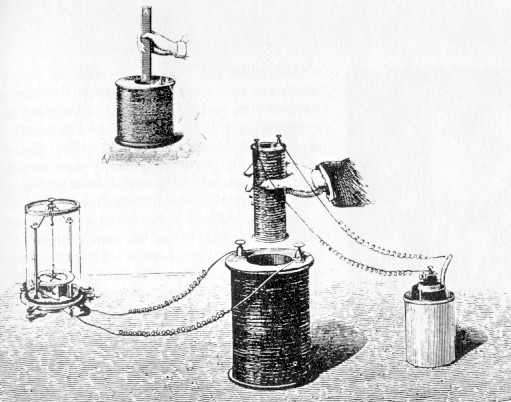 In the early 1830s Henry noticed that moving a bar-shaped magnet near a closed loop of wire ... could produce current in the latter (top).

At the same time, unknown to Henry, Faraday was doing the same type of work in Britain.

When magnetic forces (i.e. their lines of flux) change relative to a wire, they induce a current.
That's what 1 and 2 have in common.

Henry was an modest man of science who contributed to diverse scientific endeavours later in life. Henry's experiments also allowed him to note the 'transforming' of electrical current ... i.e. varying the final current and voltage by using different sized secondary coils.

Joseph Henry always regretted not being recognized for his original unpublished discoveries ... which had actually just preceded Faraday's. (Henry also probably kicked himself for never getting a piece of the remunerative cellphone battery recharger transformer market)

Henry also encouraged and coached Morse and Bell when they came to him for help with their inventions. They both needed small, strong magnetic coils for their devices. 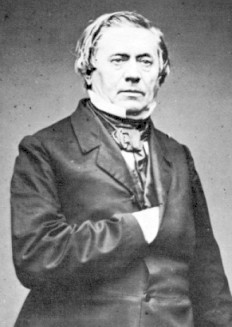 
Below are a couple of illustrations of devices based on Morse's patents. 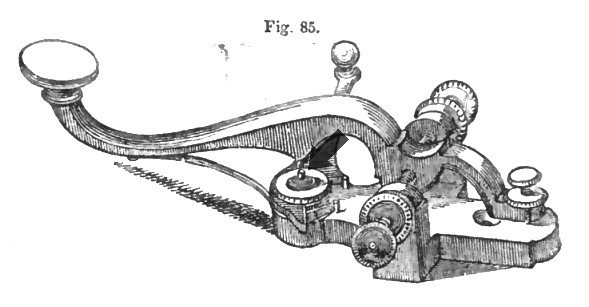 
The spring-return telegraph key is quite typical ... from an 1860 publication from Britain. The operator depressed it to make the electrical contact at the arrow. This is given as an example of a 'Morse patent' which had already been invented by someone else. 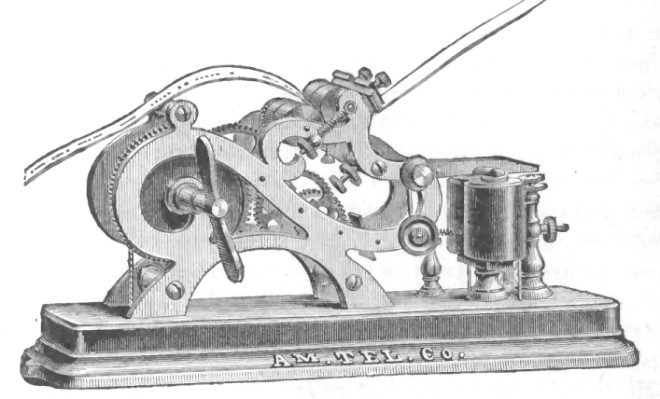 Telegraph register from the late 1800s.

The electromagnets (right) clicked as they responded to the distant telegraph message. There was a winding key for the clockwork tape-regulating mechanism (at the left). The clockwork mechanism drew a paper tape through the tape rollers near the inscribing stylus. There, the stylus, driven by the electromagnets, recorded the official message - pressed into the moving tape in code.The clockwork regulated 'tape feed' had to be started manually when a message was to be received, and a weight hanging below (see the suspending cord at the lower left) provided the main pulling force for the whole operation.


Was this type of device actually used on North American railways?

The Grand Trunk Railway of Canada
Rules and Regulations
for Operators and Station Masters
working the Telegraph Lines, 1855

39. Registers must be kept clean and always in good running order.

47. The register paper must not be allowed to run unnecessarily, and the lines must be run as closely as possible to prevent waste. [closely = efficiently]

51. The originals of all messages must be neatly filed each day, with the date written on the band; and be preserved in the office from which they are transmitted.


19. The taking of messages by sound alone is prohibited. In all cases, the register paper must be allowed to run, and the communication when copied, compared therewith. The receiving Operator will be held responsible for errors, unless, by producing the register paper, he can show that the blame rests with the transmitting Operator.

[Rule 19 ... emphasis as indicated in the rulebook] 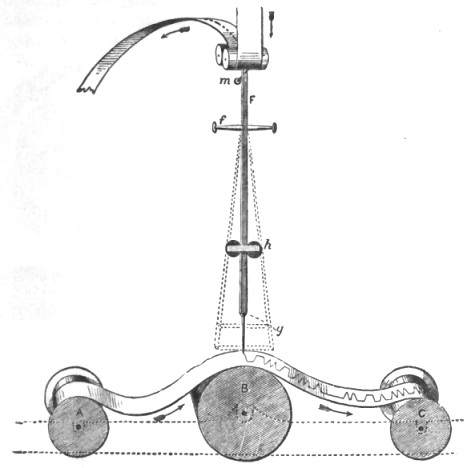 As originally conceived circa 1837, the received message was to be printed or inscribed as a graph of the electric impulses (lower). This schematic drawing is intended to contrast the two Morse methods of recording messages on moving paper tape. 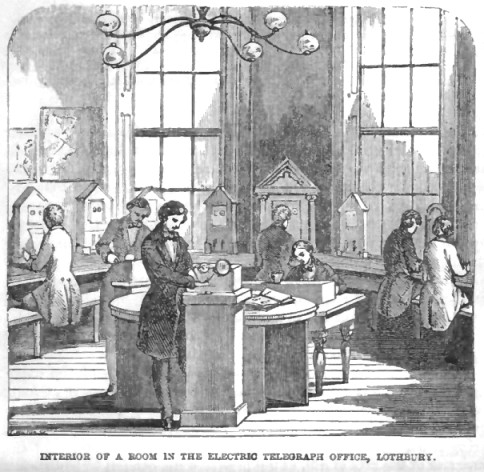 
In Britain there was no interest in patenting Morse's equipment or code. Germany was the only major European country to show a moderate interest Morse's ideas. Above, circa 1855, the 'agents' are working at their Double Needle Telegraphs. Signals were perceived at the receiver by staring at the deflections of a glorified galvanometer needle. Each character was differentiated by ... combinations of left or right deflections ... and short or long periods for these deflections.


Both the British and French preferred their own local technologies and code to what Morse had developed.

Earlier versions of these British 'Wheatstone and Cooke' Needle Telegraphs had 5 needles, but primitive underground wire insulating techniques, combined with the need to maintain *6* underground wires ... forced changes after the first pilot projects.

Eventually, bare wire strung from poles between stations with an earth 'ground' proved much more efficient. With grounding to earth ... only a SINGLE wire was finally needed between many moderately busy telegraph stations for Morse-style equipment.


Perhaps more than is warranted, the following passage of the period exalts the homing abilities of the Refined Victorian electrons, once the signal reaches its destination ... as the line potential equalizes into the buried 'ground return' plate at the destination.

" Of all the miracles of science, surely this is the most marvelous. A stream of electric fluid has its source in the cellars of the Central Electric Telegraphic Office, Lothbury, London. It flows under the streets of the great metropolis, and, passing on wires suspended over a zigzag series of railways, reaches Edinburgh, where it dips into the earth, and diffuses itself upon the buried plate. From that it takes flight through the crust of the earth, and finds its own way back to the cellars at Lothbury !!! "