Switchbacks and Tunnels in the Cascade Range 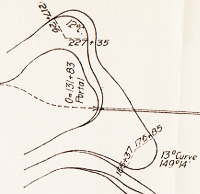 Civil engineers used switchbacks to lift some main line routes over mountains as the time-consuming process of constructing tunnels was completed.

The book below is available at archive.org . While researching some aspects of Great Northern construction in the Cascades, it occured to me to check my own copy. In fact, a diagram showed the first Cascade Tunnel and the GN switchbacks.

I have also included the author's professional perspectives on the construction of tunnels and switchbacks. 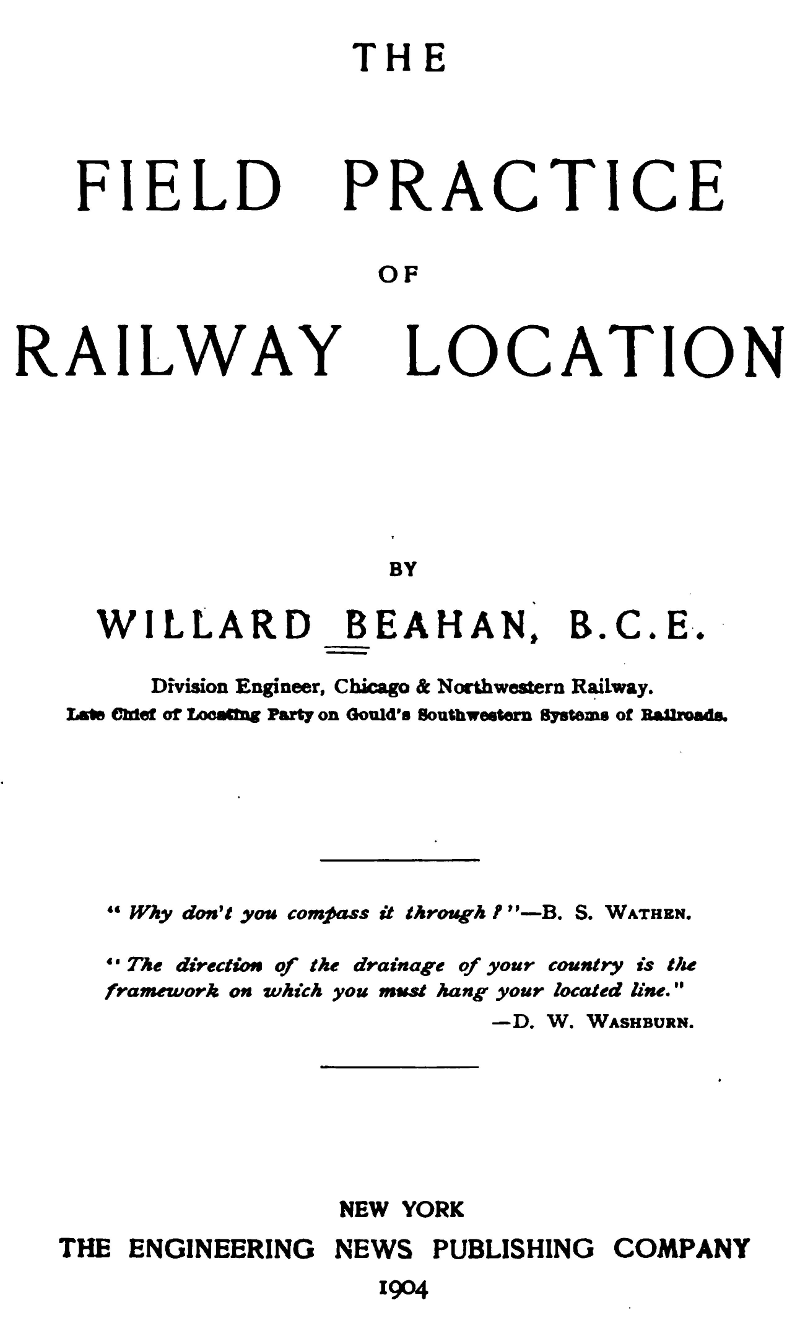 The Northern Pacific Railway opened its Stampede Tunnel in the Cascades in 1888.

The Chicago, Milwaukee, St. Paul and Pacific Railroad built its line through the Cascades at Snoqualmie Pass in 1909.
Also known as 'The Milwaukee Road', its Snoqualmie Tunnel was completed in 1914.

Both the second Cascade Tunnel and the Stampede Tunnel are in operation in 2018.
The Snoqualmie Tunnel forms part of a recreational trail.

Until their tunnels were complete ...

On the circa 1912 map below:
Seattle, Washington is near the north-west corner.

In 1886, here is the surveying and locating party for the switchbacks over the Cascade Mountains
... they were used before the completion of the Northern Pacific's Stampede Tunnel.

Below are the sections from the 1904 book on railway location.
Some of the concepts assume the reader has a civil engineer's perspective from the 1880s. 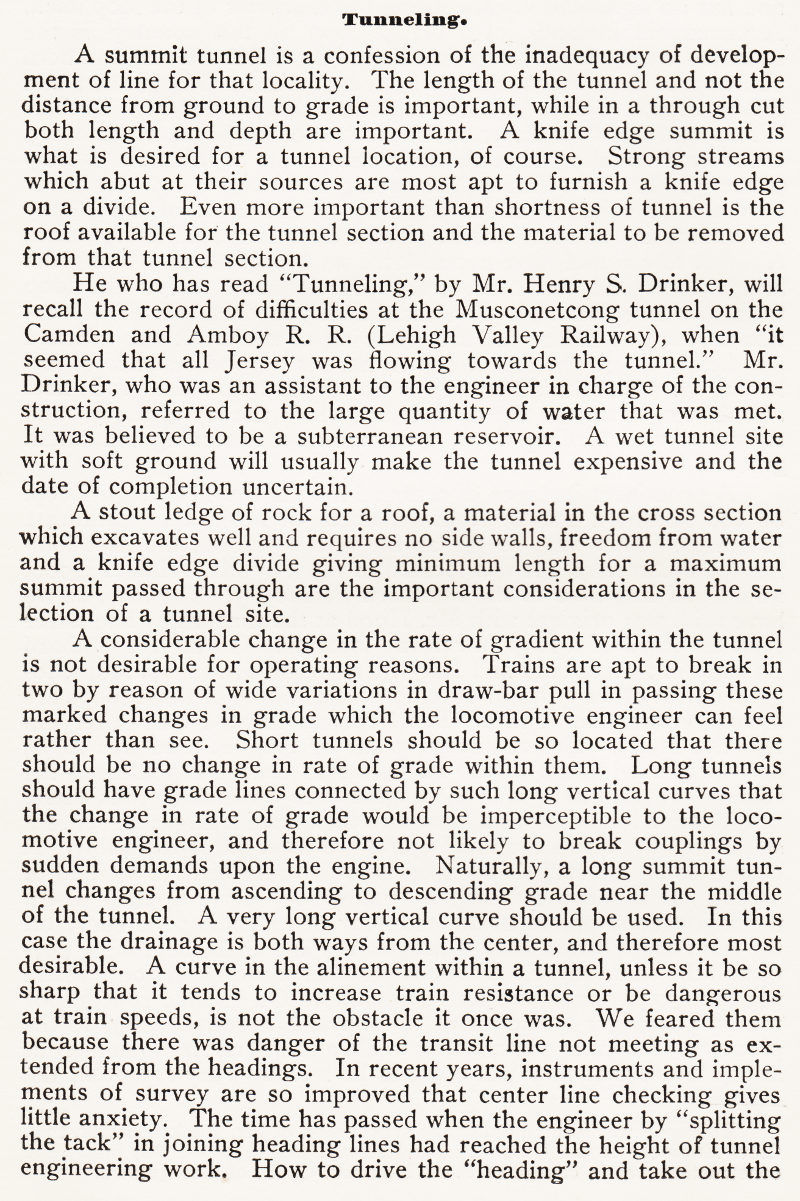 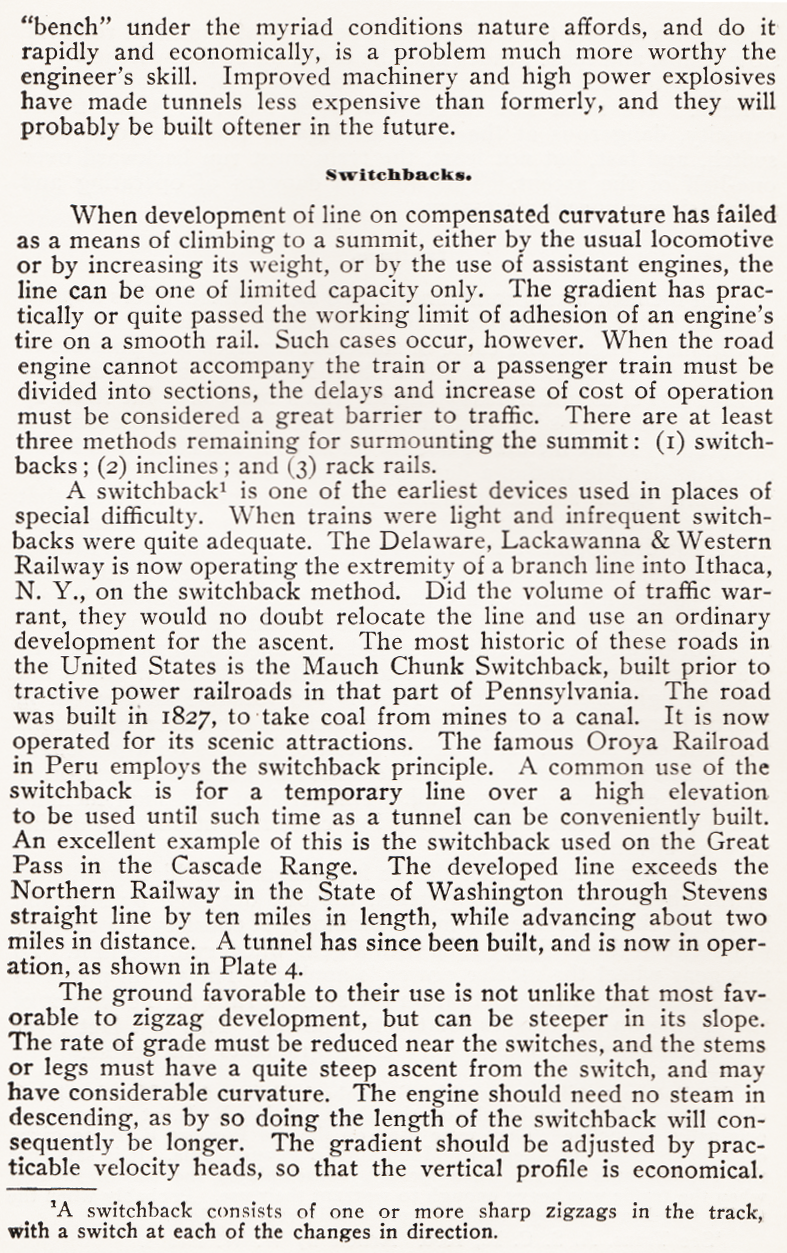 Below are illustrations showing details of  the Great Northern Railway's route over the Cascades. 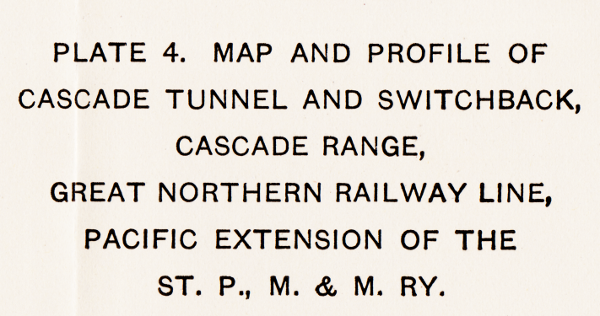 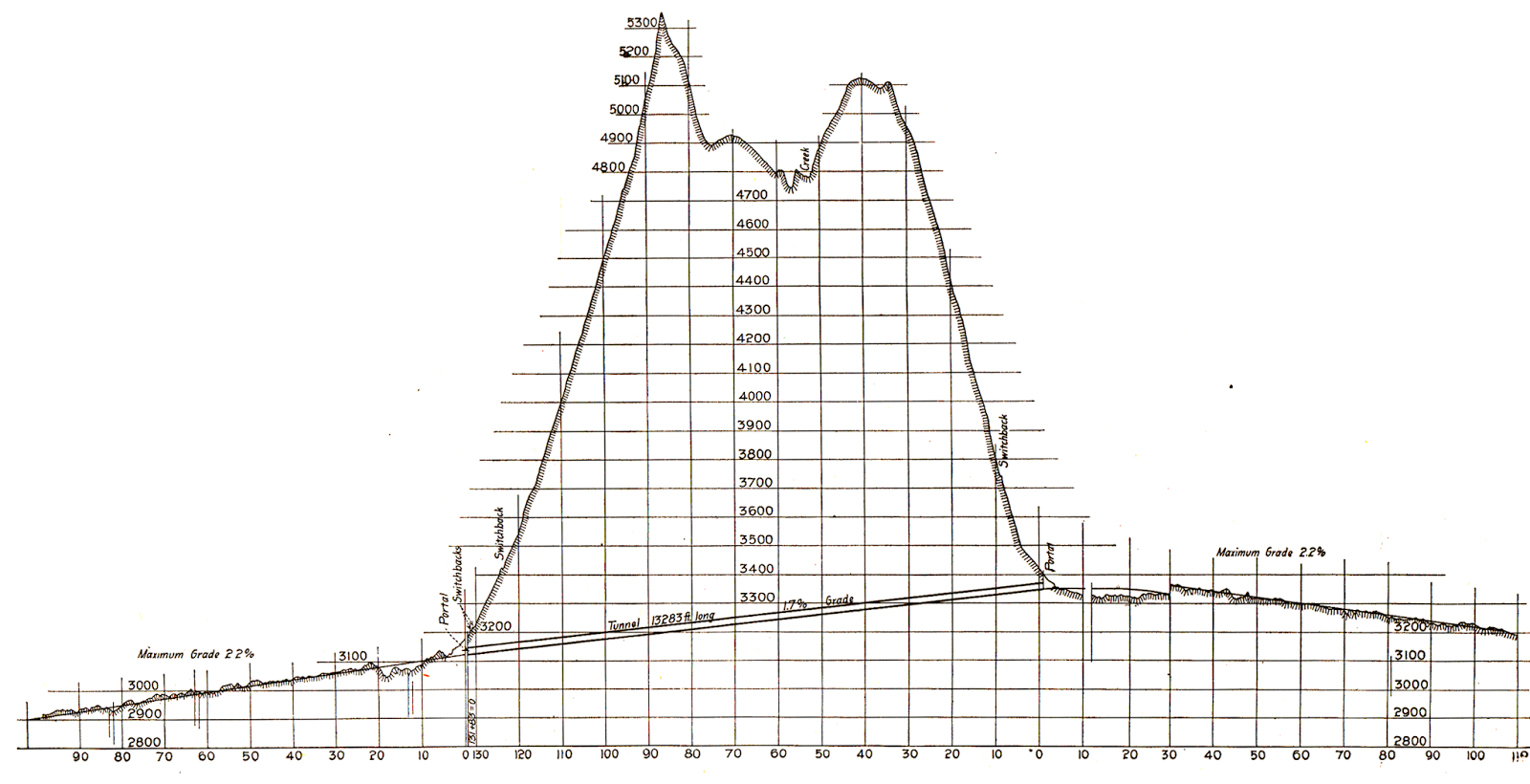 
The Northern Pacific's Stampede Tunnel construction during 1887 and 1888.

In 1887, the summit of the switchbacks over the Stampede Tunnel area.

Presumably, the upper track curves around that rock cut, to edge along the mountain, until it reaches the other (i.e. descending) set of switchbacks. The reason for the steep pocket track with its stub switch is unclear ... Perhaps it allowed light power or a single engine and car to meet or pass a standard switchback movement?

From the Spokane Falls Morning Review May 5, 1887. 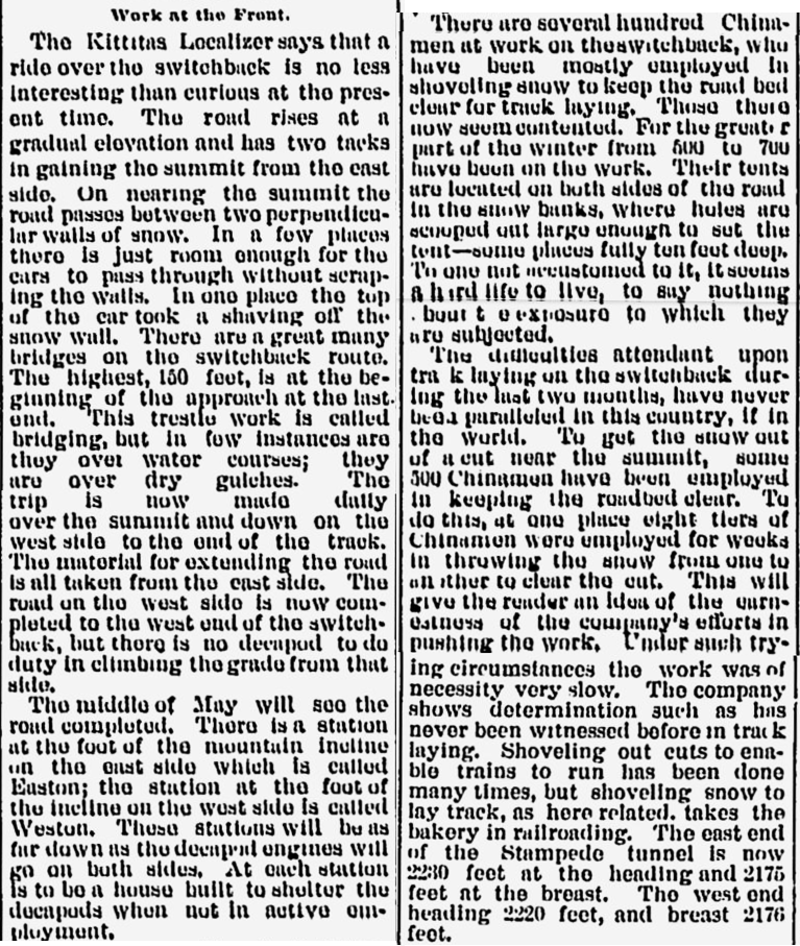 An apocryphal story suggests that the Stampede name originated from the actions of the first (we assume, white) workers, as they left the worksite to escape the methods of a particular boss.

Another supervisor quipped he had three teams working on the project: One arriving, one working, one in the process of leaving.

Trains of only five cars (passenger or freight) were taken over the switchbacks at a time. Obviously, this restriction limited main line through traffic until the tunnel was completed. Both of the two 2-10-0's were coupled by their tenders to each end of the train - to bracket the cars. In places, the gradient exceeded 5%. Engine water brakes and other steep gradient railroading procedures of that era were used to ensure the movements were kept under control.

The east portal of the Stampede Tunnel is seen in this undated photo. From the semaphore, it seems that an eastbound is lined for the track at the left and its exhaust is preceding it.

From left to right, you may be seeing three train order signals, a train order rack (i.e. a platform and delivery device), and a telltale to warn brakemen on top of cars that the tunnel's restricted clearance is approaching.

The Stampede Tunnel had a few problems. The roof leaked, causing stability problems with the roadbed ... and derailments. The course of the tunnel bore rose near the centre, allowing gases to accumulate there ... and requiring all trains to operate up a gradient, regardless of direction. Given the arcing track profile in the tunnel, you can imagine slack action and trains breaking apart could have been added to the list of problems for crews trying to transit the tunnel safely.

After a suffocation fatality in 1912, a ventilation system was added to the tunnel.