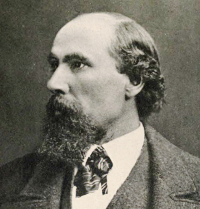 This is another segment of a 1950 public timetable from the Great Northern Railway. 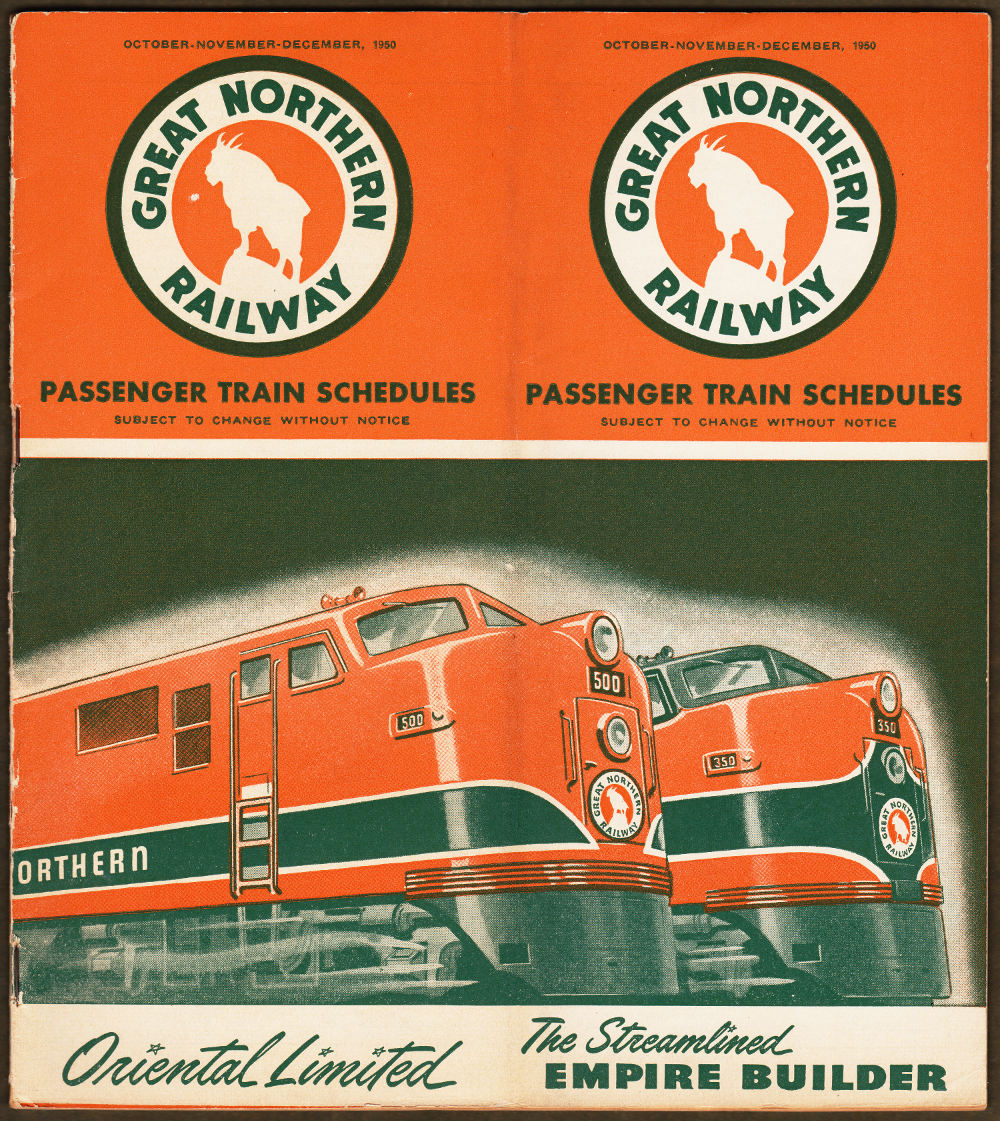 James Jerome Hill (1838-1916),
later known as 'The Empire Builder'- when that title had a positive connotation,
was born near today's Rockwood, Ontario.


JJ Hill was referred to in recent posts about Sault Ste Marie and its bridge because of his association with the St Paul, Minneapolis and Manitoba Railway. He was involved with this railway in partnership with some of the figures who would later form the CPR Syndicate.

The St Paul, Minneapolis and Manitoba would become the key transportation link for supplies used in much of the western construction of the CPR - making its principals millionaires ... if they didn't already have that status.

The StPM&M also served as the nucleus of the transportation system for which JJ Hill would be most famous - the Great Northern Railway.

As a little historical background, here are two images showing the construction of the StPM&M. Notice the simplicity of railway construction on prairie land. Above, you can see a couple of horses pulling a rail cart forward. To the right, a cart of ties is headed in the same direction. The person lying on the cart in the foreground may be at the Department of Occupational Health for a migraine, or something. Behind the camera would be the series of supply trains - bringing rails, ties, etc as close as possible to the advancing railhead.

Below, the jolly labourers (along with their US Cavalry friends) pose on their cosy bunkcars. Probably, dimensional standards for rolling stock had not yet been established across the industry ... on the prairie at this point, they could use cars which exceeded 'Plate C'.


Here is the first section of the 1950 public timetable.
This includes tables 1 to 13 ... if you choose use the station index.

Other posted pages can be found here: 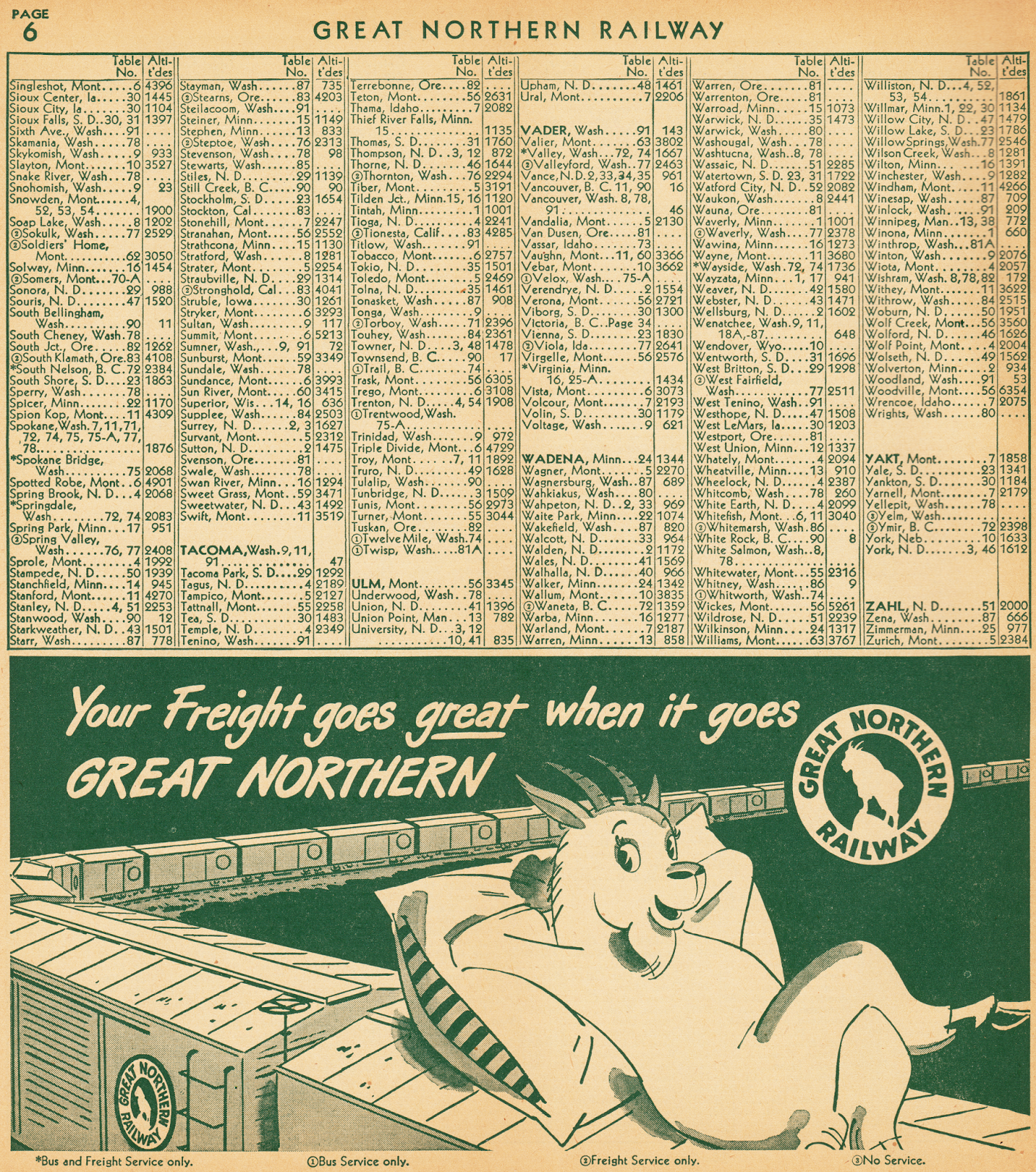 Referring to the small timetable map above, and the images below:

As the Great Northern's westward construction approached Seattle, it ran into the Cascade mountain range, through which no suitable pass could be found. A tunnel was indicated, but its construction would take several years.

JJ Hill lived to see the first Cascade Tunnel completed and electrified, and he predicted the second would eventually be built.

... Like the CPR's experience with Rogers Pass, a grade reduction made operations more efficient. More importantly ... heavy snows and avalanches on the mountain slopes were imposing severe costs on scheduled operation, equipment, finances and human life. At a key operating point named Wellington (later named Tye) an avalanche killed over 100 people in 1910.

Before the first Cascade Tunnel was completed, the GNR used a relatively rare technique to operate its main line over the Cascades ... switchbacks were in use from 1892 to 1900. The photo below was probably taken near Wellington. It shows four levels of track, with a water tank marking the highest level.

... Trains would zig-zag up or down the slope as the photo suggests. Automobiles, can negotiate hairpin turns when roads zig-zag to negotiate steep slopes. Trains can't operate on very tight curves, so at the end of each ramp of track was a switch with a dead-ended 'tail'. Once on the tail, the train would stop, the  switch would be thrown, and the train would reverse direction to travel on the next ramp.

The dead-ended switchbacks and their convoluted tracks can be seen climbing both sides of Mount Stevens on the map below. Once the line was raised to the point where an acceptable route could be plotted around the south side of Mount Stevens (and over the Cascades) you can see that line joining the two sets of switchbacks. The line is labelled "Original Mainline, Constructed 1892".

A great amount of power was needed to push tonnage up these slopes and, in the photo below, you can see the safety valves have opened on at least two of the locomotives. These experienced crews preferred to have hot fires and excess potential energy in each boiler ... rather than stalling the ascending train for want of power from one of the engines.

In the event of a stall, the train would likely return to the previous switch and its 'tail' track, and wait there for steam pressure to build in all engines before making another try.

Generally, the locomotives would be coordinated by the engineer in the engine leading the movement (seeing that the switch and the track ahead were ready). The leading engine's 'command' to proceed would be given by his whistle, and the train would move only when answering whistles were received from the other engines - to indicate they were ready.

A train working against the force of gravity up a slope puts on a dramatic show.

A train travelling down a slope, which risks becoming a hopelessly accelerating runaway on a virtually frictionless set of rails is arguably more dramatic when one considers the probable fatal consequences for some riding on it.

... Air brakes were still a new technology in the 1890s, and the Great Northern movements were often operating on something around a 4 percent grade between switches. So crews were specially trained in the safety rules and procedures necessary ... similar to the CPR's Big Hill operation discussed elsewhere on this blog.

Again, the leading engine would probably control the brakes, but engineers and trainmen would generally be prepared to apply brakes to stop the movement - based either on the lead's whistle signal ... or if they felt it was appropriate for safety. How the Great Northern compared to Canadian railways in the mountains.

To compare the Great Northern's operation to Canadian railways in the western mountains, you can reflect on the three profiles shown above. Dashed lines represent secondary routes constructed by the railways.

The Canadian National profile reflects the route created by the CNR when it rationalized the two lines of the Canadian Northern and the Grand Trunk Pacific.