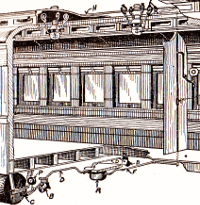 Pintsch gas is a topic I have wanted to explore for about three decades.

I'd have a much better chance of finding a blacksmith making horseshoes by hand today, than anyone using Pintsch gas in railway service - this is a long-gone technology.

In some cases, future readers will find this page by accident or through a Google search. As I age, I need to be aware that younger and future readers (circa 2040) will have no experience with the artifacts and technologies I write about here.

I have never lived in a house where there wasn't at least one kerosene-burning light, designed for railway service, which could be put into operation with the addition of some fuel. 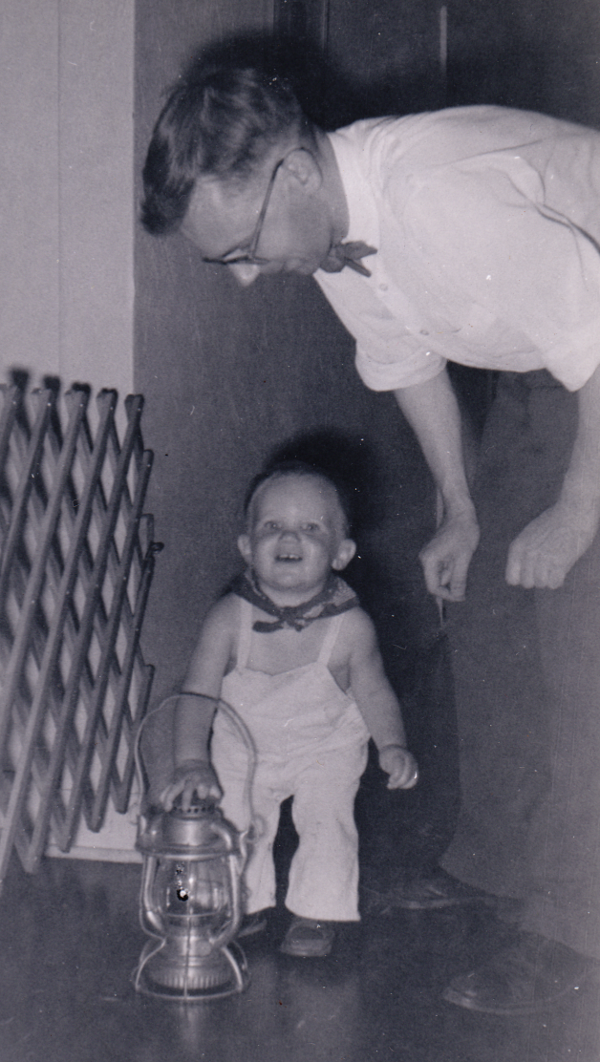 
I remember a photo being taken of me in this Lachine apartment as I suddenly reached down to touch the top of a lighted lantern. I have found no other photos like this, so this may be the event I recall. Perhaps the lesson of the minor burn was salient enough to cause me to remember the event from this very young age. As an additional memory aid, there was also a lot of shouting and alarm just after the flash bulb went off. No doubt some of that came from me.

In the late 1950s, my father bought his kerosene from the bulk barrel at the hardware store across the street. There, the kero was dispensed into a glass 'la Parisienne' bottle which had been manufactured to hold that brand of bleach. The kerosene was darker, and more oily and pungent when burned, than today's highly-refined diesel-like product which is sold mainly for use in space heaters.

Initially, during the research for this post, I guessed that kerosene for passenger car illumination was replaced by Pintsch gas because the kero lanterns and their fuel reservoirs (fonts) were a fire hazard if they were damaged in a wreck.

The Slow March of Technological Change 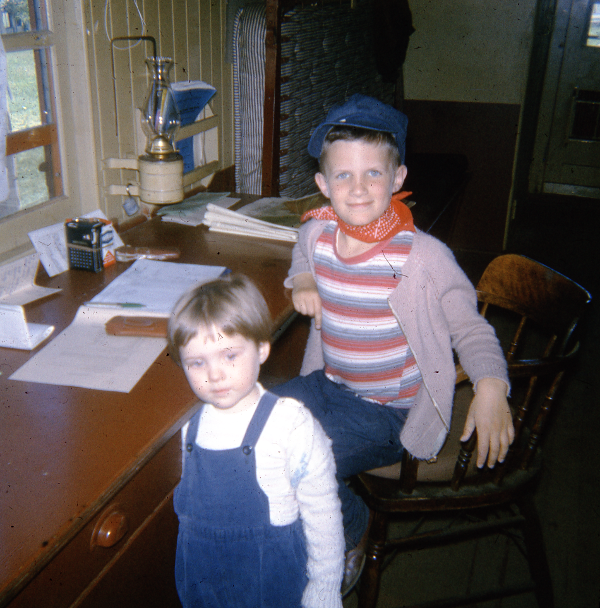 
The wooden caboose above was used on our fantrip, and is seen here at Laprairie, Quebec. It still had kerosene interior illumination.

Notice the wall-mounted arm to prevent the glass chimney from accidentally being knocked off the lamp by a worker, or thrown and broken due to slack action or in a collision. However, the chimney can still be raised so the wick can be lit or the flame adjusted.

The font assembly was permanently attached to the wall. To service or replace the wick, or to refill the font ... the glass chimney was lifted, tilted to the side and removed. Then the wick/burner assembly was unscrewed from the font - leaving a 'hole' into which the kerosene was poured.

Notice that a 'lantern battery' is used to power an AM radio. 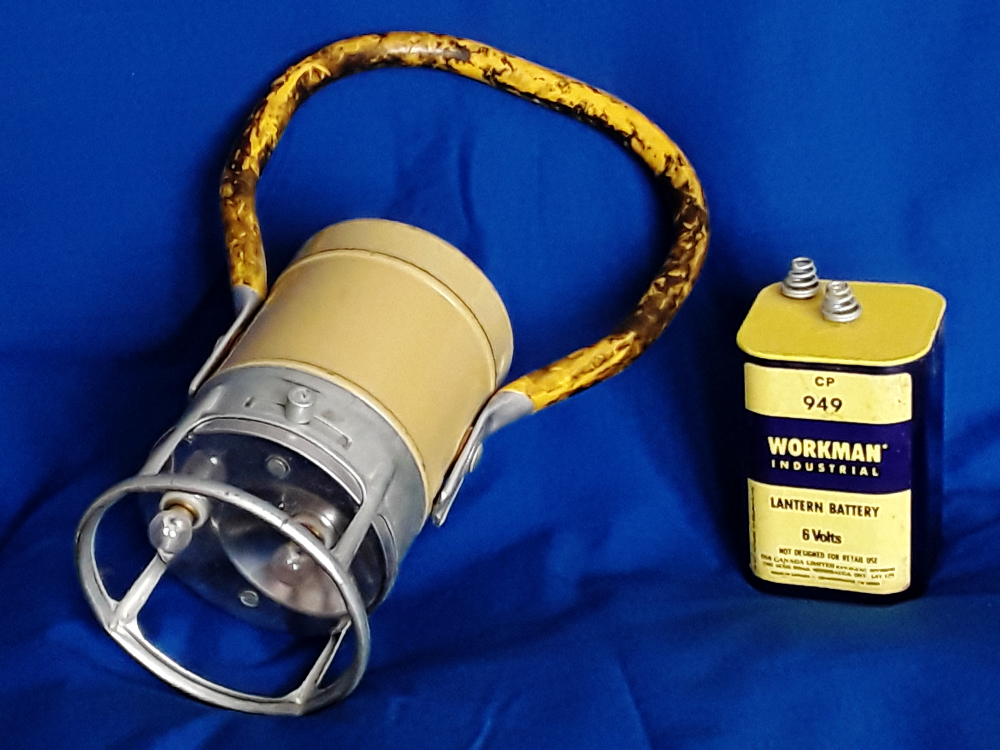 Above is the type of technology in use when I worked in 1977. The cost of the lantern was deducted from our pay - about $5, or $19 in 2017 dollars. The handle is yellow, but coated with diesel exhaust grime - which was usually found on most locomotive grab irons and handrails.

In 1977, inside the kerosene-markered wooden caboose used in transfer service between Terrace Bay and Schreiber, our 'modern' Adlakes did little to brighten the interior blackness more than a regular kerosene lantern would have.

Getting Back to Pintsch Replacing Kerosene

Passengers probably didn't enjoy the burning kerosene odor in their cars, and there were probably reasons why a Pintsch gas system was safer - as you'll see. There was also probably less labour required to maintain the individual burners in each lamp - as kerosene wicks would need to be trimmed and replaced on a regular basis, and fonts would require refilling.

However, above all, gas lighting was probably installed on passenger cars between circa 1880 and 1910 because it provided a brighter light than kerosene.


'Steatite' in the article is soapstone.

How does Pintsch gas compare with today's petroleum products?

Pintsch gas was a naptha gas - something like Coleman fuel. This diagram and table from a 1950s book on petroleum shows you a couple of types of crude oil and how naptha compares and contrasts with its fellow petroleum fractions.

In commenting on the beginning of the petroleum industry in Canada - at Petrolia, Ontario - the author notes that there was very little market for the lighter fractions of petroleum. Everyone wanted kerosene. Gasoline and its lightweight relatives were often dumped as waste into waterways - sometimes with destructive outcomes when the waterway came in contact with a spark or fire.

How I Learned About Pintsch Gas


I attended a Toronto railway show a couple of times in the late 1980s. The first time, Adolf Hungry Wolf was there with his son Okan. From Adolf, I purchased a cardboard box full of The Science of Railways, a circa 1900 general reference regarding all aspects of railway technology and operations. This was quite a treasure for me to acquire and my interest in Pintsch began then. A number of these volumes can be found found today at archive.org.

Eventually, I purchased half a dozen of Hungry Wolf's self-published books on Canadian railroading. A number offered historic views of CPR operations in the Algoma region which I had never seen before. He also produced videos of Canadian railroading in the 1980s. These included bonus footage of his family's caboose camp; we were introduced to all the members of his family. I'd have my father and brother over to view these tapes on 'railway nights'.


Adolf was there alone at a subsequent Toronto show when I purchased a CPR treasure from him. Years later, further family interest was generated when my spouse and I proudly reported that our Prairie Dog Central excursion, on a beautiful summer day, was being followed and photographed by none other than AHW!

While we had seen other noted Canadian railway authors and historians at a distance, we were most familiar with the Hungry Wolf Family. I really wanted to mention Adolf and Okan before continuing on with my principal reference on Pintsch. 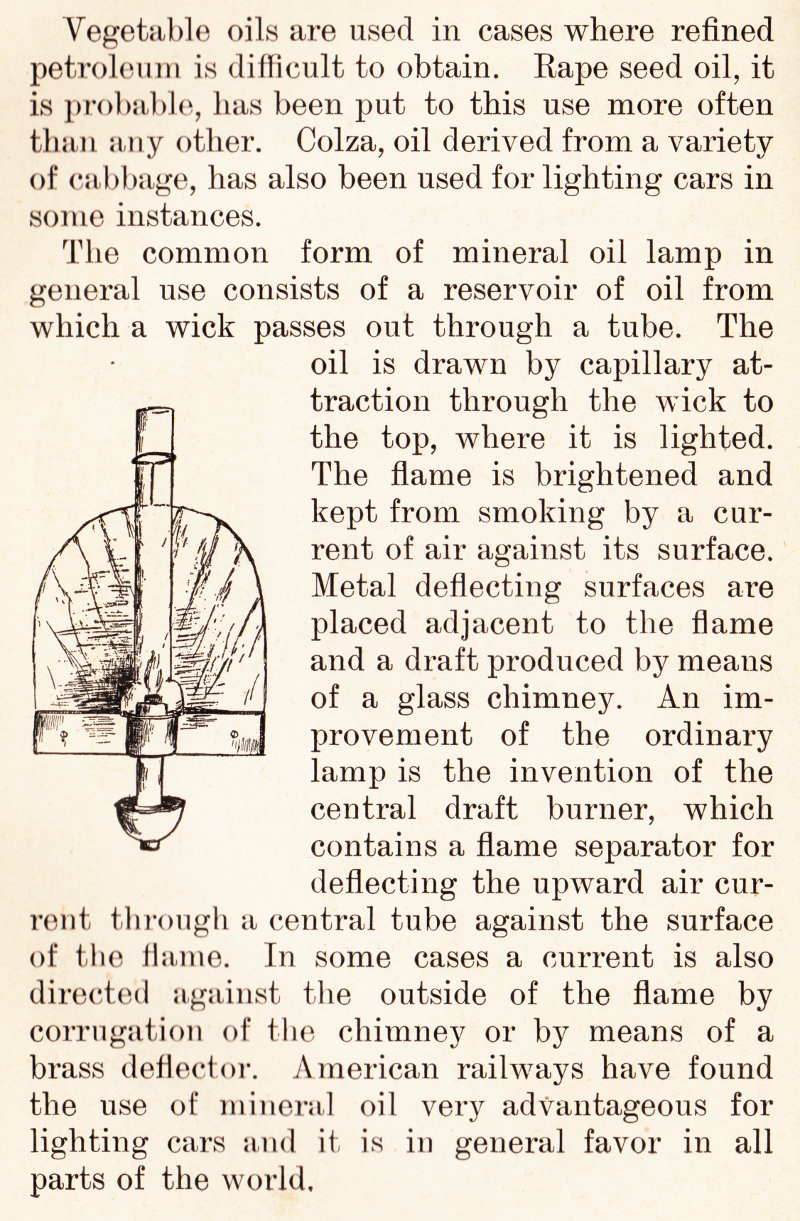 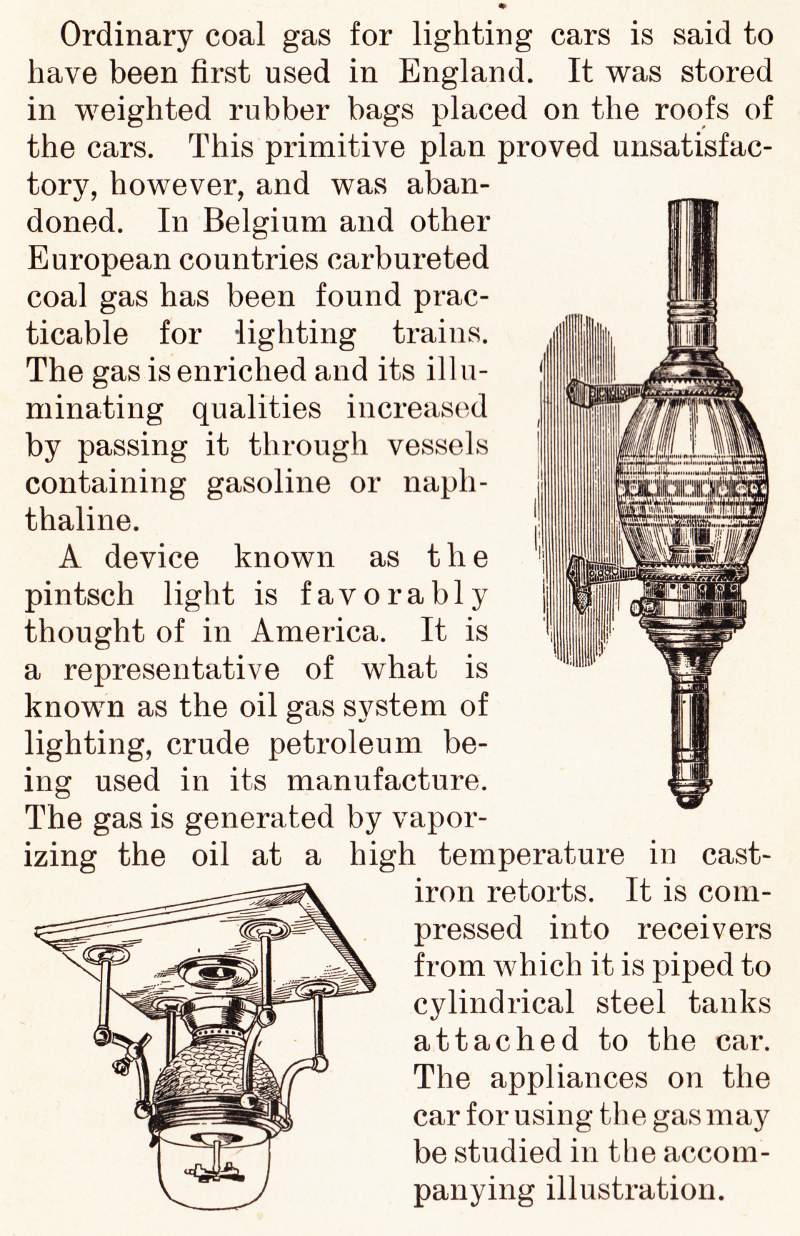 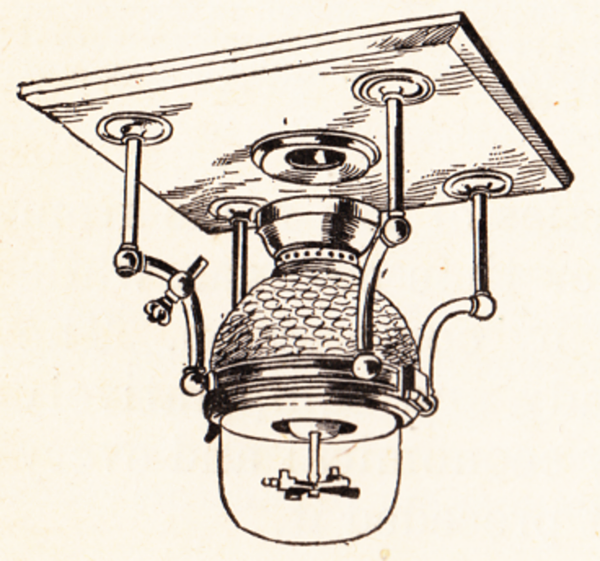 Sometimes it is quite difficult to find a decent diagram or photo of a system which has been obsolete for a century.

Looking at the ceiling attachment coming down at the extreme left ... you can see the gas valve on the curved connection to the fixture.

The four or five burners can be seen encased in a glass globe - unlike other gas-burning systems there is no fabric 'mantel' on the burners.

The combustion gas exits the top of the fixture and exhausts through the metal chimney above. 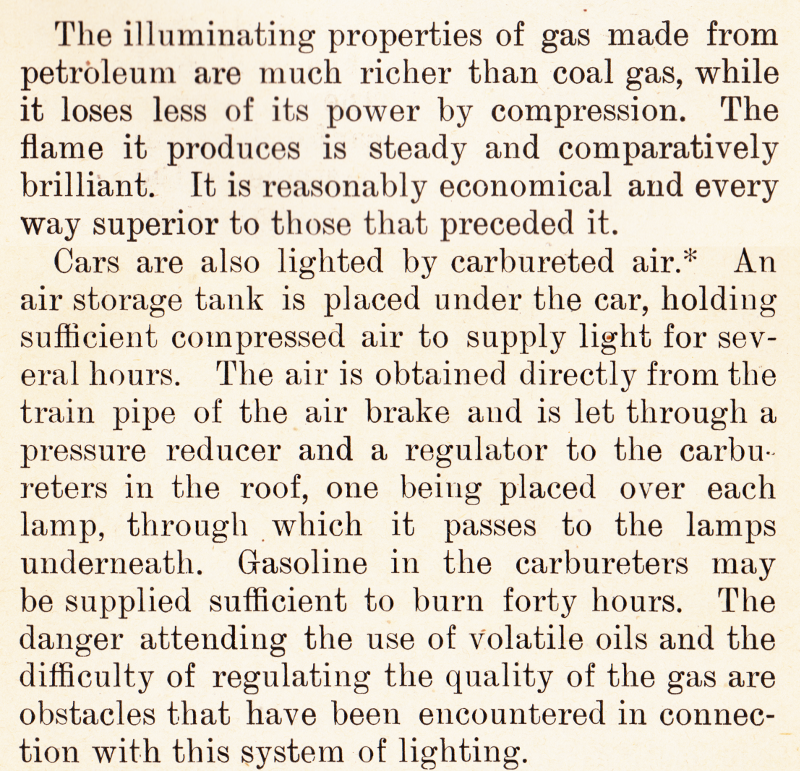 As you see, 'carbureted air' was yet another system ... and it was different from Pintsch.

The diagram below shows all the parts and describes the system's operation. 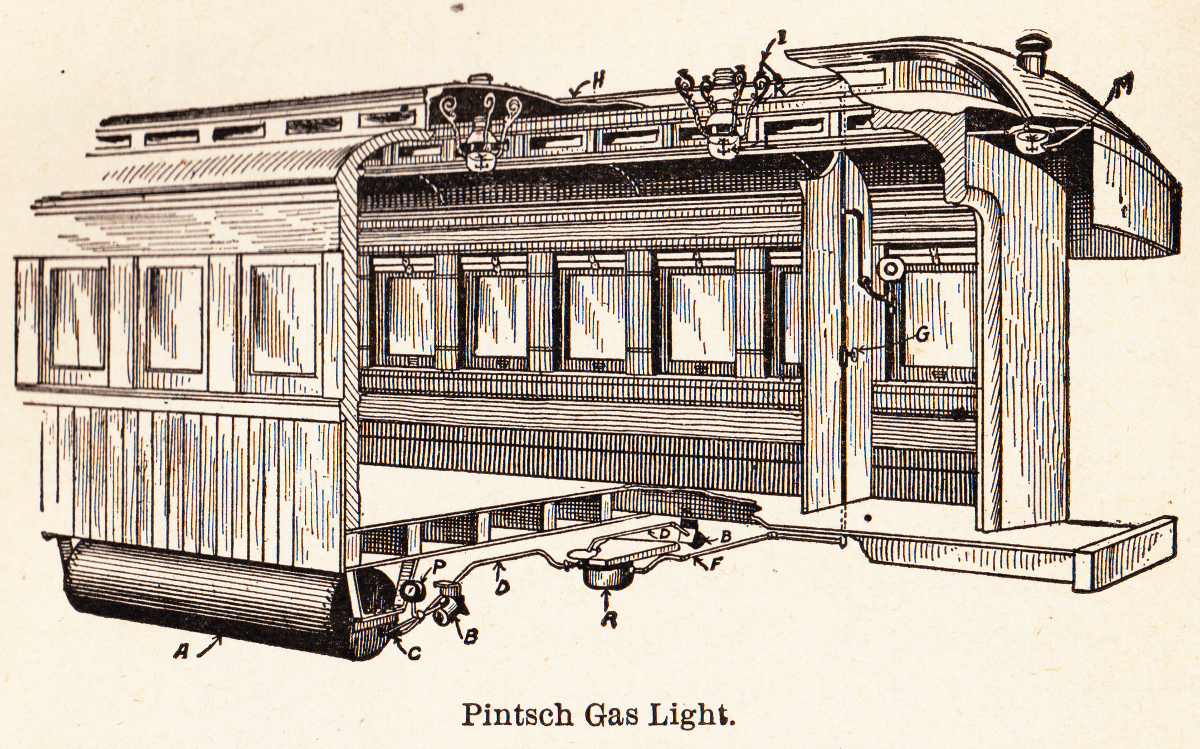 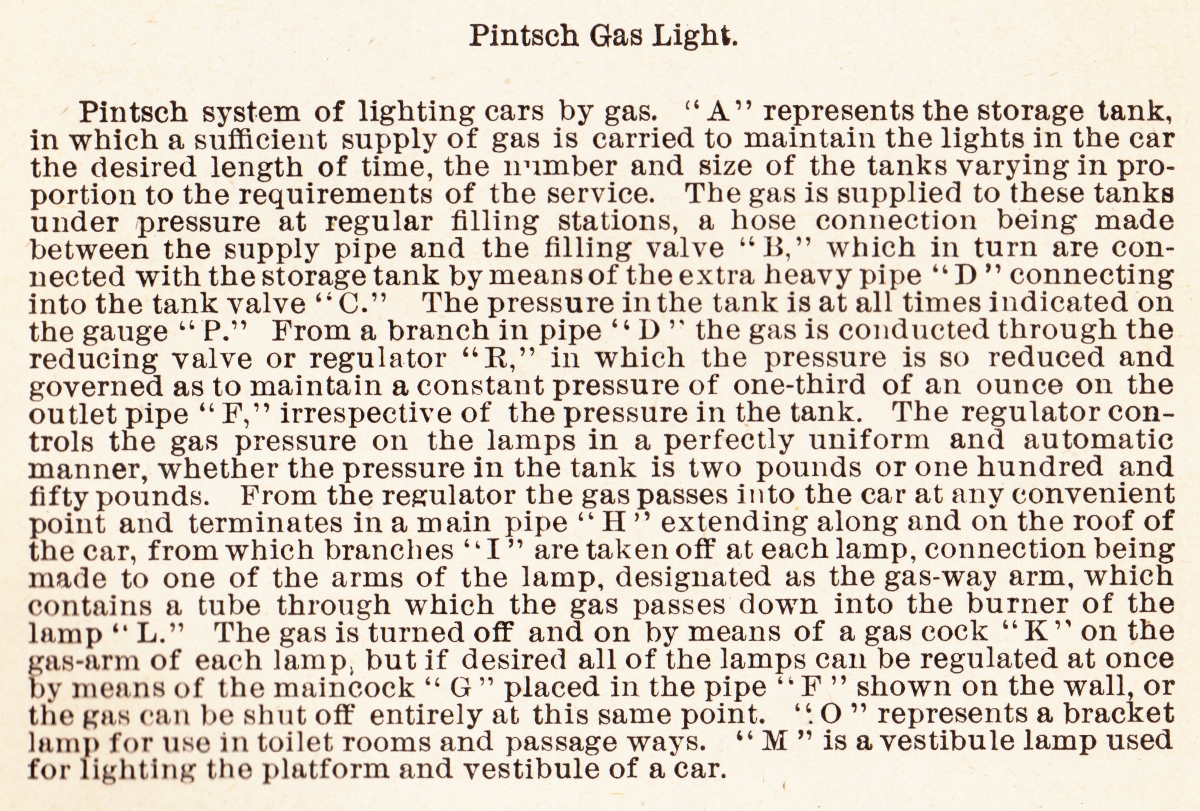 I enlarged and reprinted the diagram below, in case that is helpful. 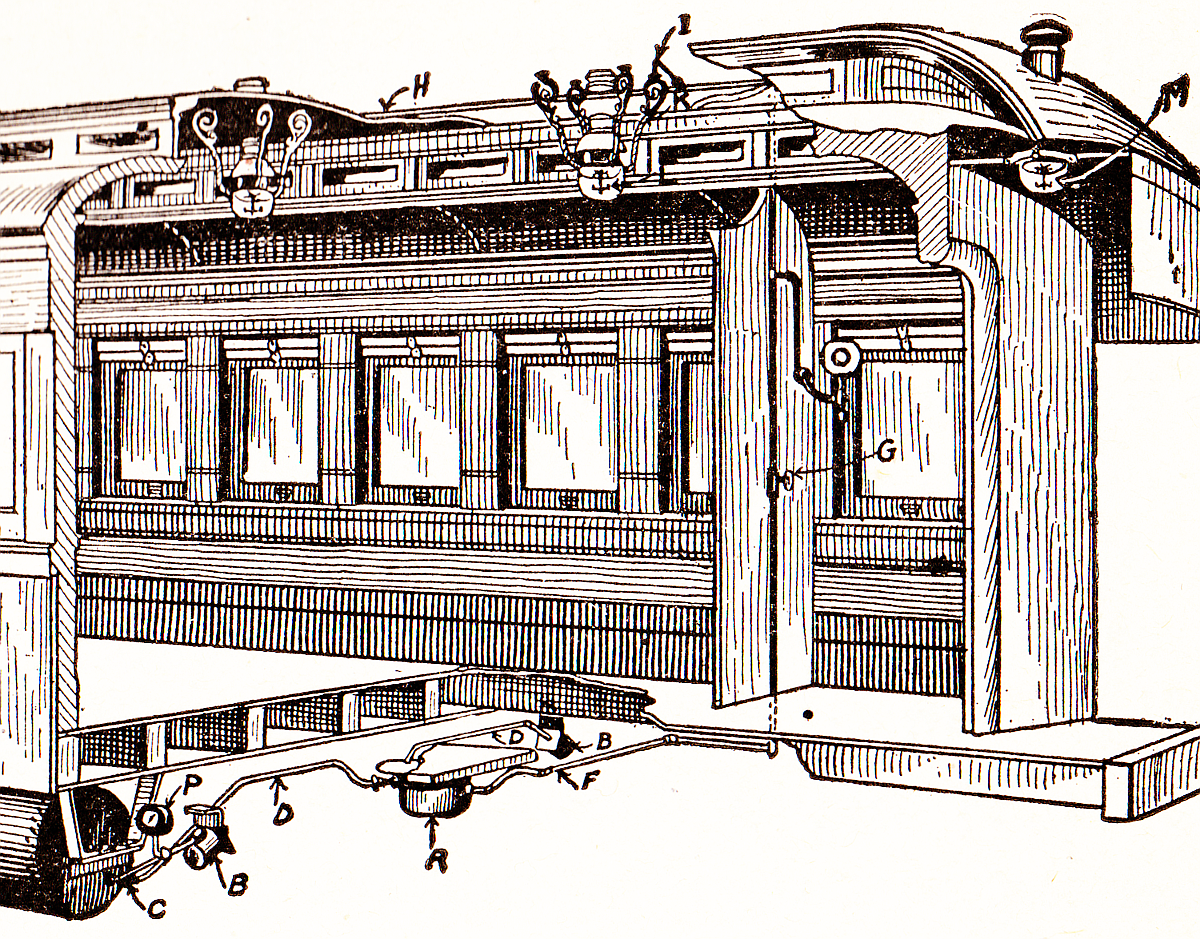 My father generally referred to kerosene as 'coal oil'. In fact, the latter was a less pure lantern fuel, distilled from coal shale, tar, or similar materials. Actual coal oil was in use around the 1860s. It was cheaper than whale oil ... and less dangerous than camphine - a distillate of turpentine (from pine trees) which was used in the 1850s.

Kerosene could be distilled from a range of fossil fuel sources, and particularly from liquid crude oil. As oil refining techniques became more efficient and standardized, this purer version of 'coal oil' displaced other lantern fuels and led to the development of modern kerosene lanterns.

In the car shown above, the font and burner assembly (etc) of each kerosene fixture might drop out of the permanently-mounted metal framework ... for cleaning, servicing and refilling. Notice how close the swivelling wall lamp is to the reading chair - this probably illustrates the relative dimness of the kerosene flame. While the ceiling lamps exhaust through the roof of the car, the combustion gas from the reading lamp remains in the car.

In the caption, it is suggested that common kerosene was just a commodity, while some pricing pressure could be exerted on those purchasing the more specialized Pintsch gas.

Unfortunately, this image is printed over the book gutter, but the focus of the illustration for me is the relative safety of Pintsch gas.

The man is pointing to the left-side windows of a coach, with the aisle behind him and sunshine entering above from the right-side coach windows onto the right-side seats.

The Pintsch fixtures (one is enlarged below) are intact and have robust glass globes protecting the burners. Unlike the fixture diagram above, these fixtures vent directly - without the exhaust 'jumping the gap' from the fixture top to the ceiling.

Had the accident happened in daytime, the individual fixture valves and the main car valve would have been in the closed position. After the gas leaves the under-car storage tank and regulator (see the diagram above) it travels through the main pipe - along the top of the roof. Because of this design, minimal gas was present within the passenger compartment.

If lit kerosene lamps where shaken up during a night-time derailment, the flame and the full fuel reserve in the font would be in close proximity to each other.

The gas regulator ensured the gas was at a uniform low pressure through the system's piping within the car. In the event of a wreck, most of the passengers would not be near any high-pressure gas and a breach of the low-pressure gas piping would probably starve and extinguish the burner flames.

... However, just as a matter of policy, one would not want to be sitting over the main gas reservoir or its pipe to the regulator in the event these were breached by a rail or other debris! 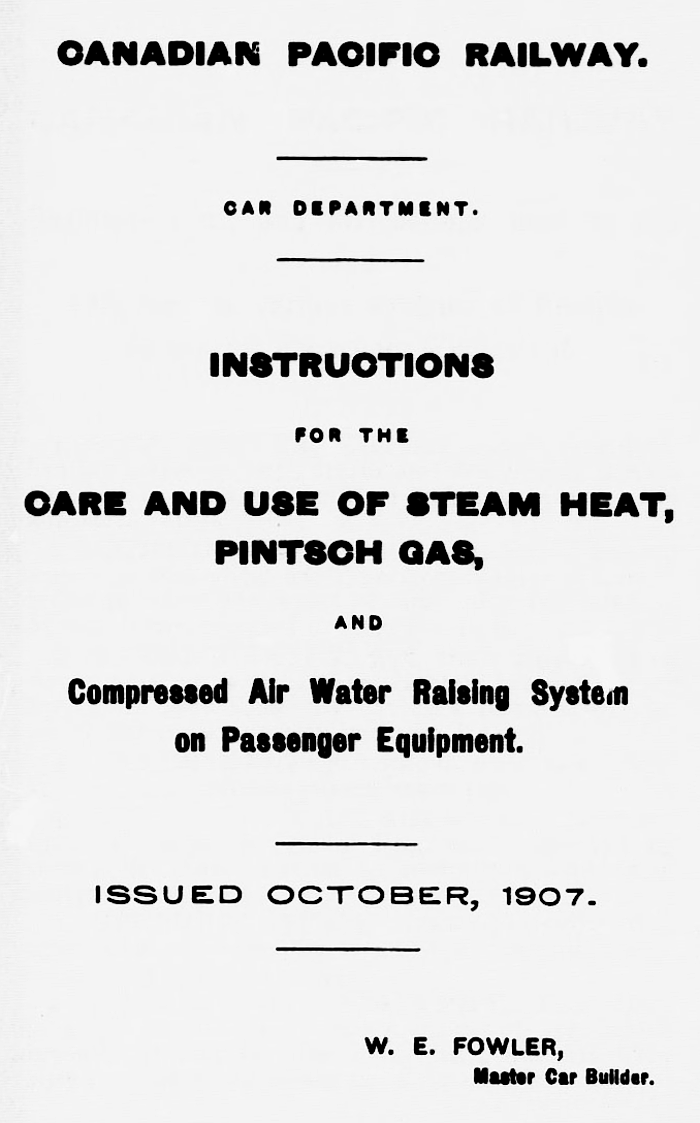 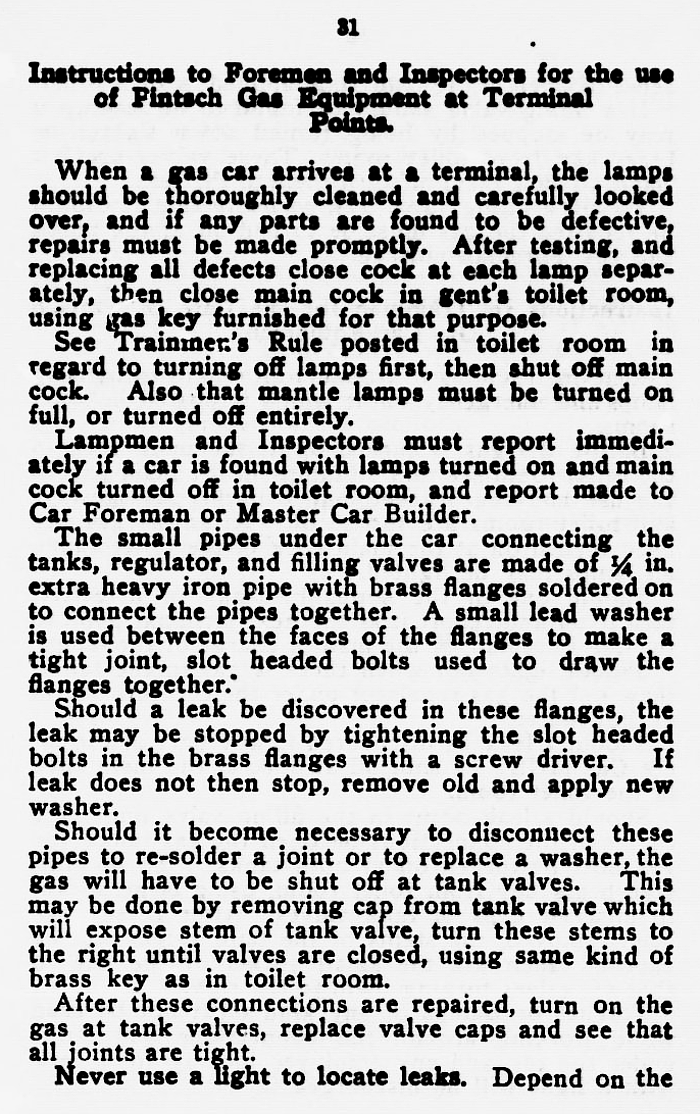 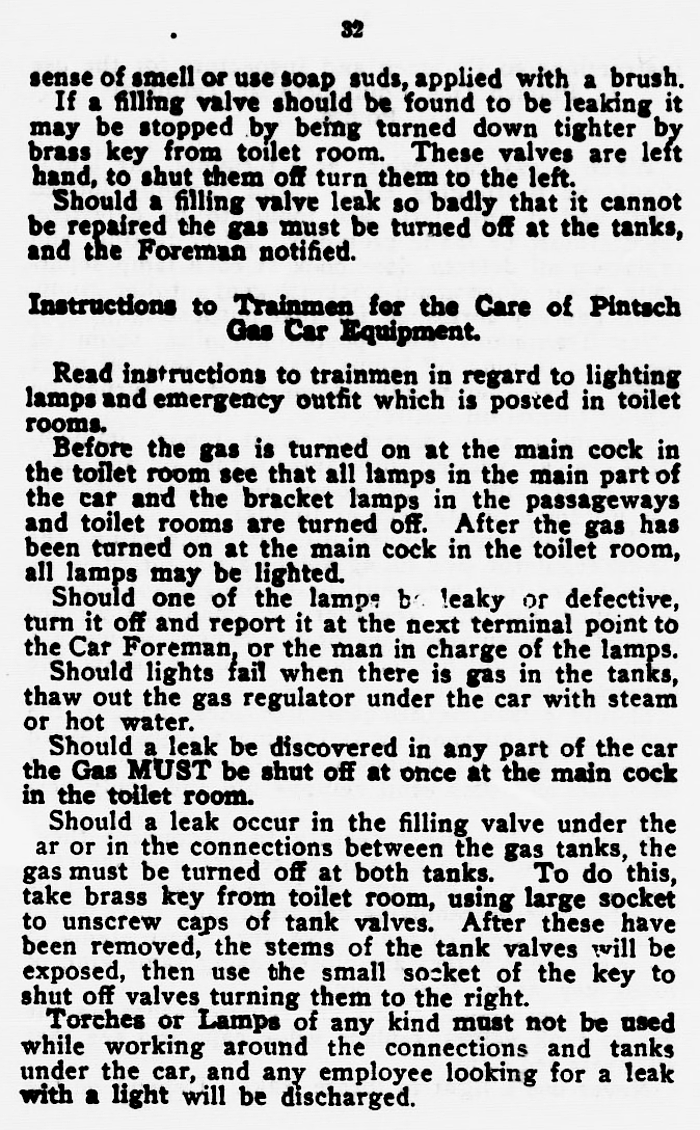 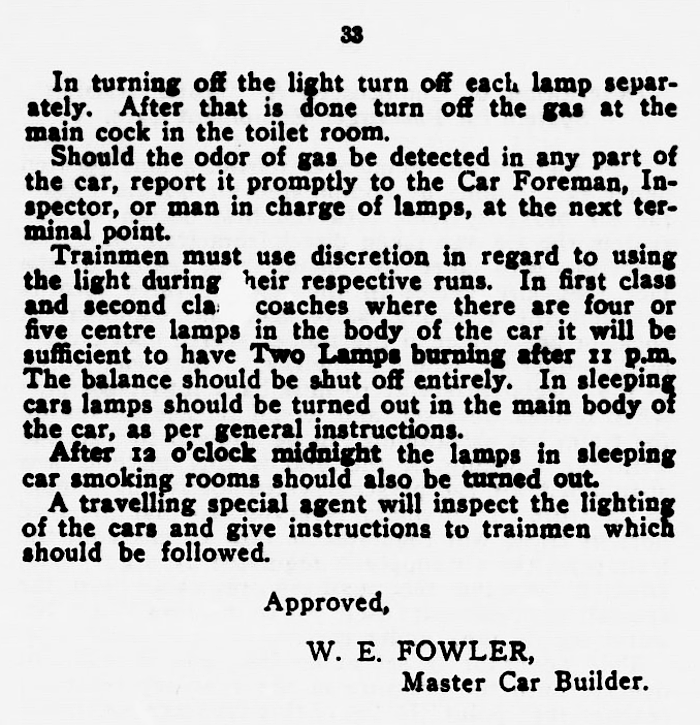 On the car above, you can see the rooftop main pipe which supplied the low pressure (post-regulator) gas to the various fixtures. Today, the same pipe locating technique is used when commercial buildings use natural gas - you will often notice yellow pipes running across their flat roofs,

There are some loose car parts on the other side of the car - disregard them. The main gas reservoir is likely the largest assembly at the left, which curves in from the side of the car.


The large gas reservoir on the car above has a more classic look. You can barely see a rooftop pipe over the vestibule at the left. There may be a small tube extending from the pipe to feed a vestibule light. Or it is possible that it is not a tube, but an electrical wire.

In the photo book containing this photo, my father recorded both his reason for collecting this photo and an observation at the same time: 'Like Montreal commuter coaches' . Very late in their service lives, these wooden cars with Pintsch gas lights were used out of Montreal for commuter service.

In researching this piece I found a Canadian Rail article which generally discussed Montreal commuter cars and my father had appended a correction or update regarding the cars with gas lighting from a later edition of the magazine. Not only did these cars have their original gas lights, the commuter trainsets also had supplementary electric lights, powered by a dynamo located on the steam locomotive pulling them in commuter service.

My father said that wooden cars with gas lights were also used on the line to Mont Laurier in the 1950s. My grandfather had a chalet at Lac Saguay after 1949 and my father talked about the train crews lighting the fixtures on some of his trips up to visit.

During World War Two, When Every Car Was Needed. 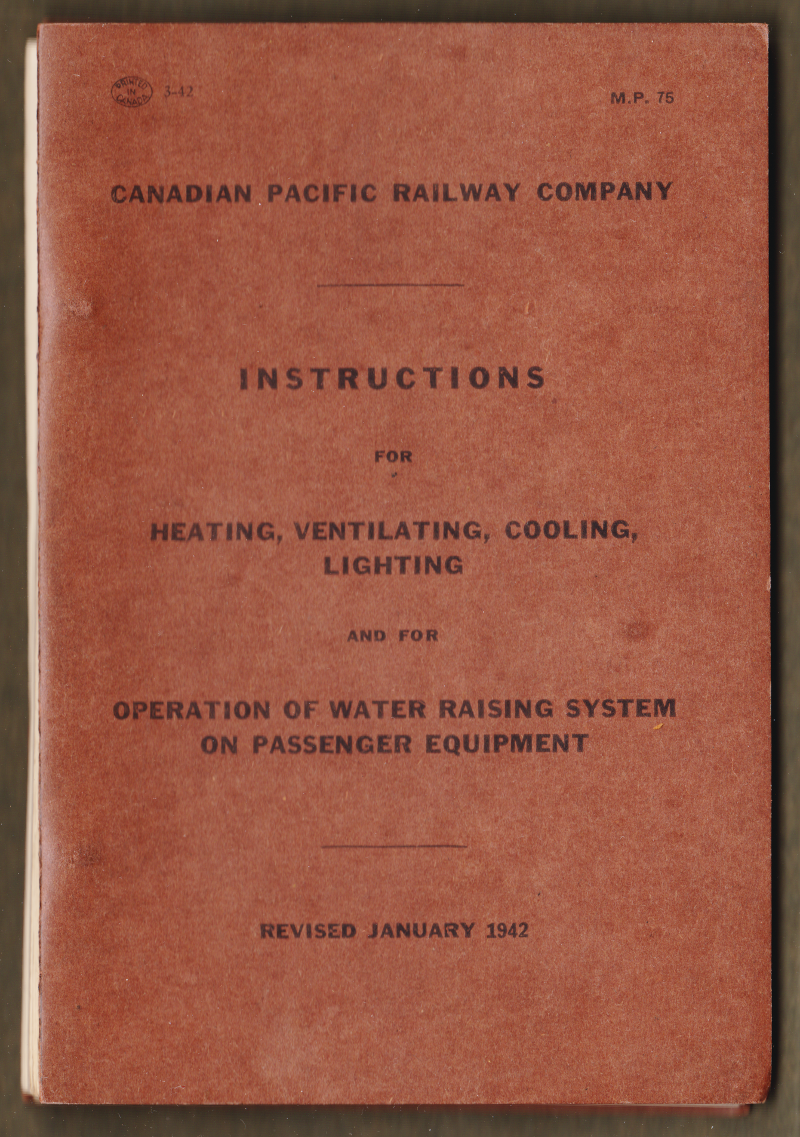 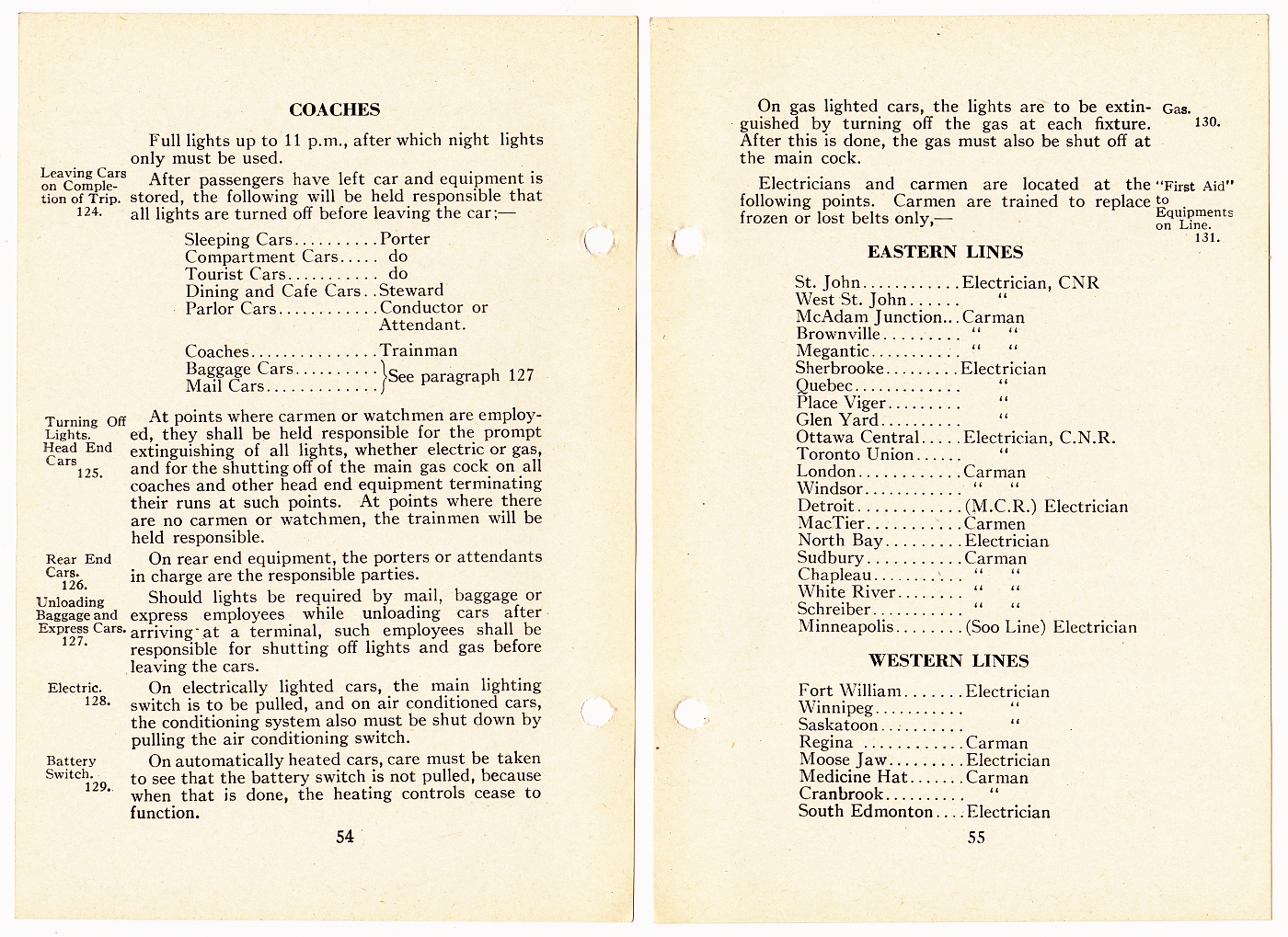 At the End of the Pintsch Gas Era 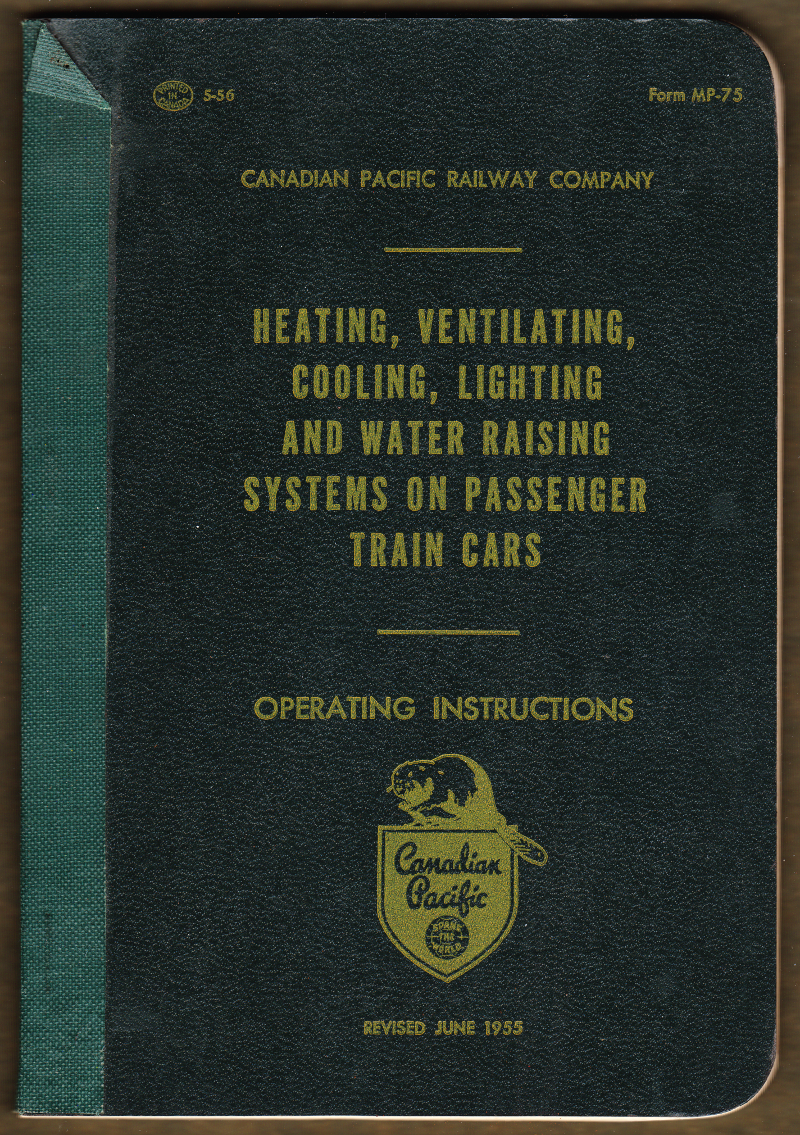 Like many other well-engineered railway technologies, which were heavily regulated for the public's safety and used by Canada's financially-conservative railways ... some specimens of the Pintsch gas system of interior coach illumination survived much longer than one might have expected.

While Pintsch gas technology was only installed in new passenger cars for two or three decades - some of these systems continued in limited service for half a century.