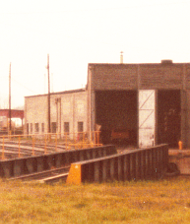 During a late 1980s trip to southwestern Ontario we discovered these CPR London facilities by accident. They seemed more interesting and accessible than the sprawling CNR yard nearby. The Quebec Street overpass provided an ideal view of the administrative and shop end of the yard.

I have included recent images of the CPR infrastructure we saw because the locations are recognizable 30 years later.

The Google map image above is from July 2016. 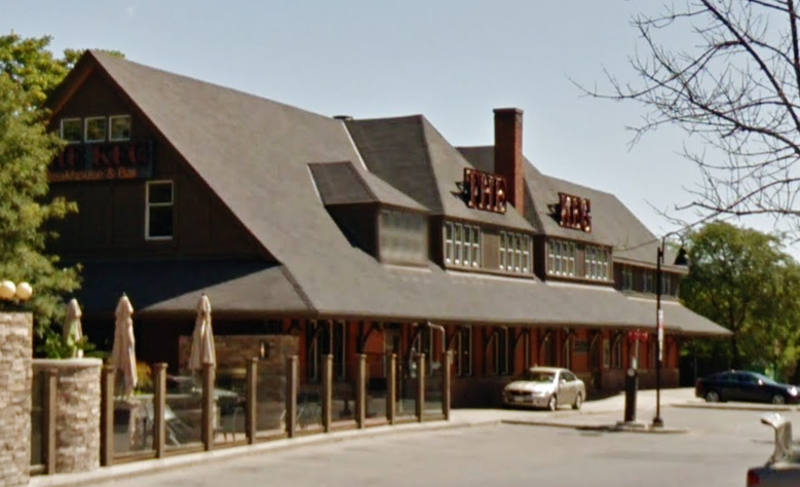 The former CPR passenger station in 2016 is repurposed as a 'The Keg' restaurant.


However, the thing you will never see again is ... a blue sky. It had been raining quite a lot and, as you can see from the photos, it wanted to rain again as soon as possible. So dark, overcast skies will follow us to the end of this post. 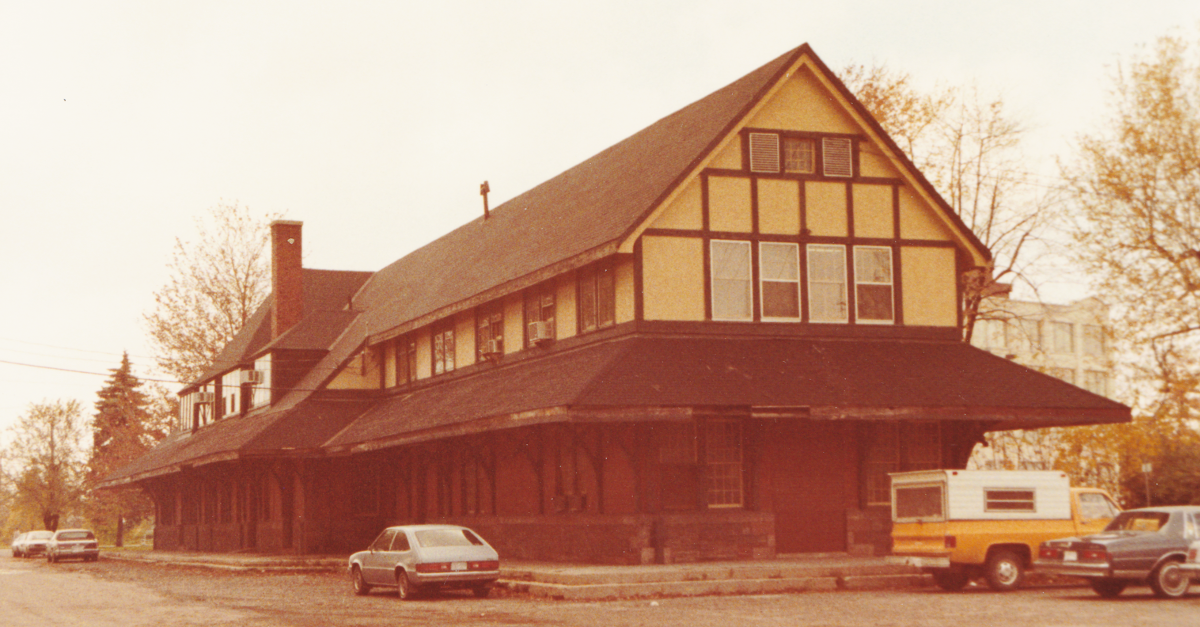 Here is the CPR station at Richmond Street, London in the late 1980s.

Farther below are employee timetable pages for the CPR line from 1968.
At that point, this was the headquarters for the 661 miles of the London Division
with 14 train dispatchers, including the Chief, based here (I assume).

As an architectural feature, the van-style smokestack adds a nice touch.

In a Google 2017 aerial view, the former station is at the extreme left in my lightened rectangle.
The Quebec Street overpass is at the right edge of the map.
You can still see the ONE roundhouse stall.
Note: This image above is not lined up exactly compass west to east.

Here is the first dark, grainy view of the yard.
No doubt, you have quickly spotted the distinctive sloped roof of the roundhouse.

The camera pans a little to the right for a general view of the yard.

One stall still existed in 2017 - used as a garage or workshop, it seems. 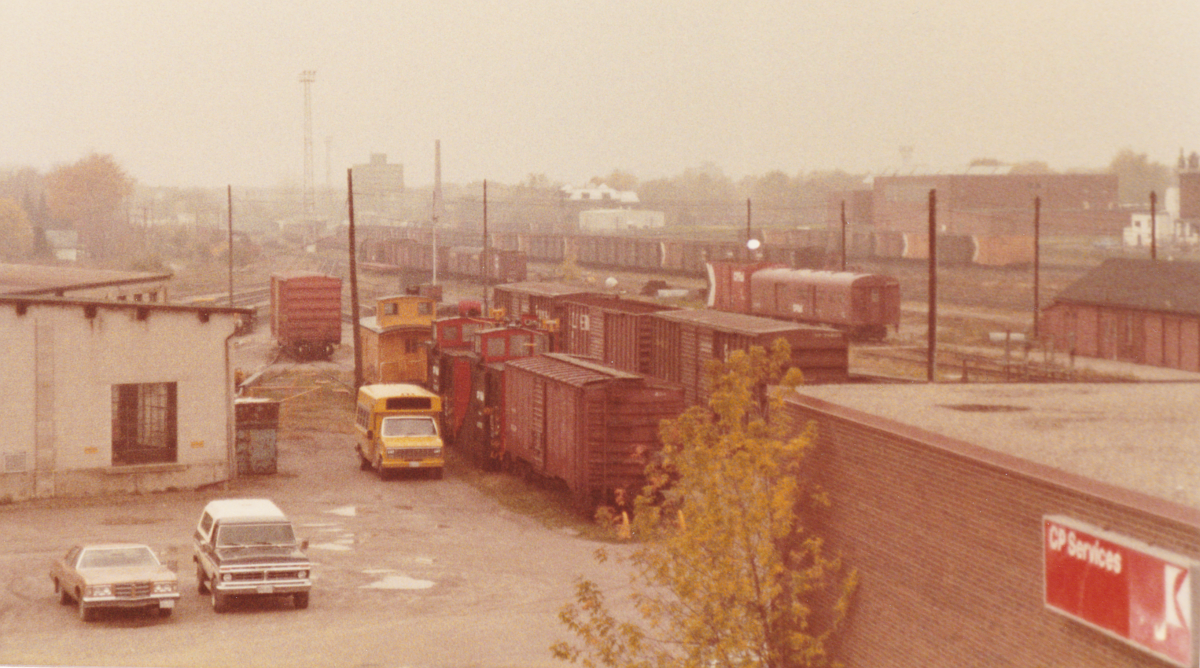 
If you are very motivated, you can follow the railway lines in the Hamilton - London region circa 1981
... they are grey and often labelled for the railway.
(eg. See:   CN ... London north to St Mary's)

CNR Bayview is located to the west of the blue Hamilton Hr (Harbour) label.
You can scroll right to see the right edge of the map.
Photos taken at Bayview are at the bottom of this post. For the following page, the 'Galt Subdivision' block of page 16 was stranded on the wrong side of the staples,
so I cut and pasted it to the page 17 timetable block.


As I have read  ... when extra trains (especially westbounds in this example) operated under timetable and train order rules (in contrast to CTC), the full slate of eastbound freights provided a known schedule of traffic ... which the westbound extras could use to 'help themselves' get over the line.

It was also written, I think, that you would want to schedule all the freights in one direction only. This is because - given ideal operating conditions - the eastbound freights would get over the line via the timetable clockwork - that is, with all the meets defined in the timetable. If there happened to be a problem with the 'timetable clockwork' meets because of snowstorm-caused delays (for example), the dispatcher might need to issue train orders ... to order more efficient meets among the scheduled trains. For example, the railway wouldn't want a passenger train sitting on the main track for two hours, waiting for its usual opposing freight to clear the siding switch in front of its nose.

In contrast, generally, all the opposing westbound EXTRA freights (they may well be daily trains, but they're not in the timetable) ALWAYS had to take care of themselves. Generally, they had to calculate all of their own meets, while avoiding the scheduled trains in both directions ... in compliance with ALL the rules ... and considering any train orders changing scheduled meets for that snowstorm. ( ..."Generally"... Of course the operating rules gave dispatchers great flexibility in setting up meets, etc, for any train ... including extra trains.)

As you might expect, too many train orders created too many inefficiencies and too much potential for a misunderstood order, a forgotten order, or a miscalculation ... which might result in a collision. Over decades of rulebook language revisions, and operating experience, it was determined that this particular method of mainly scheduled freights versus mainly extra freights was often the most efficient system to use.

As a rule of thumb (Rolly Martin told me) installing Centralized Traffic Control (dispatcher-controlled, interlocked, 'traffic lights' and switches) was as good as installing double track ... in the sense that CTC dramatically improved a single line's capacity to move traffic. 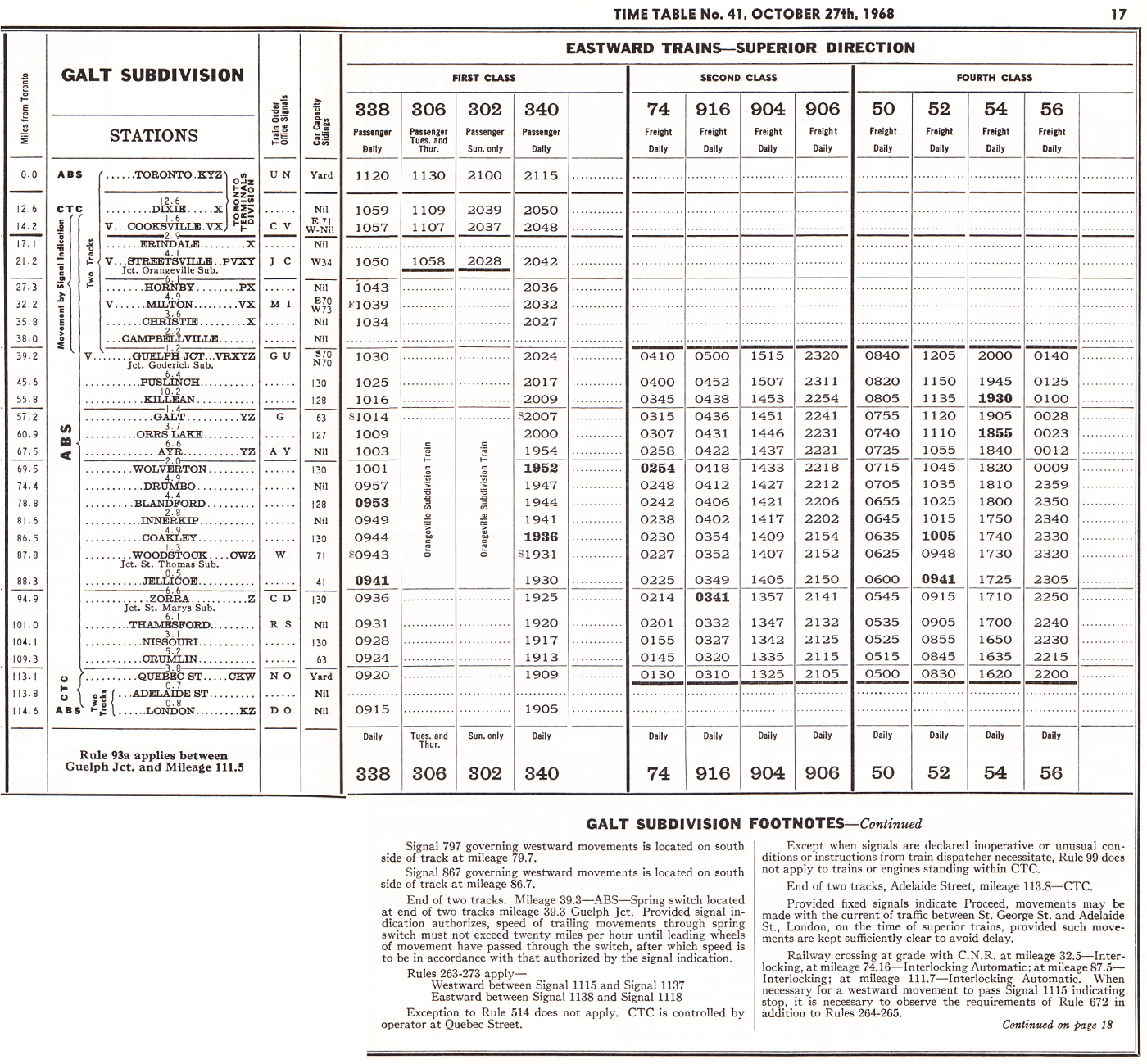 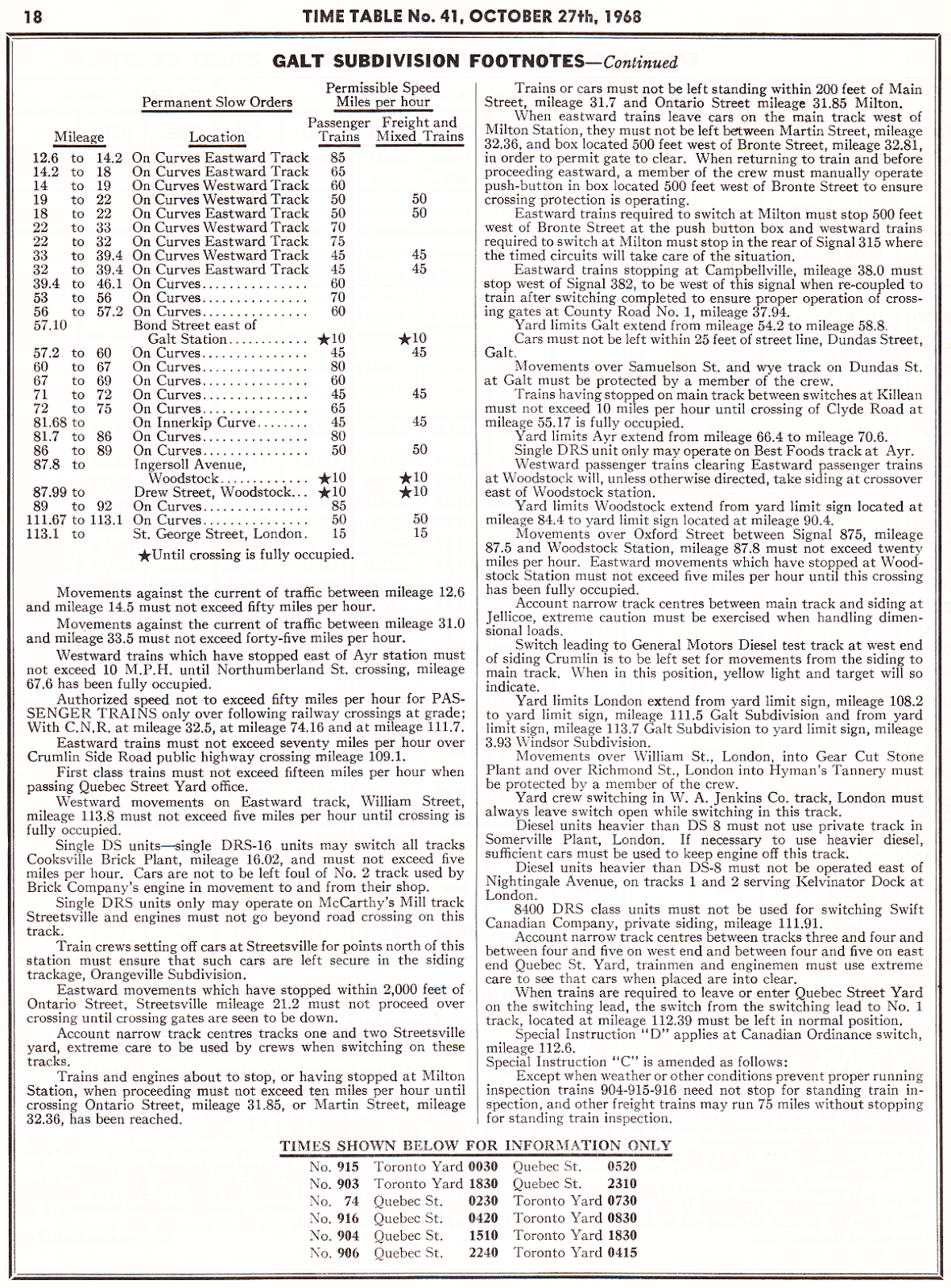 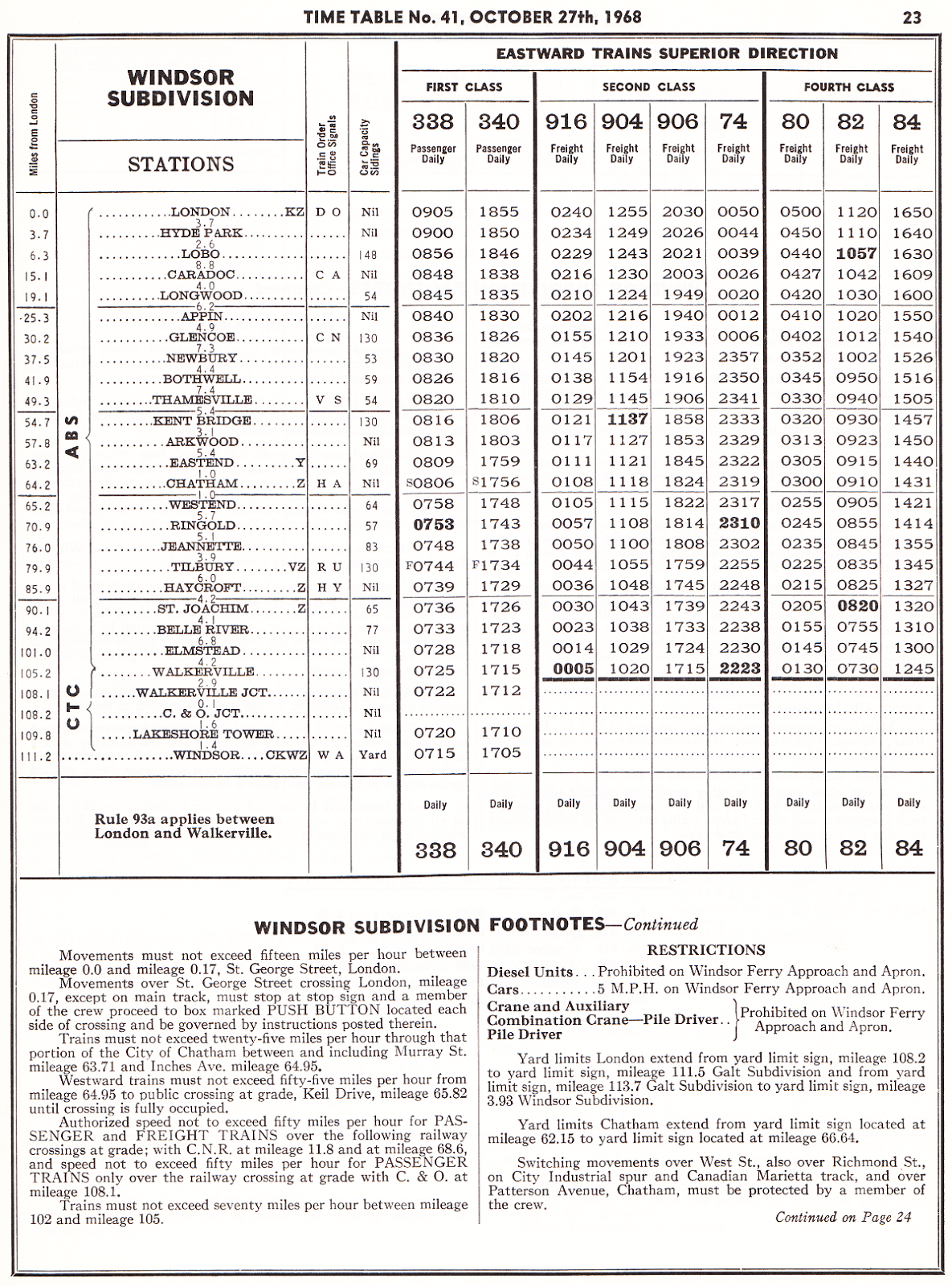 A few trains at Bayview. 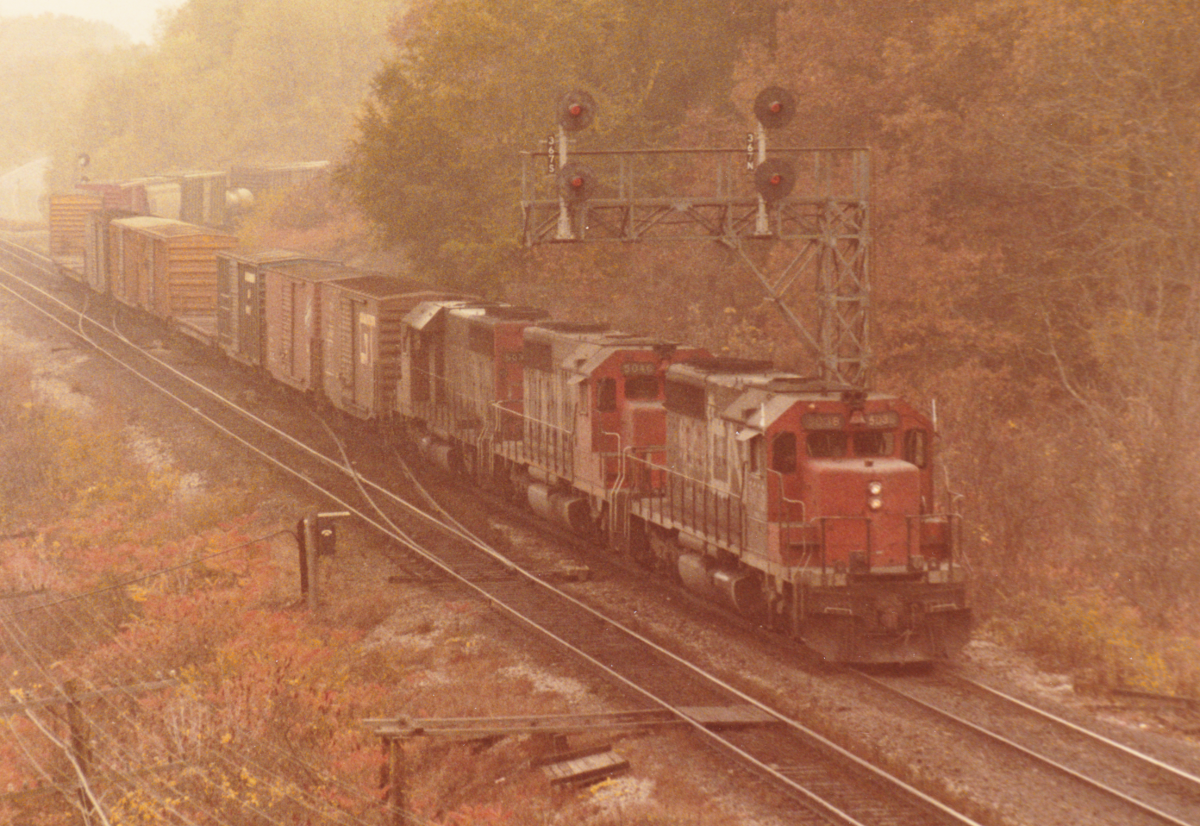 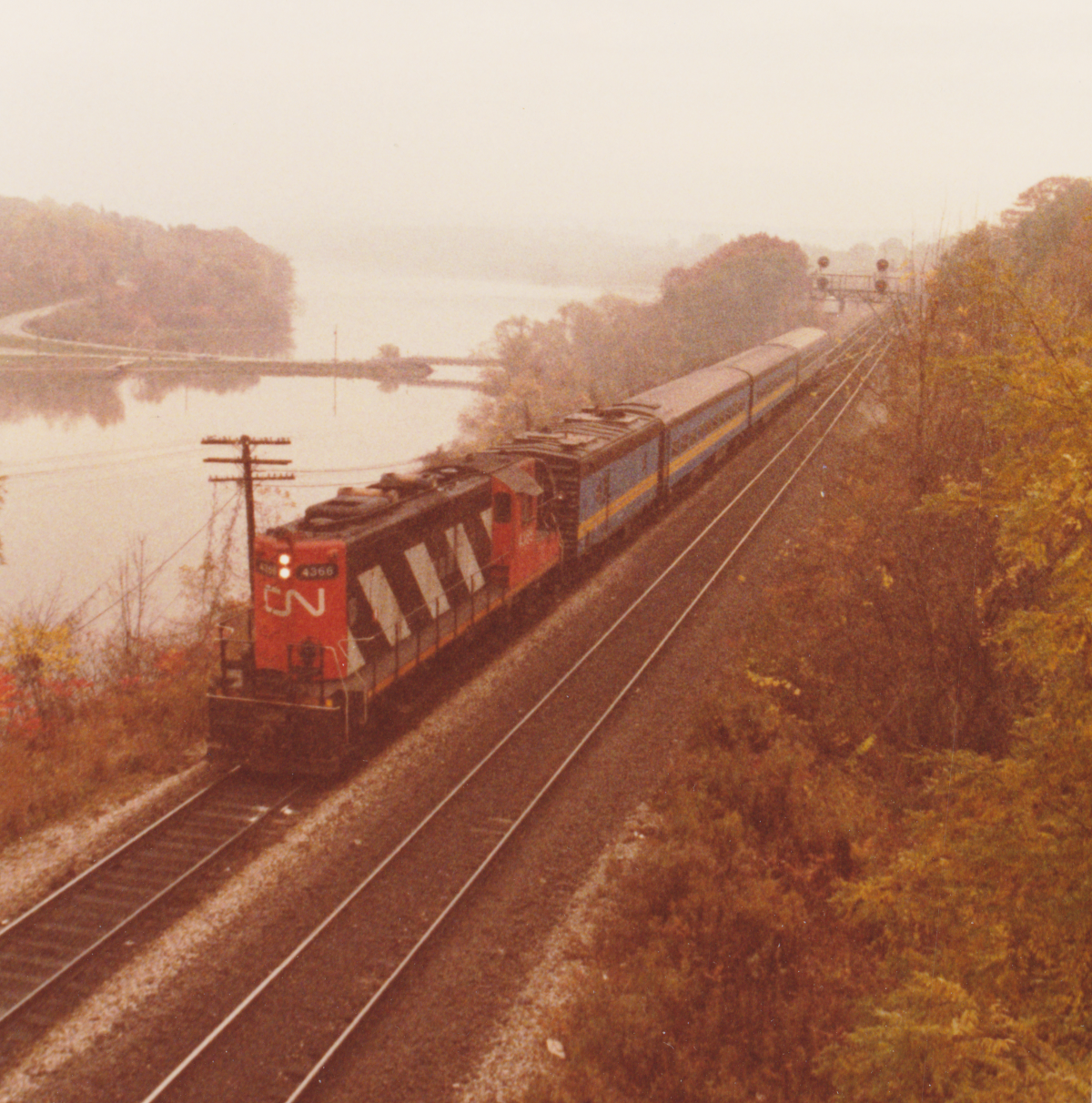 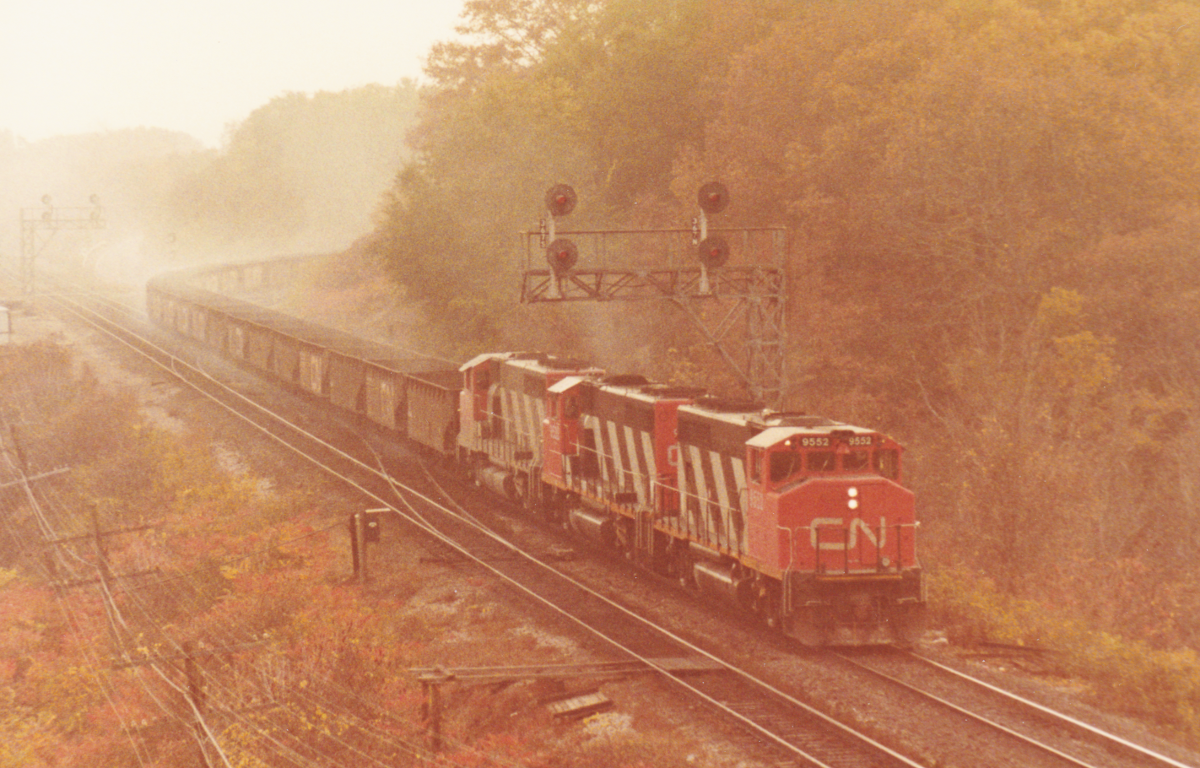 You can see that the brakes have warmed up somewhat.