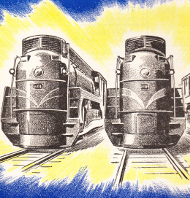 This post shows Pool Train schedules on both railways during World War Two.

As you may recall from Part 1, Canada had - well - a Railway Problem which demanded fresh approaches to economical operations by the CNR Crown Corporation and the private CPR. The financial crash at the end of the 1920s, and the beginning of the Great Depression of the 1930s precipitated a Royal Commission and prescriptions for action.

The railways would have to cooperate in some areas and the Pool train system - used in passenger-dense regions - was one economy measure which endured for about three decades ...

As a coarse generalization ... between two passenger-rich cities, a standardized mixed consist of both railways' equipment would travel between the same two passenger stations, using the motive power of one railway, and using one route over the rails of both railways - if this routing was the fastest and most direct. Crews and locomotive terminals used for engine servicing were also shared as necessary.

The Second World War period probably marked the peak of non-pleasure rail travel in Canada. Using a CPR and a CNR passenger timetable from almost the same period, late in the war ... you'll see the Pool train system operating ... at the point in the war when the territory held by the Axis Powers was starting to contract. 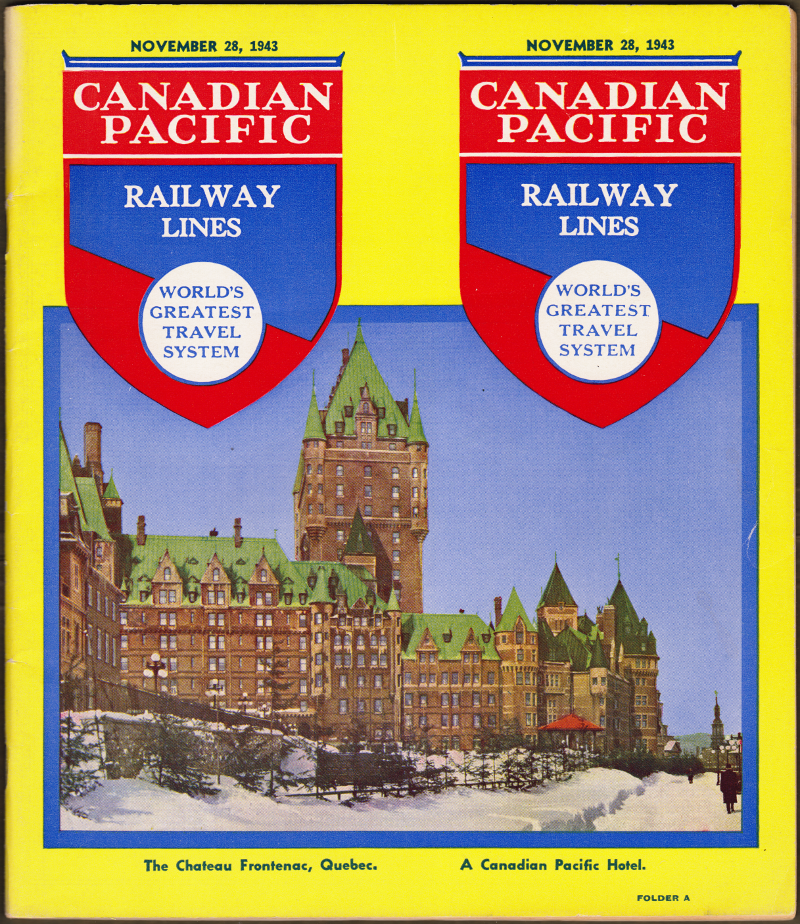 In these timetables, the railways encouraged thoughtful, resource-conservative wartime behaviour from their customers - you will see some wartime advertisements below. They were also keen to carefully promote their own corporate support of the war effort. A good illustration of subtle corporate self-promotion is shown on the cover of the timetable above.

... Following up on a hunch, I confirmed that the Quebec Conference was held from August 17 to 24, 1943. As you noticed, the effective date of the timetable was November 1943.

The photo is taken at the Quebec Citadel - completed after the War of 1812 ... during the years 1820-1850. The Citadel is the (an) official residence of the Governor General of Canada.

For this post, I was looking for the familiar Quebec Conference photograph of President Roosevelt, Prime Minister Churchill and Canada's Prime Minister Mackenzie King ... or 'King!' - as Roosevelt accurately rendered his family name. Roosevelt had little use for Mackenzie King's double-barreled affectation. These three leaders are generally shown on the boardwalk near the CPR Hotel.

For the purposes of this conference, the Canadian government was only the host - the Americans (according to the large and heavy book credited above) didn't want the event overrun by every country allied with the US in the western hemisphere.

The British delegation had crossed the Atlantic on the RMS Queen Mary and Churchill broke away to see Roosevelt at his family estate for personal discussions. Meanwhile, their military officials discussed issues such as the best method to use to conquer the now-Mussolini-less European Axis Powers ...  would it be via Italy and the Balkans (Churchill was still fascinated by the Balkans, cf the Gallipoli debacle, 1915-1916) ...  or via a riskier cross-Channel effort. Should an American or Briton command the main invasion?

Some of Churchill's ideas on strategic geography were influenced by his attitude toward the preservation of the far-flung British Empire. The Americans were more interested in their vision of the future - when there would be only two Great Powers remaining. The Conference is even more difficult to summarize concisely than Pool trains!

A few hours after I posted this, my brother was over for a quick Easter Sunday visit
and to give me a copy of his new book:
Trackside with VIA, Research and Recollections


He also provided me with some interesting artifacts, including the CPR Annual Report 1943 from March 13, 1944.

In the first version of this post, I speculated about the role of the CPR's Chateau Frontenac in the Quebec Conference. Here is the account from the annual report: 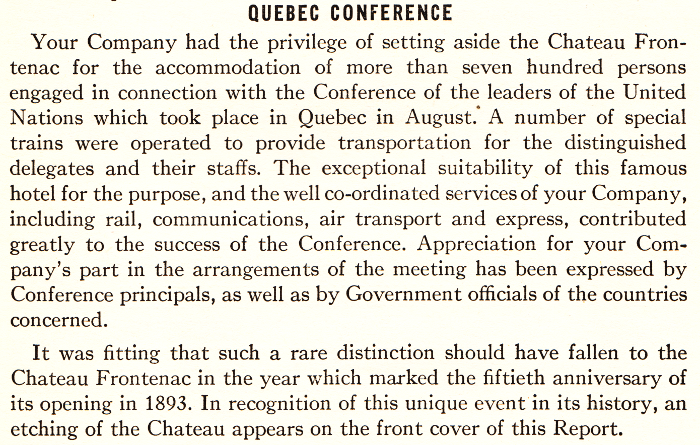 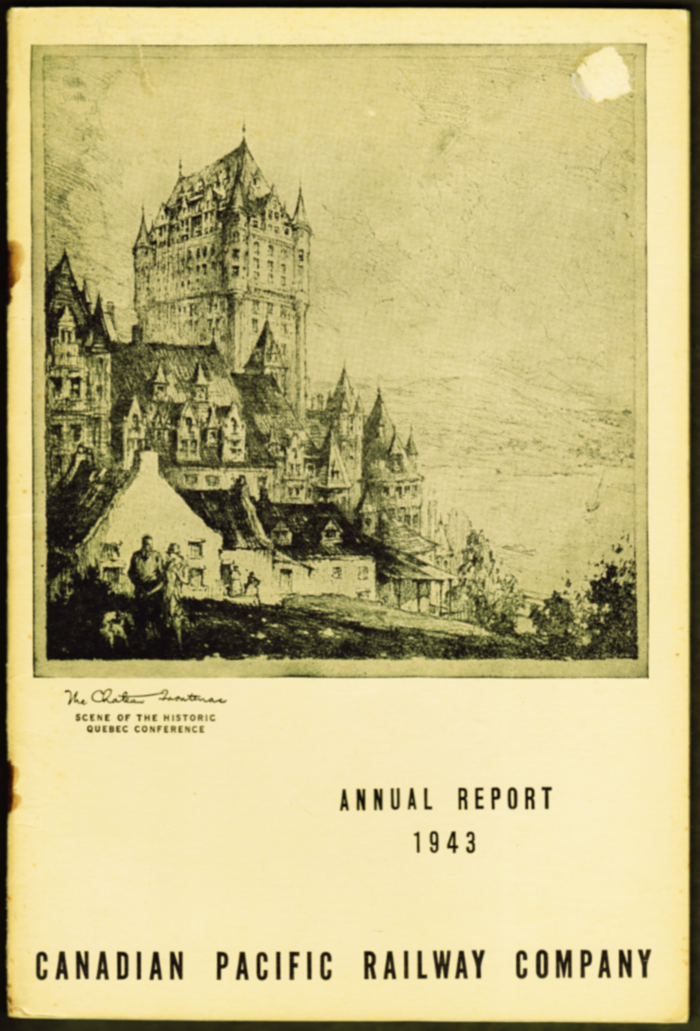 Now, continuing with the CPR timetable ...

In both cases, I included the railway maps provided in the timetables - as a number of readers, now and in the future, will not be aware of all the junction points which once existed within the Canadian railway network. Initially, I investigated the idea of juxtaposing the timetable pages covering the same pool trains for both railways.

For example, Pool train 358 appears in both timetables (because that's the whole Pool idea!), so I would have juxtaposed the CPR table: Montreal, Windsor station to Quebec City, Palais station ... with the CNR's table rendition of exactly the same train on their Montreal - Quebec City table.

However, there were complications. For example: there are different timetable layouts, and different geographical areas covered by tables ... i.e. secondary lines used as Pool routes don't match even though many of the primary routes did in a given pair of tables. As well, 'city pairs' tables didn't match consistently between the railways - on account of their through-routing of their own particular equipment as a non-Pool train beyond Pool zone limits (e.g. beyond Toronto to Chicago). If you made it through the frustration of trying to understand this paragraph, you understand the frustration I would have caused for readers by interleaving the railways' tables.

So the pages appear in numerical order. Even the smallest reference completing a Pool train record (e.g. listing one Pool train's equipment) qualified that page for inclusion. There is lots of interesting information peripheral to the Pool train story for those of us who question the wisdom of this whole Pool system.

As public relations 'vehicles' it is hard to imagine either railway taking many publicity photos of the ill-assorted equipment of these trains for corporate promotion.

It is also hard to imagine that today's concept of 'consumer preference' or 'ease of use' was considered by the government or the railways before concocting this whole project. Above, right: Notice the Pool coach trains operating at peak travelling time during the Christmas holidays. Here is a brief, contemporary 'intermission' between the CPR and CNR timetables.
This is from the Canada Handbook of 1944, published by the Dominion Bureau of Statistics.
Some images are small, dark and nasty examples of wartime printing which I have lightened to show more detail. 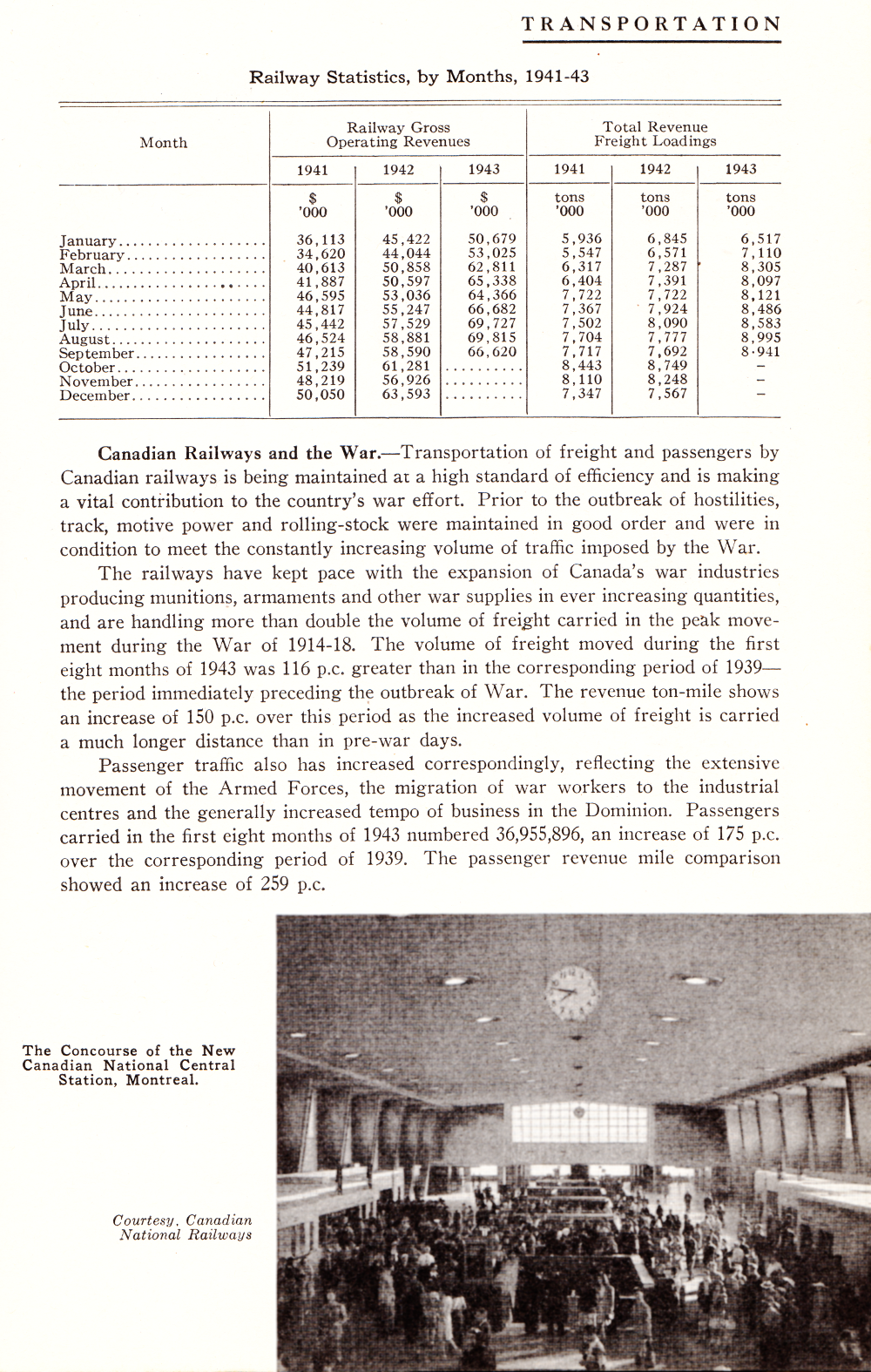 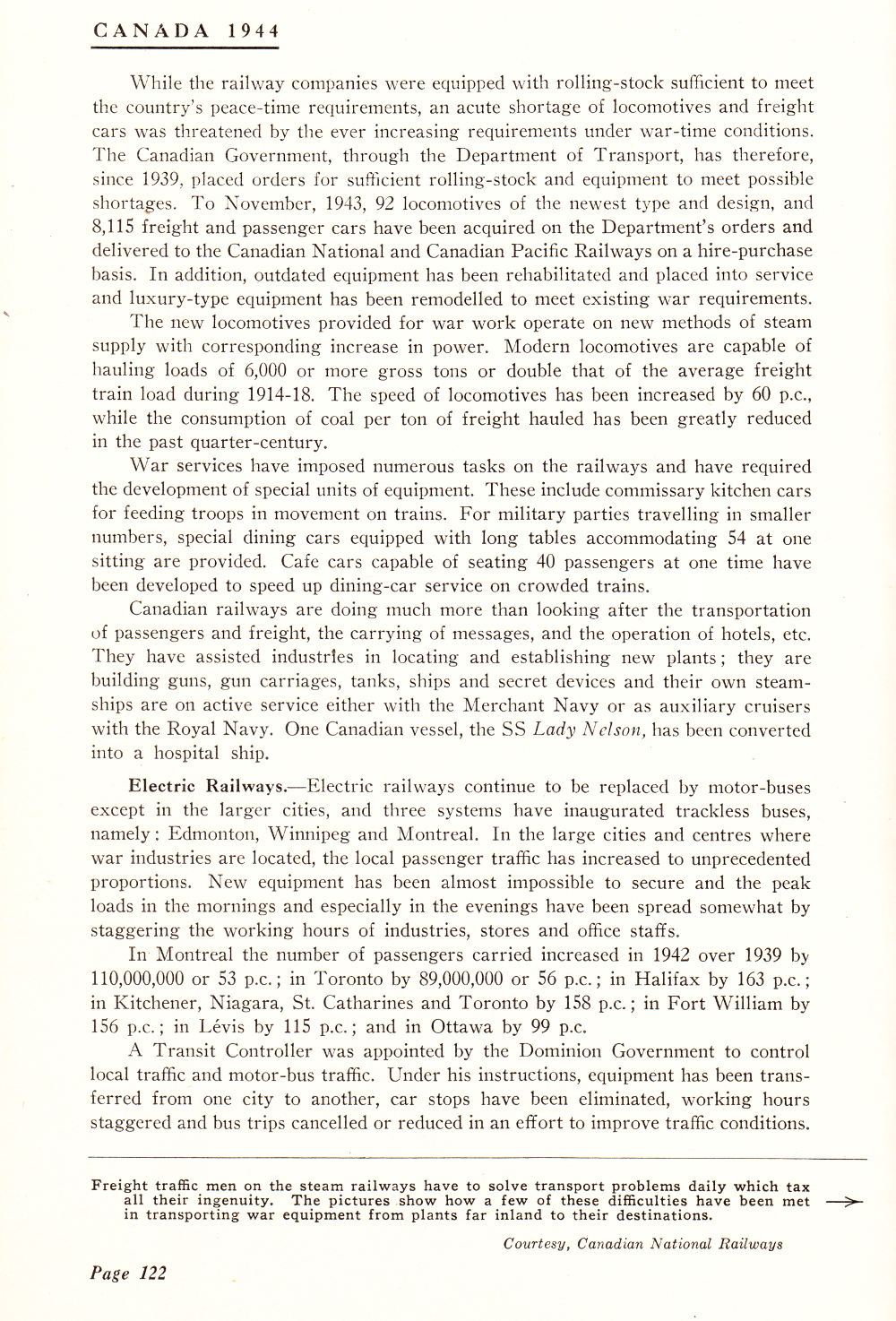 If you think of these timetables as media for the temporary storage of data - for about six months,
these paper records have survived roughly 150 times their original intended lifespans.

Before I purchased it, the CNR timetable was stored with a vertical fold which is very resistant to flattening.
Consequently, some mid-page characters are slightly out of focus. 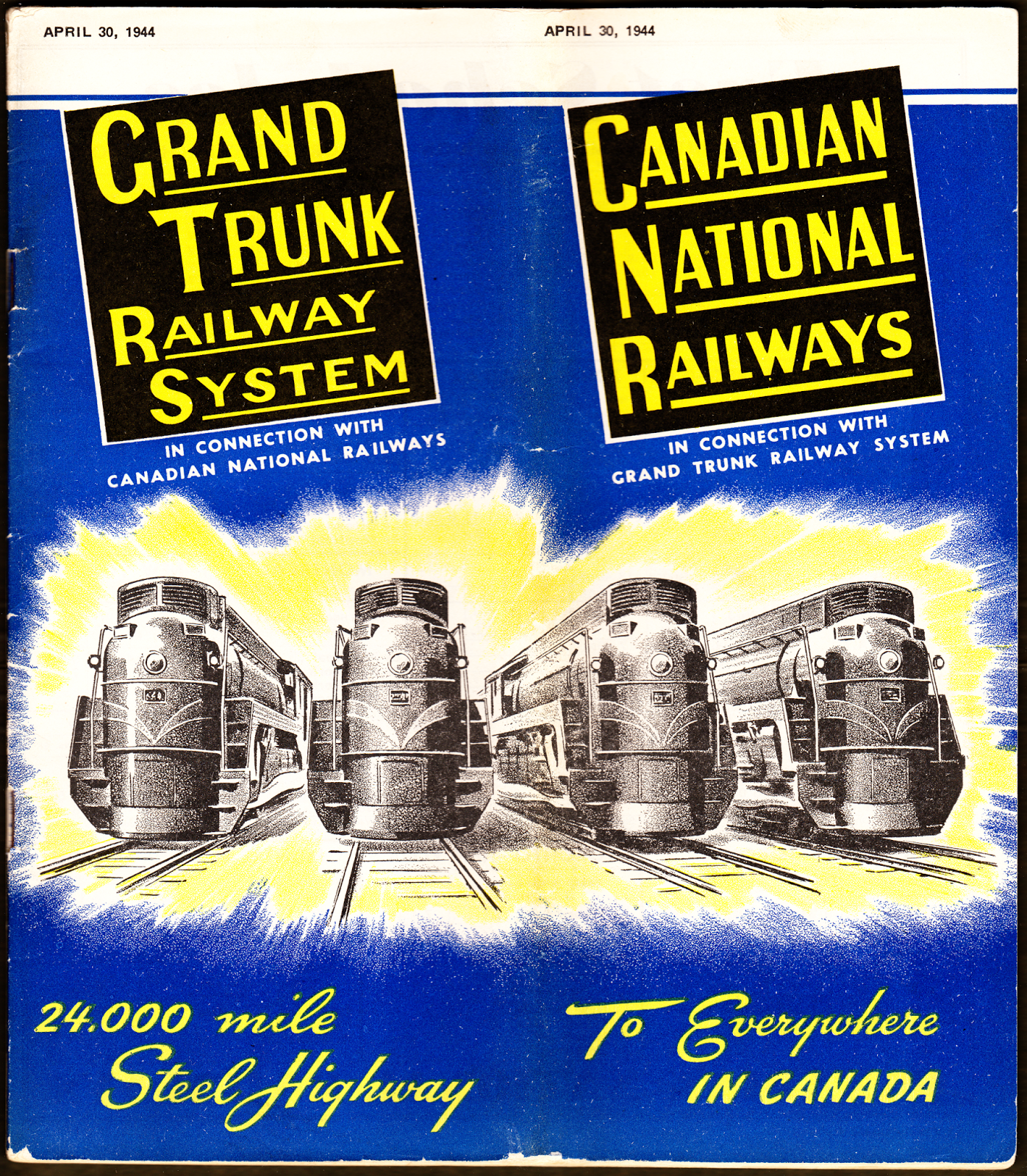 Sharp-eyed readers will spot some wartime features, such as the RCAF facilities at Lachine, Mountain View and Picton airport. A future post will look at Pool trains after the war.