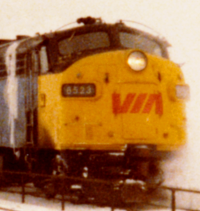 This post looks at VIA trains at Kingston in the early 1980s.
It is a thematic exposition combining leaking high-pressure steam with snow. 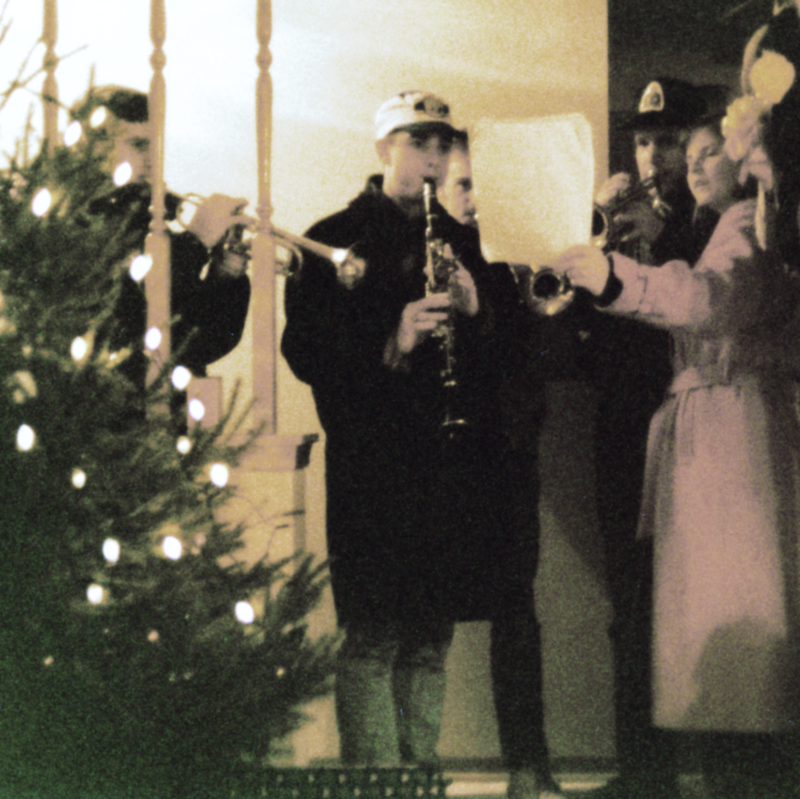 In the early 1980s, bulbs with incandescent tungsten filaments lit our homes
and saturated hand-held time exposures with yellow.

In high school, kids had the option of taking instrumental music classes.
There is enough knowledge and talent here to synthesize Christmas carols or locomotive whistles. 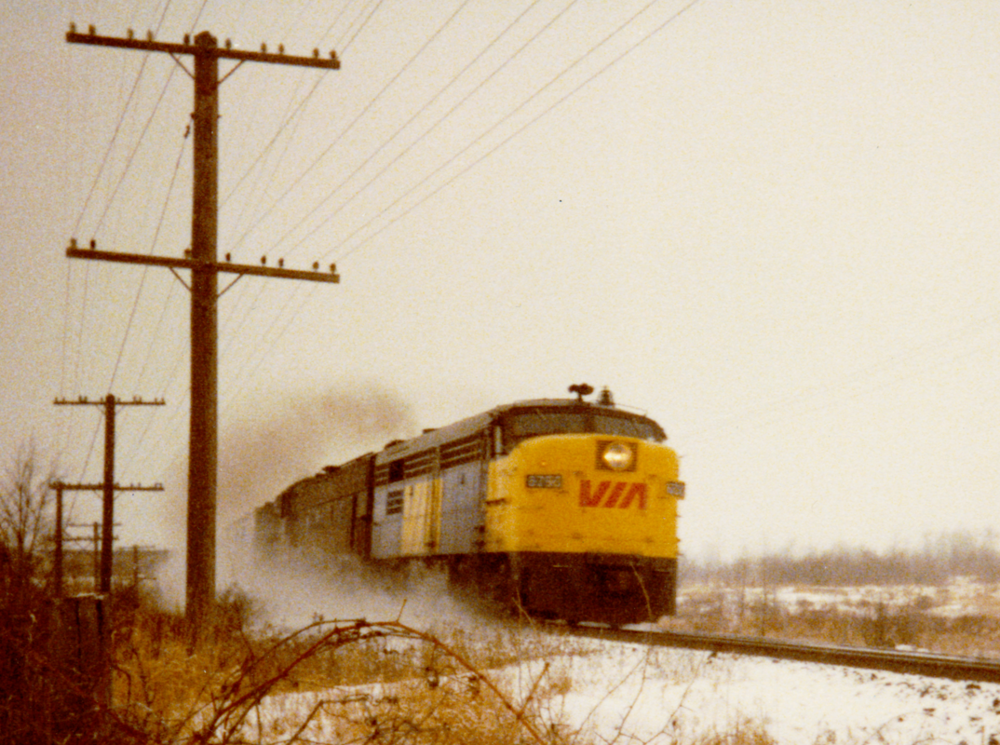 Nearby: An eastbound rolls by mile 183 on the Kingston Sub.
The rail snapshots before the timetable are circa 1981 and were taken with a camera using 110 cassette film. 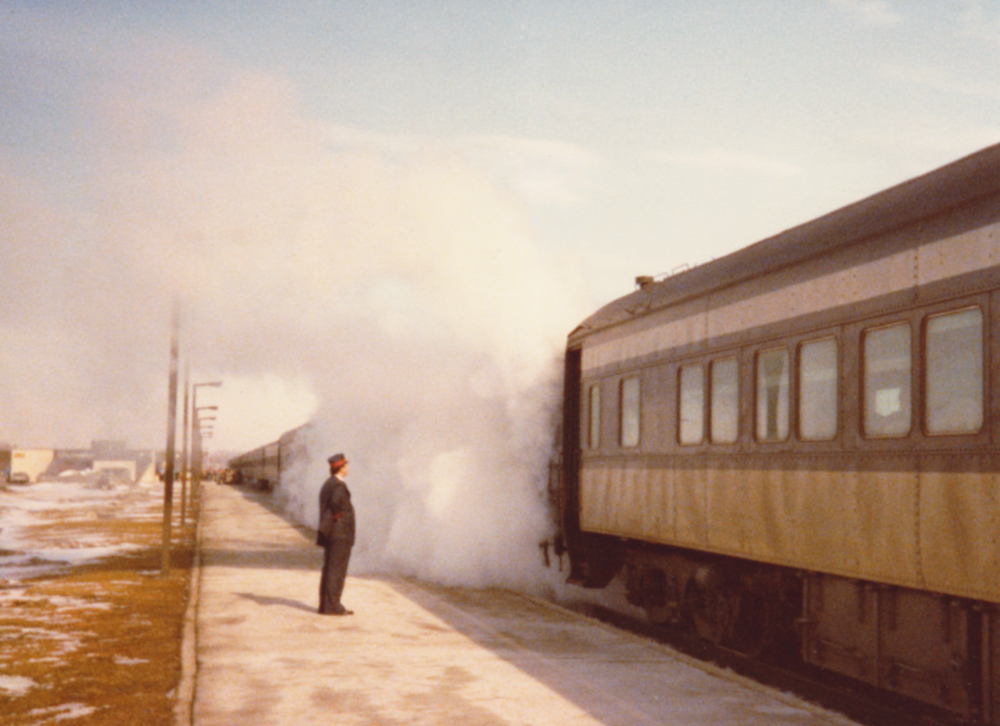 The westbound is loading one of the last cars ... 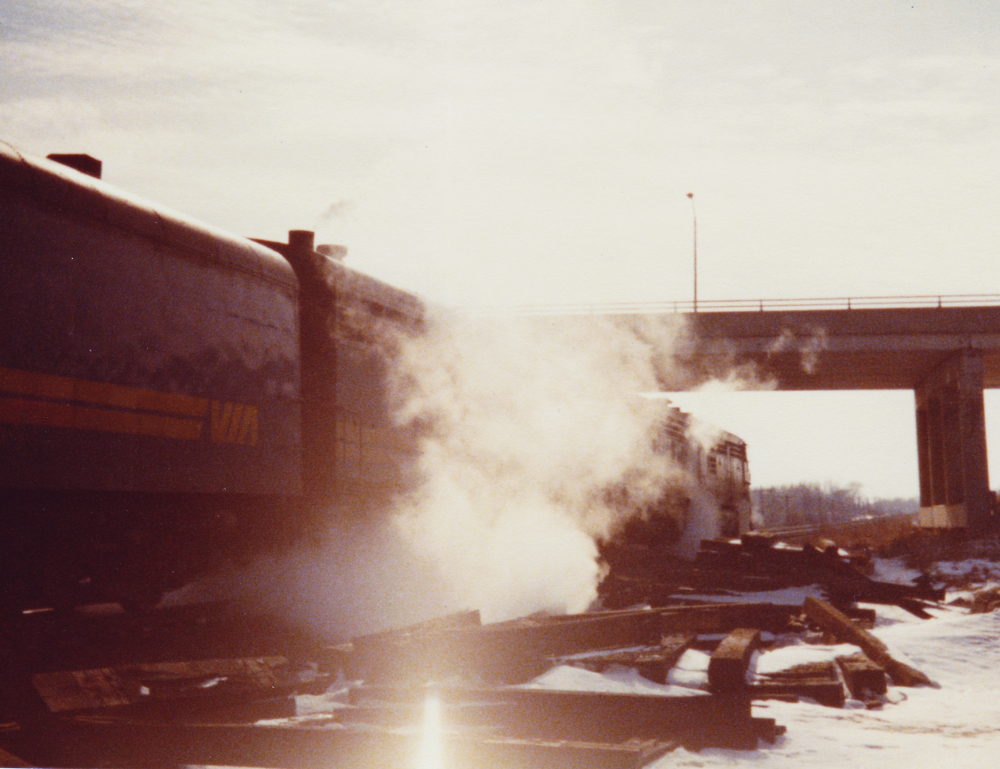 ... the long train has the power and the leading steam leak spotted beyond the end of the platform.
Pardon my corona.

The ties piled so nicely may have come from renewals between the platforms. 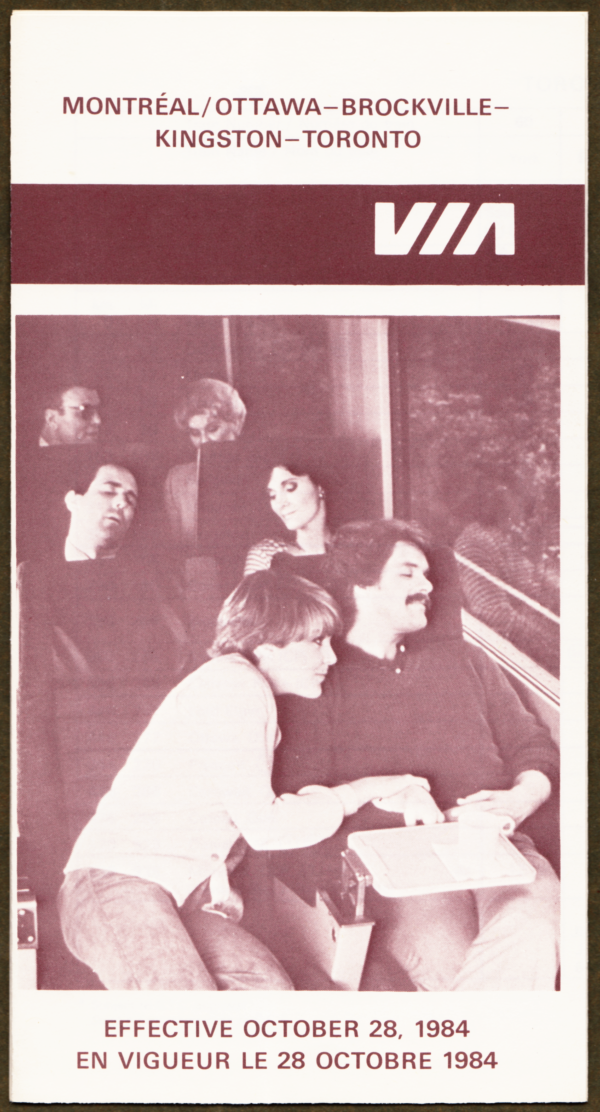 The next time your new LRC is stalled somewhere in the bush, don't despair and pass out ...
you might see a chickadee or something on a fencepost while you wait.

As I take another careful over-the-shoulder potshot at interpreting recent Canadian railway history,
I can assure you that I have not included photos of trains 561, 565, 560 or 564.

We made rather merry at the sight of such VIA-decorated rolling stock at the station.
The evolving Napanee/Brockville-Smiths Falls-Ottawa track network was not being kind to VIA. 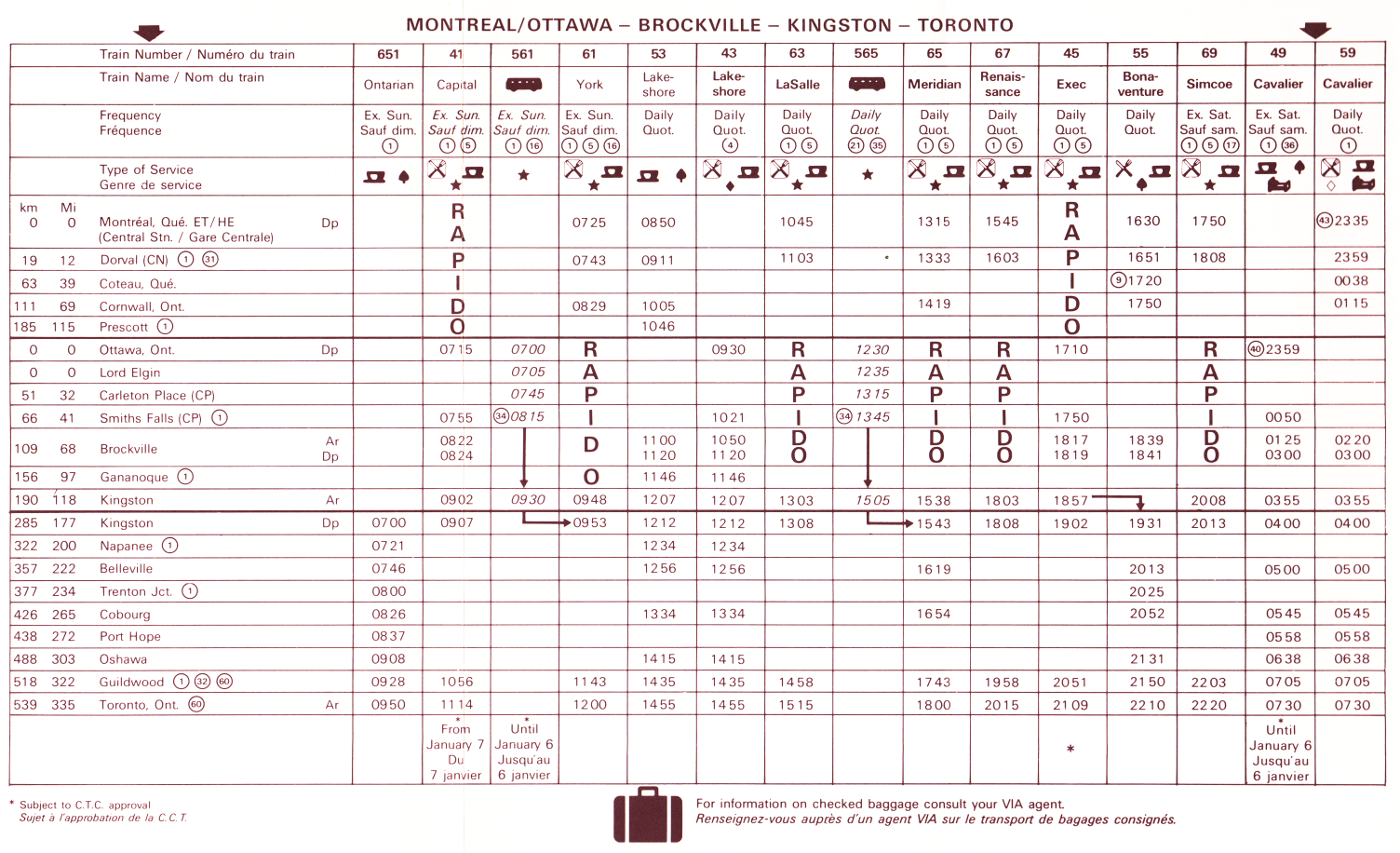 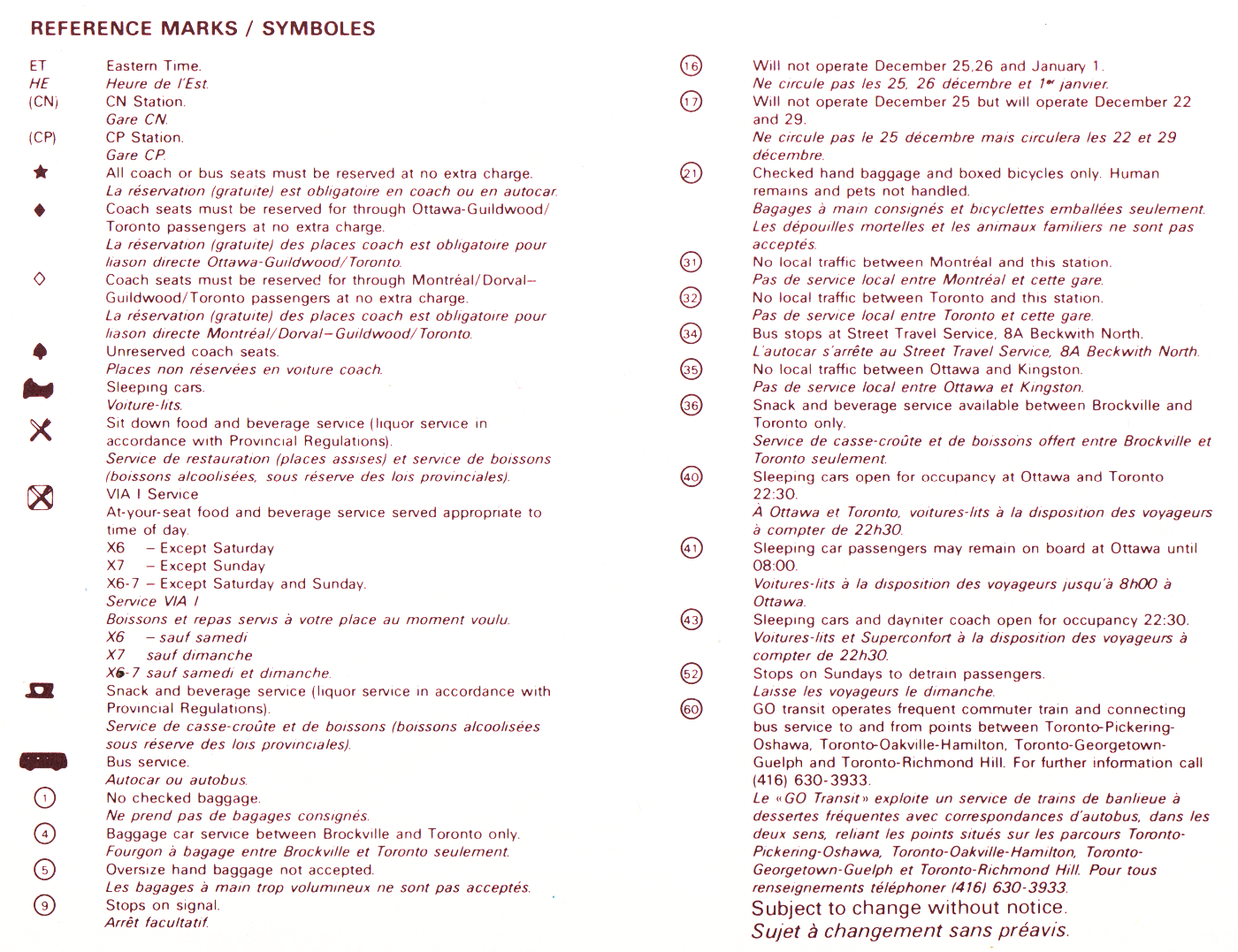 A lifelong contempt for fine print reference marks has caused me to enlarge them significantly. 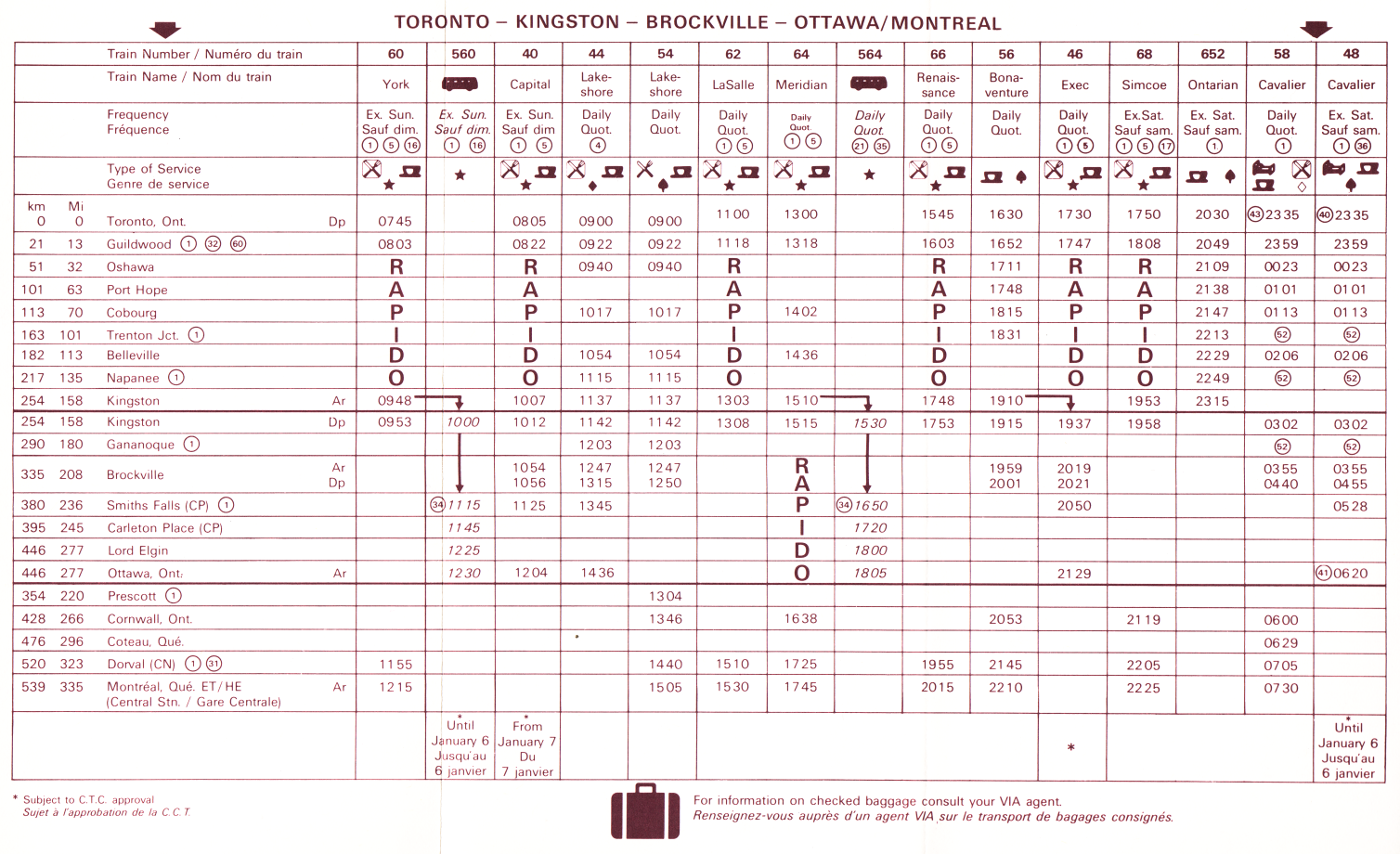 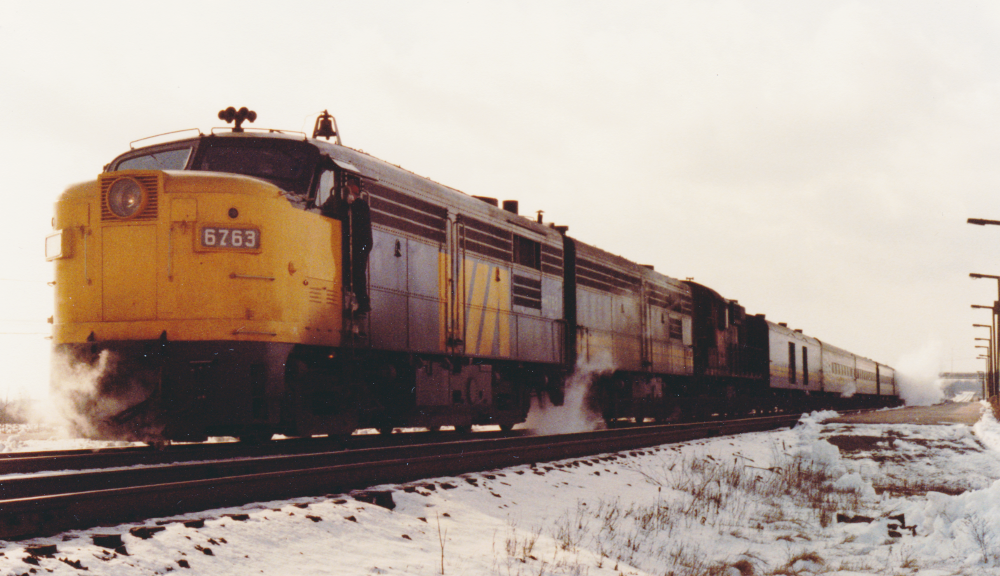 I don't know if that is an Engine Service Brakeman, Baggageman or a train-rider Steam Technician talking into the cab. 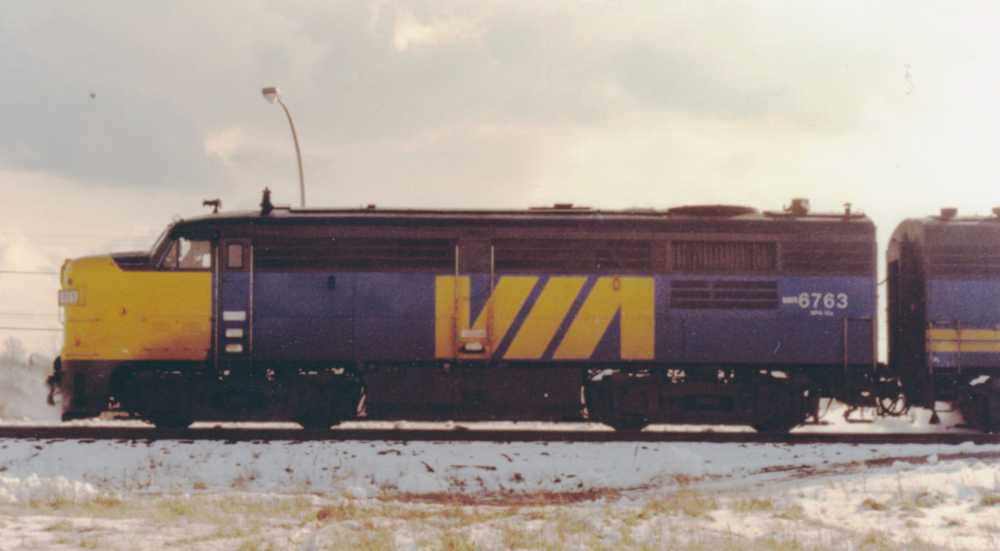 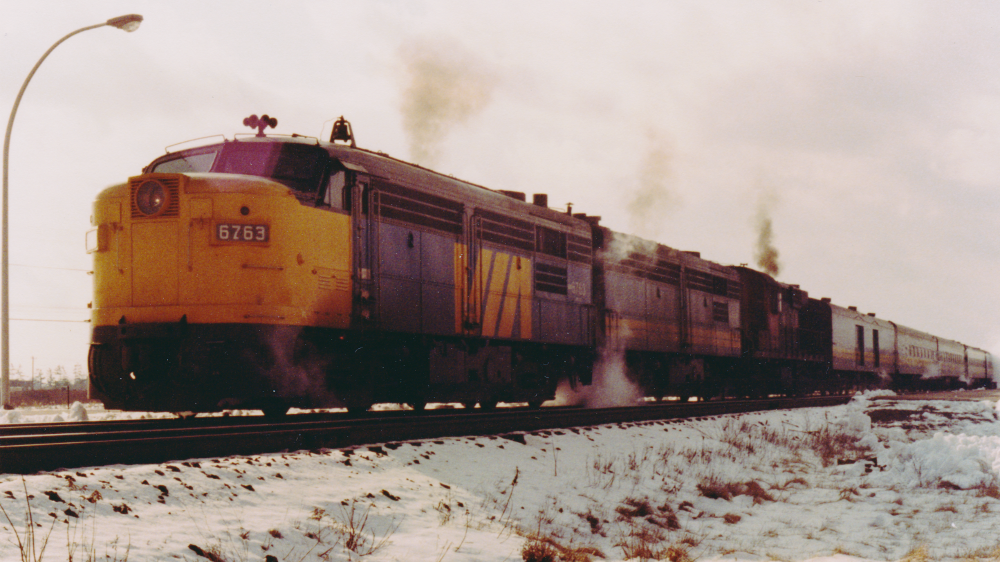 From CN comes a steam-lined RS-18 with no steam generator of its own. 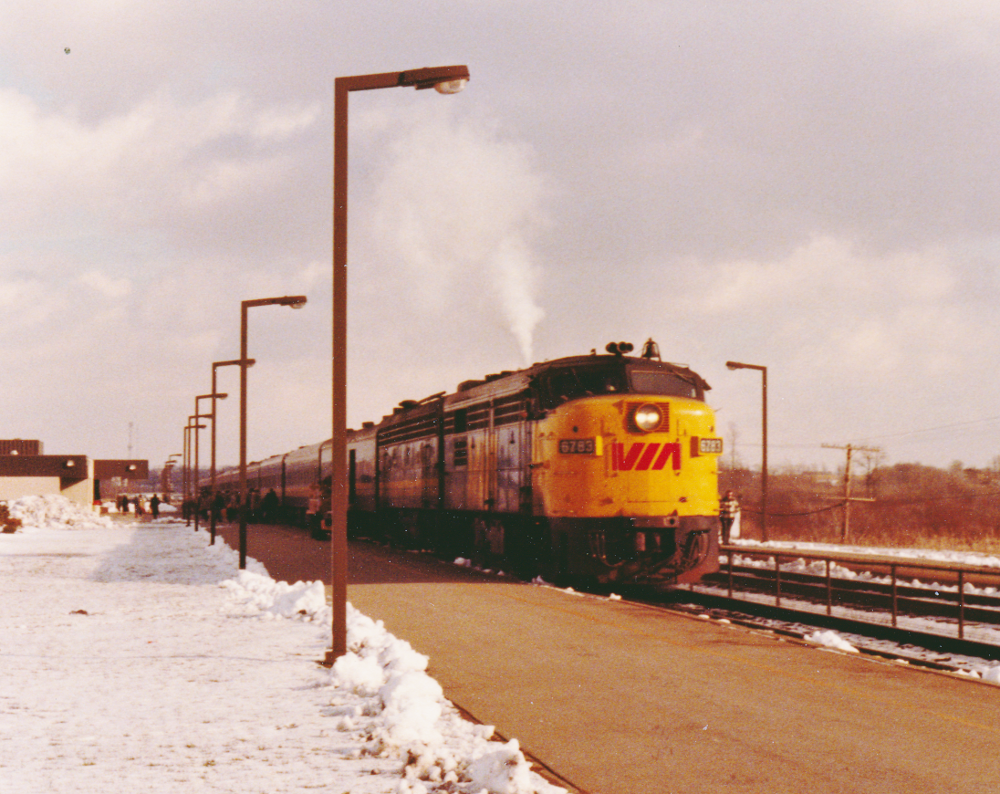 Notice the low-mileage Sears garden tractor used in baggage service on the north platform only. 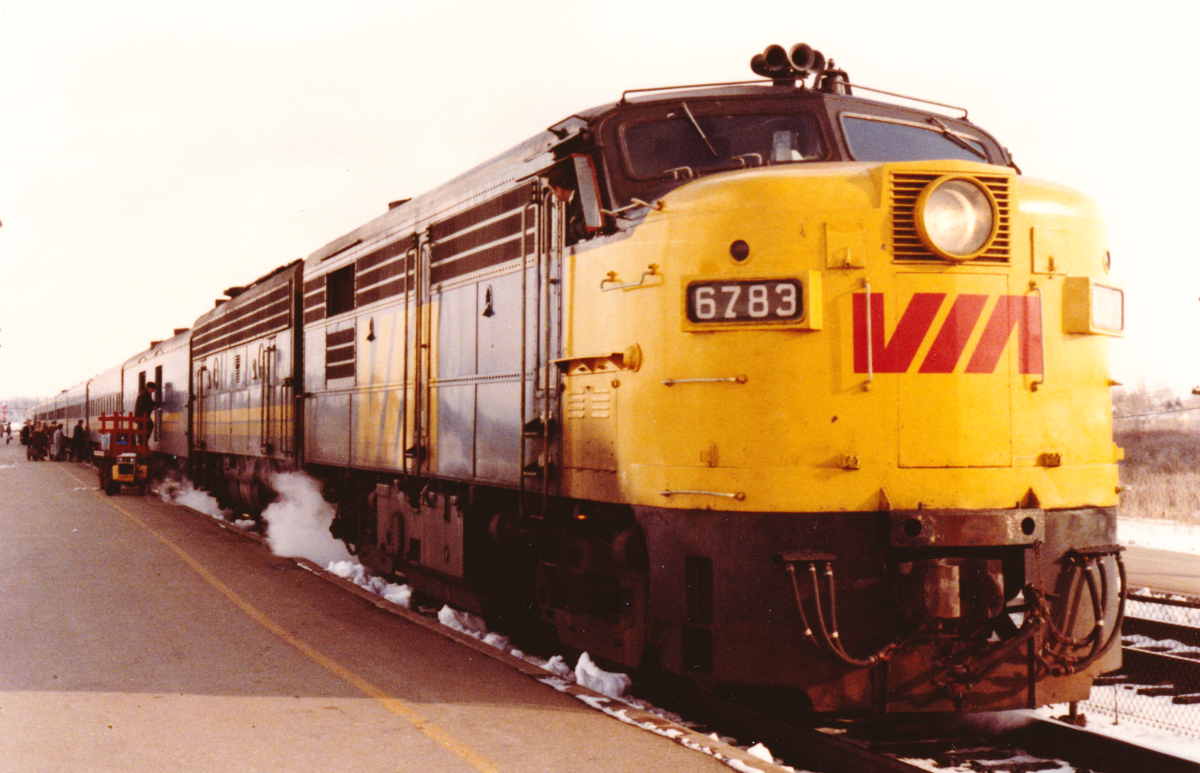 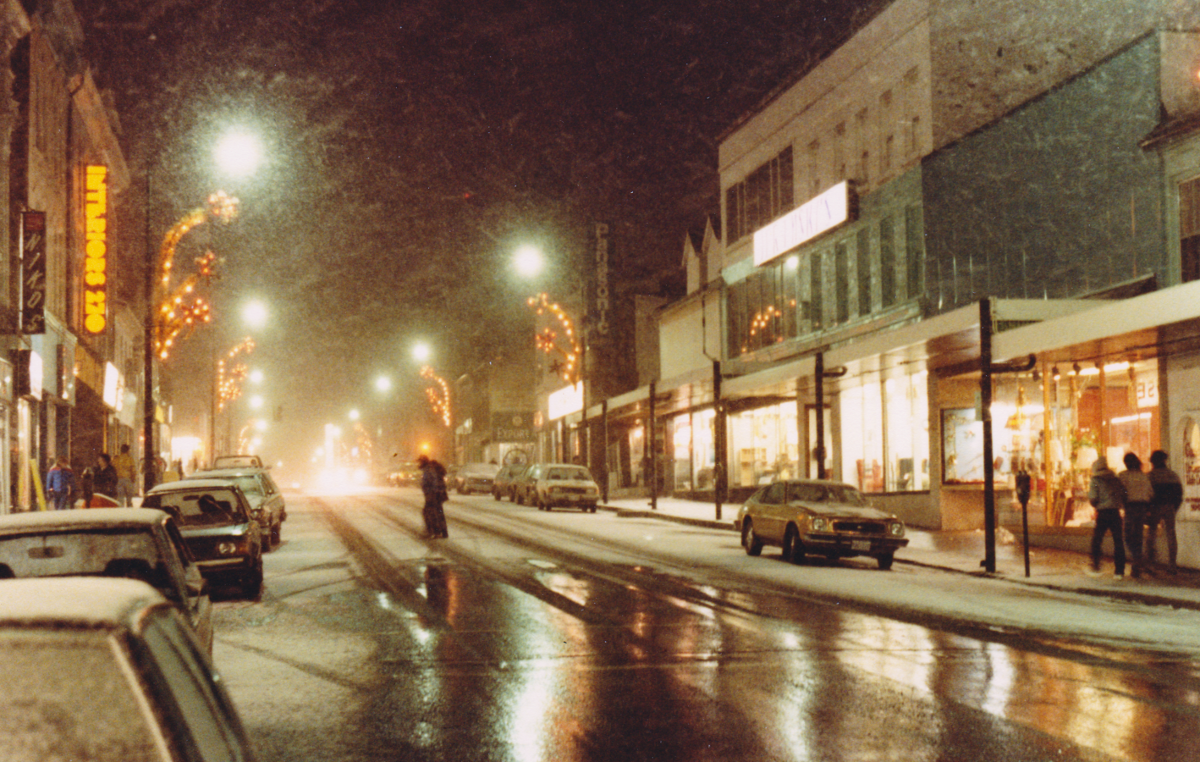 Among other places, it provided service to
the penitentiaries, the asylum and the Grand Trunk 'outer station'.

Below, a plastic banner for a nativity pageant catches the gentle lake breezes. 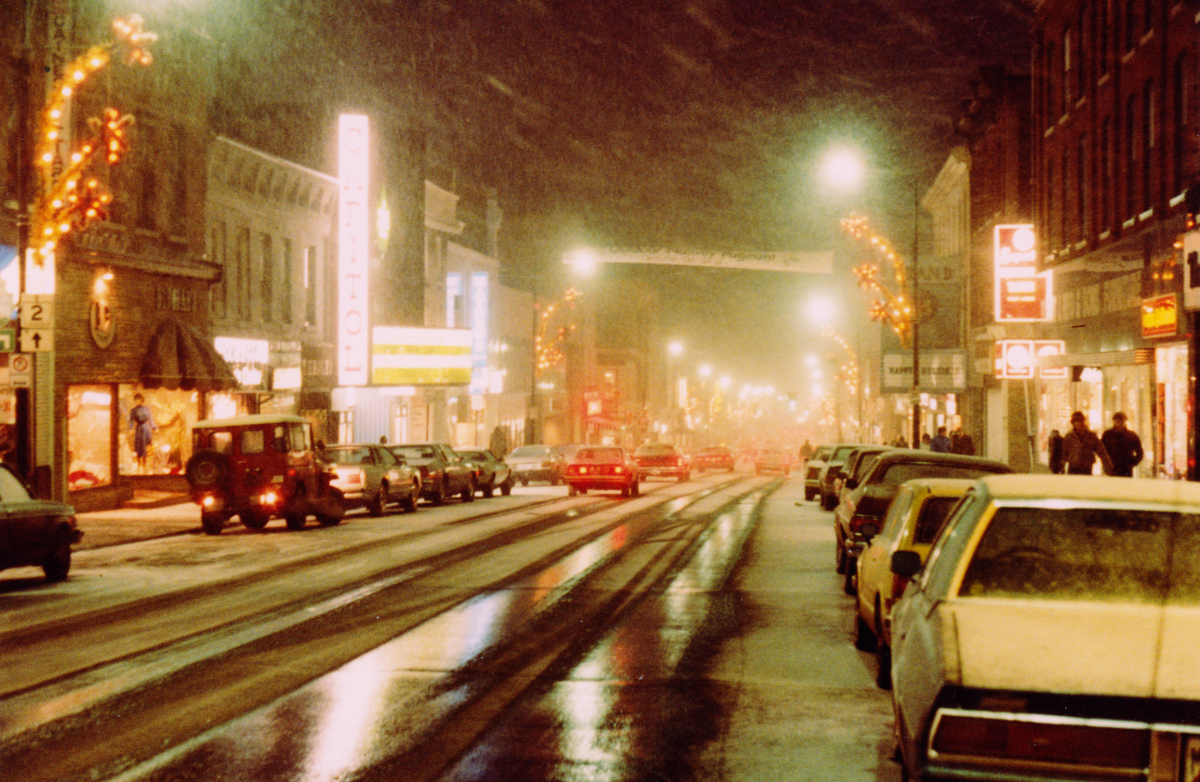 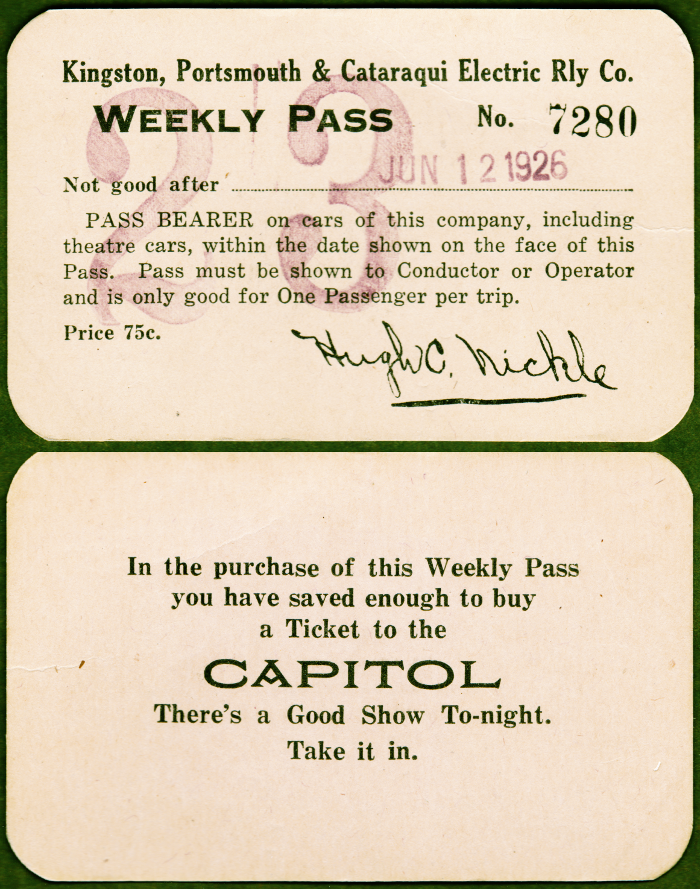