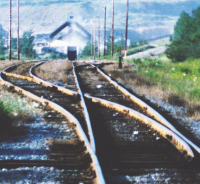 This post looks at some railway features to be seen 'on the way' to and from Newfoundland in July 1988.

An eminent Canadian railway historian and photographer, hopefully as a generalization for society, advised me to avoid the temptation to over-process a photograph with a computer program - because that is what it will end up looking like. For someone like him - who produces beautiful fine-grained, perfectly-exposed photos - this matters.

With the chemical deterioration of some of my prints - many of which were taken during a 10-second highway shoulder stop in perfect 'vacation weather' - heavy overcast ... I can assure you that the risk is not confecting a 'too-cute' image. The challenge is to find what I was trying to photograph within the blue murk.

Computer 'enhancement' process: With many of my old prints, making them usable is somewhat like the work to level a six-legged table on an uneven floor with a handsaw - while the table is loaded with anvils.

I proudly present to you ... a curated selection of six-legged tables ! ...

The Truro Subdivision of the Dominion Atlantic Railway

On the CNR public timetable map from 1944, above, you can see the track triangle formed by Windsor, Truro and Windsor Junction. Except for on-line traffic, the Windsor-Truro segment was not really useful as a through route, it seems. All the DAR action was drawn, via Windsor Jct, to the bright lights of Halifax.

My plan to perform some 'jiffy railway archeology' of the Windsor-Truro line in 1988 came about because it seemed to have disappeared (then) about 20-30 years earlier.

Notice the light rail, above.
This general traffic route may be a causeway now.

The full extent of the Dominion Atlantic Railway can be seen in the subdivision list below which comes from a 1936 employee timetable.
The area of interest here is the Truro Sub.

Gypsum loading near Windsor.
The cars have CP reporting marks.
We ended our vacation 'work' day here at 19hr.
The photos are presented in reverse chronological order. 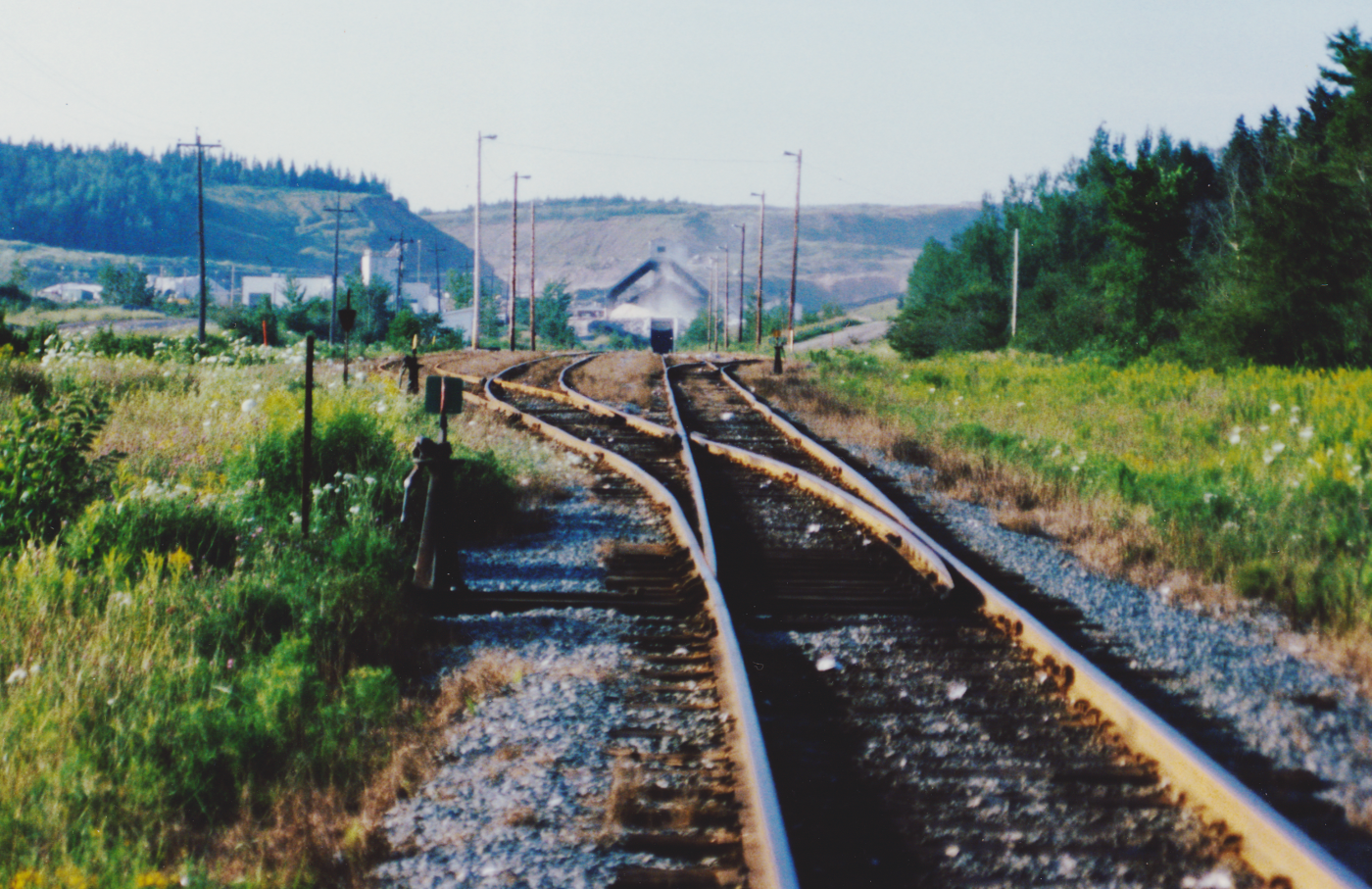 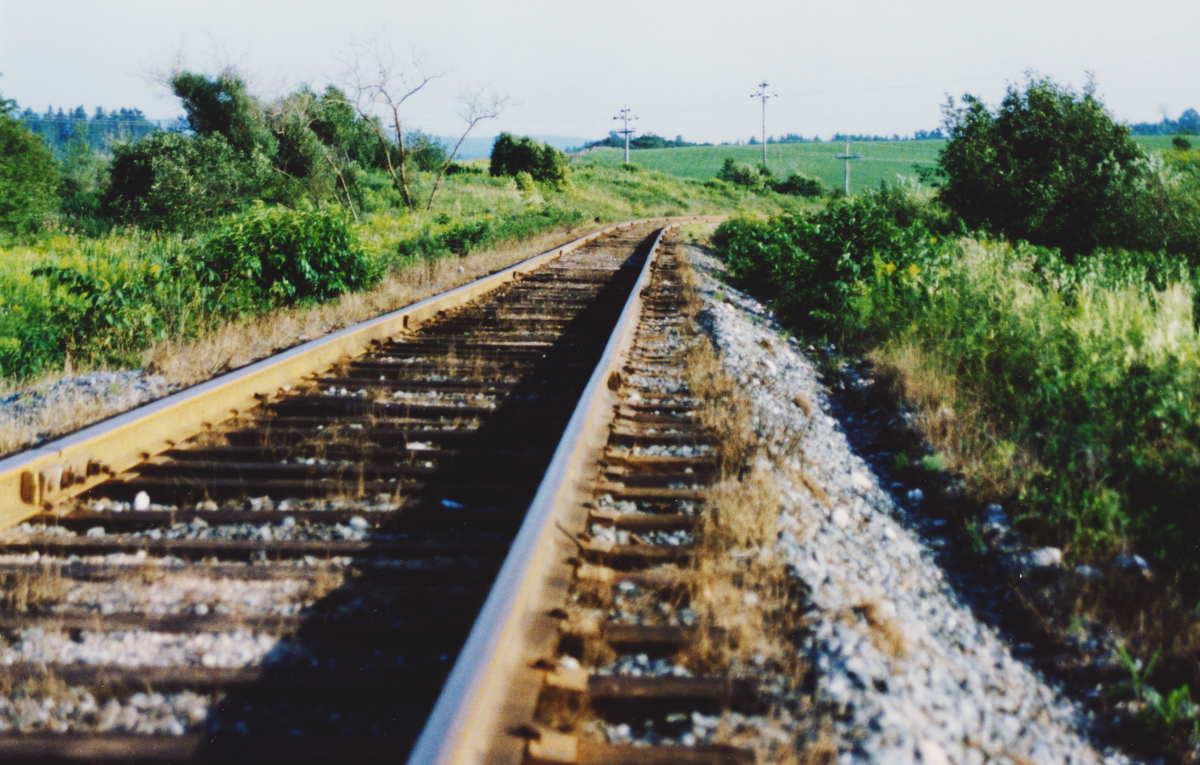 Near mi 4.6, looking toward Windsor - I think the camera was turned 180 degrees from the gypsum mine shot above.
The rail length, bolt pattern and rail joiners are interesting.
Just beyond the curve was the connection to the former DAR Truro Sub.
This may have been the Canadian Gypsum Company track mentioned in the timetable above.
The mine is no longer served by rail. 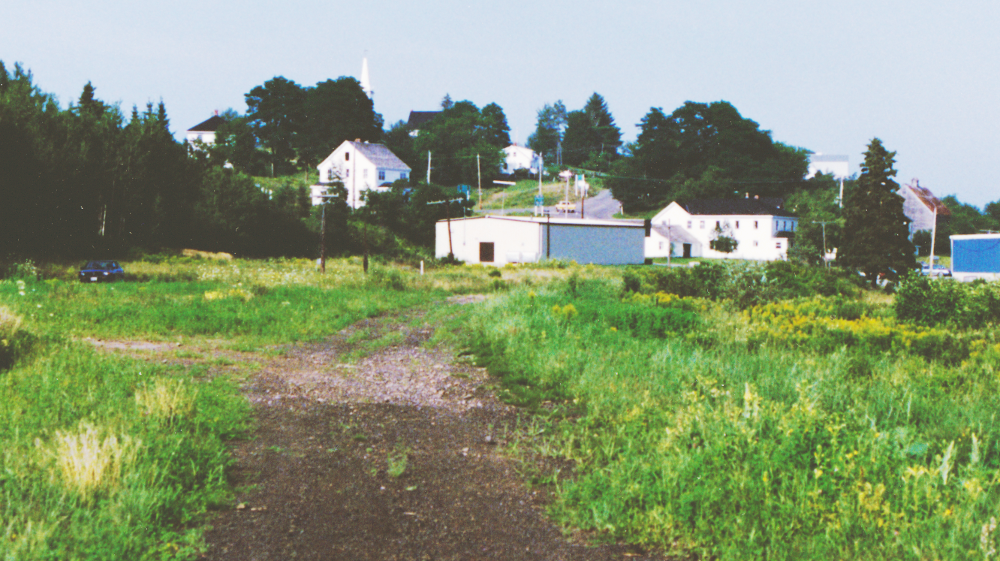 Kennetcook mi 26.4 facing Truro.
I speculated this was the old station site and noted a box for waybills on a pole. 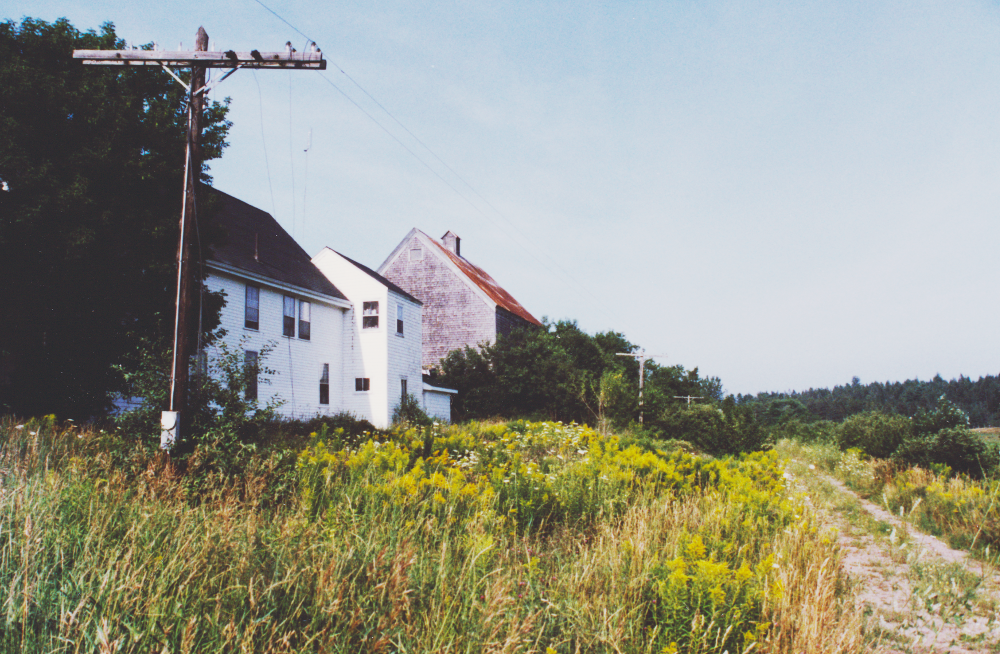 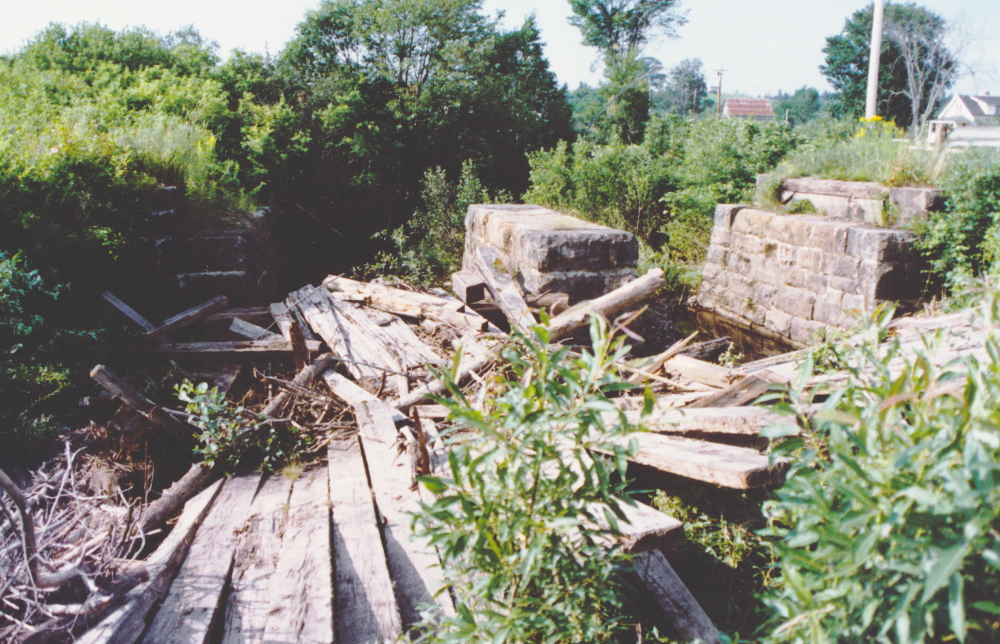 At Burtons mi 35.1 looking toward Truro. 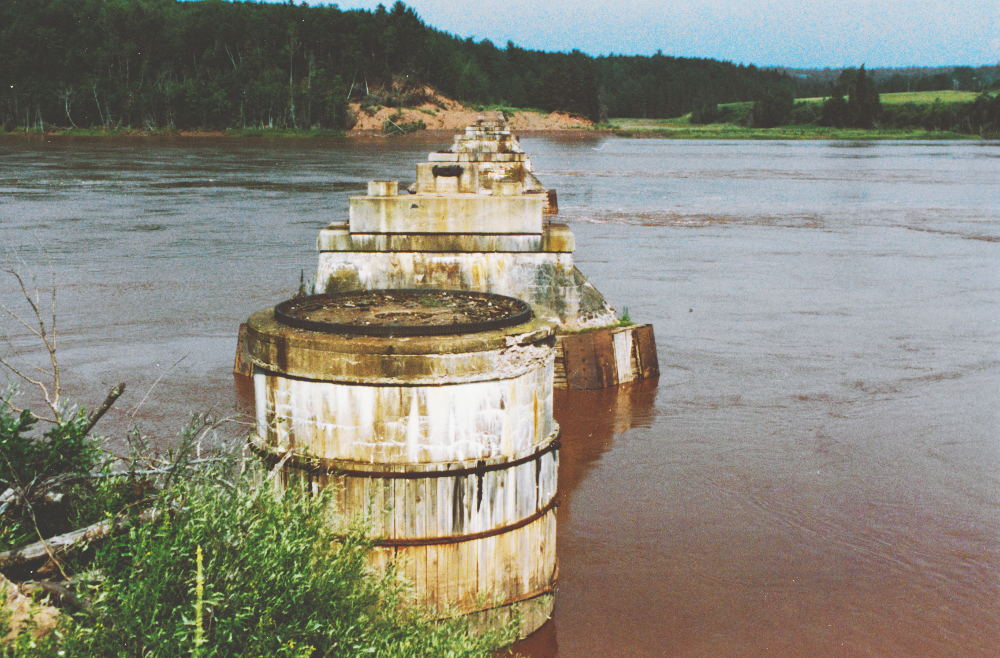 Today on this spot, near South Maitland on the Shubenacadie River, is a 'Fundy Tidal Interpretive Centre'.
A deck reaches the swing-span pier in the foreground so visitors can watch the water below them.
The distant piers have seen significant erosion since our visit.


In the 1960s, I learned to hate adults for creating such disappointments on road maps: If there was really truth in advertising, Grand Falls would have changed its name to 'large hydro dam behind a rocky river valley strewn with large boulders'. In the 1960s, a dangerous rickety wooden staircase led down to a boulder viewing centre with a mosquito petting zoo. 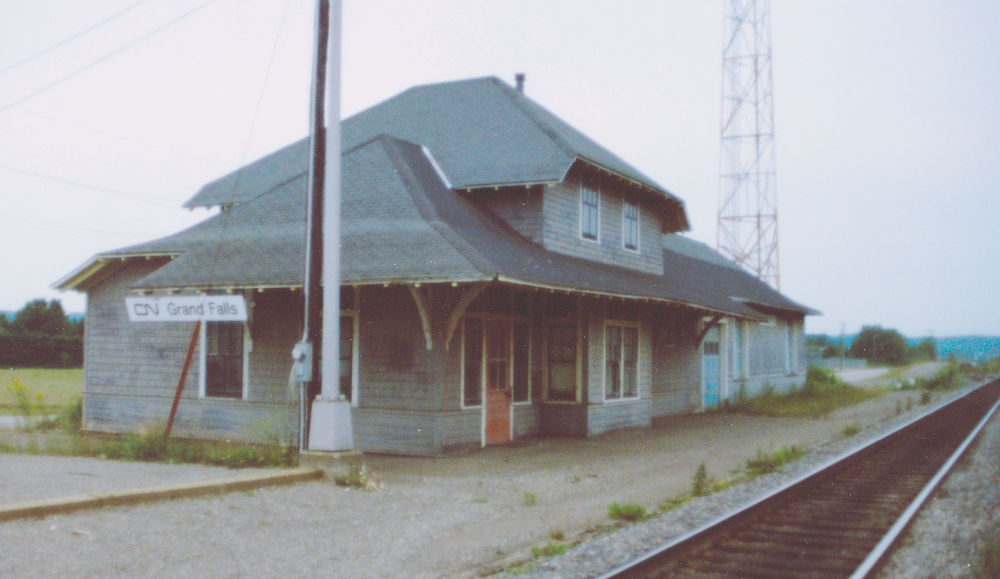 Above, in July 1988, we see remnants from the CN 1960s passenger service rebranding with 'red, white and blue' fares. The building above was designed to be a residence, a communication node (even before the tower) and traffic control point, freight business office, passenger ticket sales centre and waiting area, express office, maybe a maintenance of way depot and perhaps a milk can transshipment point.

Below, it seems it will be replaced by a VIA passenger shelter.

Breaking News: Looking at Google images for '6 Chemin CN' from 2014 ... it is the VIA structure which is gone without a trace. The station is in rough shape, but it remains.


Tatamagouche and Pugwash, Nova Scotia in 1988


Following the main Intercolonial/CNR route from Halifax to Oxford Junction above, and heading east, you will find Pugwash (with access to the Northumberland Strait) and Tatamagouche. 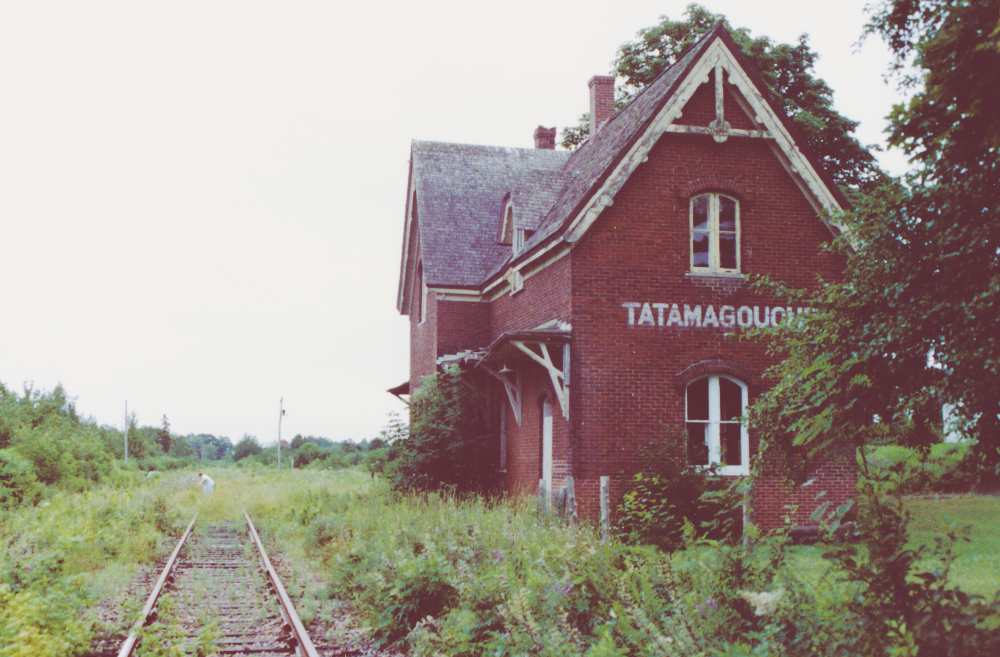 If you look at a recent image of Tatamagouche at 16 Station Road (2013), you will see there was quite a railway preservation transition from the views we grabbed on our way through to Sydney for the Newfoundland ferry. 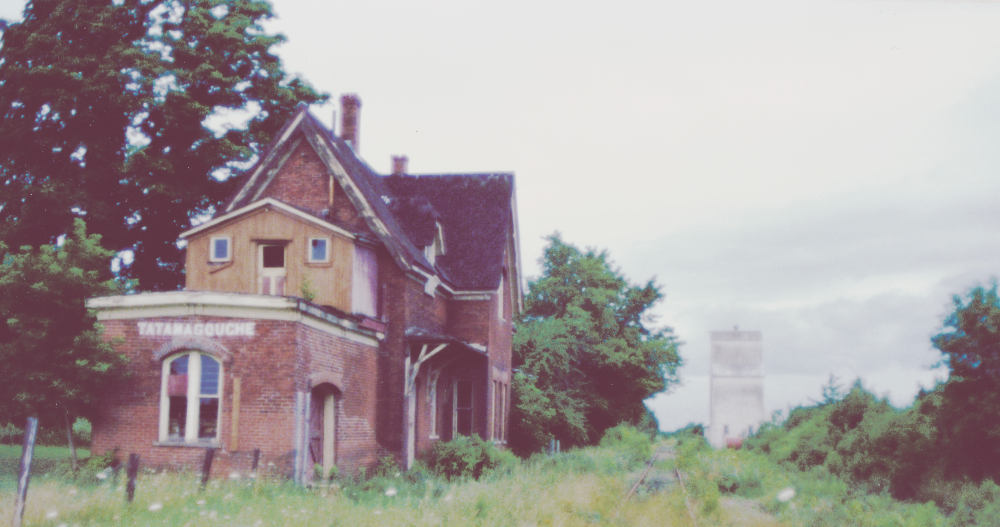 The 1944 public timetable below shows the passenger service on the line.
I have attached the reference marks.


The Pugwash Conferences on Science and World Affairs originated here at a seaside location which was designated a National Historic Site in 2008 - see Pugwash dot org.

Here is the still-extant Windsor salt mine at Pugwash on the Pugwash River/Basin. It is no longer served by rail. At the right on the horizon, you can see a classic mine headframe

Behind the caboose, those with sharp eyes will see a flanger, built in 1915, which was being used as part of a restaurant in 1988.