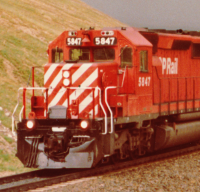 In late May of 1984, we travelled by train to Lake Louise and stayed at the CPR hotel for several days before continuing on to Vancouver.

Beyond enjoying the mountain setting, the hotel and the walking trails, we drove our rental car between Lake Louise and Field to explore the railway activity.

On the afternoon of our arrival, it was sunny and warm - almost shirtsleeve weather. We left our bags and strolled down the lake as we waited for our room to be ready. Depending on the day and the altitude, the weather offered a lot of variety during our stay. 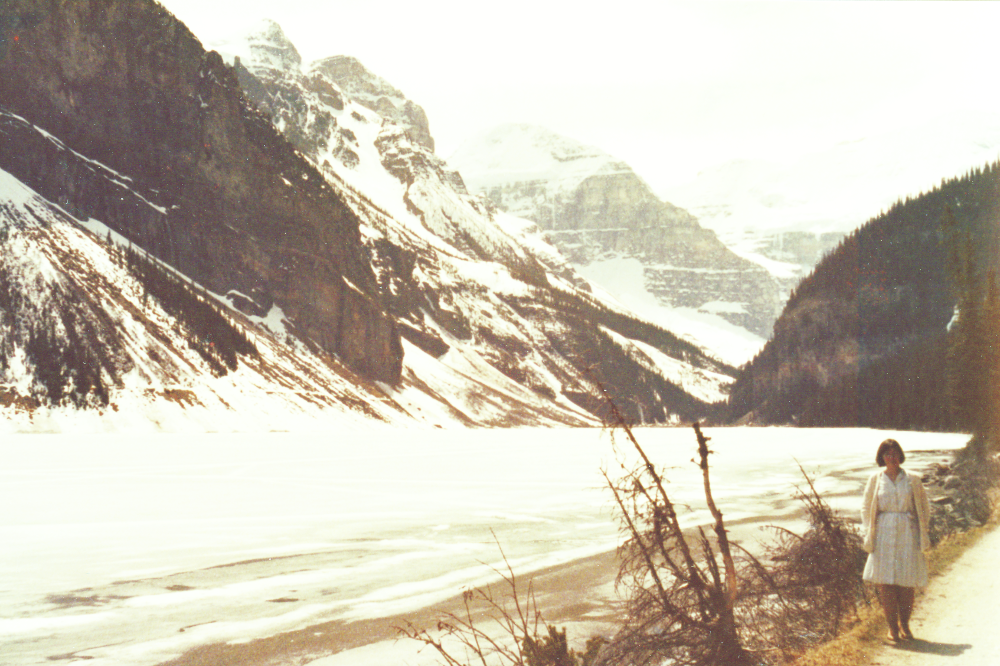 Some of our prints have self-sepia-ed themselves over the years. 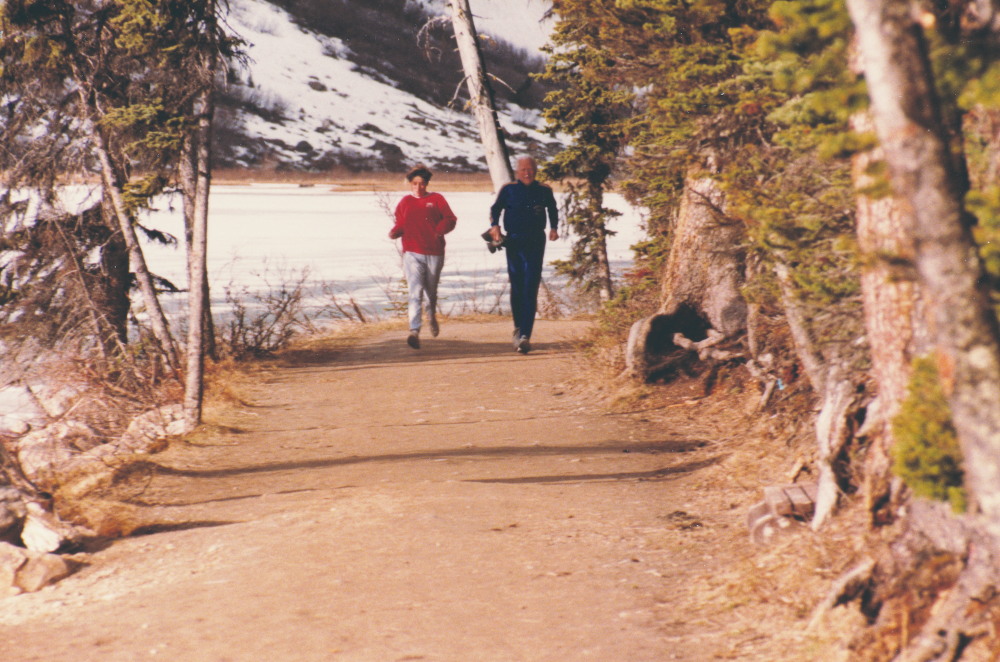 I felt guilty using my longest lens to quickly snap this morning photo. Today, a person would be well-vetted for tolerating 'grab and grin' selfies before getting the job which this man had once held.

Roland Michener served as Canadian Governor General, 1967-1974. At age 84 above, he is returning from his run to the far end of the lake - I think, with a relative. He was famous for his fitness.

Michener was well-known to many of our generation because his tenure began during Canada's centennial year ... when there were many celebratory events requesting an official presence.

He had a long and fascinating career in government and public service which you might find interesting.

... The previous evening, with neither broadcast television reception nor even TV's in the rooms, we ate dinner late, around 2130hr, in the Chateau's fine restaurant. We had never seen the former Governor General in person before but he was immediately recognizable. He was intending to enjoy dinner there. After walking up to the restaurant's reception area with his party, his first request was to speak to the Maître d' .

"He's not here at the moment - I'm the Maître d's assistant, may I help you?", was the friendly and cordial reply.

We found that the Chateau's staff we both very diplomatic and extremely helpful in all our encounters with them.

Just for you, I cobbled this rough panorama together from our discoloured prints. Not all the images were taken on the same day. To the right, you can see the characteristics of one of the Chateau's very few balconies - located only on the circa 1930 wing of the hotel. The fact that we got a balcony is another tribute to the helpfulness of the hotel's staff. 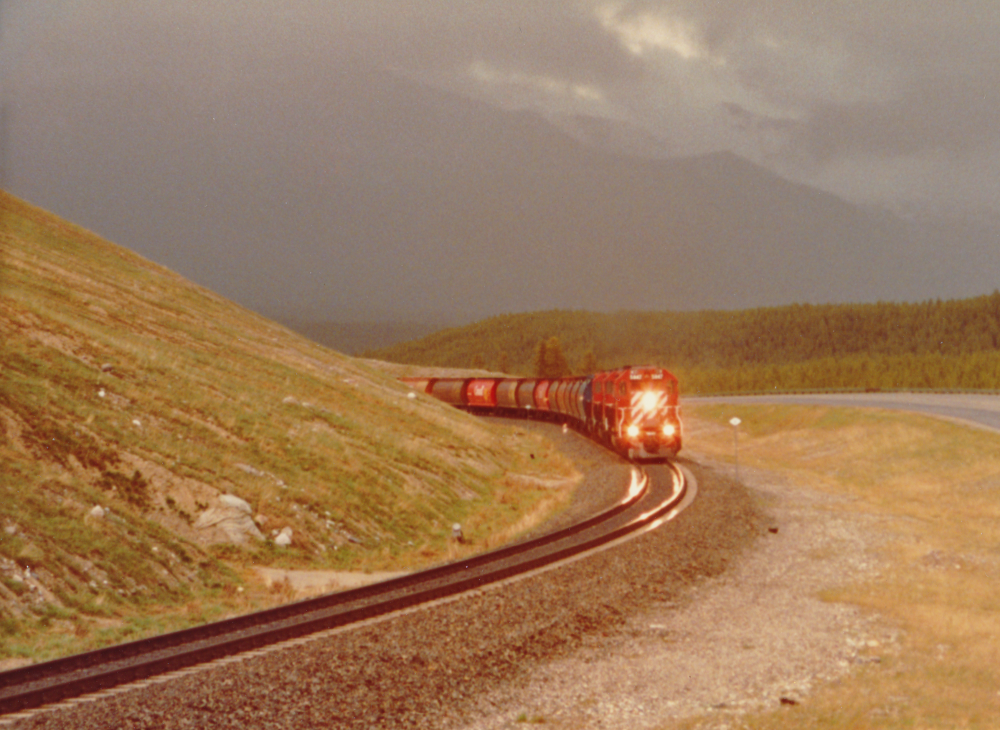 On this particular afternoon, we had followed an intermodal train from Field, almost to the trackside town at CPR 'Lake Louise'. However, we saw a westbound coming up the second 'new' grade  - running between Lake Louise station and the summit.

Obviously there was enough time to get into position for photos. I just checked, and it seems this location no longer offers such convenient access for photography. 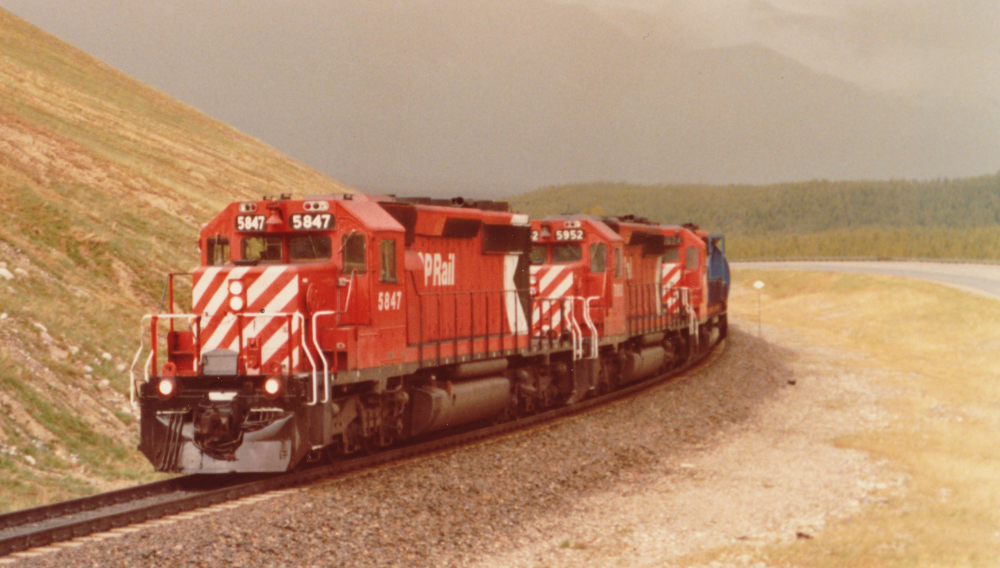 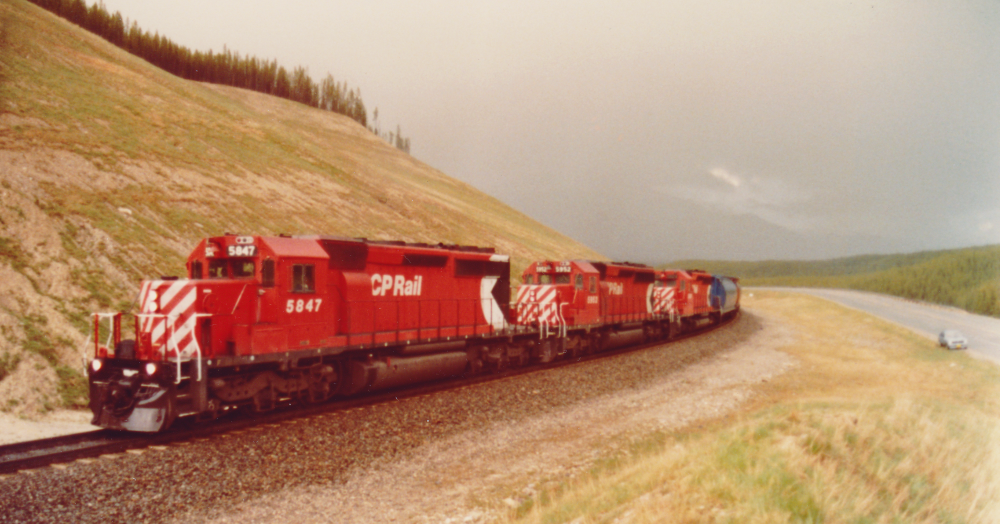 You can see our poor little rental on the shoulder of the Trans-Canada Highway.
(It was obviously 'broken in' on mountain grades and its engine was very 'tired'). 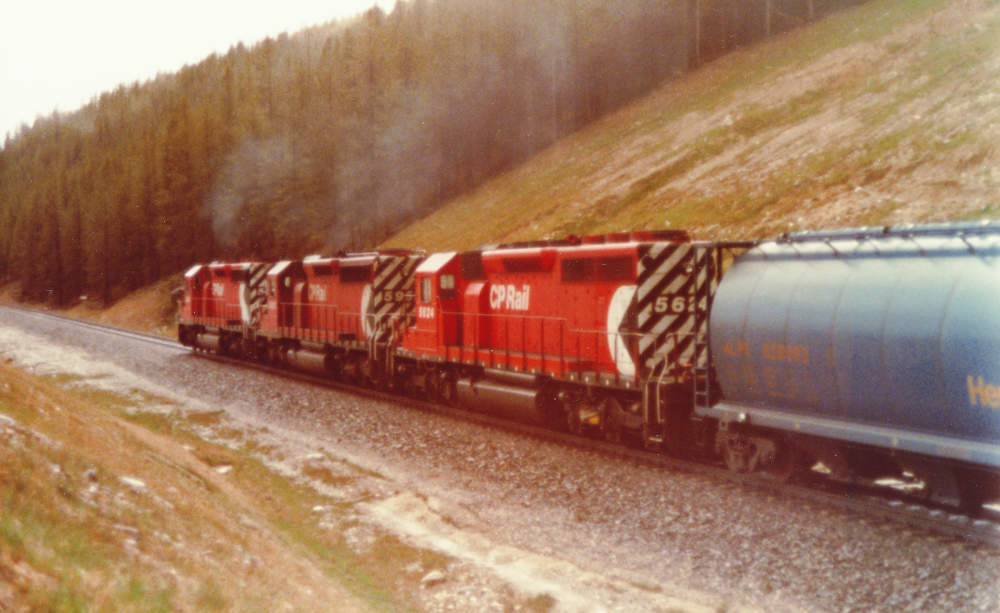 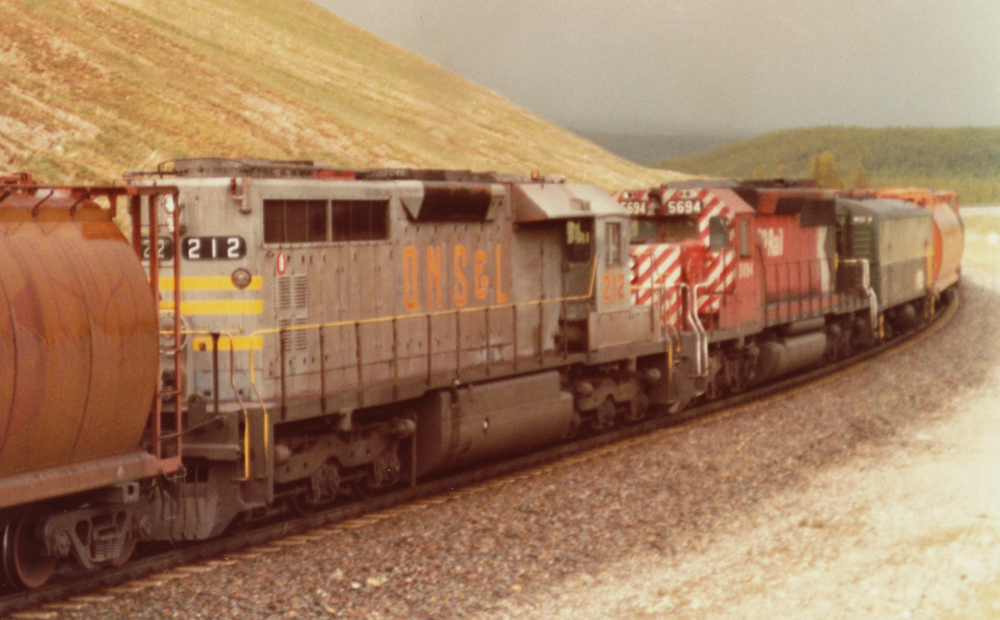 This equipment came as a pleasant surprise. 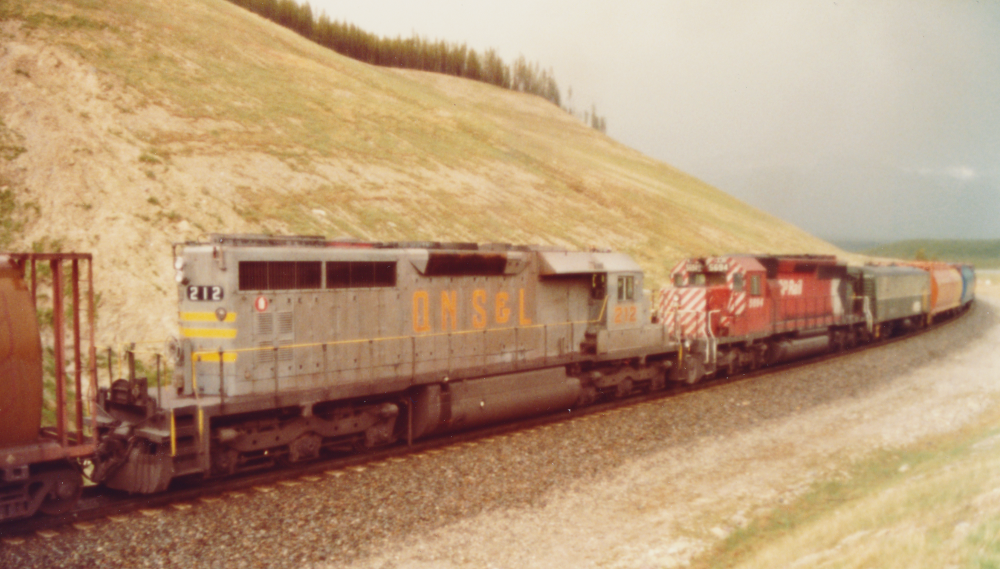 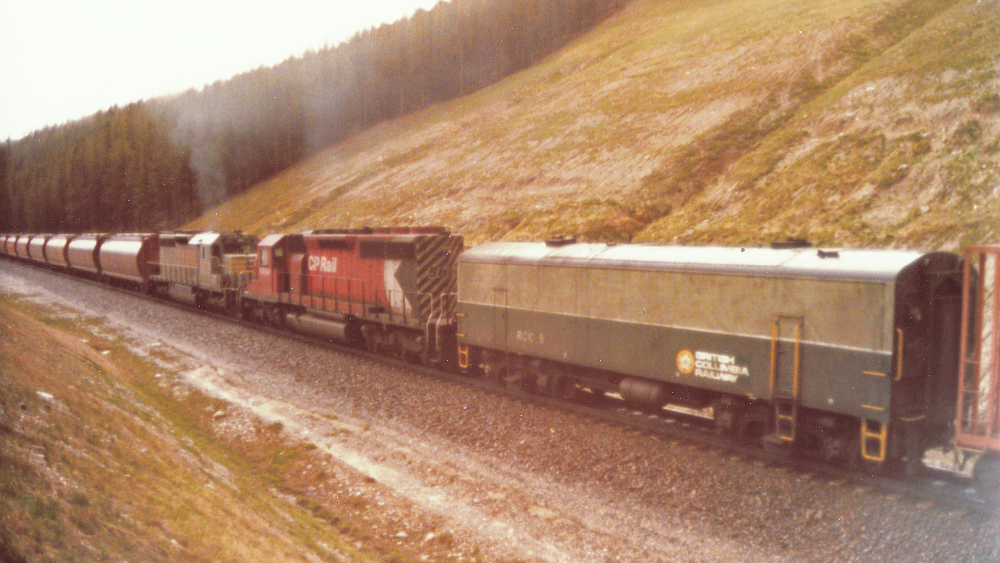 The BCR robot car shell of RCC8 began life as an F3B unit on the Northern Pacific in 1947.
The robot was leased to, later purchased by, CP in the mid-1980s and retired circa 1990. 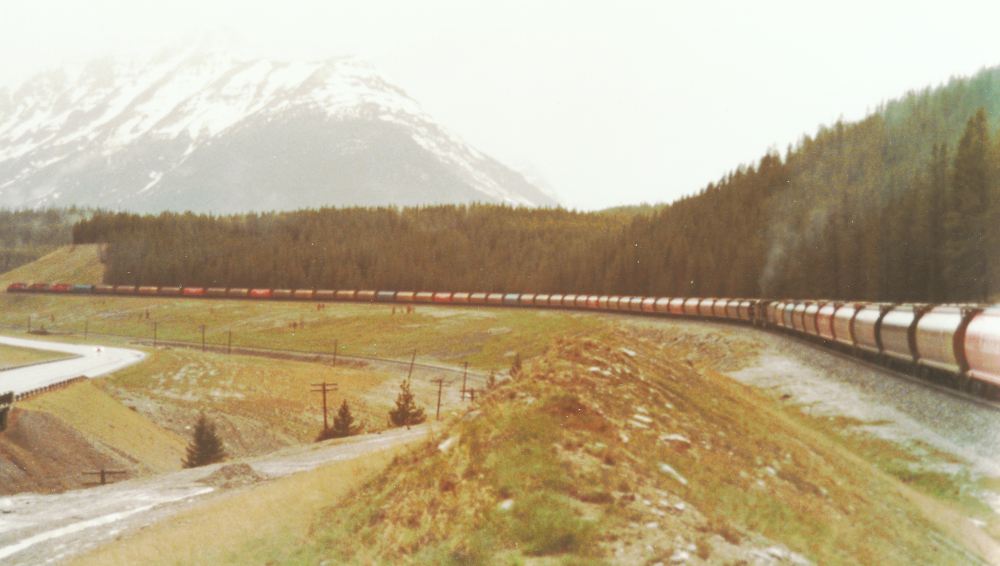 Spending every day of our Lake Louise time chasing trains would not have been healthy, relaxing or profitable.
Some daytime periods are rather quiet.

... As I heard someone say once - as they shook their head and chuckled: 'This happens everyday at this time at every division point on the system' ... i.e. CPR crews are called in for midnight to move freight.

On the trail to The Lakes in the Clouds 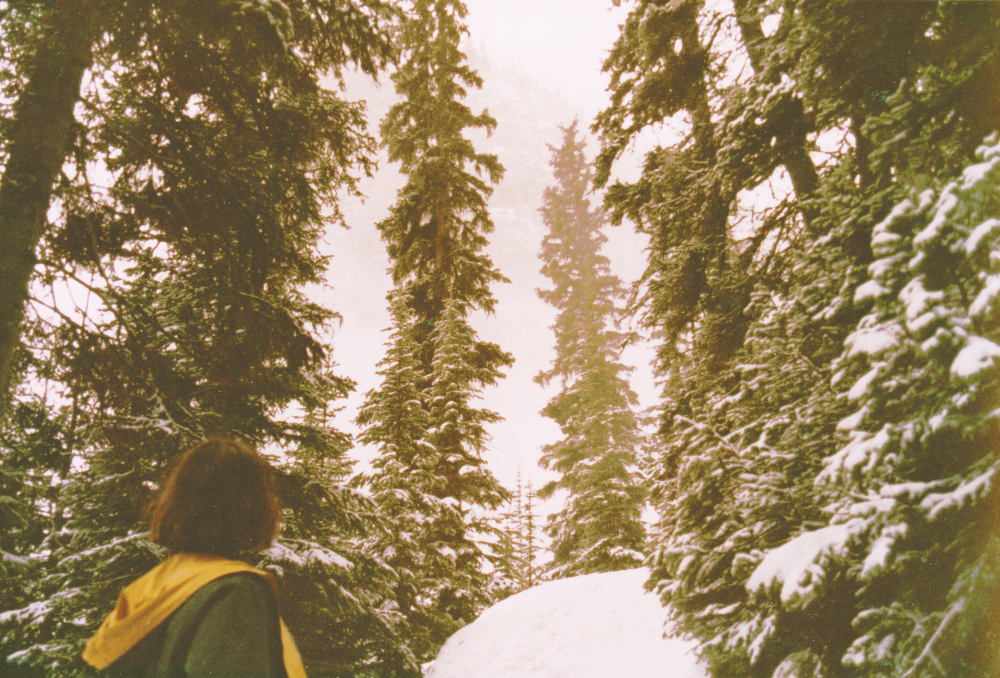 One fine day, we donned all our layers of clothing and our running shoes and decided to walk up the switchbacks to the Lake Agnes Tea Room. Less fortunate people might have lost limbs - either to awakening bears or frostbite - in this pre-cellphone world. But, as you know, people in their 20s are 'invincible'.

In the postcard above: the 'far' end of Lake Louise is at the left margin. There is Mirror Lake. Then Lake Agnes is at the extreme right.

... How many times must visitors have asked weary Lake Agnes Tea House summer staff: 'Pardon me, which is The Big Beehive' ... before somebody addressed that problem head-on?!

To this day, we can't tell you which of these is 'The Devil's Thumb'. 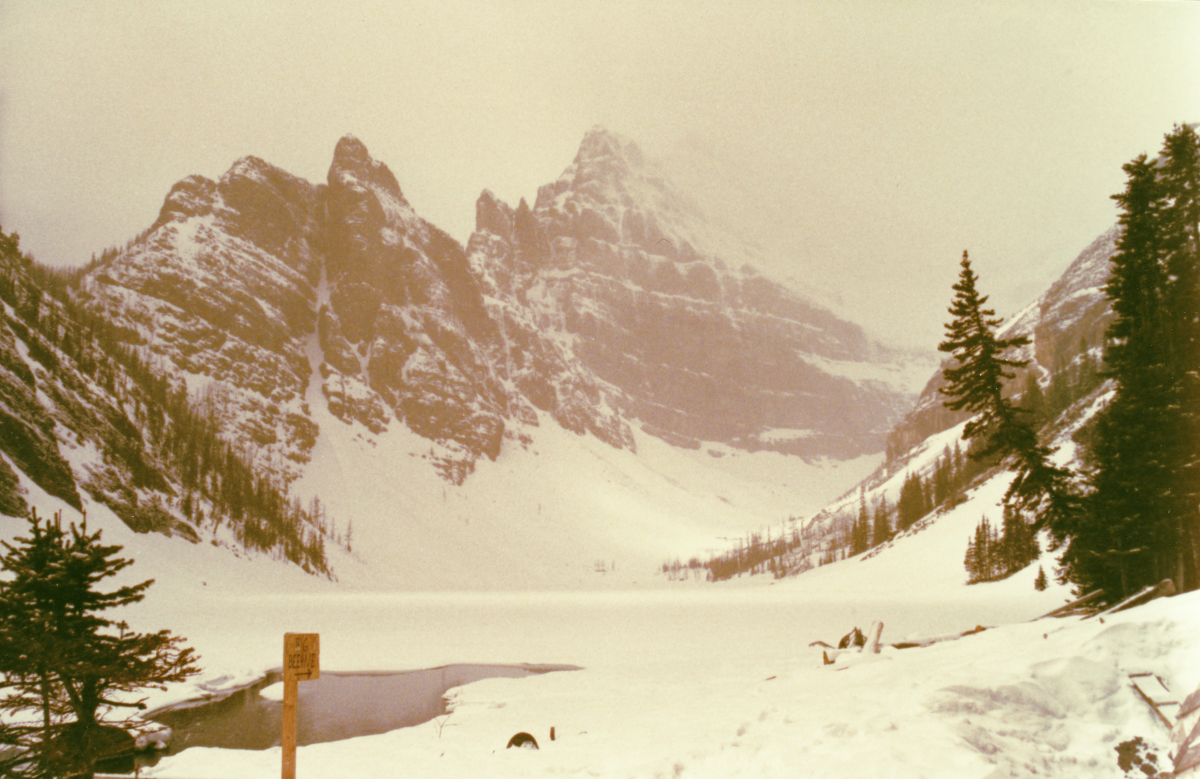 As we arrived, we met a small party of survivors returning from the Tea Room. They told us the attendant inside was getting silverware ready but she would not - NOT - respond to their taps on the door and would therefore never let us in.

Feeling a little (well, a lot) like the party of Major Rogers late in the 1881 season, we began to retrace our steps.

The trip back was easier and sunnier, the farther we went.

On returning to the Chateau, we enjoyed a large amount of food and hot coffee at the ground-level restaurant, overlooking the lake.