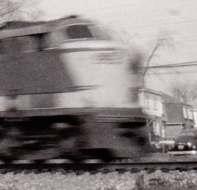 In the process of handling some other documents, I found two large maps from the west end of Montreal which my father had acquired. As they were printed in the 1950s and show elements of railway infrastructure, I decided to reproduce them here in case others are interested in these places during that era.


I have matched up some of my father's railway snapshots with enlargements of relevant map segments. There are a couple of references to local industry and some family historical references as well.


If you have a slower internet connection ... and if you do not have a major interest in Montreal's west island ... you may wish to skip this post.

Here is Montreal Island as drawn by A Jobin in 1834. The Paroisse de Lachine (Parish) extends over the future cities of Lachine and LaSalle. The Sault St Louis was a previous New France name for the Lachine Rapids - you can barely see 'Rapides' labelled at the bottom of the map. The western entrance of the Lachine Canal, the canal route through the future Ville LaSalle, and the eastern end of the canal at Montreal are hi-lited.

Below are some sights to be seen along the Lower Lachine Road - labelled as LaSalle Boulevard on the map. The first postcard was mailed in 1905, the second is undated. 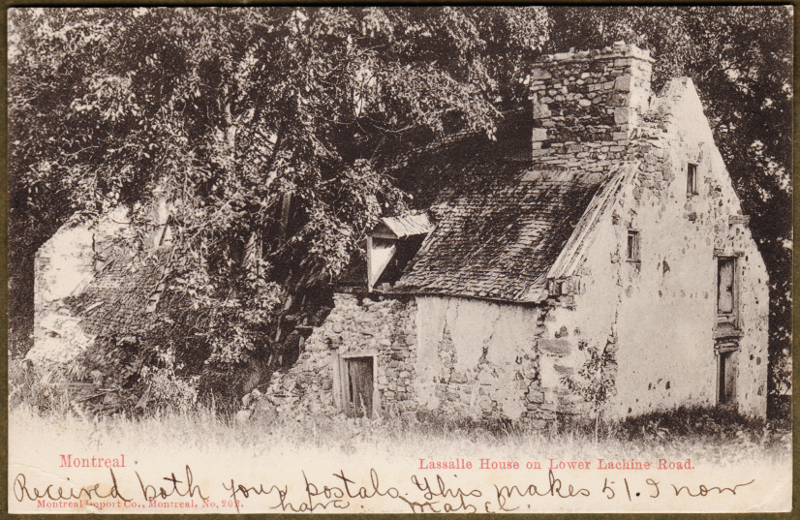 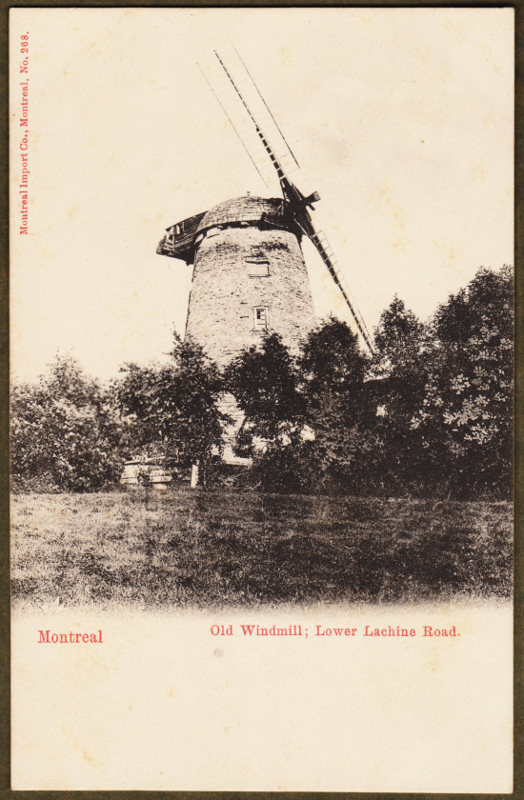 Above: Located at 9681 LaSalle Boulevard today. The CPR line leading to the south shore and thence to the 'Short Line' through Maine is seen above, and is enlarged below. Railway lines also ran along the canal and looped through this industrial area.

The Lachine Canal was built to bypass the Lachine rapids, finally opening in 1825. It was upgraded several times until it was finally replaced by the St Lawrence Seaway. Since the beginning of European settlement, the rapids had been a barrier to shipping inland from Montreal.

On trips to pick up my paternal aunt from her work at the Douglas Hospital in Verdun, we would travel along the rapids on the 'Lower Lachine Road'. On trips into Montreal by MTC bus in the 1960s, the final version of the Lachine Canal and the distinctive canal-side cranes were a regular sight. 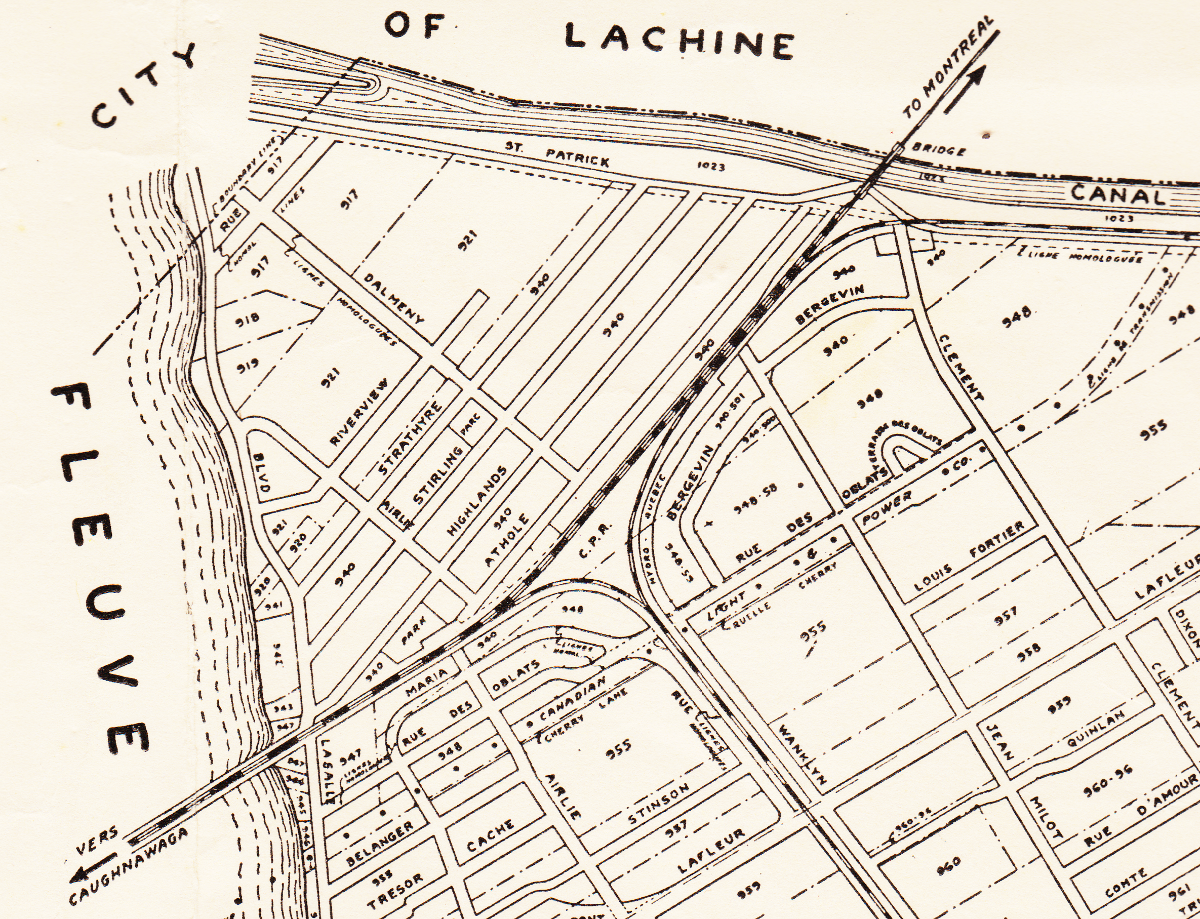 The skeleton of the crane (above) is preserved at the location of 6668 St Patrick Street, Ville LaSalle. It is visible through Google. Canal-side railway lines and the crane are barely visible in this very dark photograph.


The LaSalle Coke Company was involved in the 'carbonization of bituminous coking coals'. It was established in 1928 - just outside the city limits of Montreal.

'All gas distributed in the Montreal district for household and industrial use is manufactured at this plant and is its second most important product.'

'Tar: used chiefly for roofing, wood-preserving, road-building water-proofing and production of electrodes and battery boxes. It is the source of an almost unlimited number of chemicals as well as dyes, plastics and insecticides.

'Ammonium Sulphate: the source of nitrogen in most fertilizers.

'Benzol: one of the raw materials from which synthetic rubber is made. It is also used in the production of aviation gasoline and for blending with ordinary gasoline to make anti-knock motor fuel.

'Toluol: the base from which TNT is made.'

As well as being used in metal refining processes, the smokeless quality of coke as a heating fuel was desirable in urban areas when money was no object. Caboose stoves often used coke - perhaps, in part, because stove pipes would be kept cleaner, reducing the danger of chimney fires. 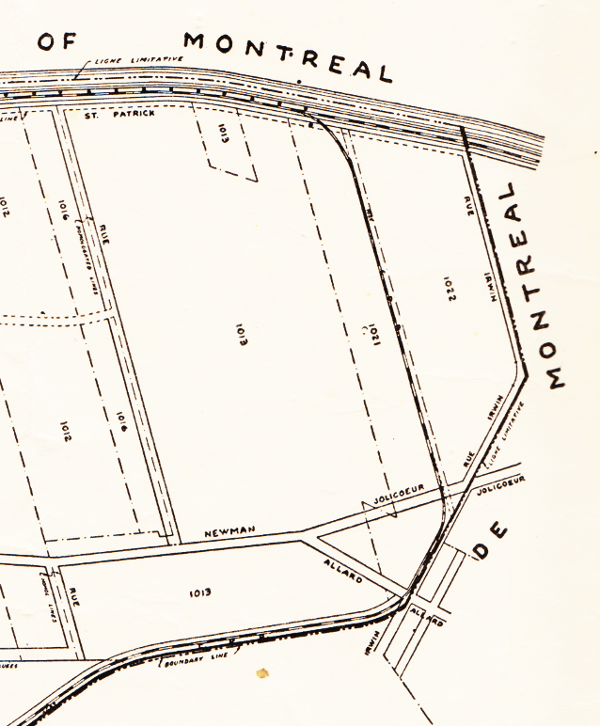 The LaSalle Coke Company occupied the parcel of land shown above (and below in broader context). The East End of the Lachine Canal


The Lachine Canal terminated at the Port of Montreal.
The view above is circa 1948, and shows the small canal boats used before the St Lawrence Seaway was built. The map above is 28 inches by 18 inches in size and required about ten passes on the scanner to reproduce it in sufficient detail.

Below, images are shown with enlarged segments from this map . There are excellent fire insurance plans and other resources at the following location if you want to further explore the local geography. I have not linked the logo below.

The Montreal and Lachine Railroad 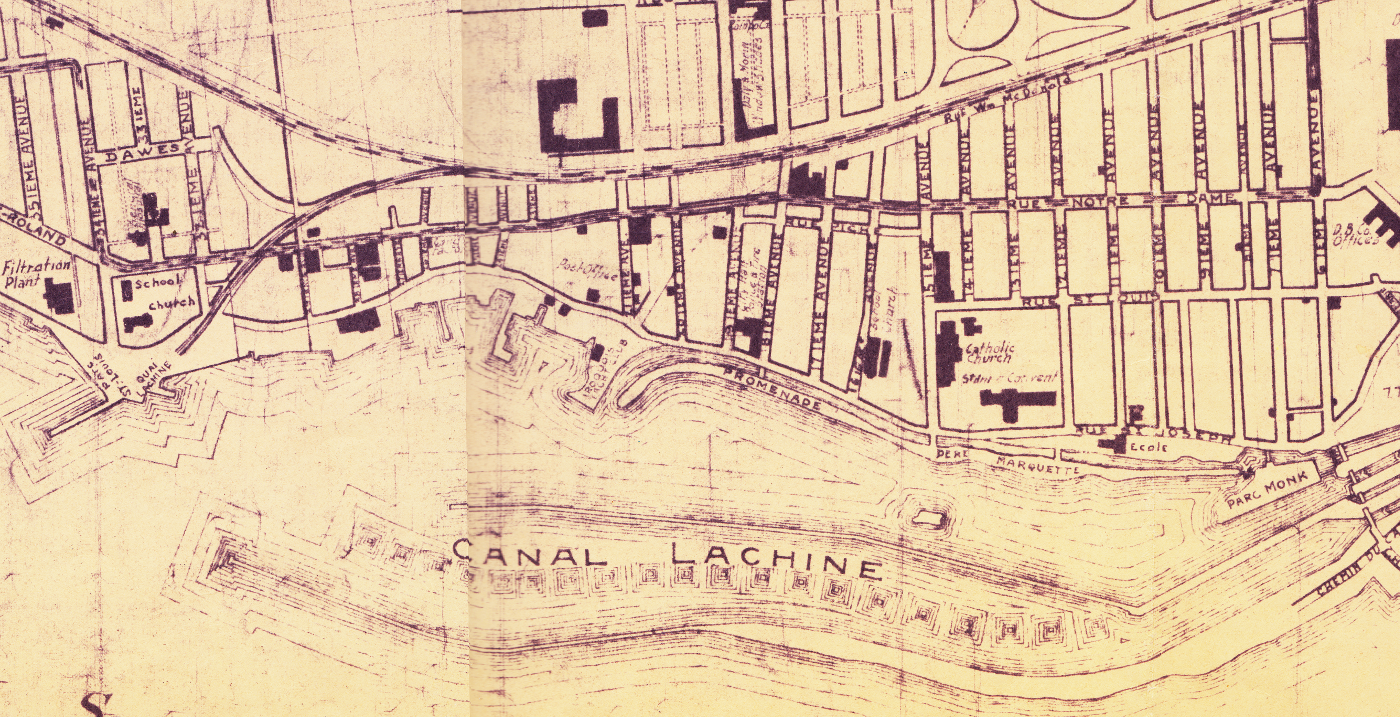 Operating between the location of the Bonaventure (Street) Station in Montreal and the western end of the Lachine Rapids, the Montreal and Lachine Railroad (sic) was typical of some very early Canadian systems - opened in 1847, it was a 'portage railway' (connecting shipping routes which handled freight and passengers). At the Quai Lachine, above, you can see the Canadian National Railways wharf spur.

The first effort at building a canal is enclosed by the Promenade Pere Marquette.

At the Iroquois Yacht Club you can just make out a parallel track-like curve to that wharf. This was the original water-side terminal of the Montreal and Lachine Railroad.

Before the Victoria Bridge, entire passenger trains were car-ferried across the St Lawrence River for furtherance to the bright lights of New York City, etc. I studied this issue to bits at this link:

Detail for family members checking in:

* The barely-visible church near the waterfront - west of 15th Avenue - was the 'little Scottish Church' erected by 'the fur traders' which my maternal grandparents, and subsequently our family, attended.

* My maternal grandfather worked at Stelco (on the previous map segment) and his family lived nearby. 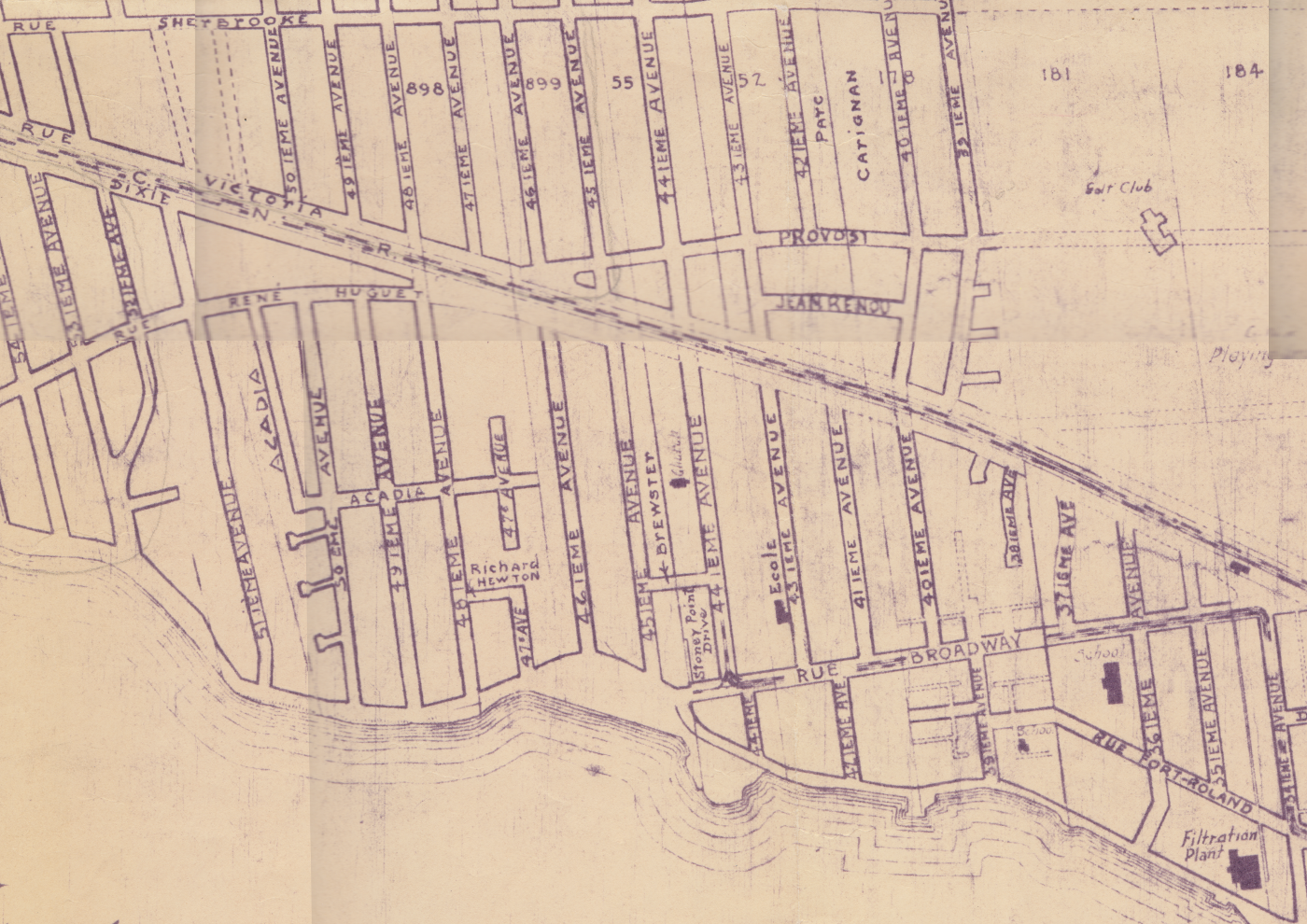 Above, in the west end of Lachine (a more anglophone area of Lachine in the 1960s) there are a few local features of note:

Montreal's streetcar system runs up 34th Avenue and turns west near the CNR Lachine station building shown on the south side of the tracks. A streetcar wye is shown at Broadway and 44th Avenue.

Jean Renou Street is named after one of the real estate developers of western Lachine. At one point my family rented a townhouse from him. One of Mr Renou's relatives, living on Canada's west coast, indicated that he donated the land for Carignan Park - much of our unassigned childhood was spent there.

The following CNR snapshots were taken in the general area of 48th Avenue, Rene Huguet and Victoria ... 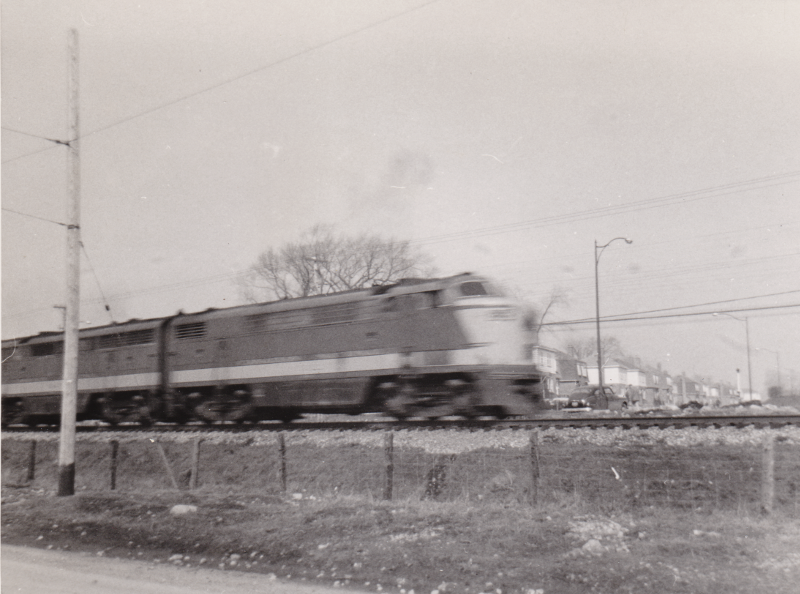 Eastbound CNR freight at 45th Avenue and Rene Huguet, Lachine, March 1958.
(I think the shutter speed of the 'point and shoot' camera was around 1/60th of a second.) 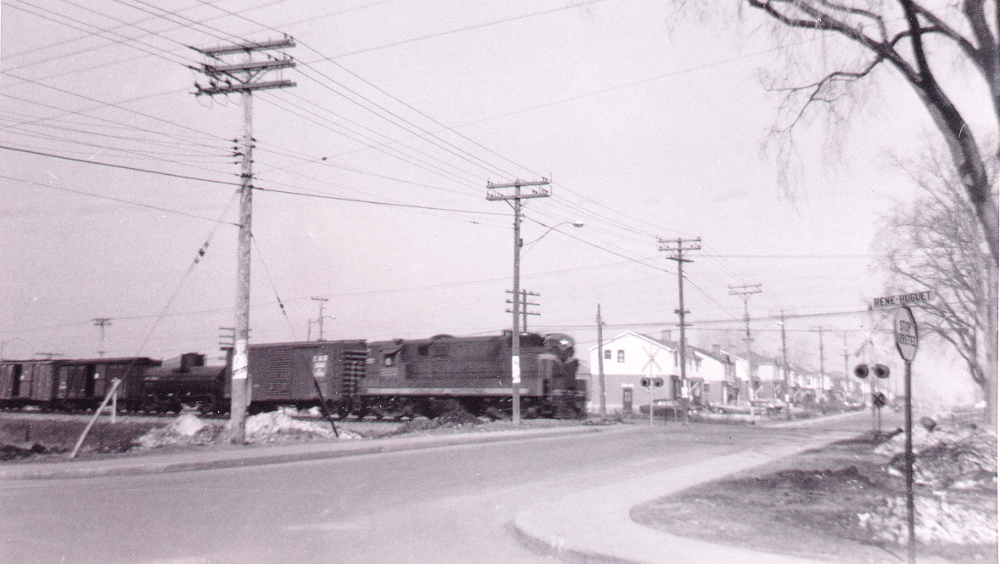 Eastbound local freight with 2203 at 48th Avenue at Rene Huguet, Lachine, March 1958. The crossbuck is bilingual and there is a pedestrian-level sign as well. Behind the photographer is Summerlea School - one of two English, Protestant elementary schools within a few blocks. The other (Meadowbrook) is beyond the second wooden boxcar and located on the other side of the CNR main line. 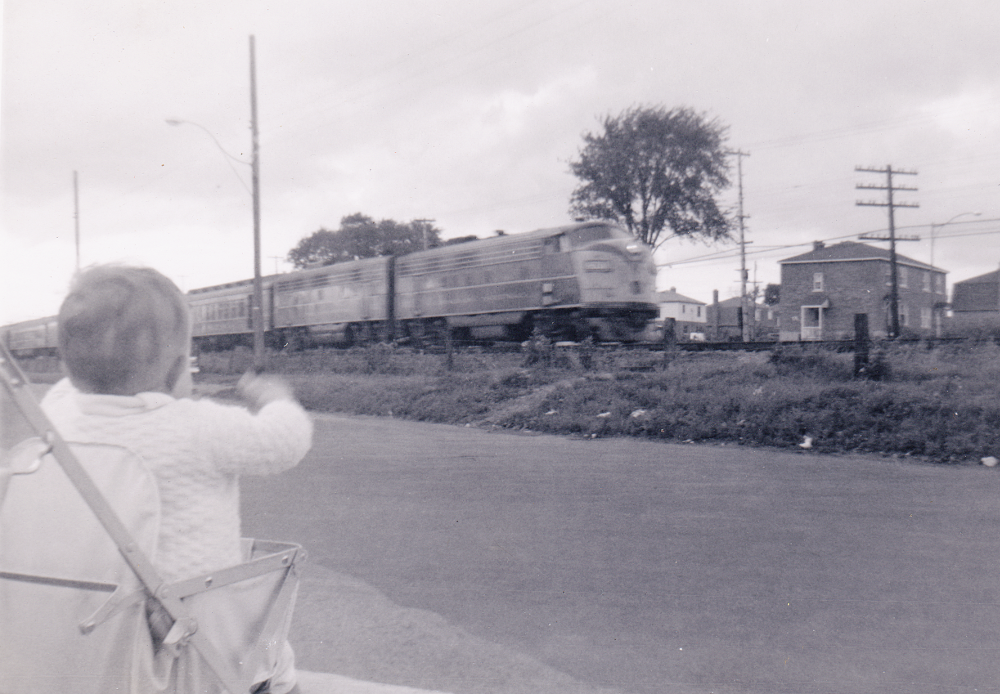 CNR westbound passenger near 48th Avenue at Rene Huguet, Lachine, May 1960.
After the roadbed was removed and developed for houses,
it was on almost exactly this spot where CPR Corporate Historian Omer Lavallee lived.

Photos of the CPR Line at 48th Avenue 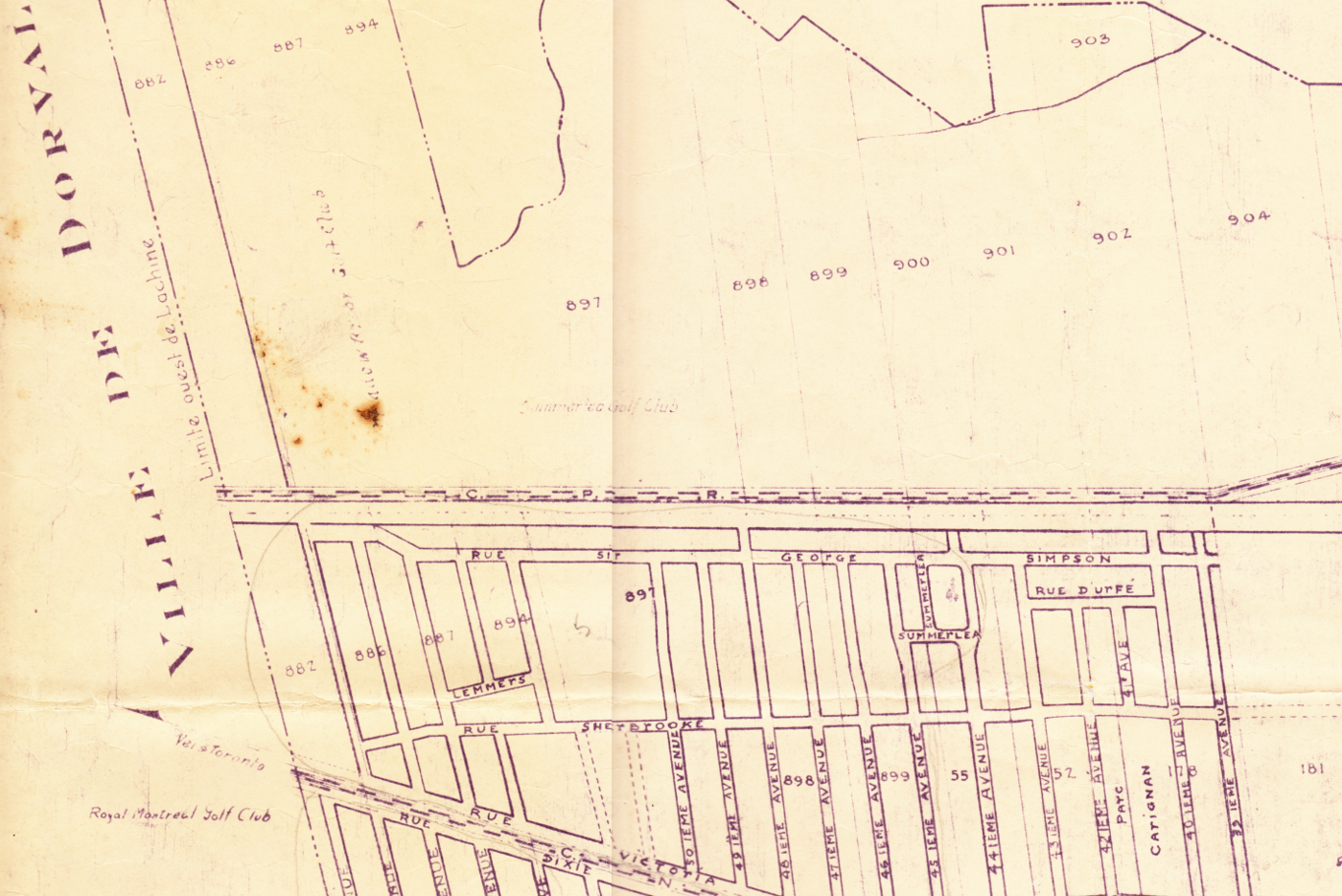 In the map above, you can see that 48th Avenue also extended north to the highway (then, the Metropolitain Boulevard - today Autoroute 20). The CPR ran just north of the highway ... before the CNR built the CPR a new roadbed immediately to the north ... and relocated its old main line through Lachine to its new location between the CPR and the highway ... i.e. on the old CPR roadbed.

Around Lachine's western boundary, you can see three golf courses: Royal Montreal - with its famous CNR 'Dixie' station, the scene of many CNR equipment photos; and Meadowbrook and Summerlea - which supplied names to the elementary schools mentioned above.

Studying the map, you will see that 55th, 48th and 40th Avenues provided access to the highway. Sir George Simpson (Street) was one of the Scottish fur traders mentioned earlier. 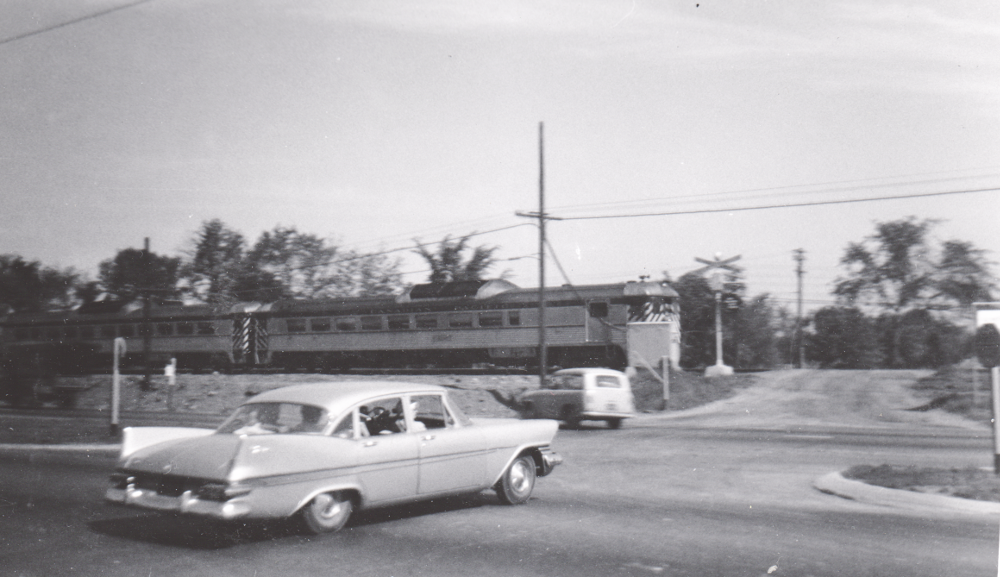 Here's what the access to the four-lane highway looked like. This was the main highway connecting Montreal and Toronto and there are no traffic lights at this point. This photo was taken just before Quebec's autoroute building boom began to modernize the road system with controlled access freeways ... the famous Echangeur Turcot becoming one of the highest expressions of this modernization in the 1960s. In the latter's shadow, in the 1990s, my father and I located and photographed the location of the old Turcot roundhouse we had known.

The Dayliners, above, were likely a mid-day commuter train heading for Windsor Station. You can see a genuine 'wig-wag' road crossing signal at the level crossing which takes motorists over the CPR to the Summerlea Golf Course.


To the right, a car is entering the eastbound highway from the Summerlea level crossing ... or is in the process of executing a U-turn. To add extra danger and excitement to this photo, let's agree that the pickup truck is carrying cylinders of compressed gas. 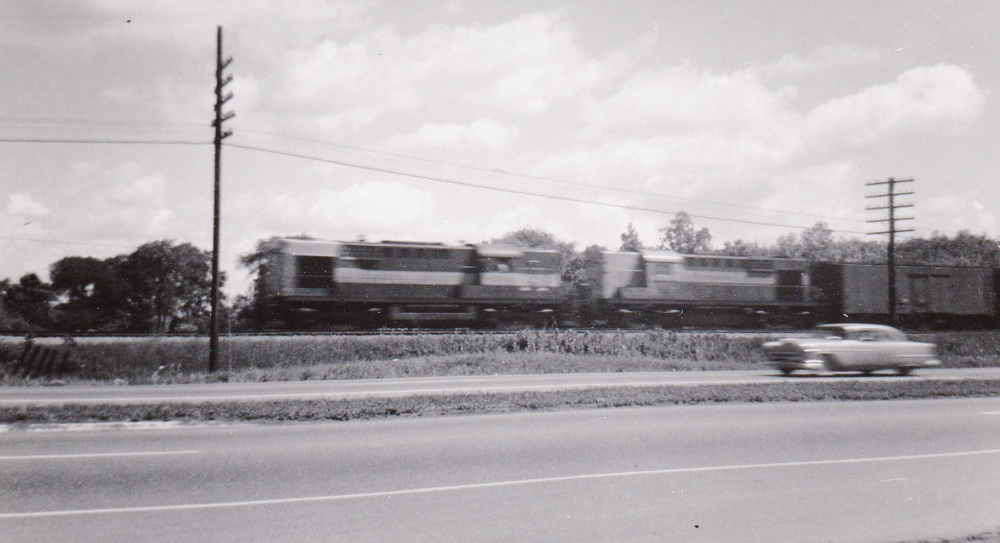 
The photo above looks to the north.

On the map below:
The track lead along the west side of the CNR yard originates at the wye south of the CPR overpass. 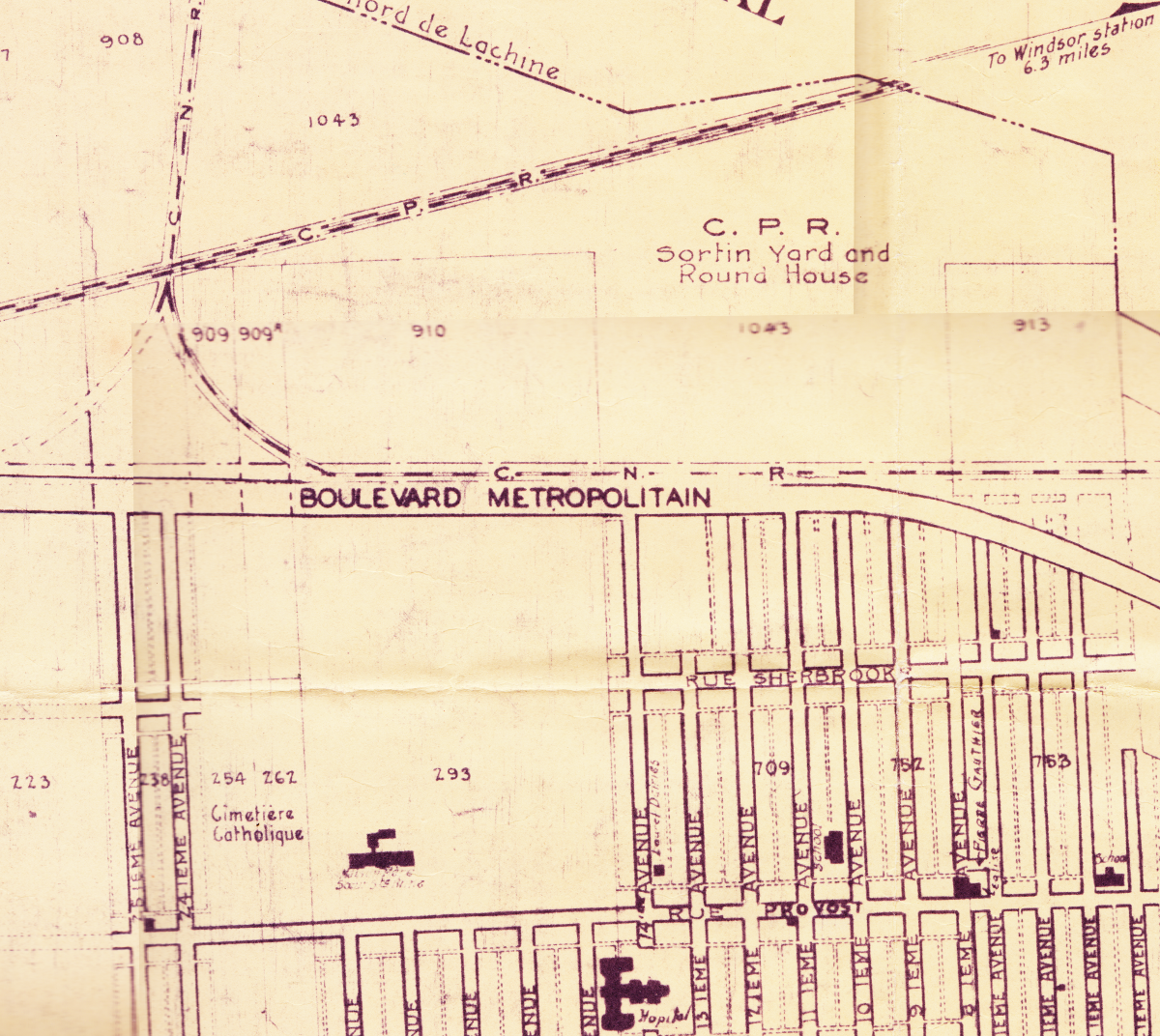 Family members looking in: The school just north of Provost on 10th Avenue is Central Park School (elementary, English, Protestant). My paternal grandfather was principal there for many years, and my mother attended school there.