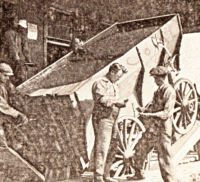 Currently being a little bogged down in a post with more moving parts, I thought this would finally be a good time to post some images from a very worn and defaced textbook my father used as a child in the 1930s.

Both of my father's parents were in the 'family business' of education in Quebec and mainly in Montreal, as was my father. His sister became a nurse and had a very broad range of health care experiences.

As this is being posted, kids are looking forward to - or dreading (my approach) - their imminent return to school in 2016. About century ago, my grandfather would have been in preparation for teaching some of his first classes.

The source for this post is actually a geography text from 1925. Considering the rural/urban population distribution of North America back then, it seems appropriate that there are so many illustrations of agriculture in the west and the export of grain. Train images are scarce, however.

... Bringing more family into this piece, my uncle from Portage la Prairie was recently involved with a threshing record at the Manitoba Agricultural Museum at Austin - using the same general type of equipment seen in the following illustrations  - 140 threshing machines built between 1887 and 1953 were used to set the record in July 2016.

Although Canadian grains today are generally bred to mature sooner and are Roundup-harvested early ... we could imagine the harvest operations shown in the images with the circa 1900-1920 cultivars which farmers were hoping to get in before they became frost-damaged.

I have included a few key pages of text ... they explain the book better and they also provide some interesting historical detail about the population of Canada's and the world's urban centres during that era. 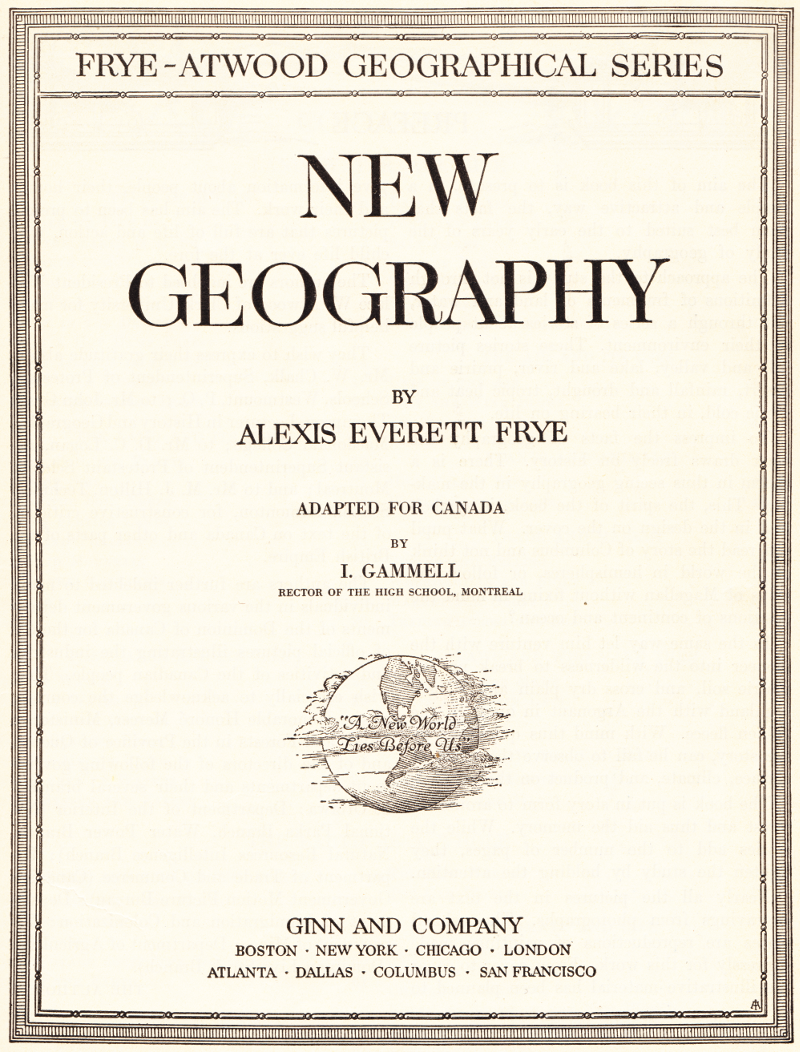 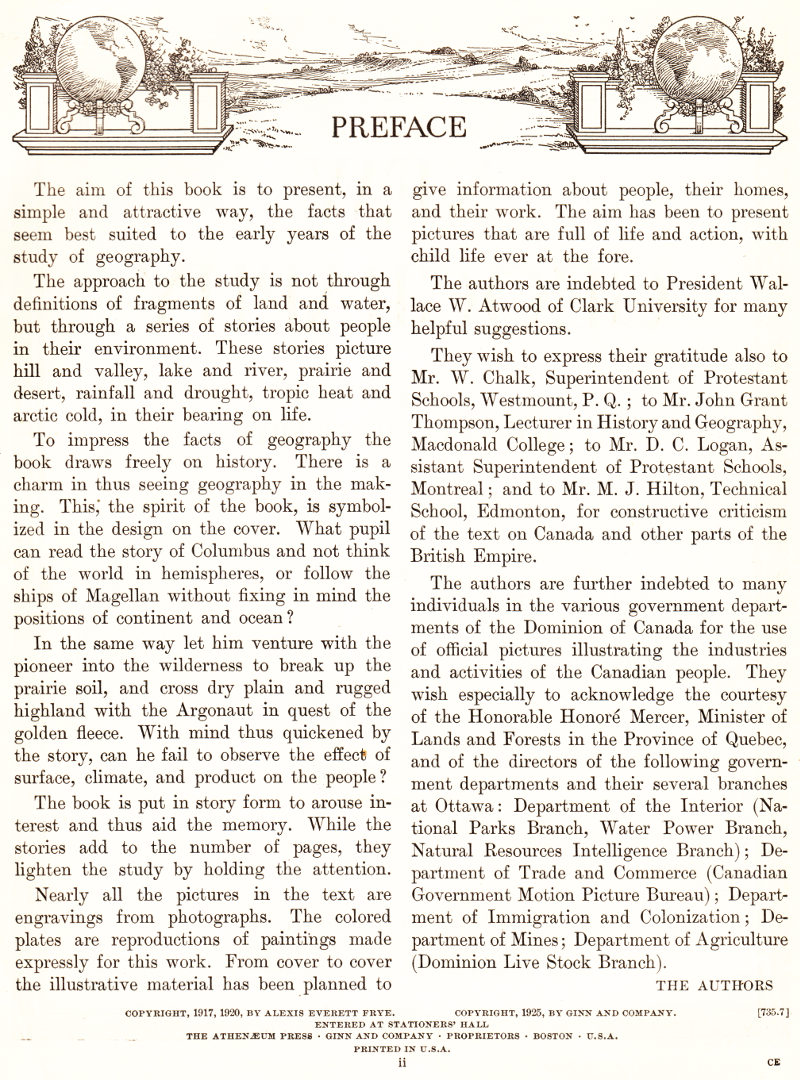 This text is adapted for Canadian students from the original American version. Other editions of this same book, from around this era, can be seen at archive.org .

The original images in the book are usually only a couple of inches in size. In enlarging them, the dithering, engraving details, etc are made a little more pronounced. I have avoided the temptation to blur the pixels so the characteristics of the original 'artifact' come through. 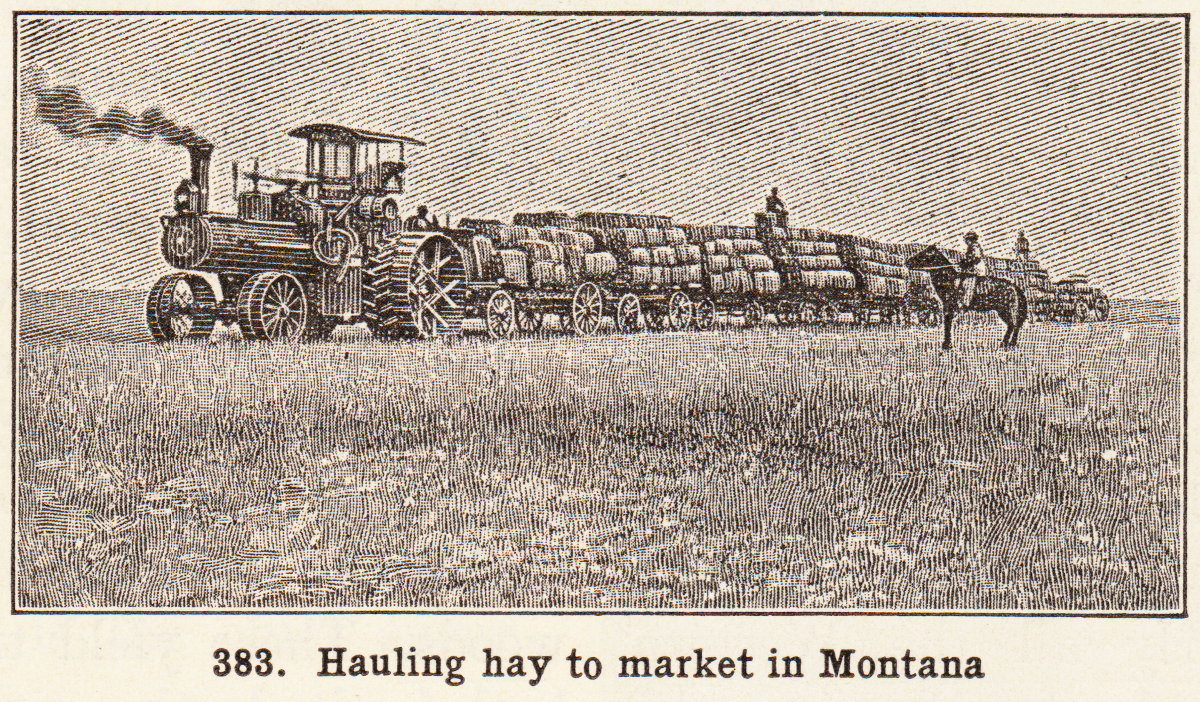 The topography often lent itself to the cross-country transportation of crops and contract harvesting equipment. 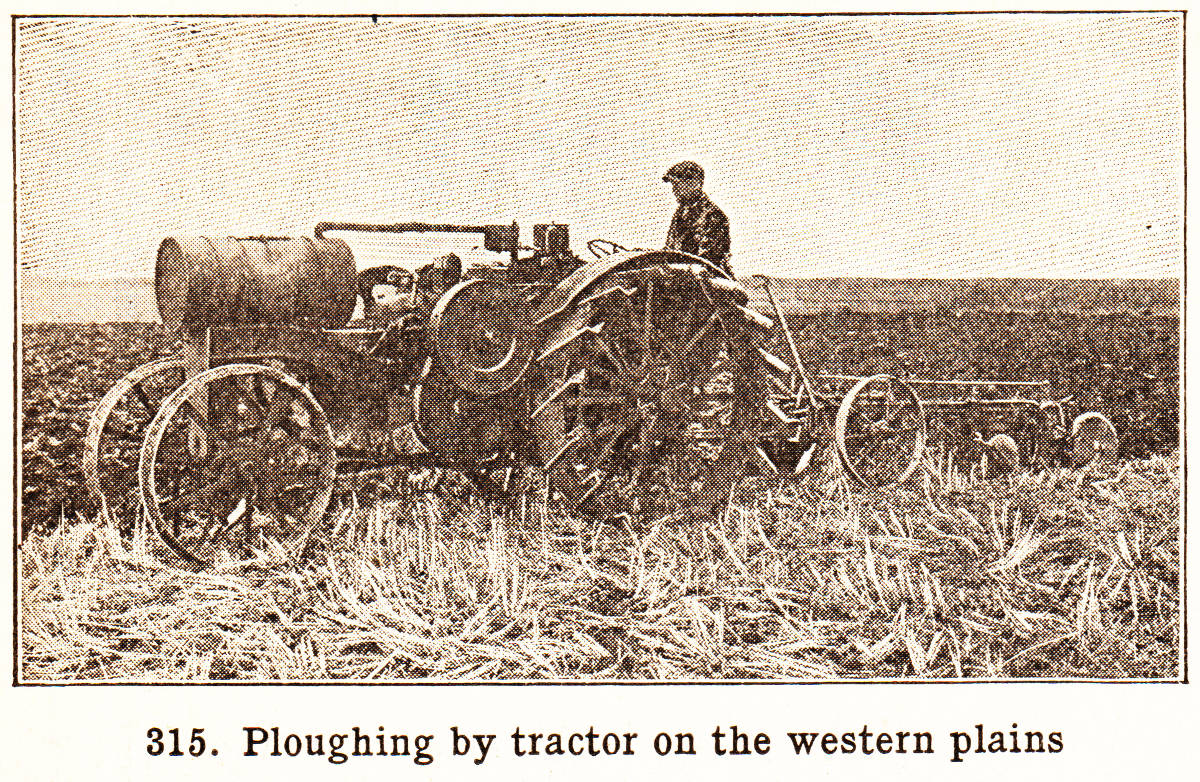 This almost looks like a hot bulb, 'hit and miss' engine - similar to those used to power early grain elevators. 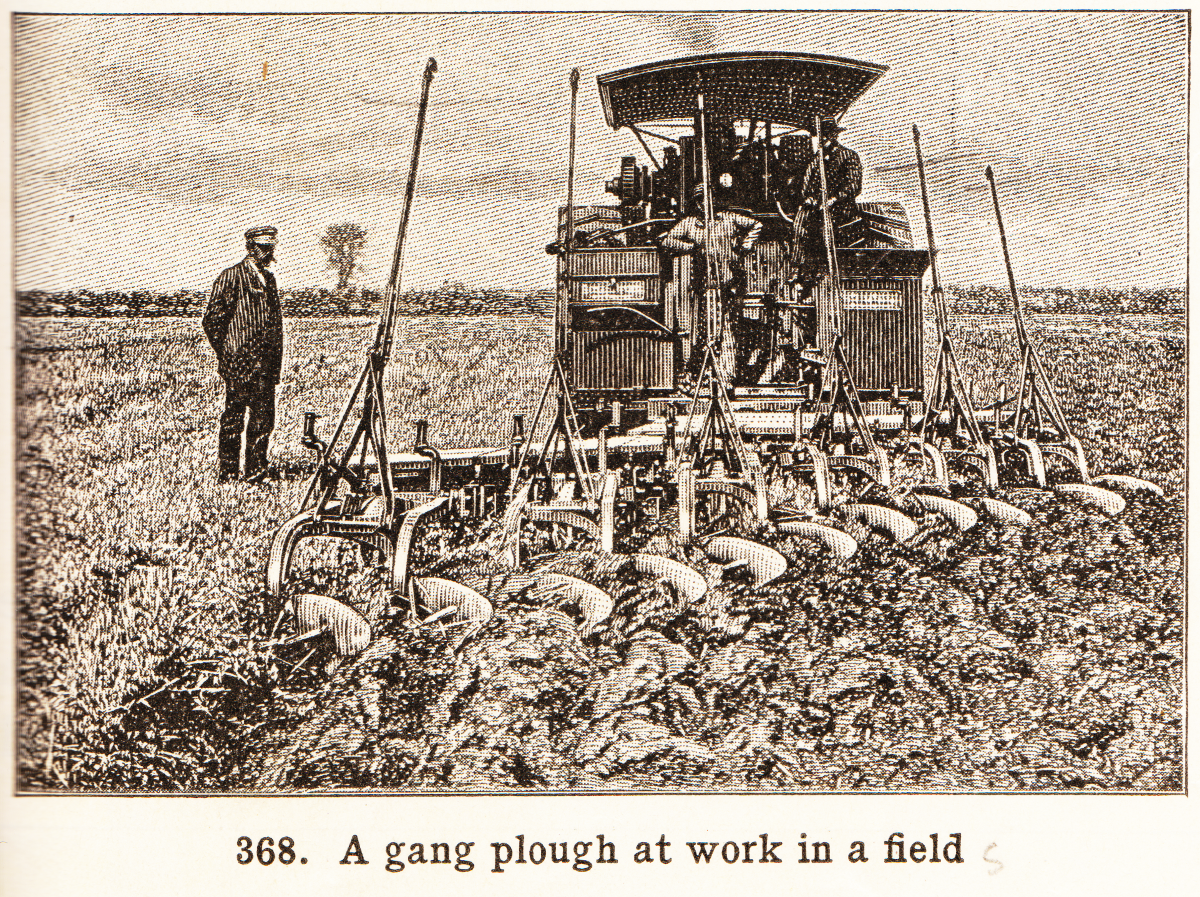 This placeholder represents seeding and the growing season.
(Apparently these were too boring to show to school kids.) 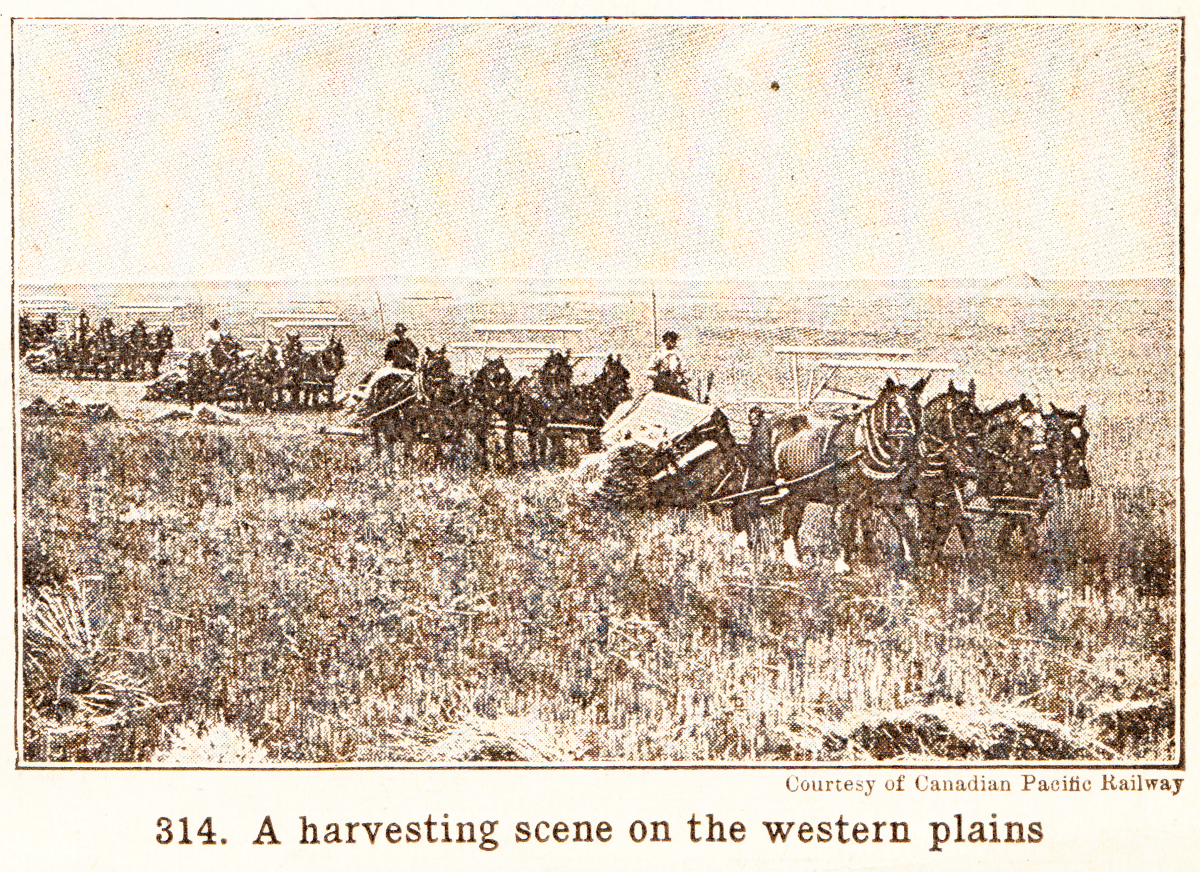 A gang of horse-drawn binders are cutting the mature grain stalks and binding them into sheaves.
In this book, vertical lines on a horse's body usually represent a light-coloured horse - not underfeeding. 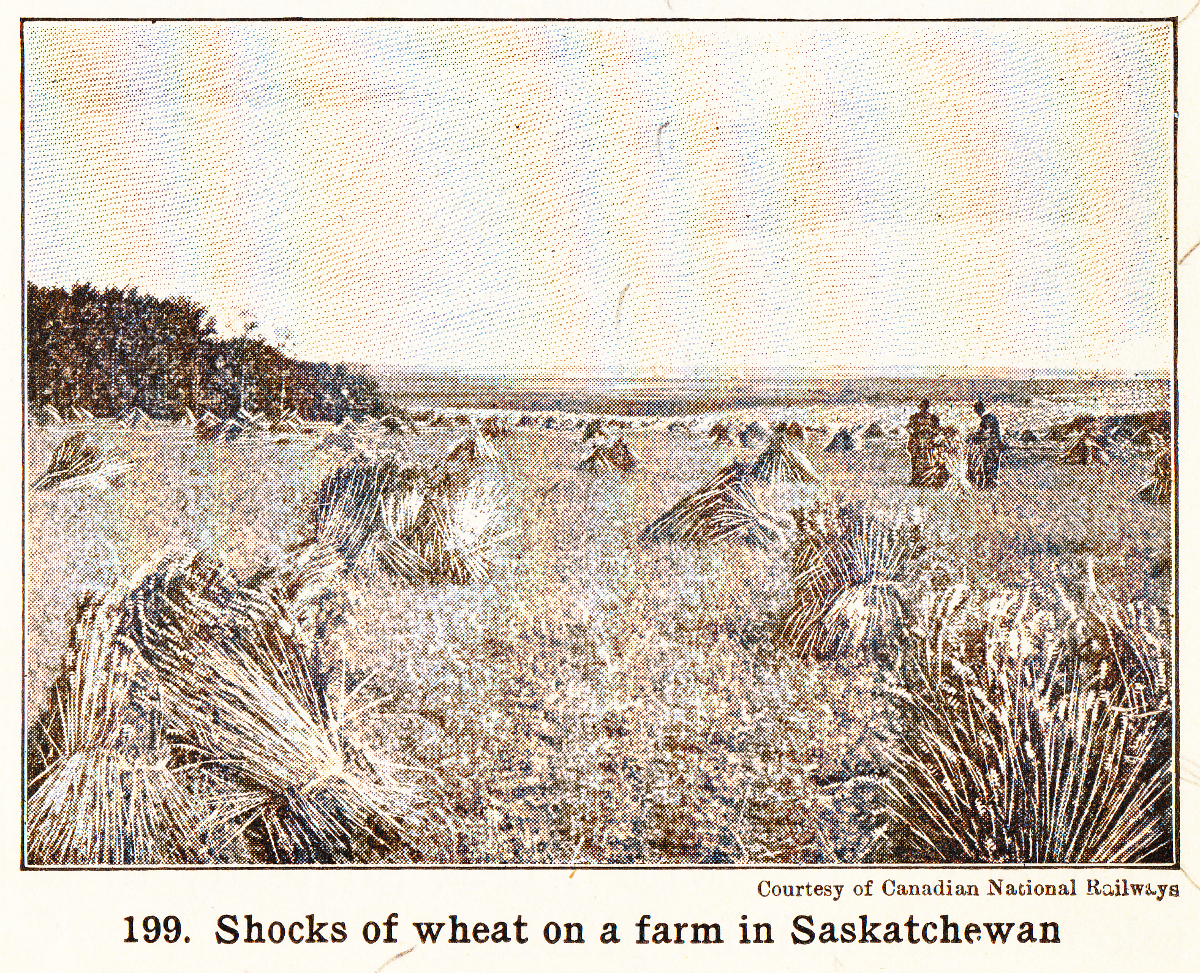 The sheaves of wheat are propped against each other to form a stook ... with the grain end in the air to protect it from ground moisture ... more specifically, from: rot, molds and fungi. Ground-level rodents are likely to get their fill from the lost grain seeds they can access on the ground - so there is a degree of rodent protection as well.

The process of threshing - striking the grain stalk to separate the grain seed from the stalk, and also the proverbial chaff - requires grain plants of low moisture content. Broken up bits of the grain flower and the shattered hollow and dried grain stem tend to be lighter than the grain seed itself ... and traditional winnowing ... and modern threshing machinery ... used these physical characteristics to achieve the separation of the grain. 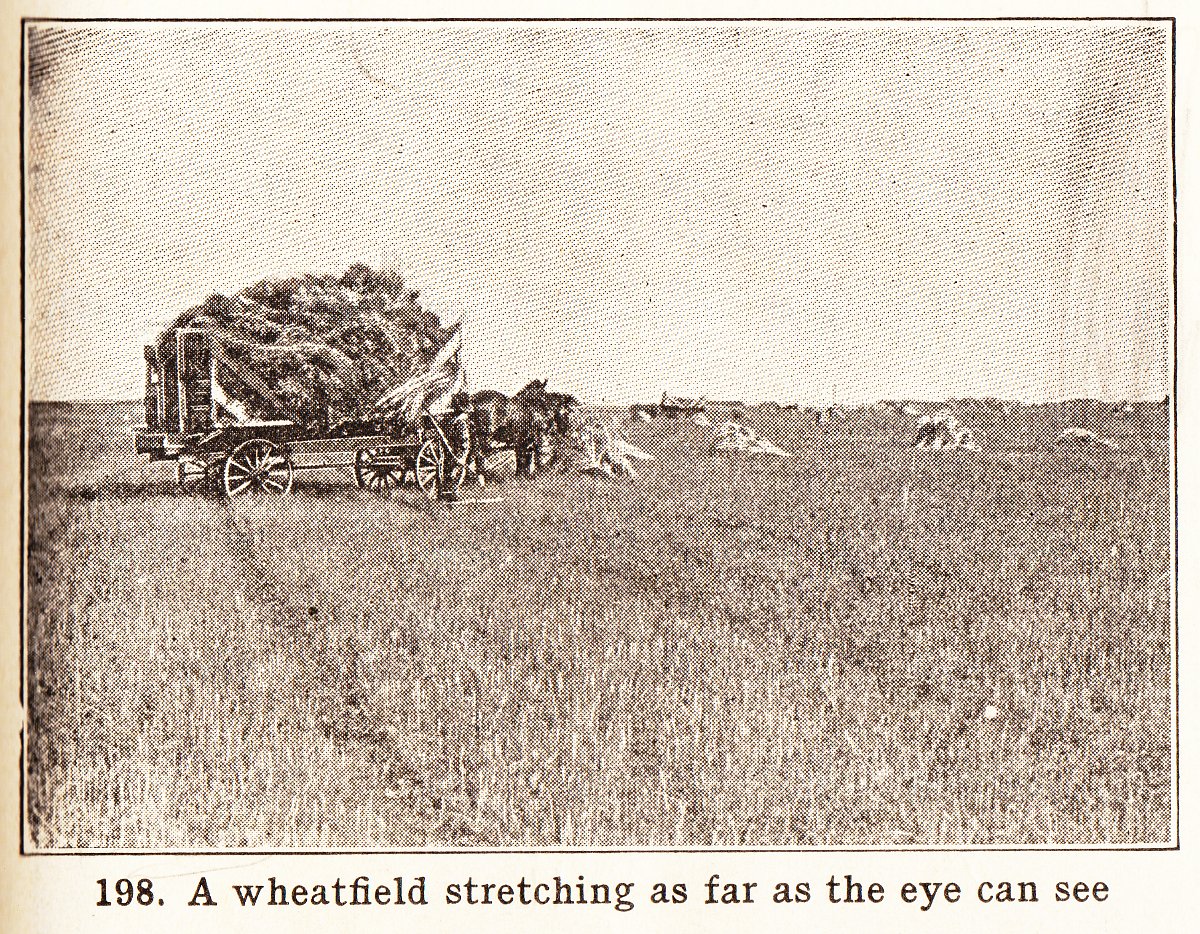 You can understand why the railways, during this era, ran 'harvest specials' in the fall to take unskilled and semi-skilled labourers west to help with the harvest. There was a lot of sheave-handling to be done.

In contrast, a modern 'combine harvester' cuts and threshes the dried plant stalks as it makes a single pass over the plants. An auger on the combine transfers the grain to a truck for hauling to an elevator for storage. 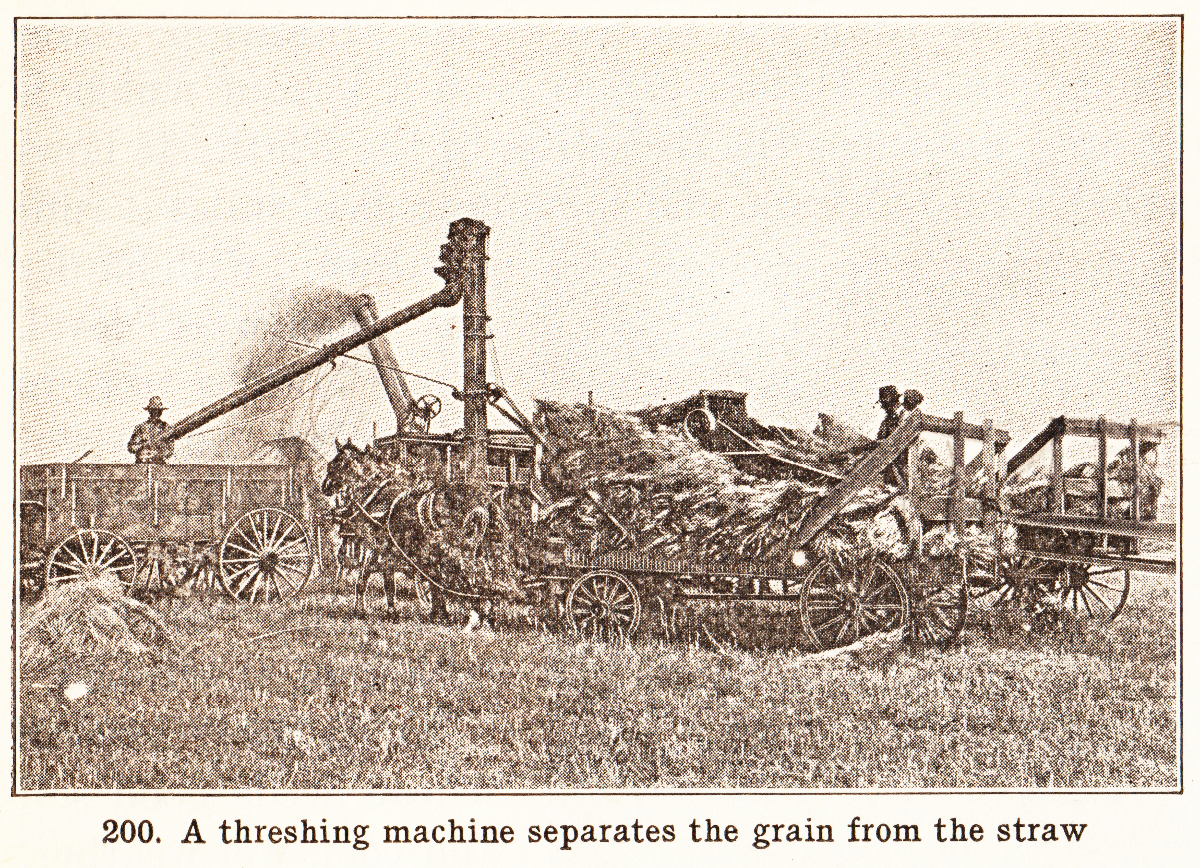 At the threshing machine, the gathered sheaves are fed into the machine's conveyor.

In eastern Canada, a horse on a treadmill might power the threshing machinery.

In western Canada, with so much grain to be processed, usually a steam tractor transferring its power via a large belt, powered the thresher.

Here, the grain is augered to a worker on the wagon at the left - who bags it. The straw and chaff is put into a pile on the ground.

At the steam tractor, a horse-drawn water tank is used to fill the boiler with water. For fuel, steam tractors were omnivorous - in an ecologically virtuous cycle, they could burn waste straw, if desired.

You can see the long belt transferring power to the thresher.

Although people probably ate more oatmeal/porridge then, oats were fed to cattle, but they were particularly important for fueling horses in both the country and the city. 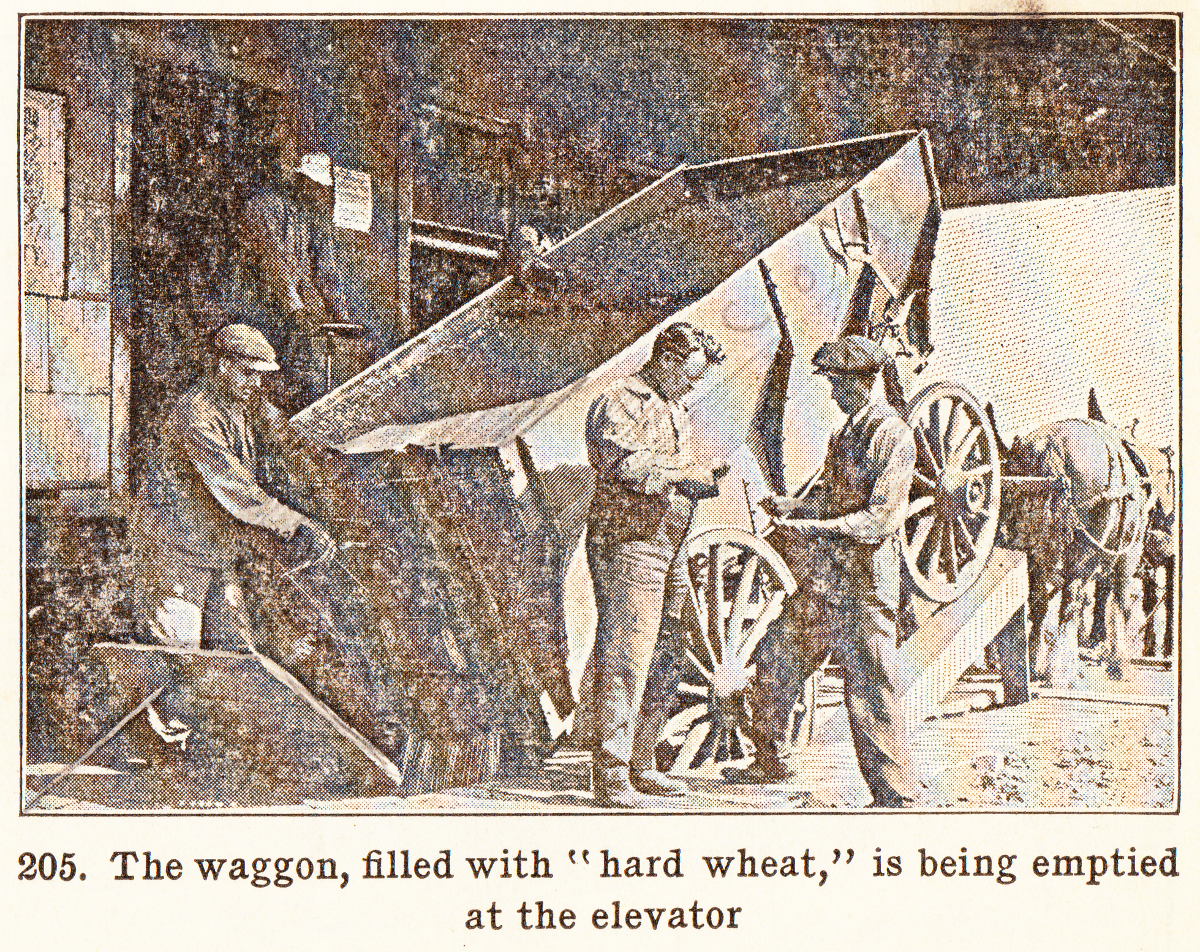 The wheat is being dumped, weighed and graded.
Large wheat seeds, undamaged by frost, rot and plant parasites were more valuable. 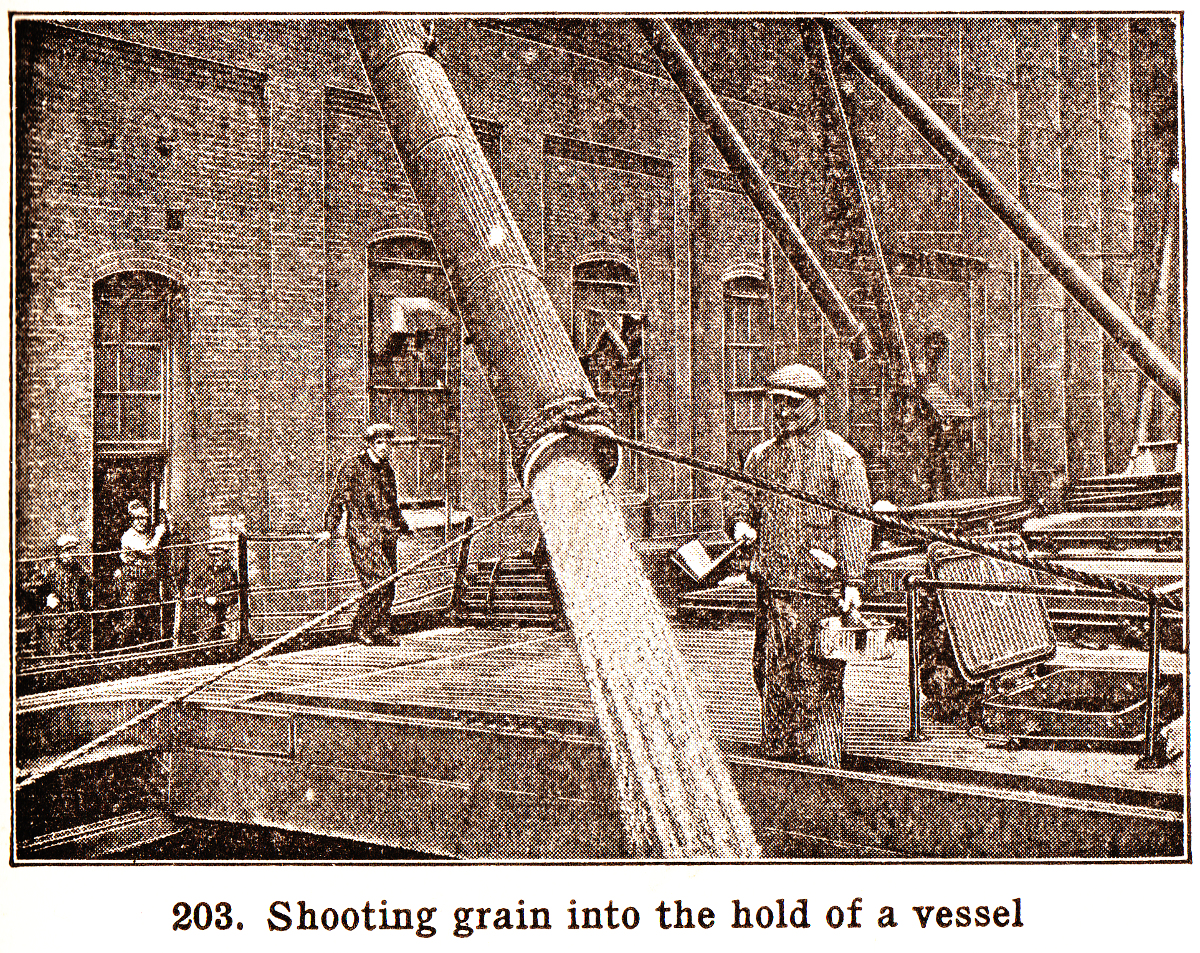 Wheat from each rail car was sampled and officially graded by government inspectors as the boxcars passed through Winnipeg. This grading governed how the still-travelling boxcars, containing the government standardized grades of wheat, were to be handled as they arrived at the terminal elevators. The highest quality wheat would be segregated in particular bins in the terminal elevator, etc.

Steam-powered ocean ships required specialized hull construction to avoid damage in ocean storms. In addition, extra space for fuel was part of the design, because thousands of miles had to be travelled before the next supply of coal was reached. Ocean ships were not economical to bring past the ports of Montreal, Quebec City and the other locations where large terminal elevators served ocean ships. River ice also meant that Montreal, Quebec City and similar St Lawrence ports could not be used during the winter and early spring.

Lakers for use on the Great Lakes could be built as large as the smallest lock they were to use, with little concern they would ever see ocean-sized storms. Smaller canallers were of specialized dimensions - depending on which of the canals they plied. Lakers and canal boats could count on frequent re-coaling opportunities on their routes as they waited for their turn through locks etc ... so little cargo space was lost to coal bunkers. 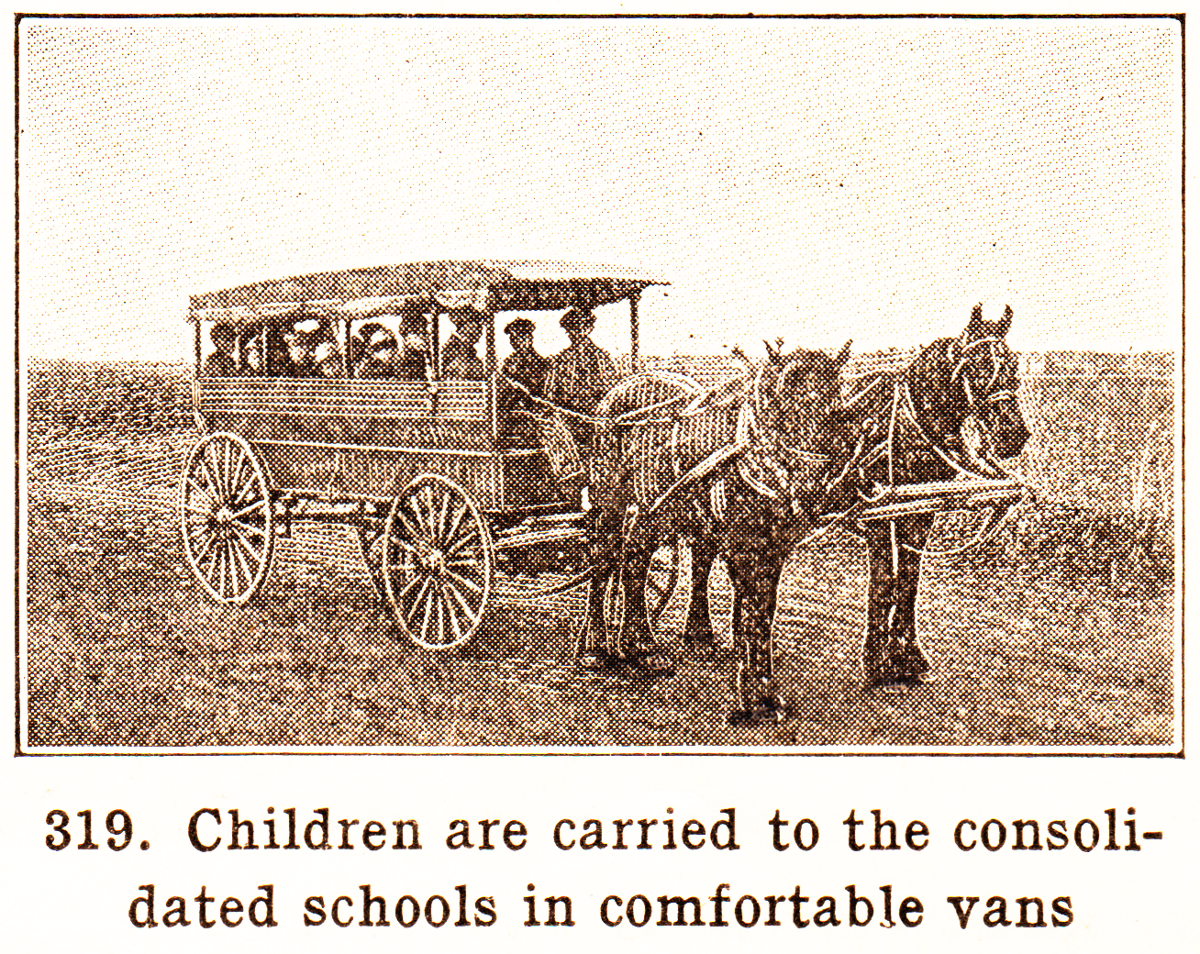 In winter, it would be necessary to use sleighs.
... Come back and ask again about comfort then. 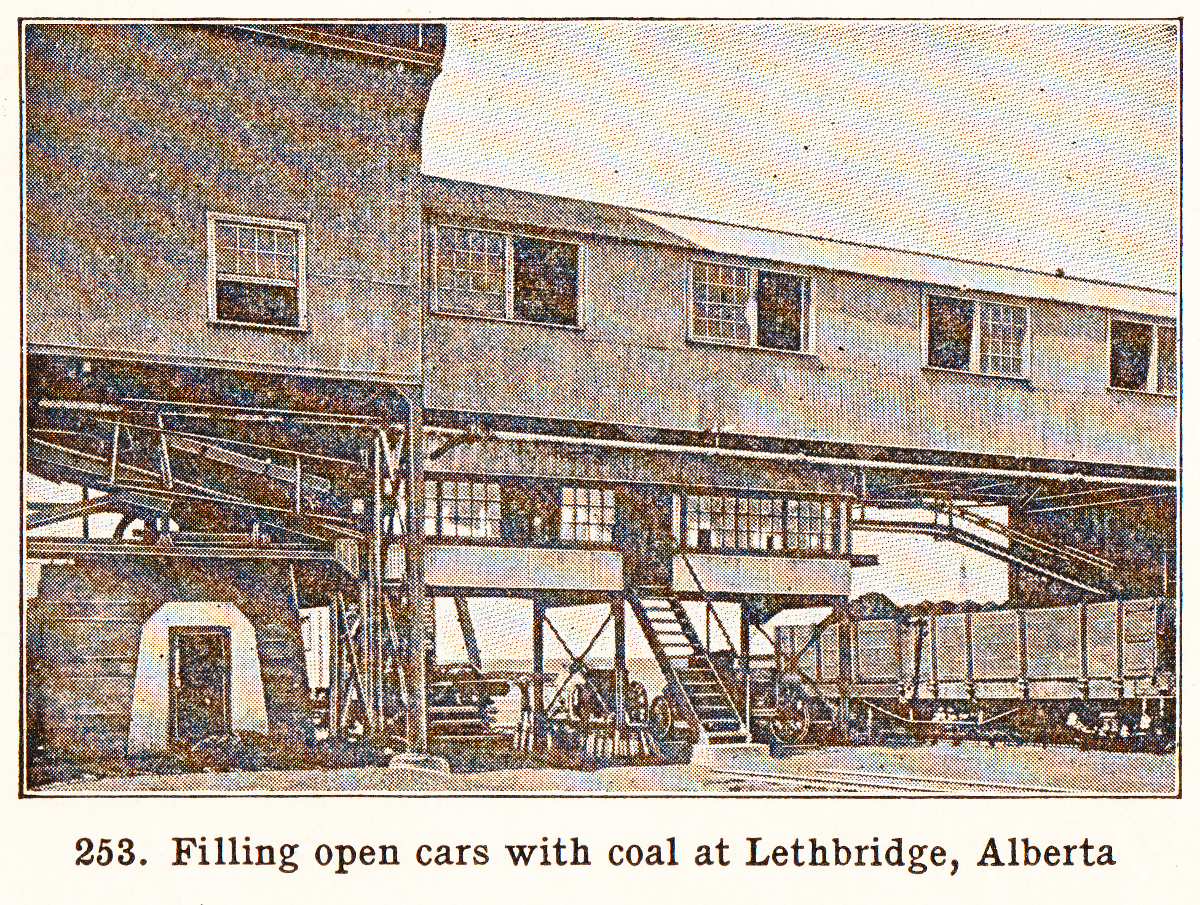 My brother forwarded to me this information from Jason Paul Sailer ...
The Galt #6 Mine was in operation in North Lethbridge from 1909 to 1935. 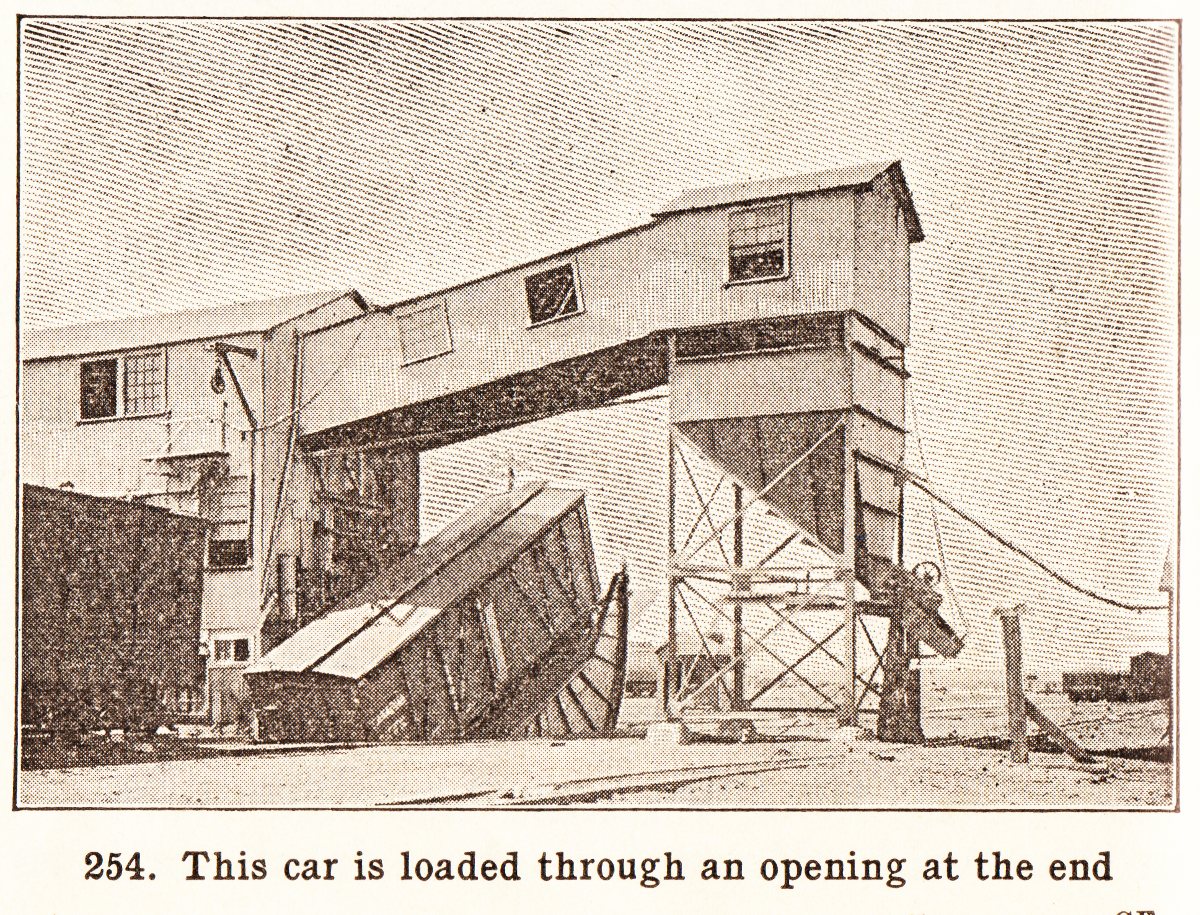 This extinct design of boxcar could be used (as shown) for bulk commodities such as coal, or grain. 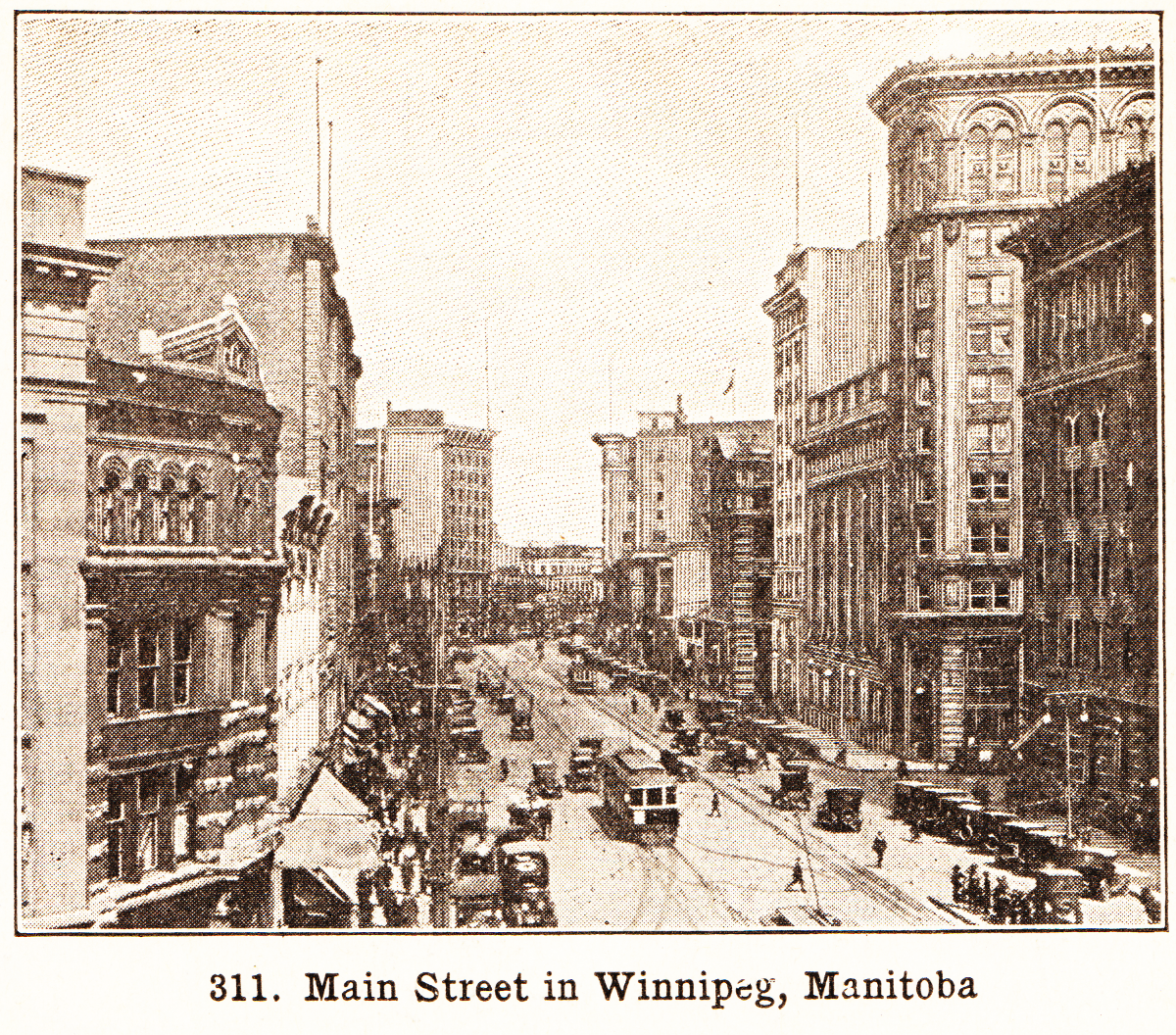