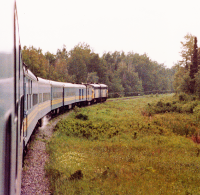 As we travel southbound, you can contemplate some evidence from the 1969 Royal Commission. 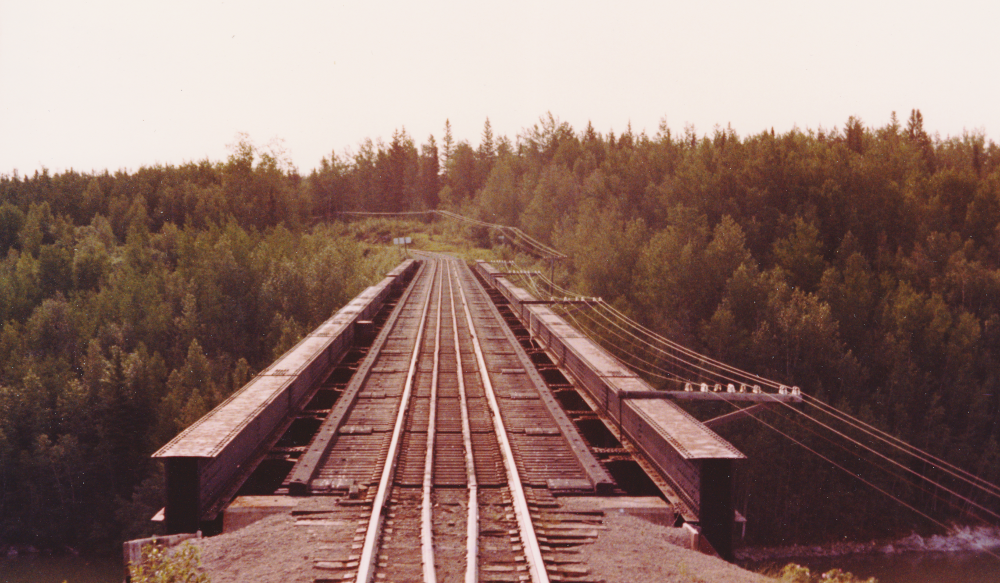 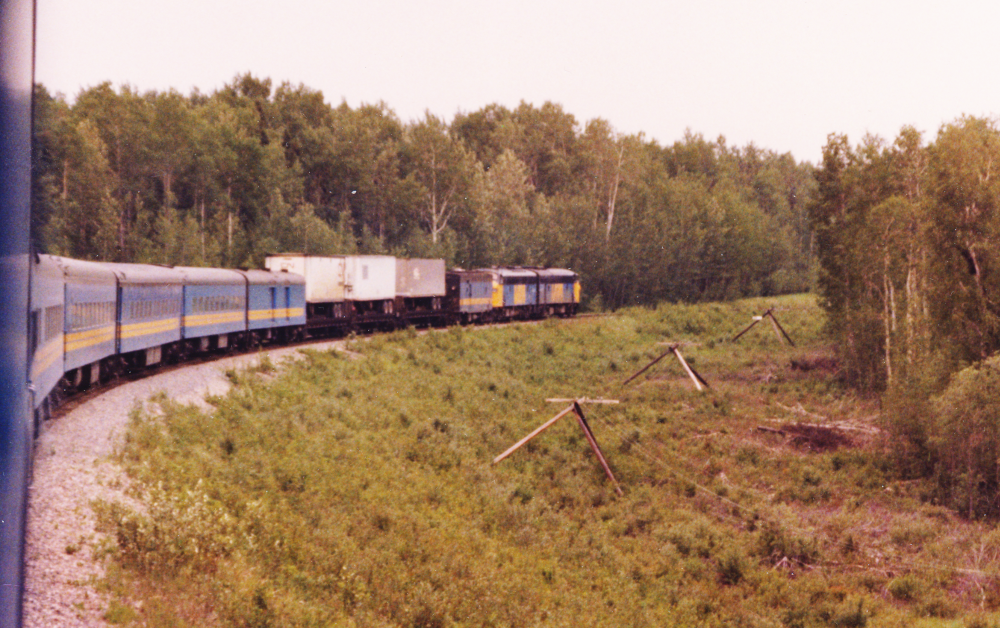 The unique headend traffic is still with us.


Unless otherwise noted, black and white images and diagrams are from: 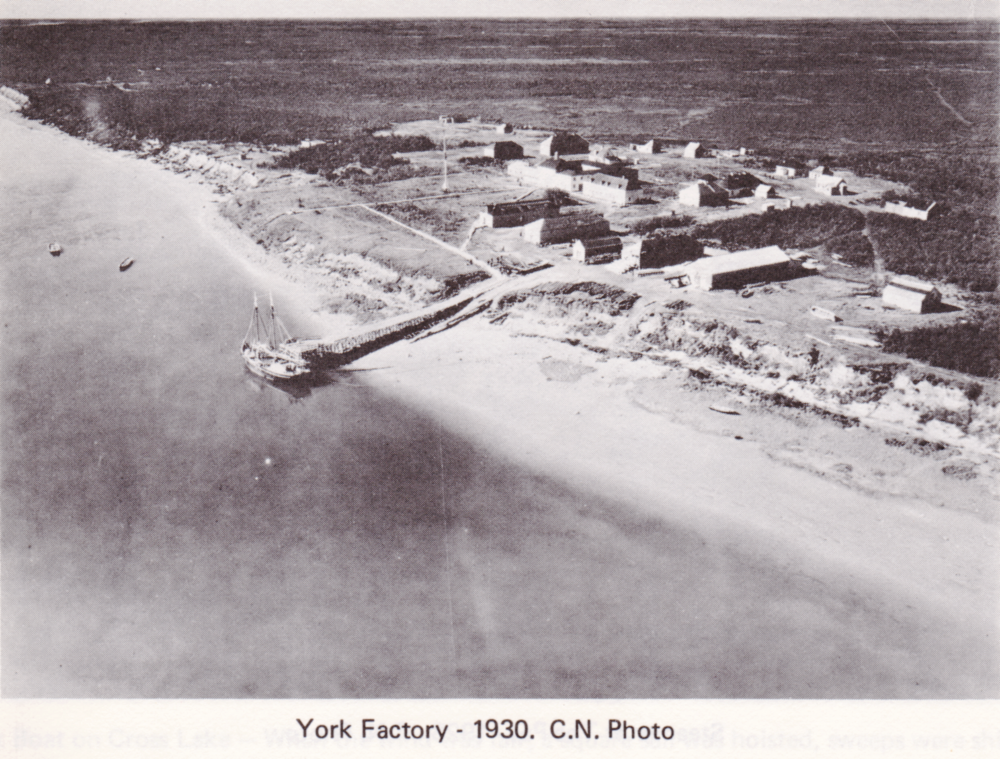 Here is the former Hudson's Bay Company post at York Factory - at the mouth of the Hayes River.
Port Nelson, the original terminal planned for the Hudson Bay Railway, is on the nearby Nelson River. 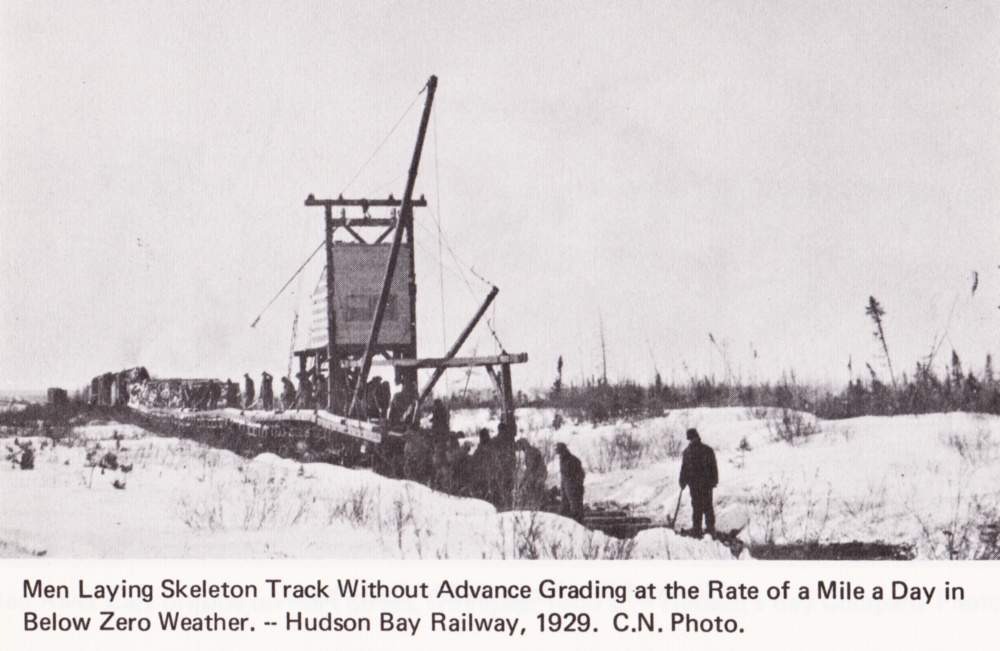 The Canadian Government is getting the railway finished. 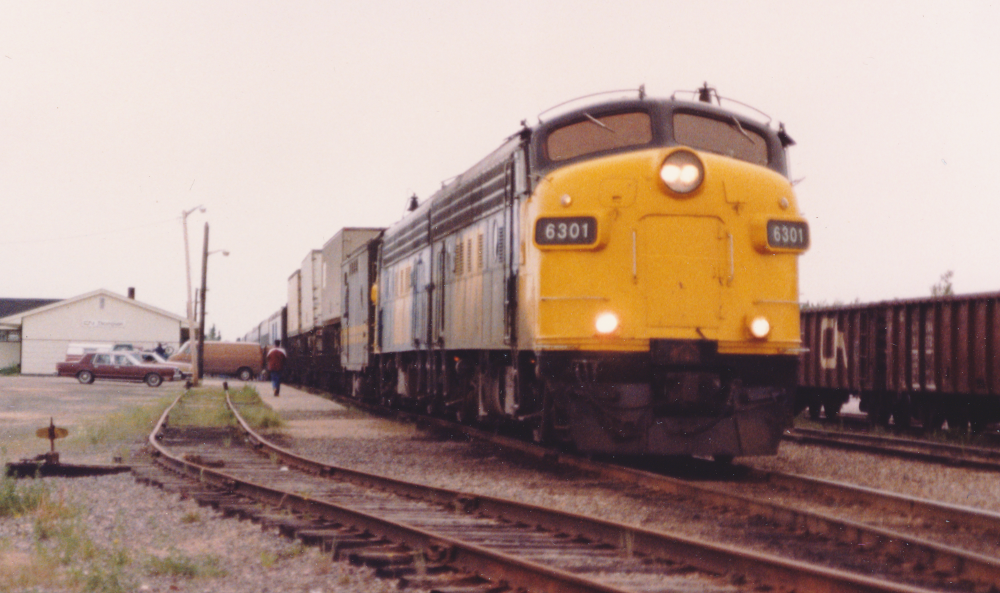 At Thompson, our train has turned on the wye and backed into the station.
Thompson was at the northern end of the provincial highway system.
A large item is being transferred to the brown van from the baggage car.

Our power sets off the trailers near the station. 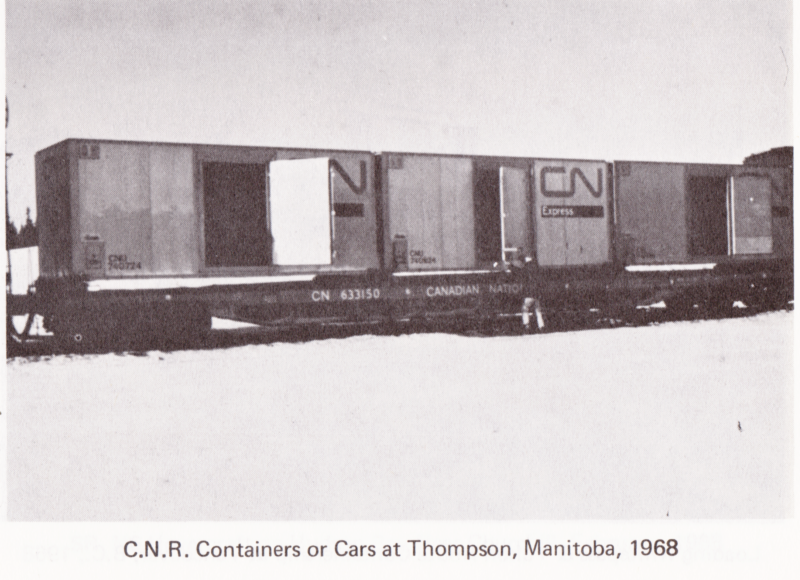 The Royal Commission looked at some of the intermodal equipment the CNR had experimented with on the line. 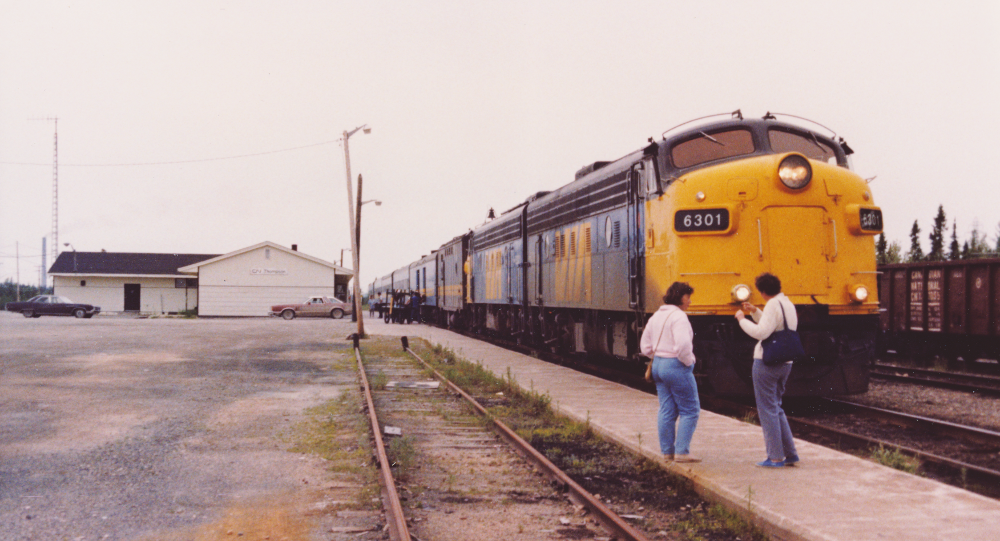 At Thompson, my spouse was talking to some men who had a canoe transported north in the baggage car for some fishing. It cost $3 to take the canoe one hour north. There had been a fire on the lake where they were fishing and water bombers had been working to extinguish it.

Above, Susan converses with a woman from Sydney, Australia. She had been travelling in Canada for about two months. Next, she was heading west. On the west coast she expected to take the CPR 2860 excursion on the BCR up to Squamish and to travel up to Alaska. She remarked on some of the strange questions asked on the Churchill bus tour by some of the visitors from the south.

... Like Canada, Australia has an interesting railway history and tradition - which included junctions of different gauges where all passengers were forced to transfer. If you listen to Australian podcasts about science or general news, you will frequently hear the expression 'down the track' - often used to indicate some time in the future.

Susan also recorded that our dining car waiter (Karen) asked where we were from and said it was nice to have some Canadians on the trip. Most passengers on this train were usually from the US or Europe.

A definite 'us and them' perspective had developed after our experiences at Churchill. As an example of our contrasting approaches ... Susan recorded that a birder from The Pas, as he got on the bus at Churchill, was told how much he looked like Spock from Star Trek. 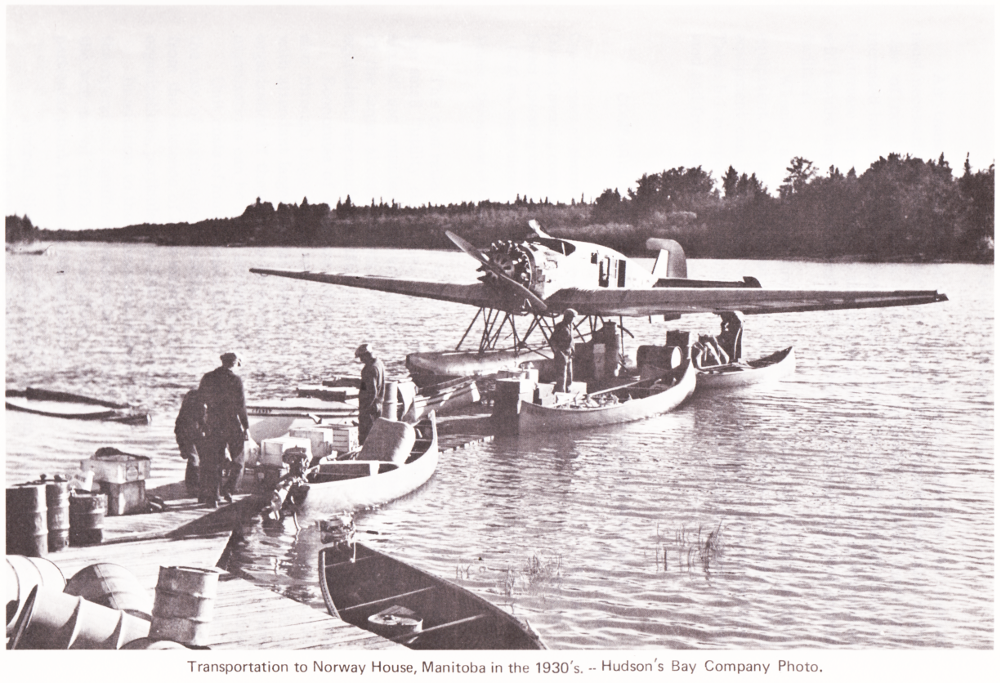 "The brother of my uncle from Portage" worked here as a park ranger for a number of years.

Below, is some evidence submitted by the CNR to the Royal Commission.
Where roads do not exist, the alternative to rail passenger transportation up here is flying.
You can imagine some of the medical flights which take place in rough weather. 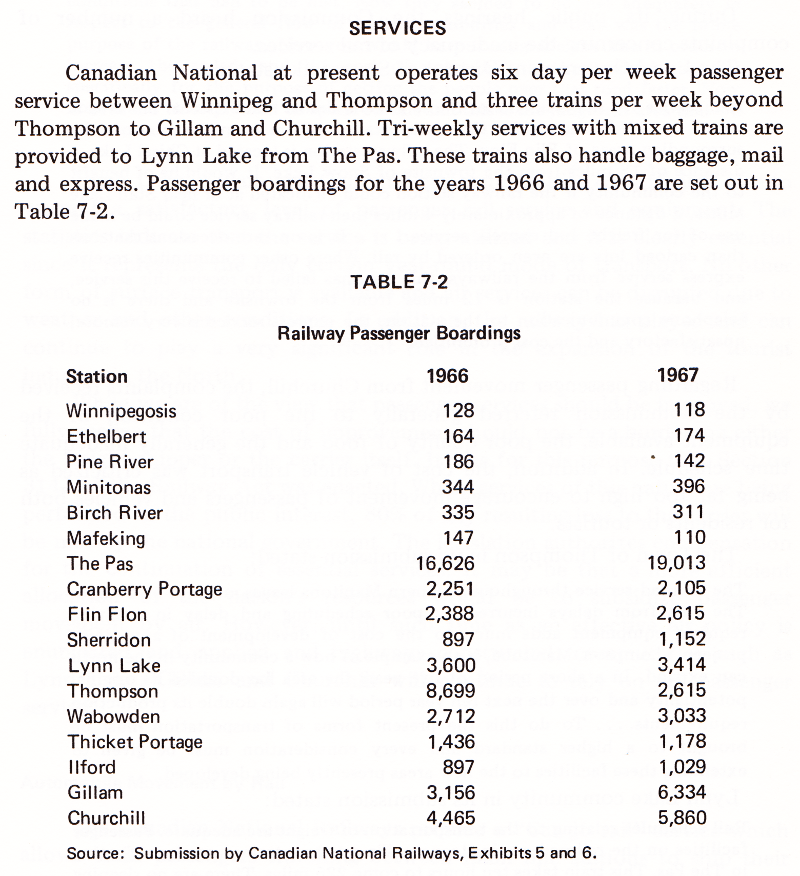 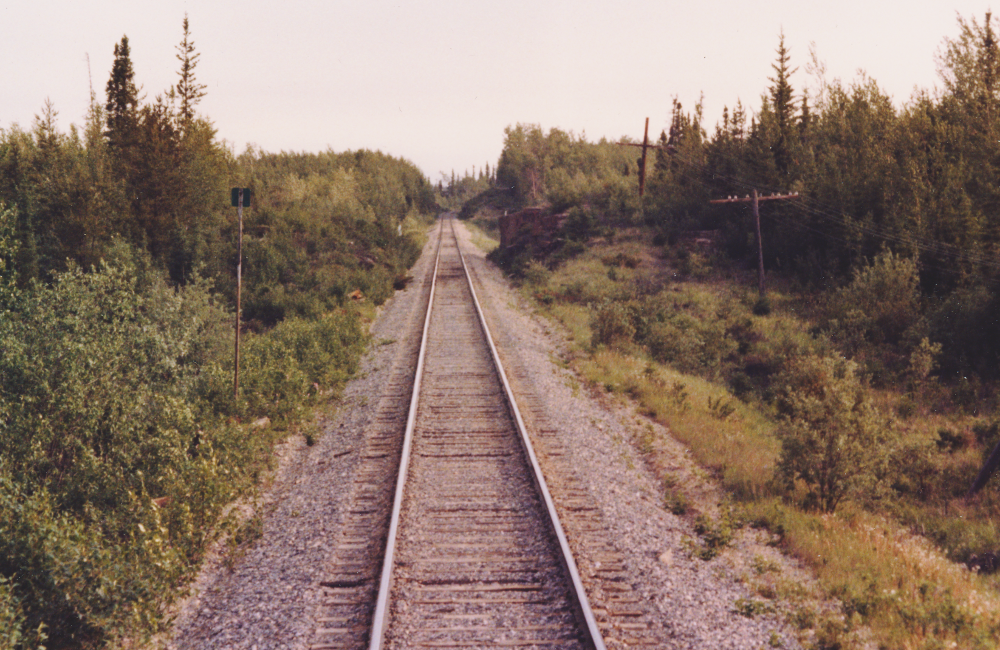 This is beginning to look like every vacation we ever took to the west through northern Ontario. There's some nice fresh ballast. Pierre Berton would note that the Canadian Shield landscape is a unifying, common experience for most Canadians.

At Thicket Portage, I recorded that we took the siding for the Way Freight - '295'. We were in MBS territory, I think, and train numbers did not appear in the employee timetable. Their train was led by four GP9s (probably a couple were deadhead), and included two auto carrier box cars, Branchline Rehabilitation Program hopper cars (for track ballast) and some autos on a flat car. 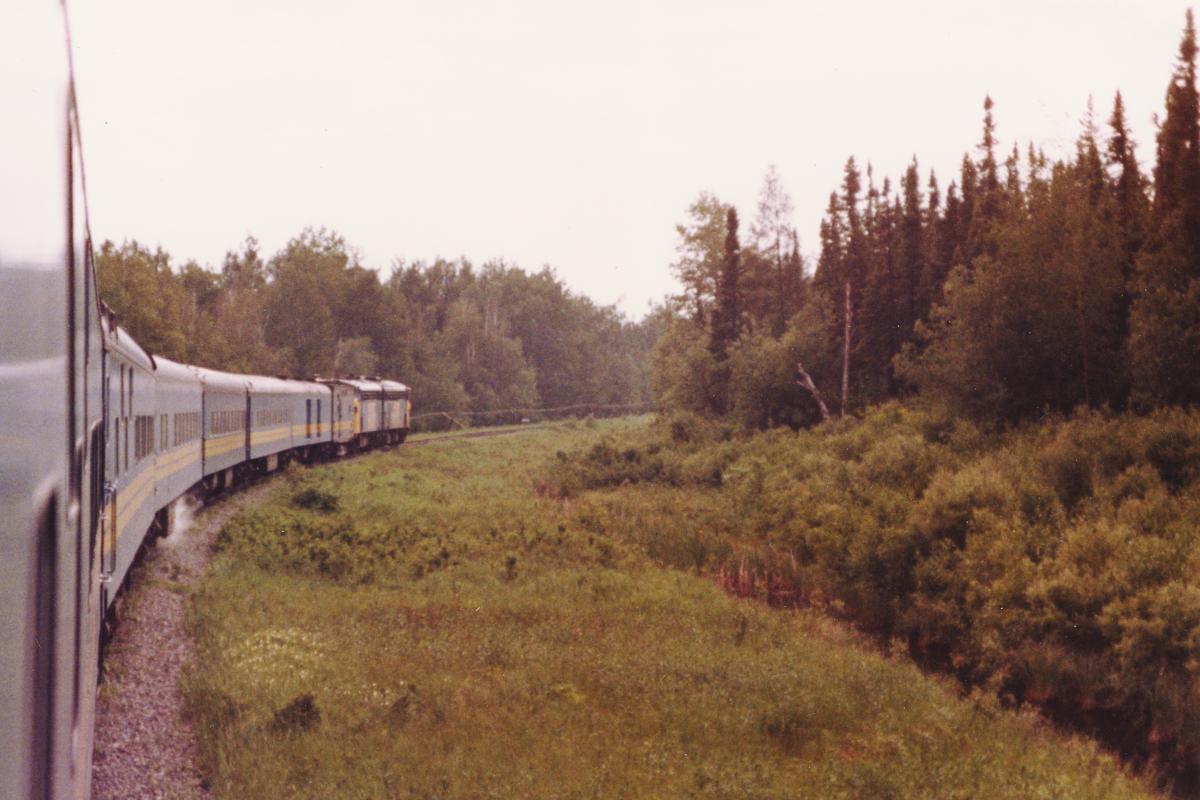 Steam or water is being discharged from the dining car.


Since the invention of the battery-powered radio scanner, my poor sleep overnight on trains has been guaranteed.

This failure to sleep had begun a couple of decades earlier when, as an eleven year old, I had been sent on a solo trip 'for fun' by roomette from Montreal West to Fredericton Jct via the CPR short line through Maine. My expectations had been far too high for the whole affair because of the prospect of a train trip. Most of my railway experience had been with daytime steam excursions using heavyweight equipment with opening windows.

... In reality, night fell shortly after the train left Montreal - the dimly-lit, brown roomette interior jolted erratically back and forth during that long, long night. One available diversion was switching on the noisy, vibrating rubber-bladed fan - Thomas Edison himself had probably clipped a blade on the DC thing, to ensure it ran unbalanced. You have already guessed the other pastime in a roomette: propping up the bed while trying to use the toilet. Outside was blackness. 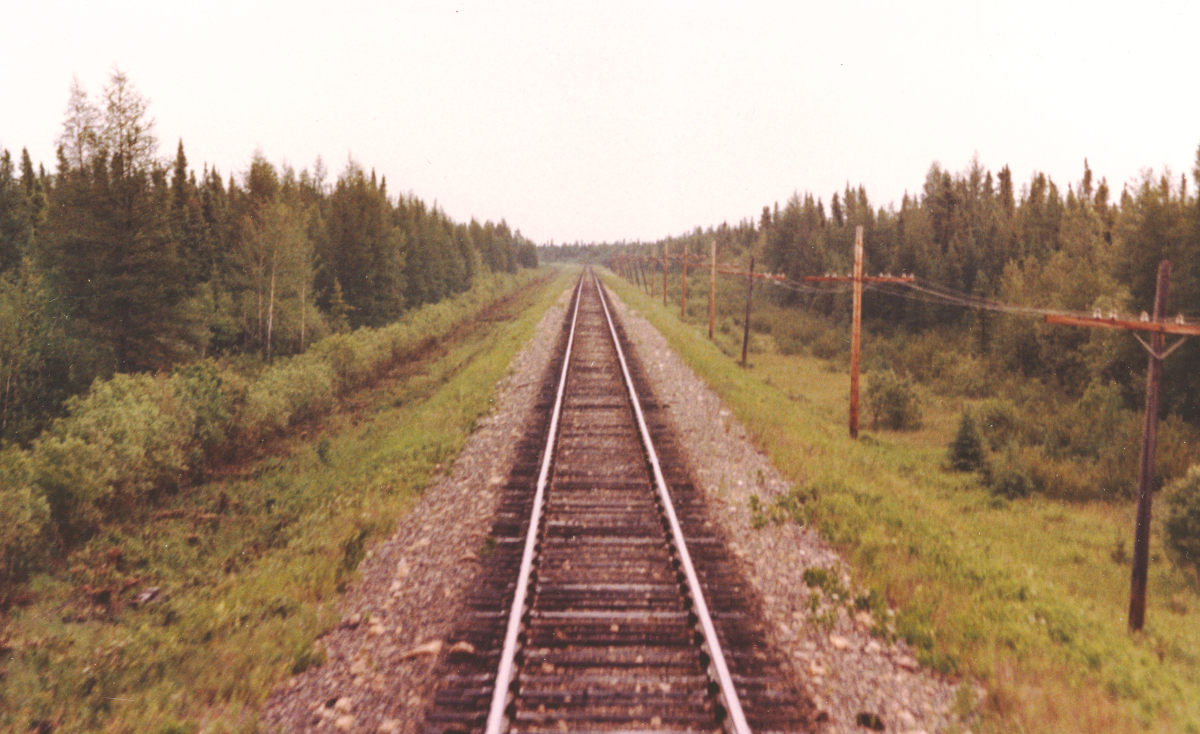 ... In more modern times, the spooky synthesized 'Mr Rogers' voice of a CP trackside detector in my earplug was an effective way to be jarred awake at regular intervals in a roomette or half bedroom. But, as working adults ... so little of our lives was vacation and spent on trains that I just didn't want to miss anything.

When the photo, above, was taken we had spent three consecutive nights on the trains to and from Churchill. Staying awake to experience the 'midnight sun' of June (actually twilight at this latitude) added to my sleep deficit. With 'Cornelius' (of the previous post) off the train, I was finally getting my fill of rear vestibule riding. The noise, wind, and fatigue from holding on and maintaining my balance eventually made me realize that it was time to return to the muffled peace of the sleeping car interior.

I made a point of staying a little longer. This era was coming to an end.

Indeed, this was my last view of the CNR ('Serves All Canada') from the rear vestibule of a passenger train. It was a warm, hazy summer day. The Canadian National Railways, as Canada's 'railroader of last resort', had maintained this bolted rail north of The Pas as if it was a main line railway. Just look at it. The steel wheels were clicking over the rail joints as we sped through the Canadian wilderness at 50 or 60 mph for hour after hour.

This photo goes with my carefully-preserved memory of those last minutes riding 'outside' on a quintessential Canadian railway through the bush of the Canadian Shield; the old, 'obsolete' government-owned railway line, its cast-off steam-heated cars, communication wire lines, well-maintained right of way and bolted rail.

To borrow Rolly's phrase: The Pride of the Past. 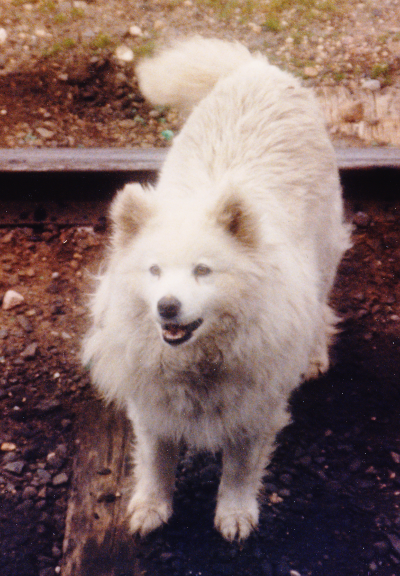 Duff, the VIA 1 Food Tasting Attendant, based at Wabowden,
comes to meet the train. 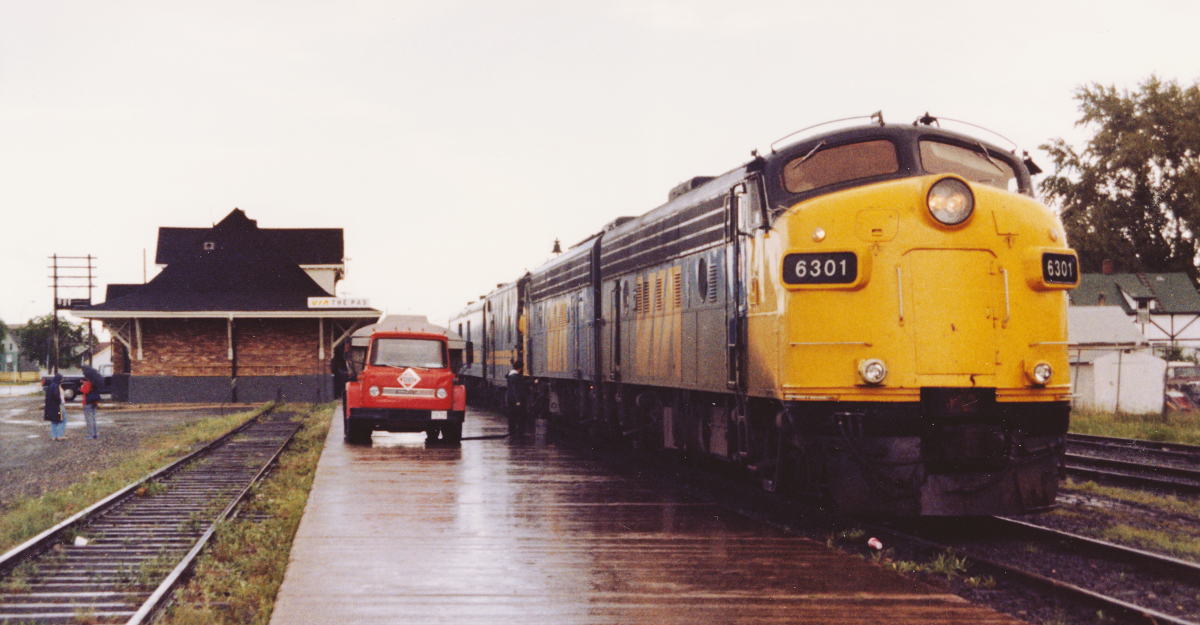 Our notes indicate that Barry (our sleeping car attendant) and Karen (our dining car waiter) told us where we could find ice cream at The Pas and the four of us headed off to get some. The record shows that we discussed world politics and 'some Americans' on vacation.

The next morning, the sun was up early and so were we - for our early morning arrival at Portage. The train was running late, so Barry slipped a note under our door, giving us an estimate of our revised arrival time at Portage.

Looking back, travelling to Churchill turned out to be our best VIA experience of all the long distance trips we took. VIA Montreal replied to the letter we sent expressing our appreciation for Barry's efforts to make our trip so enjoyable.