BRC 1922 The Board of Railway Commissioners 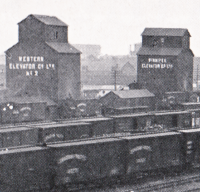 Years ago, one would often see framed notices like this in Canadian railway stations.

Being a locomotive engineer would probably be the best railway job many kids could imagine. But being on the Board of Railway Commissioners sounded pretty good as well. It sounded like a job where one would sit around and talk about trains all day, and maybe go on field trips. I always wondered about  this.

Recently, I found that one of my neglected books included a description of the original BRC - by someone who 'wrote the book' on the Board of Railway Commissioners. That follows below.

But first ... exactly what is the pyramid of authorities described at the top of that notice?

A consolidation of legislation and case law was made by a couple of lawyers with KC after their names (King's Counsel - designating an eminent lawyer). This is the document one finds at archive.org  . You can see all the older laws they had to bring together ... 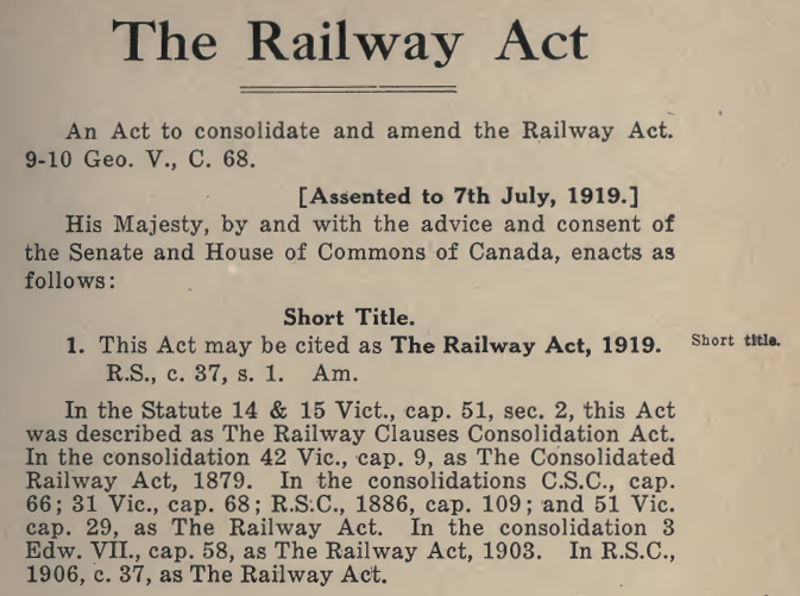 Getting Back to That Notice ... 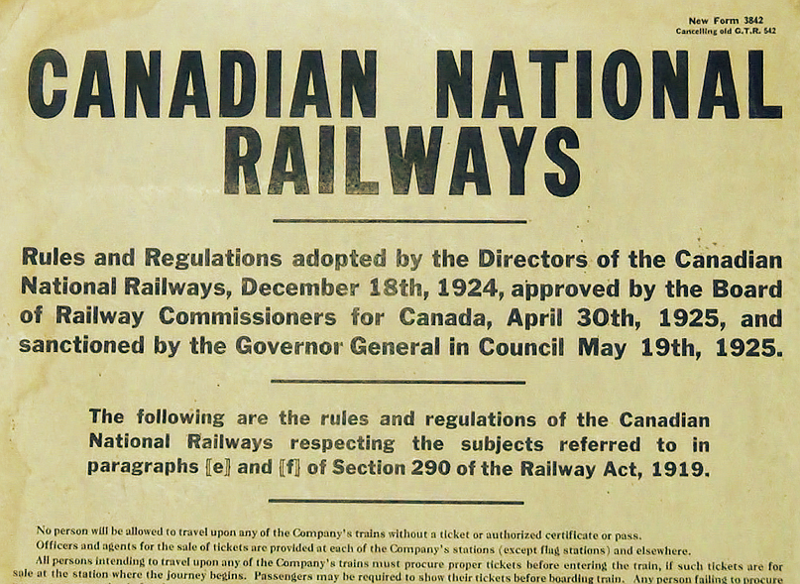 To understand the authority for the notice and its rules, starting from the highest authorities ...

These regulations had been examined and accepted by an appointed panel of railway experts ('approved by The Board of Railway Commissioners for Canada').

To start the ball rolling ... these regulations were proposed by the company ('adopted by the Directors of the Canadian National Railways') ... because that is permitted under the Railway Act, 1919.

Back then, the CNR was a Crown Corporation with directors appointed by the Government.

You may already know that King George V was generally the last British monarch to share and promote his opinions about how a war should be waged with democratic leaders - during the Great War.

But, as you can see, he was also a 'railway man'. The Canadian Governor General in 1925, The Lord Byng of Vimy, approved the railway rules for the CNR notice. ... But can we be sure that King George V didn't try to pass on his own pet ideas about selling tickets to passengers boarding at flag stops and expectorating on railway property ?!

According to the Railway Act, 1919 , Section 290, the directors of a railway company can make rules, etc, and here we're talking about those rules described in paragraphs (e) and (f) ... That notice will be reproduced in its entirety in another post. It is quite a long and historically interesting list of rules.

Spoiler alert: Literally the bottom line is that you can be fined up to $40 (about $570 in 2016 dollars) for violating the rules, and the railway can use reasonable force to make you stop ...  eg. spitting, playing games of chance, selling goods without authorization etc.

Let's explore the second best railway job (the BRC) and where it came from ... 
A biographical note from the Annals of the American Academy of Political and Social Science, September 1899 on Simon McLean 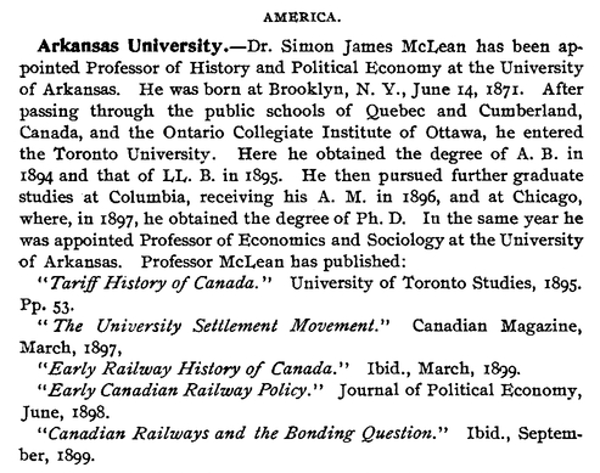 Simon James McLean was one of Canada's 'international knowledge workers' - a century ago.

The mention of Simon James McLean (below) comes from the article on Andrew George Blair 1844-1907 in the Dictionary of Canadian biography. Blair was a former premier of New Brunswick and had joined Laurier in Ottawa as Minister of Railways and Canals in 1896. 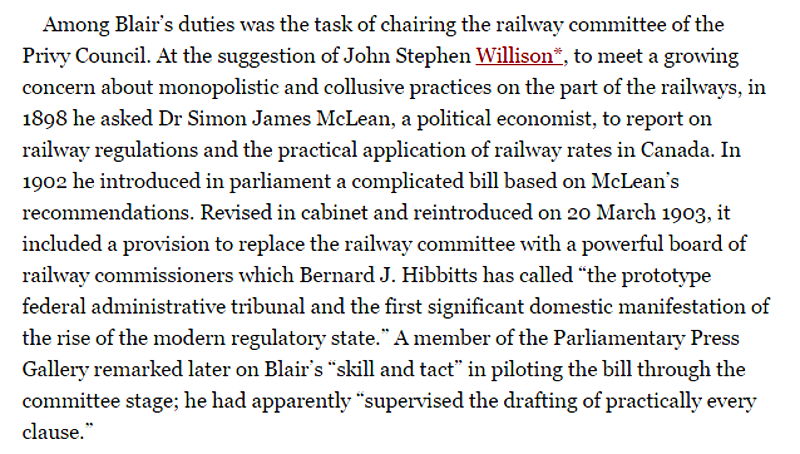 Railway and Canals Minister Blair had a major falling out with Laurier over Laurier's surprise scheme of the building of the National Transcontinental/Grand Trunk Pacific. As Blair resigned over the issue, he gave a five hour extemporaneous speech in the House of Commons and quoted from his correspondence to Laurier - Laurier's complexion turned from white to grey at this point.

"It will be difficult to explain why government should build and own the lean section of this railway, and provide a company with government credit to enable them to build and operate the fat section."

This article (below) from The Stanford (California) Daily, September 29, 1908, documents more aspects of McLean's career as he became a member of Canada's professional civil service. 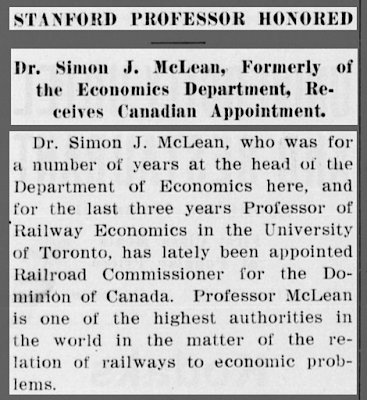 This section comes from Simon J McLean's own book - published 1914, 1922.
My copy cost $7, but this book is also available free at archive.org . 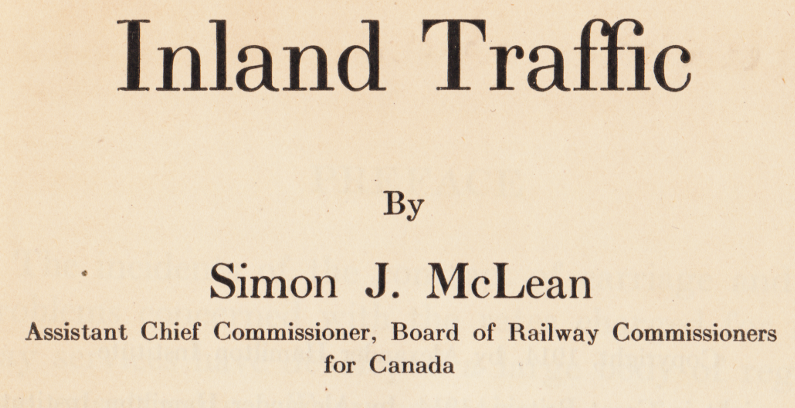 As is often the case with political problems, it was about money - particularly freight rates and the prices charged to move the products which farmers produced. Was one type of traffic unfairly subsidizing another?

And who was getting more favourable treatment? ... Canadian vs US shippers, Montreal vs Toronto, region vs region ... and so on to infinity.

I have reproduced Simon McLean's brief description of the creation of the Board of Railway Commissioners. Historically, it is interesting to understand why this field of government regulation had become necessary. In case you'd like to skim over parts of the text, I have summarized a few points, following his numbering system.


Just before section 9: "The old belief of efficiency in competition as a regulator of rates was shattered."

In section 10, McLean describes some of his fact-finding work in England and in the US. 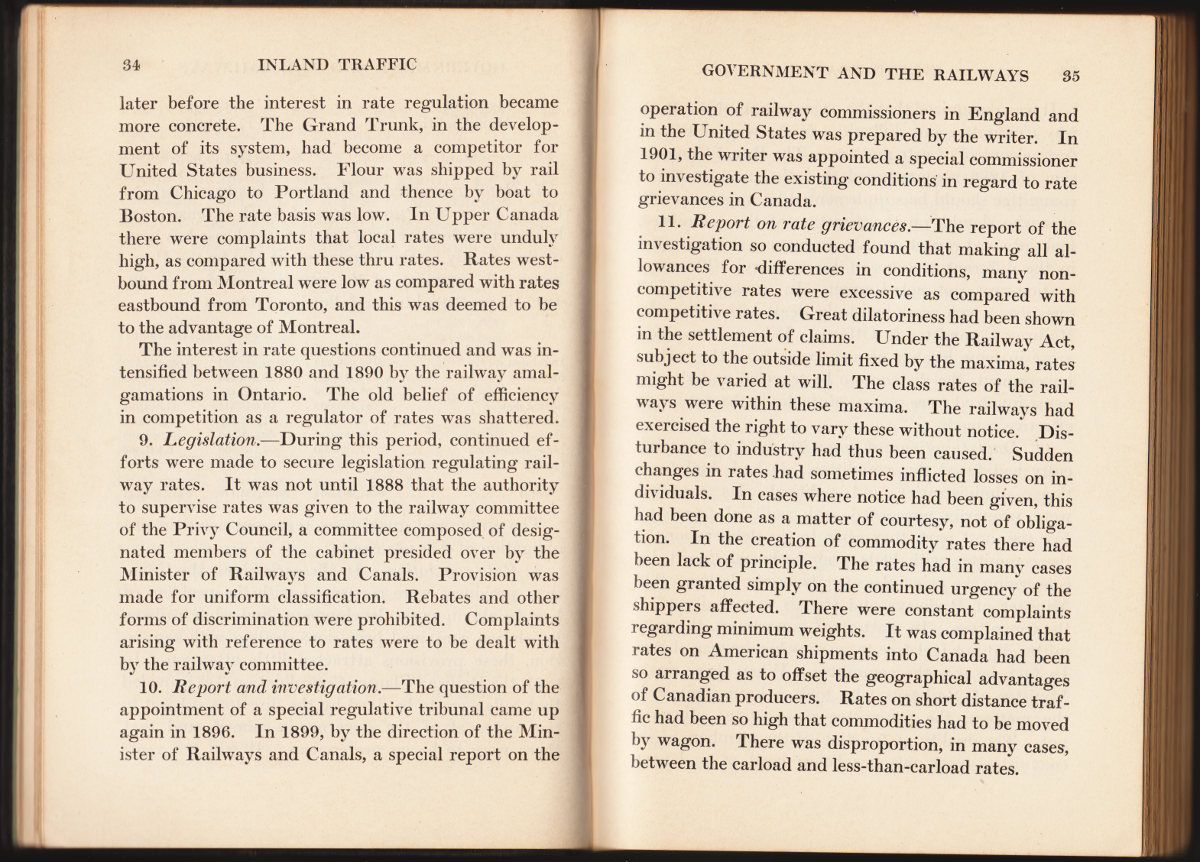 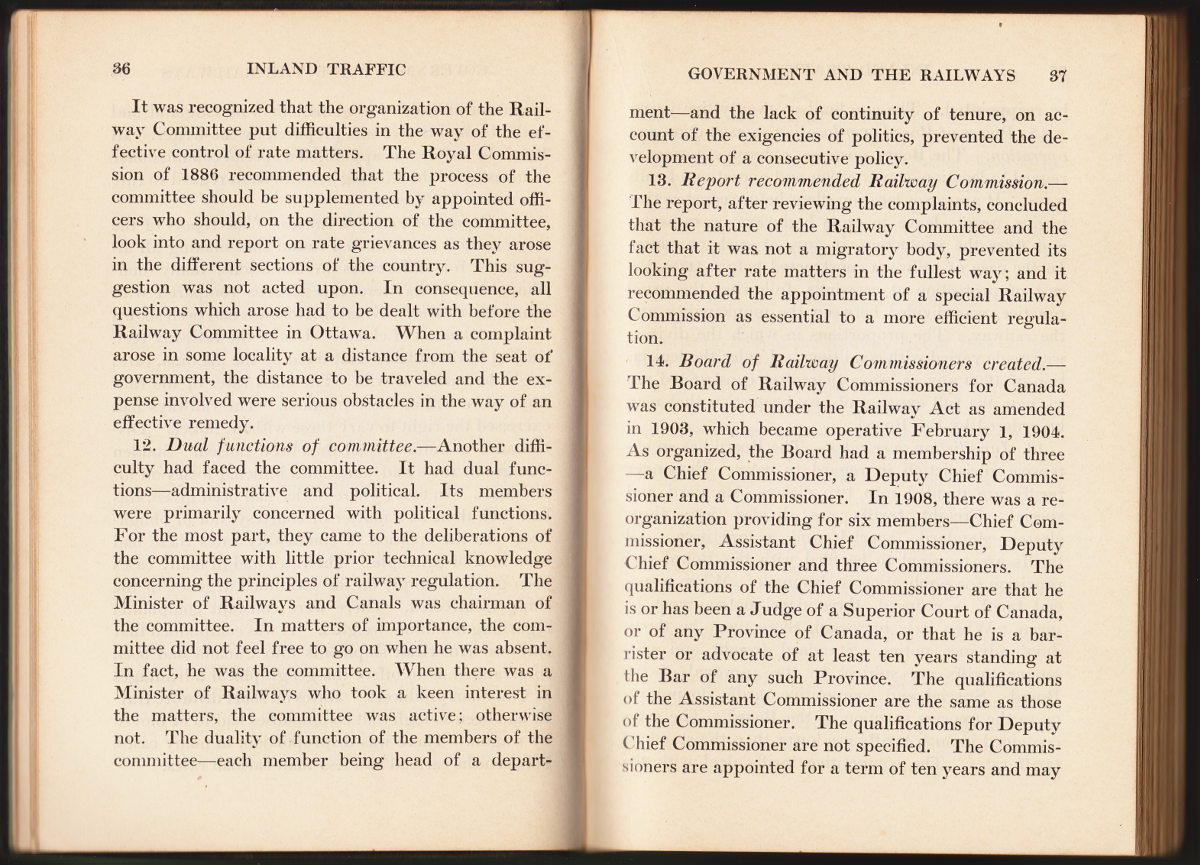 In section 11 (above) the railways were not responsive in dealing with rate complaints. Since 1886, there had been a government failure to set up a system ... to delegate the settlement of rate grievances (from the committee of government politicians) ... to professional officers of the public service.

In section 12, consistently addressing current and pressing railway problems depended on the inclinations and abilities of the Minister. The committee might be paralyzed without his presence.

Finally, in section 14, we see how the Board is to be composed of people who have an understanding of legal matters - because when the going gets tough, the railways and shippers will be lawyering up for a fight. The members of the Board will have an excellent understanding of the legal process. 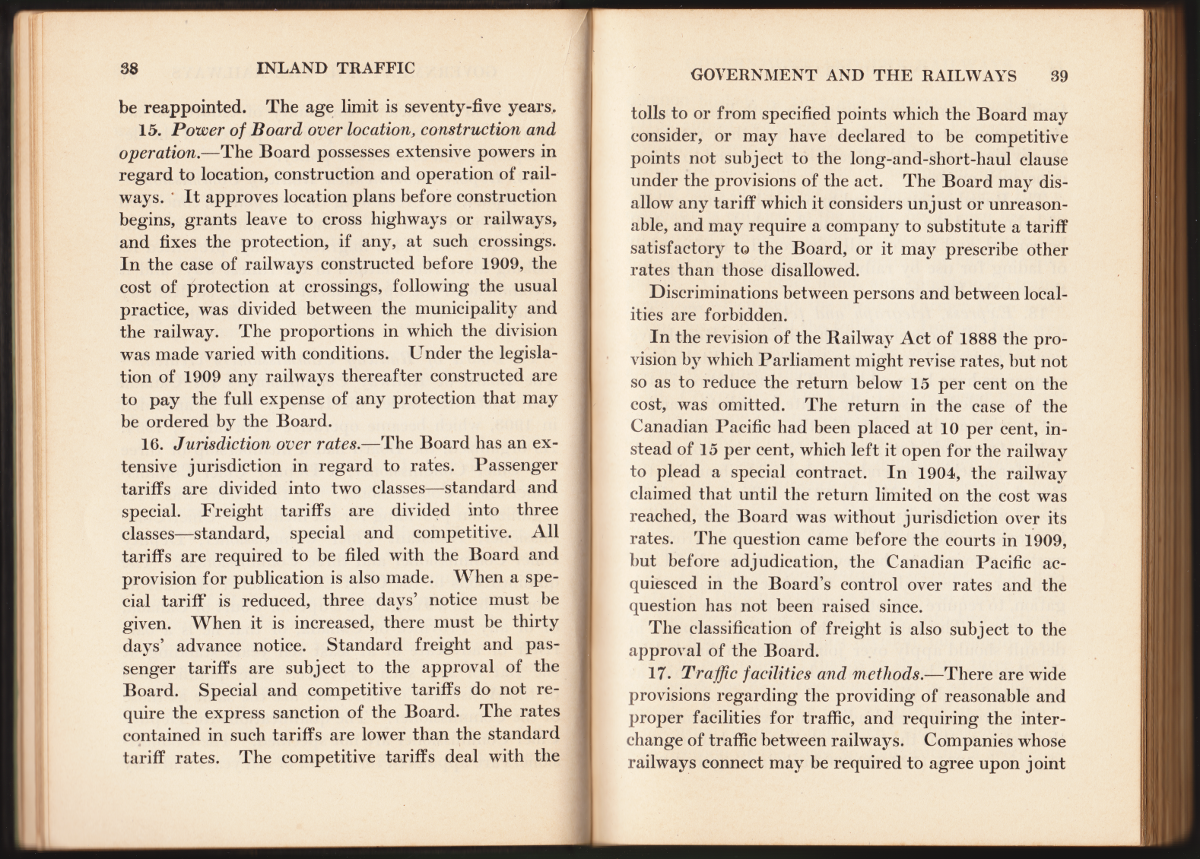 In section 15, the Board will also be regulating railways when they have an impact on the general public - particularly when it comes to safety. Like robust air traffic control procedures today, 'maintaining separation' between trains on a railway, or where railways crossed each other at grade, would have been very important for public safety when most Canadians travelled between cities by train.

Section 16 - all about rates! Finally, Canada has a body which will deal with all the rate issues. The CPR threatened a court challenge, but backed off in 1909. In section 17, the Board will regulate how railways work with each other. For a national and international system of railways to work efficiently, the little-appreciated field of traffic interchanging and documentation needs to be consistent.

In section 18, we can see that other areas of national infrastructure needed to be regulated.

In section 19, is a quintessentially Canadian issue which is evergreen in the complaints it generates - the movement of grain. It has always been a source of contention and it always will be - as long as the Prairies remain arable.

Sections 20 to 25: the Board has great flexibility to self-organize - in order to address the often heavy demands placed on it to act. It is has the power to regulate and to have its rulings stand. In less than 0.5% of cases, were the early rulings of the Board overruled or altered by the designated higher legal or governmental authorities.


... The Board ruled on many of the same railway operating and safety issues which the Interstate Commerce Commission dealt with in the US. 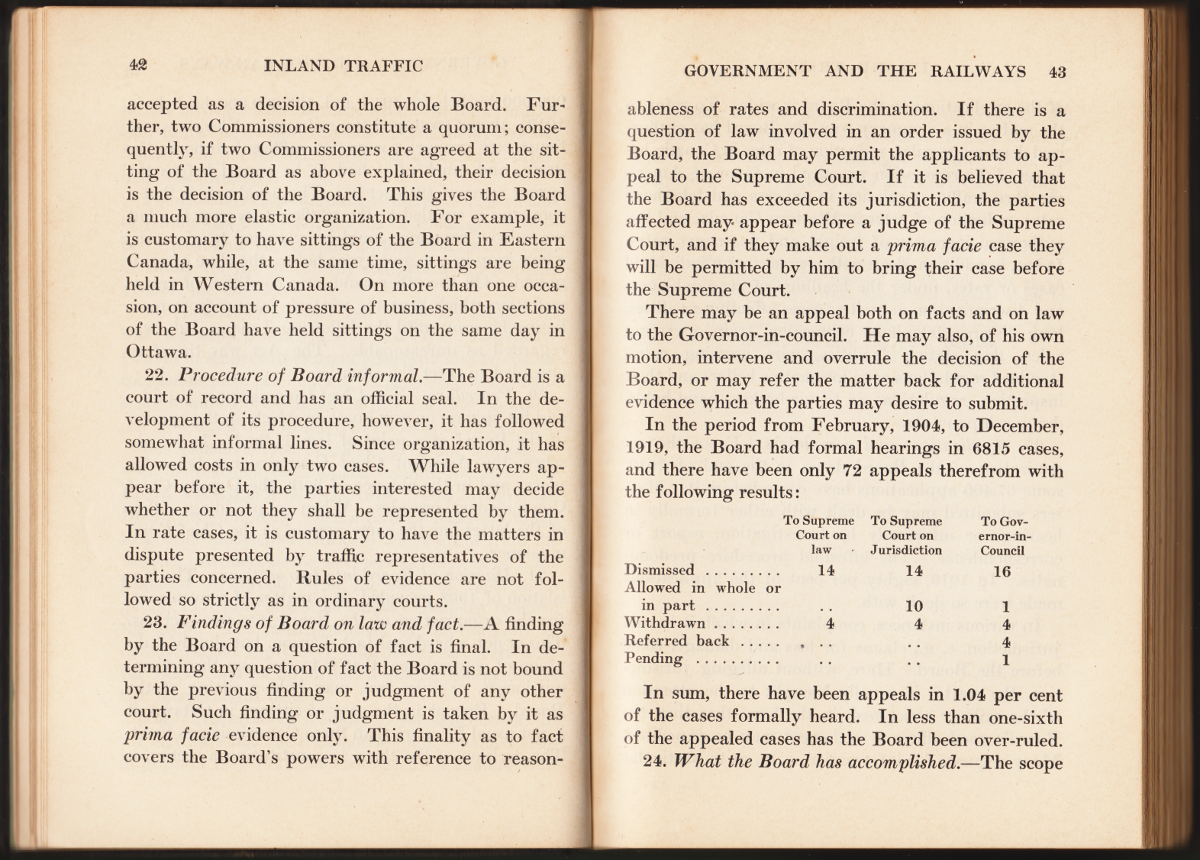 
Politicians have their memories preserved and promoted by their fans, by their political parties (sometimes), by themselves in often-ghost-written autobiographies, and formally by their countries on currency and stamps, through statuary and in the naming of government buildings and public roads ... and even gratuitously on semi-privatized airports. If new scientific discoveries arise on topics such as substance dependence and PTSD ... academic historians revisit the 'personal demons' of leading figures to foster a more balanced understanding of their lives and accomplishments. Their 'papers' (if not their emails and text messages) are usually carefully preserved.

If their companies still have any kind of institutional memory extending back before the previous quarter of the financial year ... railway officers and board members are remembered for their efforts to build and to organize railway systems and transportation empires, and for their abilities to keep the competition at bay and to fill the company's coffers with lucre. A great many were immortalized as a railway 'station' - at least in meeting the definition in the rulebook. A handful lived on after their deaths in the fond memories of their employees. Some are assured their place in history for their development of international systems and conventions, or for furthering the interests of the then Dominion of Canada or the British Empire during times of crisis. Like the politicians, they too have been the subject of many autobiographies and biographies -  even in the modern era.

Then, there are the professional public servants ...
who worked to set up and maintain
institutions essential to the well-being of Canadians ...