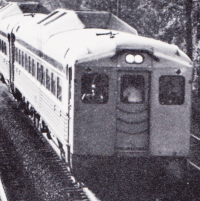 This post looks at an assortment of items which are scarce or absent from railways today.
Some were beloved - some you will be seeing for the first time.

'Double line block telegraph instrument, by which trains are worked
from box to box on the block system.'


... on British railways, up (eg. to London) and down (eg. from London) were used instead of the four points of the compass to describe train direction. Being a British-style railway, Canada's Grand Trunk initially used the up/down method in its rulebooks.

British 'signal boxes' were staffed block control/interlocking towers located along the railway line. While traffic priorities were centrally determined, the local signal box co-operated with neighbouring boxes on each side to work traffic along the line with a sort of distributed authority. Simple electric pulses actuated bells or deflecting needles to get the job done.

In contrast, North American railways used a more centralized military-like authority 'the dispatcher' who issued specific commands to telegraph operators and train crew through a 'binary code' ... which could be sent along the whole line through a single wire.

'Electric staff instrument for single line working.
The staffs are stored in the lower part of the instrument,
and lifted out, when required, through the curved passage above.'

... Perhaps this is similar to the instrument used on the latter days of the CPR's Big Hill ... just before the Spiral Tunnels were completed. The Special Rules for that electric staff system appear near the end of the following page:

Britain also had another way of expediting important traffic by those signal boxes.

'Manual exchange of staff at a single line passing place;
the staff, attached to a curved holder, is being withdrawn by the fireman.

If you check the many video accounts showing Indian railways on YouTube, you will sometimes see this style of staff still used on some of the more remote lines. The staff, or sometimes rings, are often simply tokens which are used without interlocked receptacles ... and they are often exchanged at speed. With this simpler 'token' system, possession of the hardware evidences the right to be the sole train operating on that section of track.

Above, the interlocking rods for the semaphore can be seen and the staff holder is illuminated at night. A ladder enables the signal box personnel to fit the staff to the receptacle at cab level.

'The Pennsylvania Railroad has a number of special long baggage cars
designed for transporting theatre scenery.
Here, one of these cars is having scenery loaded.'

In Canada, slightly shorter trains of these cars were used on the CPR commuter lines to Montreal's 'West Island'. The simple controls, multiple unit capability and ability to quickly swap out the glorified bus motor driving each car were revolutionary. In the 1950s, these light vehicles were substituted for steam locomotives and conventional consists to cost-effectively maintain passenger service on many Canadian branch lines.

... What was lost in exchange for the 1968 iteration of Madison Square Garden.
For many urban planners, this provided a clear example of how not to treat heritage (in this case 1910) architecture.