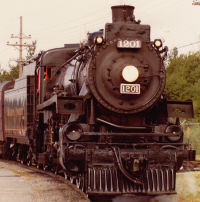 In July 1982, we made our only trip to ride on Bytown Railway Society's excursions to Wakefield, Quebec, which were run out of the National Museum of Science and Technology shop.

On every steam excursion, there is the moment one first sees the locomotive. While the first over-eager photos - into the sun and with odd flaring - are less than perfect, they cannot be reproduced today. 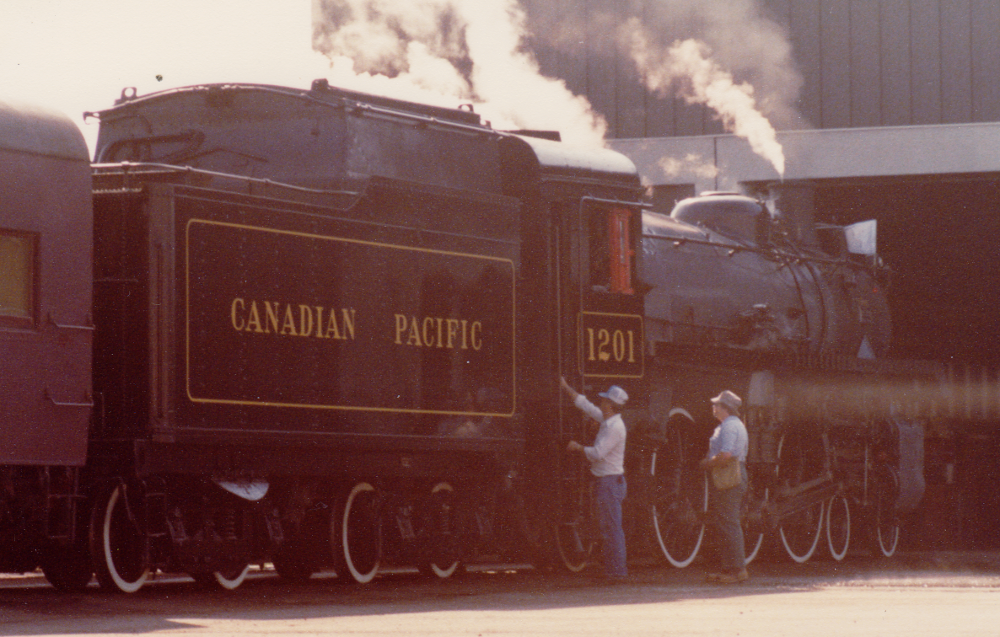 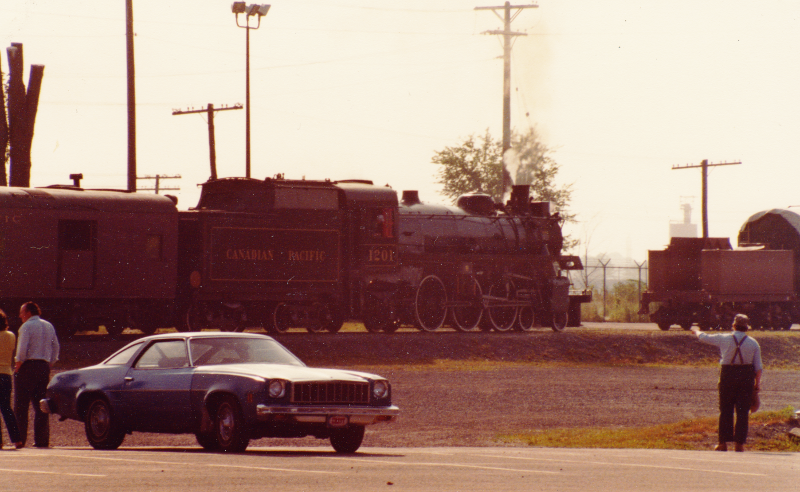 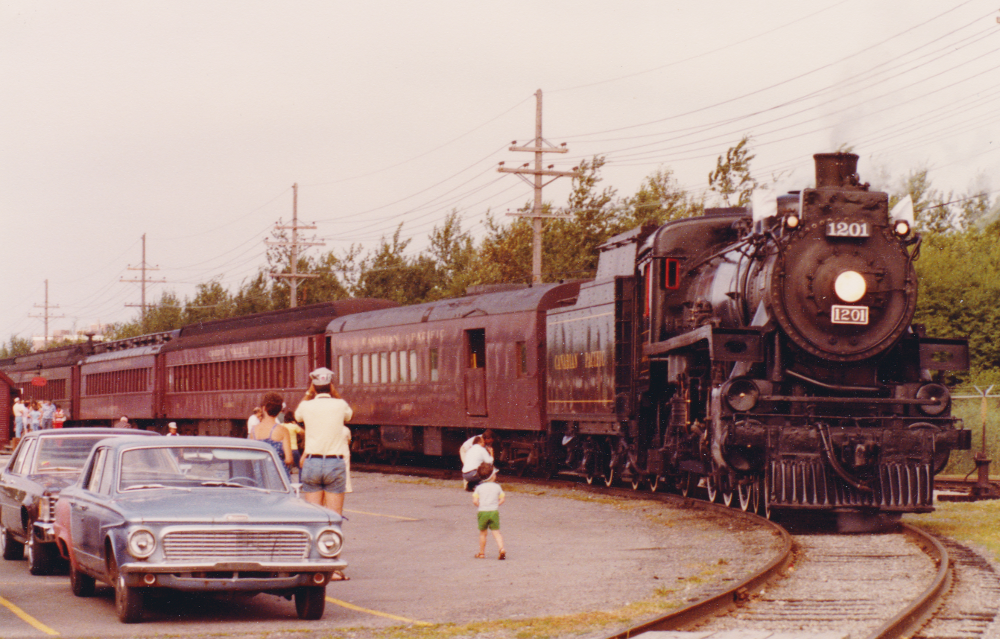 With careless ignorance, I had booked our tickets in the 'first car behind the engine'. Travelling with a tape recorder and camera, I was surprised that we would be enjoying sealed, air-conditioned comfort.

It was even more surprising - on this hot and muggy day - that our return trip would be made with the air conditioning not functioning. Crew members took pity on my disappointment and I was allowed to join Bytown insiders at the baggage door of the combine back to Ottawa. 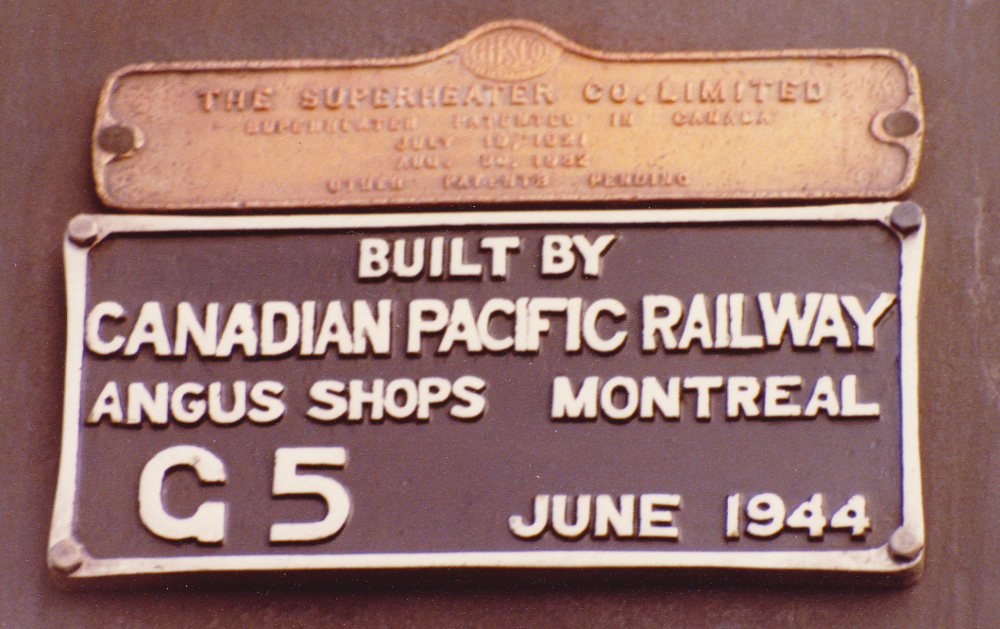 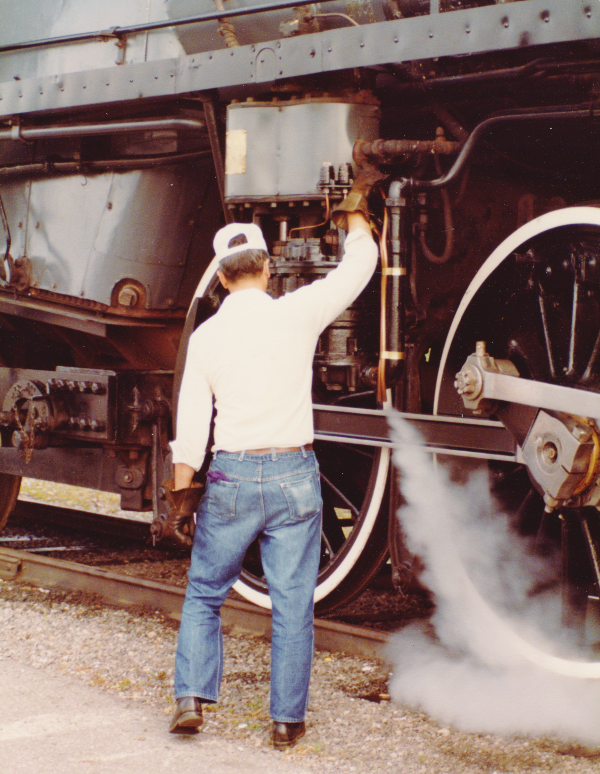 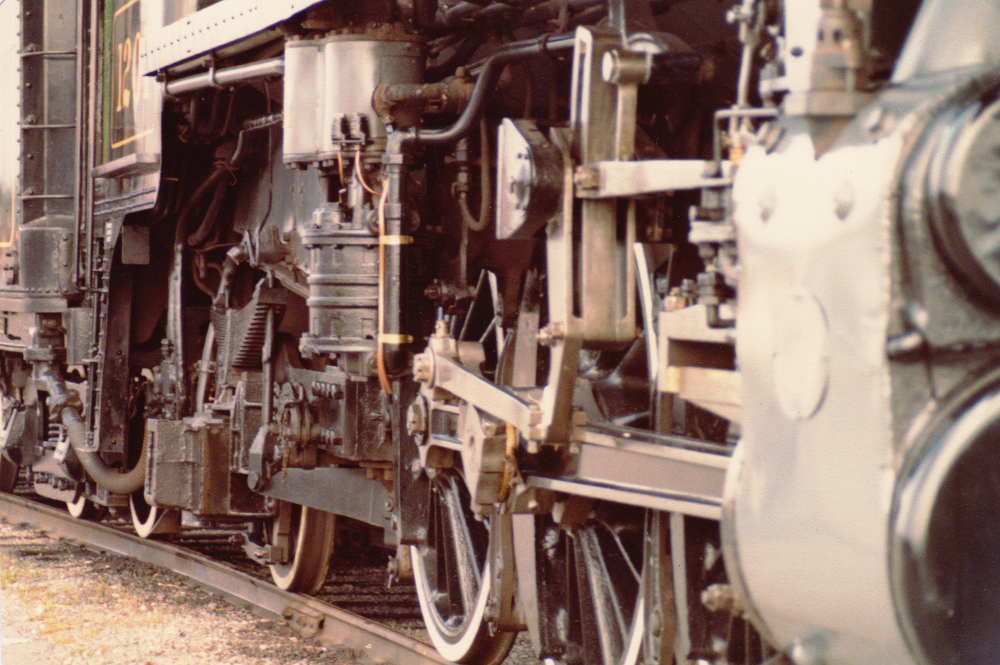 A view of the running gear. 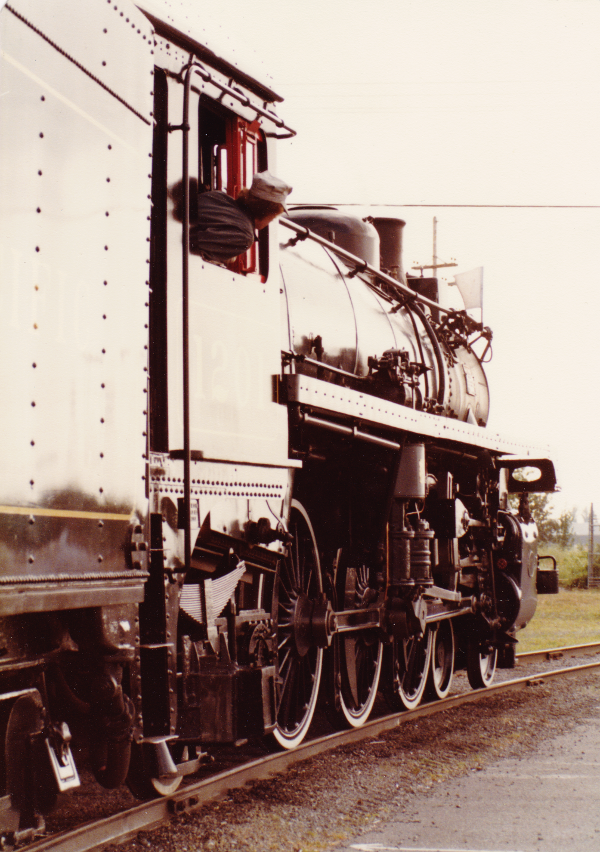 An engine crew member checks the position of the reverser gear. 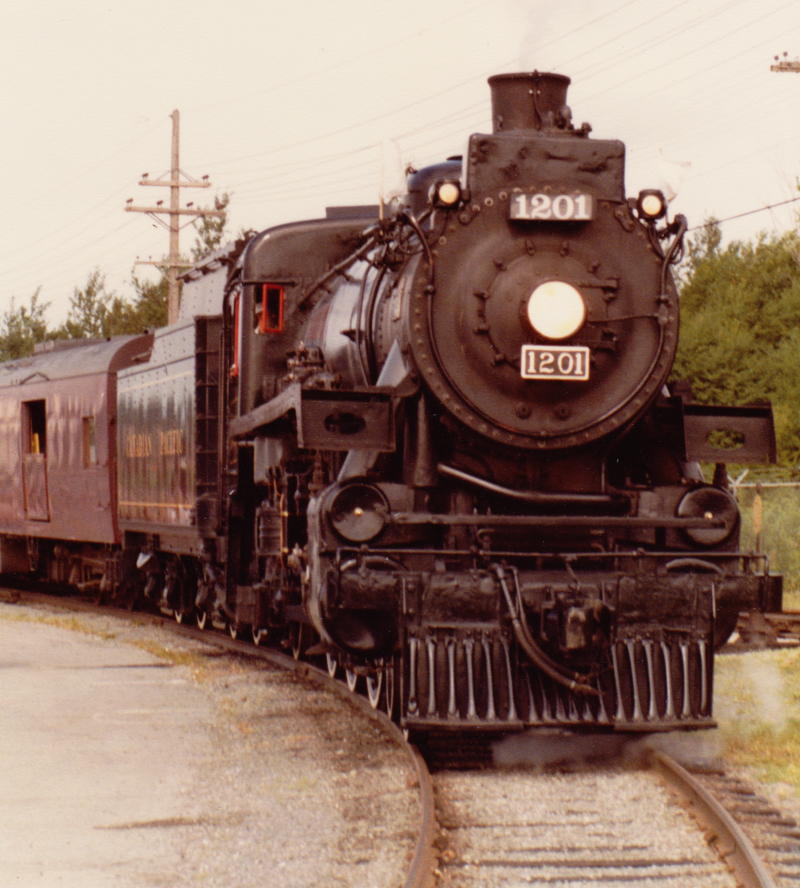 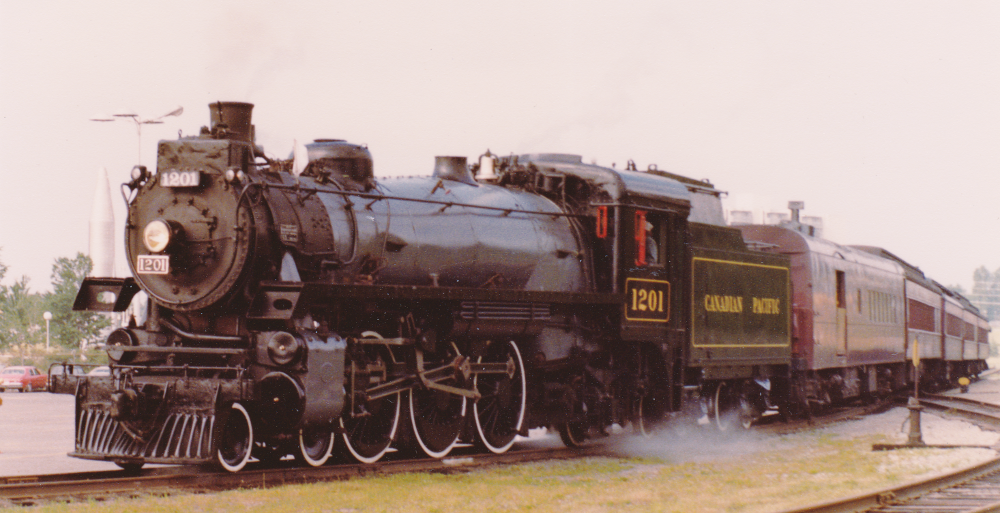 Fireman's side and the whole consist.

... a future posting will show the train and switching activities at Wakefield. 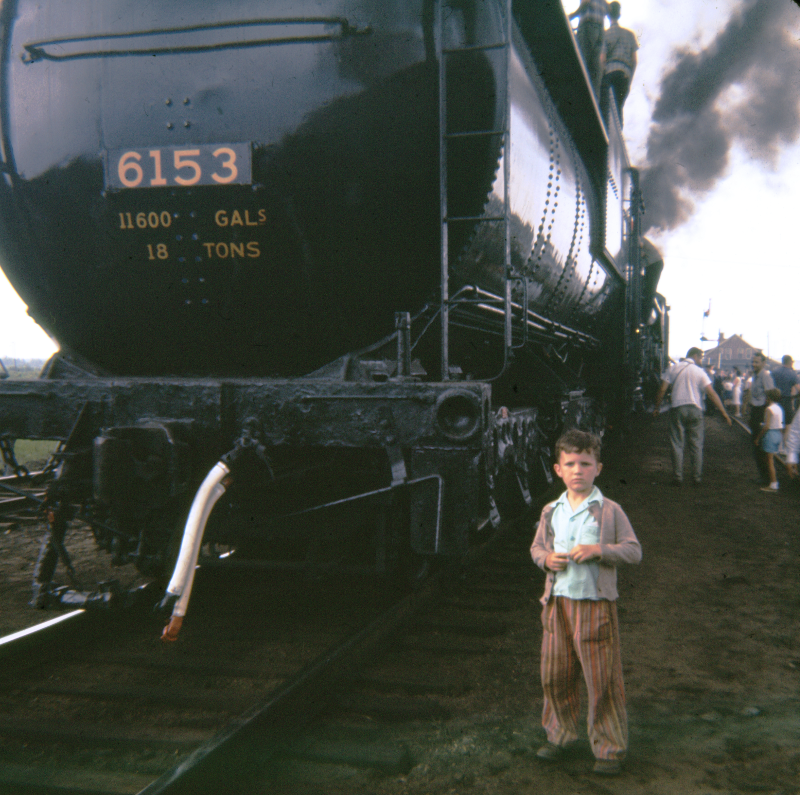 My steam 'apprenticeship' was done during the golden age of CRHA fantrips out of Montreal.

My first excursion was this 5107/6153 doubleheader from Montreal to Garneau ...
with my father, on hot and muggy St Jean Baptiste Day (as it was then known) 1962.
Here at Garneau, coaling took place with a clamshell bucket.

Please review and 'like' my personal clothing line:
'CottonWaste for Urchin' - featuring creosote and cinderdust in every piece. 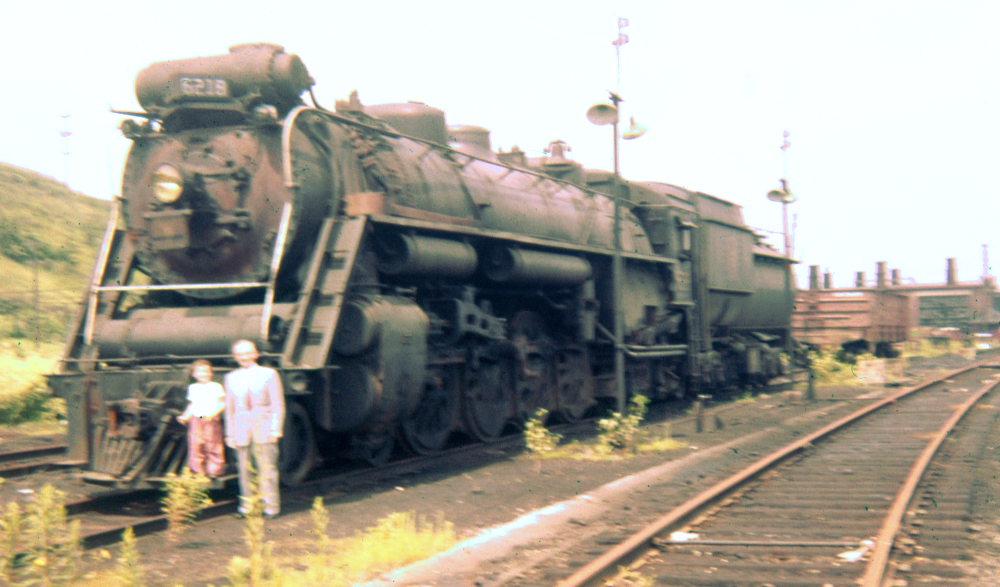 On July 17, 1961, my grandfather and I pose with an odd engine - it was separate from the 'deadlines' for scrapping - at Turcot Yard. The slide film in the point and shoot camera is 'drug store Ektachrome' - notorious for washing out to an almost uniform brown.

Articles in the Montreal Star about the engines stored at Turcot before scrapping encouraged our MTC bus trip to Upper Lachine Road. We zig-zagged our way down the workers' path to the yard and this was the very first engine we ever encountered at Turcot.

We visited Turcot two or three more times on weekends during this period and always found the facility deserted.