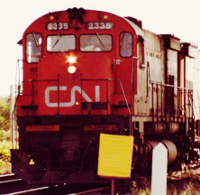 I was probably surprised by this freight coming down the hill to the Kingston station and by its unusual consist. These ore cars are loaded with slag, a waste of steel refining ... or other metal smelting. 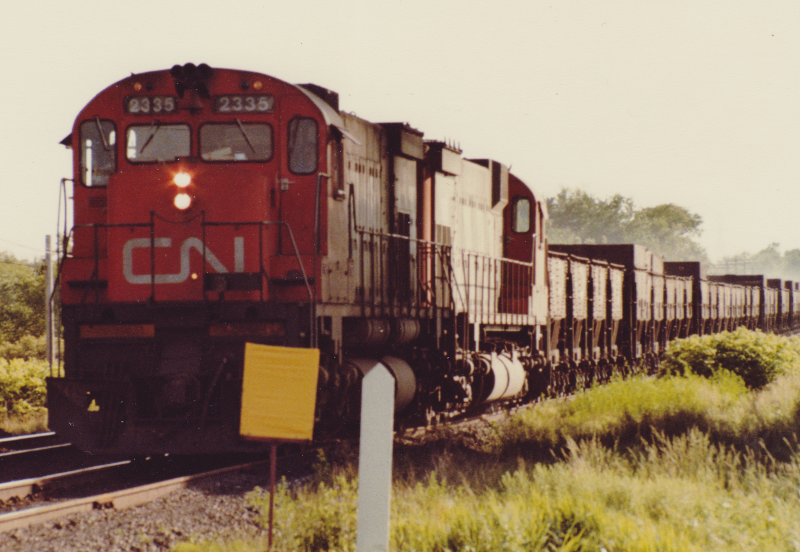 A Harsco PDF on artificial aggregates from 2009 stated:

A rail ballast needs to be cubical in shape with a high angle of internal friction and high aggregate interlocking characteristics. This is particularly important on track curves, where the lateral forces on the track can be very high and the ballast is the structural element which maintains the longitudinal alignment.

Ballast slag often has bubbles in it, or it may have a satisfying 'ringing' sound - suggesting metallic content.

The 2300s had distinctive characteristics which often endeared them to trackside observers:

Unfortunately, most of these photos were shot into the direction of the sun. 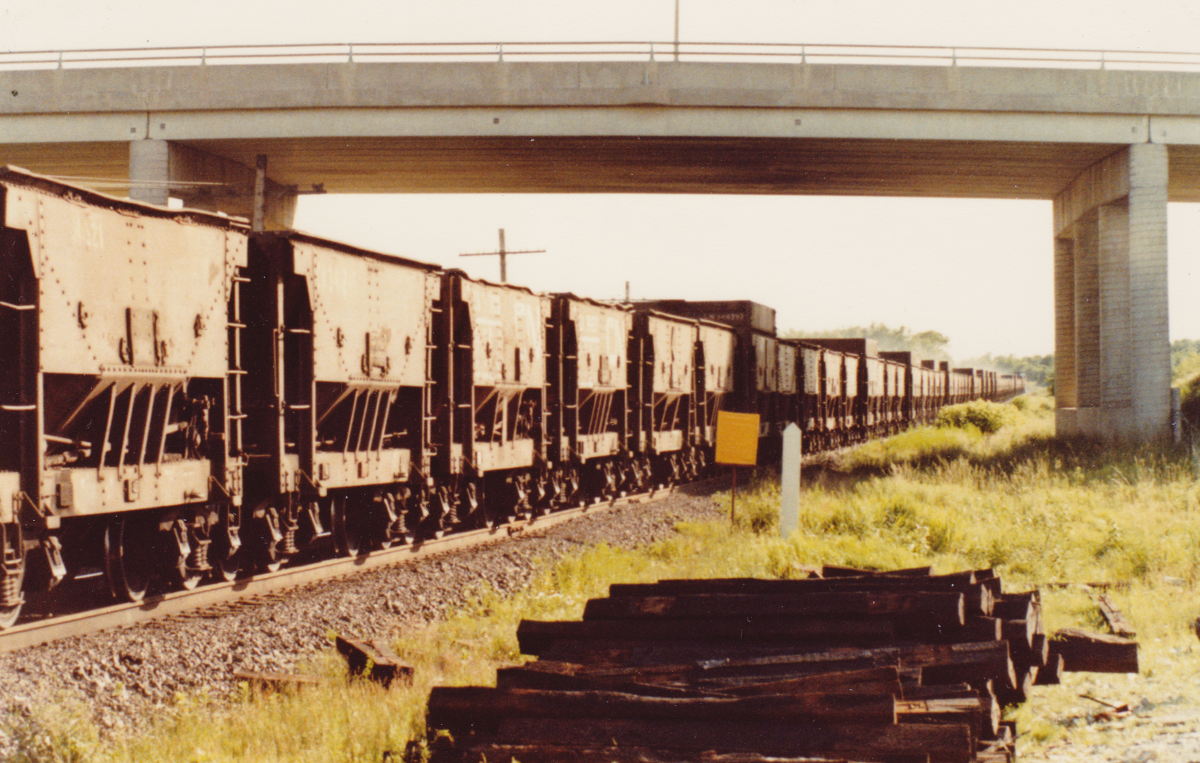 I don't believe that the slag is so fresh that it is steaming. I think the long slide into Queens Track 4 is generating a lot of brake smoke. On the tailend you can see the expected caboose. I believe a large stockpile of slag ballast was kept in Brockville yard during these days.

We might long for the good old days of obsolete plain bearing (thus illegal for interchange) ore cars retained for captive ballast service on CN. However, I don't think they are missed ...

On one warm summer day such as this, a crew was working to apply fresh ballast to a curve near Kingston. The cars were being unloaded one-by-one in sequence. A worker would wrestle to open a single hopper (this was not even possible in all cases) and the power would be quickly radioed to pull ahead before the worker's legs became buried in ballast.

... But, when the ballast was demonstrating its 'high aggregate interlocking characteristics' so well that nothing was coming out, some magnificent severe slack action was introduced into the consist to improve the flow rate.

In particular, I remember workers scrambling eastbound on the uneven, oblique roadbed alongside the moving cars as they worked to start and stop the ballast laying process. Always having to avoid being caught between the wheels and rail, it was a hot, tiring and continually dangerous job.

The following technical images are from: 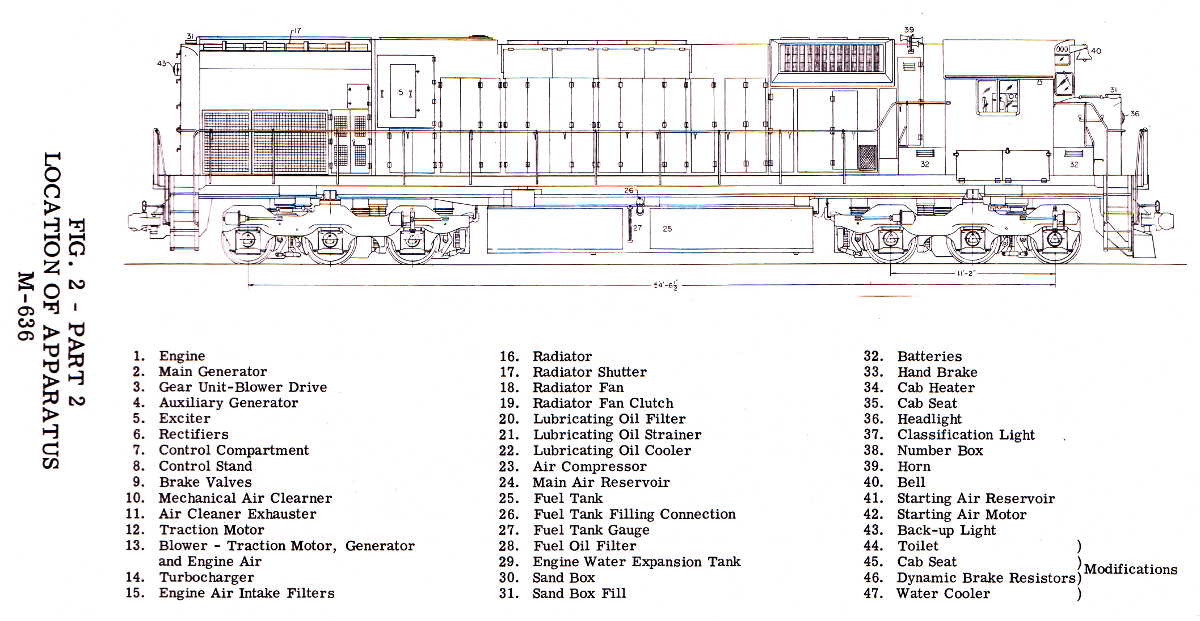 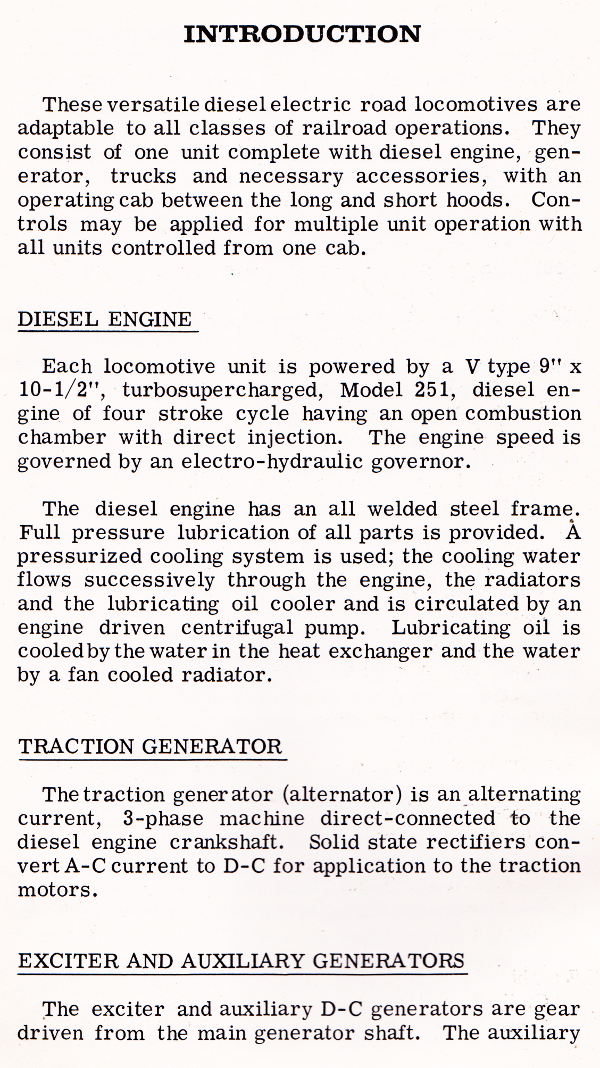 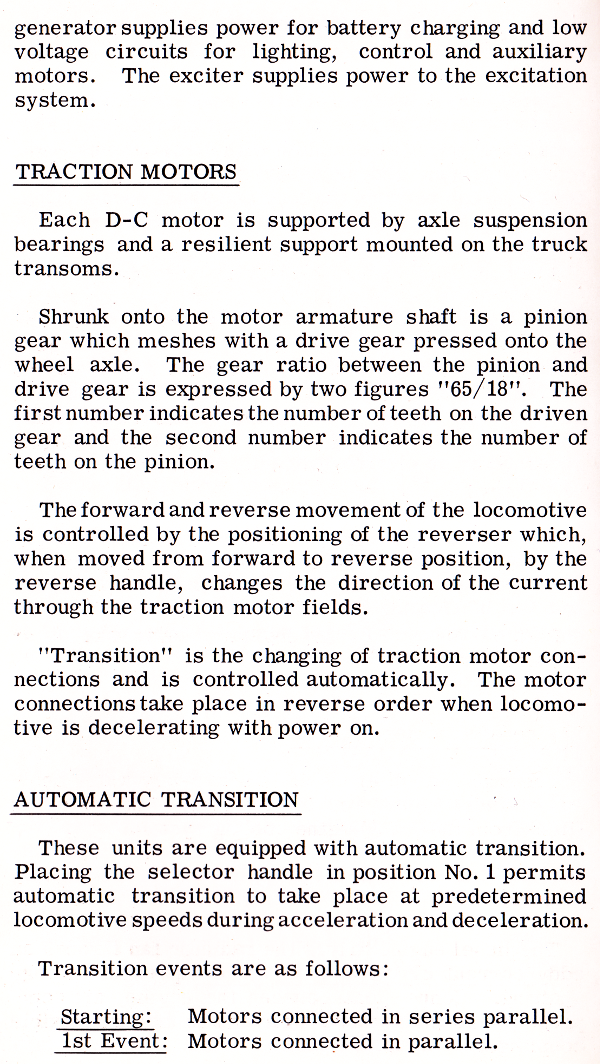 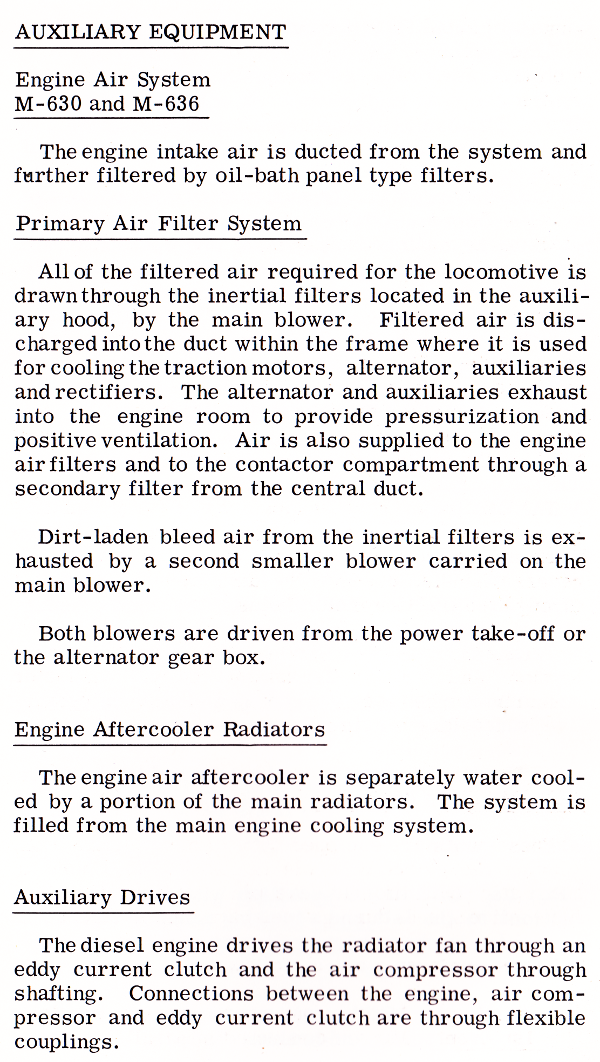 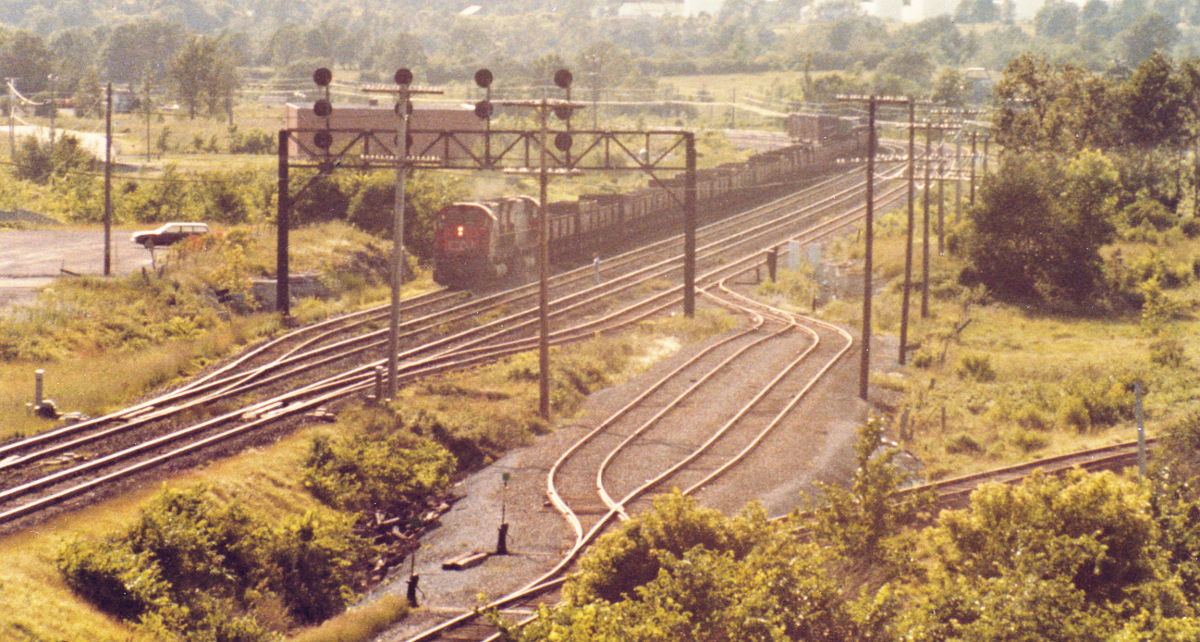 Here is a view of the same train in Queens 4. As this is a bad place to inspect a passing train, the crew member is probably just enjoying some quiet time outside the hot cab.

To the right is the CP interchange - showing different layers of ballast. Formerly, the CP tail track closest to the camera led to downtown Kingston - via an overpass over the CN main line. The track departing through the right side of the photo connected with the CP at Tichborne.

One last endearing quirk of note within the Operating Manual for the M-636 is its air starter.
The procedures are presented here for their historic value.

... Compressed air is available in quantity on the railway. It maintains its potential energy on cold winter nights better than electric batteries. 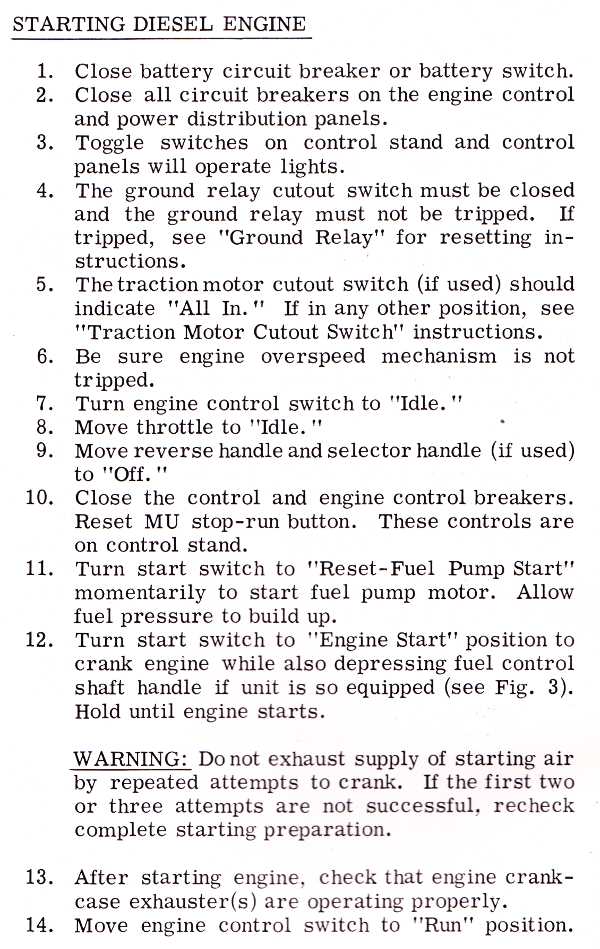 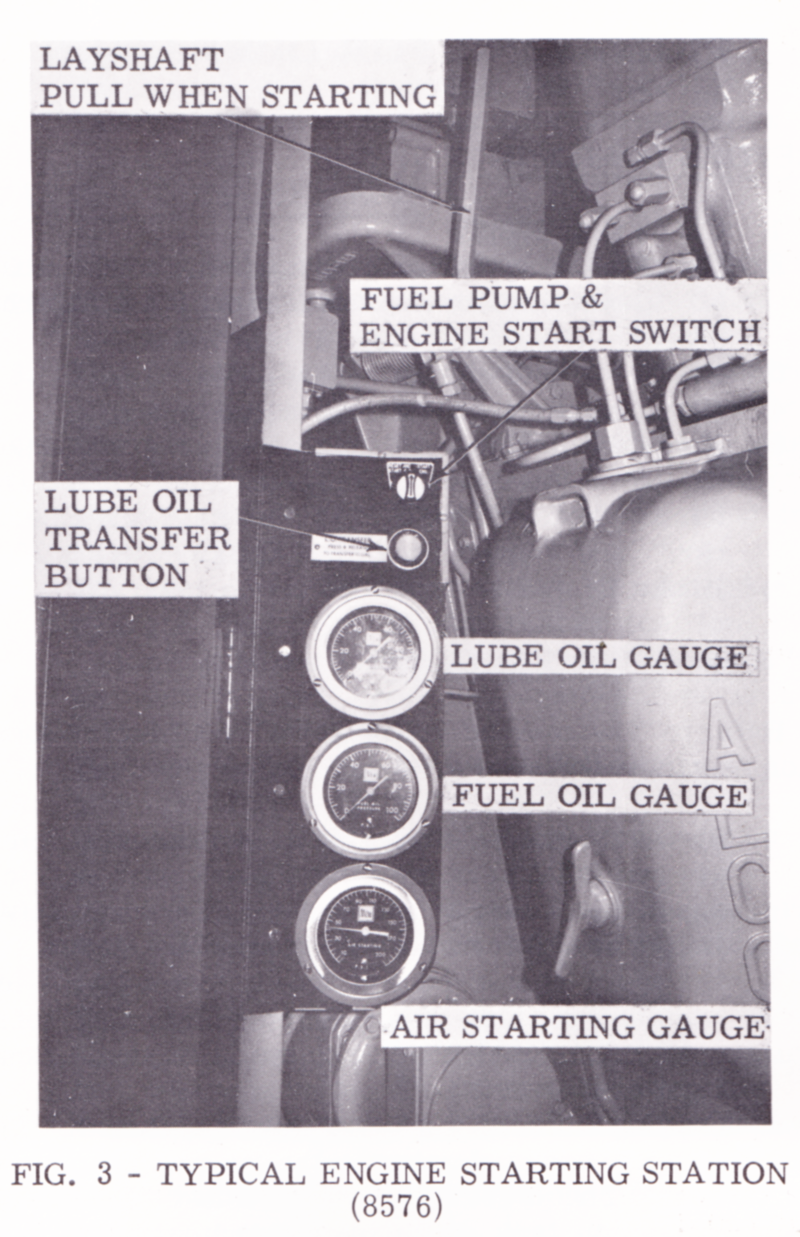 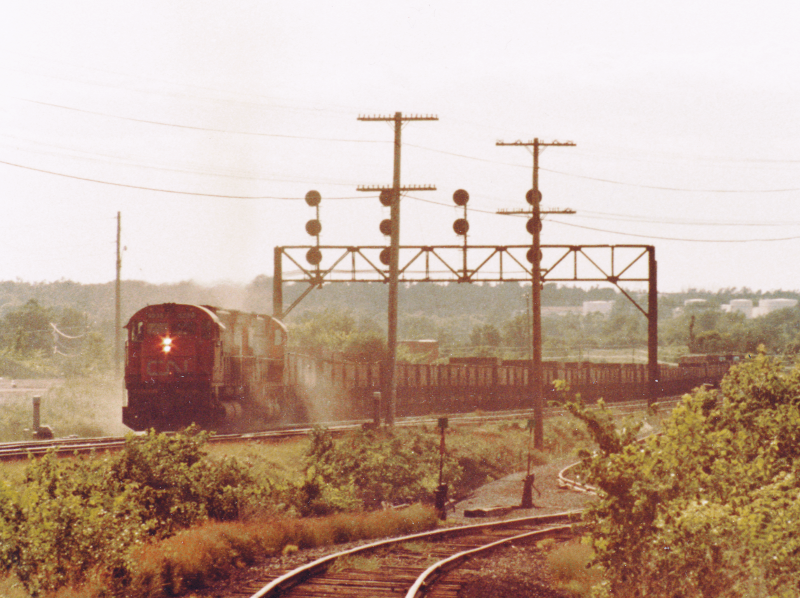 Still backlit by the sun, the ballast train starts to pull from Queens 4.
Sand, dust, and smoke from overheating parts, swirl as the power gets the train moving.

A concrete mileboard is visible in the foreground.
It is my guess that these were installed in the first decade of the CNR's operation of this former Grand Trunk trackage. 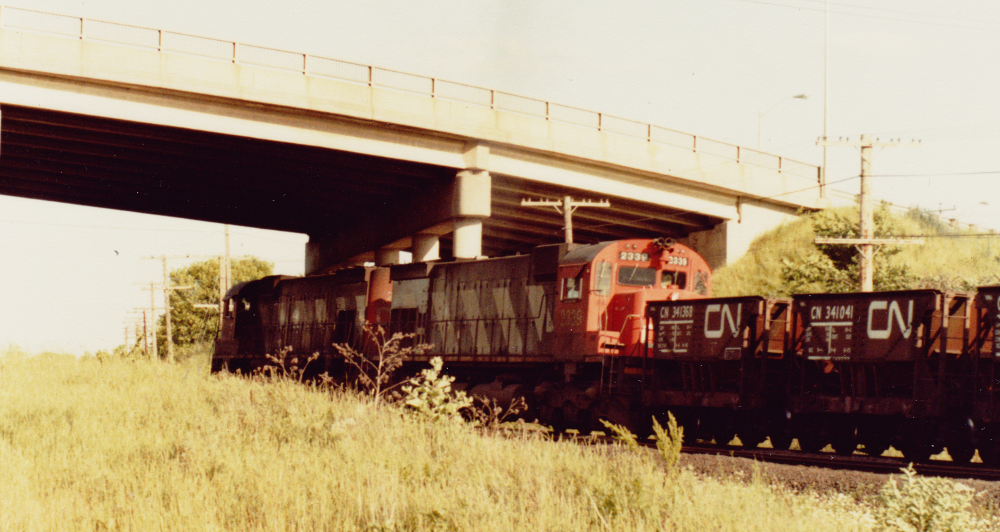 A pleasing photographic effect is produced when the sun is located behind the camera!
The train is travelling under the Division Street overpass.