Canadian Political Cartoons Around the Railway 1840-1880 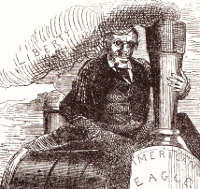 The following political cartoons come from A Caricature History of Canadian Politics - a two-volume selection of Canadian political cartoons from 1841 to 1885. The original was produced by John Wilson Bengough (1851-1923) the founder and editor of the weekly political paper Grip - named after the pet raven of the title character in Charles Dickens' Barnaby Rudge.

My copy is a 1974 reprint in a single volume which leaves out cartoons on political issues deemed to be minor and obscure in the modern era. I believe the original two-volume set is preserved at archive . org.

With the railway being the modern, fast, all-weather way to transport heavy loads ... and a key demand of virtually every British colony in North America ... most of the cartoons below are linked in some way to Canadian railways.

In the original book, the cartoons were printed on the right-hand page with a brief explanation on the left-hand page. I have connected these into a single image. 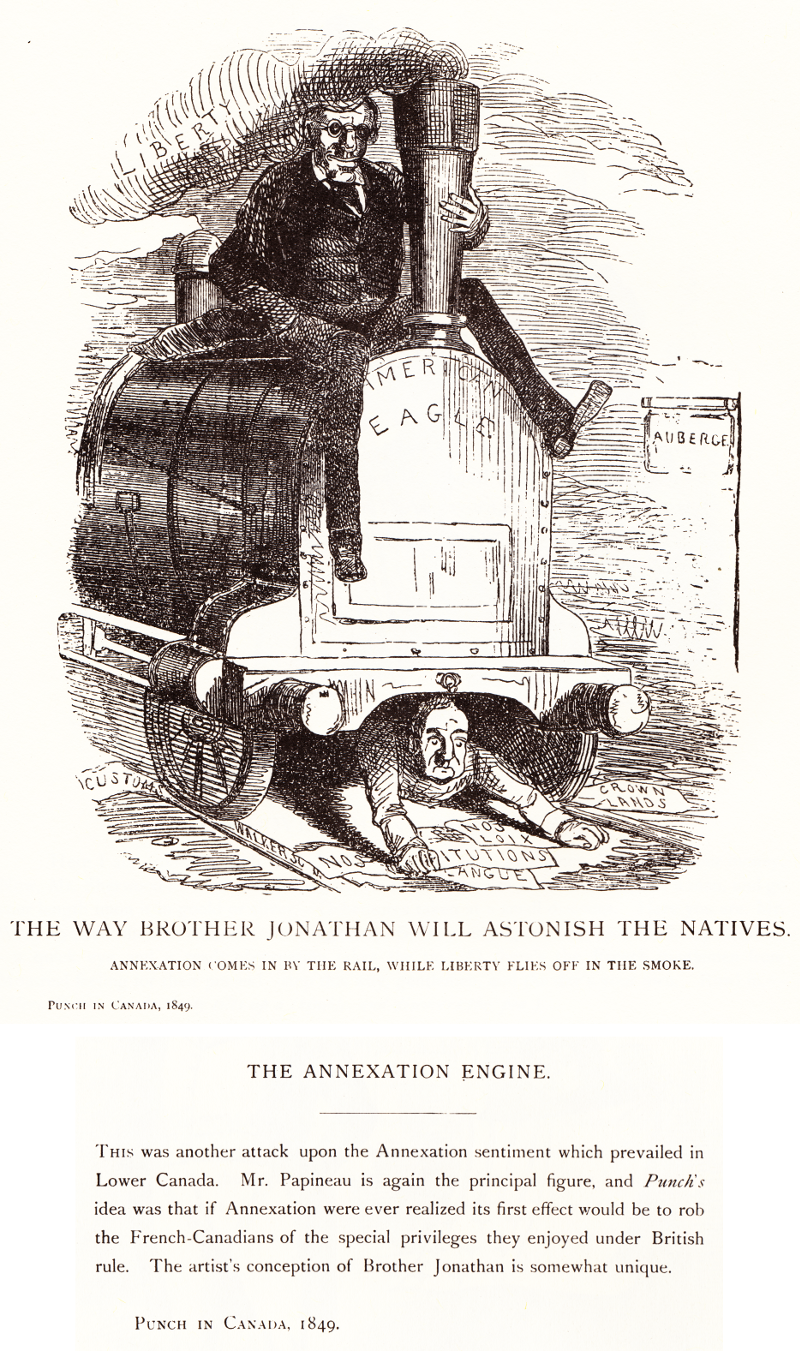 In the history of the Canadian rebellions for political reform, Papineau was more patrician that Patriote. When things heated up in late 1837, he headed for the States ... and then it was off to France. After others had made a trip to the scaffold, or the penal colony in Australia, Papineau only returned to Canada when everything was safe.

Brother Jonathan (depicted above and below) was originally a personification of New Englanders - which merged with the Uncle Sam character around the time of the War of 1812.

After New France was conquered by the British in 1759-60 - and forsaken by France - the British authorities probably had no choice but to make a deal with the Canadiens who outnumbered them along the St Lawrence River.

A contemporary Stephenson engine is shown below. 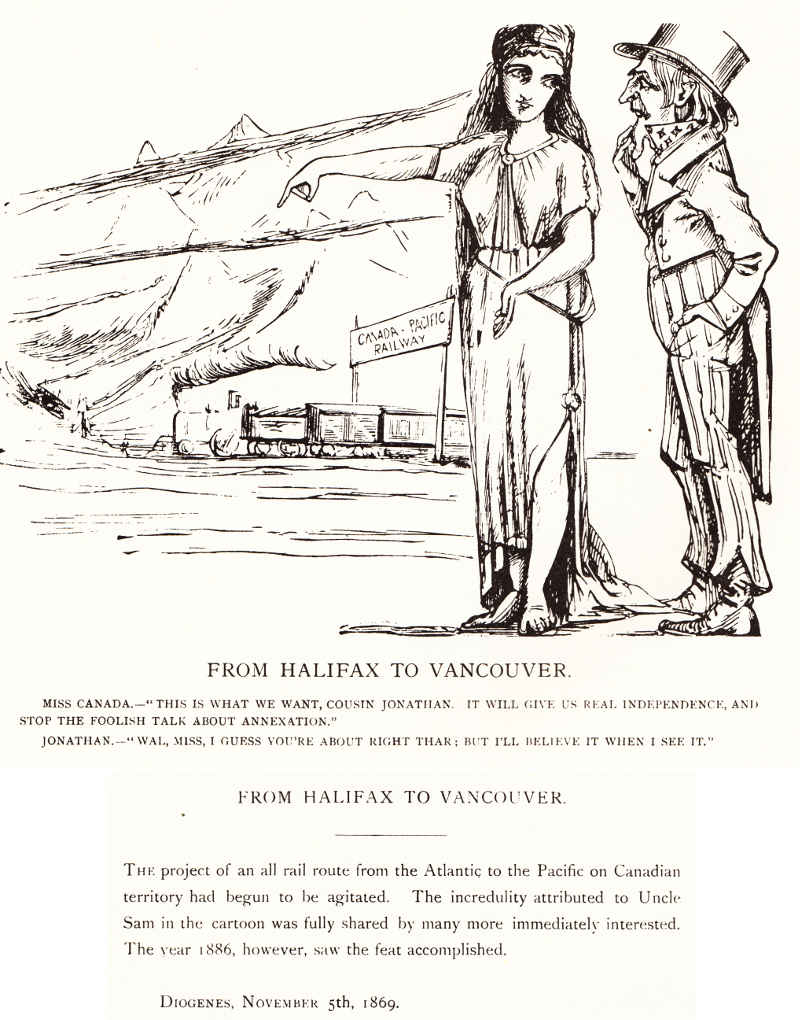 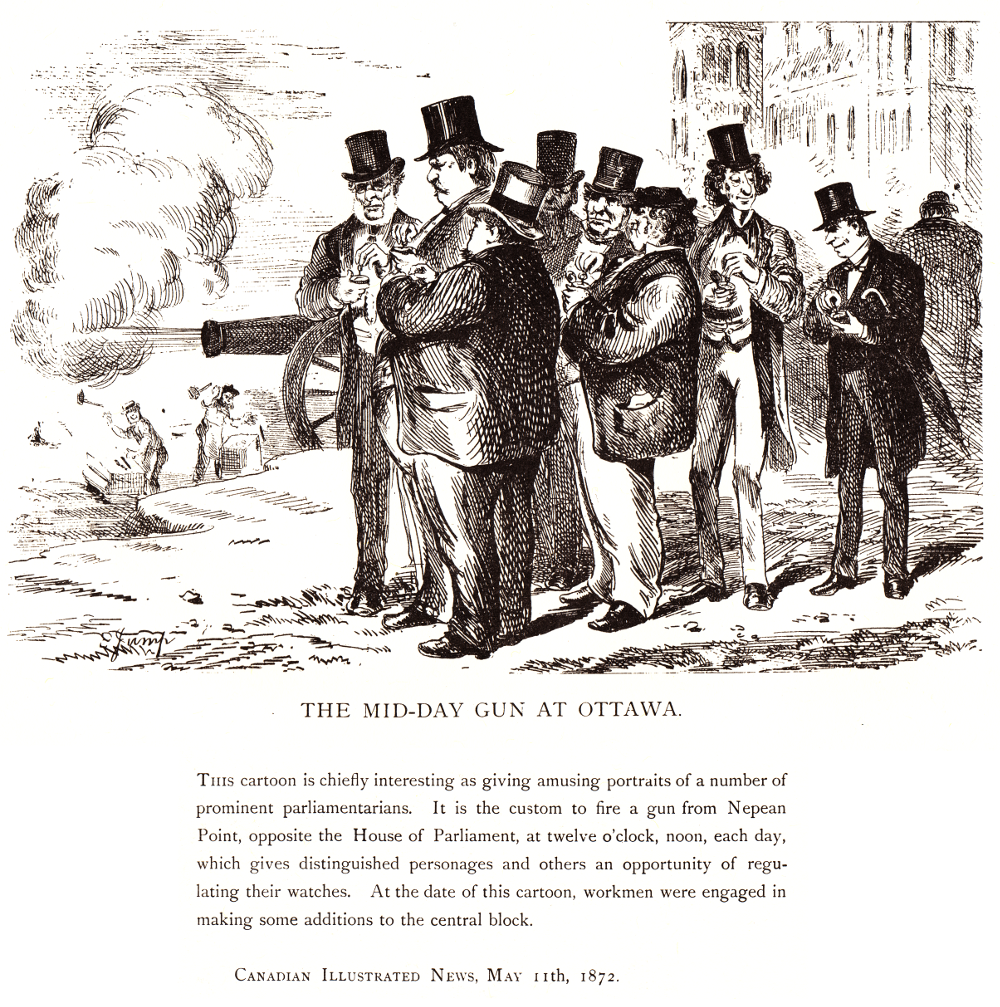 The use of Time Balls and Noon Guns is a well-worn topic of my internet efforts. Railways, the telegraph and Sandford Fleming precipitated forms of standard time. As this cartoon pre-dates the founding of the Dominion Observatory in 1902, a local solar observation or a timepiece of railway or military accuracy probably cued the gun crew.


Here is the interior of the first House of Commons in 1897 - which was destroyed in the 1916 fire. It is not clear if the flaring light is natural or produced by flash powder or electricity. This was long before the blaze of today's TV lights in the House. 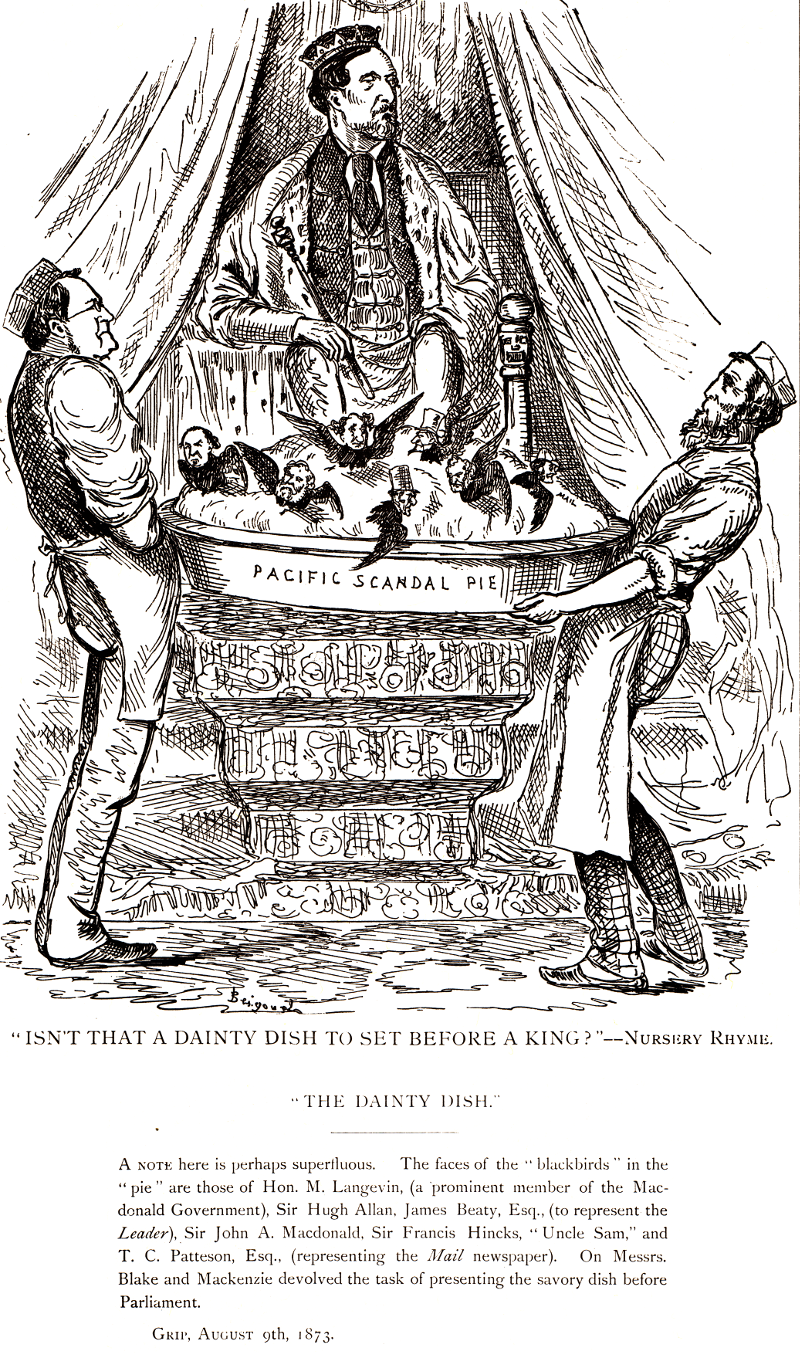 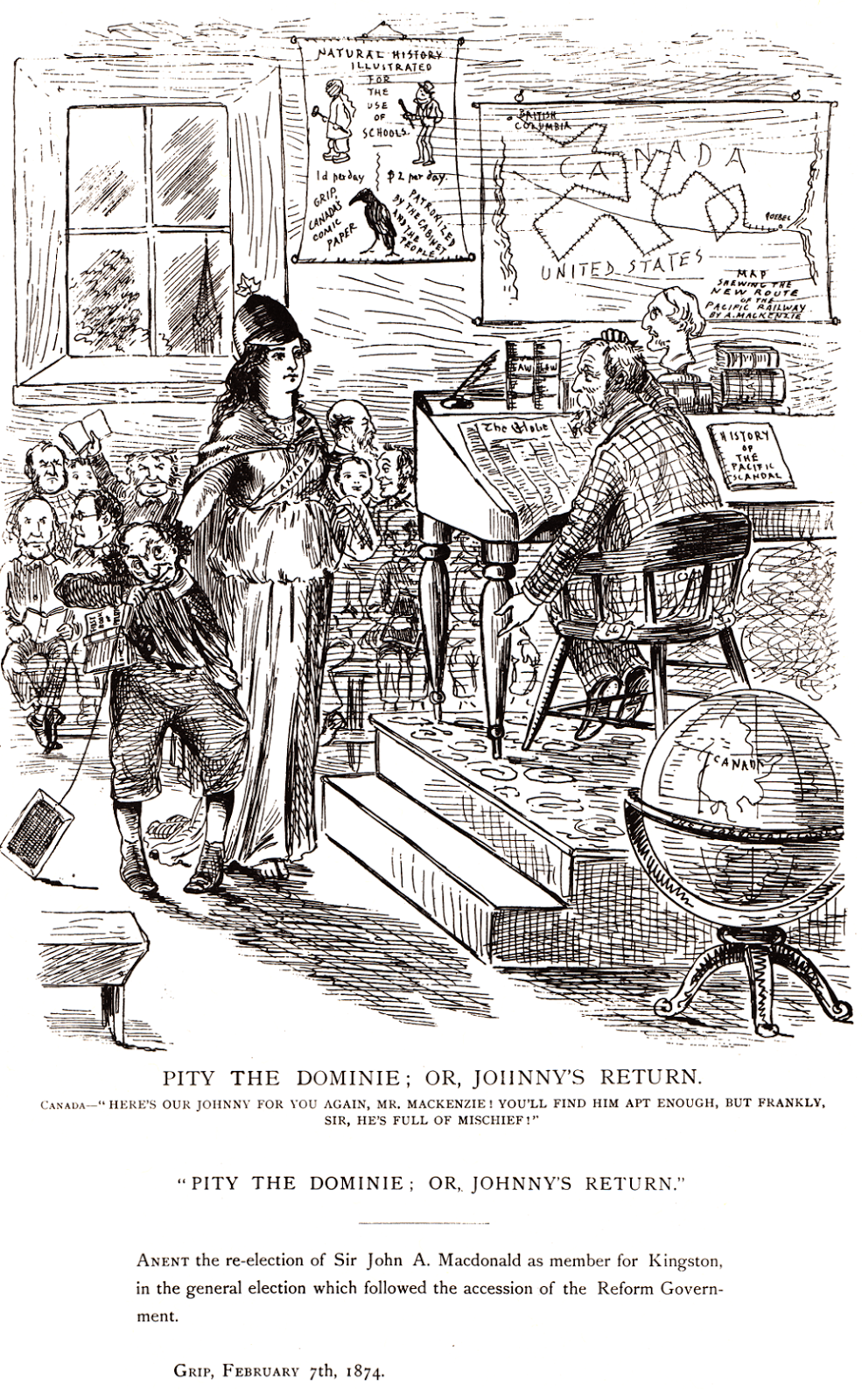 With Alexander Mackenzie as the new Canadian dominie (Scottish schoolmaster), Sir John A Macdonald returns with this new class of the House of Commons from his Kingston riding. Macdonald trails his school slate - paper was too precious in that era ... with First Book of Politic [sic] under his right arm. Mackenzie is reading the 'Reformist' Globe newspaper, which has endorsed him in the past.


(Poor old) Alexander Mackenzie - undated photo. At age 51, he became Canada's second Prime Minister, serving from 1873 until 1878. He came in with the best of intentions, was in office during a significant economic downturn and couldn't bear to spend money lavishly to build a transcontinental railway. A haphazard blend of rail, water and bush trails was his answer to those clamouring for a Pacific railway. 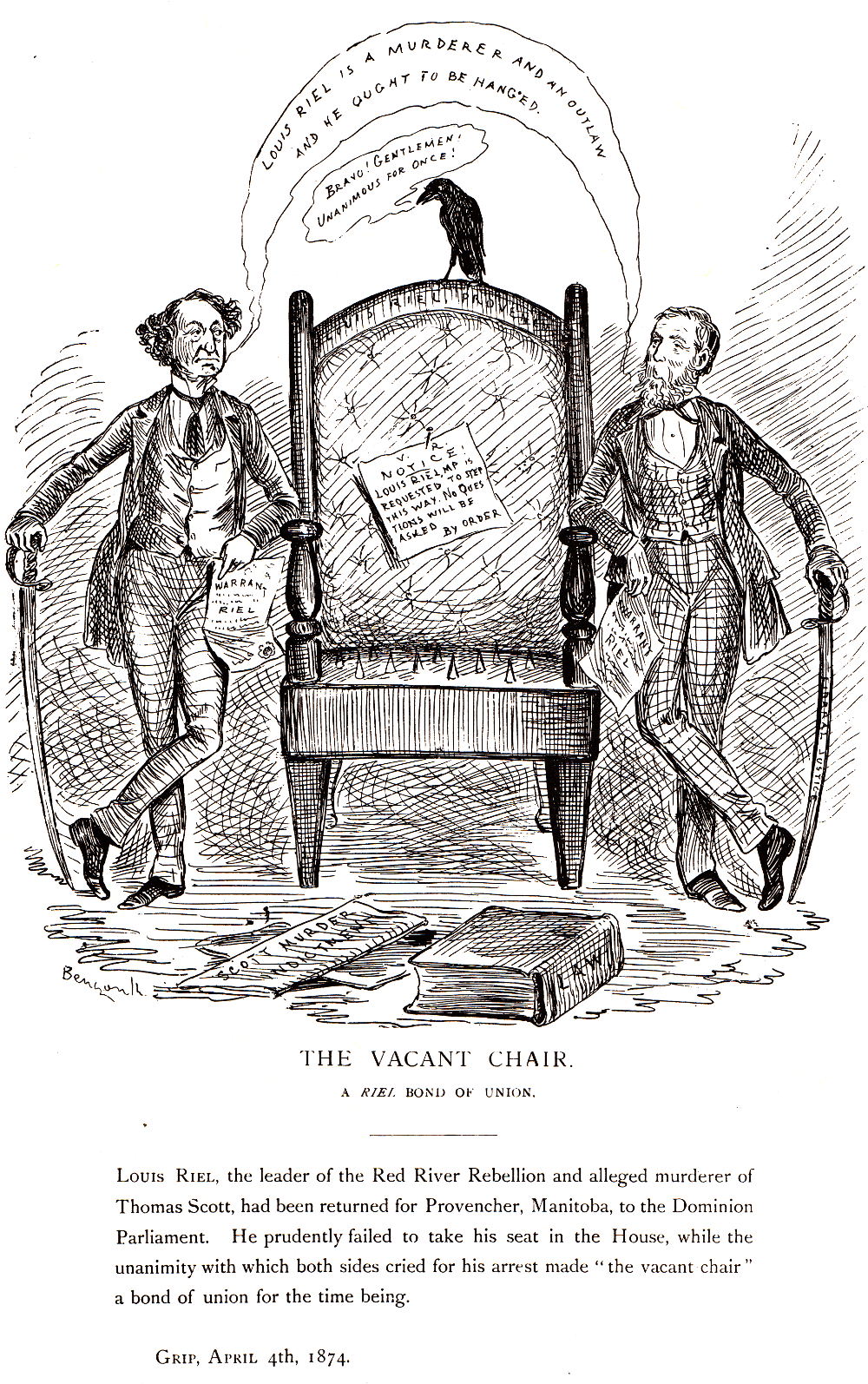 Grip perches on the chair back.

... but that was not the end of Riel, his role as MP, or his effects on the history of Canada and the Canadian Pacific Railway. 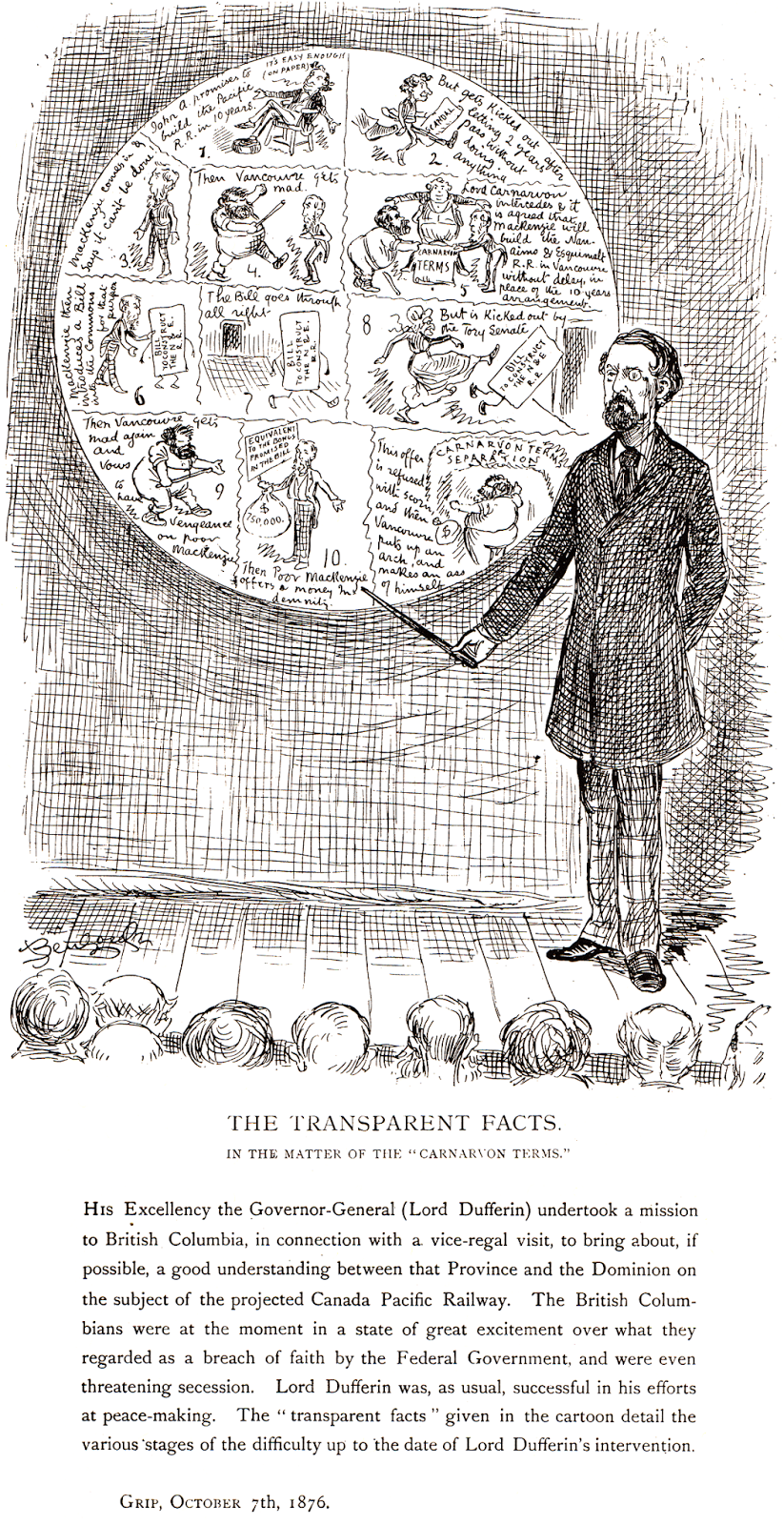 This is a wonderful panel - details below ... 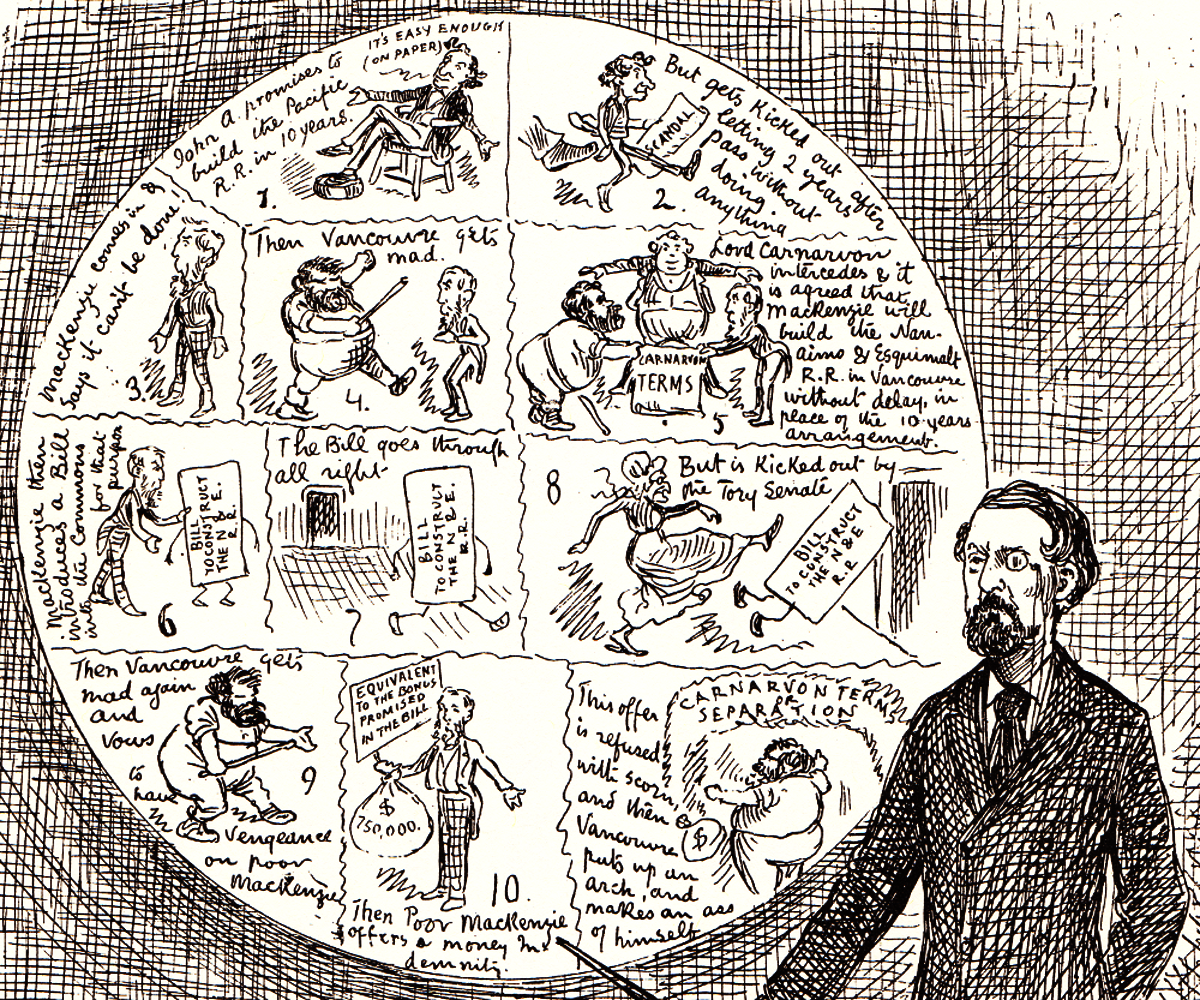 British Columbia wanted its promised telegraph line and railway. The arch was in Victoria in 1876. Notice that the cartoon shows 'Vancouvre'. Still working in the US, Van Horne was years away from naming some future place Vancouver.

This arch was prepared for the visit of Governor General Lord Dufferin. It was probably bitterly noted at the time that US railroads provided his transportation for most of the trip.

'Carnarvon Terms' referred to British Colonial Secretary Carnarvon's promise that Vancouver Island would at least get an Esquimalt to Nanaimo railway in the interim. The Governor General refused to pass under this archway - rather than condone this blackmail of a/the Canadian government. Staying on message is not a modern technique. 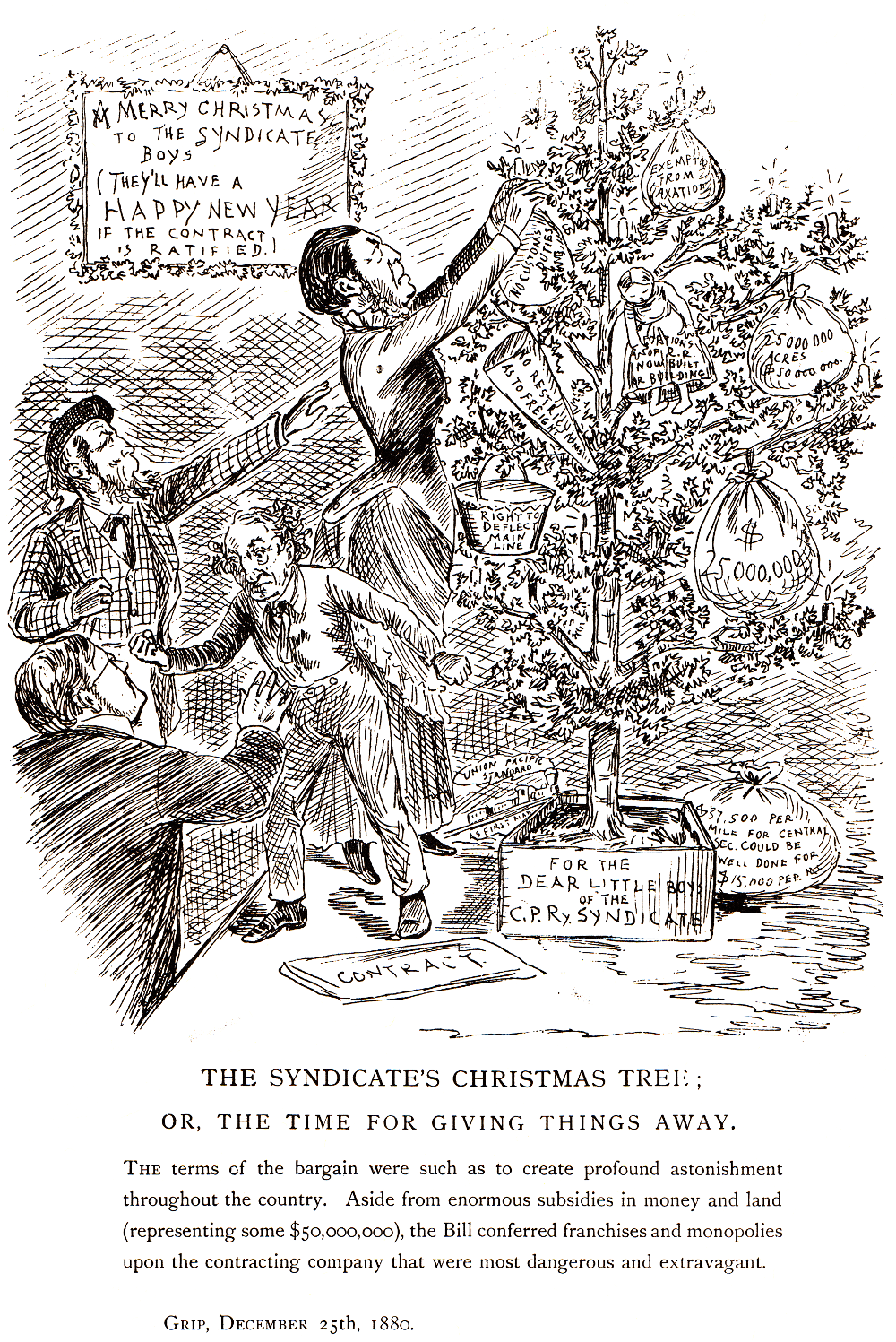 Trimming the tree is Charles Tupper - Minister of Railways and Canals. He was approached by George Stephen regarding the idea of a private syndicate to build the Pacific railway. Tupper subsequently worked to convince the Cabinet of the CPR Syndicate concept.

Edward Blake, Alexander Mackenzie's successor as Conservative leader, is kept away from the tree by Prime Minister Macdonald.